Every popular toy brand or trend inevitably leads to a glut of what I call “ancillary product,” merchandise which is related to the original toys, but ultimately just a lame cash-in. Like Transformers Walkie Talkies, G.I. Joe sleeping bags, or My Little Pony backpacks. Or school supplies. Pencils, notebooks, erasers, everything a child could use typically gets the merchandising treatment. Again, most of this stuff is lame, but occasionally one of these disposable items transcends its station.

This robot desk set (hereafter RDS) is one such item. Here’s an anonymous, non-licensed quasi-toy which succeeds on its own merits despite its forgettable nature.

I know, dear reader, that you've thought to yourself: "sure, The Enthusiast is a hell of a writer, with a finely honed literary style, but what does he sound like?" A total nerd, it turns out. Feast upon my first video review. I still need to refine the video quality, but here's my first attempt: (a no-prize for the first person to identify the intro/outro music)

The RSD has, admittedly, a very lame alt-mode. First of all, what does a “desk set” even look like? Certainly not like a half-transformed robot. But there it is, an awkward block. 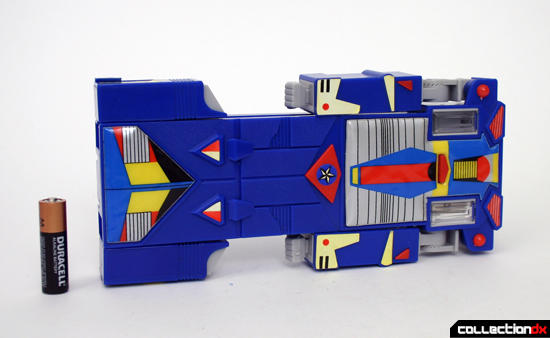 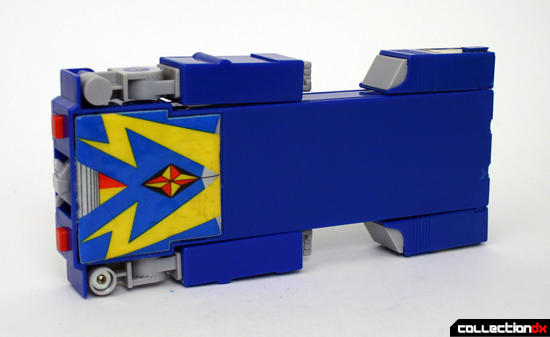 The desk set features consist of:

A pair of spring-loaded capsules which pop out of the chest. Pressing the buttons on the shoulder activate a pencil sharpener and a plain compartment. The clear tops will later look nice on the robot mode. 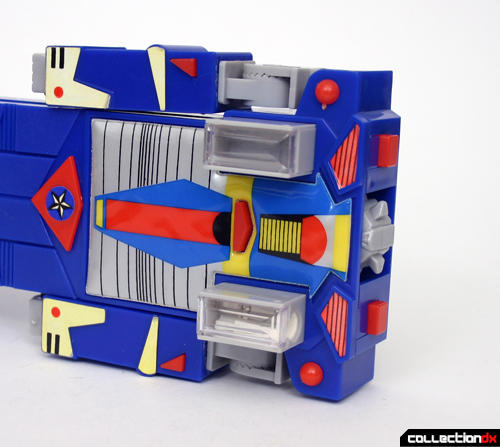 Each arm features a spring-loaded compartment. In robot mode, this has a nice Rocket Punch feel. 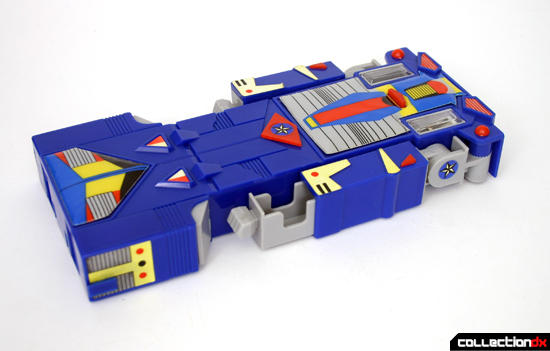 The two pods on the side slide off. Each features, yawn, another empty compartment. Kids sure need a lot of storage. 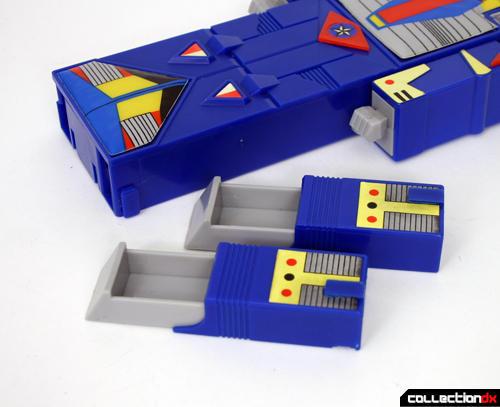 Two trays pivot out from the body. The bottom tray contains a magnifying glass. 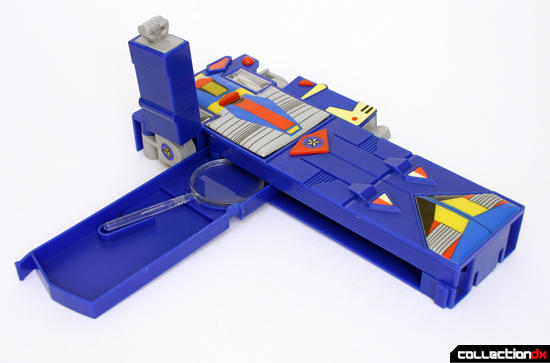 The other contains four markers. 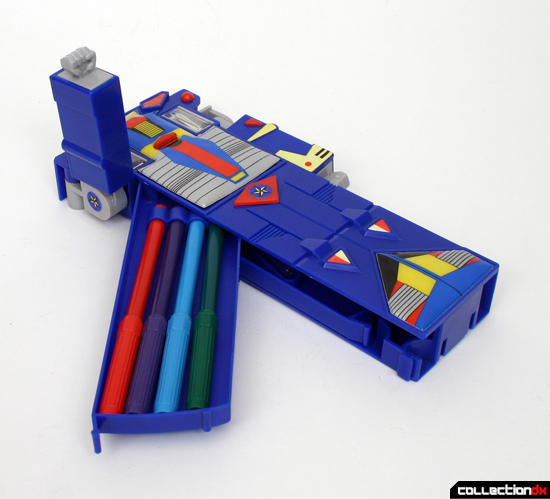 To “transform” into robot mode, one attached the side pods as feet, folds out the arms, and pops up the head with a button on the chest. 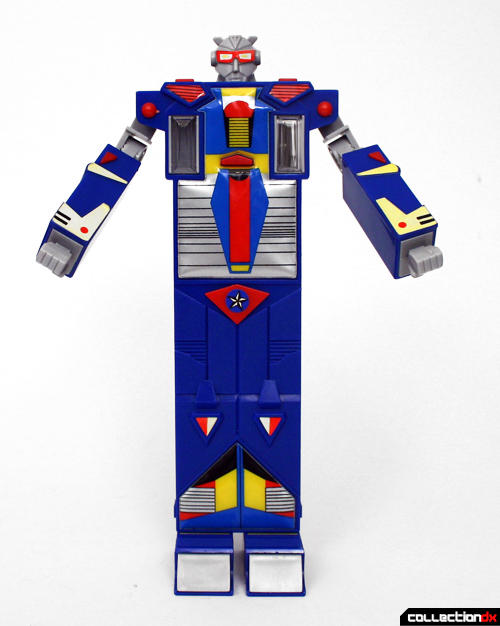 The robot mode is unusual, but surprisingly strong. The arms are well articulated, with clicky joints at the shoulders and elbows, and swivel joints at the forearms. 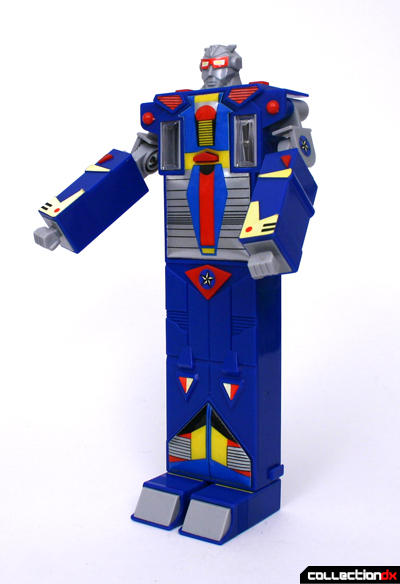 The details, sculpting, and decals are lively and sophisticated. The head reminds me of a Korean Acrobunch knockoff I once owned. Those big decals on the torso are all PUFFY STICKERS! Is this the first robot with puffy stickers? 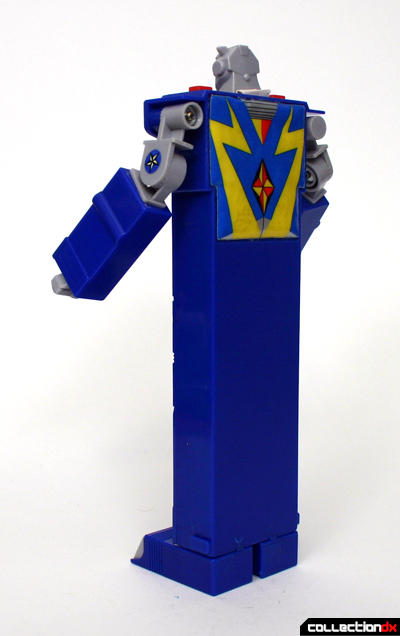 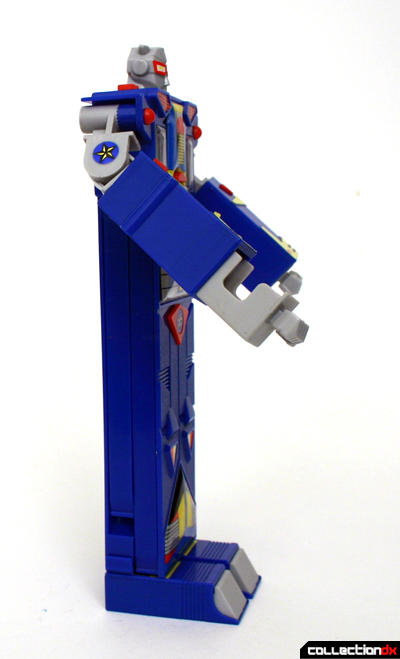 I have a real affection for this guy. What a neat, funky oddity. 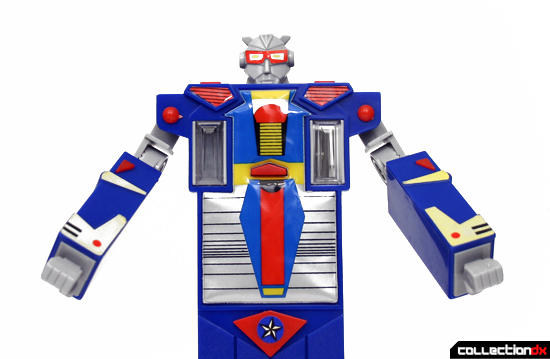 If anybody knows more about the piece I’d love to learn more about it.

When I was in the fourth and fifth grade (97 and 98), gimmicked pencil cases and desk sets like these were huge. A lot of people had ones with stuff like pop-up globes. Mine had a ratchet-dial calendar. They also had the puffy sticker covers. Mine had some sort of knock-off anime image... looking back, it may have been from a Gundam series, possibly F-91 or another of the later Tomino series.

I'd be amazed if any other extant Robot Desk Sets still have those feet components. They seem like they'd end up in the bottom of the backpack and thrown out at the end of the year...

Wow, if that toy wasn't such suck, I'd say it was an awesome idea.

Congrads on your first vid, Enthusiast!
One suggestion: watch the volume you record at in the future, please. I had to turn you waaaaaaaaay up to just hear you. You may want to try standing closer to the camera next time.

The closest thing I had to this was a line of robot dinosaurs that were also stationary items (staplers, scissors, tape) in the mid 80's.

I remember those! I had the scissors/pterodactyl. I've seen military versions now and then on eBay, including a scissors/fighter jet.

Ah, the late 80s/early 90s, when everything transformed.

I'll trade you a Combat Hero for your robot desk set.

Ent, that is dope. I need one.

Great robot I tell you...

This is robot funk that allows you to create robot funk of your own...

Kill it before it spreads!!!!

If Hasbro made Cybertronian versions of Transformers in the 80's, this could easily be Soundwave if you changed the head. He may not change into a light post, but most of the G1 figures weren't show accurate anyway...

I had one with a cool robot mode, with the Blaster transformation scheme, but changing into a photo camera. It had scissors, stappler, stationeries and other stuff like that. I´ve been googling it since forever but I couldn´t find anything