We all balked when we saw the pictures of Mattel's first shot at a classic Voltron toy. I'll admit I wasn't impressed. 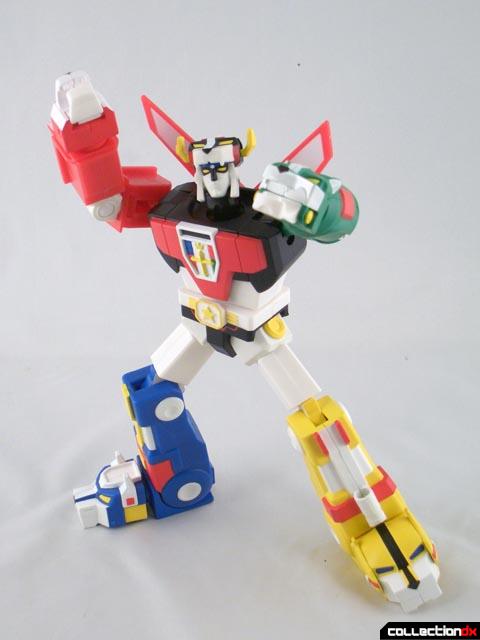 Then Mattel sent me the figure... I figured I would have to put on my "constructive criticism" hat and find tactful ways to dance around a mediocre toy, but I am happy to report the Blazing Sword Voltron is a shockingly great action figure! 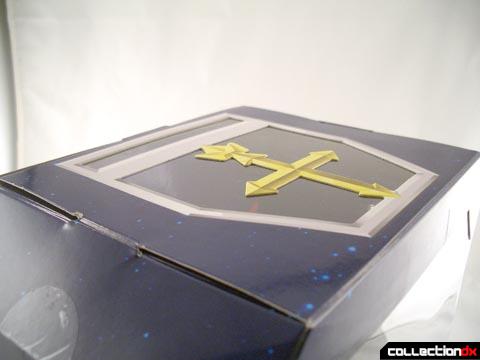 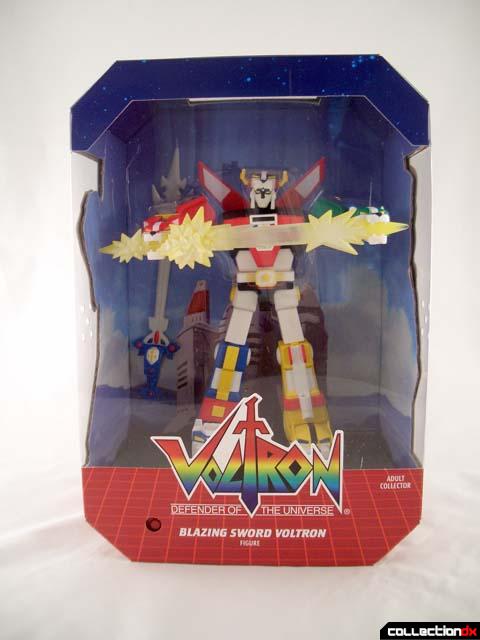 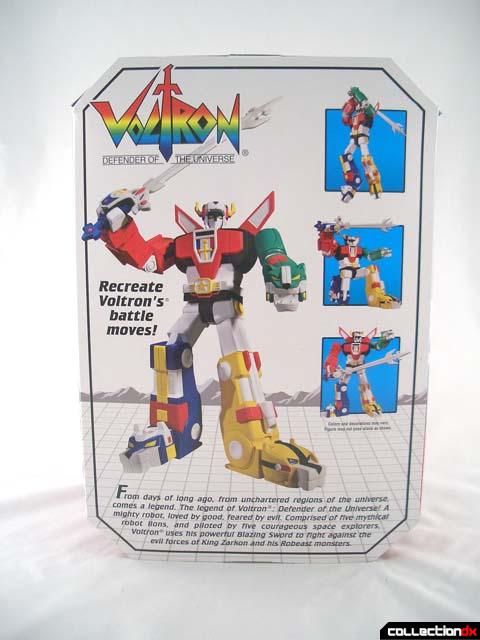 Once you get Voltron out of the package you start to realize what a nice figure Voltron is, standing at a full 8 inches tall.

Included with Voltron is a semi transparent "forming" blazing sword and the "finished" blazing sword. Both are made from a harder ABS type of plastic.

Some really disliked the low rez/animated look of Voltron but again, once out the box and in hand it suddenly clicked for me... 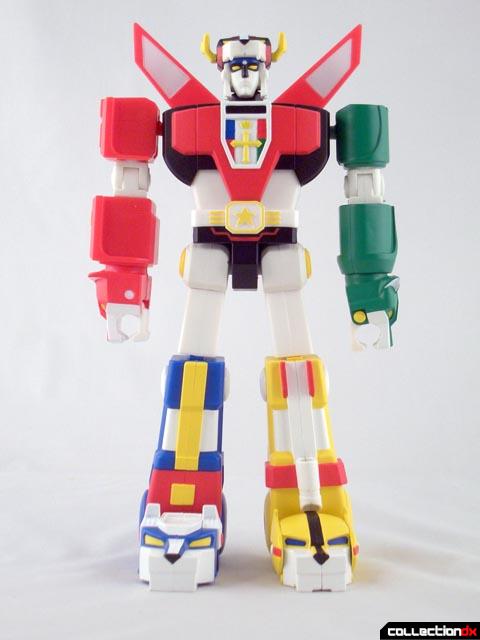 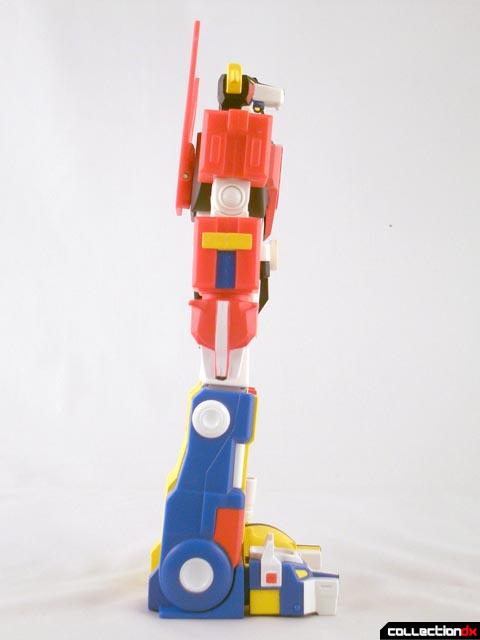 They where trying to capture more of the "soul" and "funk" of the original animated look of Voltron, and not the high-end gokin we are used to around these parts. Paint detail is sharp and clean on my sample. 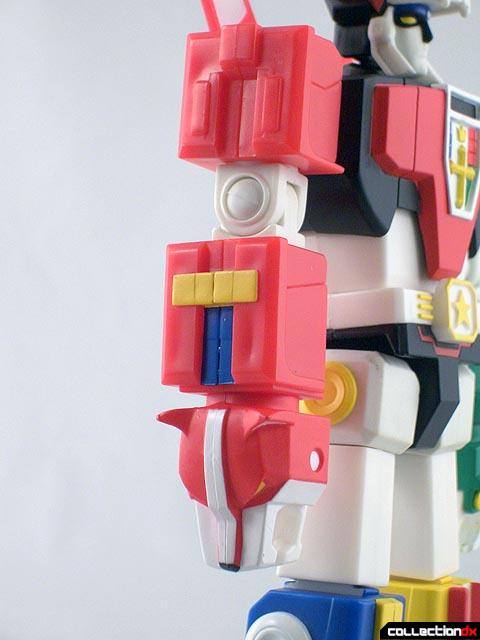 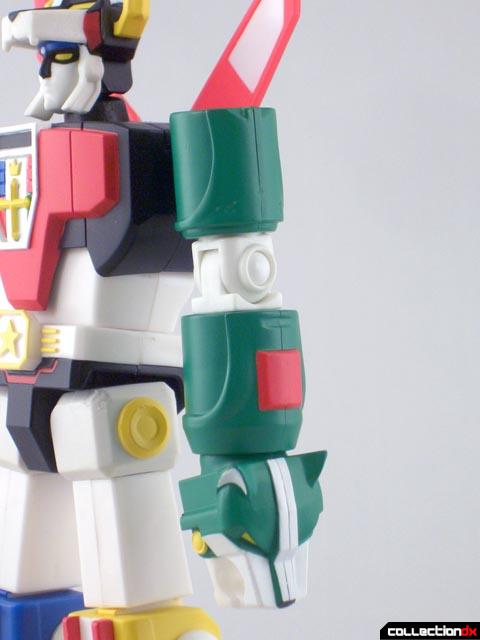 Once that settled in and I accepted it for what it was, an action figure, I started having fun with it. 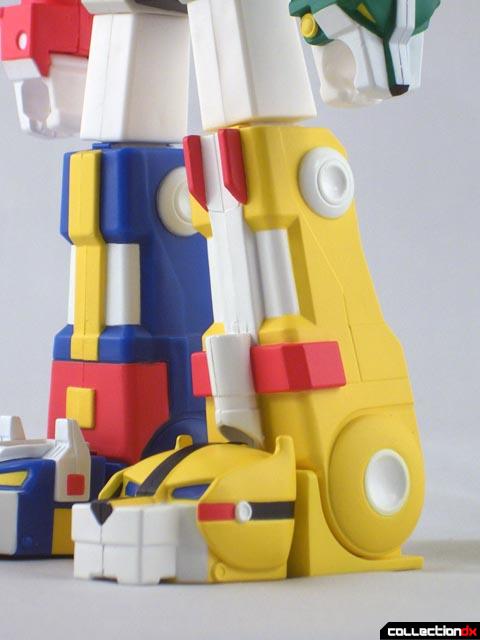 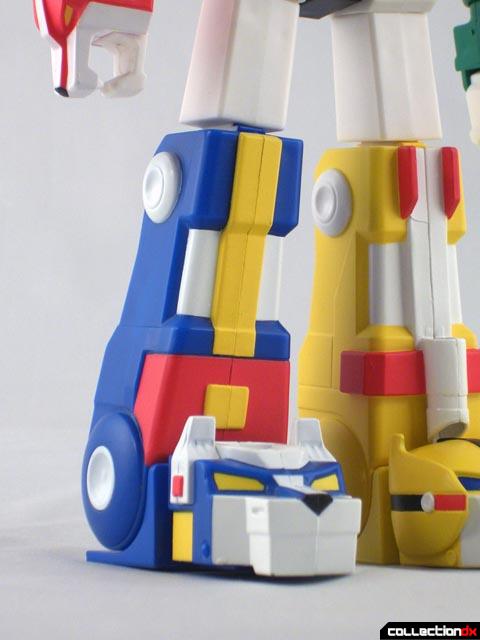 You can pull off some really dynamic poses with this guy.

As a matter of fact, I don't think I have ever been able to get Voltron's arms over his head to hold the sword with previous Voltron (or Go-Lion) pieces.

Seriously Mattel, you HAVE to take better pictures of your stuff. You did this thing no justice in your press images.

I have only one complaint. The white at the top of the hip rubs against the black part, leaving scuff marks. They rub off but it is something to be aware of when you're playing with it. Despite that I highly recommend this figure!

This figure is on sale NOW at SDCC 2011, so if youre there on the floor GRAB ONE. It really is a great toy! Not at SDCC 2011? You will be able to grab your own Blazing Sword Voltron at MattyCollector.com starting August 1st 2011.

8 comments posted
Thank you!! I was kinda on

Thank you!! I was kinda on the fence about this figure, but you've made up my mind. As you said; Mattel kinda didn't take great pics of this to really show off what it could do. You've made Mattel some money here, and helped me out. Thanks again!

Yeah Mattels press photos kinda killed it for me. But the fact that you said shockingly good, It must be great. This will be going on my shelf soon enough. Your pictures are great and make it hard to resist.

I never had a doubt it was gonna be awesome! I pre-ordered one a long time ago and should be getting it next week. I think I'm gonna try to get a second one from Matty too. Love the anime accurate colors on it, but the sword should've been silver IMO. Nothing I can't easily fix once I get it.

I still want the deluxe transformable one from the 80s, but this doesn't look too bad.

You dont own one? I thought it was mandatory to own Voltron in the 80's

Oh it was indeed mandatory. I even got to handle one a few times. But I still never got one.

If I could get that all-plastic Masterpiece Voltron from a few years ago (for me die-cast is NOT mandatory, just a quaint bonus feature), I'd go that route over the original Deluxe.

But I still want a big fully-transformable version of Voltron. Not because I liked the show (on the contrary, I didn't see any of it when I was younger, and nowadays I can't stomach even the first few episodes), but because it is iconic, and I have to have one because it was cool back then and I still have a liking for it now.

Thanks for the good review. Covered all the bases nicely. It also helped me decide whether or not to pick one up.

Having him in hand he's definitely a lot of fun. I also dig the packaging he comes in, but due to the fact they used industrial grade glue to weld it together it takes a box cutter and much patience to free the mighty robot. I think that's short sighted on behalf of Mattel for those who want to keep the box (it even says "adult collector" on the box), but none the less I'm glad to have him.

I picked up this guy purely based on this review and I have to say thank you. I love this figure. You are spot on!