Although the Matchbox produced Robotech Defense Force line of 3 ¾ action figures and accessories series of toys was generally a huge let down for kids and collectors, I do have to hand it to Matchbox for importing and repackaging original Japanese Takatoku toys to markets outside Japan. I mean, how cool was it to walk into a Target, Toys R Us or K-Mart and buy a die-cast Takatoku Macross toy right off the shelf for less than $8.00? It was fantastic! 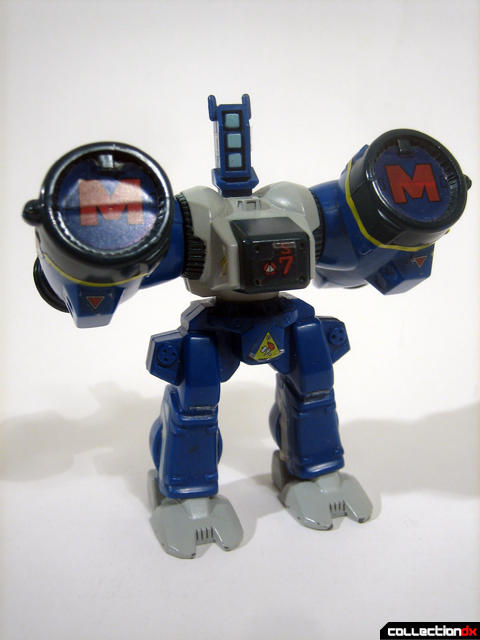 Without Matchbox’s involvement, we would not have had domestic versions of Destroid Monster, various Destroid Battloids, and a beautiful transforming SDF-1 Macross and various other Macross related toys. Most of these toys were released under the banner “Robotech Collector Series Die cast” even though some of the products released under that banner had little, if not any, die-cast in the product, such as the transforming Macross SDF-1. 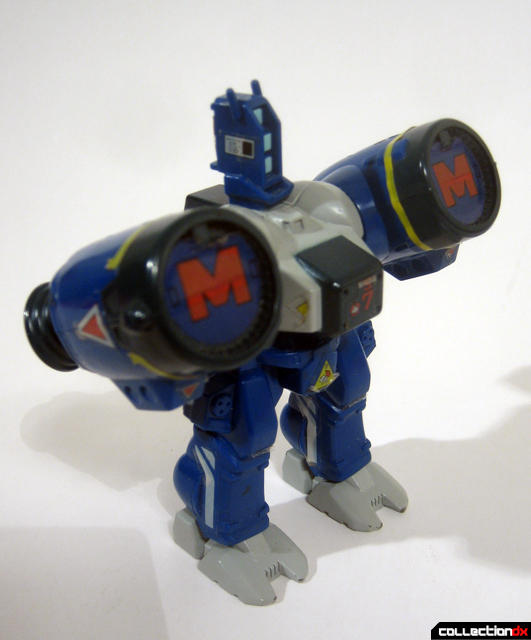 I received my Matchbox Spartan Destroid for Christmas sometime around 1987. Life has given me Phalanx figures and I am quite happy to have received them throughout the years, as I quite like the little guy. Often seen as cannon fodder in Super Dimensional Space Fortress Macross, the Phalanx always put up a brave and heroic fight throughout the series. 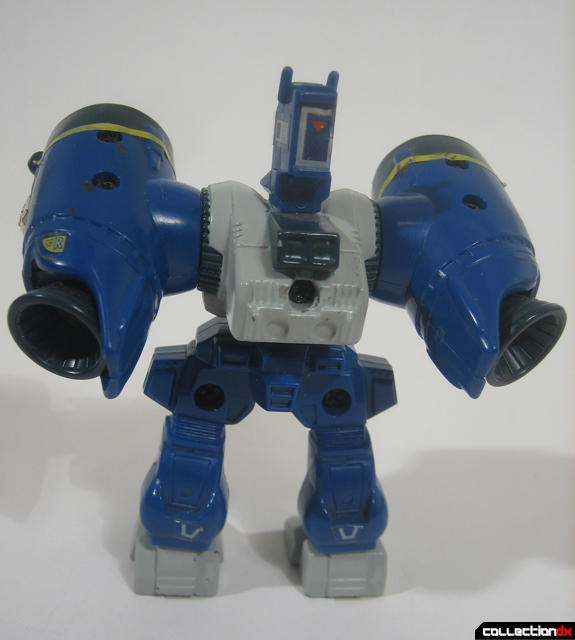 C’mon now, how many of you have shed a tear when in episode 27 “Love Drifts Away” when a unit of modified blue Phalanx’s peek out of the Macross and coordinate their missile launcher hatches and launch a gazillion missile salvo attack and proceed to take out Boddole Zer’s Dimensional Fortress from the inside while Minmei is singing her little heart out. That was perhaps one of the finest dramatic and tensioned filled moments in all of Macross. Not only that I always thought the huge "M"s were cool.

One aspect I did not like that Matchbox did was changing the names of the Destroids around. I think this was more Harmony Gold’s doing rather than Matchbox. Other than unknown legal trademark and copyright reasons I did not see any reason for Harmony Gold to change the names around as it was confusing to memorize all the different names from Macross to Robotech as a kid. For the rest of the review I will refer to this figure in the original Japanese Macross name of Phalanx, although it was marketed by Matchbox as Spartan here in the USA. 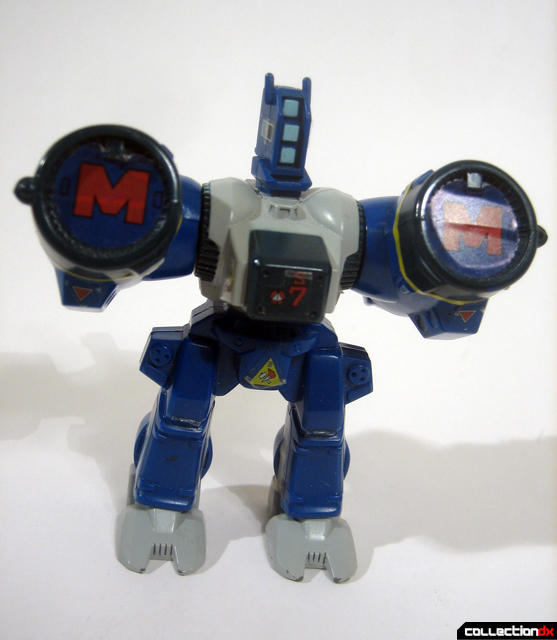 Matchbox released two versions of each Battloid, one set in the original and correct to anime Takatoku colors and another set recolored in new fantasy colors. I believe that the Phalanx was the best recolor of the set as the colors hint at Episode 27 “Love Drifts Away” Phalanx’s in deep dark blue. The color choices compliment each other and looks quite good even though the scheme was never seen in the anime. The other three Destroids were not so lucky, two being produced in white and the Spartan painted in a dreadful day-glow orange. 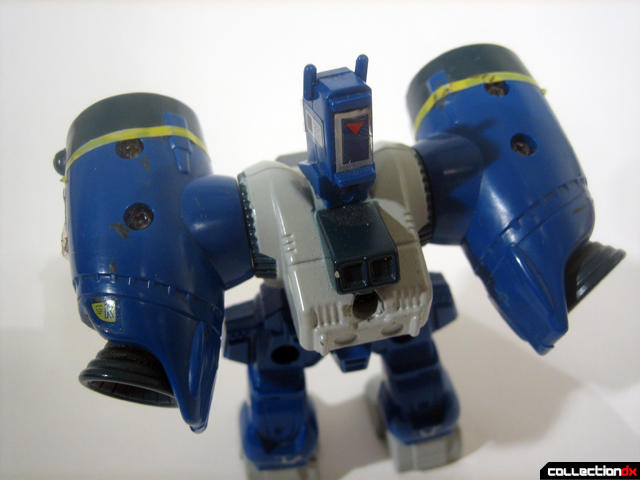 Die-cast includes body and legs, with the “arms” and head molded in plastic. The Phalanx is a small size but has a quite a hefty weight for its size due to the 75% die cast content of the figure. Articulation is limited, the missile launchers can be adjusted and the head searchlights and waist can be turned left and right. My only complaint is the four exposed screws on the top of the missile launchers which detract from the overall look of the figure. 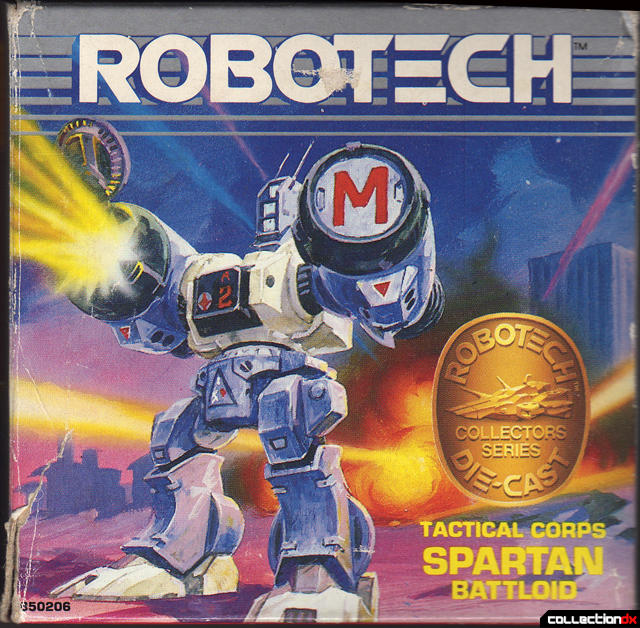 One aspect of these Matchbox figures I did like was the very dramatic oil painting on the packaging of the Phalanx in action heroically defending a large city from its inevitable destruction. I wish I could view the uncropped original art without the lettering as it is a well-executed work of art. Whoever the unnamed artist is, you captured the passion and drama of Macross/Robotech beautifully. Thank you! 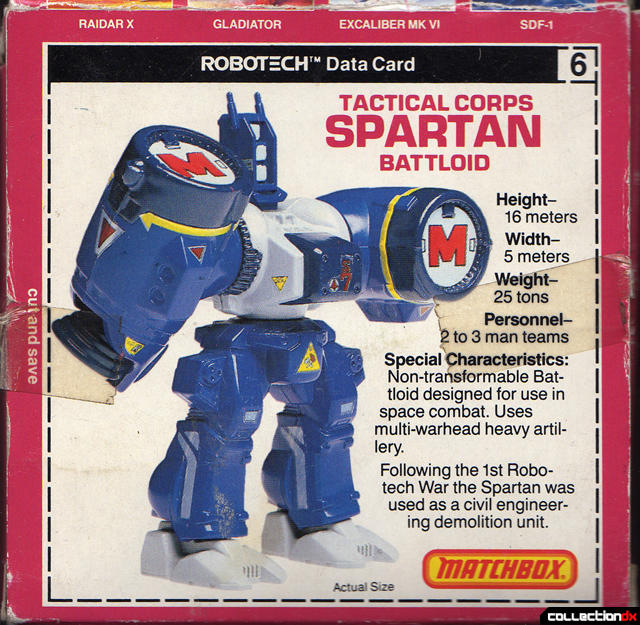 I am not sure how much these are selling for on the market these days but it is a great little pick up for the Macross/Robotech collection and a nice recolor of a classic Takatoku figure that was never available in the original Japanese market.

Nice review. Silly kid I was, I didn't know to get more of these then.
I only remember the drab tan colors, glad to know of the variant colors too.

I sure remember thinking these were so big and solid, compared to other popular robot toys of the day.

Yes, that box art would be great available as a complete print!

What a disappointment that those missile launchers don't do anything. That oil painting really sells the toy and yet the toy isn't able to open the hatches and doesn't fire projectiles? That would be a real bummer at any age.

To be fair, the box picture is kind of a trace-job off of the Imai Phalanx box.

You all make great points:

I was noticing after I made the review that the hatches didn't open, which now I would think as a let down but as I kid I thought it was the coolest figure and didn't even notice it.

A trace job it might be but the energy of the painting really projects. We've all seen trace jobs of mechs before but there is a lot more to this painting the simply tracing something. Check out the Comico Robotech comic books and see how passionless a trace job could be.

AHHH!!! PLEAZE don't remind me that I didn't pick up more of these as well!!! I'm sure if I asked my parents they would have picked them all up for me. If I could only go back to the 1980's for the weekend.

Thanks for the comments everyone!
LF

Comico did the best they could with translateing Robotech into comic book form. Recall that when they started, the plan at Harmony Gold was just a strait Macross translation (Comico released Macross #1, the company never released Robotech #1) but by the time the second issue came around HG had optioned the Robotech name, Southerncross, and Mospeada and started production of the show. Comico was then left with trying to put three books out at once under deadline with artist unaccustomed with anime/manga style

I gave away all my Comico Robotech comics about a year ago although still own that Macross #1 as at the time it was the most expensive comic I ever bough ($20.00!) which was a lot of money for a comic book which were 60 to 75 cents a pop at the time. Macross #1 was a beautiful and well drawn and painted comic and the rest of the comic series had those high standards it would of been a great series. But the artists were terrible! Reggie Beyers had his own manga style comic called Shuriken but his art did not translate well with Robotech. Last year I thought "Why do I still have these...I hated them!" but kept a few choice pieces such as Macross #1 and the 3D issue. I also kept an autographed issue and a page of original Comico ink and art that was used in the third issue The New Generation I picked up at the SD Comicon back in the 8T's.

I wonder why they just didn't hire Japanese artists, but this was the early days of "Japanimation" people were still trying to figure things out.

Opening hatches? How could I miss that? I distinctly remember the regular tan colored version had opening hatches, but only a cluster of red missle tips molded inside, that didn't actually come out, or fire off.
Must be this blue version has just the sticker on the arm pod?

Yeah, the bigger plastic ones (that were later reissued under the Exosquad) line had opening hatches and red missile tips inside. I dunno if I could deal with a Spartan (or Phalanx, if you prefer) with non-opening hatches...but the diecast is really nice.

If only TT could've gotten it together to release a diecast Destroid line in 1/55 scale! Imagine that!

I still have both of those comics, a fun read although it had nothing to do with Dougram. I think Josh B has a soft spot for those comics as well.

I Think I might have some Shogun Warriors comics like those as well. I don't think I've even touched my Paper/Comic anime related items yet and I'm barely just getting to review my Matchbox Robotech and GI Joe Items.

So much to Review!