As much as we here at Collection DX deride Korean toy and model kit making from time to time, I thought I would shine a spotlight on one of Koreas foremost model kit manufactures and highlight one of their earliest releases, Academy Model’s flawed but classic 1/72 P-40B Tomahawk. 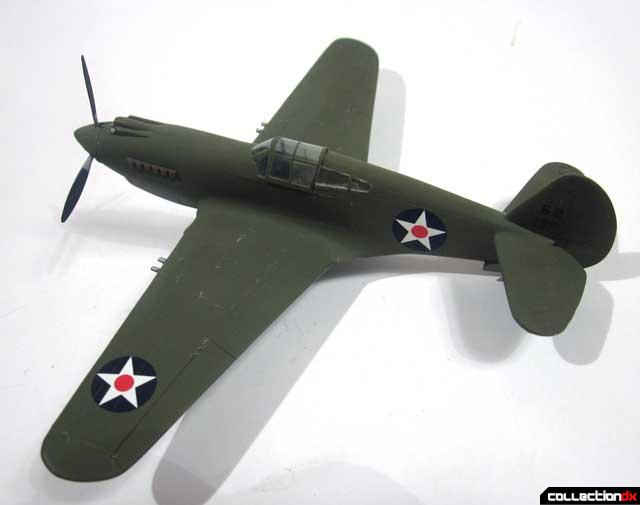 The Pilot and Plane:

Like many soldiers from World War II, pilot Charles Older seemed to be born under a lucky star of prominence of not only one but two historical events. You might not know his name but I am sure you have seen his aircraft as it is one of the most recognized and reproduced aircraft markings of WWII. 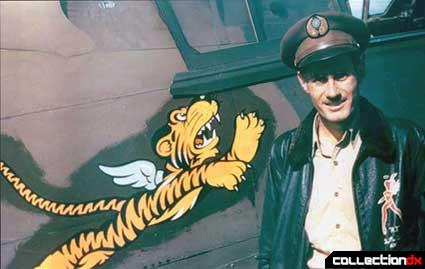 Older was a veteran of the Chinese based American Volunteer Group during the opening days of World War II, which predated America’s official entry into WWII. AVG pilots were given America’s modern front line fighter, the Curtiss P-40B, to engage the occupying Imperial Japanese Army in China. The pointy nose of the early P-40 “B” model lent AVG pilots to paint shark mouths on their aircraft. Older’s P-40B is usually the aircraft mostly produced by tattoo artists, aircraft restorers and modelers alike as it also includes the Hells Angels motif of 3rd Pursuit Squadron and an original cartoon tiger artwork designed and drawn by a Walt Disney artist. With the Hell’s Angels logo, original Walt Disney art and leering shark mouth markings, Older’s aircraft has endeared, endured and embedded itself in our subconscious and pop culture for young and old alike. 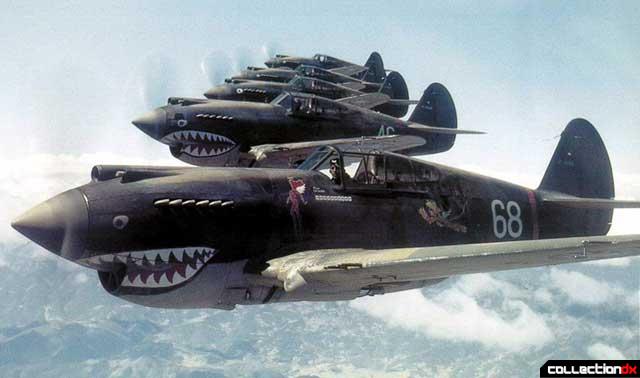 After WWII and the Korea War, in which Older was also a veteran of, he used his law degree that he received before he went to China and became a Los Angeles Superior Judge. Charles Older’s most famous trial? Being the presiding judge in the Charles Manson murder trial in 1970 where he narrowly missed being stabbed with a pen by Manson himself. How’s that for acclaim. Charles Older died in 2006 in Los Angles CA at the age of 89. 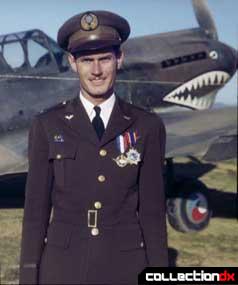 As much as an AVG fan I am, I decided to build the Academy P-40B kit with Pearl Harbor December 7Th 1941 markings. After thumbing through Ed Maloney’s Tora Tora Tora book I can across a picture of an anonymous shot up P-40B from the 18th Pursuit Squadron based on Wheeler Field, Pearl Harbor, Hawaii. These would be the markings I would use in place of the decals that came with the kit. 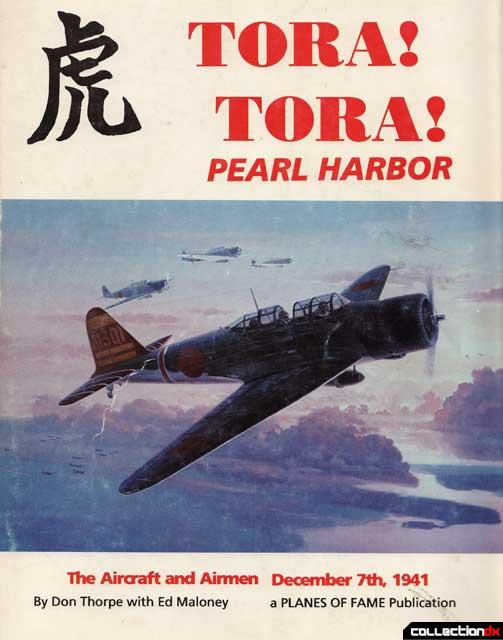 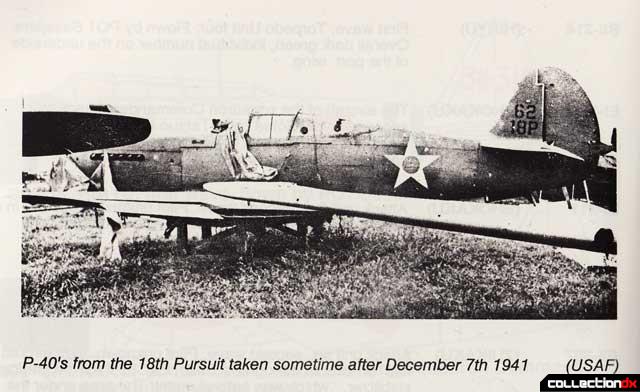 The Kit and Company:

Academy Model Kits, based in Gangbuk-gu, Seoul, Korea, started producing kits in 1969 mostly focusing on plastic model airplanes, tanks, ships, RC cars and tanks and recently airsoft guns.
Today Academy Models is one of the most respected kit manufactures in the world producing high quality original kits equal to the quality of Japan, China and the United States. So respected Bandai has recently partnered with Academy to co-produce and sell official Gundam products in Korea. Academy is truly the Jewel of Korea toy and model kit producers that other Korean manufactures should learn by example from. 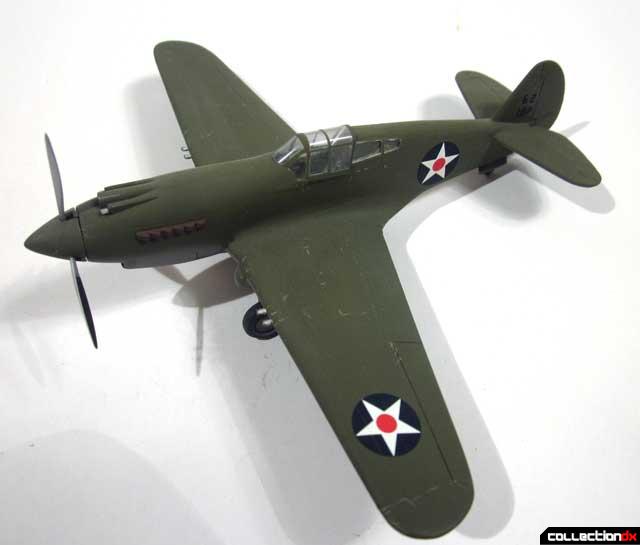 One of Academy’s earliest releases was this Curtiss P-40B Tomahawk released in the late 1970s/early 1980’s. While Korea toy and model kit manufactures are known for bootlegging other peoples molds to produce grey market products, Academy reproduced the molds of a defunct model kit manufacture named Hawk and recreated their outdated P-40B model kit, retooled it and actually made it better than the original Hawk release.

30 years later the kit is still widely available as an inexpensive $5.00 kit and although the kit is not without fault, it is still a fun kit to build. I built a couple of these kits as kid back in the 1980’s and it is great to revisit this kit once again as an adult and point out some minor revisions to improve the kit. 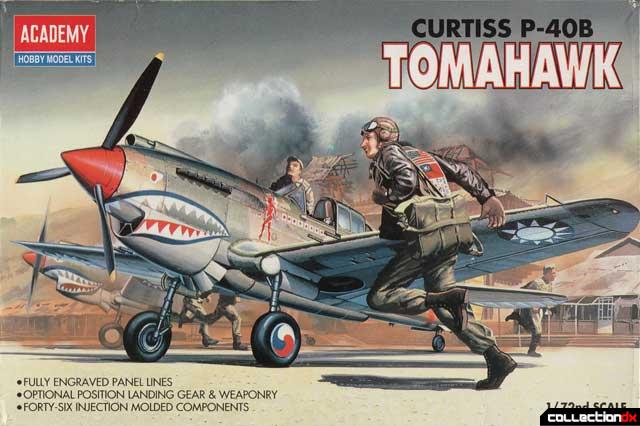 Picking up on a Hasegawa marketing trait, Academy started to replace their original bland box art designs with beautifully painted aviation art for their own box art. I love the dramatic depiction of the new box art of an air raid in progress with pilots running to their P-40B’s on the tarmac in 1941 China. 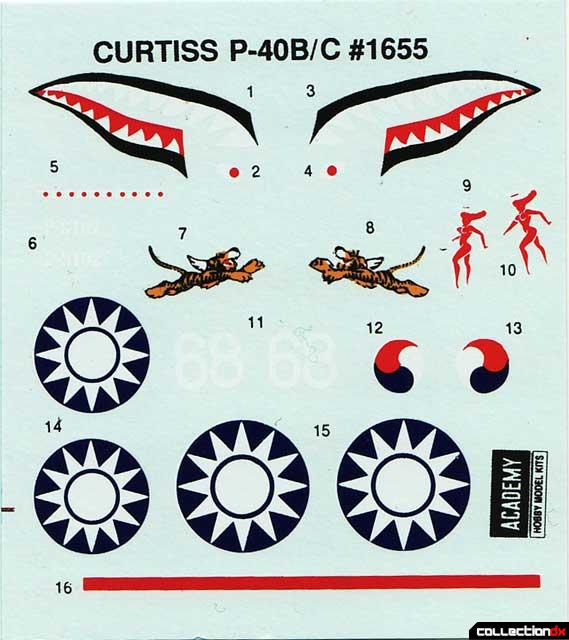 First, my issues with this model kit. The single worst aspect of this kit is the clear window. Not only is the shape wrong, the part is extremely thick and the window frames are completely out of scale. This part should be replaced by Squadron’s P-40 vacuform replacement window. Not only is it an inexpensive replacement part but it enhances the over all quality and look of the kit. 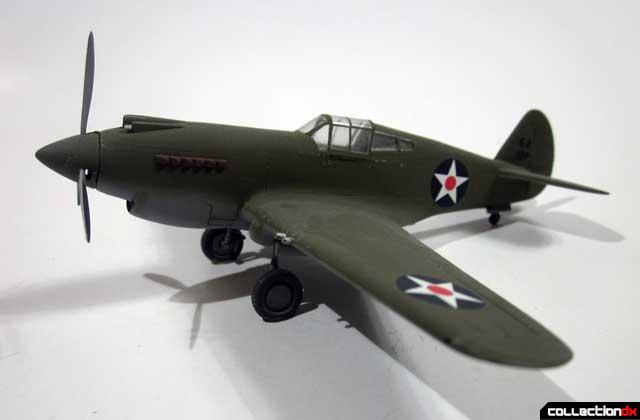 The kit wheels are very smooth and lack any type of details. I replaced these with True Details’ resin replacement P-40 wheels. These two replacements are about $5.00 total, which still keeps the improvements inexpensive.

The cockpit is very sparse only including a basic seat and a stick. A photoetche replacement cockpit could be used but most of the ones I have seen on the market are for later models of the P-40 and there are not any replacement P-40B cockpits available on the market. I opted to scratch build a new cockpit.

This is a basic kit is only four sprue; accordingly it is a quick build. The kit has no wing dihedral so you need to bend the wings up when gluing them to the body. There also is not any landing gear well detail. This is easily fixed with thin strips of sheet plastic glued into the wheel well. 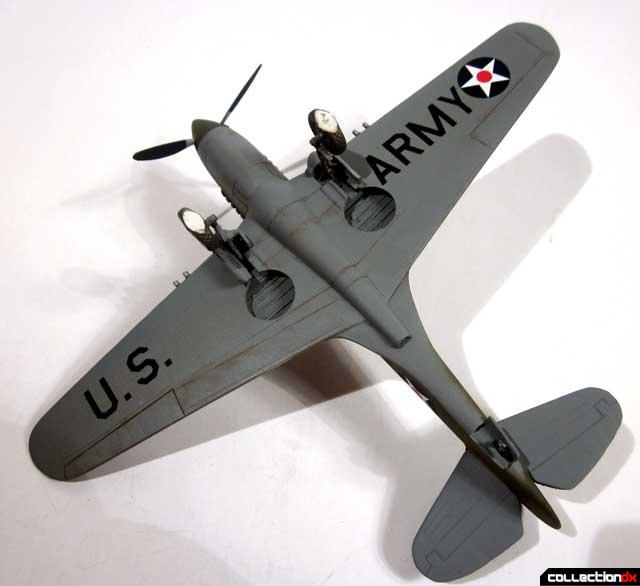 Once the building is finished you will notice that although the kit has some great recessed panel lines the model lacks any surface details for the rudder and flaps. I fixed this by scraping with a rounded edge X-Acto blade some ribbing where the cloth dope would set in the flap. A simple technique but easily fixes the monotony of the smooth features. 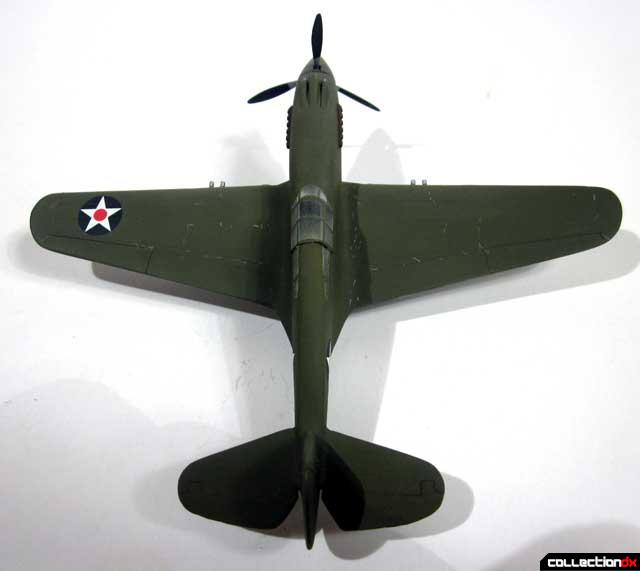 After a flat coat, I rendered some basic weathering on the model kit with thinned oil paint and a silver pencil. Before the daily grind of WWII these aircraft were well kept and maintained in peacetime America, so I did not want to over weather the subject. Standing back and looking at the kit when finished, the only issue I have with the kit is that the overall shape is soft, especially in the rear tail area and the trailing edge is a bit thick. But considering this kits background is over 40 years old and it is only a $5.00 kit I do not hold its scale issues against it and concentrated on the joy of building it. 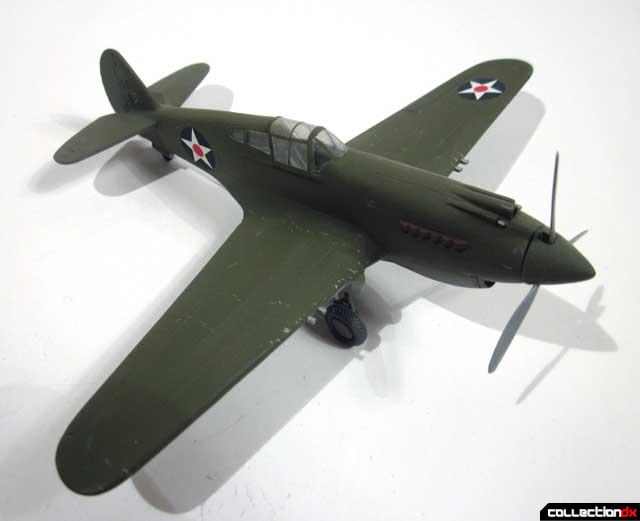 I wish that Academy would at least retool the glass, as it ruins the overall kit when finished. Otherwise this is still a fun kit to build with the decals that are included or with your own set of decals. Aftermarket parts are available and inexpensive and will set you back altogether with the kit for only around $10.00 which is very affordable. Academy’s P-40B is still a fun model kit to build for all skill levels of model builders.

©2011 Article and pictures by Leonardo Flores.