The majority of my exposure to Owlman came from the DC animated movie Justice League: Crisis on Two Earths which was the story of an alternate universe where evil versions of the Justice League members known as the Crime Syndicate rule the planet with an iron fist. Owlman is that universe's equivalent of Batman and while played by James Woods, made me immediately fall in love with the maniacal character who just wanted to kill everything that ever lived.

Although mostly forgotten since then, the Crime Syndicate showed up again in the recent DC Comics during the Forever Evil storyline. Since the timing was appropriate, DC Collectibles took this opportunity to do figures of the Crime Syndicate members and man are they some of DCC's best work yet. 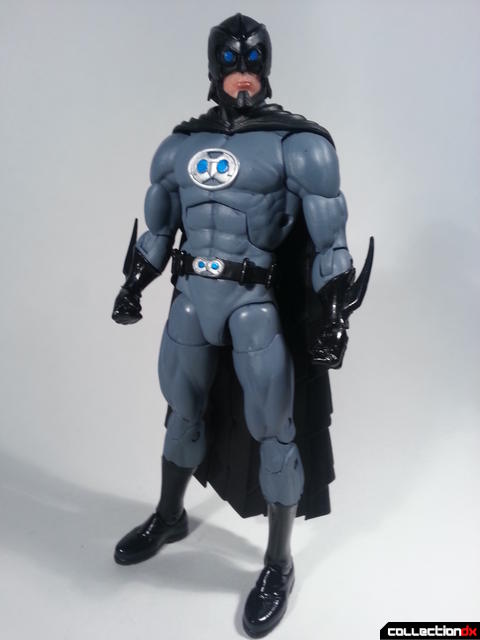 Despite being New 52, I feel that Owlman's design is still pretty consistent with previous representations and I can get behind it. The gray is pretty clean and the “feathered” cape is a softer plastic to allow it to bend and pose as needed in various situations. 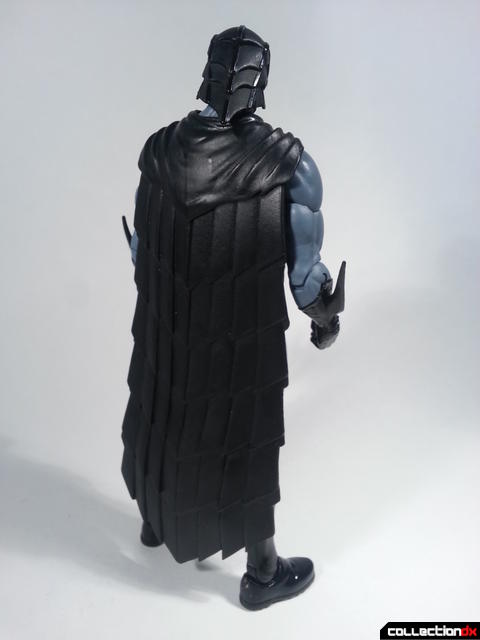 I really like the head sculpt, which manages to be both pensive and cold at the same time. 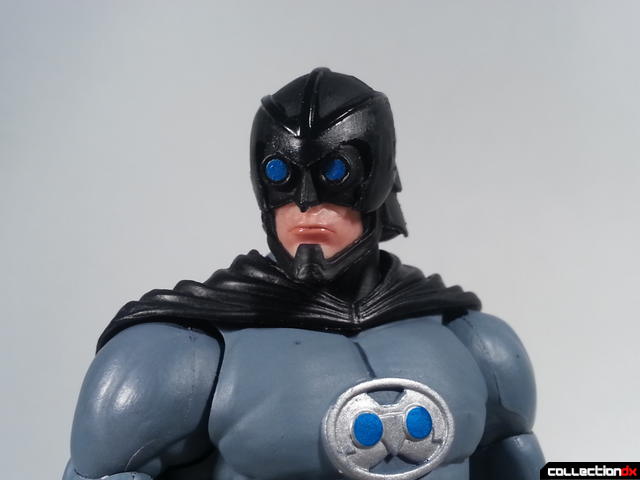 Right when you look at this guy, he looks different. He doesn't even look like a DC Collectibles produced figure. It just looks like a really solid American action figure: and it is. The articulation is leaps and bounds above anything that DC Collectibles has done and is right on par with the work of Hasbro's Marvel Legends and (sometimes) NECA's other toys. 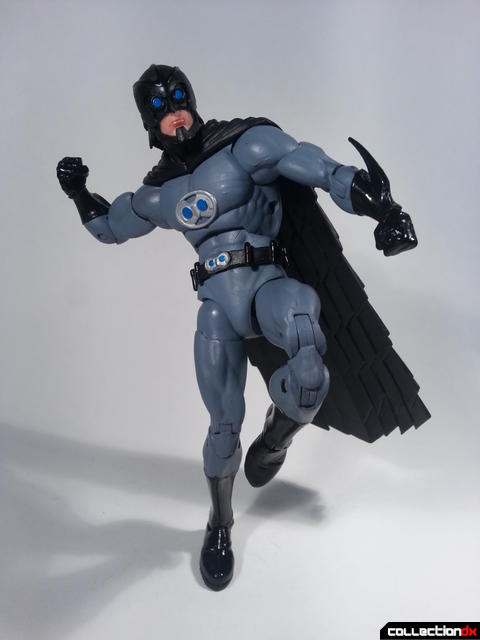 The standard superhero action figure articulation is all present: double-ball jointed head, universal shoulders, bicep swivels, elbow bends, wrist cuts and swivels, an ab crunch, waist joint, ball-jointed hips, thigh swivels, double jointed knees, and to top it all off: ankle rockers. If you want this guy to do something, he does it. 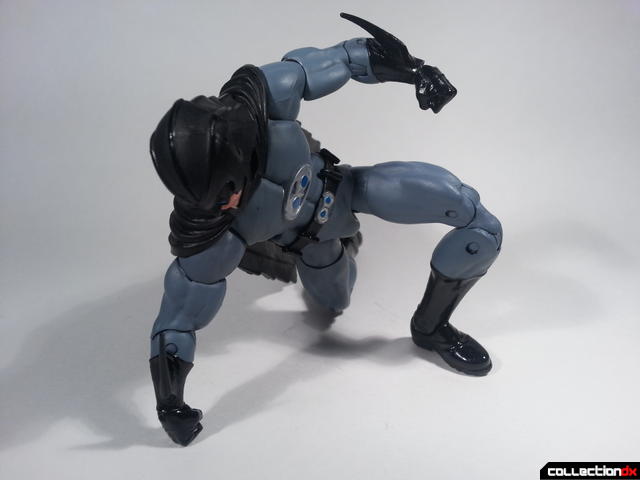 I suppose the only real downside to this guy is that aside from being a relatively obscure character, he doesn't really come with anything else other than himself. If you're looking for accessories, a stand, or anything like that he's sorely lacking. But I personally don't mind since as a figure he's excellent. 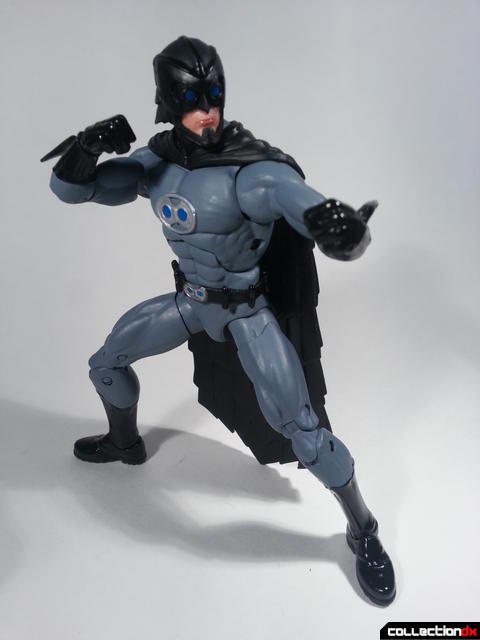 Even though I had bought and enjoyed previous DC Collectibles figures before, this was the one that really sold me on the company. These few figures showed off just what they were capable of, and to me really makes me think of them as what could be one of the best toy makers in the western market. The extra articulation does wonders and really makes me want to see what else that they are going to do in the future. 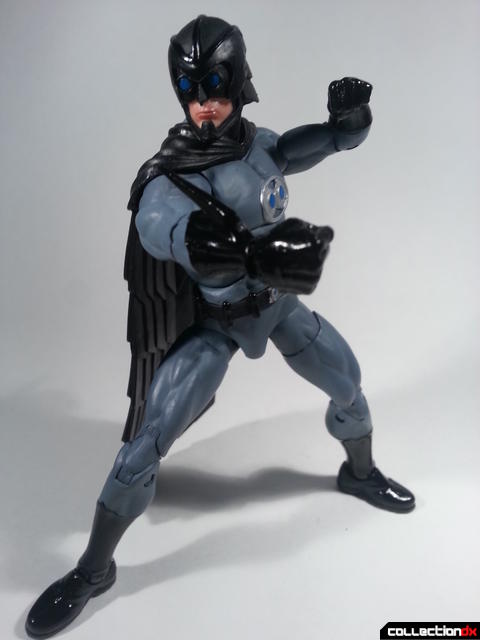 Also, I don't care what Forever Evil said about Superwoman being a two-timing cake-faced hussy, these two psychopaths were meant for each other. 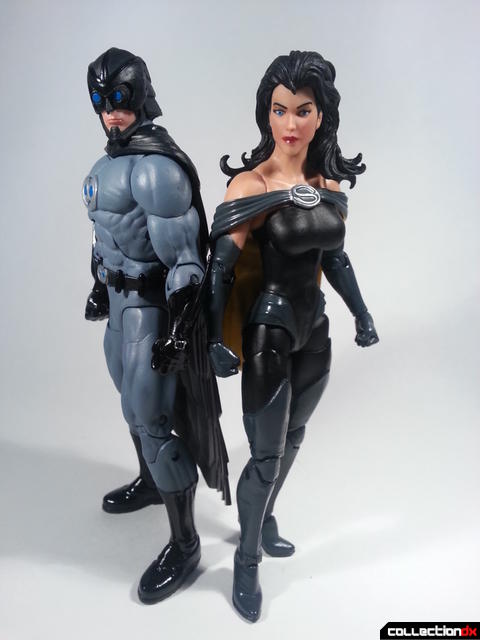 DC is a painful experience. They need to stop trying to convince us that Owl-Man makes sense as a character. These are stupid, stupid characters Super-Man really? If they want to play nostalgia that's fine I get it but these stupid superheroes are tiresome. Stop trying to convince me Wonder-Woman makes sense. If you want nostalgia okay I guess but outside of that context, dumb.

Reading your comments is a painful experience, man. Could you calm down a little and stop getting so worked up over everything you don't like? Every time I see you comment you're trashing something and being negative. It's really against the tone of CDX, a website about liking things.

Posted by recognizer on 15 June, 2014 - 12:02
I guess you read my comment on Miracle Productions Voltron

I actually don't think I am all that negative. Outside of this comment and that one I am usually pretty positive. But let's be honest only a fool trusts his own opinions. So I take that to heart apologies to the offended. If you go look at Dkun's review of Swerve I was positive in fact Dkun commented they wanted a Maketoys Trash-Talk and I said would split another set if they wanted it. If thought that was in good keeping with CDX but hey I am jerk sometimes so who knows. Thanks for the heads up.

Oh wait you wanted to split the set? I think I misunderstood that. Heck yes I'd jump in on that.

Yeah it's a great set. You only want Trash-Talk, Shoomer gun and beverage tray correct? I have to ship out an order with Green Giant and GX-65 so I can toss them in. $70 is the retail so you're into it for $35 cool?

You talk like an Otaku that has never grab a comic book even for mistake. But to focus on your comments here ¿who is talking about Wonder Woman or Superman in this review? they are talking about Owl-Man, so your opinions are very out of context, if you dont like comics or you want to make a rant about them I think you choose the wrong topic and way of doing it.

Let's just all cool off and be friends. No one meant to offend anyone else. Everyone is entitled to their opinions.