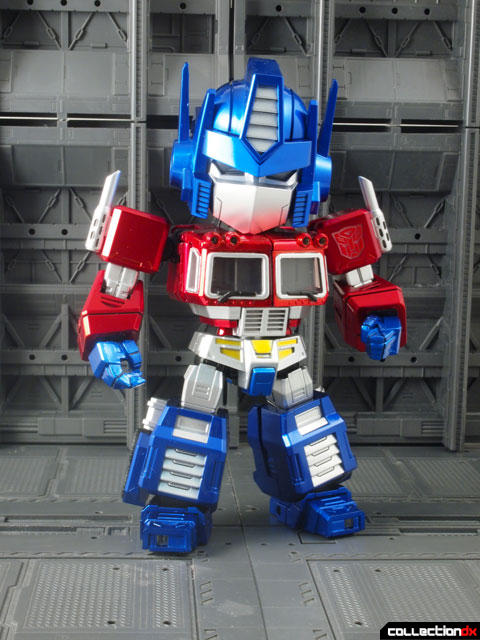 Officially licensed and sanctioned by Hasbro, the MN-001 Optimus Prime is an ambitious and remarkable toy. 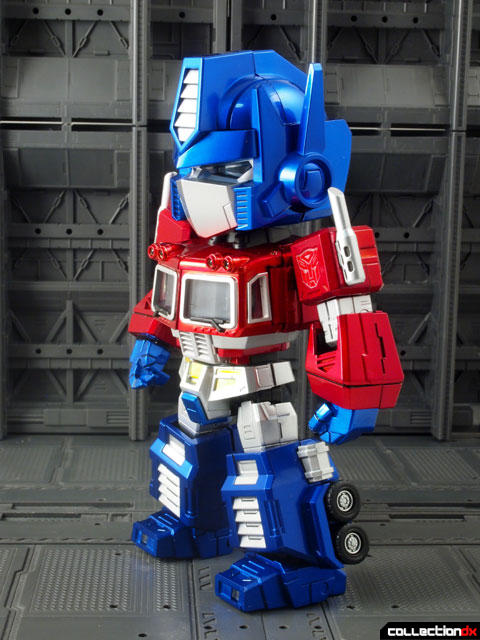 Right away you can feel the quality of this piece when you pick it up. I believe it is all plastic but some of the finishes are so nice I had to double check to be sure. The entire figure is painted in a phenomenal metallic coat of paint. 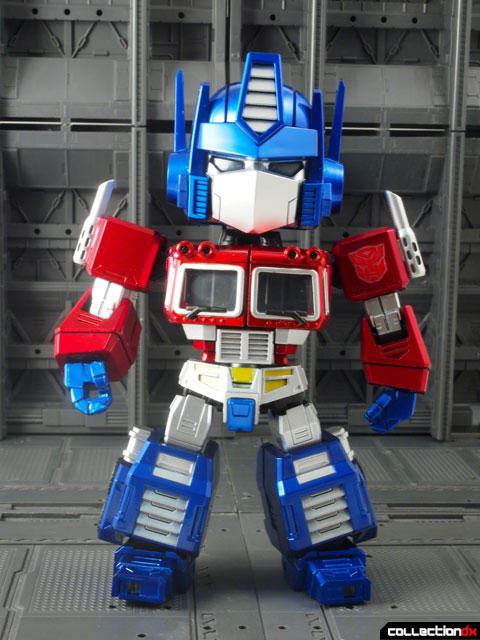 Despite the size, Prime is well articulated. Most of the joints are nice and clicky. Some of the movement is limited due to the nature of the figure though. 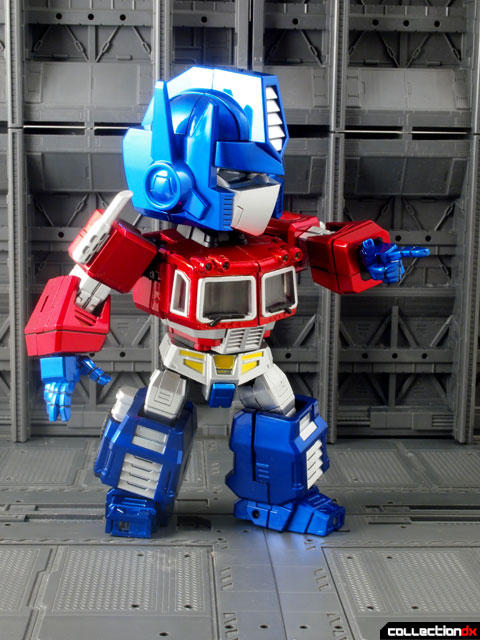 One of the nicer joints is the chest joint. Pull up on the chest a bit to give some clearance and you can then bend him forward or backward at the grill on his chest. 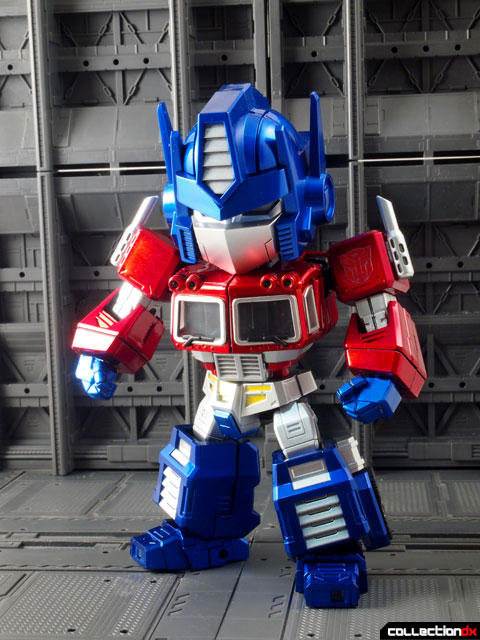 There are joints everywhere you would expect them to be. Even toe joints.

What really sets this figure apart is all of the illuminated areas. The figure has a total of 5 different switches to turn on. 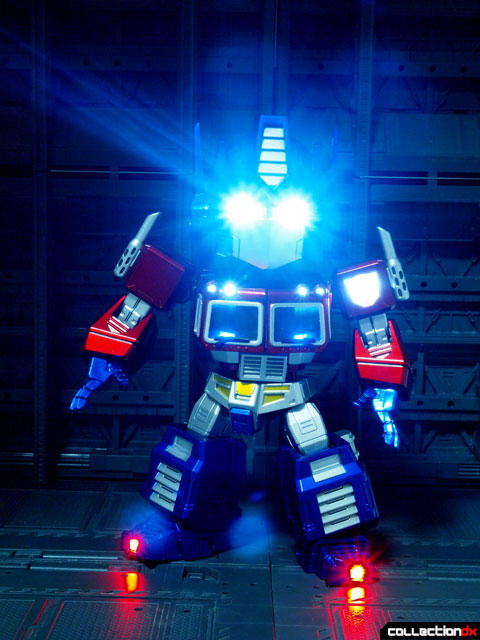 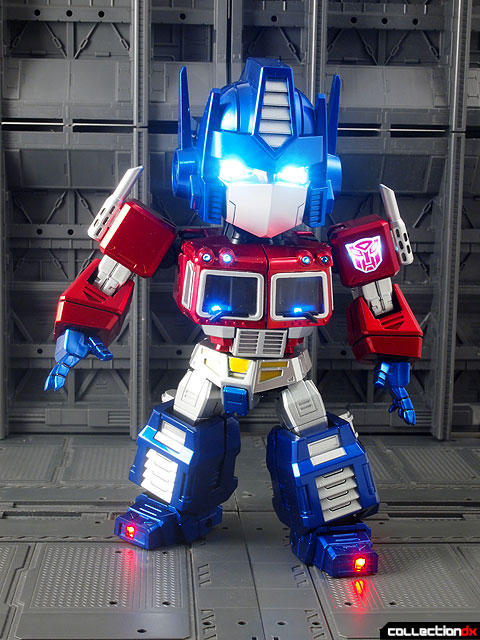 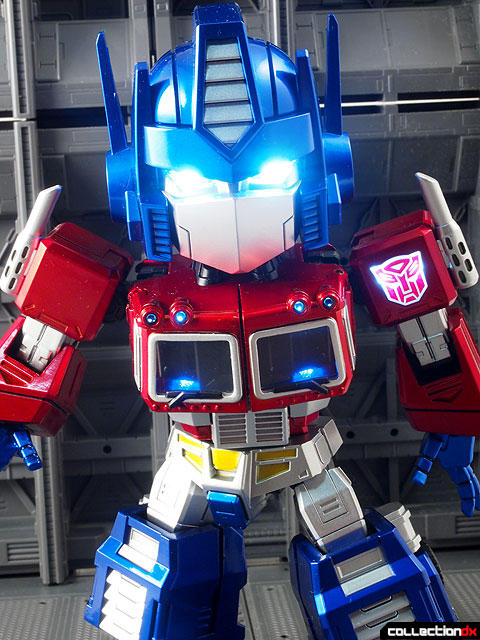 The chest features seven different light sources. Optimus’ chest opens up to reveal a panel, which when lifted reveals the Matrix of Leadership. The middle of the Matrix is translucent, allowing the light to shine through. The Matrix is removable, but difficult if you don’t have fingernails. 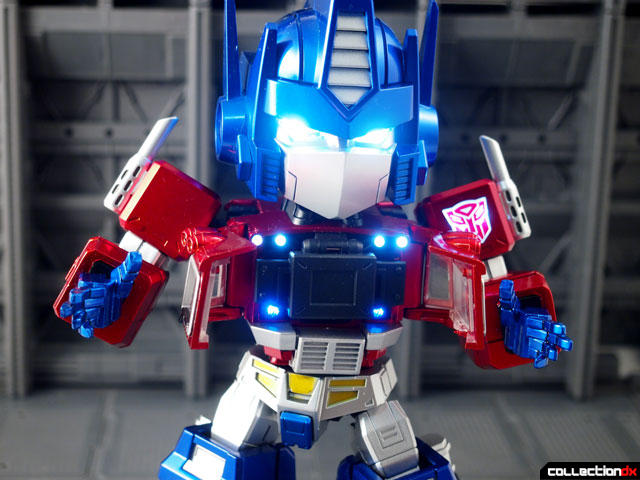 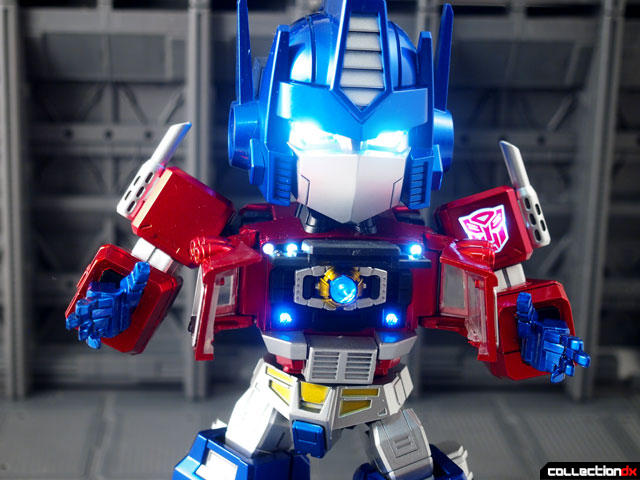 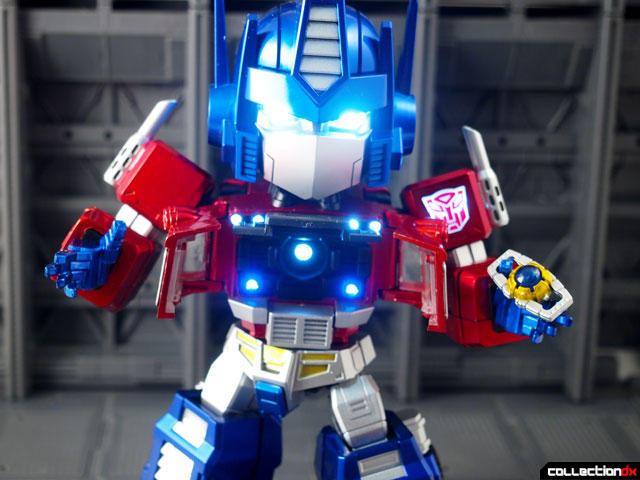 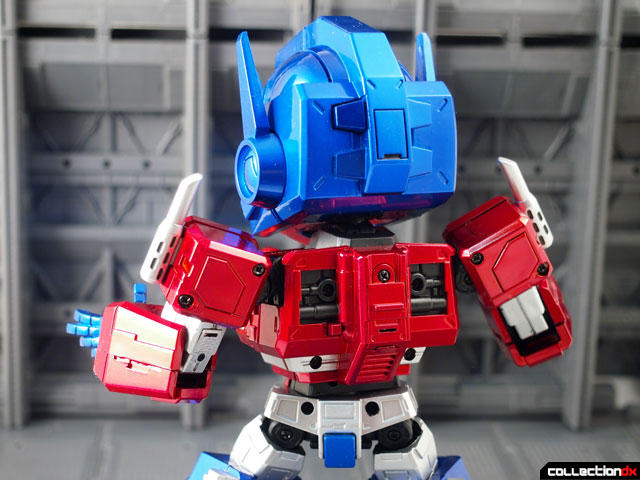 Each foot also has a light on the toe, which are turned on individually with micro-switches under the feet. The switches remind me of the ones used by Hot Toys on their light-up figures. 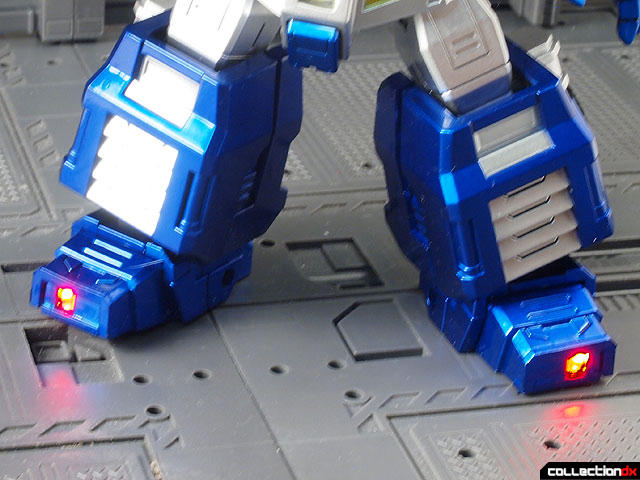 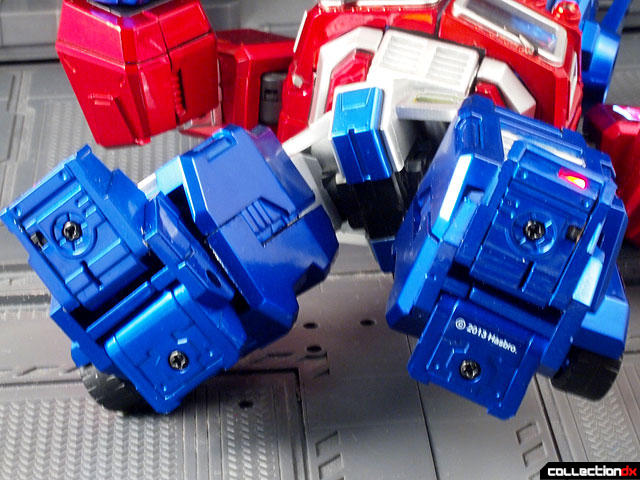 Finally, the Autobot logo on the shoulder lights up simply by pressing the logo. The whole panel is a button. 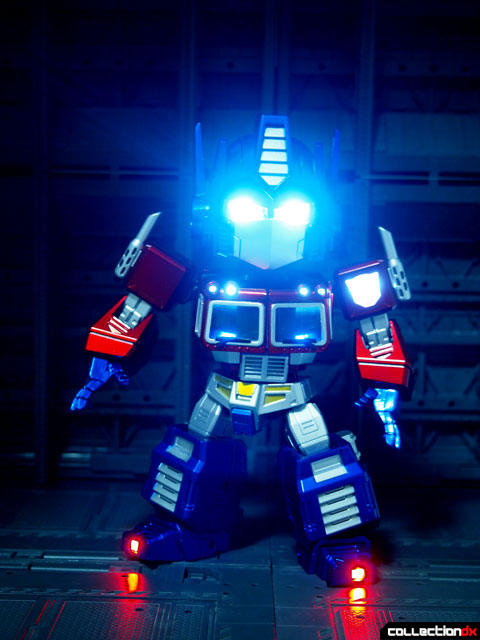 Optimus includes several variant hands. One hand holds the gun, which also has a light-up feature. the Illumination on the gun can be seen through the barrel and on the sides. 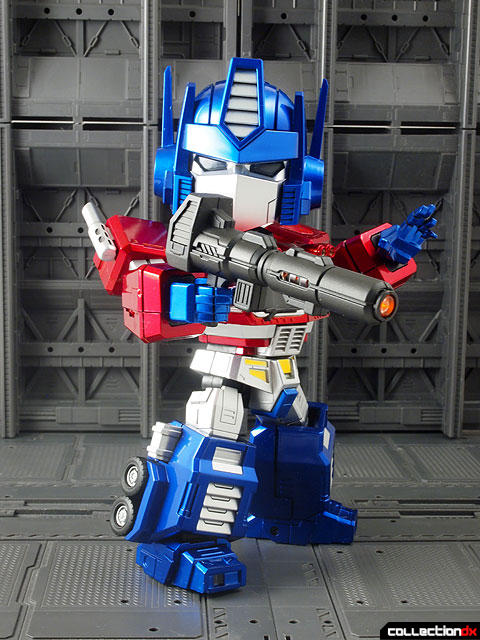 Splayed hands are included, as well as a pointing / thumbs up hand. This was packaged separately in a foil pouch, so I am unsure if this hand is standard or a limited bonus. 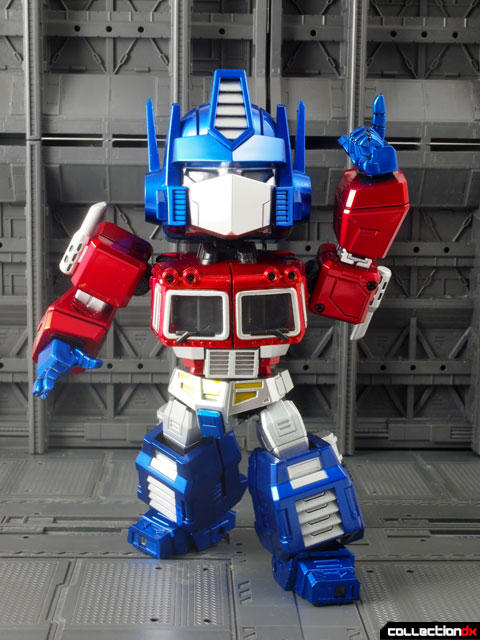 Also included is the energy axe. It just plugs in where a hand would go. With all the electronic gimmicks, I’m surprised they didn’t find a way to make it light up. 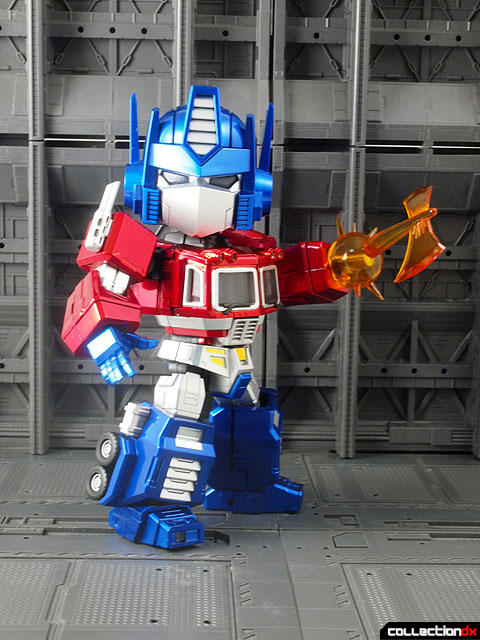 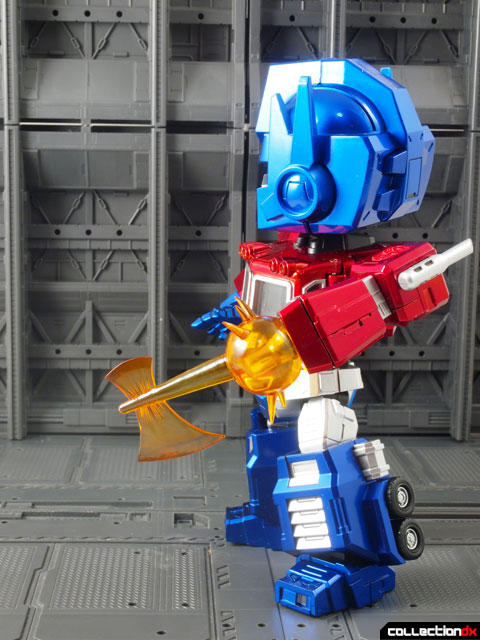 If all of this wasn’t enough, a good portion of the armor on Optimus is removable! 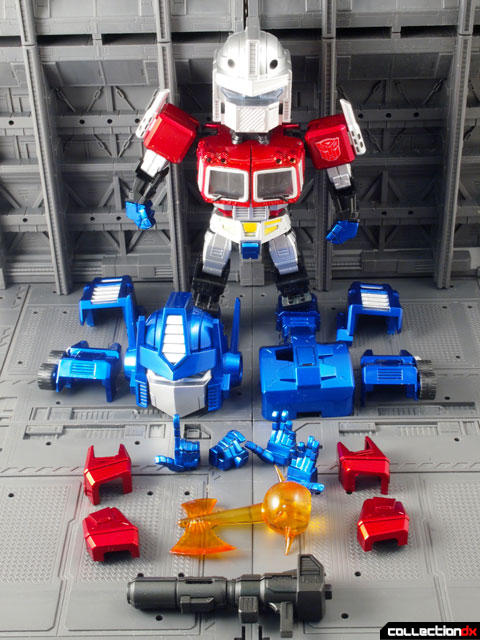 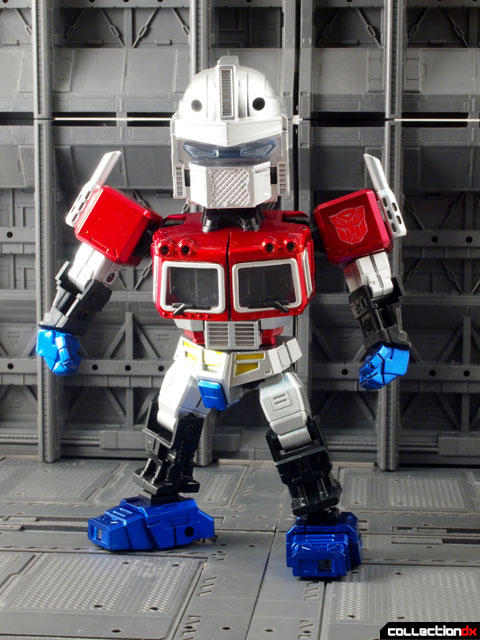 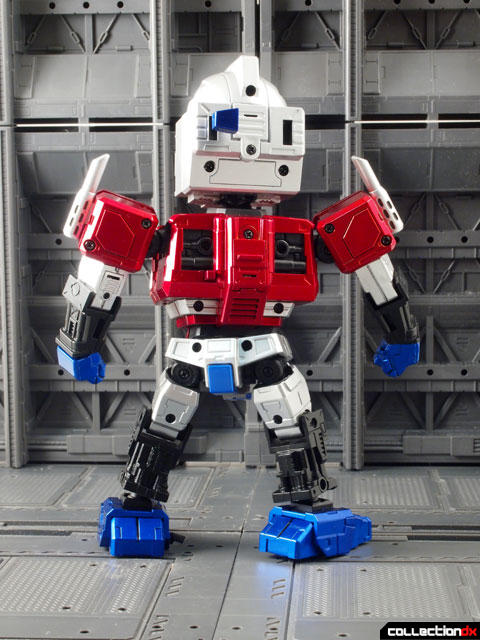 There’s a lot packed into this little guy. I imagine if I ever have to replace batteries someday that is going to be a real pain. All batteries are included, but if you want to replace them you need 3 AG3 and 15 AG1 batteries. Good luck with that. 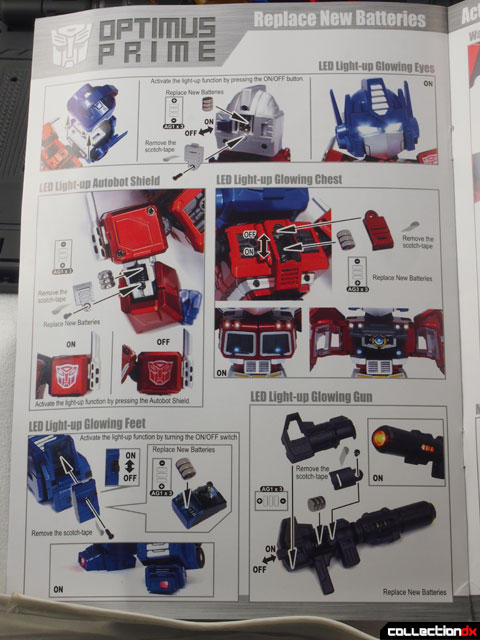 The included instruction book is very nice as well. All of the people involved with the project get proper credit on the back, which I think something all toy companies should do. 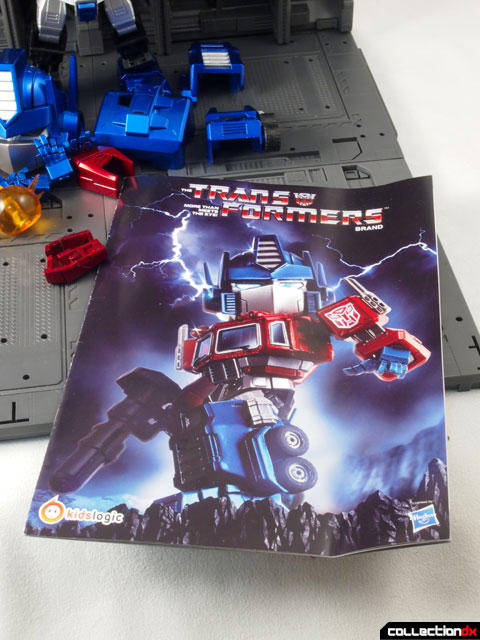 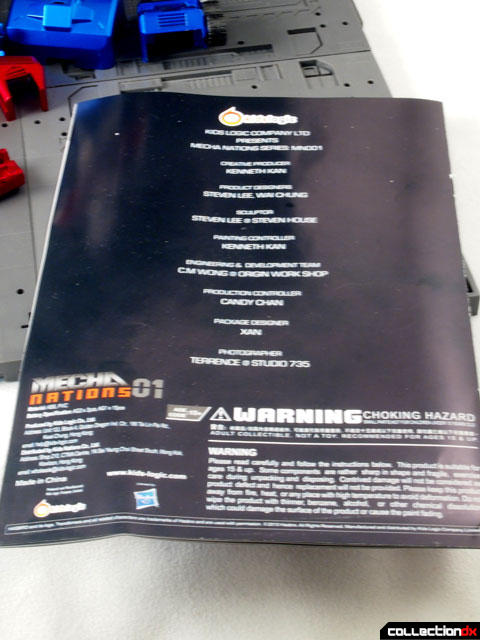 As far as I’m concerned, this is a home run. Buy without regrets.

I love the little speaker mouth on his unarmored face. They did something like that in the comics a few times.

I have done some online investigating
It Appears the Pointing Hand is NOT!! a Standard accessory
BUT Only a SAMPLE Exclusive!! =>(
Therefore few pointing hands will make the states

My rant
Is it weird that I only was interested in this figure
Because of the Comedic ASPECT of the HAND?

At a price of $130us dollars(plus) don't see
Why they just couldn't include the pointing HAND!!

Additionally Quality Control issues have been showing UP!!
On this figure. With light Gimmicks Failing and joints falling apart
Making me severely disappointed on my soon to arrive order!!
I had some High HOPES for this line!!