One of my favorite scenes in Tron: Legacy was the jet chase at the end. I really dug those Light Jets, and Spin Master has come to the rescue with an AWESOME One Man Light Jet toy.

This toy arrives as part of Series 2 of Tron Legacy toys. I know that I have been really down on Spin Master for the quality of their 3 3 /4 figure line, but the vehicles more than make up for it.

The box is the same size as a standard Light Cycle toy. It's a small box, and I took a step back when I looked at the price. $18 bucks for something that small? Fear not - they cleverly disassembled the toy in order to save space. 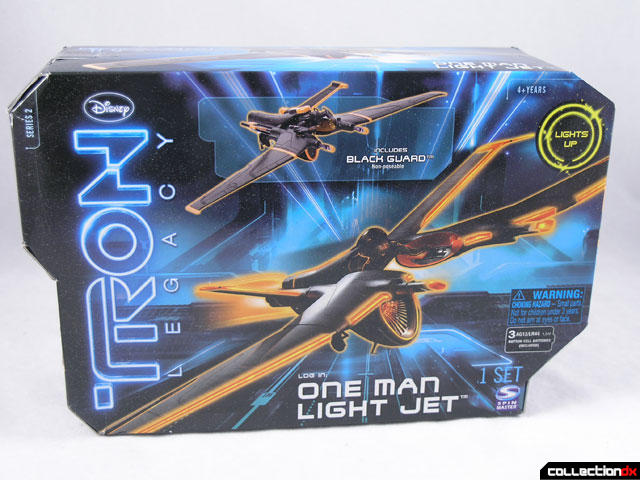 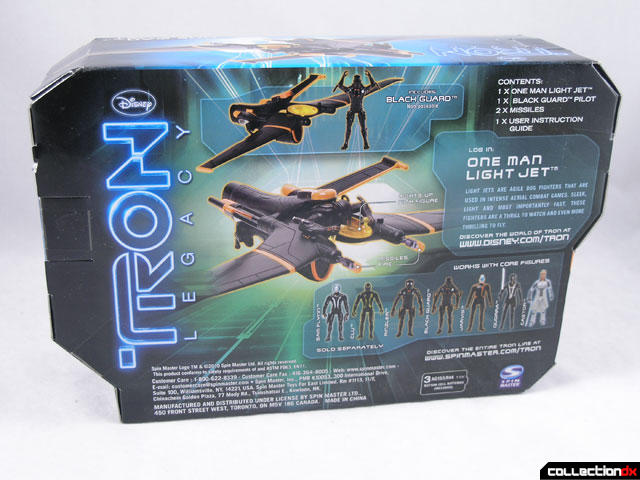 Included with the toy is the Light Jet, 2 missiles, and a non-poseable pilot figure.

Assembly is simple - just attach the wings. Once completed you have a great toy with a 15 inch wingspan. 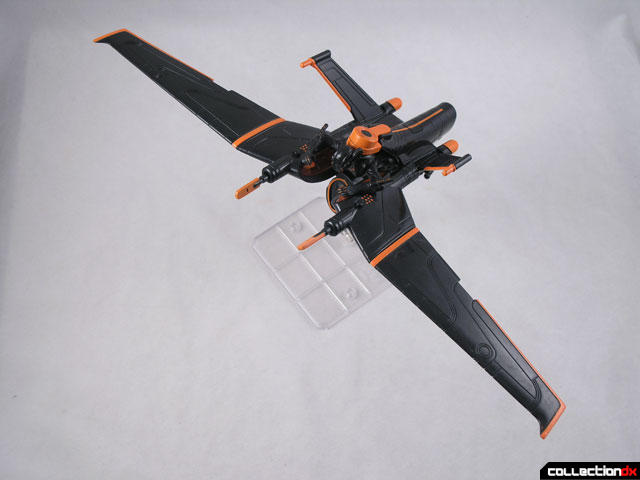 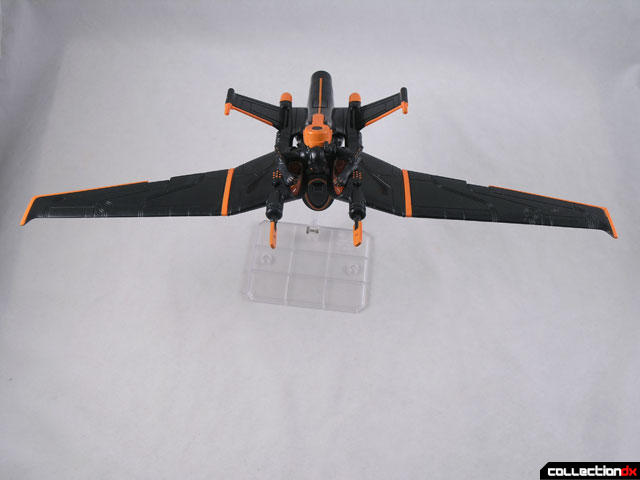 The One Man Light Jet is molded out of black plastic, with orange paint highlights and transparent orange parts. 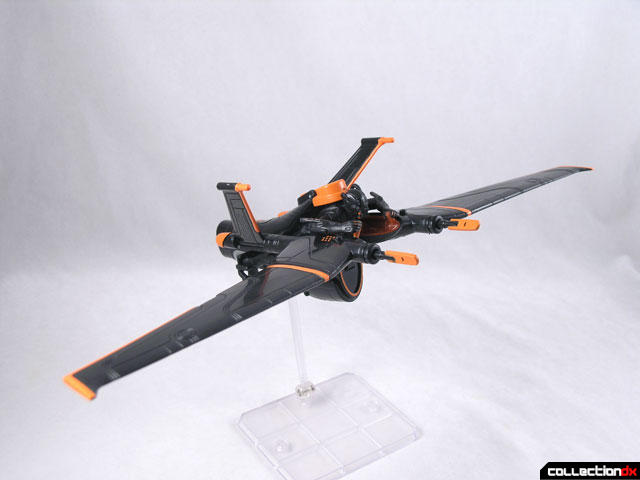 Getting the dummy figure in place is a bit difficult, so I can't imagine putting a real figure in there. Don't bother - the dummy looks great. The hands grab the controls and the feet fit through the openings. 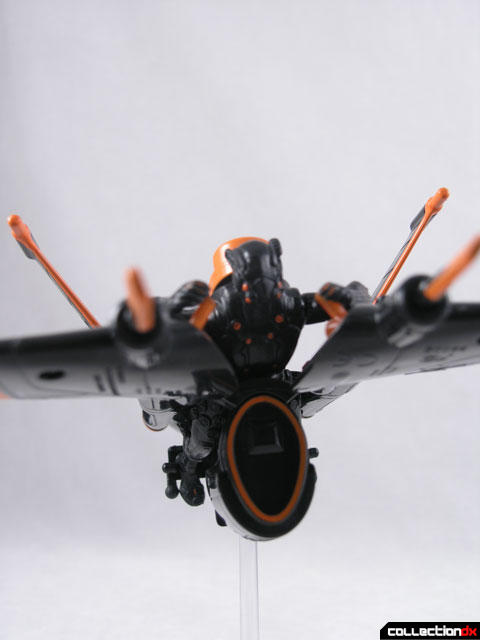 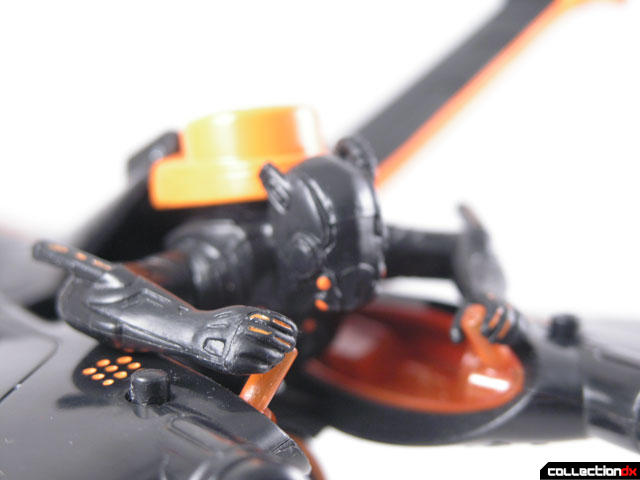 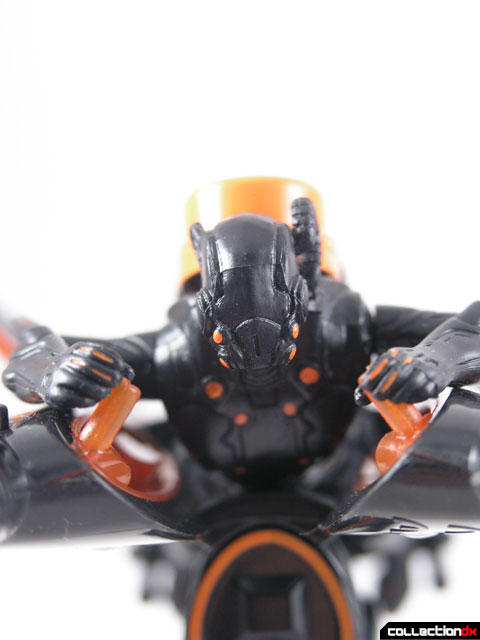 Insert a missile into either launcher and press the button near the controls - the missiles fire with sufficient force. Kudos for including actual firing missiles! 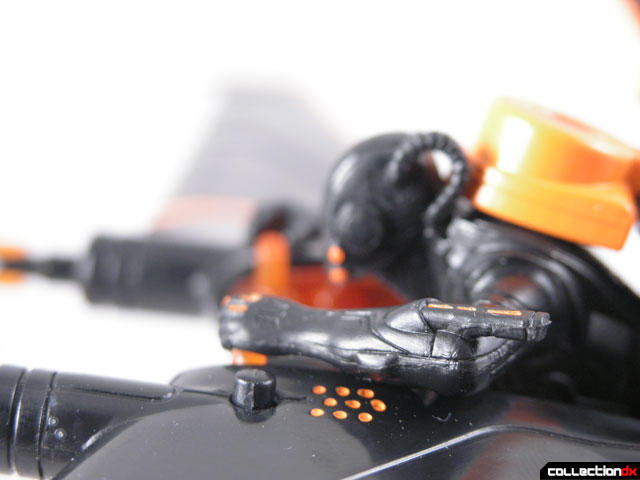 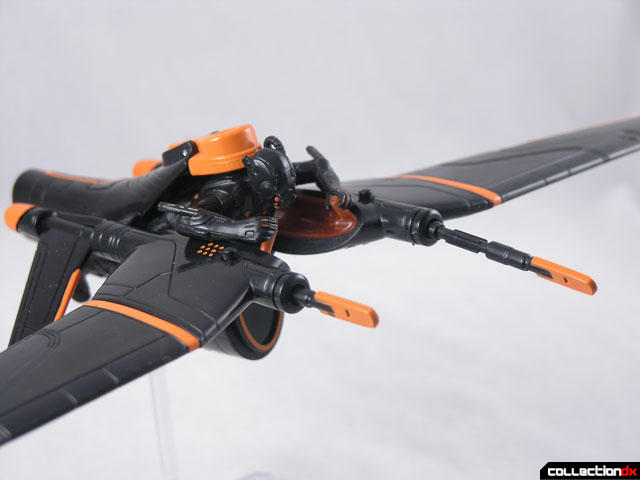 The light up feature is good, but could be better. Pressing the button on the back illuminates the cockpit area, the engine underneath, and a panel on the back. I would have liked to have seen the lights throughout the whole vehicle, but it was not to be. 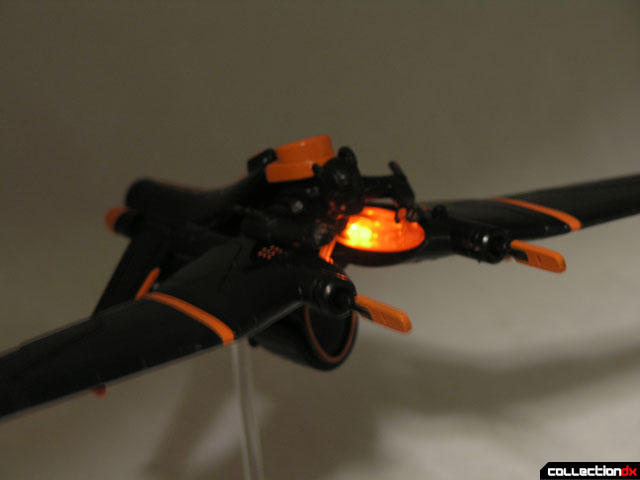 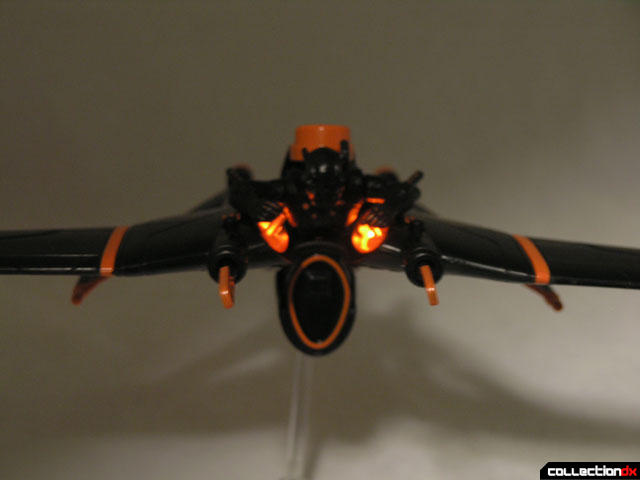 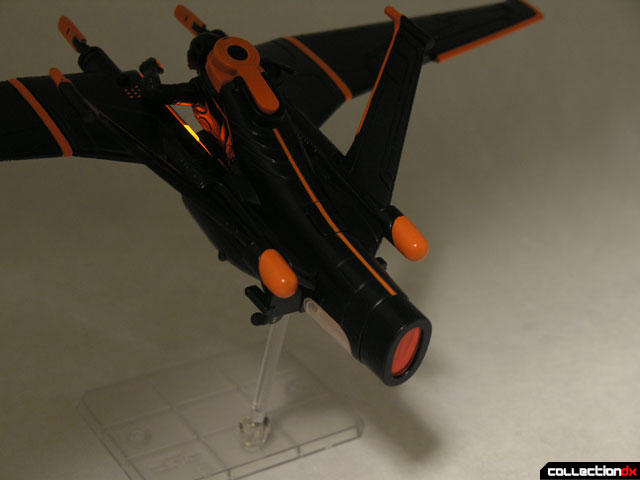 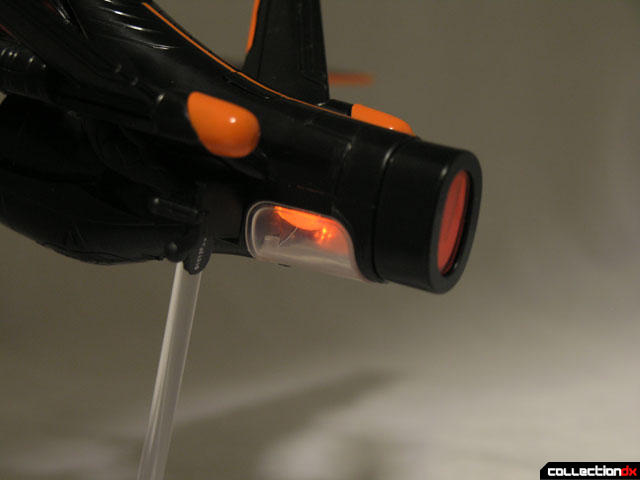 There's another gimmick - the wings in the back can move up and down. Not sure if they moved in the movie so I guess I will have to go again and take a look! 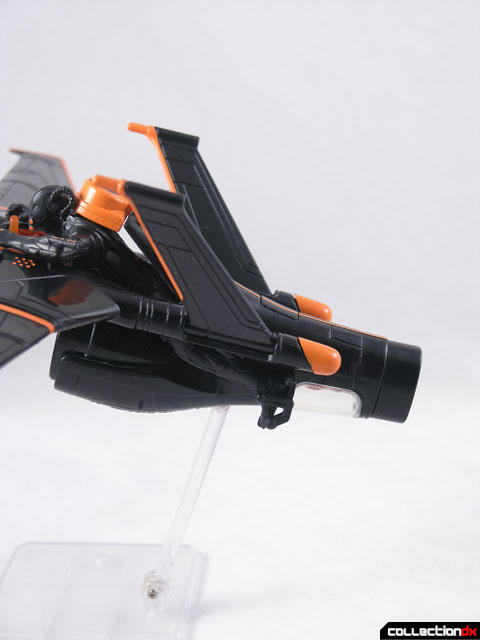 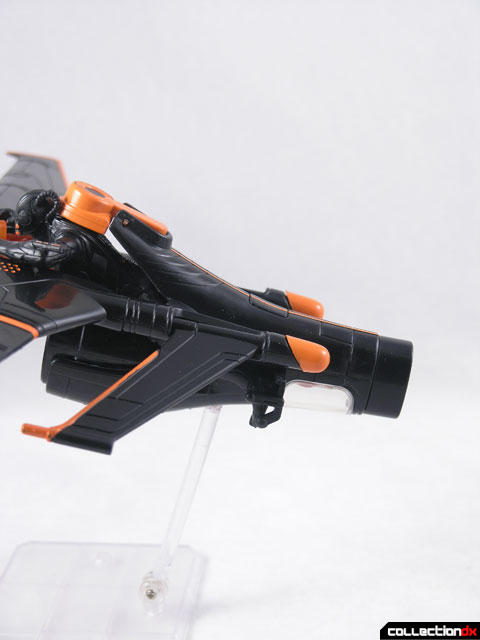 No stand is included. You may be asking what kind of stand I am using then? It's a Bandai Tamashii Stand. But before you go out and get one - heed my warning. I destroyed the stand getting it in. There is a screw hole in the bottom of the jet that looks about the right size as a Tamashii stand, but inserting it cracked the end, ruining the stand. I did manage to wedge the broken stand in with a bit of force, and so it shall remain. Perhaps you can find a more appropriate stand elsewhere. 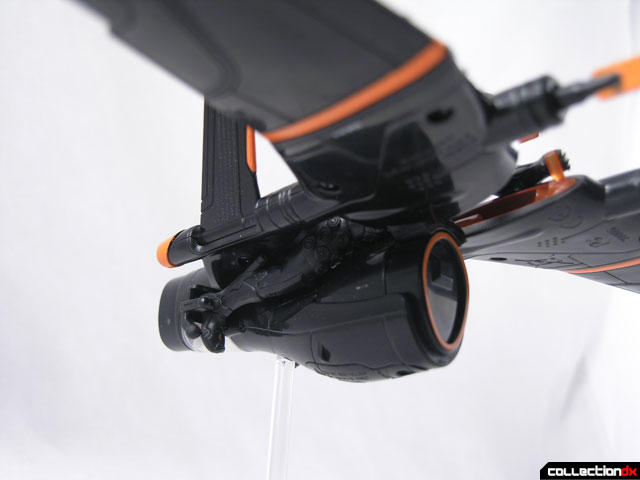 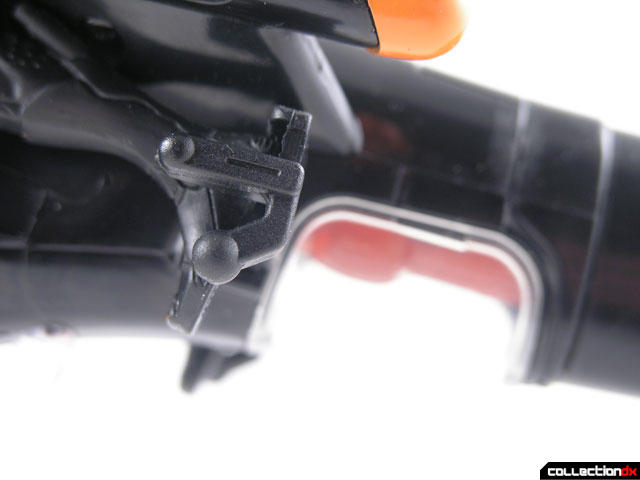 I like this. A lot. I hope they go forward and make the 3 person Light Jet that I've heard rumors about. That would be awesome.

This came out shockingly nice compared to the other toys, but I can't help think there's a lost opportunity in not incorporating the light wall effect into a neat dynamic display flight base. The Tron designs all look a little off when taken out of the black with neon lights context of the film's world. The bright paint is a poor substitute... I wonder how these would have looked if the lights were clear parts over bright silver for a more complex finish?