The American side of Combiner Wars has had a few shakeups among the established teams. Much like with Aerialbot Alpha Bravo filling in for Slingshot, a new Stunticon recruit took the place of long-time member Wildrider. By now, many of us have seen how the Japanese Unite Warriors versions of both Superion and Menasor have the "correct" roster thanks to some new heads, and that Hasbro is planning to release the two Combiner members (who fans thought had been sacked) here in the states.

Putting all that aside, I'm here to look at the (first) red and gray Combiner Wars Stunticon. Put your manipulators together for the rough and tumble Offroad! 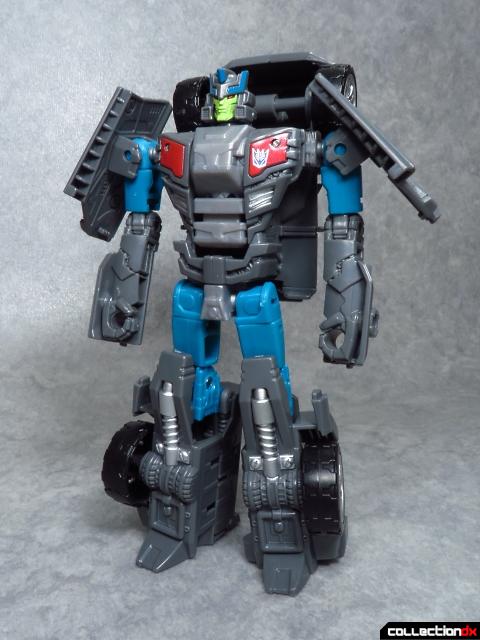 Standing six inches tall thanks to his hood hoodie, Offroad is a good lookin' Transformer who might not stick out in a crowd but hits all the right marks. His sudden appearance confused a lot of fans because, unlike Alpha Bravo, there is no obvious potential repaint with this design. We did later find out that Protectobot First Aid is based on Offroad but features heavy remolding. I feel like we might see him being used a third time as Combaticon Swindle, but time will tell. 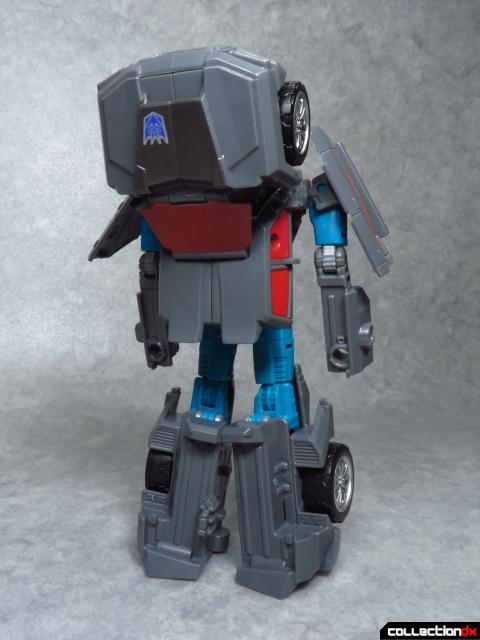 Offroad proudly shows his Scramble City roots with a big chunk of his vehicle mode just chilling out on his back. Considering how many beloved Transformers (like Piiiiiiiiiipes) also do this, I can't really find any fault with this design choice. 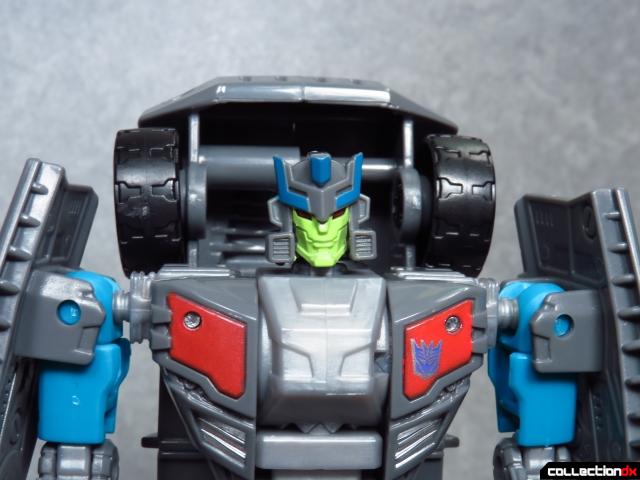 His helmet and face are nice and intimidating as expected of a Decepticon. Looking over this guy gave me an odd feeling of deja vu, and upon further investigation I found that Offroad is quite similar to the G1 Triggercon named Ruckus. This makes me real happy as Ruckus was one of my childhood Transformers and I never thought he'd ever get a modern figure. 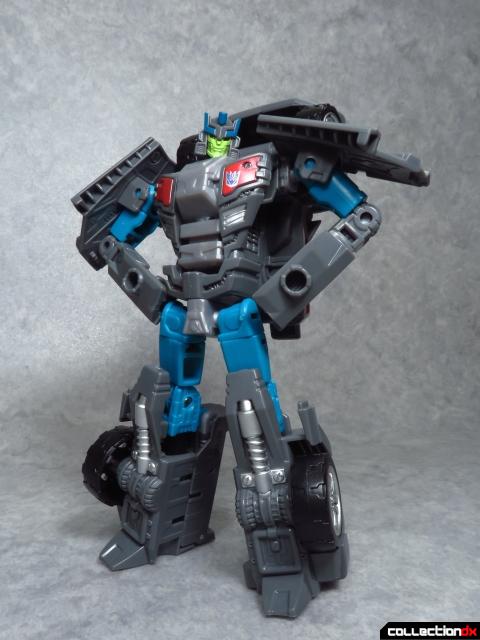 Much like with Alpha Bravo, Offroad is a toy that is brimming with personality even if the character is a newcomer to the series. Like other Combiner Wars limbs, he's got a good amount of articulation that lets the toy both fight and emote with ease. Note that the doors of his truck mode become a set of movable arm shields for a little extra flair. 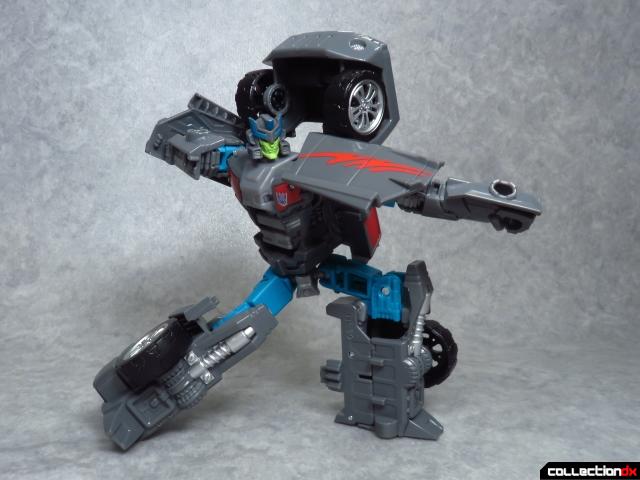 Above the waist, Offroad has ball-jointed shoulders, bicep swivels, ratcheted elbows, and a ball-jointed neck. Also, his arm shields can hinge up and down to help keep them clear of his backpack. Down below, this Stunticon sports the requisite waist swivel, ball-jointed hips, swiveling thighs, and single jointed knees. All of this makes Offroad a straightforward figure that is really fun to play with. 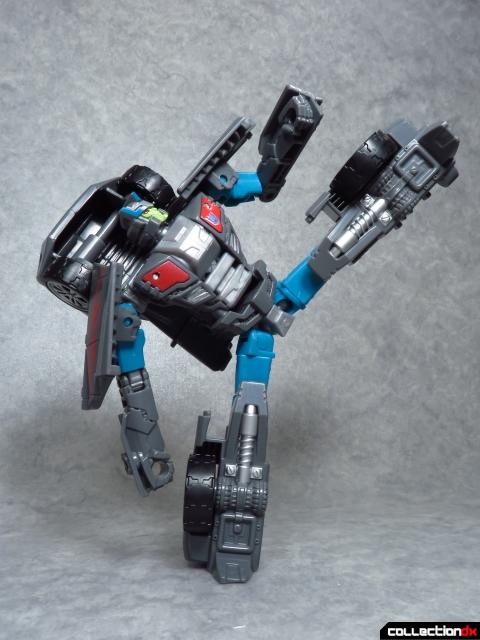 His joints are stiff enough to let him throw a high kick. 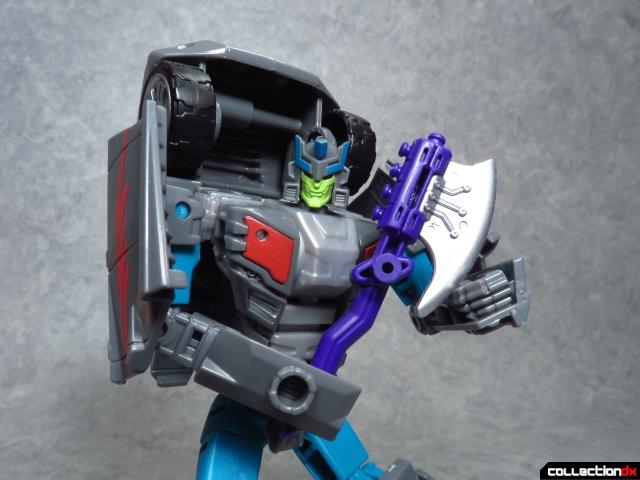 Offroad's weapon of choice is a purple battleaxe with a beefy blade. This probably isn't intentional, but the shape and color of the ax reminds me a lot of a Zaku's Heat Hawk. 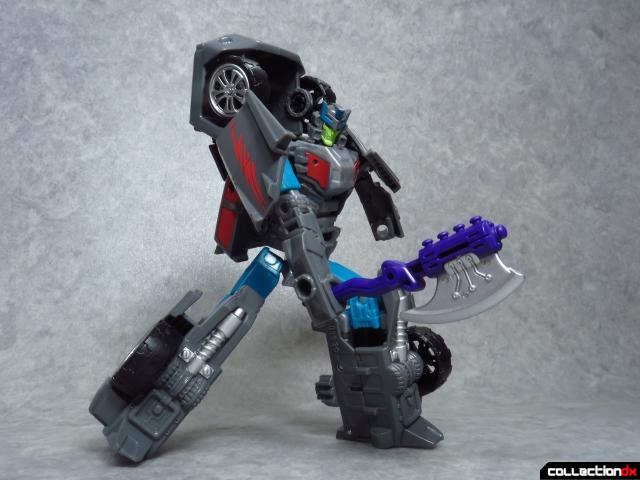 He's ready to give an unsuspecting Autobot the tomahawk chop! 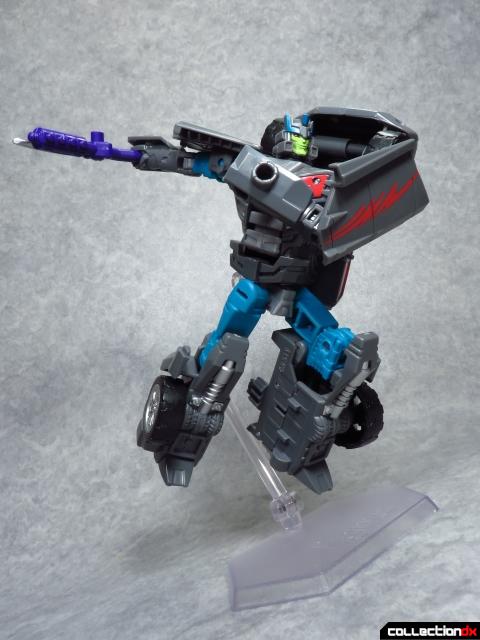 Like Dragstrip, Offroad has a hole in his pelvis that is the right size for attaching a Tamashii Stage, figma stand, or similar figure accessory. Although, due to how much his upper body hangs over this area, getting a stand plugged in there can be tricky. If you can get Offroad set up, the ground-pounding Stunticon can take a flying leap at his foes. 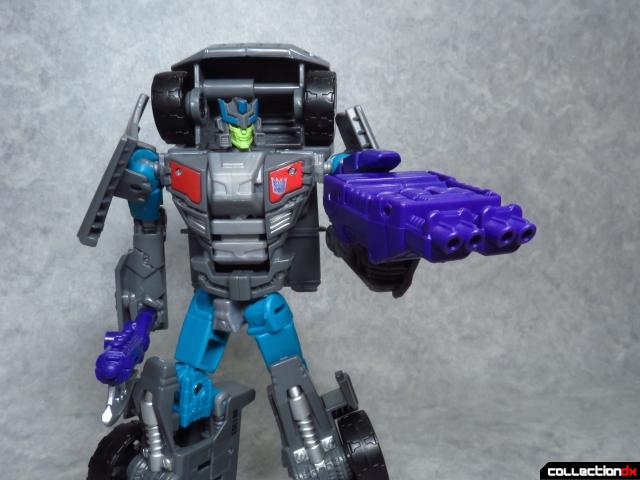 This toy's version of the hand/foot/gun combiner accessory is a doubled-up dual blaster. It will fit into any 5 mm port on his body. 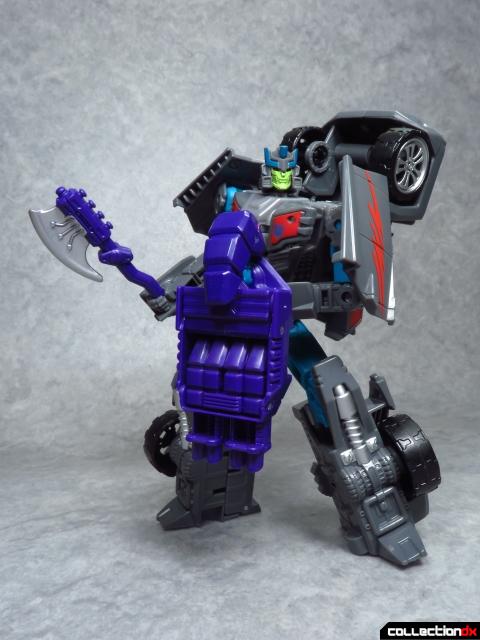 As such, I actually prefer using it as a handheld buckler to complete Offroad's image as a mechanical Mad Max baddie. 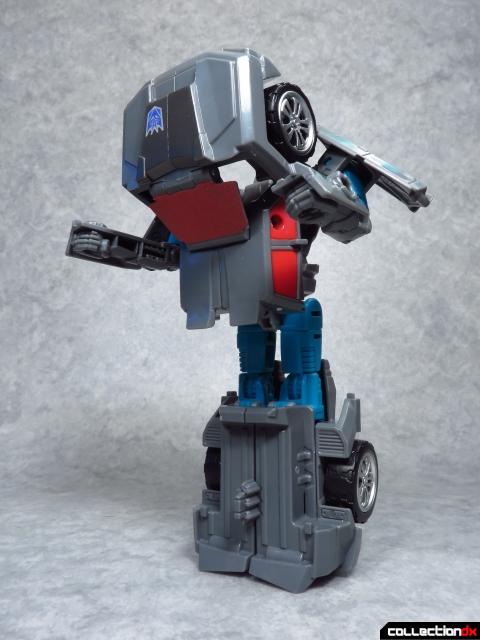 Unlike Breakdown, Offroad's transformation is pretty straightforward. To convert him into an arm, you simply flip out the combiner joint in his chest, bend his elbows backwards, and tab his legs together. Small slots on Offroad's forearms are meant to peg onto nondescript tabs on his truck cab. While this feature doesn't work perfectly on mine, I found his own arms still stay out of the way while handling Menasor. 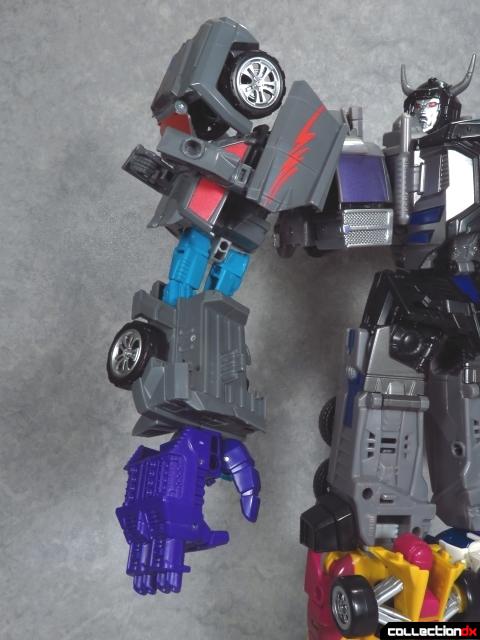 In keeping with the toy's overall motif, Offroad makes for a solid, no-frills arm for Menasor. 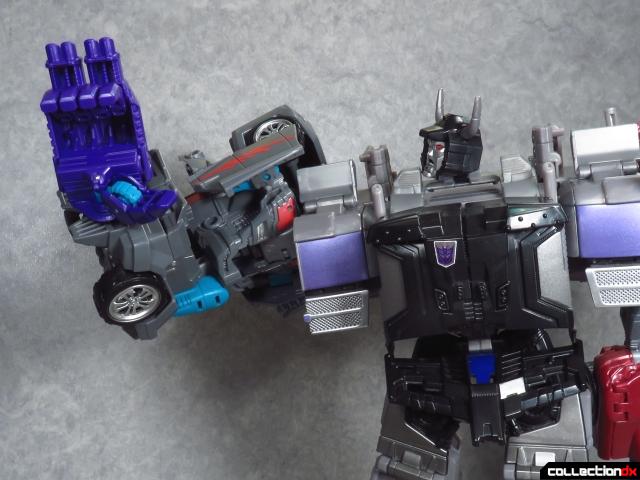 He provides the expected range of articulation for the combiner, with a universal shoulder joint, a bicep swivel, a movable elbow, and even a wrist swivel. 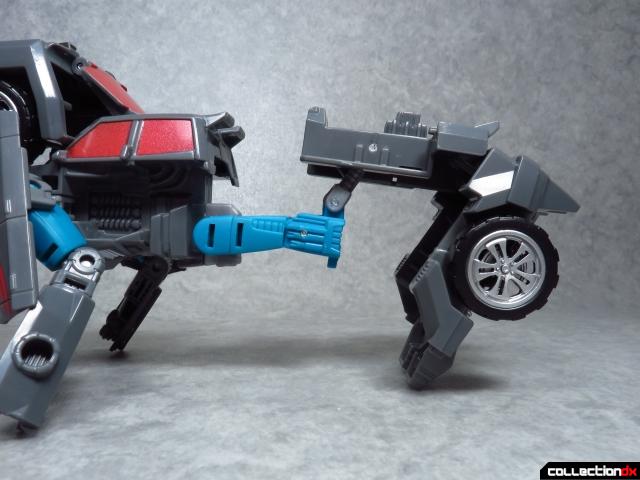 Continuing on to leg mode, Offroad uses an internal swing bar mechanism (similar to Alpha Bravo) to compress his legs. 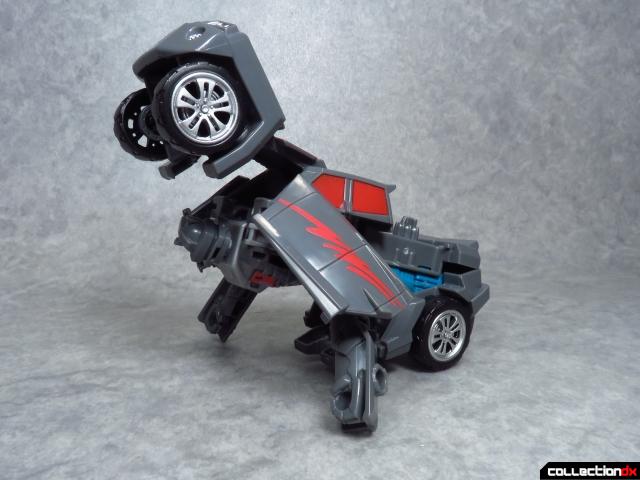 His arms then pivot down at the shoulder and plug into the space between Offroad's legs and body. 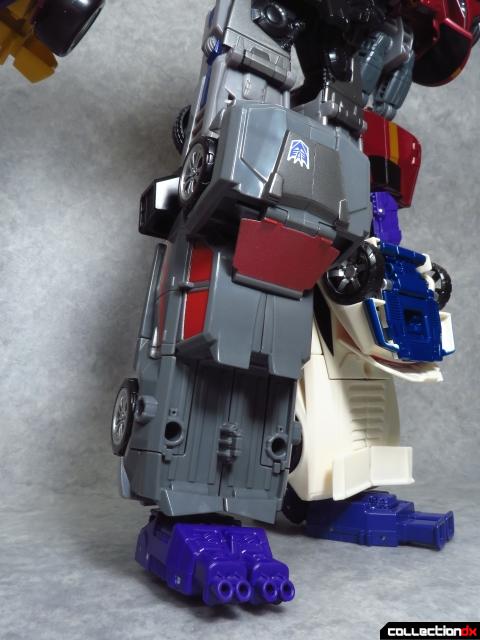 Offroad forms a solid limb for Menasor and does not have any issues with parts of himself banging into Motormaster's own foot. 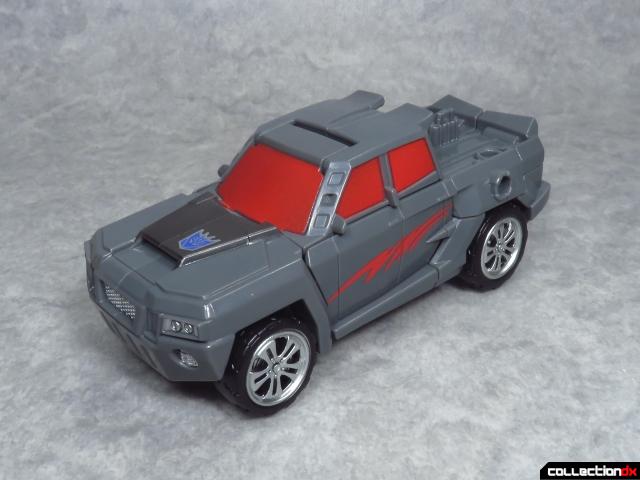 To finish off Offroad's vehicle mode, simply flip down the front of the truck and slot it into place. He makes for a attractive little pickup that is durable enough to hand to a kid without fear of anything breaking. 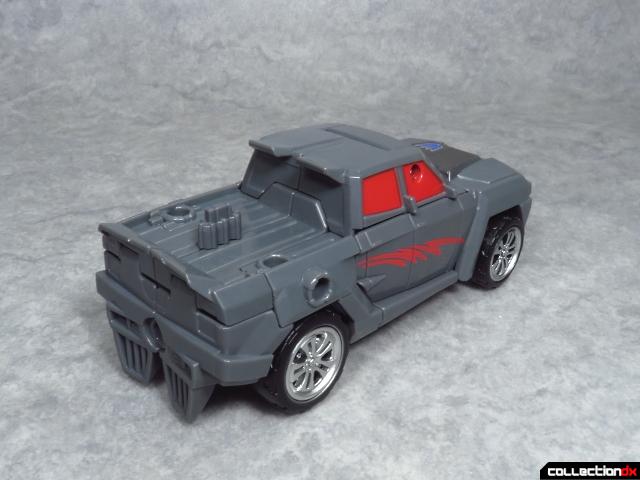 One mark against the toy is how Offroad's feet just chill out at the back of the truck without folding away. Honestly, though, it's a minor flaw that doesn't affect his ability to roll along the ground. 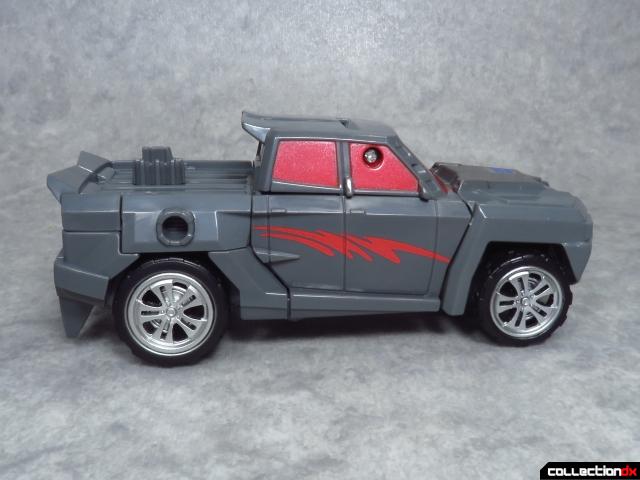 And I must say, I really did appreciate the gaudy 80's scribble emblazoned on Offroad's doors. 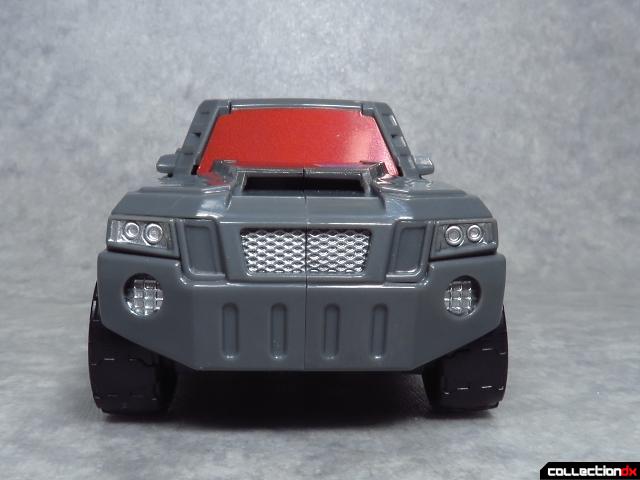 His front grille is also sorta jeep-like, which makes me think Offroad would make a good Swindle toy. 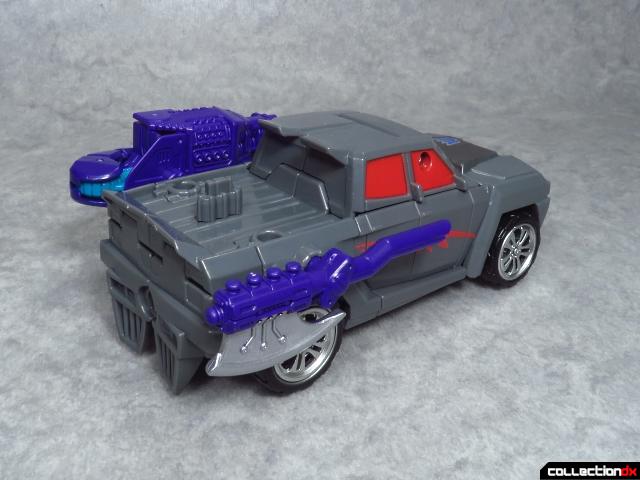 All of Offroad's 5 mm ports carry over to truck mode so he can take his accessories with him. 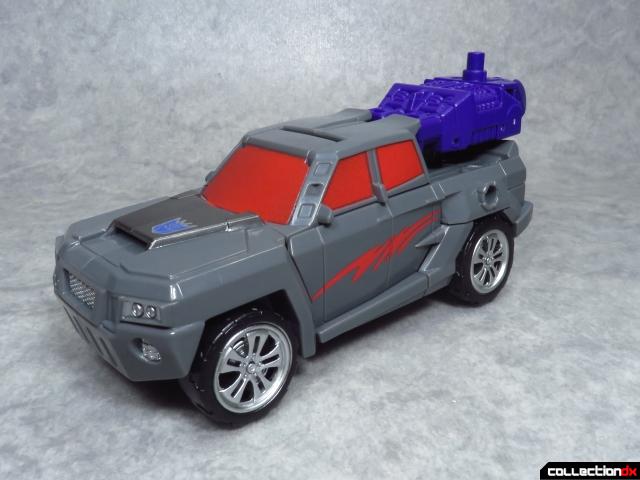 The combiner part has a slot in its fingers for attaching to the tab that sticks out from Offroad's truck bed. 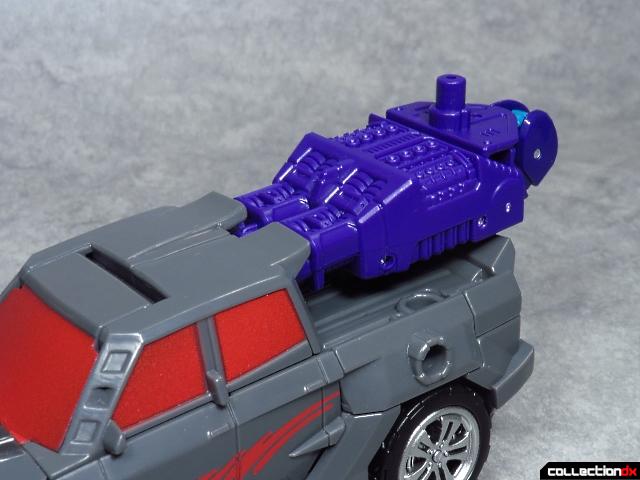 Taking a closer look reveals that this hand/foot/gun is styled like an engine, so think of this as a way of giving Offroad a boost of horsepower. 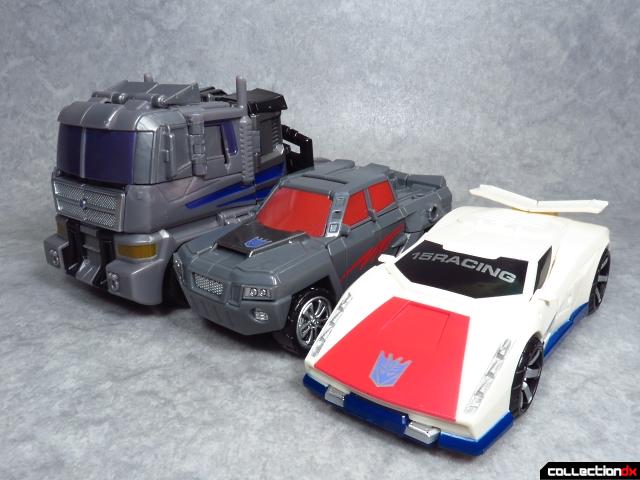 Offroad is very compact in truck mode, which in turn makes him the smallest of the team as a vehicle. Scaling is especially liberal when it comes to Combiner teams, so this is hardly an issue. 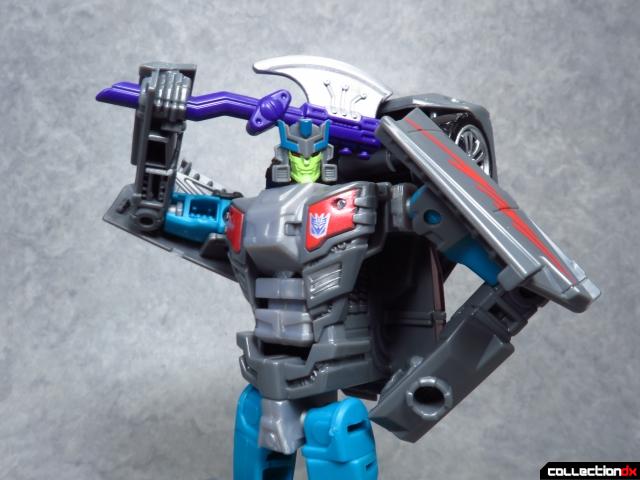 Transformers like Offroad and Alpha Bravo demonstrate that Combiner Wars can drop a new character into a nostalgia focused line and still produce a desirable piece for the discerning fan. Offroad is definitely a great toy on his own who also adds a nice bit of variety to the Stunticons. Even if you are planning on picking up Wildrider... I mean, Brake-Neck, this Decepticon truck is worth owning. And for me, I am extra glad to see some late G1 love in Offroad's subtle homage to my old pal, Ruckus.

6 comments posted
I haven't picked up any of

I haven't picked up any of the the Combiner Wars figures but I'm looking forward to First Aid mainly because I like him in that G1 episode "The Ultimate Weapon".

^ "The Ultimate Weapon" is my second favorite G1 episode, only behind "The Return of Optimus Prime".

As for Offroad, more than anything, I like his face. He just has this really pleasant, satisfied look that befits a Stunticon.

Ah those are some of my favorite episodes too!

The bio is what really made me fall in love with this guy. The idea of a new super chrasimatic Stunticon who is just a little too eager to replace Wild Rider just makes me wonder about how he stalked Wild Rider to the point of actually BEING Wild Rider.

But that's just me.

The Combiner Wars comics from IDW explained that Wild Rider 'quit' the Stunticons following their first Menasor stint in the ongoing comic, and Offroad's his replacement. Not as dramatic as Slingshot being near death, but a cheeky 'limb swap' to justify the new mold for every other off-road truck/combiner limb.

This figure looks good, but I'm holding off for First-Aid!

Yeah, I read that issue after I got the figure.