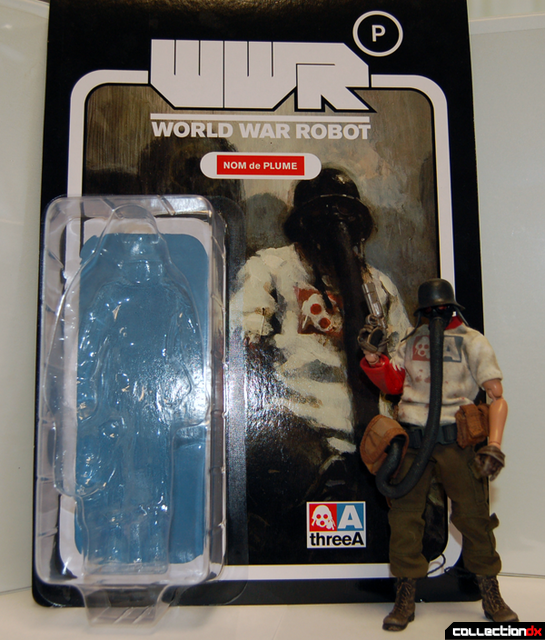 The mysterious Nom de Plume is something of the main character in World War Robot, and the 3A mascot, as well as one of, if not the most popular 3A design. The first 1/6 Nom de Plume came out as one of the first 3A toys, and is beyond impossible to find. There have been multiple variations on de Plume since his debut, including desert and snow versions, a black trench coated version, and a DIY de Plume (Do It Yourself) blank figure only given out as prizes. The 1/6 de Plumes set the standard for 3A’s character figures with their finish and detail, as well as being the most enviable of releases. Fortunately, the new World War Robot Portable line is making de Plumes attainable for us mere mortals in the new 1/12 scale. Unfortunately, you won’t find the standard Nom de Plume shown here, as he was released as the 3A Associates (3AA) exclusive club membership figure. More versions are on the way, though! 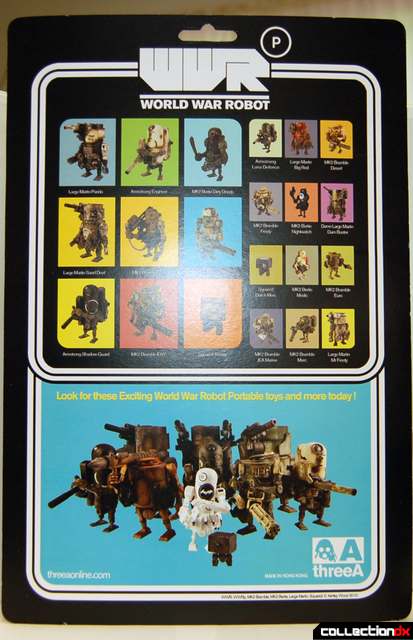 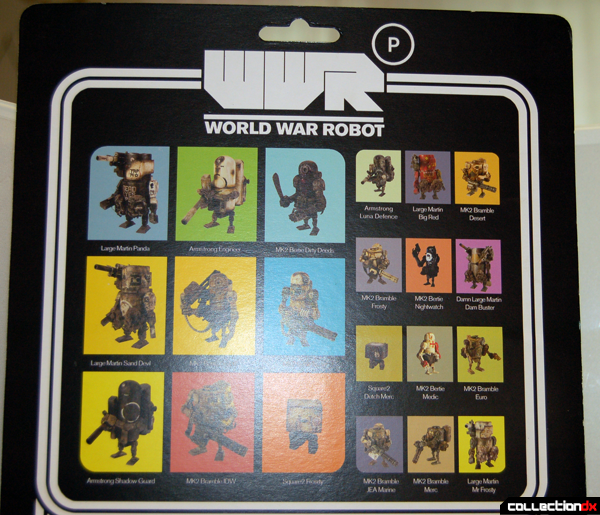 Nom de Plume (and future Portable Plumes) comes in a blister pack on a card designed to mimic the classic card backs of the original Star Wars toys. The graphics and painting are well printed, and the design is pure nostalgia. The back shows a range of Portable figures both released and upcoming, including the soon to be released Large Martins in 1/12 scale. One thing to note is that the figure cannot be removed without cutting or tearing the bubble, just like an old-school figure. It took me about ten seconds after mine came to have the bubble cleanly removed with an X-acto blade! 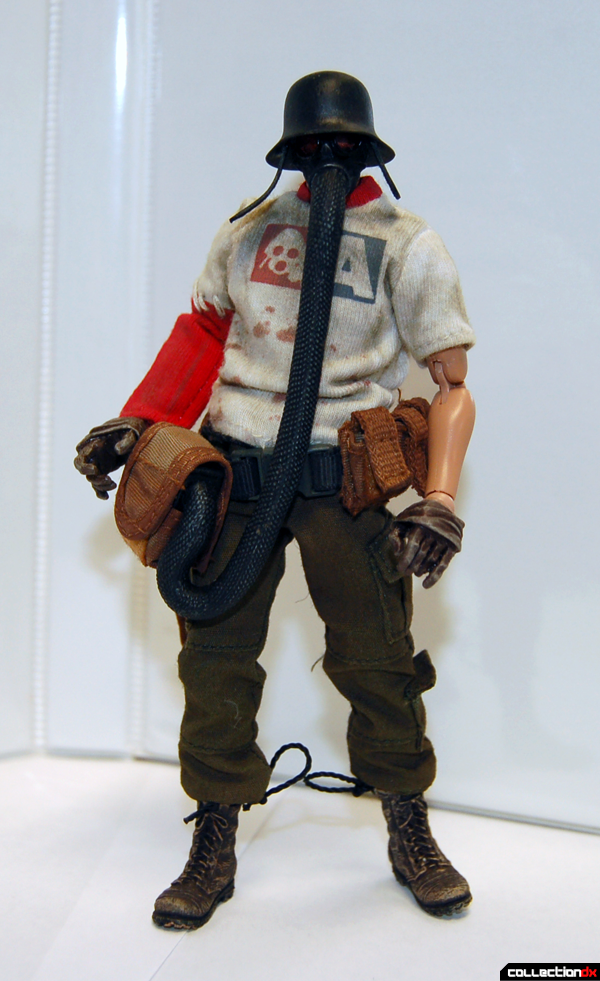 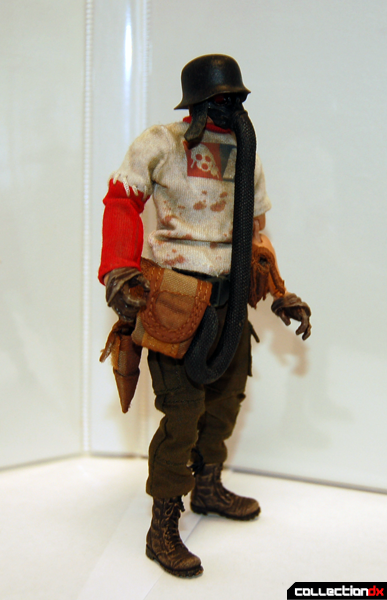 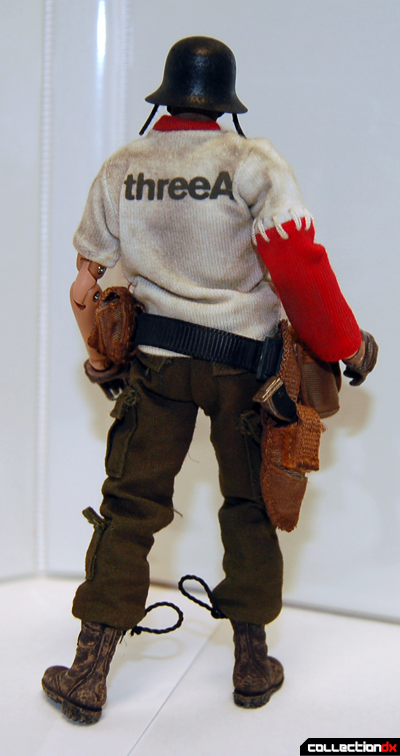 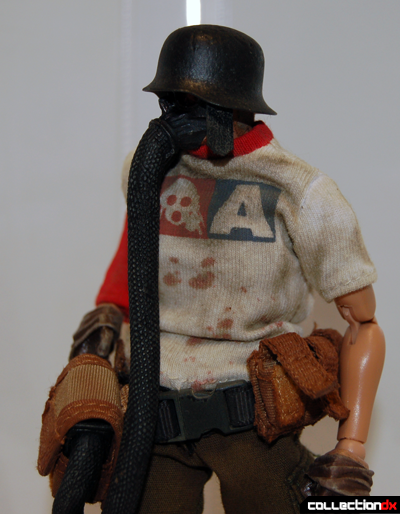 In order to maintain the trademark 3A level of detail, with fully working cloth costumes and 1/6 quality articulation, 3A designed an all new 1/12 action figure body from the ground up. The new 1/12 scale body stands 6 inches tall (duh :P), and the new body is effectively a Hot Toys True Type 1/6 body scaled down to half its size, and I’ve no idea how they did it (or who’s actually making it), but they need to keep doing it. The new figure body is amazing, and lays the architecture for many more 3A character releases based on the 1/6 toys. Someone also needs to license this new body from whoever is actually manufacturing it and make new Spiral Zone toys ASAP. 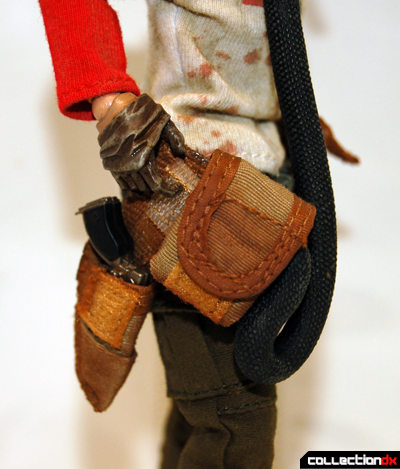 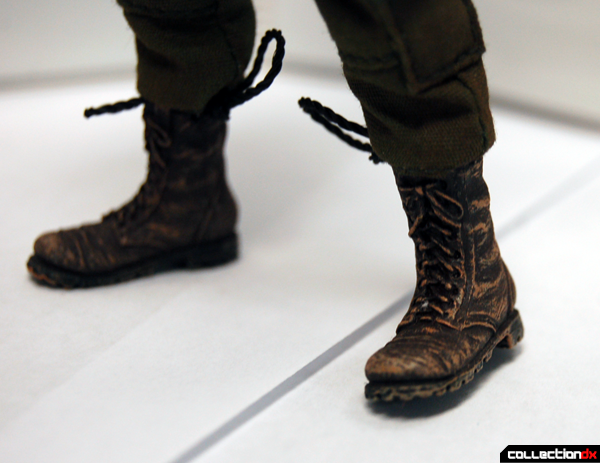 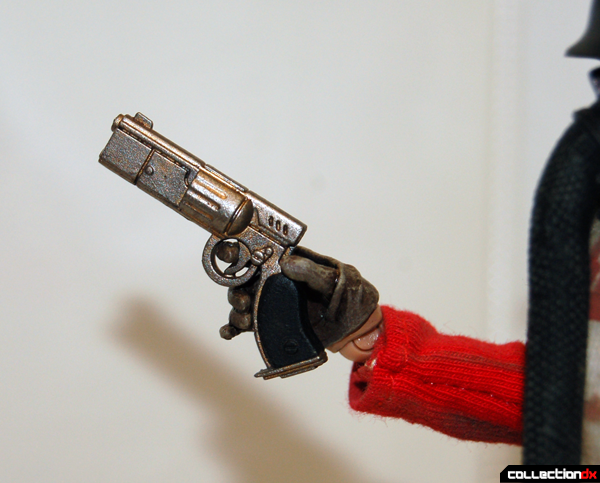 The Spiral Zone comparison is quite apt, as the new de Plume itself is obviously far more influenced by that toy line than Star Wars-type action figures like the packaging. Nom de Plume features a complete cloth costume including a working belt with opening pouches and a real gun holster. The detail is impeccable, even going so far as to include faux-leather straps on the helmet. 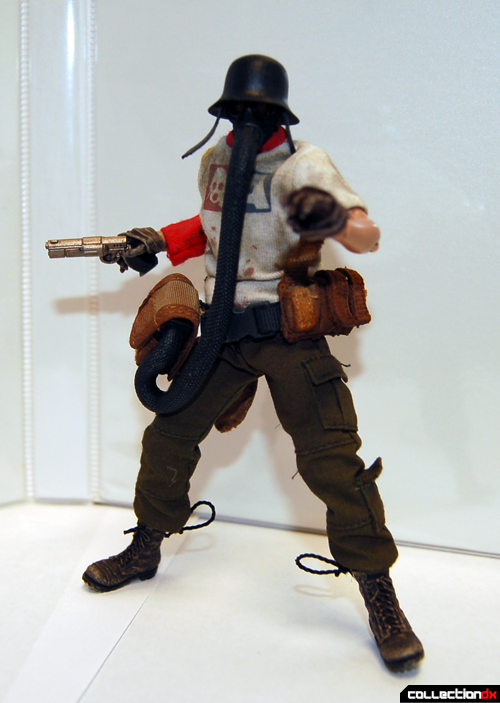 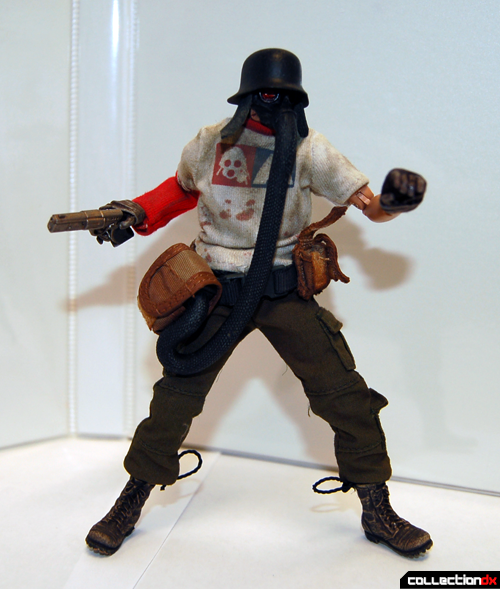 Nom de Plume as a character design is really quite striking, and this figure captures that excellently. Nom’s grim gas-masked visage with that massive breathing apparatus tube makes him a fearsome looking mystery. The 3A shirt with one extended sleeve and combat pants make for an eclectic design that has a little bit of a pop flair, while still fitting in as a mysterious operator in a war torn world. 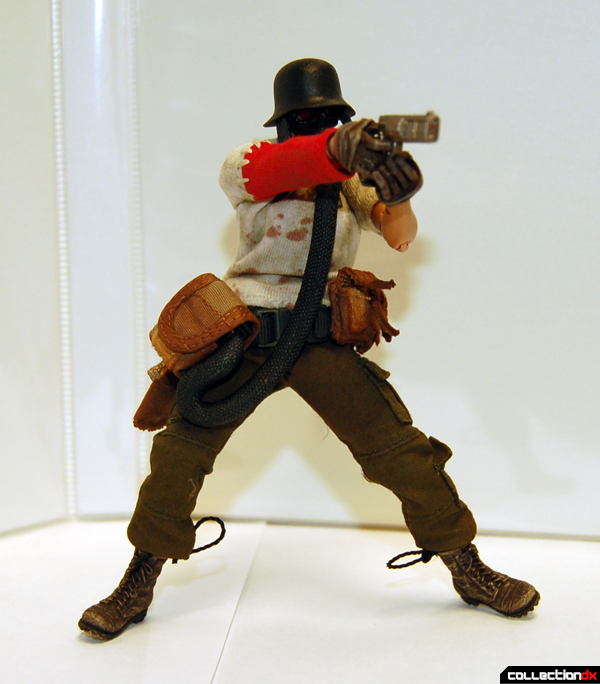 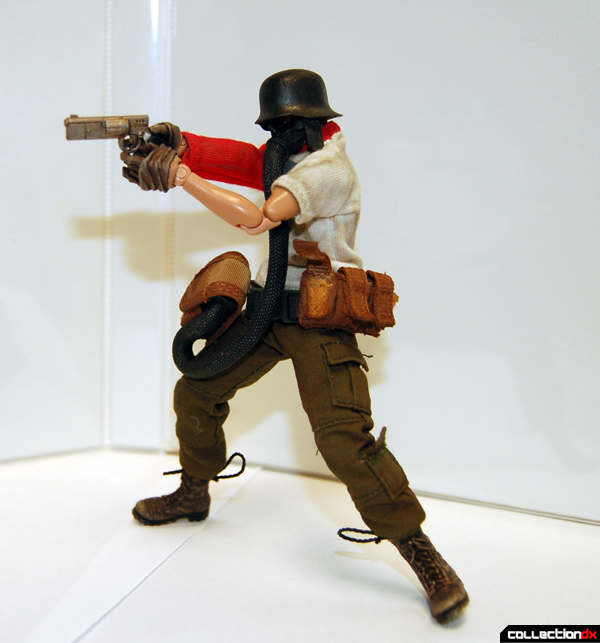 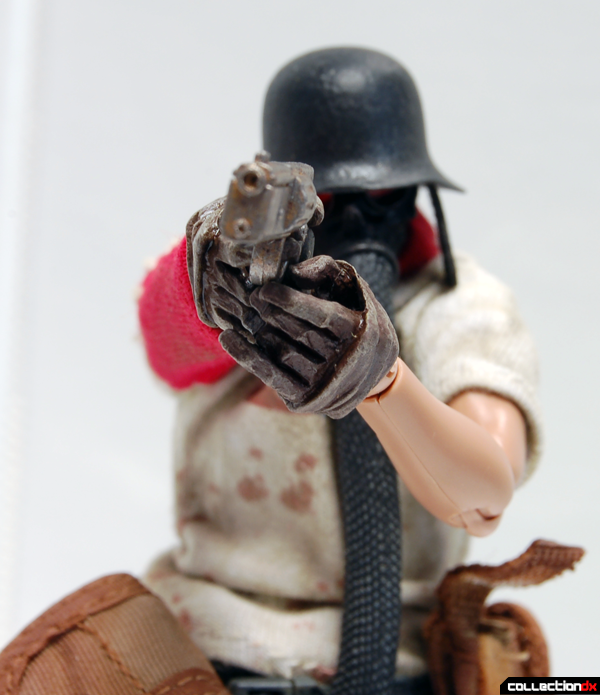 Thanks to the new 1/12 body, Nom can strike any pose you can think of, and look good doing it! There are no compromises on this guy from a 1/6 figure, and in 1/12 you can handle this guy and have a great time. The body features all of the articulation from the latest generation of 1/6 bodies, including complex multi-axis shoulders and excellent body/waist joints. Nom de Plume can look cool and natural while kicking your butt. The distinctive pistol fits a little loosely in the hand but the hands are very soft, so this could easily be fixed. The figure’s grip is still convincing, and the 1/6 level of articulation allows for some very natural and dynamic poses. 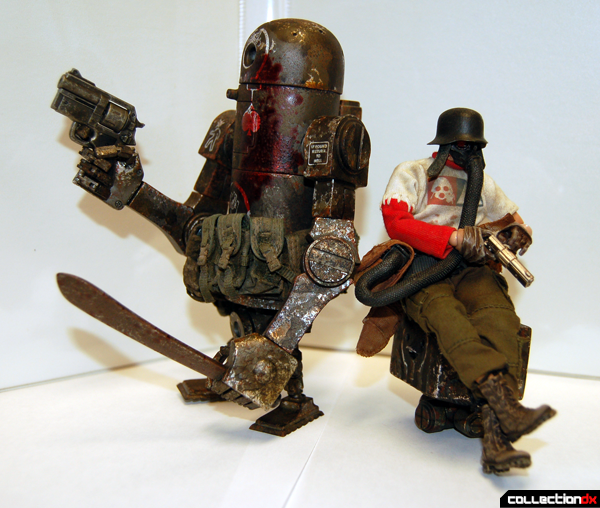 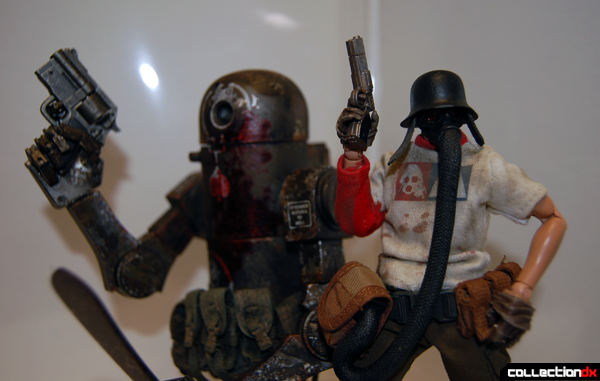 The best part of the new 1/12 character figures is obviously putting them alongside the robots! Having humans to march amongst gives the robots a sense of scale and heft that was missing before. In the fiction, Nom de Plume commandeered the 12 Dirty Deeds Berties en route to their mission to assassinate Rothchild. The bots disappeared for a while, and then reappeared under Nom’s control slaughtering troops seemingly at random: one day they’d support the Martians, the next the Terrans, always to prevent any decisive actions from putting one side closer to victory. I put my Nom with to the Bertie 7-Pack Dirty Deeds figure, since that’s the only DD Bertie I have, and they look great together. 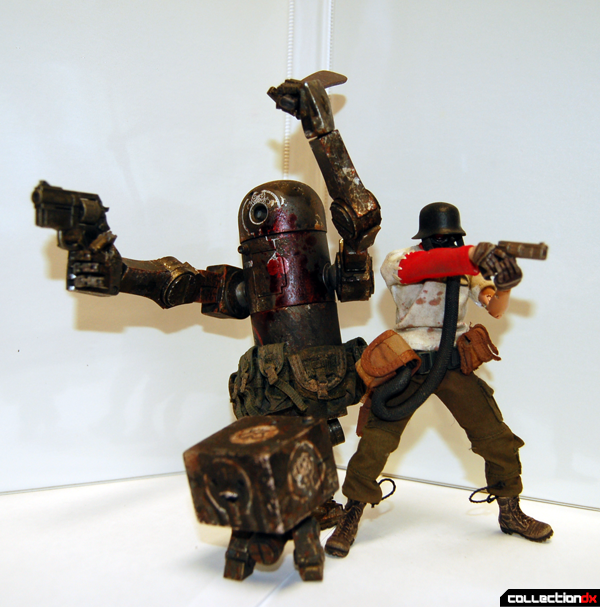 There’s no denying that the exclusivity of 3A toys and their awkward release style can be a turn off. I preordered this set when I joined the 3AA club back in January, and the box only just arrived in July, even though it was initially slated for a March release. I will talk more about the long term preorders direct from 3A and their continuing missing of promised ship dates in upcoming reviews, but it is something to be aware of if ordering direct. Many 3A toys also get sold through retailers like Sideshow toys or Big Bad Toy Store, so if you’re looking to buy some 3A products, those retailers might be a safer bet, since they don’t post preorders until far closer to the supposed release dates. 3A toys are highly limited, but if you are on top of the ball for when a release happens, they are not impossible to get. We should see some more readily available de Plumes in the future, and I’d highly recommend trying to get one. If you’re into the detail and quality of 1/6 figures in general, but not the price, or if you’re into 3A toys, the new 1/12 character figures look to be a great buy if this first one is any indication. And please, someone needs to use these bodies for all sorts of different properties immediately! 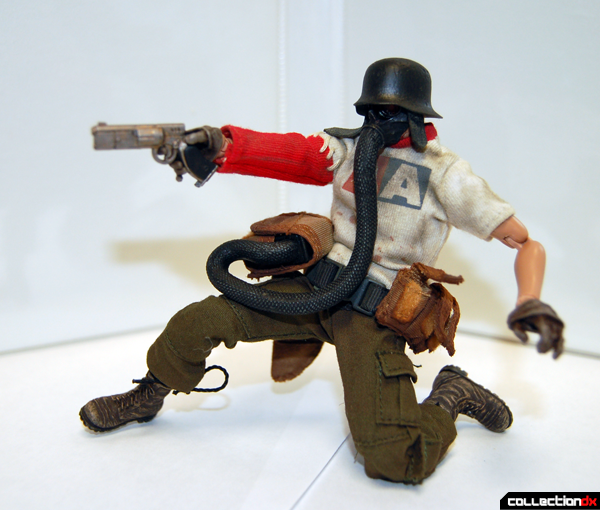 Braving the harsh environment of war in your own custom t-shirt is total class.

The ebay referral thing at the bottom indicates that there are a few Noms up on the 'Bay right now... going up quickly. Keep in mind, the whole membership kit with a personalized member card and special T-shirt in a nice box only cost $125.

Wow, that's friggin' cool. I completely agree that new Spiral Zone based on this body would totally rock, especially if I could get ahold of them easier.

I can't believe a 1/12 figure looks this good. The fit and finish on the clothing is perfect. The belt buckle is predictable oversized, but that shirt and pants look better than a lot of sixth scale gear, and the mix of plastic and soft goods in the outfit and gear is perfect. My mind is blown.

I just got home from our 3A Beijing show, I did with Ashley.
He gave me a variant Nom de Plume in Greyscale colouring, again with the classic Star wars packaging.. They are beautiful.

The 'Gathering show was a huge success, and there was even a 1:1 Popbot!

The 3A catalogue book is excellent too, and highly recommended!

I was listening to the VOTOMS OST as I scrolled through this and read about the comic. Now I really want to check it out.