When the first GI Joe movie, Rise of Cobra, came out I wasn't entirely that excited. As a child of the 90s, who was raised on giant robot cartoons the adventures of regular people just didn't seem that interesting to me. It wasn't until the awesome Pursuit of Cobra toyline and the following 30th Anniversary line of GI Joe figures that I was really hooked on GI Joes and the ruthless terrorist organisation Cobra.

Perhaps one of the biggest things that I missed regarding Rise of Cobra was the crime against humanity that is the ROC Snake Eyes design. Like all kids, I thought Snake Eyes always looked pretty cool in almost every incarnation. However the overly bulky and muscular suit that was the Rise of Cobra design just lacked that finesse or stealthy build that a ninja-commando should have. As a smart guy said to me, "putting lips on Snake Eyes is like this decade's version of giving the Batman suit nipples".

And then, the first trailer for GI Joe Retaliation happened. The trailer alone had me rather excited for the movie, and then we saw the backside of Snake Eyes I immediately perked up and noticed that that suit wasn't the same suit from the first movie - it actually looked good! Between watching Snake Eyes unsheath his sword, battle against Storm Shadow, and ride a super cool looking motorcycle, I was stoked and immediately knew that I NEEDED a toy of this new Snake Eyes. So when the first wave of new GI Joe Retaliation toys started showing up I immediately picked up the Snake Eyes action figure.

Unfortunately upon closer inspection I realized that the first wave Snake Eyes was based more on concept sketches for the movie design and was not entirely accurate to the movie. The movie accurate figure was going to be included in the second wave of figures known as Ninja Duel Snake Eyes. Of course I figured this out right after finding out that the movie was going to be pushed back nine months along with the toys as well.

It has been a soul crushingly long nine months waiting for a movie accurate Snake Eyes to say the least, but now that I have him in hand I can say it was all worth it. 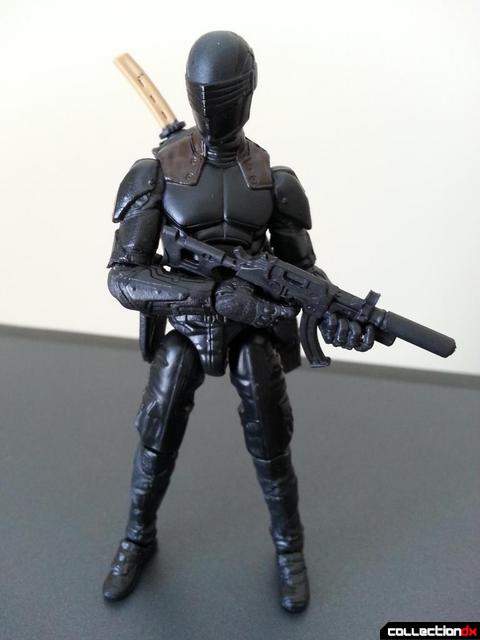 Ninja Duel Snake Eyes is almost everything you could want for a more realistic version of the famous ninja-commando. He's stealthy looking, well armored, but still sleek in appearance. It's near perfect I could say. I took some time to compare this tiny 3 3/4" figure to the Hot Toys 1/6 scale figure coming out and I have to say a surprising number of details are incredibly spot on to that much higher end figure. Considering it's a $10 toy, I think it's right on the mark. I know some people have complained that he is in fact almost too sleek if a little skinny in the legs, and I can't disagree with that, but when you're posing this guy it's not a very large concern at the end of the day. 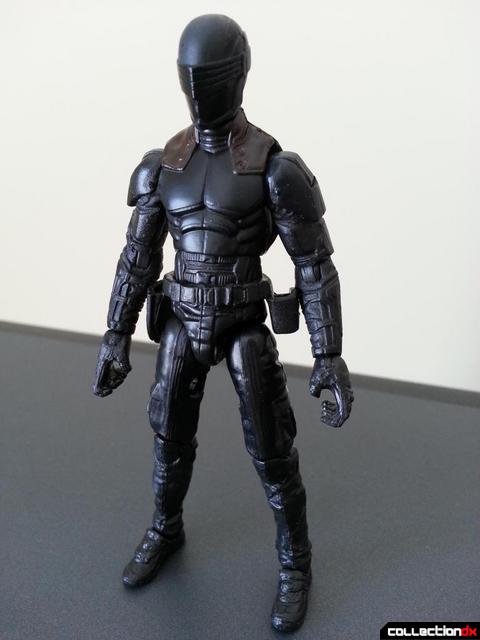 His belt has some nicely sculpted details on the back including a small pouch and what looks to be a tiny knife of kunai. 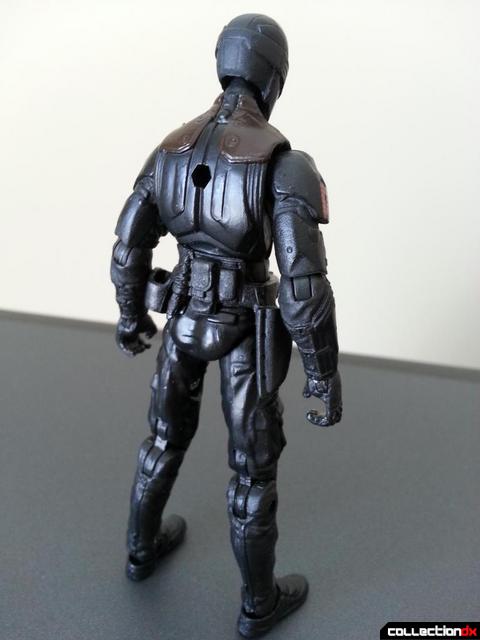 The headsculpt is smooth and crisp. It's minimal in details, but effective at looking the part. The brown leather shoulder pads help break up the monotony of the otherwise simple paintscheme. 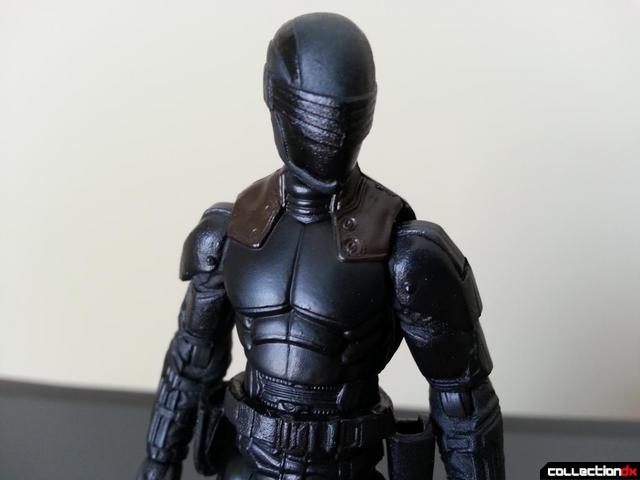 As a newer GI Joe figure, Snake Eyes has loads of modern 3 3/4" articulation that makes him fun to pose: double jointed knees, ankle rockers, and wrist hinges are all free and uninhibited by the clean and simple sculpting. He can even rub his belly and pat his head at the same time! 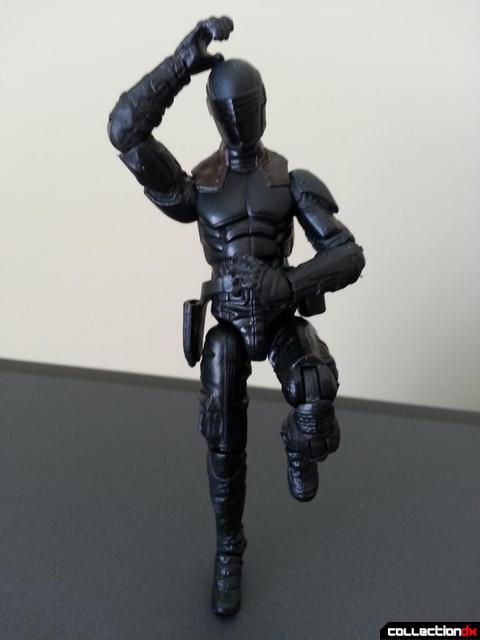 Hasbro has stated before that they will give extra articulation to the figures that need it for GI Joe, and I am really glad that means almost all ninjas have ankle rockers. It helps them maintain a more wide-legged and dynamic stance. 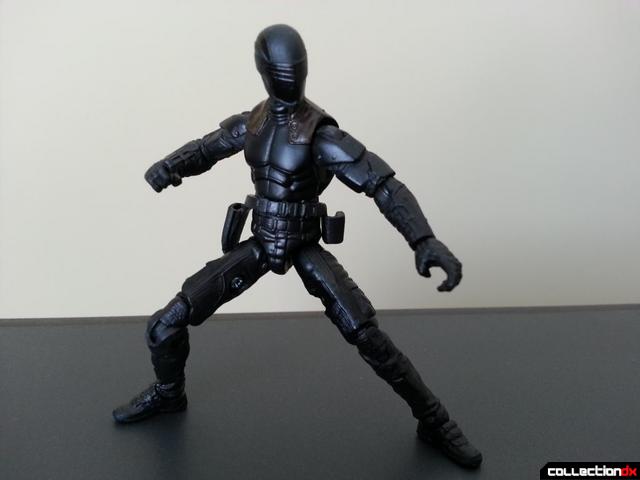 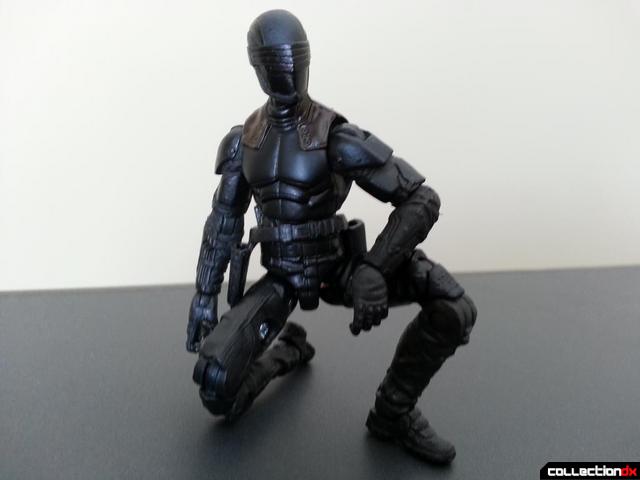 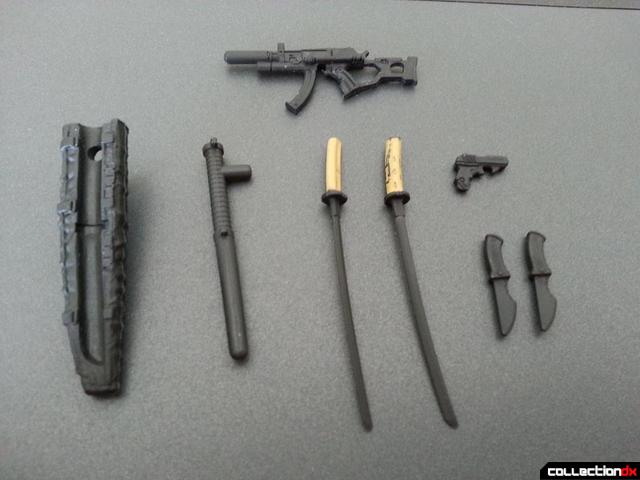 Snake Eyes has a small knife and handgun that can fit into his belt snugly. 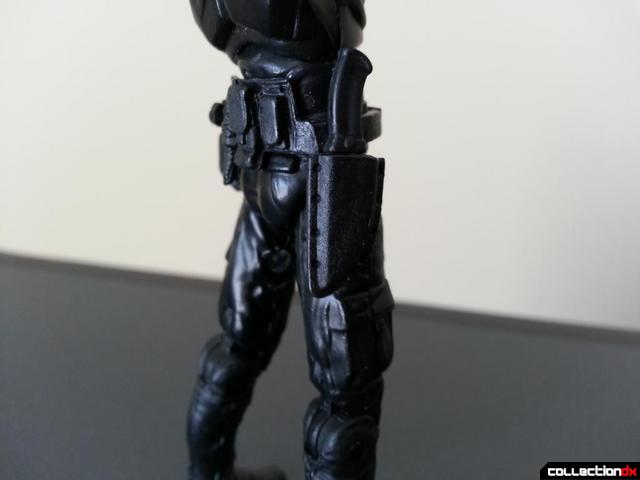 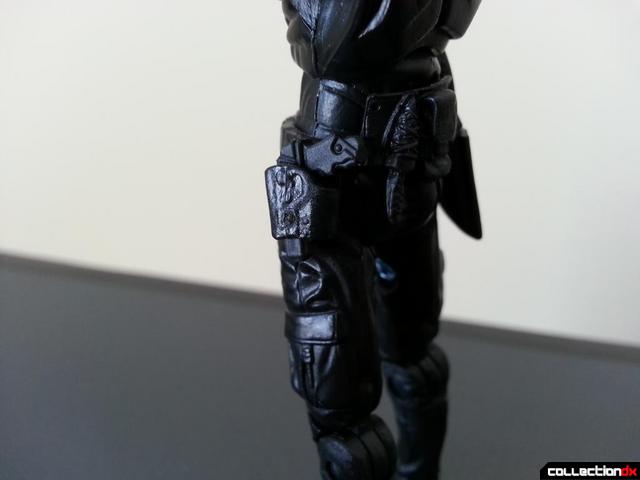 He also has a standard sheeth for his sword like most Snake Eyes tend to  do.  The wrist hinges make him able to much more convincingly pose like he is unsheathing his sword. 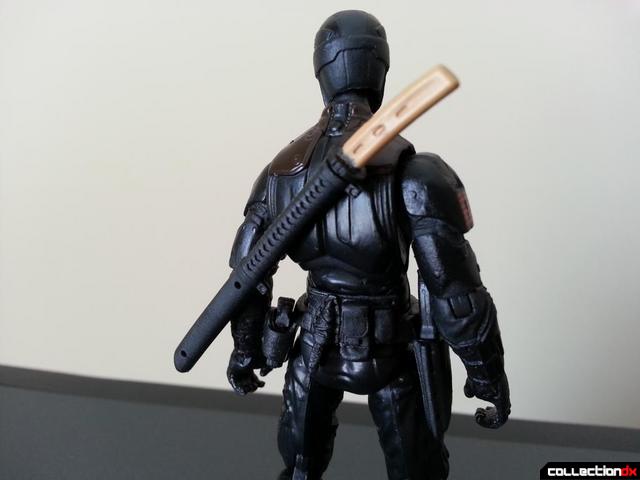 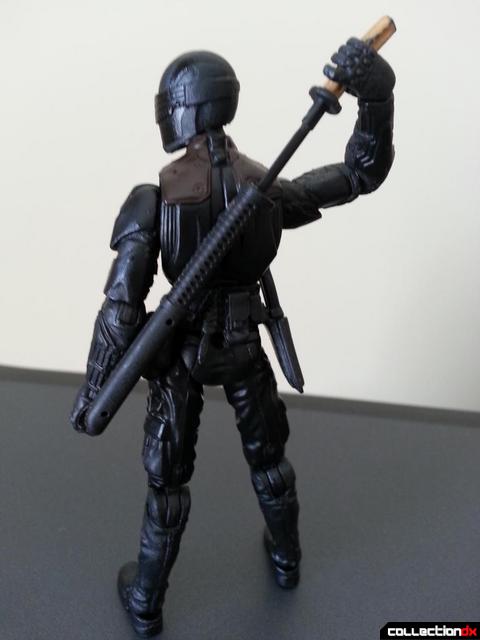 Also included is an additional sheath piece which the sheath can plug into. This is apparently accurate to the movie's sheath and that's the most I can say about it. At the very least, it's well sculpted. 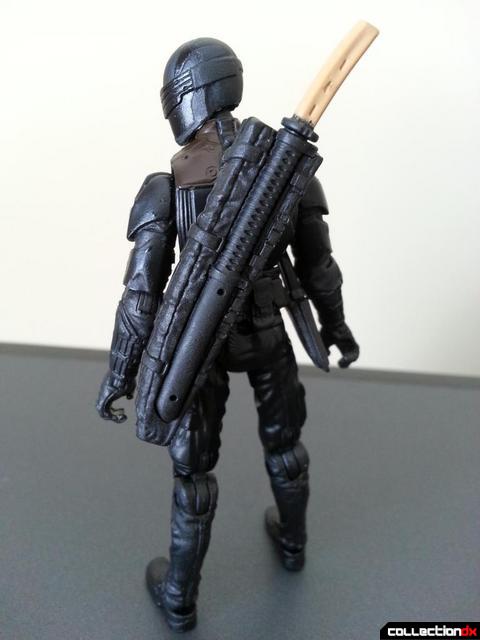 In addition to a bunch of sharp pointy objects, Snake Eyes also has a rather impressive looking gun. I have no idea if it's based on a real life gun, but between the shoulder stock and silencer, it looks perfect for Snake Eyes.

Snake Eyes actually comes with two swords and two knives. Now usually it annoys me when a GI Joe comes with too many accessories to hold, but in this case I don't really mind. I don't think of it as "Snake Eyes has two knives and two swords", but instead I think of it as "Snake Eyes has an extra knife and sword incase I lose one". At least for me, keeping that in mind makes me a lot less annoyed that Snake Eyes doesn't have enough hands for all of his weapons. 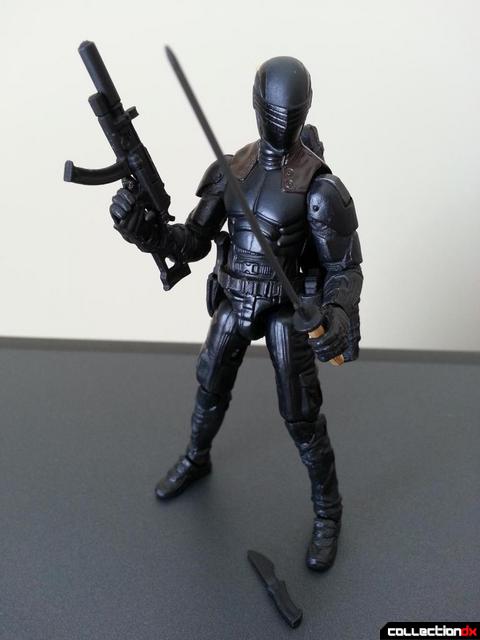 Also included is a ridiculous missile launcher. A lot of movie GI Joe figures (Heck, all movie Hasbro toys) tend to come with a giant missile launcher of some sort to entice the kids. Snake Eyes is no acception to this rule. 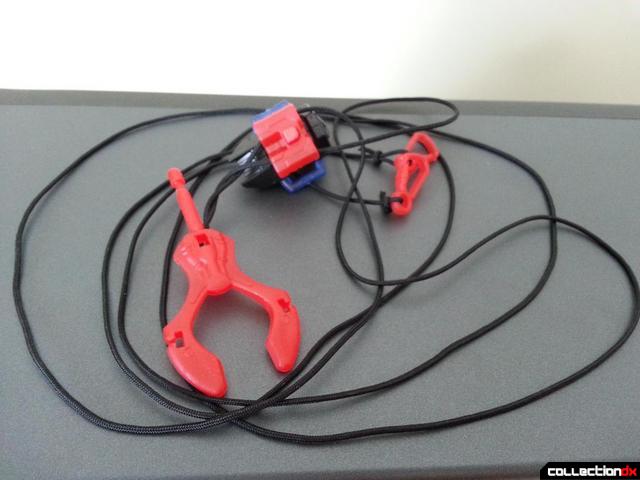 You can clip it onto his arm or make him hold it with the handles on the side. Either way it looks silly. 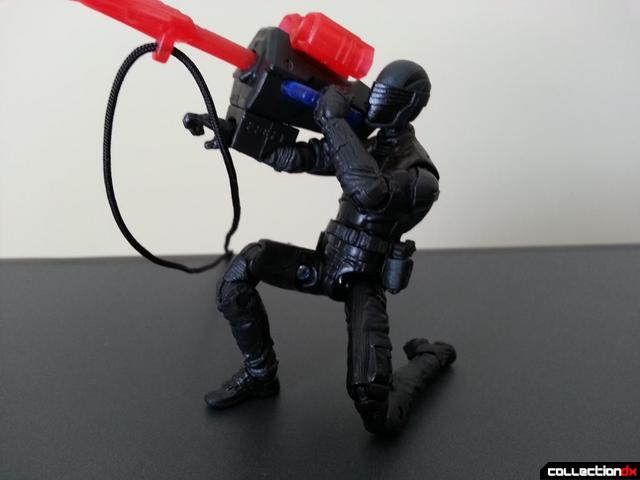 The missile also includes a string so you can use the missile launcher as a zipline for the toy. Although incredibly silly, it was definitely fun zipping this guy across my room on a string. More fun than it should have been to say the least. 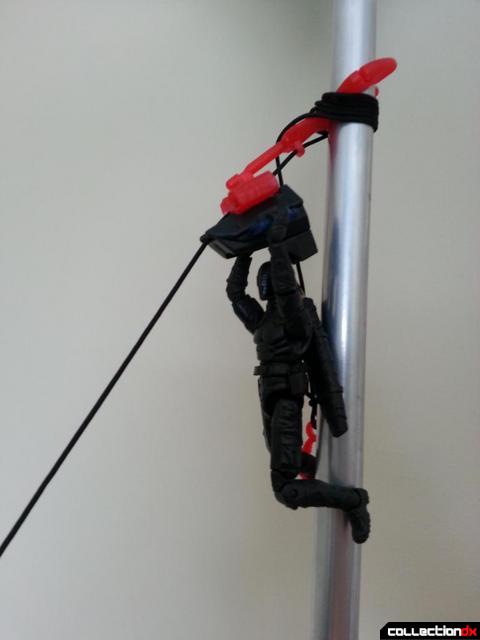 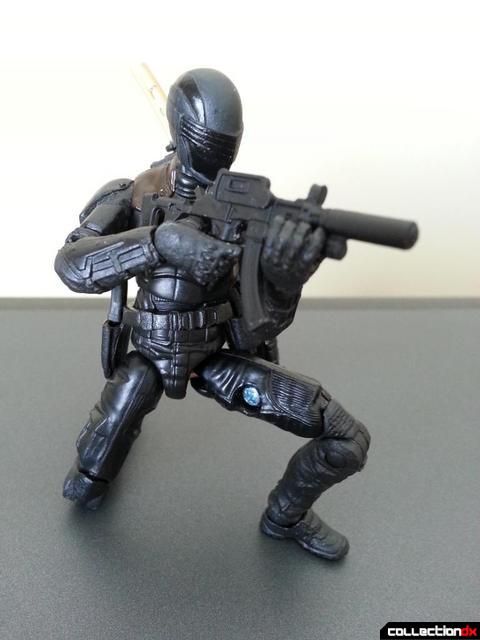 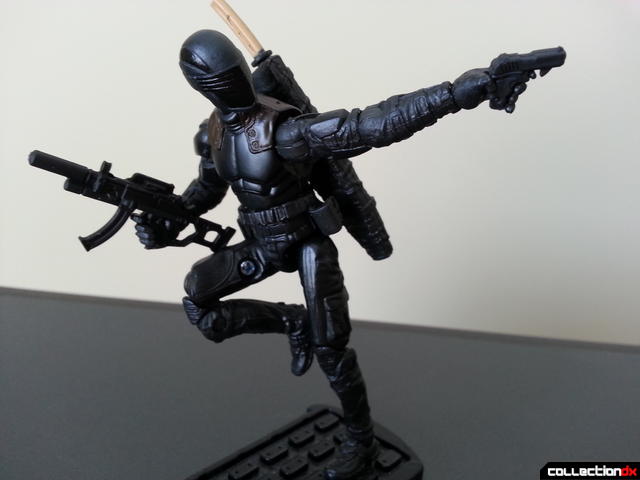 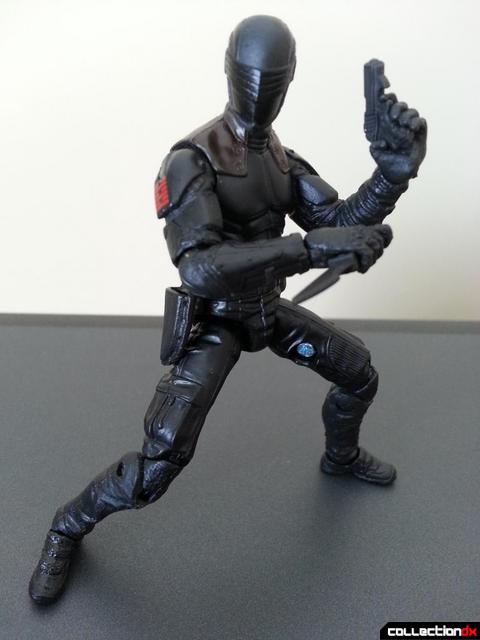 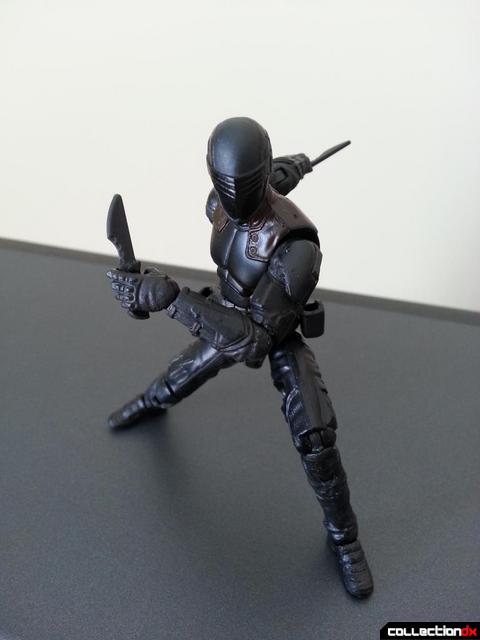 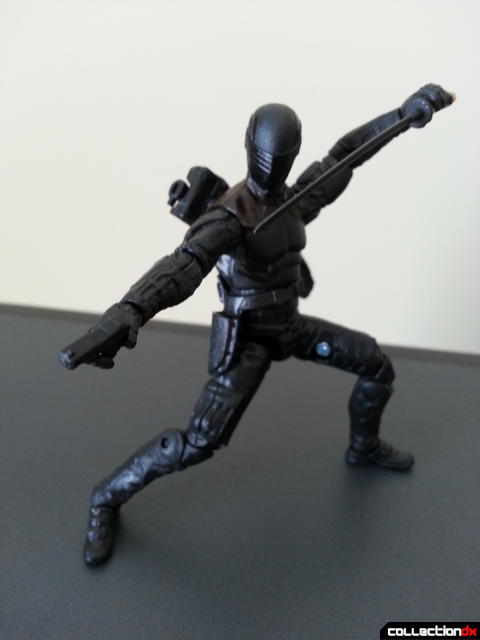 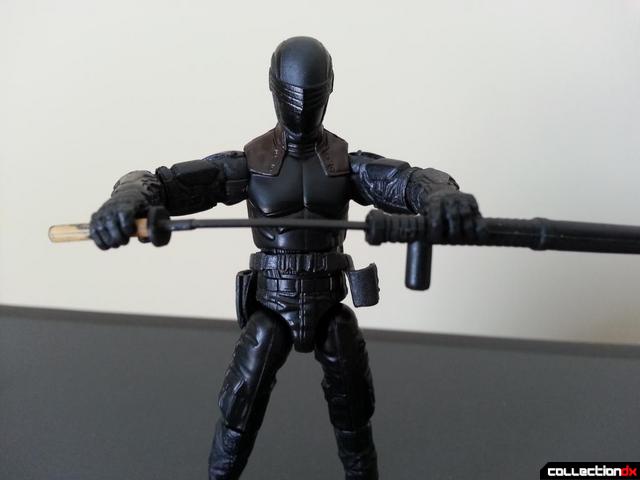 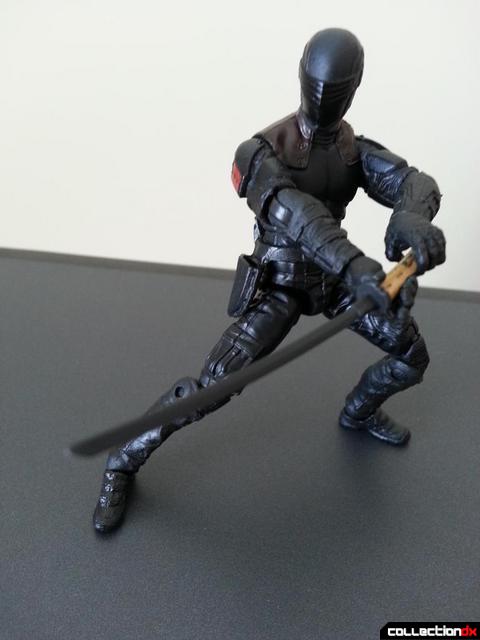 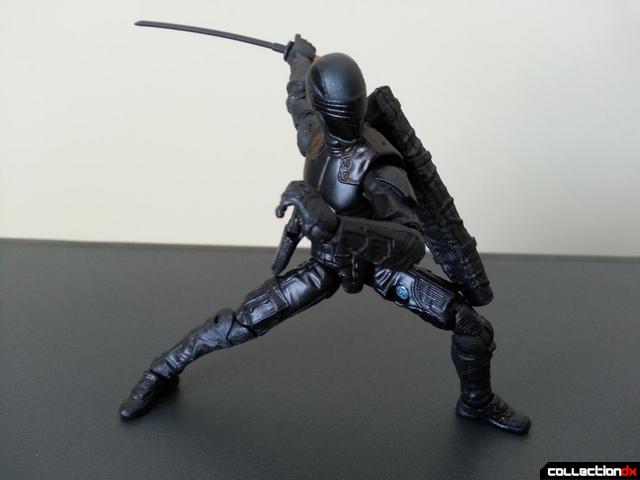 He even has enough  articulation to reach for his knife! I can not tell you how much this excites me. 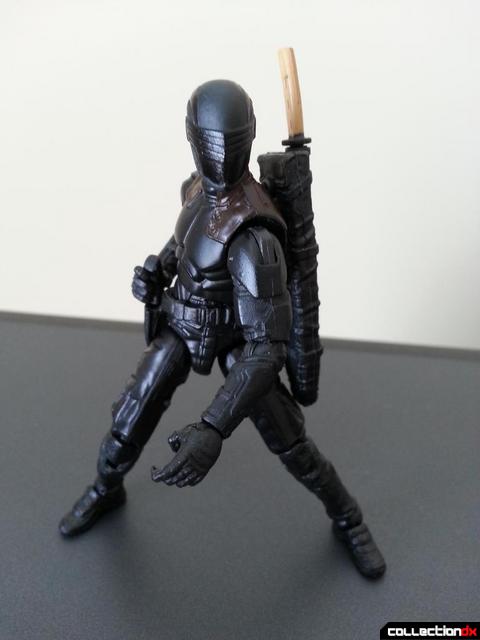 Your options are quite large with this guy.

At the very least, GI Joe Retaliation has already succeeded in two regards: 1. It has made me very excited in hype for the movie. 2. It's made me buy a load of toys in hype for the movie. And among all of the GI Joe figures I've bought, this is my favorite from this line so far. He's a downright sexy 3 3/4" sculpt with loads of articulation and awesome weapons. It looks great, poses great, and is just incredibly toyetic when in your hands. This has been the one figure I have gotten recently that I can not put down, and that's even when compared to more expensive Japanese toys too. There's just something so oddly simple and pleasing about playing with this guy that makes him my favorite Snake Eyes ever.

Or at least until the next Snake Eyes figure comes out.

6 comments posted
Yeah, I love this guy! As

Yeah, I love this guy! As usual they always manage to make Snake Eyes awesome. I hate to keep buying the SOB, but he always manages to impress me. Kinda wish they would stop putting thier accessories in thier hands in-package though...ruins the paint on the handle. Small potatoes, though.

As for the Snake Eyes lips: It ain't new! Take a look at Snake Eyes v2 from the 80's. LLLIIIIPPSSS. They've also done it a few other times over the years, for some reason. Always unsettling.

I was unlucky/lucky in that only one of my swords had slightly tacky paint on the handles. So what I like to do is use that one for when he's posed with the sword, and use the in tact one for display only when it is in his sheath. That tends to work pretty well.

And as for Snake Eyes having lips before, I guess that just goes to show how much I know about vintage GI Joe, huh? Haha.

I have to point out that no, Snake Eyes never had lips. What he had was an outline of lips, which what you would see if someone had a tight mask on. Never did any of the toys sculpt actual lips, never did any of the artwork display true lips, simply the idea that he had lips underneath the mask.
My guess is someone on the Rise of Cobra design team saw either some toys, or some artwork and made the same mistake Alexx did, which was see them as sculpted and exposed lips.

Now I have to buy one.

I like the sculpt and the accessories... at least the normal sized accessories, really like the brown shoulder pads. Though I'm changing out those legs or at least the thighs cause they look like G1 Joe legs that have no muscle tone, keeping the feet for sure with that range of motion.

But i must say I'm very happy with the POC Snake-eyes V2..... its way better than the first 25th edition and I think its the ultimate due to accessories, sculpt and includes two heads.. after the first version (commando) & popular second version (cartoon). Heres the reviews below:

I think between this, the POC, and the upcoming Ultimate Snake Eyes, we will have three definitive Snake Eyes that can all serve a different purpose: the perfect realistic version, the perfect movie version, and the perfect cartoon version. Between the three, I don't think Hasbro needs to make more Snake Eyes, haha.