Digging through a bag of miscellaneous toys a few months ago in my garage I came across this “swap meet” version of Nikick from the anime series Super Dimension Century Orguss. My parents had bought this for me at a local swap meet back in the 1980’s and although it was an inexpensive station type toy I loved this figure. This was my first exposure to Orguss anime and I thought it was great that this skewed vehicle looked somewhat like my VF-1 Valkyries from Macross. Later, I discovered that the same people who produced Macross designed it. 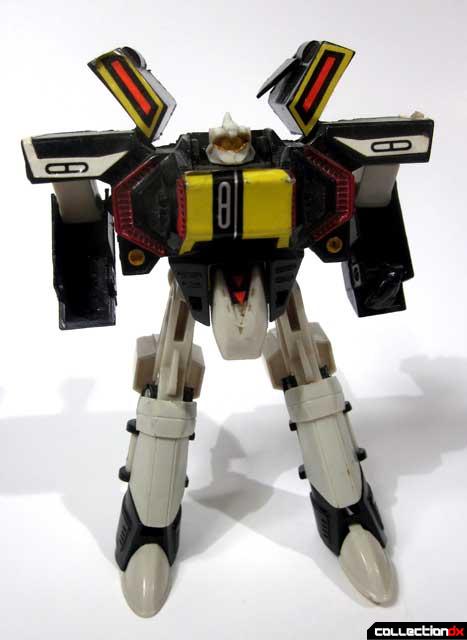 I am sure that this is a copy of an official Japanese release. It came in a great little full color box that has long ago been thrown away. Nikick also came with the anime correct laser rifle that I know I still have but I cannot seem to locate. Sadly the only piece that is missing is the fist that holds the rifle. Since it was played with as a kid it does have some broken parts as well. 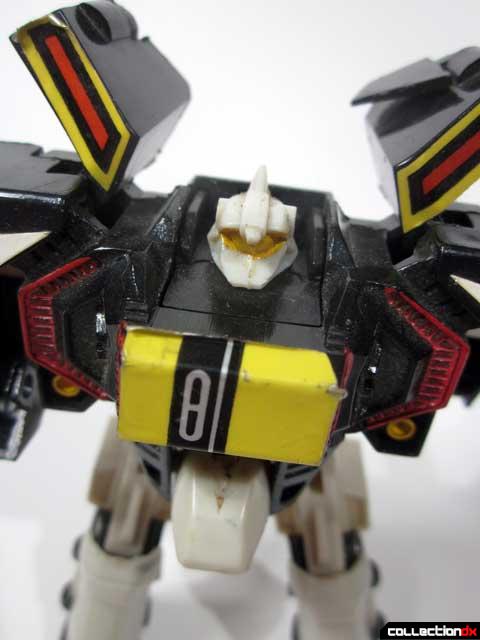 I have always loved the vehicles from Orguss as although they are real robot inspired they are just slightly outside the realm of possibility that make the designs quirky and near fantasy. If there were such a term as Real Fantasy then Orguss would be the best example of the genre.

Nikick is a great example of this style of art design. Nikick has all the trappings of the VF-1 Valkyrie such as a flyer mode, a gerwalk mode and battloid mode, yet each mode looks like nothing I had ever seen before.
Without the aid of the anime to watch in the 1980’s I had to use my imagination to figure things out. I did make some good educated guesses. Since it was black and somewhat sinister looking I figured out that it was the antagonists vehicle from Orguss. A female pilot named Athena, who is one of the lead antagonists of the series, piloted this particular Nikick. Athena was pictured on the box and she did not appear to be a “good girl.” 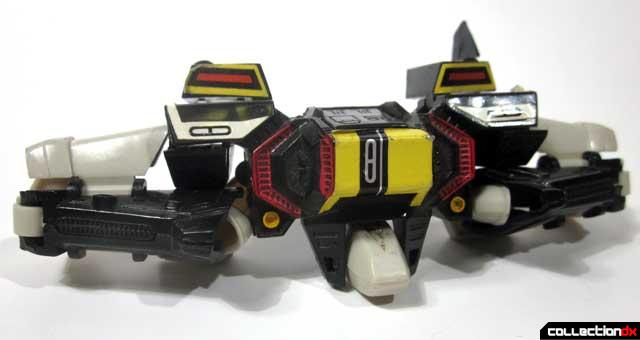 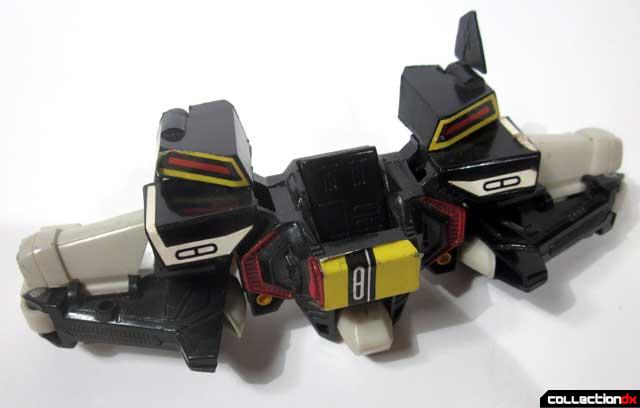 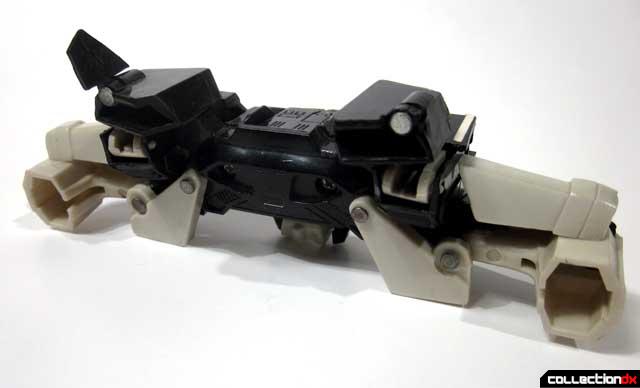 The flyer mode is this neat looking powerful sci-fi jet. 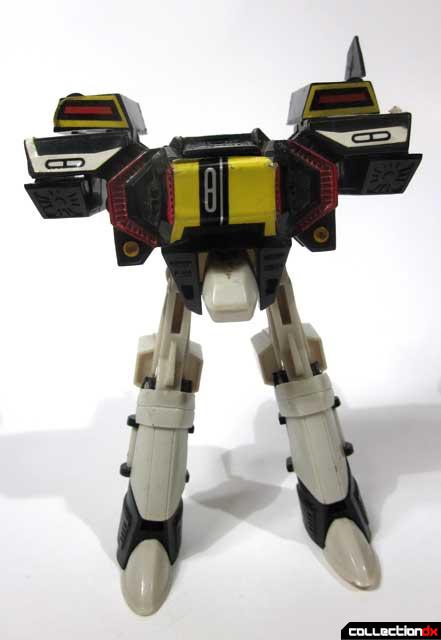 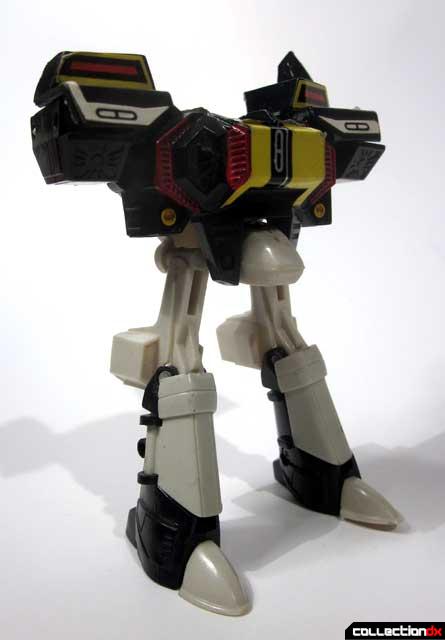 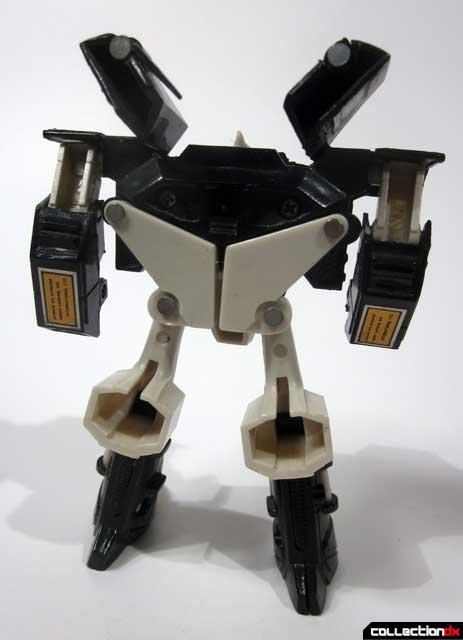 The gerwalk mode looks like a two-legged bird with a beak and keeps with the nature inspired art design of some of the vehicles from Orguss.

The Battle mode is also well rendered and I find it that it was a nice touch to include a laser rifle. Like many of these station toys the articulation was not great but enough to keep the backyard battle going. I also give this Nikick high-marks for its sturdiness as it somehow has managed to survive 25 years of myself keeping it in less in ideal condition. 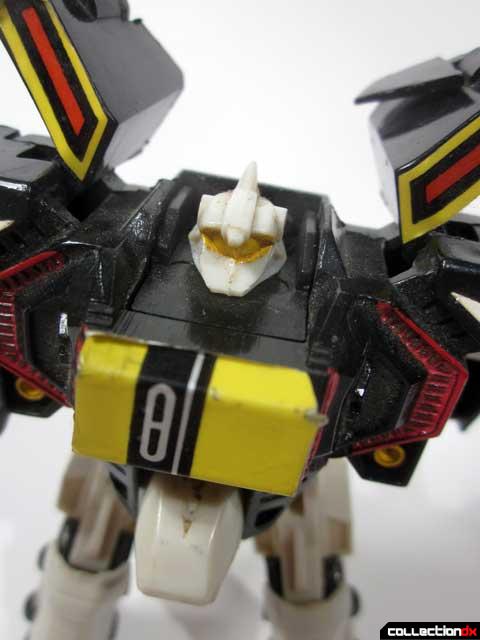 I was a bit upset at myself that I did not have this in my new glass case and I rightfully put Nikick in a proper place on my Macross shelf. Although my swap meet Valkyrie has long disappeared I am still glad I still own my first exposure of the anime series Orguss.

2 comments posted
I had this when I was little.

I had this when I was little. I was equally puzzled yet entranced by it's weird vehicle-mode as I had never seen Orguss (nor would I see it for 25-odd years more after the fact). I wish I knew what happened to mine... *sigh*

Thanks for posting this ! I HAD this one, once....

Just like the other small Orguss toys...they were pretty fragile..and I didn't really know what to make of this one in terms of design.