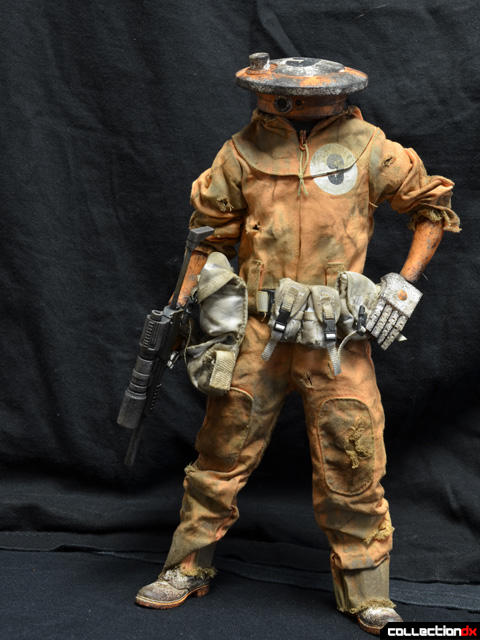 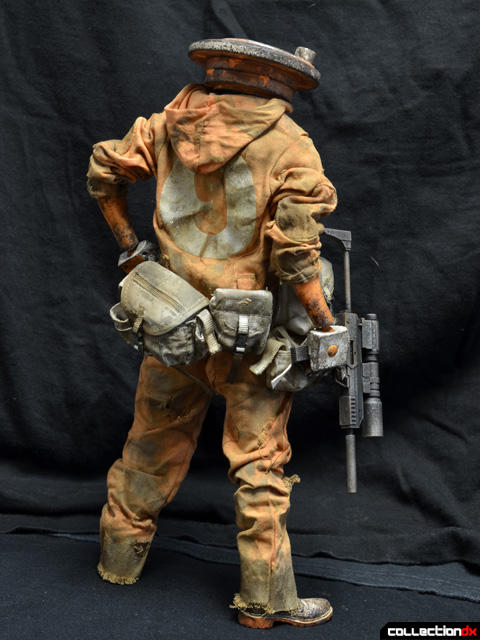 The Nefarious 10 Finger Robot Gang are a band of raucous robots led by King Thumb.  The gang was available on Bambaland as blind-boxed single figures and a massive 'Faux Retailer' boxed set.  They just started arriving on people's doorstep, so they are around if you're looking.  All ten of the gang members share a base figure, with different colors, decals, and weapons differentiating the members.  I wanted to show off one gang member as representative of the whole wave so people had an idea of what was out there.  You can see the complete 10 Finger Gang lineup on the ThreeA Wiki. 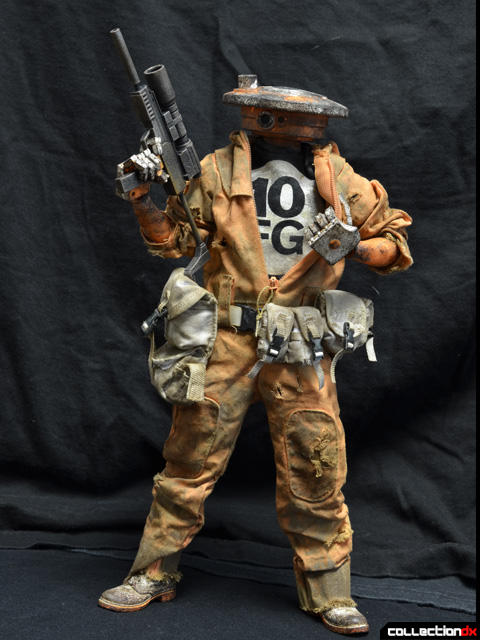 #9 here comes in dashing orange and is armed with a snazzy scoped bullpup SMG.  Even though it's totally bizarre and sci-fi looking, the gun is based on a real weapon, the Heckler & Koch MP7 with surpressor and sight.

The Finger Gang members all feature robot heads similar to other Ashley Wood bots, boiler suits and belts with lots of pouches, and posable robot hands!  The hands are the same as from the WWRp Berties/Bramble/Armstrongs, and feel plenty durable. 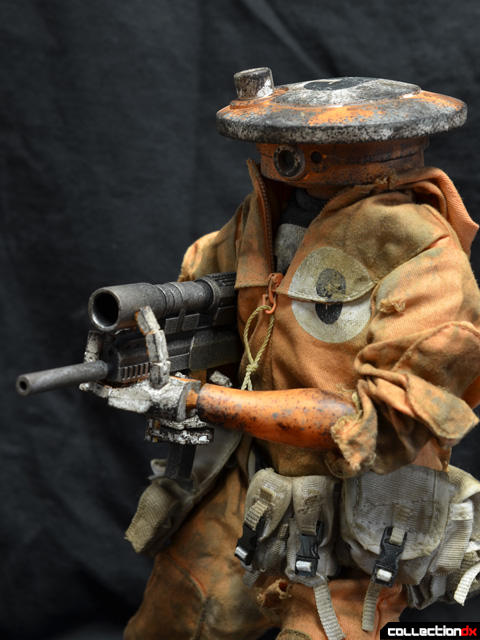 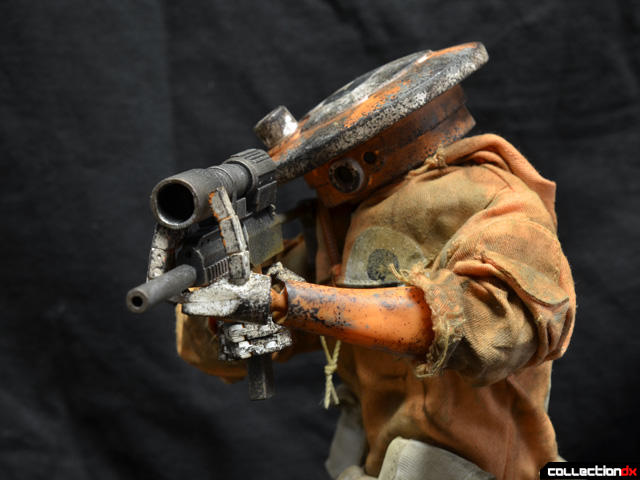 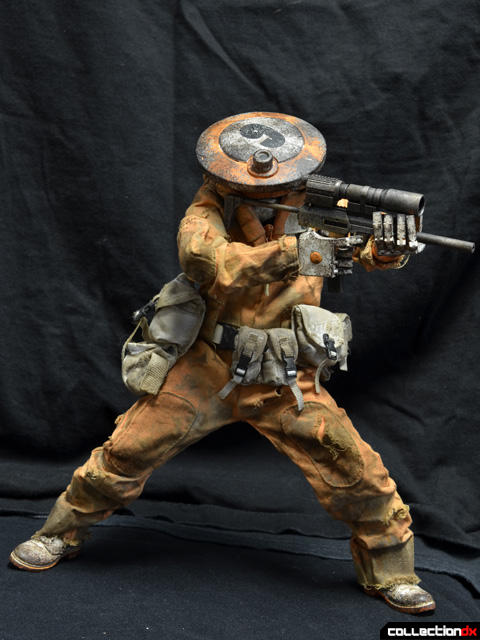 Posable fingers and highly posable 1/6 bodies combine to make a figure that can do faaaaantastic gun aiming poses.  1/6 military guys are always striving to achieve realism, but I think the stylized stuff ends up painting a more convincing picture. 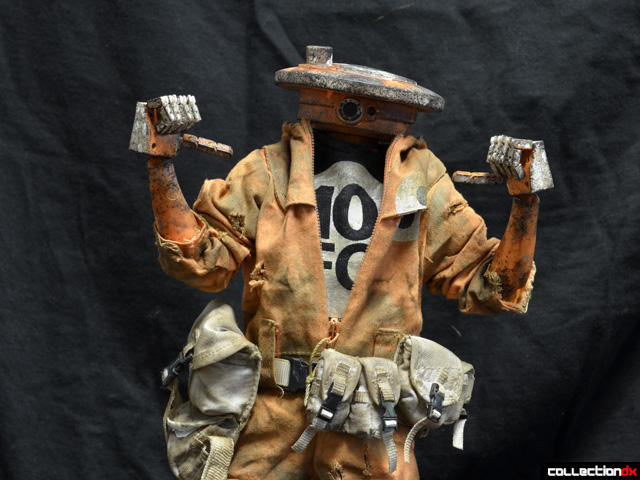 Along with their individual jumpsuits, the Finger Gang all wear their flashy printed gang shirt.  You can't terrorize without swagger. 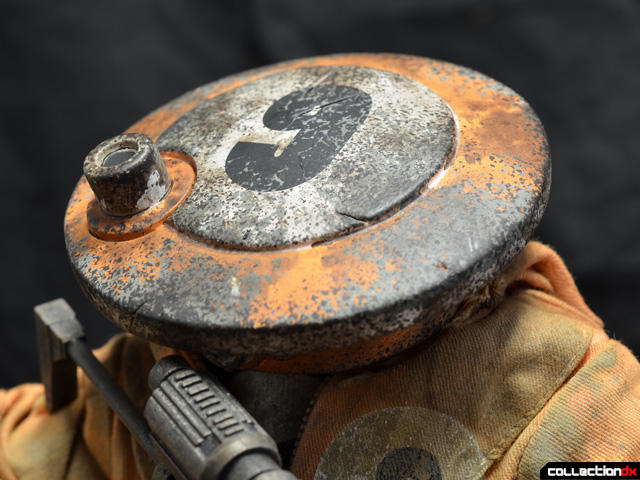 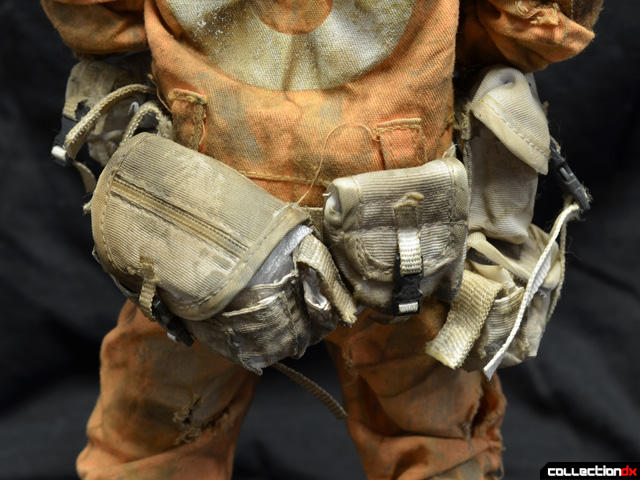 The paint and weathering are great.  3A's craft and expertise really shines through on these guys.  The chipping isn't just slopped on, it tells a story of long and hardened career of criminal activity. 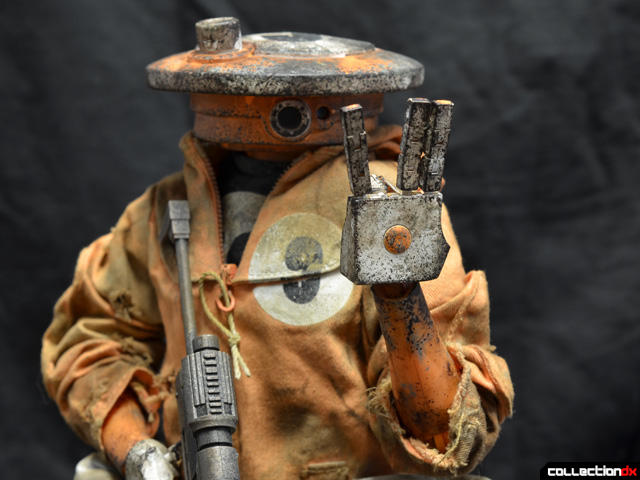 Posable hands also allow for the flashing of gang signs. 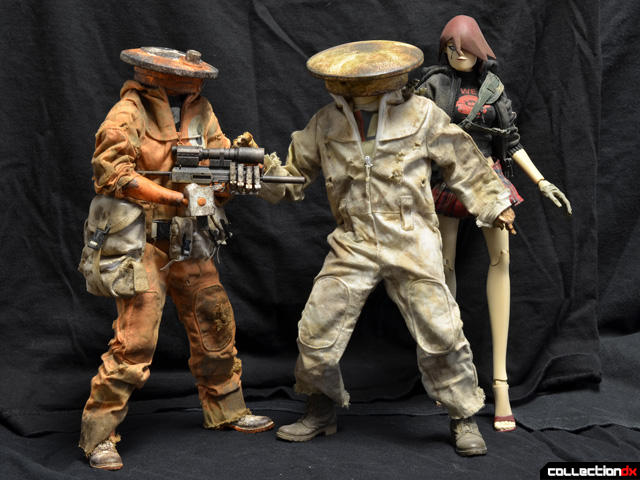 The foldout comic included with the Finger Gang figures sets them off on a mission to capture Cherry Shadow for some illicit end.  Cherry was a limited exclusive a while back as a two-pack with her Zombot bodyguard Sanakhte.  Sanny always struck me as a bruiser, but he's out of his league against a Finger Gangster wielding an SMG. 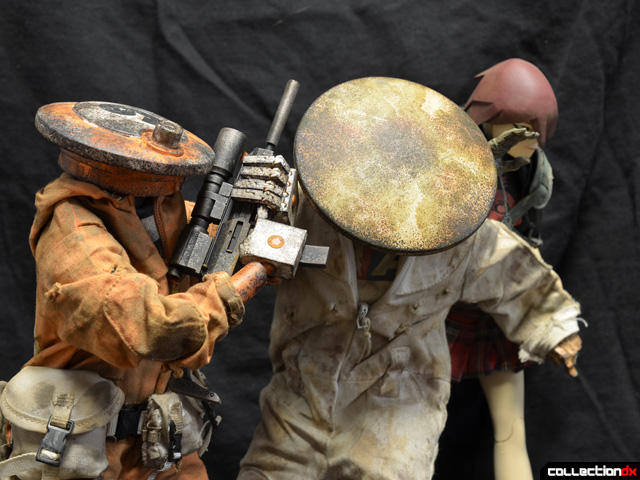 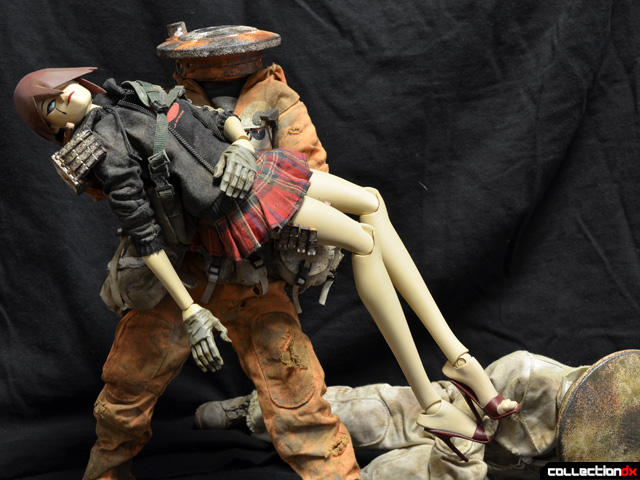 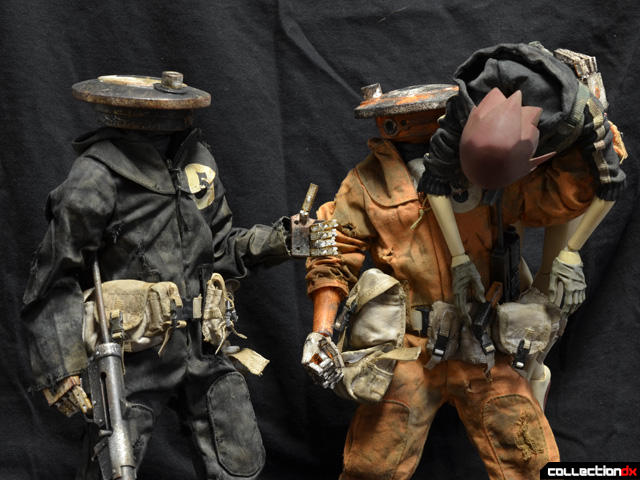 At some point I stopped reviewing #9 and started just playing with my toys.    Deal with it.  The Adventure Kartel stuff is funky and fun, and good 1/6 figures are so photogenic. 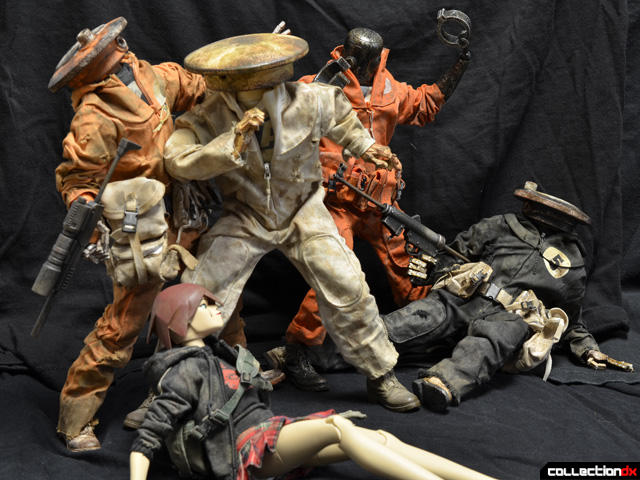 Sanahkte breaks in with the help of a friend to rescue his girl! 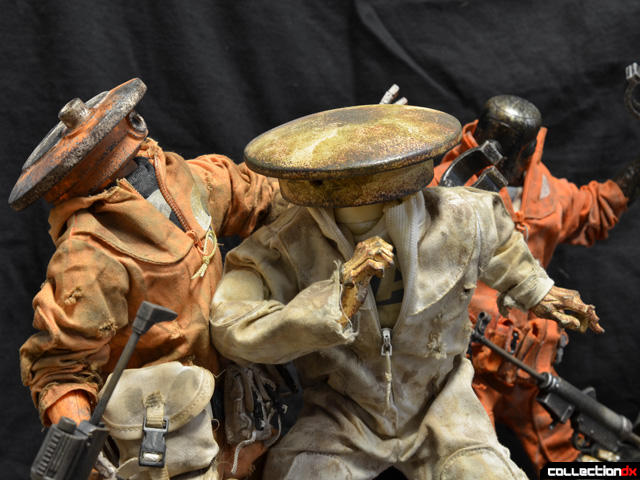 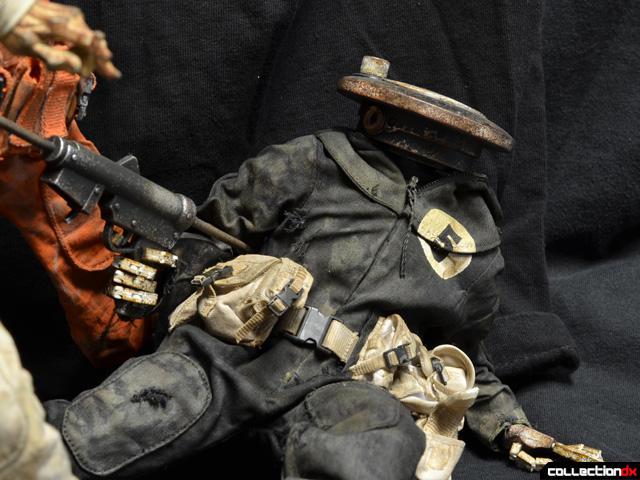 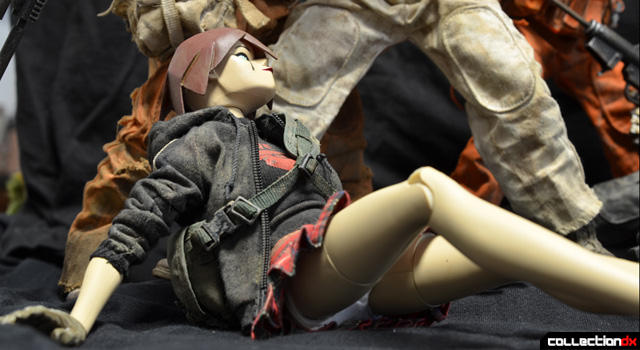 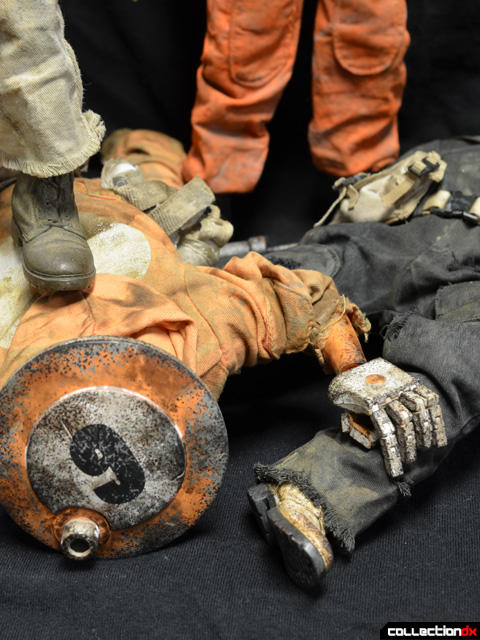 The 10 Finger Gang figures are fun, fabulous robot gangsters. That's pretty much a perfect pitch for a figure to me.  They make great goons for the Kartel to beat on, and are flashy enough to be cool designs all on their own.  In reality, the 10 Finger Gang were a great way to get some more use out of existing toolings by 3A.  Aside from the new bot head sculpt and King Thumb's sledgehammer, every other part and accessory seen on the Gang was seen on a previous figure.  The gun that #9 comes with is originally from the WWR Grunt.  Some people have griped about the recycling of parts by 3A, but I don't really see it as a problem.  Every toy company does repaints and retools, but 3A tries to do something unique with each combination of existing parts, and the Finger Gang are the pinnacle of that.

1 comment posted
i love this review. i got the

i love this review. i got the #10 in yellow. i love it. i hope it comes out in a 1/12 scale and is somewhat avaliable. great pics!