Navvy is #3 in the Generation Toy, Gravity Builder line. He comes packed in a heavy weight cardboard box with sleeve, and custom cut foam interior. Inside the box you will find Navvy, instructions, an extra head, and replacement grip for mixer truckers gun, 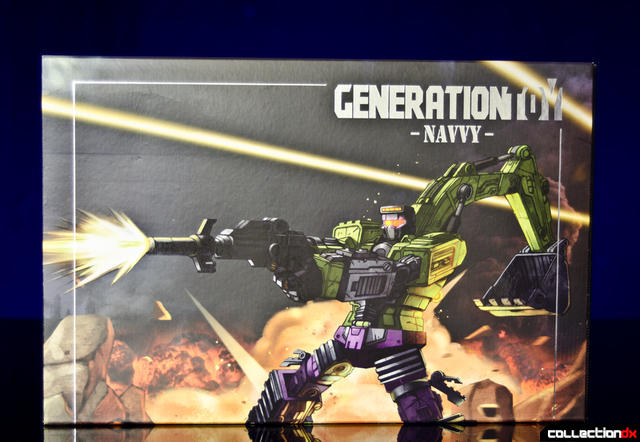 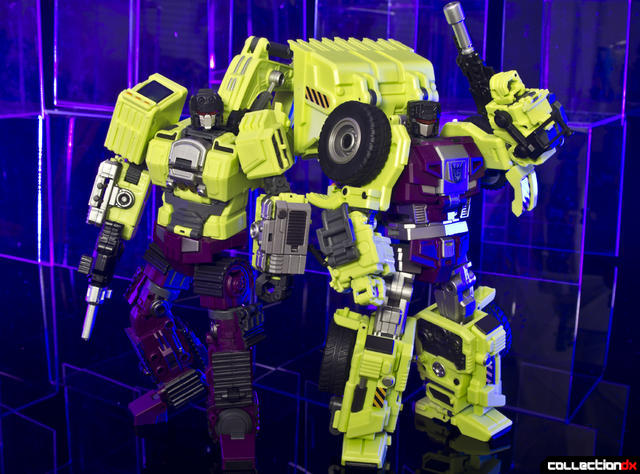 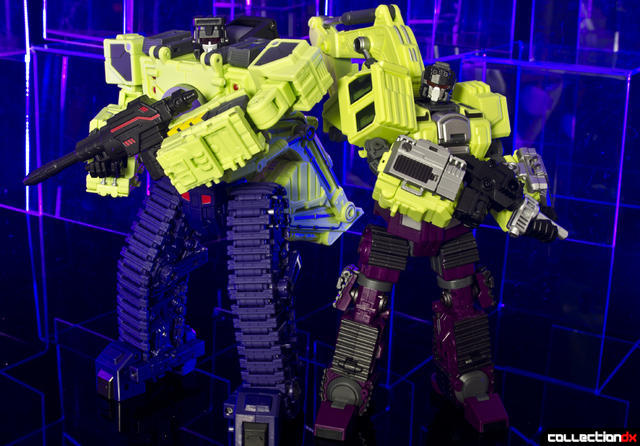 Navvy's paint app's are sharp and on par with previous Generation Toy releases. The paint apps are a little sparse, but bolstered by nice part separation and colored plastic. 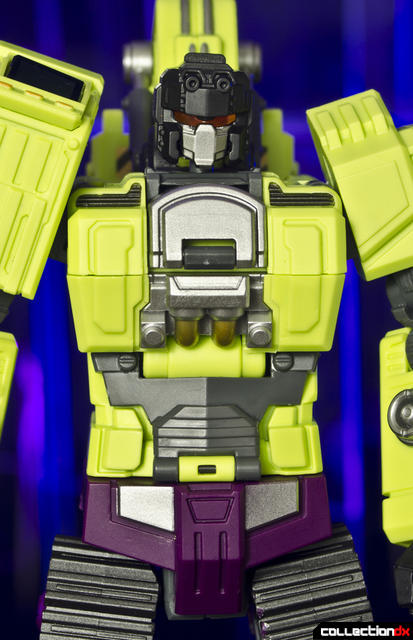 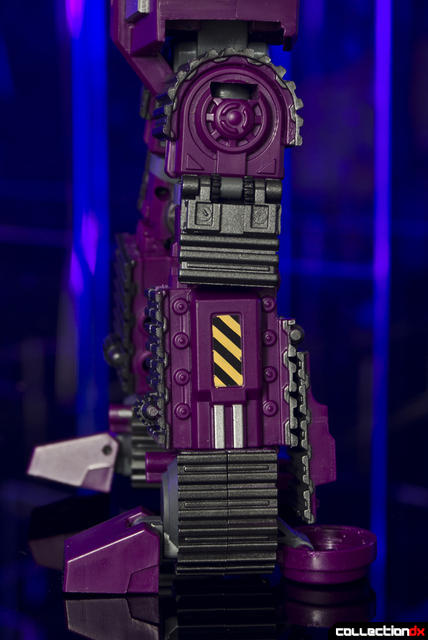 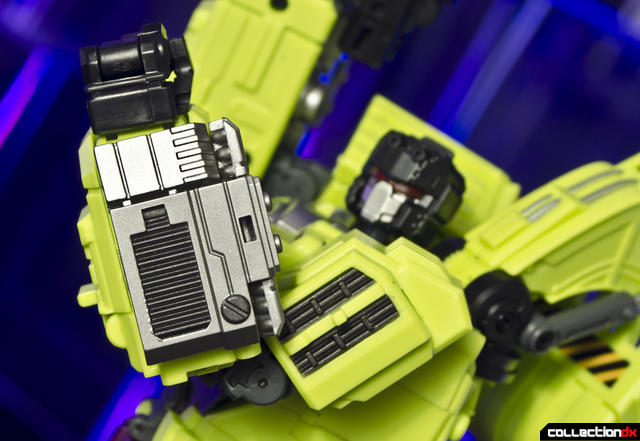 The extra head is an excellent addition, and I really like both head sculpts. 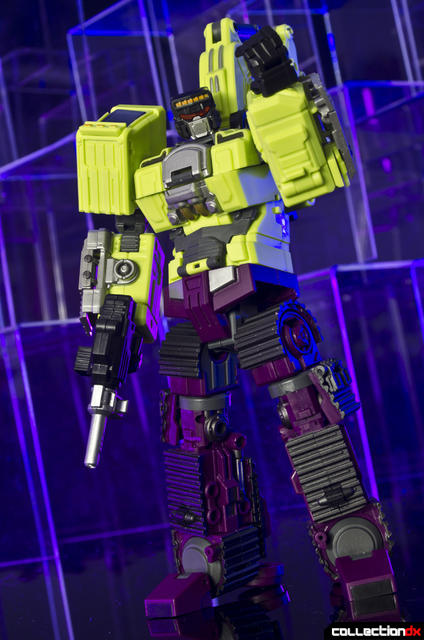 Where Navvy really shines is in the articulation department. His arms and head both have pretty standard range, but his legs, hips and torso are all well above average, and allow him to pull off some very dynamic poses. 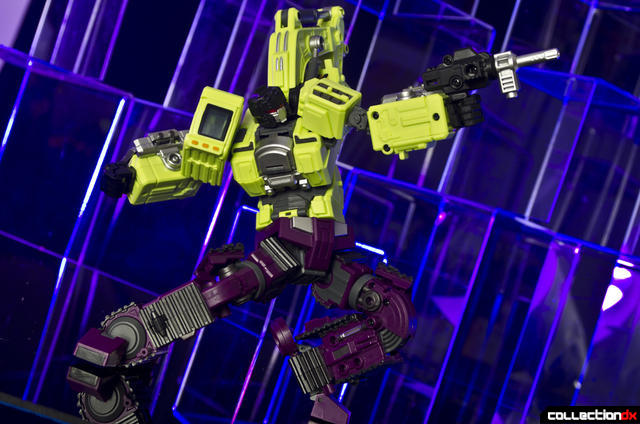 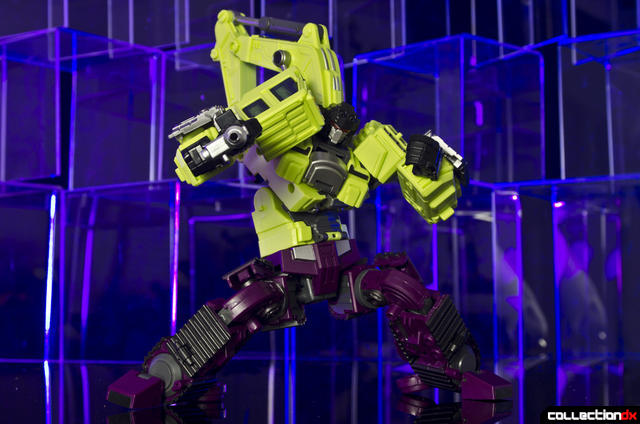 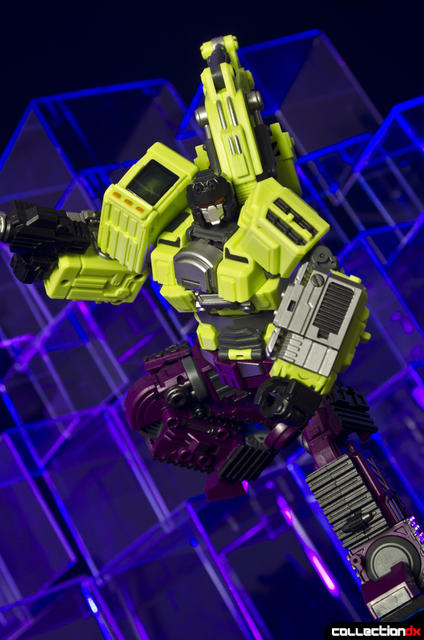 Even Navvy's power shovel has nice range and articulation in robot mode, although the pistons can knock into the head at some angles. 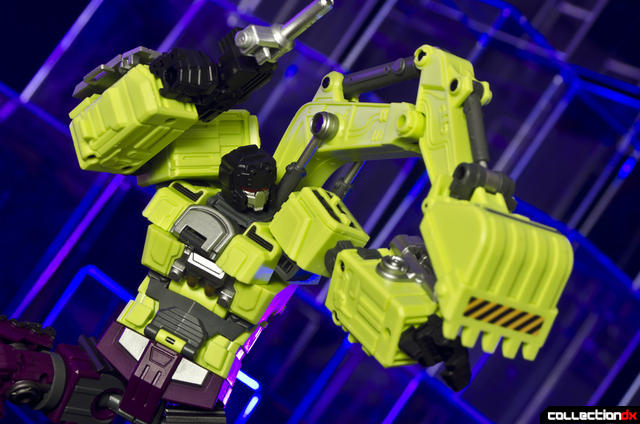 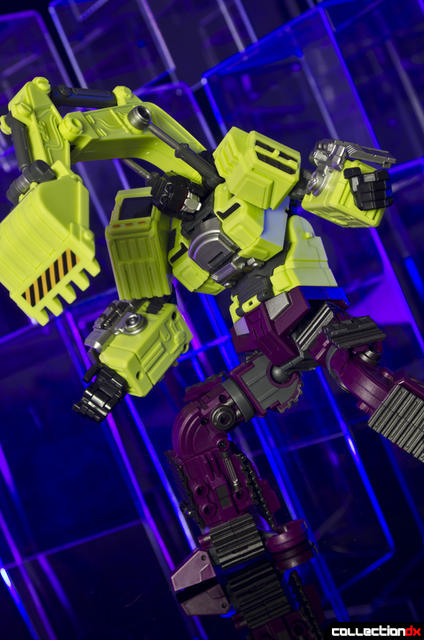 Transformation from robot to power shovel is mostly intuitive. 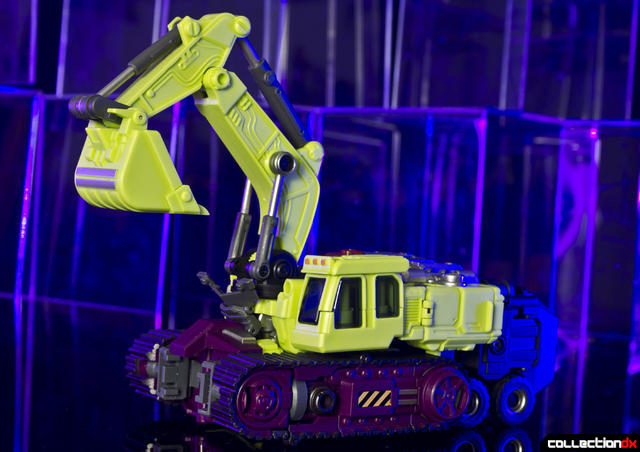 In my opinion, the alt mode is a little weaker than the previous two Generation Toy releases. Both Scrapper and Mixer Truck both had rubber tires and rolling wheels that made them really shine in alt mode. Navvy feels a little lacking in comparison. The front in particular just doesn't come together for me and looks kind of unfinished. Keep in mind, this is just my personal opinion, and your mileage may vary. 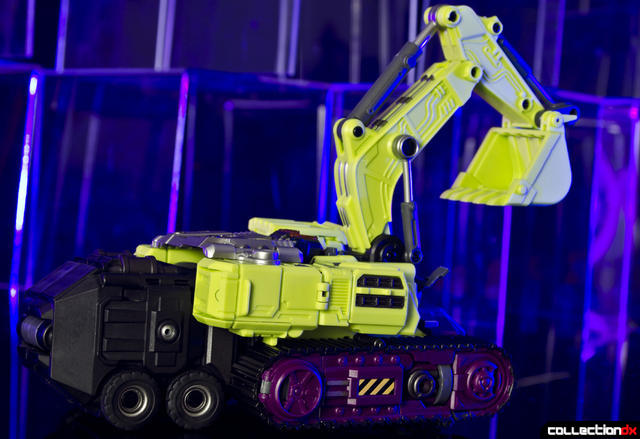 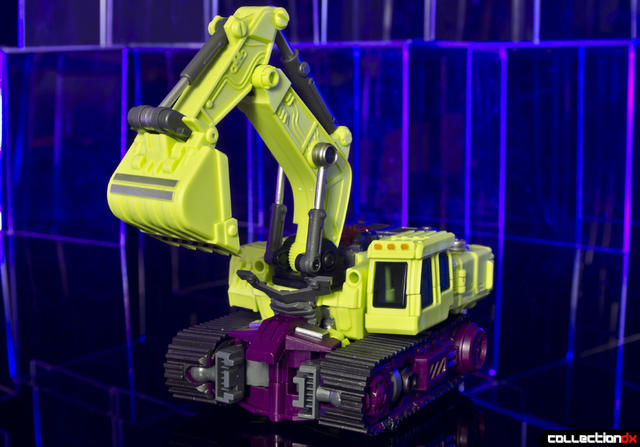 Navvy's cab is fixed, but the shovel can swivel and has several working pistons. 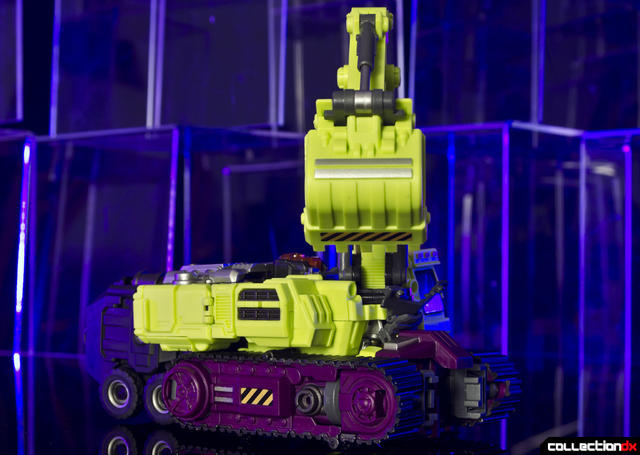 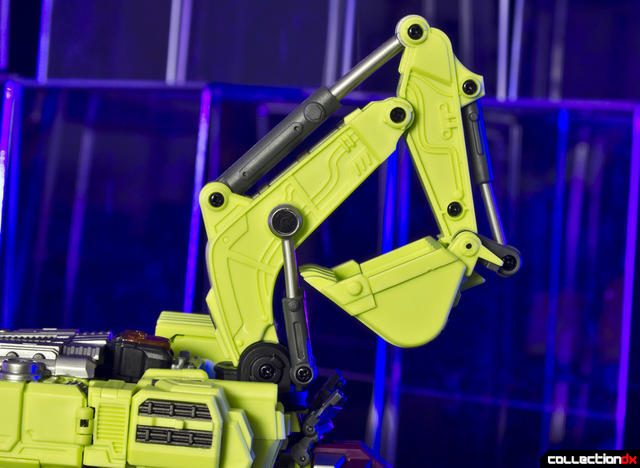 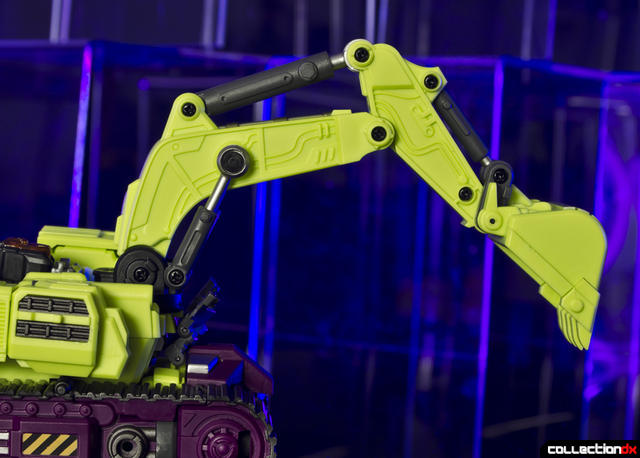 The combiner parts, (forearm and fist) fold up into a portable generator that can be unfolded and worn as a back pack in robot mode or folded up and hooked on as a towed generator / trailer in alt mode. 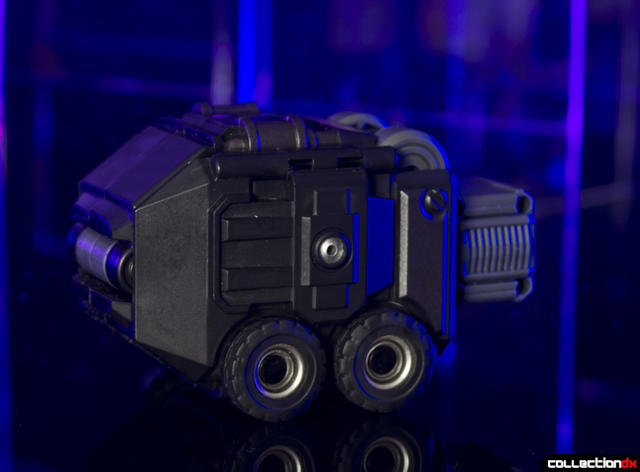 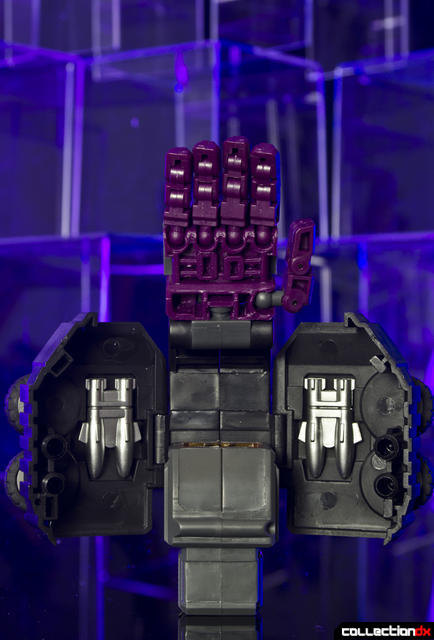 Generation Toy made sure to incorporate the combiner parts in all modes, and while I can appreciate the effort, this leads to some issues. To me, the back pack just kind of looks like a lot of kibble, but looks are subjective. What isn't subjective is the fact that the back pack makes him very back heavy. 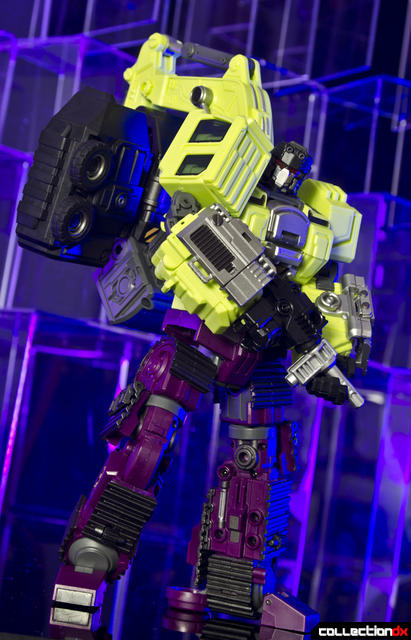 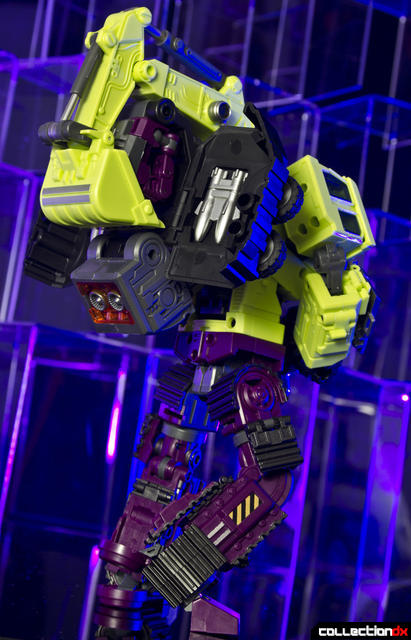 In alt mode, the combiner parts connect to the back of the power shovel as a generator or trailer, and looks a lot more cohesive than robot mode. The problem comes if you want to unhook the trailer, it leaves a large open gap in the back. 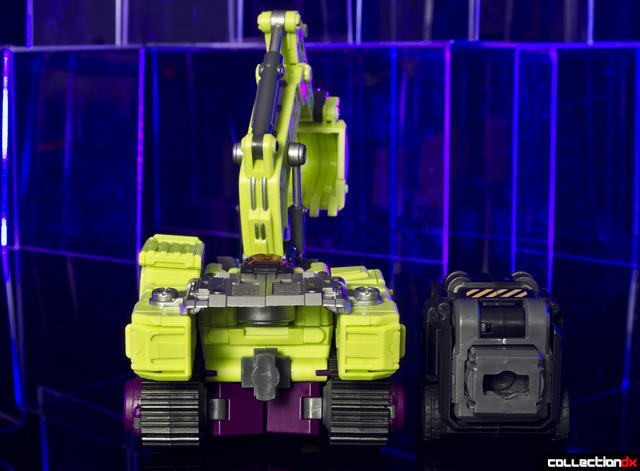 Neither one of these issues is a huge deal. I just leave the back pack off in robot mode, and on in alt mode. The generator has nice paint apps and rubber wheels and makes a decent stand a lone accessory in both modes. The combiner mode itself is solid and easy enough to get to. Articulation is about average, the only thing that I would have liked to see is a little more range in the wrist (they swivel but don't tilt). 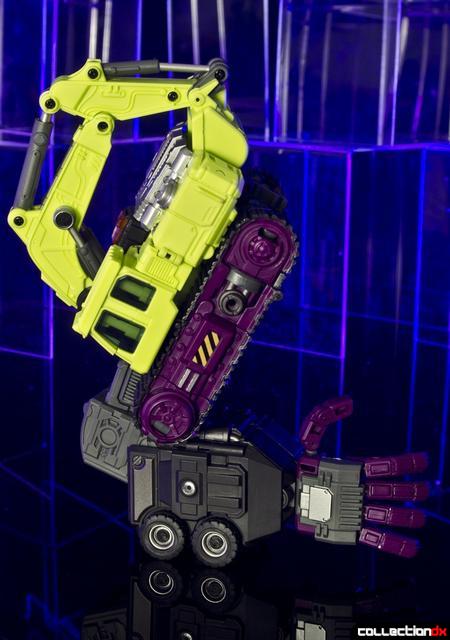 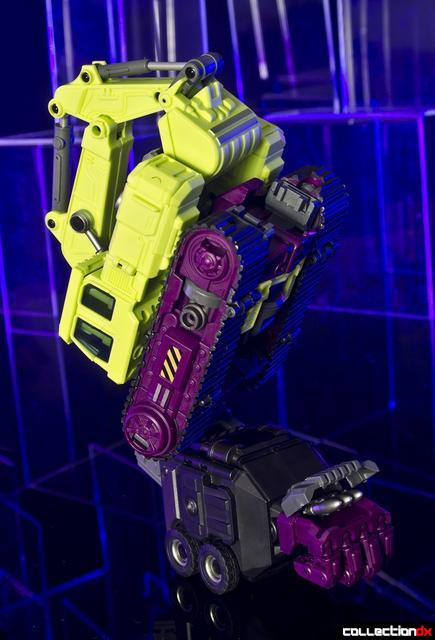 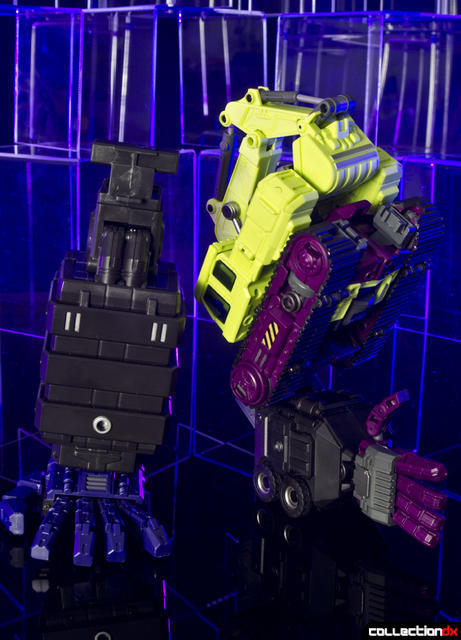 Altogether, Navvy is an excellent release. He has some of the best articulation I have ever seen in a 3rd party release and it's a blast pushing his range of motion to the limits. I'm really happy to see that Generation Toy is pushing itself with each new release, and can't wait to see the rest of the series. 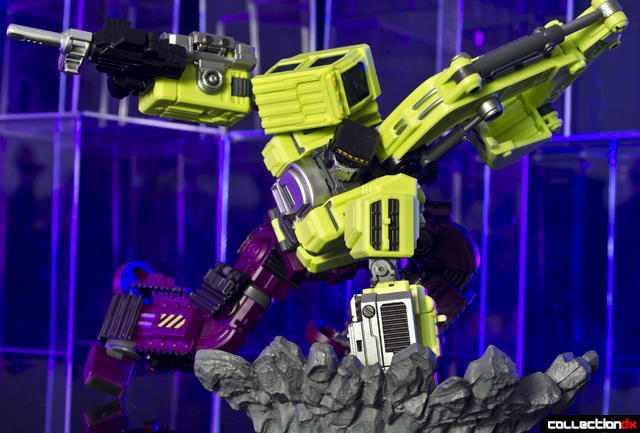