The version of Ms. Marvel here is the current one as seen below in her last ongoing series and in the Avengers. 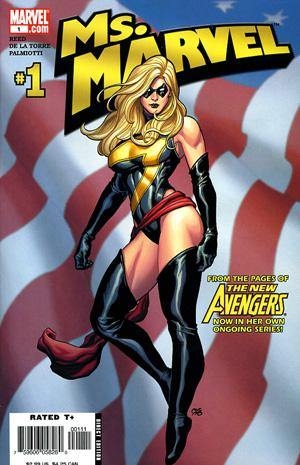 This outfit was first introduced during the 1980s while she was with the Avengers and this look remains a fan-favorite.

Review.
As with all the Koto Bishoujo statues, the figure comes in a four-color, window box. 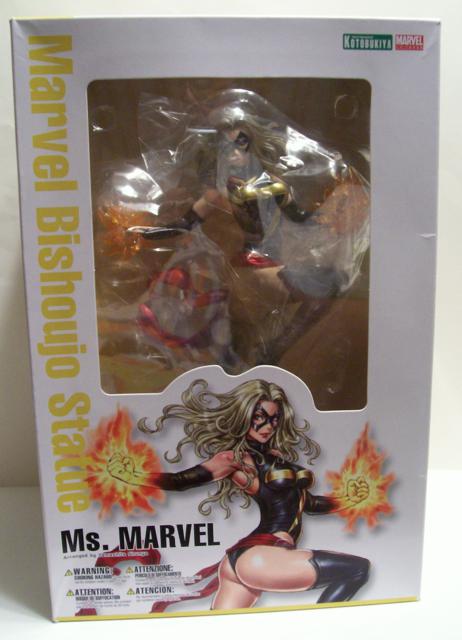 Here is the illustration of the Bishoujo vision of Ms. Marvel from the box side. 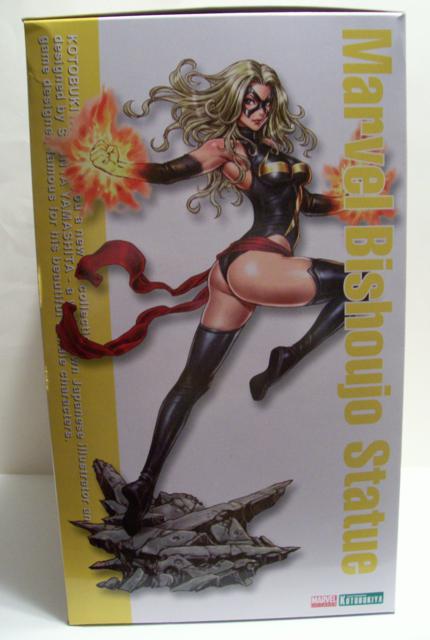 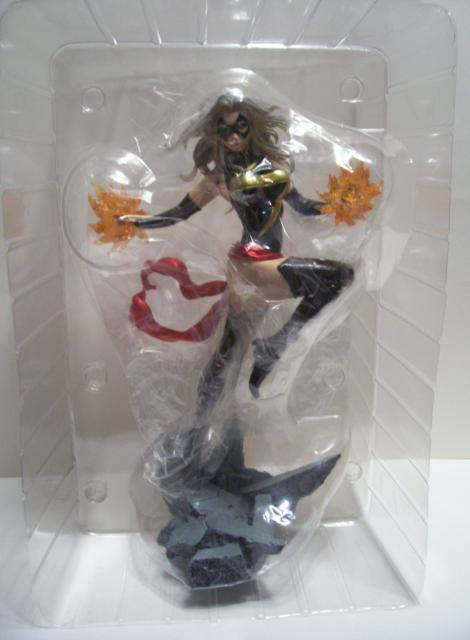 Like the character in the comics, Bishoujo Ms. Marvel is very straightforward. The colors, pose and sculpt make for a very striking presentation. No posability and no cast-off parts. No other accessories. What you see is what you get. 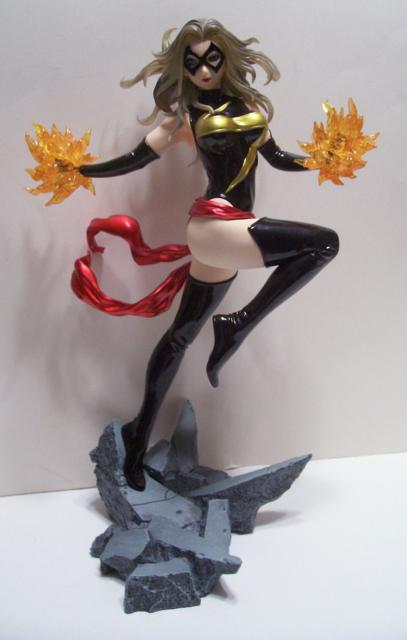 Ms. Marvel’s supposed to be a bit mature compared to the more girlish looks o the other statues-but still, her face seems to lack expression.. It seems a bit odd to me. Can’t quite put my finger on it. 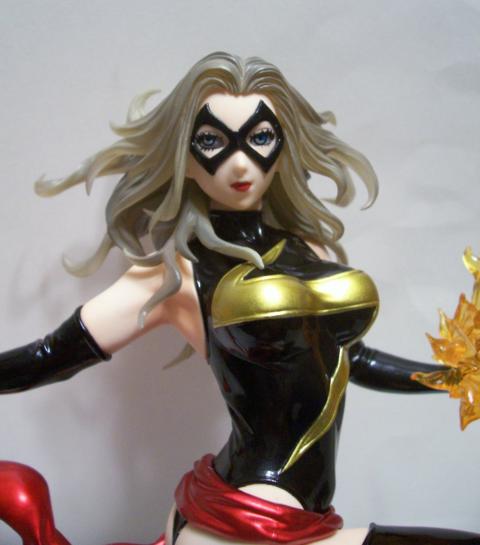 They manage a sculpt-showing off her well-developed breast in spite of the costume’s cleavage free design. 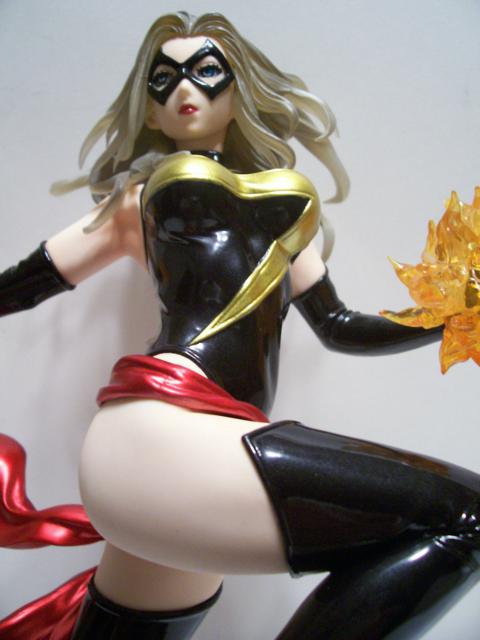 Hands are covered by fiery halos that represent her energy blast/absorption powers. 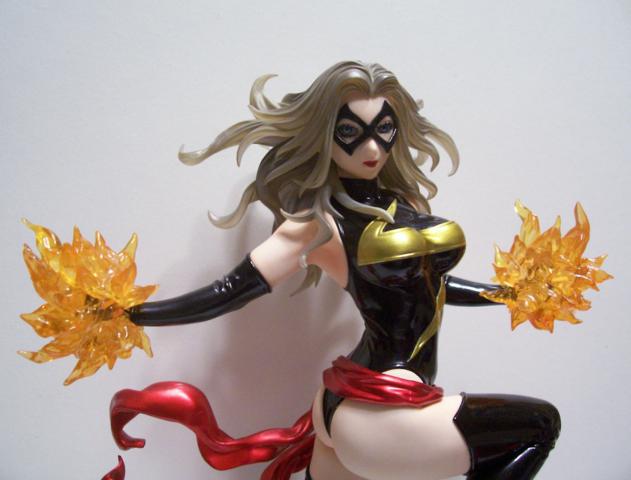 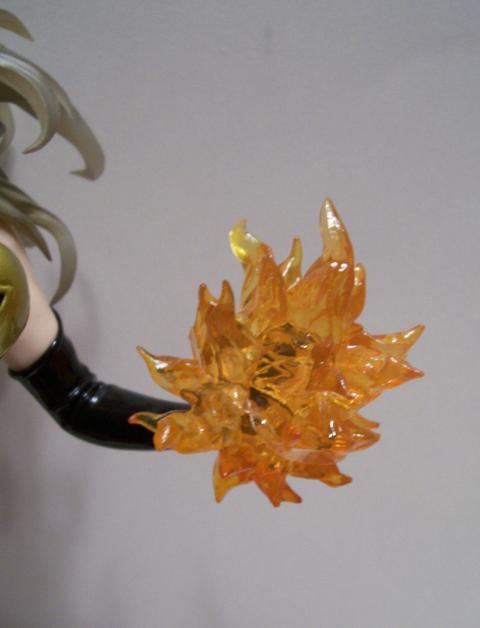 Hair is always part of the character’s look-and Ms. Marvel is no exception. The hair sculpt reinforces the whole energy plus flight theme by itself appearing electrified and kind of wind blown.. 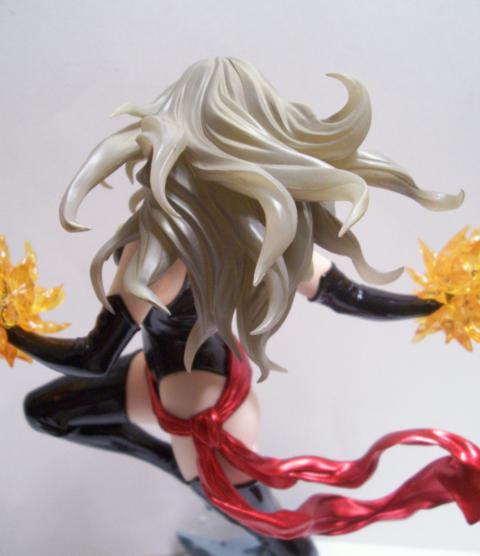 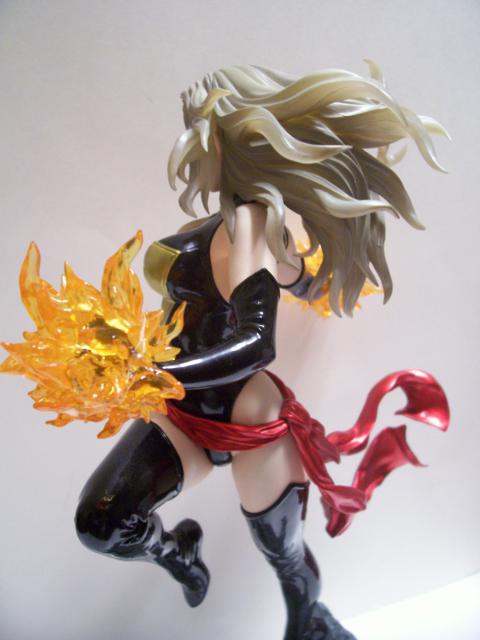 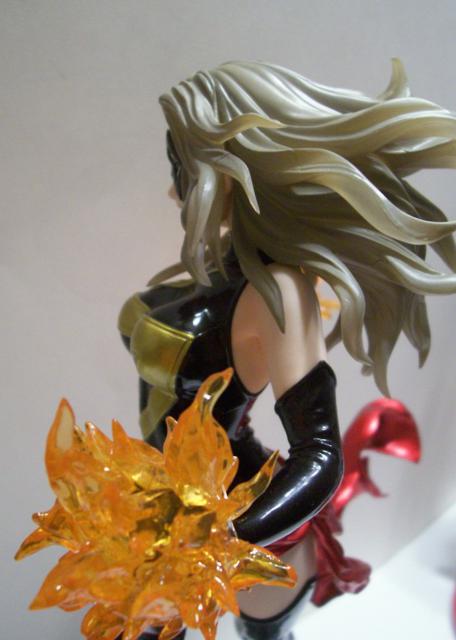 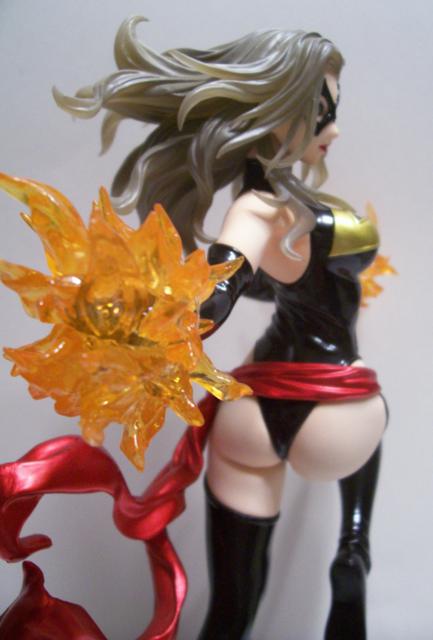 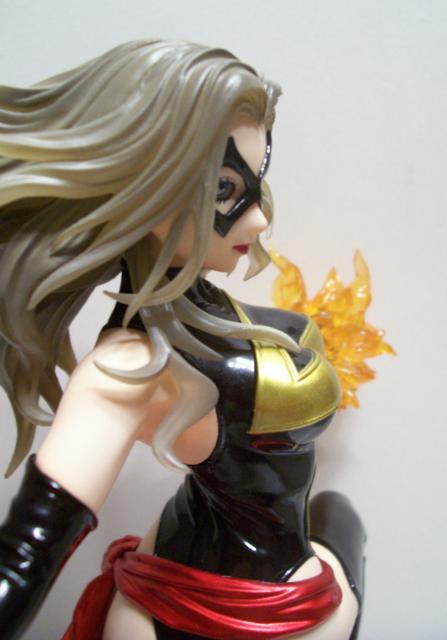 The full thighs on the statue are well done and are consistent with the fact that she's actually a woman and not the teenager that some of the other Bishoujo statues seem to be modelled after.. 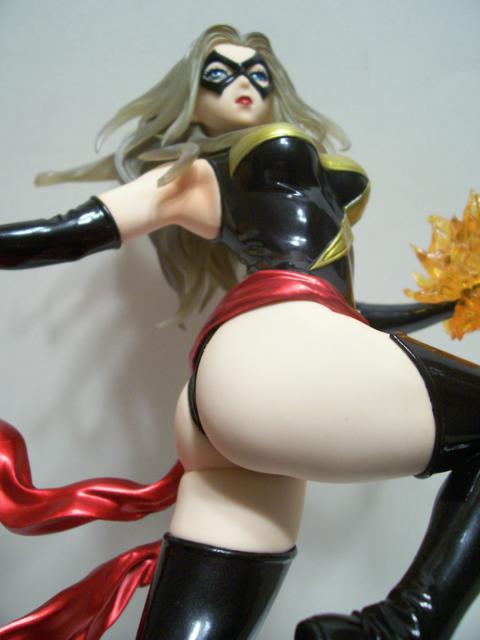 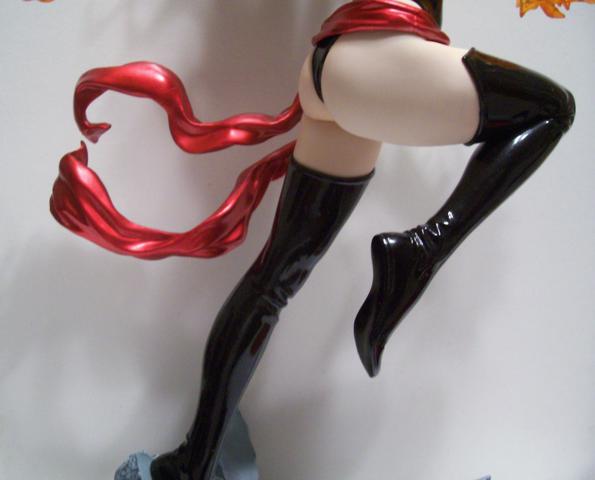 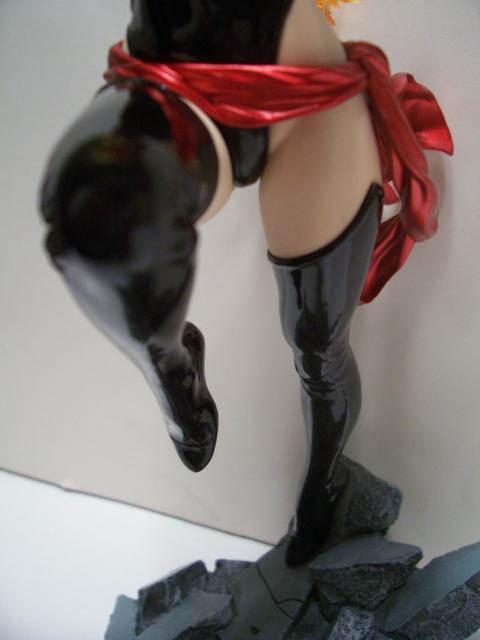 The bright red sash is striking and the red highlights really compliment her black outfit. More so here than in the comics, I think. 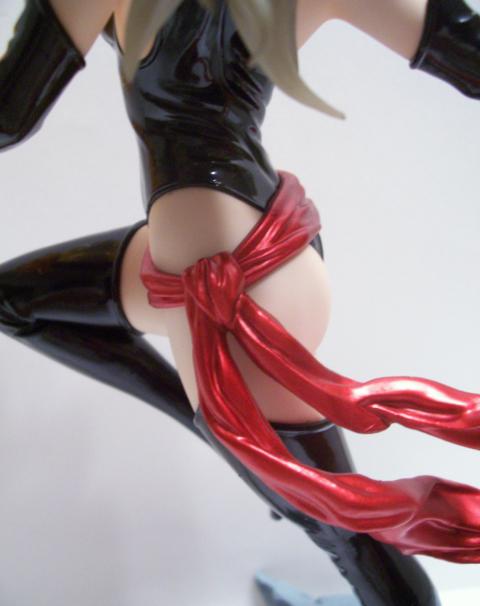 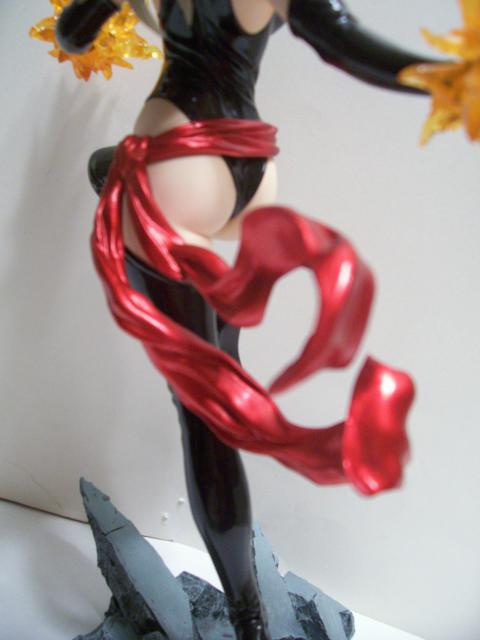 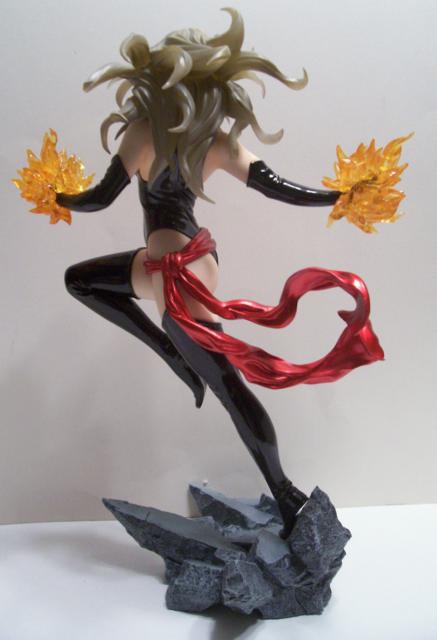 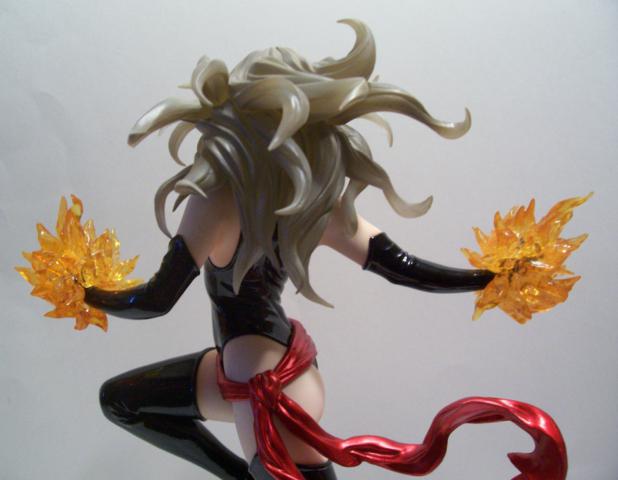 Ms. Marvel has always had this look-but I don’t know that I’ve really noticed how much of her costume is basically a thong! The ass is very pleasingly round. Very nice. 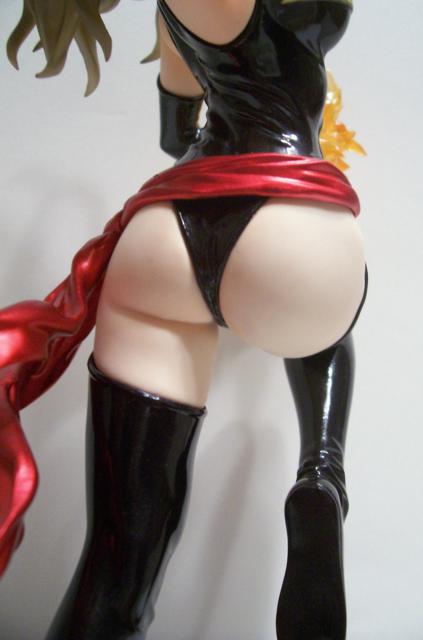 Ms. Marvel’s pose is dynamic -but attention should be drawn to the figure’s foot attachment to the base. Its not entirely clear what’s fastening the statue to the base itself. Is it a metal screw? Or is it just glued down? Either way-long term stress on the leg will probably not be good for the statue in the long term. Is the long-term cost of the great pose, an inevitable instability? 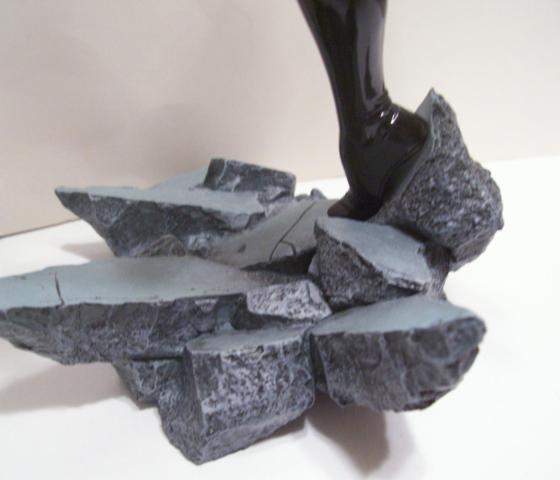 Overview. Personally, I REALLY like this statue. I love Ms. Marvel- and this statue’s colors and sculpt have me sold. The red sash, the gold on black and the pose all make for great presentation and eye-pleasing shelf presence. That said, the face is imperfect (not a deal breaker though). But honestly, I’m a little worried about the long-term consequences of the statue’s single foot support attatched to the base. It seems to be pretty sturdy now, but not sure what happens after you’ve consistently got weight on it.