Anytime I have done a review of a KO (knockoff), the comments seem to get divided into four groups.
- KO haters (hate that they exist, real company losing money, fear unsuspecting buyers getting ripped off etc.)
- KO buyers (don't wanna spend the big bucks, don't care that original company invested in engineering, research etc.)
- KO collectors (collect them because they are interesting and mysterious and usually also buy originals etc)
- Neutral (doesn't matter either way, they see positives on both ends, they buy what they feel like etc.)

I seem to fall into the KO collector side because not only do I collect the originals, but I also buy the KO. I am fascinated at their existence. I am intrigued at their history and their development. They have a mystery about them that originals don't seem to have. I really could do pages and pages on the subject and I'm sure a battle can ensue between factions in the comments section, but we are here to check out something that I really like that once in a while happens in the world of KO's. What I'm talking about is a unique creation based off of an existing figure. Sure MP-12 KO's have existed and soon after their mold brothers have surfaced, but the KO people took it one step further and created their own little monster not found in the Takara lineup. I consider these gems, or in this case gold.

Here is the MP-12 Jin (Chinese for gold) Lambor (Sideswipe). Lambor comes in the same type of chromed box as the MP-12T Tigertrack. This version is done in a gold foil instead of silver. The name Tigertrack has been replaced with Lambor. And as if to say "This is strictly our creation", they have left off the Takara Tomy logo. 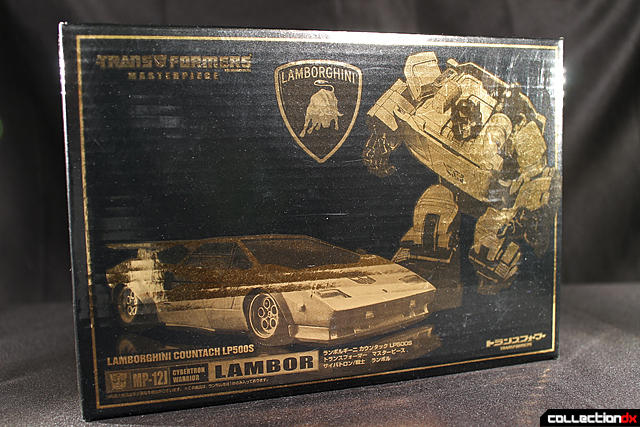 The back features the same MP-12T look except the bio is replaced with Lambor's. The box is nice and thick like the Takara Tomy releases. 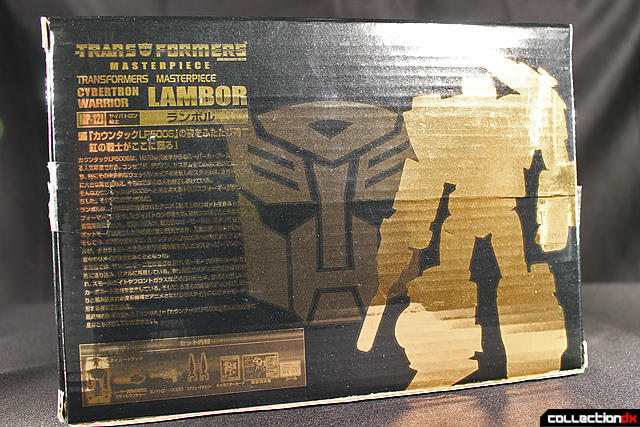 Inside you will find the same type of tray with all the same markings as you would find in the original normal version. You get Lambor, shoulder cannon, blaster, short piledrivers, instructions, gold foil spec card, autobot decal sheet. 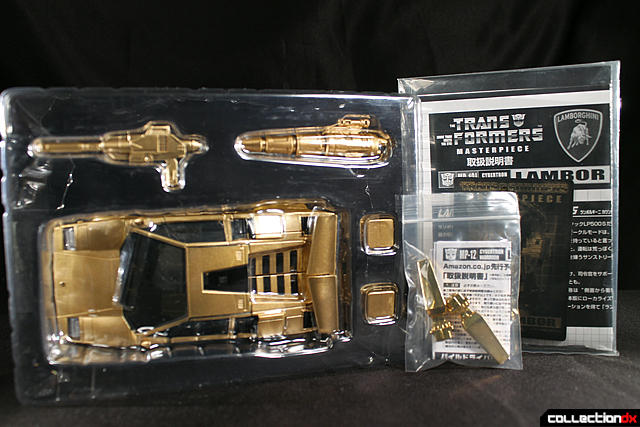 Here is a closeup of the spec card and sticker sheet. You will notice that the sticker sheet says Tigertrack. 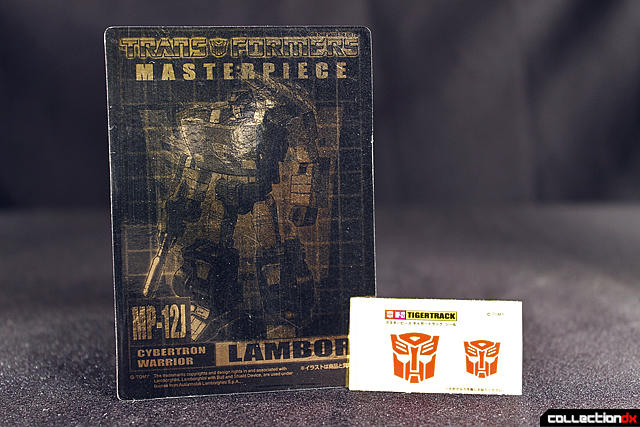 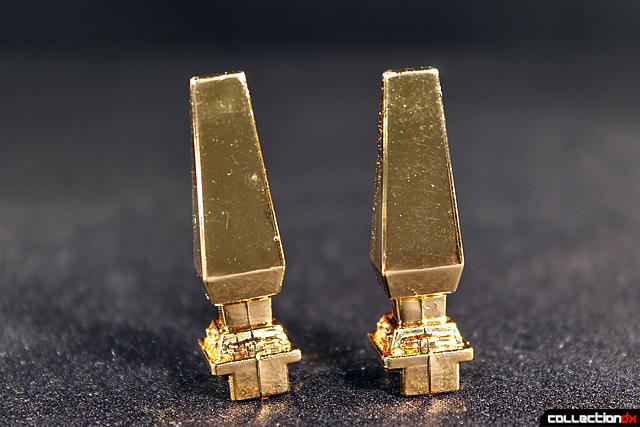 Here is Lambor's vehicle mode. Notice that the panels are actually quite straight. Even better than my Takara Tomy first production run MP-12 Lambor. The color is well done. The metal flakes are nicely distributed. I did notice some color variations in the paint due to photography but with my own eyes, it looks fine. 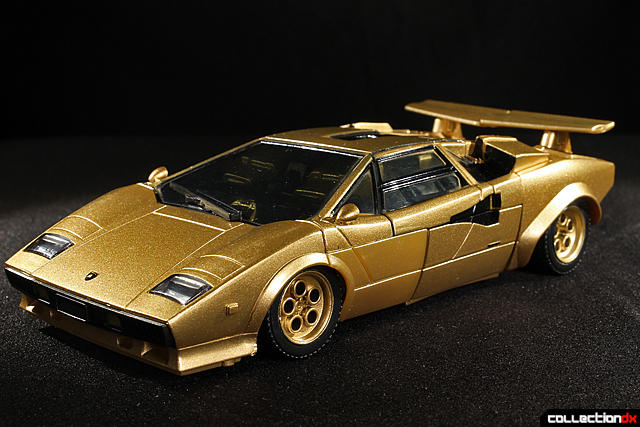 Looks good from the back too. What Lamborghini doesn't? 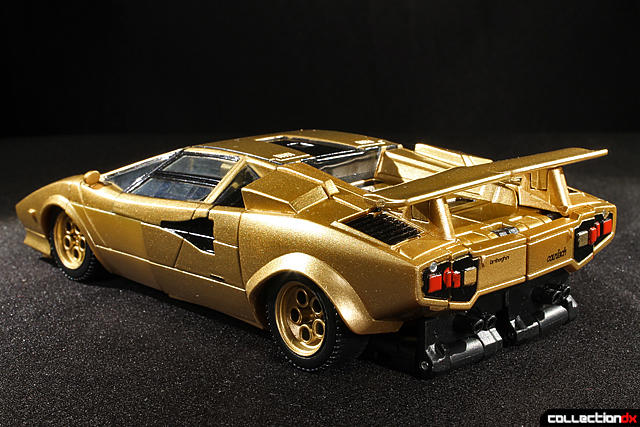 Underneath, everything is tidy as expected. This is where you can see the other colors of this figure. Red. People seem to either love it or hate it. 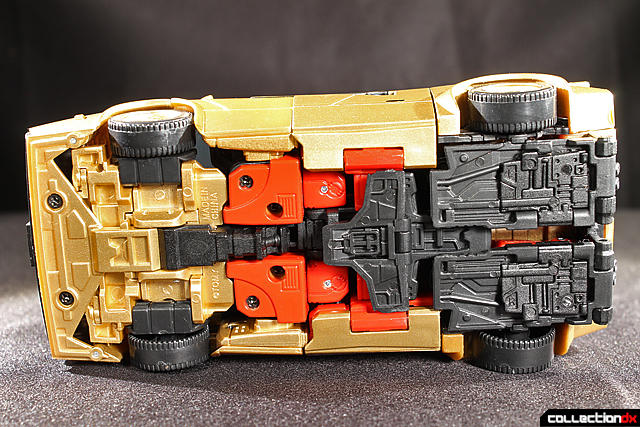 The cannon and blaster combine to create the vehicles weapon. 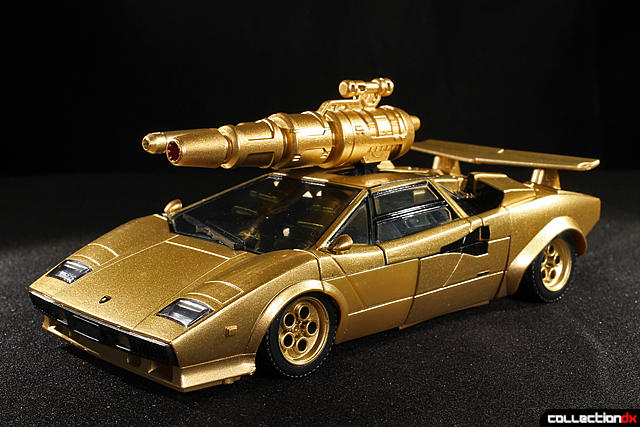 Transformation is identical to the original. What you are left with is, at least to me, a stunning rendition of Lambor. I have to admit that at first the reds were fighting my eyes when seen against the gold, but luckily it has grown on me and I think it works. For many others, using black, white,silver or all gold might have been better, but I'm kinda diggin' it. This figure did to me what the G2 Lambor did. It fought my eyes and then it grew on me. 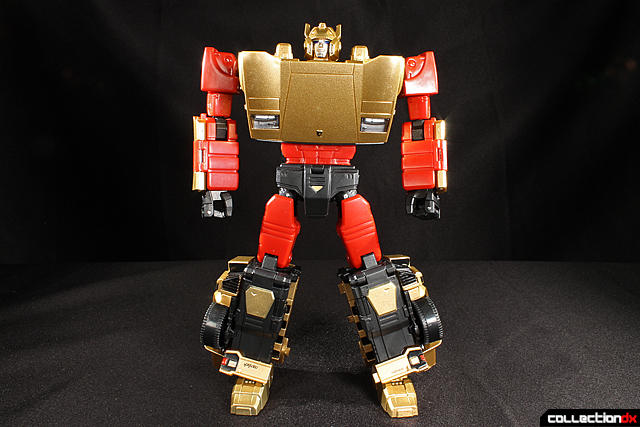 It's not Lambor, or Sideswipe as I prefer to call him, without his shoulder mounted cannon and a blaster thrown in for good measure. I've posed him here to show off a bit of articulation. My figure doesn't suffer from any loose joints so that's a plus. 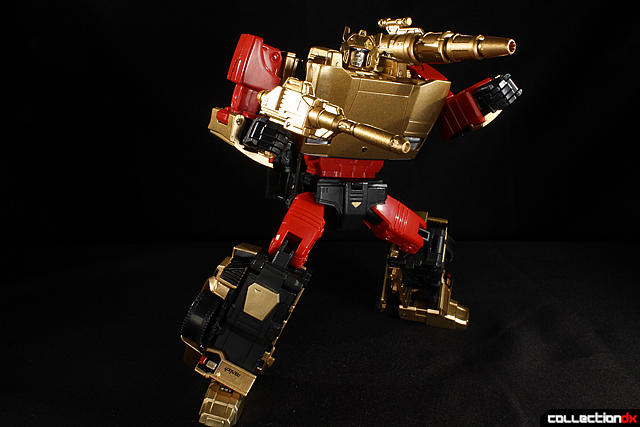 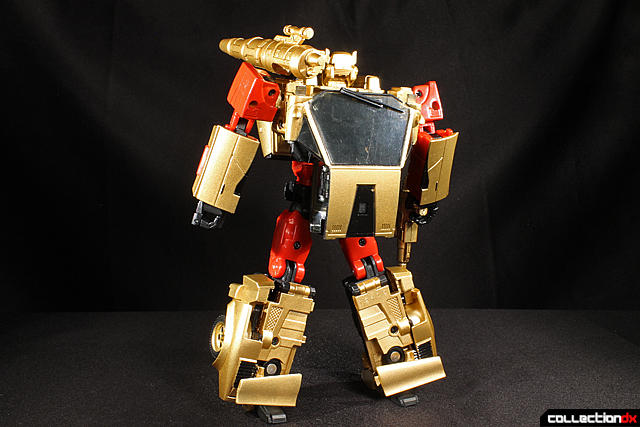 It may already be glaringly obvious to most, but I have decided to leave off the Autobot logo. It just didn't seem right to me to put one on. I wouldn't want to consider him a different color Sideswipe. I would almost like to see him as another character with a different headsculpt if I was to add the faction logo. 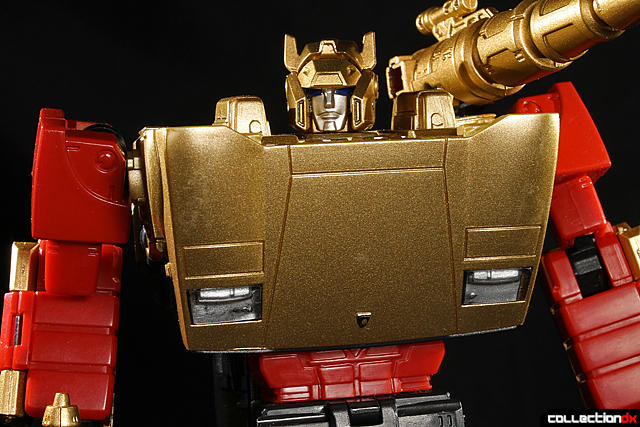 Here he is with the normal short piledrivers. 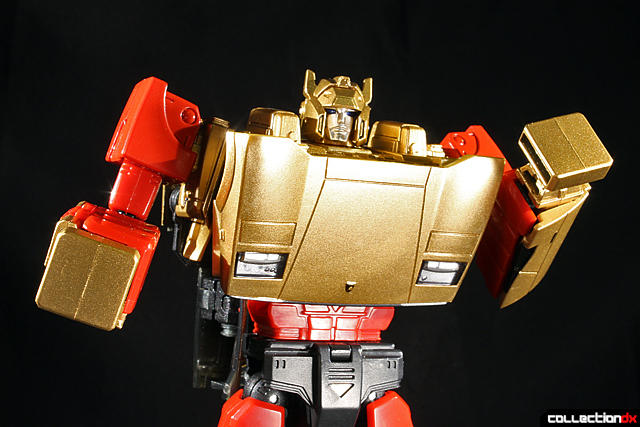 Here he is with the longer "Amazon Exclusive" piledrivers. 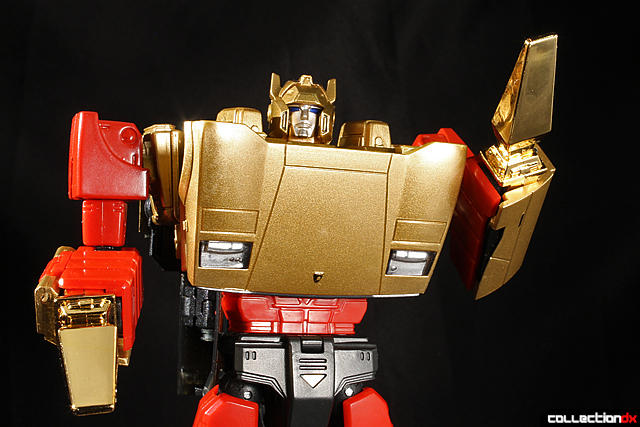 Of course being all pimpy and blingy, he tends to attract a lot of friends. Here he is with two MP-12's. One legit and one KO. Can you guess which is which? 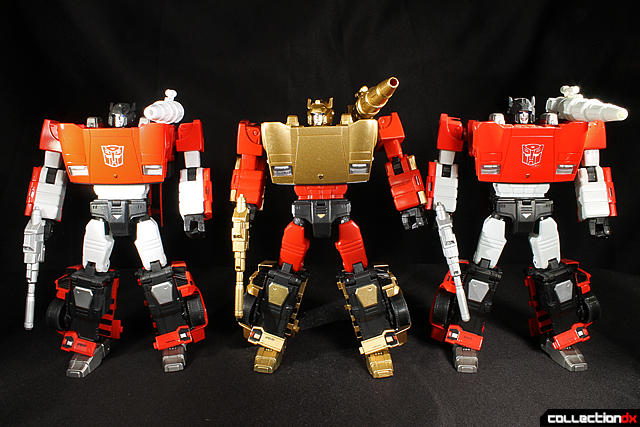 MP-12J with two MP-14 Red Alerts. One legit and one KO. Can you guess which is which? 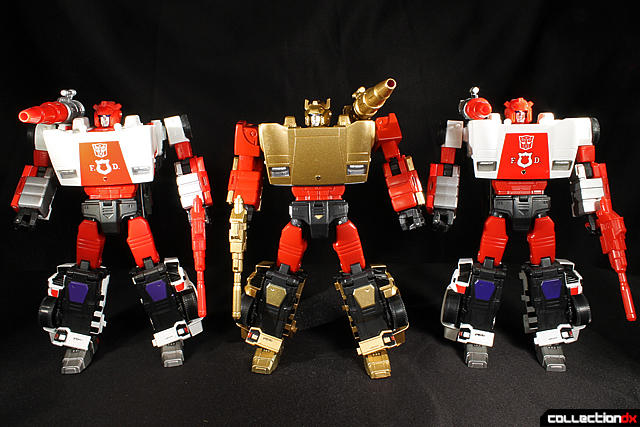 MP-12J with two MP-12T Tigertracks. One legit and one KO. Can you guess which is which? 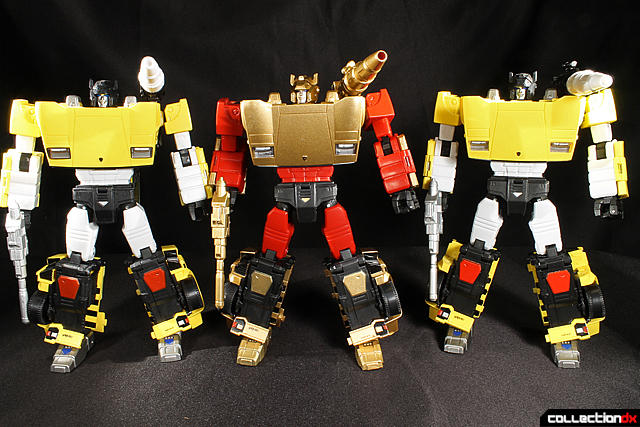 Of course being all pimpy and blingy, he needs to hang out with other blingy friends. 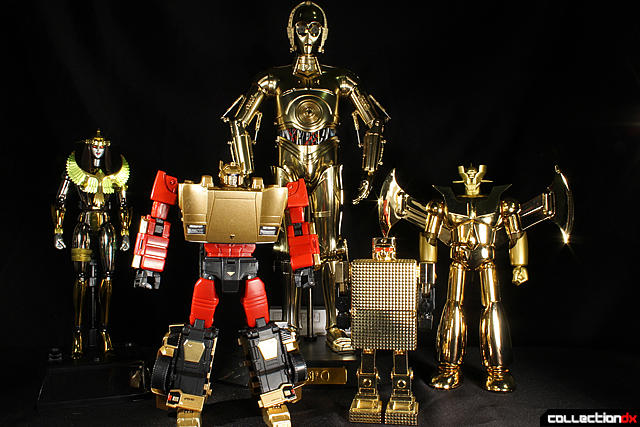 The only issue I've had with this one is that the round pin popped off on the shoulder. It has not happened on any of my other Lambor mold KOs. Seems to be an easy fix luckily. But for now it holds as I have shot the whole review without it. I have not heard this issue from anyone so it's probably an isolated incident.

Bottom line on my end. I love this thing. Sure it could have been completely plated but as a KO, I wouldn't expect perfect plating. As it is, its done well. Smoother transformation than my other KO's and more consistent panel placement. The plastics are just as good as the Takara Tomy versions. And in case anyone was wondering, this does not come off the same molds as Takara Tomy versions. There are minute variations in the mold and CNC markings. However, parts could probably fit over form Takara Tomy pieces. This is what makes these things mysterious. How are they created? Where are they created? How are the measurements so precise? How? How? How? Everyone is entitled their opinion on how it works but unless someone just comes out and shows us, it will always be a mystery.

I'd like to thank my TF enthusiast friend S.L. for helping me get my KO stuff.

Check out VF5SS's review on the original Takara Tomy MP-12 Lambor (Sideswipe) that this KO is based on.

Poor Lambor, he looks like he the mascot of a Lunar New Year parade with that color scheme.

There was that episode "The Golden Lagoon" where the Autobots dipped themselves in electrum as armor. Electrum Sideswipe variant!

I just bought the KO sideswipe, because I cant afford the nearly 100 bucks the Takara one costs, besides... think is too much money for a 6 inch figure, alternators and binaltech goes for less and their have a lot of effort put on their enginnering too... In resume, less expensive, more adequate price-satisfaction-money ratio and is almost (by a frog hair) the same as Takara...