There are three things In this life that I really love: robots, motorcycles, and females. I've had to give up the females in the plural sense since I got married, but this toy combines all three in a neat little package. You may know her as Arcee in the Hasbro Universe, but this version comes to us from a non-official source called Perfect Effect, which is a Third Party company. Because of her origins, she is called Motobot PE-DX01 RC. Although she does not come from Hasbro, there are lots of reasons to give her a look.

Motobot comes in a smallish box with a window that gives a sneak peek of what's inside. There is some really nice artwork on the front of the box. 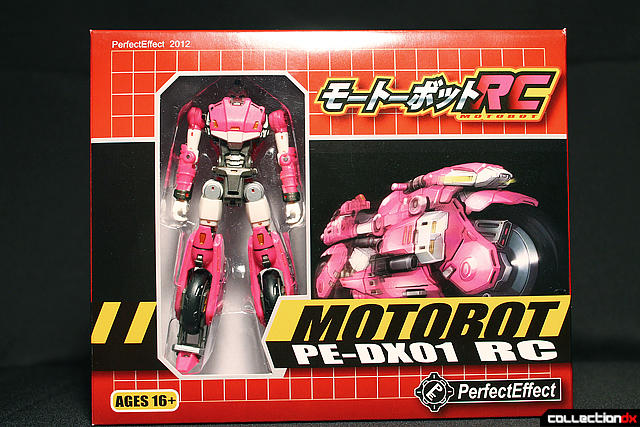 The back of the box shows some pictures of the robot, which if I'm not mistaken are CAD rendered drawings. 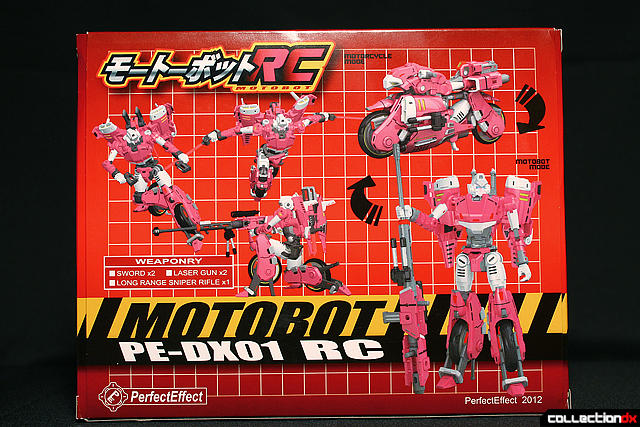 Here she is out of the box before any accessories are attached. She is what is referred to as "Deluxe" class size, which is in the 5"-6" range. She is made up of high quality plastics and diecast metal. 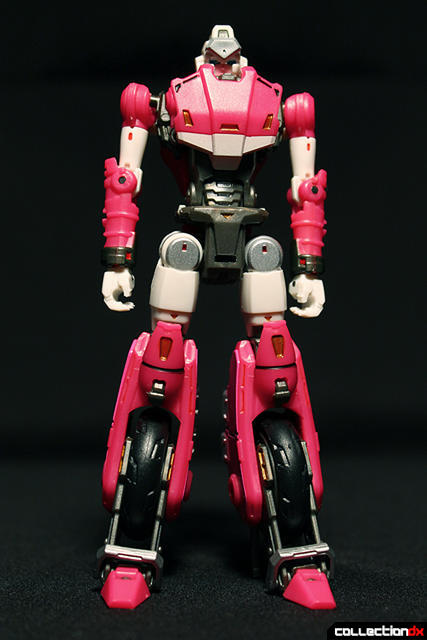 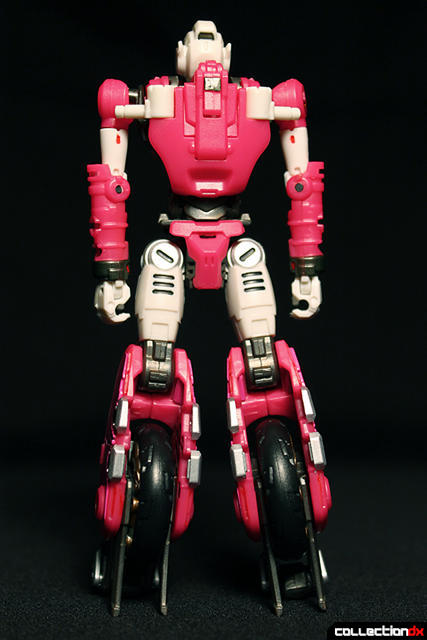 Her accessories combine to form her sniper rifle, which is a nice size. Here you can see her wing pieces attached to her back. 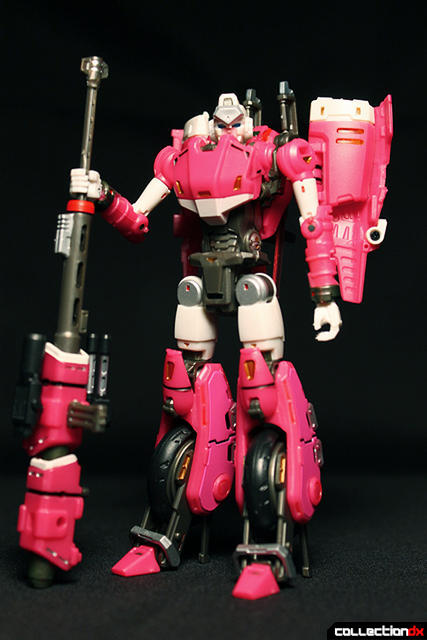 I've said it before and I'll say it again. I love robots that can kneel. Some half-ass their kneels and some do it well. In Motobot's case, its an awesome kneel. 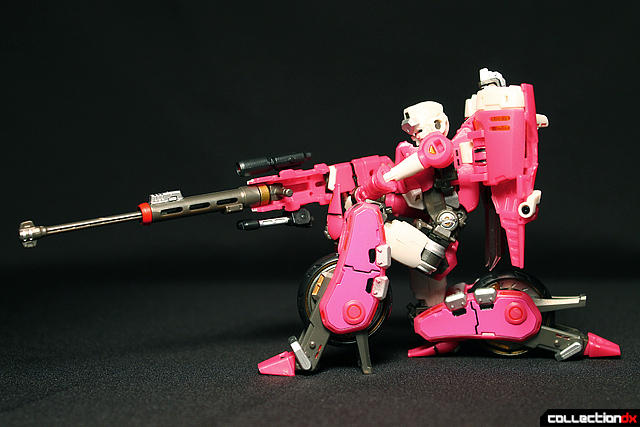 The scope even lines up nicely to her face thanks to the wonderful articulation in her arms and wrists. 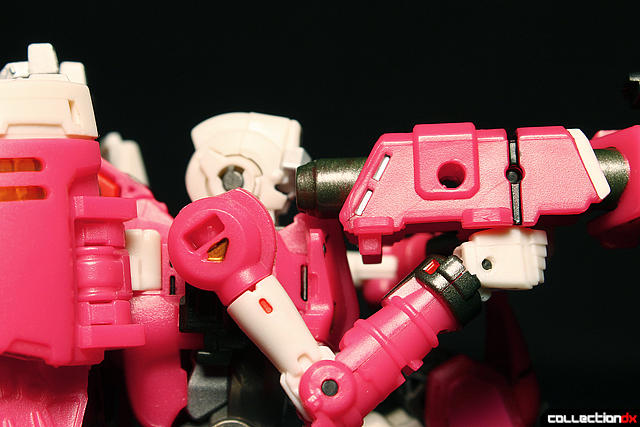 In between her wingset, you can store her two swords, which stow away nicely. 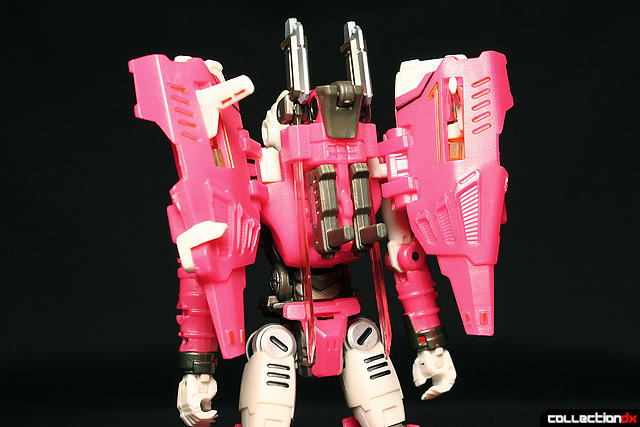 Why stow them away when she can hold them in both hands and slash away? 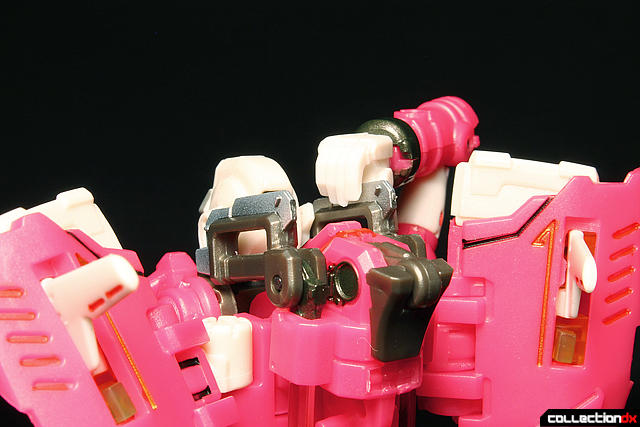 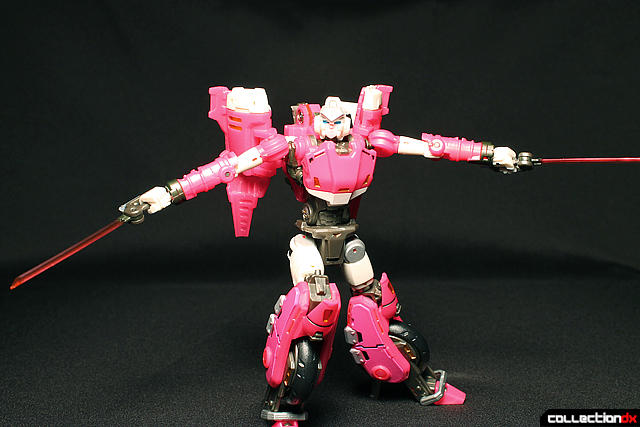 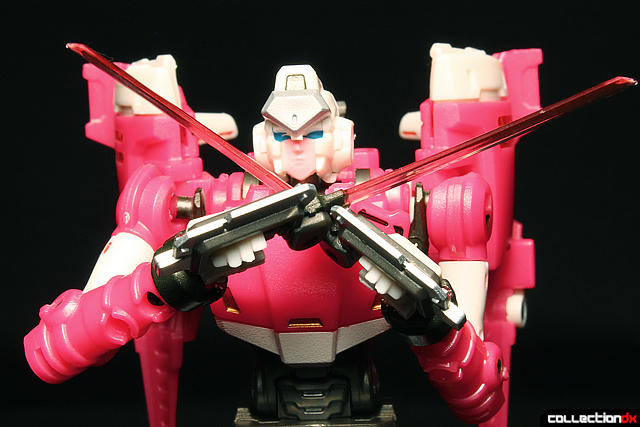 She also has a pair of guns, which fit nicely in her hand. 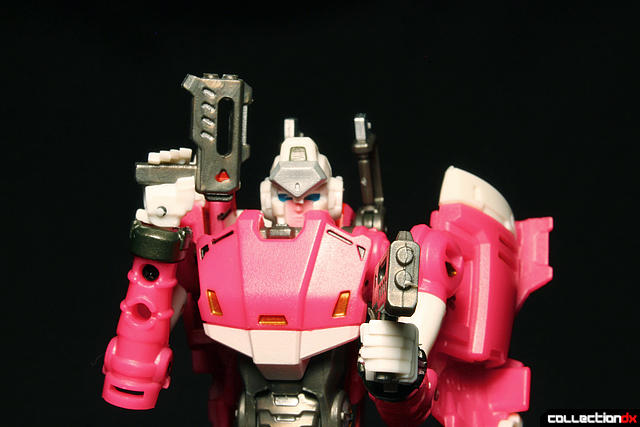 If you were wondering where the diecast is on the figure, it's here in her legs. Each panel on the sides of her legs is made up of this great material. It's not much, but it's there and very welcome. 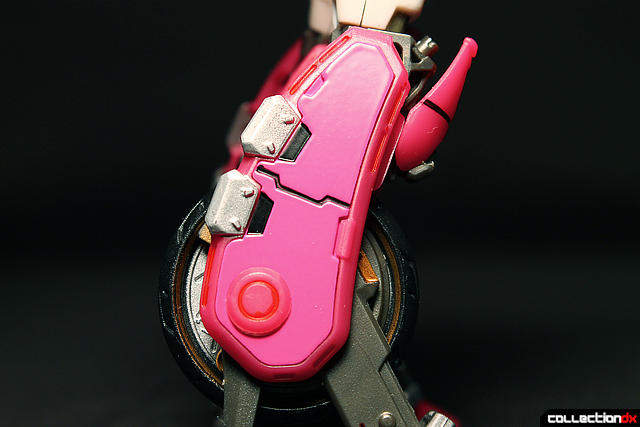 The face is very faithful to her G1 look. The sculpt is very well done and detailed. The ears push in and pull out for transformation. 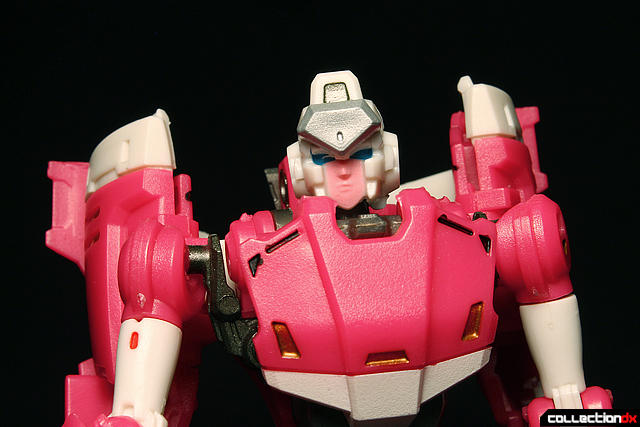 There is an included visor that is apparently for all the detail oriented collectors because unless you absolutely need to have it on her, it's not worth leaving on. You will lose it as it falls off very easy and it's the size of a grain of rice. 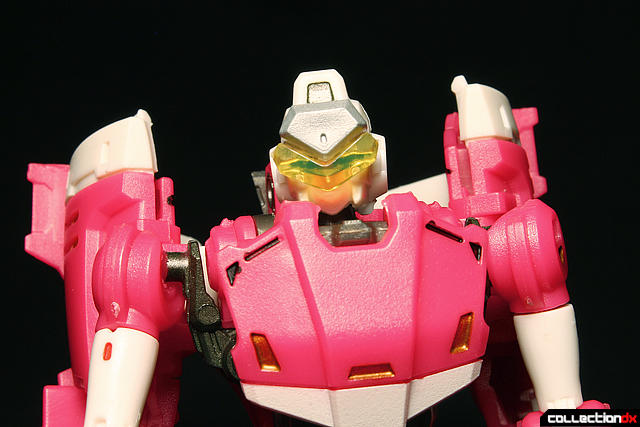 She's got a pretty cool transformation.

If you want to see the entire review that expands on what I cover here, check out the full review video.

Alternate mode is a rather futuristic if not uncomfortable looking motorcycle. It reminds me of a Mospeada bike to be honest. A plus for me. 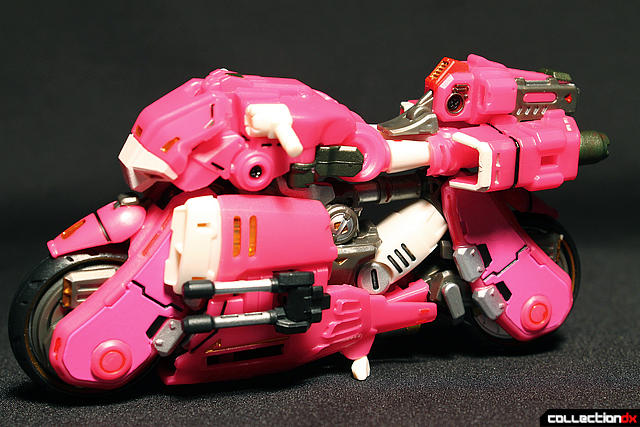 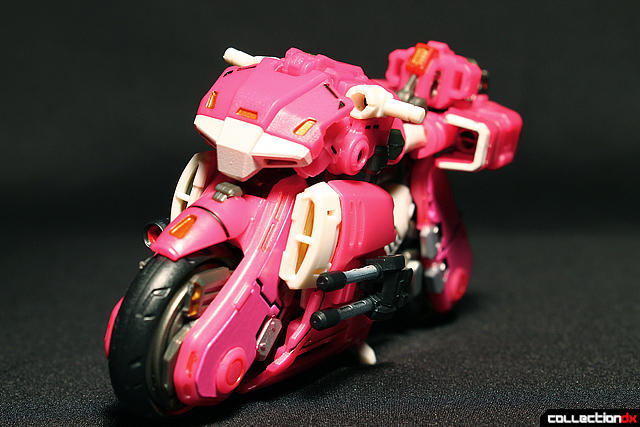 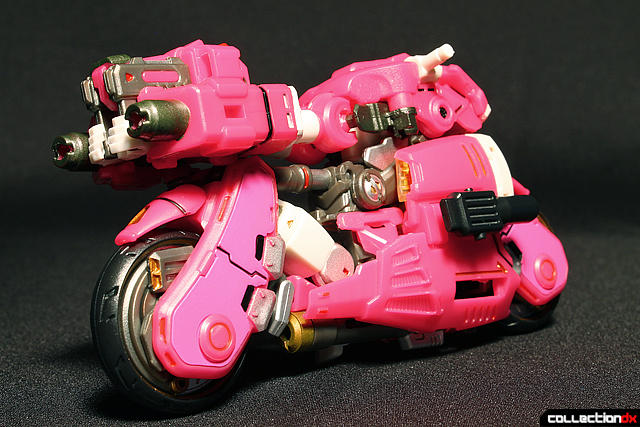 Although some people complain that parts have to be moved around for transformation, I love the fact that every single friggin' piece is used to complete the alternate mode. I do mean every piece. Here you can see how the rifle barrel forms the underside exhaust. 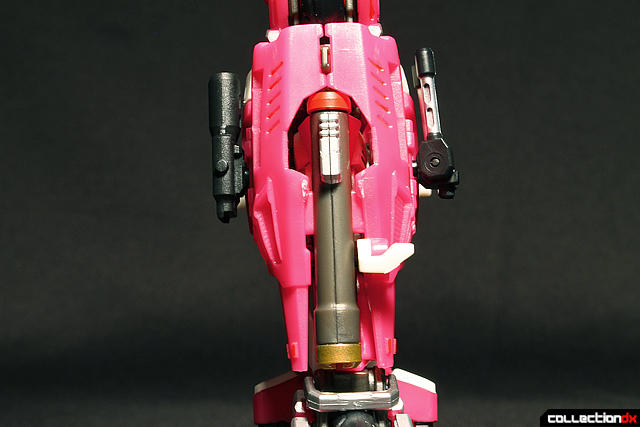 Every part just falls into place. The rifle clip even forms the radiator on the bike. Very well thought out and engineered. They even got some bits to come together to look like an engine! This is something I can appreciate as a gear-head. 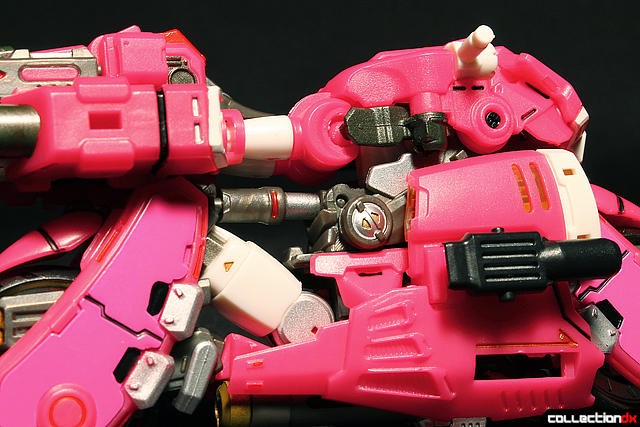 Motobot rings up at $99, which is a bit much for a casual Transformers fan. If you are hardcore fan who is willing to pay a bit more for a high quality figure, you should give this release a look.

If you don't dig pink, you can pick up the Motobot PE-DX01B, which is the same figure done up in a blue color scheme just like the Transformers Prime Arcee. Both of these can be found at BigBadToyStore.com who provided us with Motobot for review.

I'm so glad to see photos of this figure in hand; that is seriously some nice plastic :3
Can't believe that articulation range, either.

It's nice to see a really -- and I mean, REALLY -- nice figure of Arcee. She seems to get the short end of the stick when it comes to Hasbro, and for someone (like me) who likes her character a lot, this is a godsend.

If a Masterpiece Arcee never comes out, then this will most likely be a buy for me.
Thanks for the review.

... looks really appealing and I like the design of the motorcycle mode. Too bad that the price it's a bit expensive.

I totally agree with you, chachipower-san.

I also respect the toy designer! That's perfectly beautiful...gimmicks, shapes and something like that.

Adding moe aspect would be appreciated, like Kotobukiya's Jaina Solo!