October is here, and we're bringing the pain with a month of bootlegs, monsters, and downright scary toys. First off - the terrible Morphbot!

I picked up this guy when KB was going out of business. I only paid a few dollars for it, and I bought it knowing it would suck. I thought it would be fun to chronicle it, and then maybe pass it off to my kids.

The box is pretty large, with a nice die-cut window and a try-me feature. One side of the box has a beveled edge for some reason. 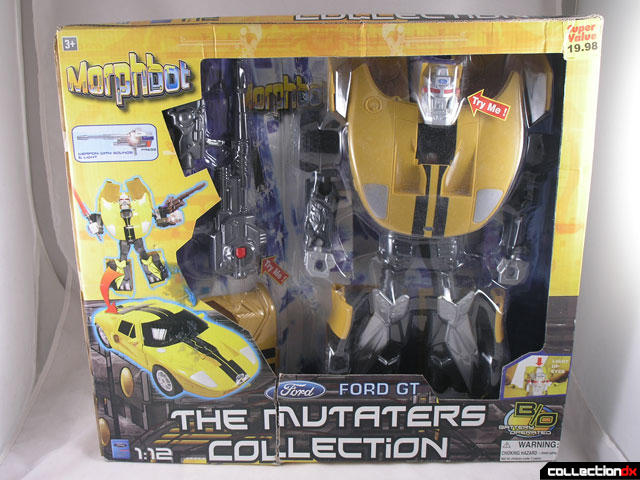 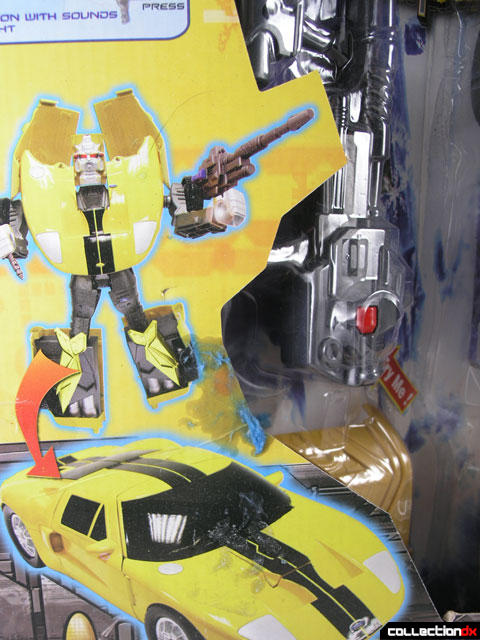 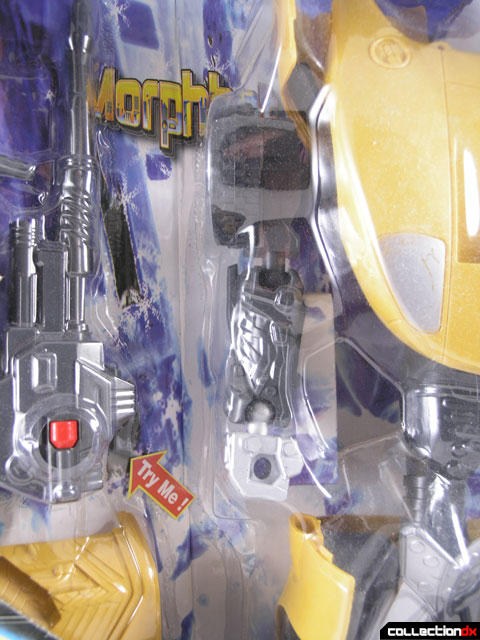 The box has the usual photoshopped graphics, but I was surprised to see that this was licensed by Ford. Of course just because it has a logo on it, doesn't mean it is actually legit. Perhaps in the great automotive industry, this application got overlooked. 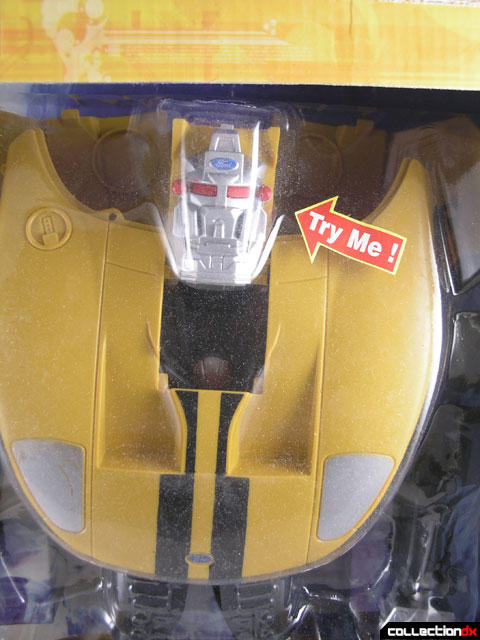 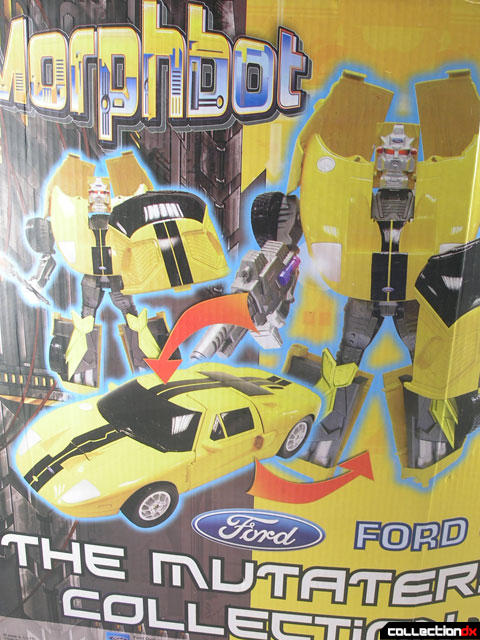 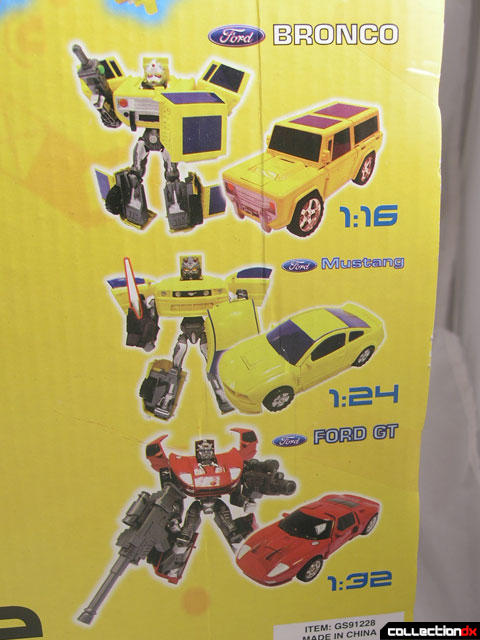 Morphbot is a 1/12 Ford GT sportscar. It looks like it belongs to the Roadbots toy line, but i couldn't find it. They have a ford GT, but it doesn't look like this one. 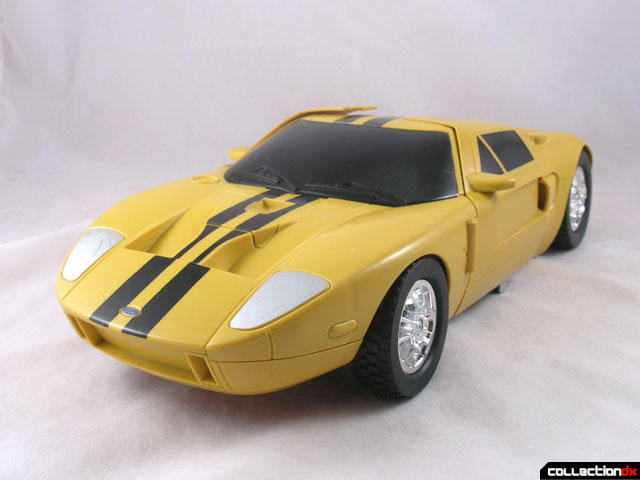 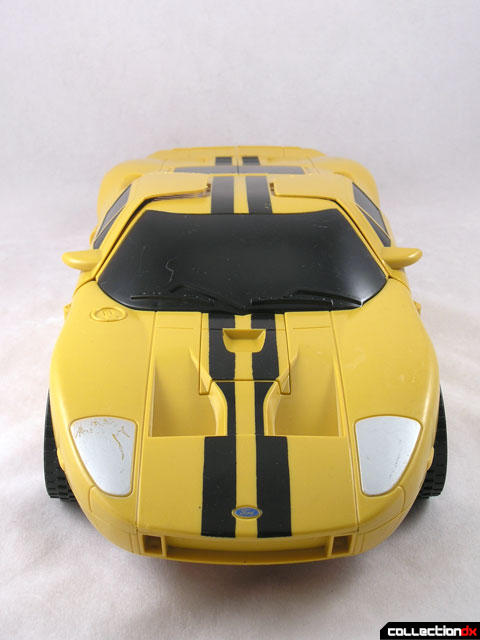 In vehicle mode, the GT is almost a foot long. It's big, and the vehicle mode actually doesn't look that bad. The wheels are hard plastic, and nothing opens. 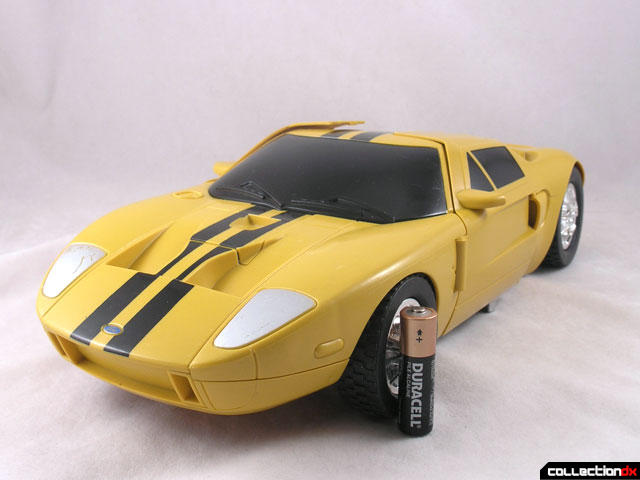 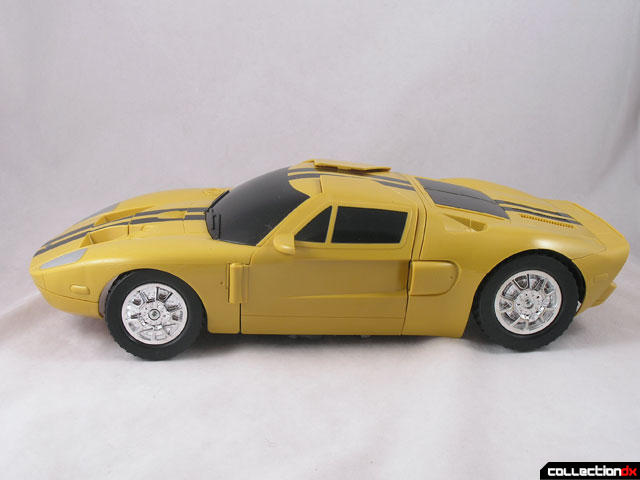 The size is about the only redeeming quality of this thing. The material is a toxic, crayon-like plastic. I swear, if I get cancer someday, you can blame this. I felt like I needed to sterilize my hands after handling it. 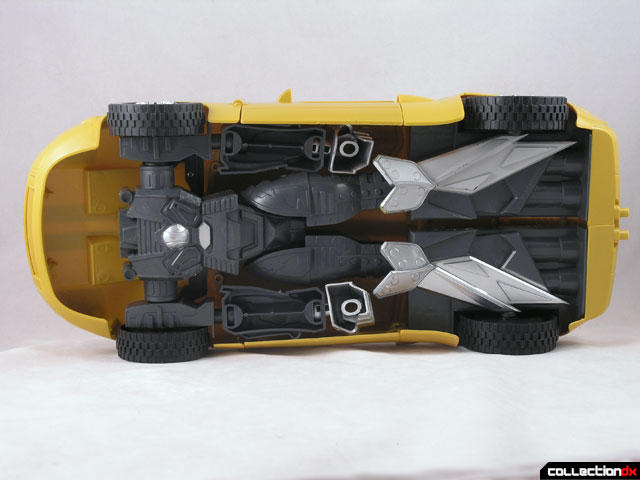 Transformation is simple in theory, but because the molding is such crap it basically starts to transform as soon as you pick it up. Nothing in this toy is precise. All of the joints are ball joints that have too little friction to hold any pose. 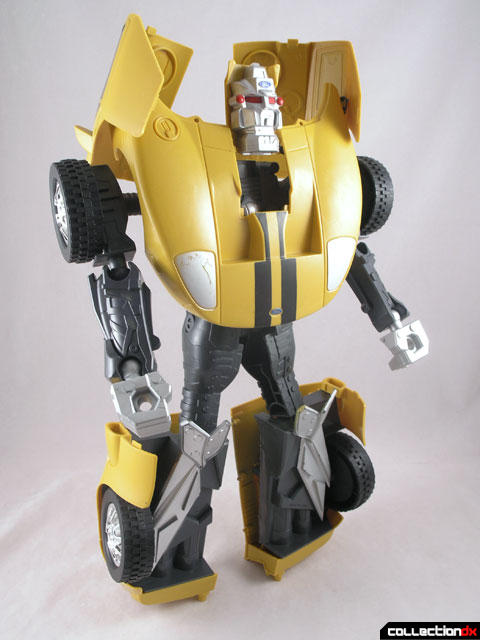 So there is the transformation as depicted on the box, and then how I think it was supposed to go.

If you go by the way it looks on the box - forget it. It looks atrocious. The nose of the car is flat down, and the doors have to be removed and re-clipped onto the back. ugh. 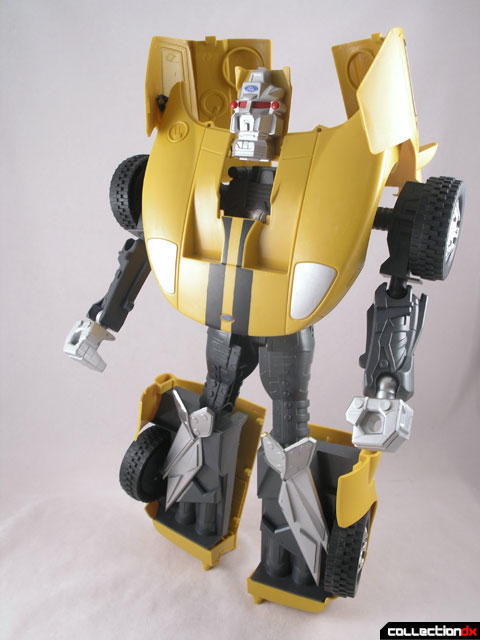 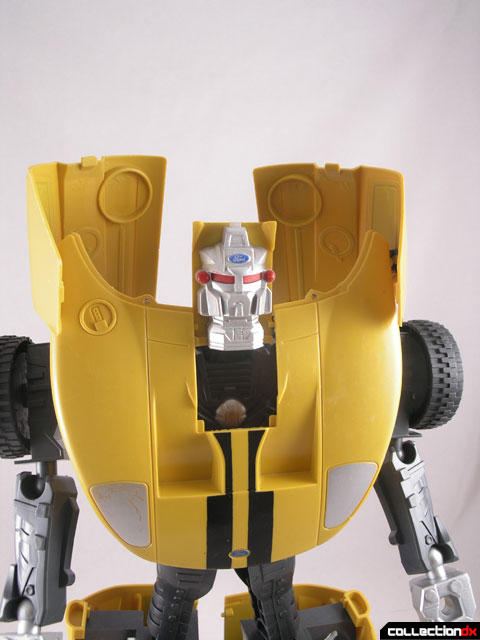 However, you can get a manageable robot mode out of it by pulling the nose up and leaving the doors attached like a classic G! transformers style. 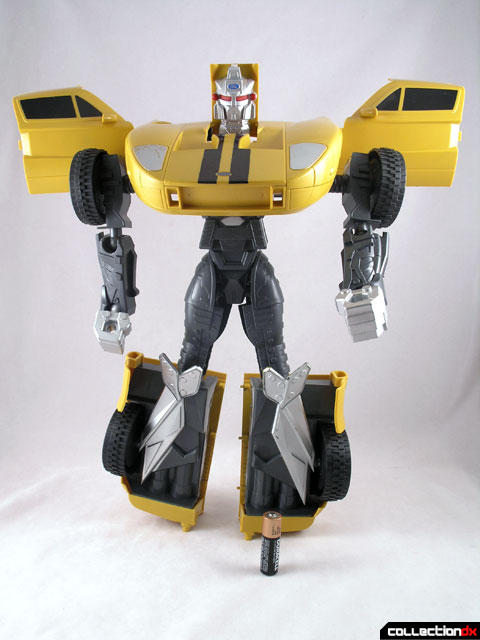 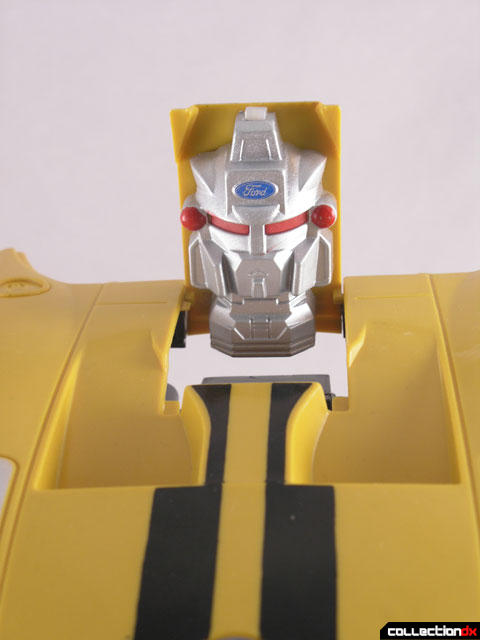 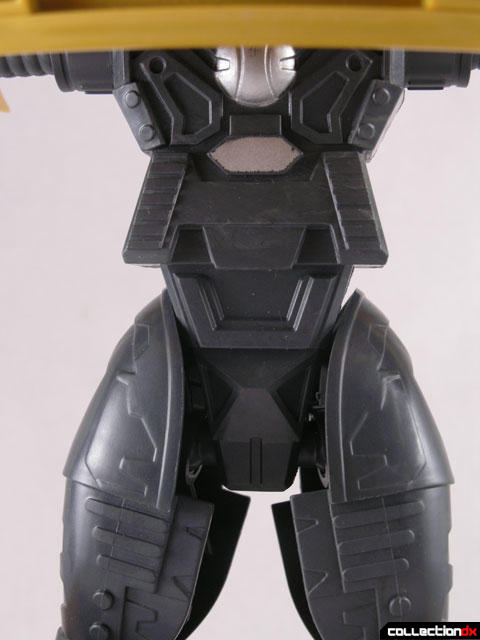 Articulation is good in theory, but the joints are too loose to do anything but stand up. 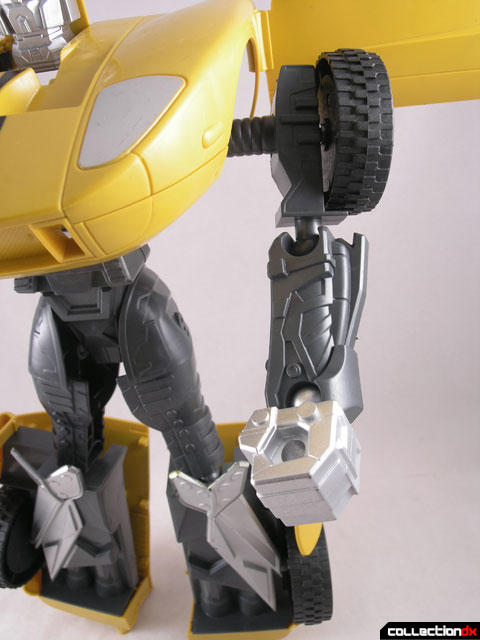 Morphbot comes with four weapons: A battery-powered rifle with sound and light action, a spear, a small gun and a shield (made from the roof of the car). All are lame. 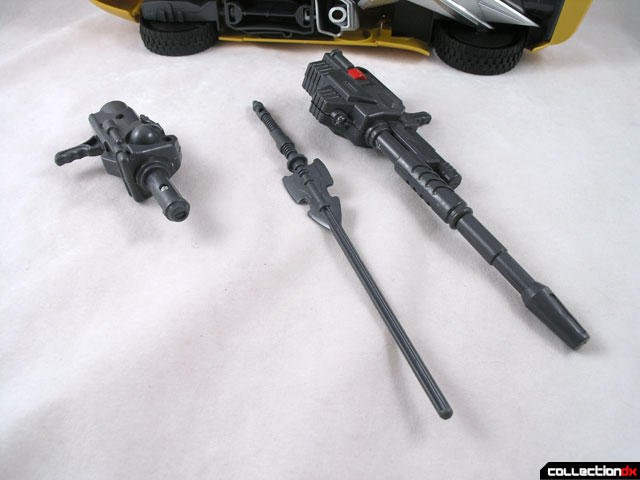 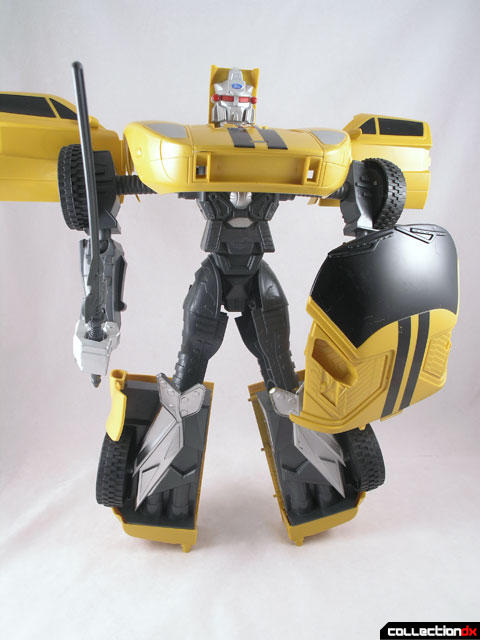 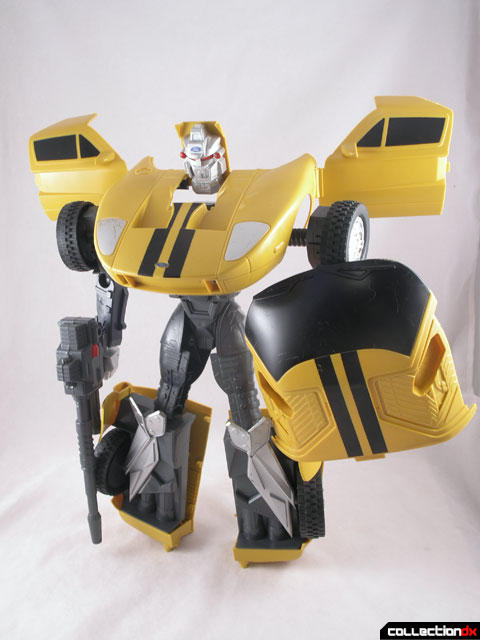 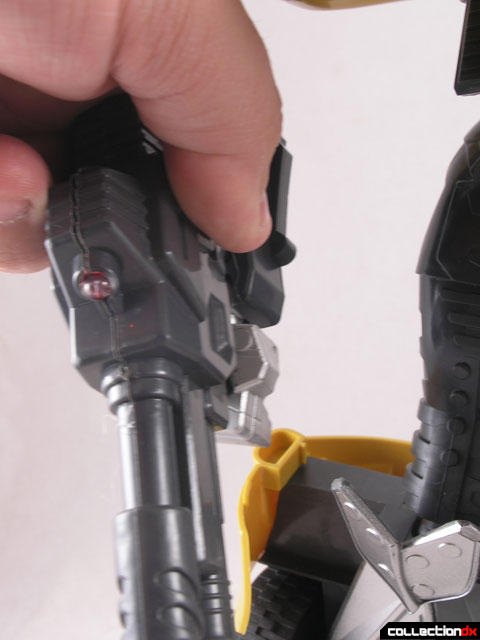 After the review, I gave this to the kids. They thought the robot mode sucked, but they liked the car mode for the few minutes it held together. In minutes, it was in parts across the floor, already forgotten.

Off into the trash it went, to join its brethren in landfills across the world.

11 comments posted
May this site grow into a

May this site grow into a scintillating bootleg toy library. You bring us one step closer to this paradise.

Ugly, but not sure how come call it a bootleg. What specific toy does it copy?

that it wasn't too long ago that Transformers were very similar (in complexity).

Agreed ... not to get a little off topic here, but this Roadbot knock-off and your comment echoes my thoughts on the Battlestar Galactica remake show, which is in fact a knock-off of a 70s Star Wars knock-off show.

Even the term 'reimagining' is a knock-off of a 'remake'.

Now I'm gonna get creamed by 'frakkies' for that remark.

I remember the local KB getting in a ton of these right before they closed their doors for good. I was tempted by the size and the huge discount, but I'll be damned if every single Morphbot wasn't shattered inside the box. Despite the vacuformed coffin, each bot had a head or arm or leg floating around with other miscellaneous bits. Yikes.

I was a manager of a KB toys, and I recall being tempted by these... for all of about a quarter of a second. Then even as we were going out of business and these things became cheep as all hell... Well, I don't think I'd have taken one home if it was closing day, there was a pile of them left, and I could have just walked out with one without a care in the world.

I did take the store's safe home, though... Never know if that might come in handy. ^_^

Ummm... isn't this what's called, a waste of money.