I was a little indifferent towards Transformers Power of the Primes Moonracer when she was revealed, and having her in hand I can’t say I feel any differently! I like the figure decently enough but I can’t say I particularly love it or strongly dislike it either. As a character, I really like Moonracer’s design, and as a female Transformer I’m really happy she got made, but I can’t get too excited about her.

In robot mode, Moonracer’s best aspect is her head sculpt which I absolutely love, it’s adorable! I especially really like the lavender paint on her face, making it stand out a lot more than it otherwise would. The rest of the robot mode is just fine, as her sleek design is only there in part, as it is broken up by kibble that just kind of hangs off of her without compressing that much at all. This is especially prevalent in her huge backpack and the wheel wells on her shins, as they take a robot mode design that would look really good as a figure, and makes it look more average than anything. This is especially disappointing to me when you consider how simple the figure’s transformation actually is, the engineering as a whole just feels a little half-hearted, which is a shame because the painted details and actual aesthetic design of Moonracer’s robot mode is really unique and cool looking to me, especially next to Jazz, I think the two look great together! 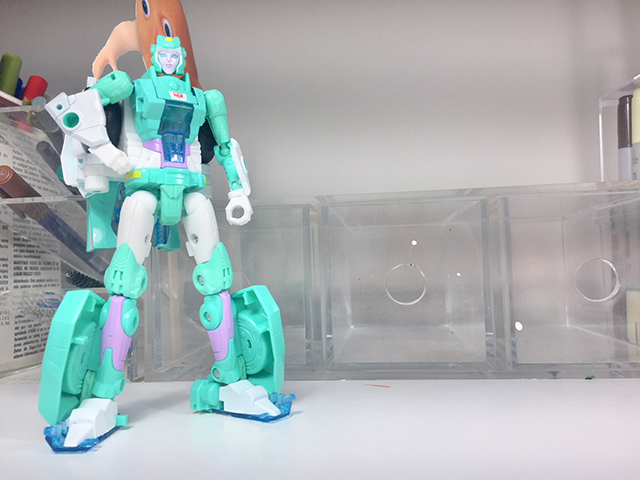 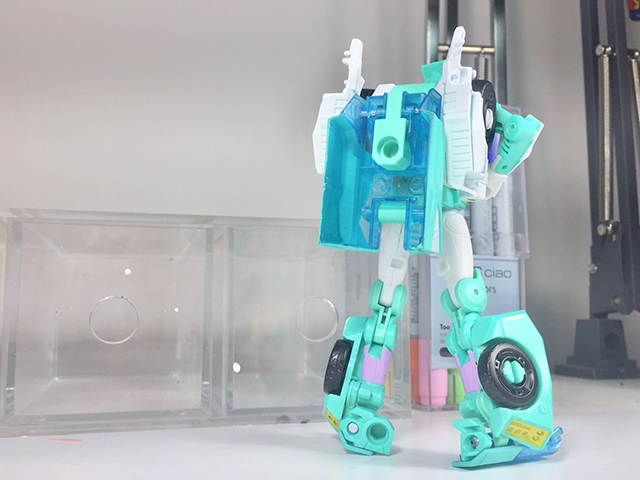 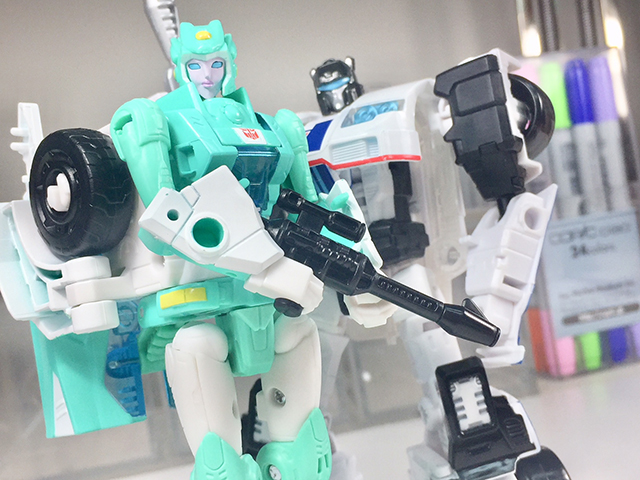 As far as accessories go, Moonracer has her prime armor/combiner hand and a small black rifle. I really like her gun, and she looks pretty good wielding it, but again I just can’t be too enthused by the Prime armor, it just seems a little haphazard and not fully thought out to me! 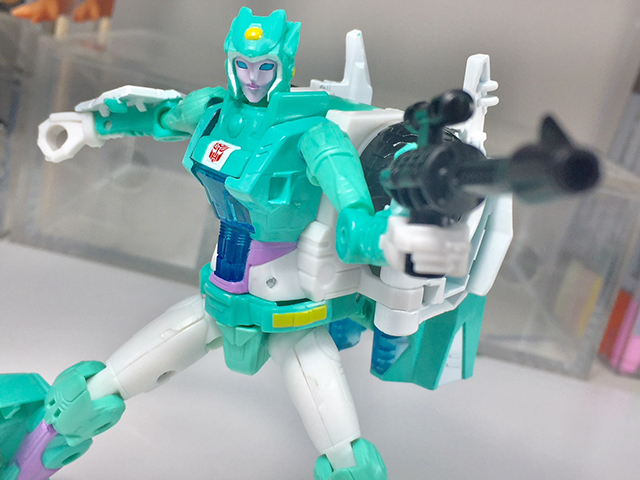 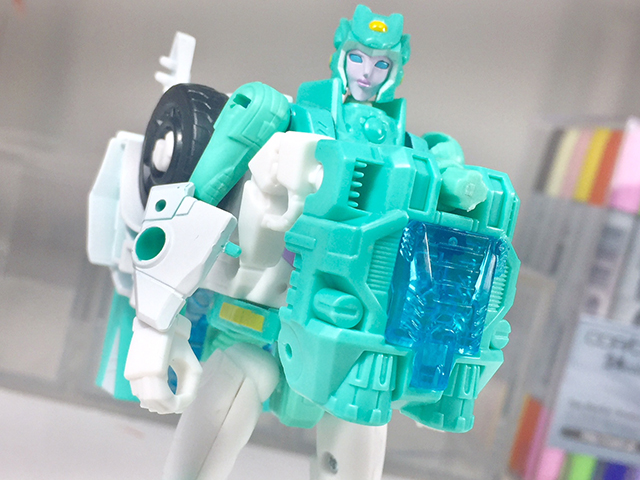 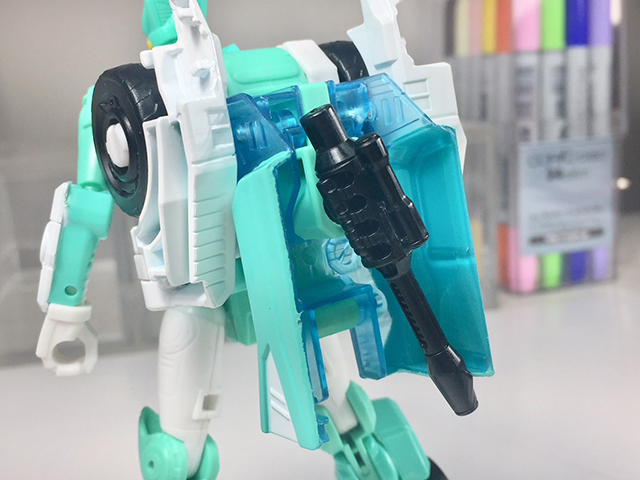 Moonracer’s transformation is pretty simple and honestly not very interesting or intuitive, but I actually think it can be fun to perform too! Her hands fold in and her arms go over her head to be locked in place by the white wheel well panels on her back, while her body is folded outward so her head can be replaced by the back of her car mode. You can just rotate the head around and push it back instead of you want to, but I prefer completely hiding it like this. The feet just fold up, the waist rotates around, and the car canopy just folds down from her back, completing a pretty interesting cybertronian car mode.

Moonracer’s alt mode is that of a slim cybertronian car that retains the implied feminine shape of her robot mode in a way that makes it look pretty small, fast, and unique! I actually really like the look of this mode, especially the windshield that was the bottoms of her feet, the whole thing just looks so cool to me, while the color scheme’s white turquoise and translucent blue make it look more playful and cute. My only real hang up with her alt mode is the fact that her hands aren’t necessarily hidden, as they are clearly visible from the back, but really this isn’t a huge deal to me. 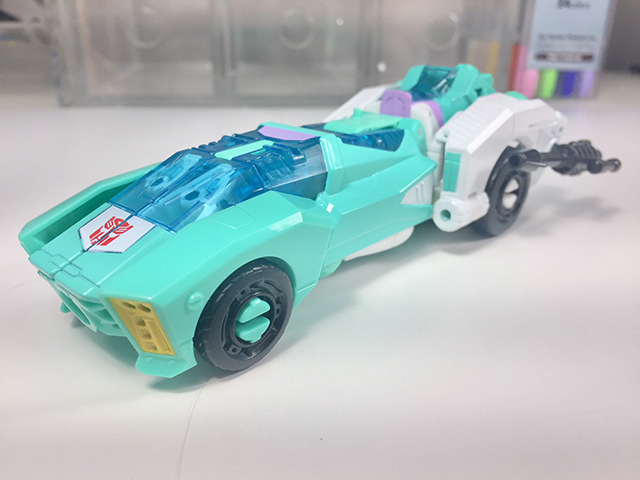 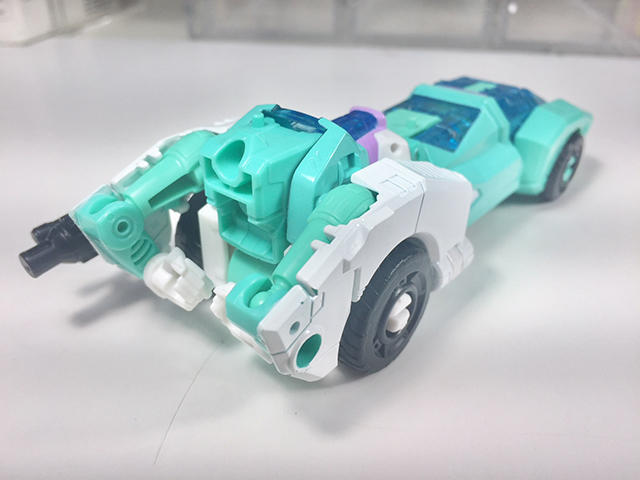 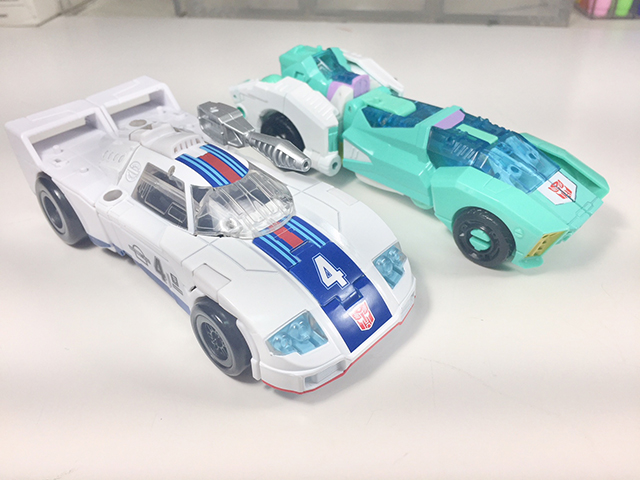 As far as her limb modes go, I really like Moonracer’s, especially the leg mode it looks pretty solid, and the arm mode’s use of the car canopy is pretty interesting too. The actual design of this figure as a whole is pretty refreshing to me all things considered because it defies the copy-and-paste nature that Combiner wars and Power of the Primes both somewhat possess. 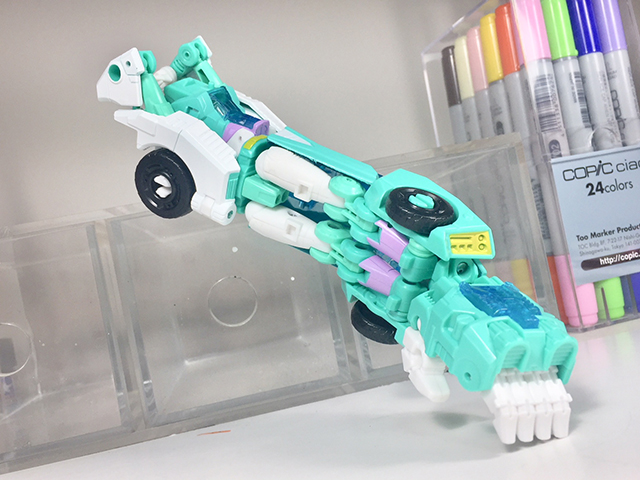 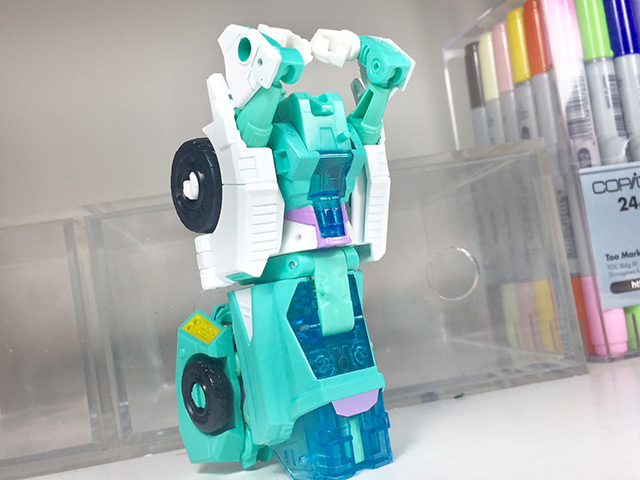 Overall despite my definite problems with Power of the Primes Moonracer, I can’t be too bothered by them, because just visually there is a lot to like about this figure, really I feel like if it was handled s little better Moonracer could be a very beloved figure, but as is she is just very ok. Her cute color scheme and design in both robot and vehicle mode is a definite strong aspect of the figure, but her half-hearted transformation and huge backpack really lets it all down considerably. Honestly, I would still say Moonracer is harmless if you still want to pick her up, but really you wouldn’t be doing yourself a huge disservice if you didn’t. Maybe others like her more than me, and don’t get me wrong I don’t regret buying her, I’m just a little disappointed.