Home » Sideshow Collectibles » The Monster from Bride Of Frankenstein

The Monster from Bride Of Frankenstein

The second entry in Universal Studios Frankenstein franchise was 1935's "The Bride Of Frankensein", which is considered by many to be the greatest horror movie ever made.

Sideshow Collectibles would follow up their 12" Frankenstein Monster with the Monster from Bride Of Frankenstein, giving him a whole new look. With the exception of the hands and the head, the same generic doll body is re-used here, but everything else has been changed. The monster now has a significantly different jacket on, sharper green than before with tears along the sleeves and the interior fabric showing. The undershirt this time is much thicker than before making him look bulkier. Still not quite as massive as I'd like, but a definite improvement. 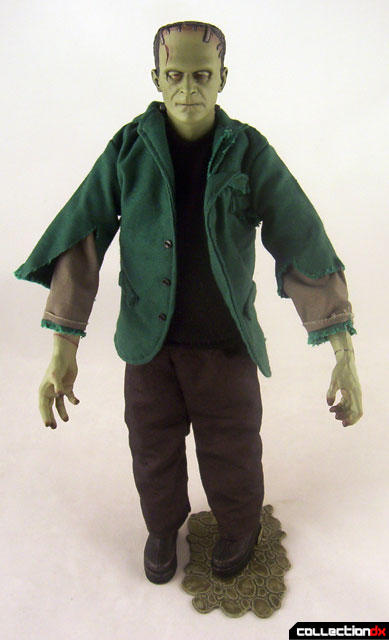 The pants are longer and shinier than before and even the boots have been slightly revamped for this release. There is a bit more detail on the tops and near the toes and the bottoms are different. Now there is a tiny hole on the sole of each boot, as though it were intended to stand on a base with a peg. But that's not the case. Instead you have the same base as before, with a horseshoe shaped ridge that fits around the boot. It seems odd that they should make this change and not utilize the new feature. Perhaps the boot was simply borrowed from another doll? I'm not sure.

The head on this version was significantly changed as well. The neck is shorter and the forehead bigger. There is more detail in the mold of the hair and face shows some injuries. The only change here that I don't like is the the electrodes in the neck are less pronounced.

The articulation at the wrists was removed for the release and now the hands and forearms are all one solid piece. This isn't really a big deal to me. Frankenstein probably shouldn't be TOO animated anyway. But where Sideshow dropped the ball here is that above the forearms, they used a regular flesh colored plastic! So if you turn the arms too much, you can see his arms are not one uniform color. 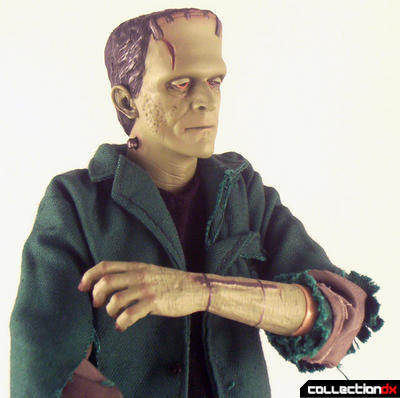 This is far and away the most annoying thing I've encountered with this line. And it's doubly frustrating since the first Frankenstein was entirely green. Normally a toy company will make a mistake with an early release, and then correct it in subsequent ones, but somehow the opposite has happened with the Sideshow Frankensteins. All four releases to follow would have the same problem.

Accessories included with this doll is a base, a pile of bones (one solid piece) and a skull with an opening jaw. Be careful that you don't snap the jaw off when removing the skull from the plastic tray. It's probably best to lift the tray out and push up on it from underneath, just to be on the safe side. It's not fragile, but it's sort of hard to grab from the top. 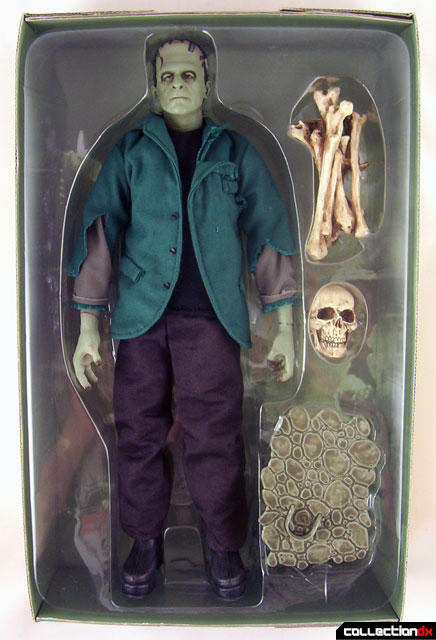 The packaging has been improved over the first Frankenstein doll. You still have the box with the original poster art, which can be flipped open to reveal the toy inside. But now you have a removable plastic tray that rests inside to hold everything.

With the exception of that pesky flesh colored upper arm, this is a great toy. Even with it, no Frankenstein fan should be without this. 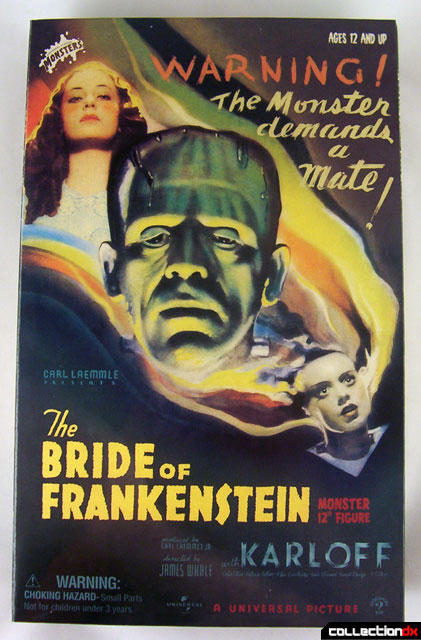 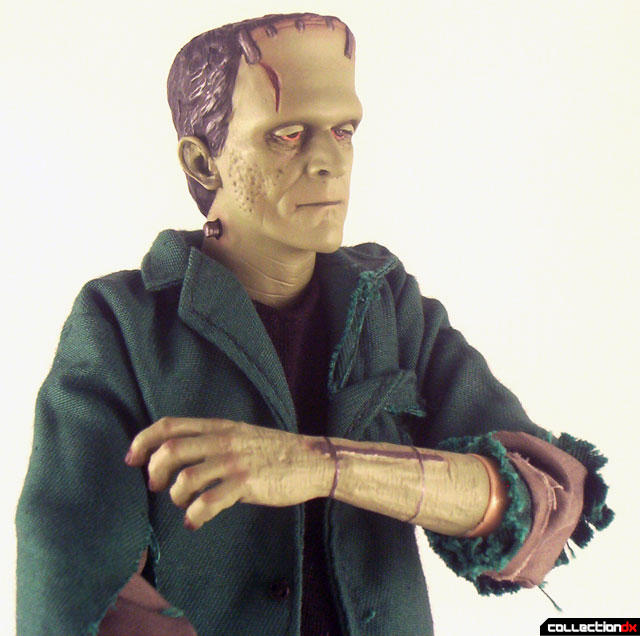 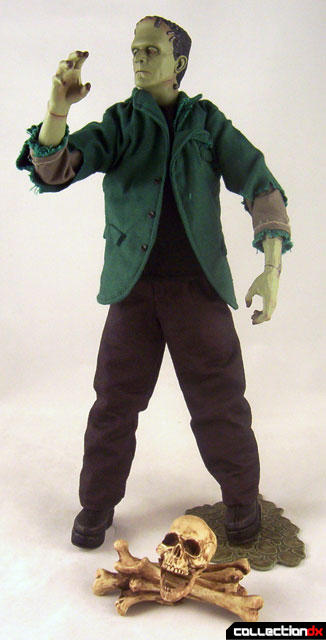 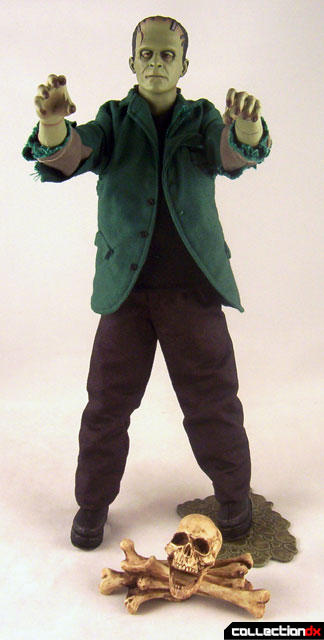 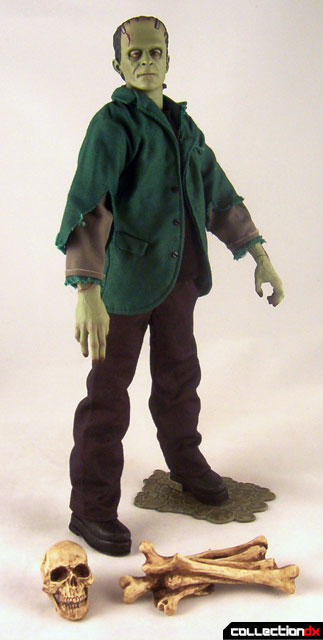 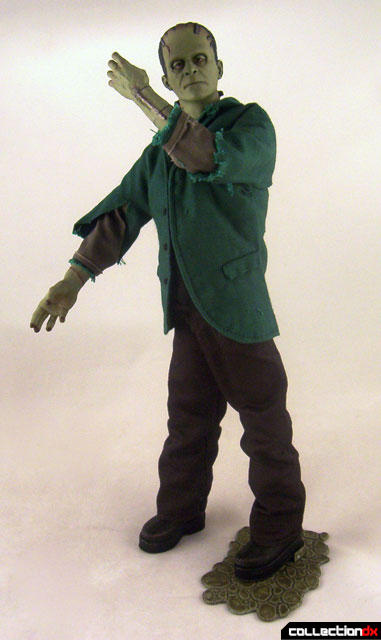 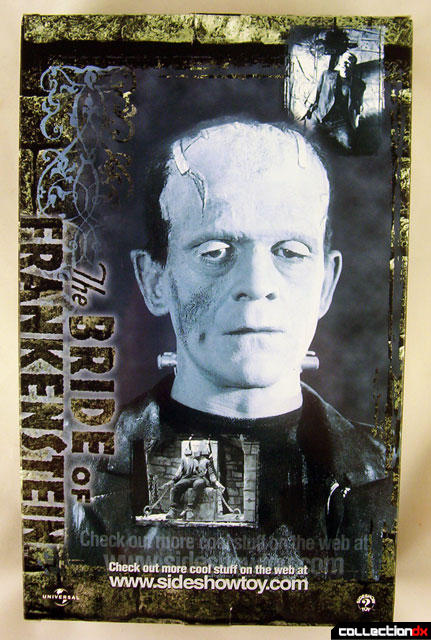 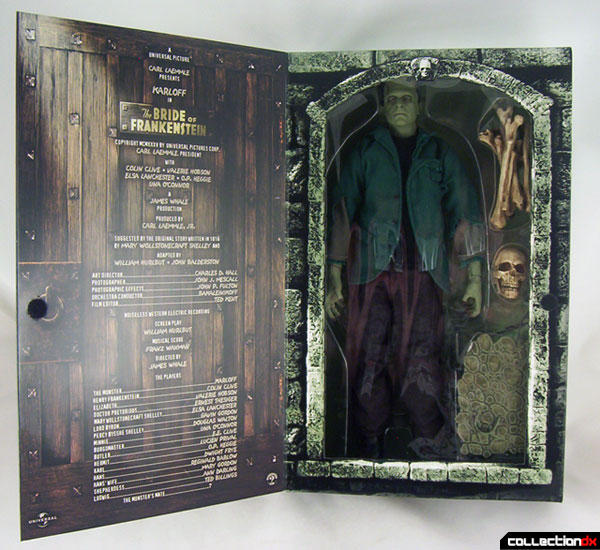