As far as I can tell, Mighty Max is a one-off, standalone robot toy from future Zoids powerhouse Tomy. Mighty Max is firmly in the mid-seventies Evel Knievel mode: a red, white, and blue action hero. It’s all very American, except for that head. Max’s chrome lid is obviously copied from the venerable Henshin Cyborg. Tomy’s nemesis Takara had experienced some success with its re-tooled 12” GI Joe figures, and I imagine that Max was Tomy’s attempt to replicate Takara’s success, but in the American market. The slavish replication of the chrome head is lame, but damn that head looks good. It’s like something out of a Russian Constructivist painting, angular and severe. And just look at this poor bastard. He may have a sweet motorized skateboard, but this man has known sorrow. 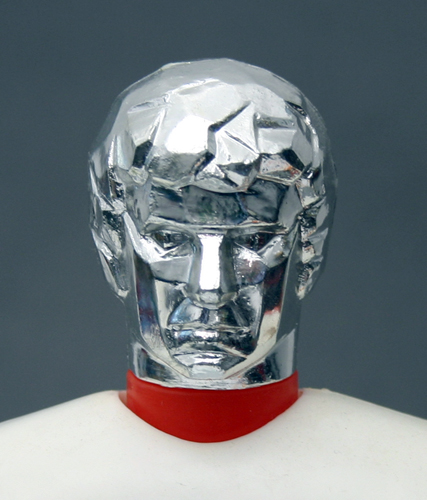 But let’s step back. MM’s box is a plain cardboard tray with a window cover. The graphic design is pure seventies funk. 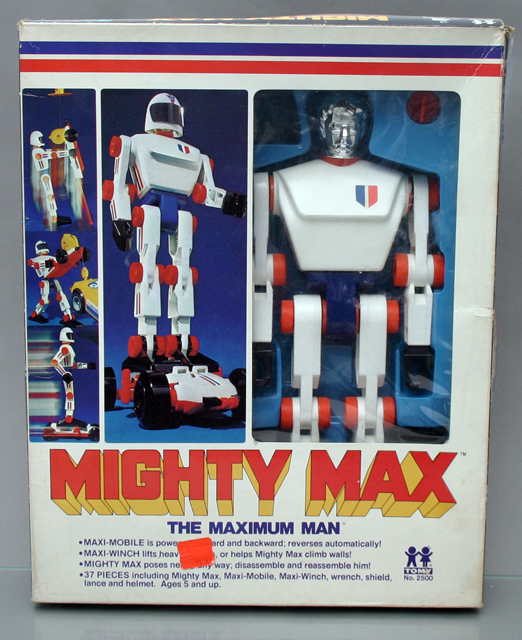 Inside, the figure itself rests in a flimsy plastic tray, and the accessories are just kind of thrown in. The playset consists of the Mighty Max figure, a battery-powered motorized skateboard, a lance, a shield, a helmet, a joint tool, and a winch. A couple of rubber gaskets for the joints were also included. 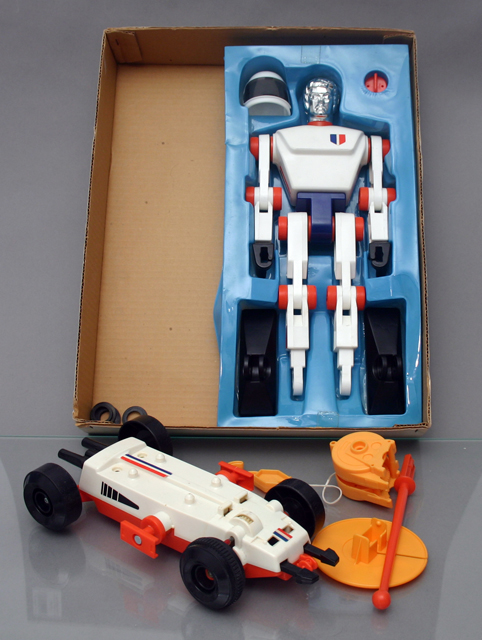 About those joints: One of MM’s main gimmicks is that he’s held together largely by these orange fittings. A little tool is included to tighten them, though their ridged edges enable you to do so without the special tool. 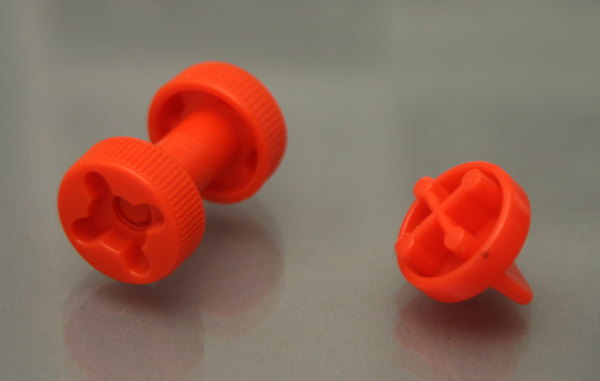 This is all fine, but there’s no actual play value in the joints. You can take apart his limbs, but that’s it. You can’t reconfigure him into anything interesting. The joints are useful though in the sense that you can tighten them to stabilize certain poses. The base figure is striking in its simplicity. The blockiness is complimented by the subtle decals and details, and the head, of course, is sweet, even when partially concealed by the space helmet. 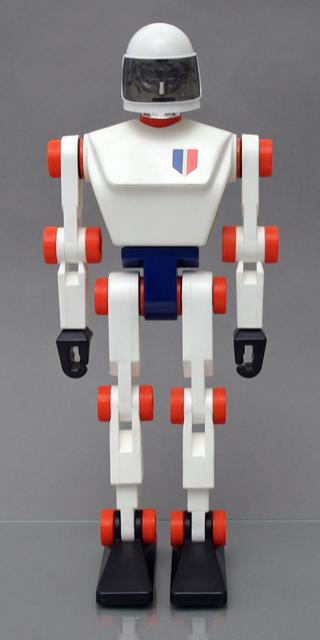 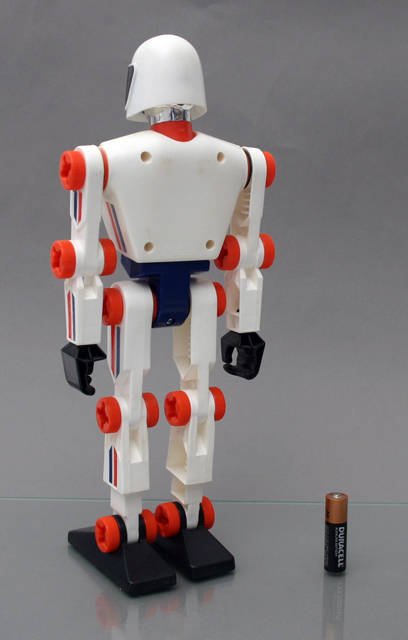 All those joints enable a certain amount of articulation, but it’s mostly in one direction, which gives any posing a distinctly “dancing ‘the Robot’” flavor. But look, a waist joint! In 1976! 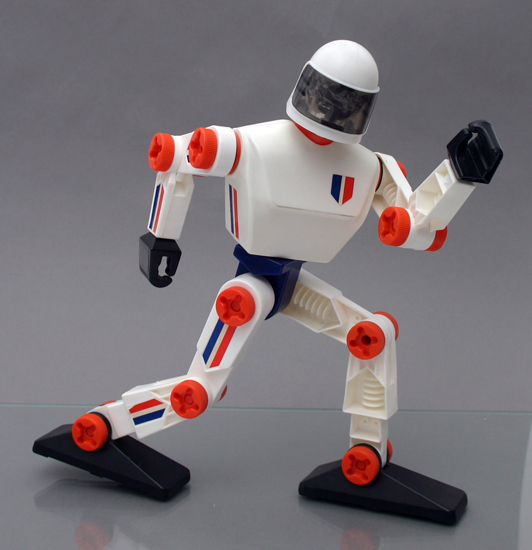 While the figure itself is appealing, it really comes alive with its full array of accessories. 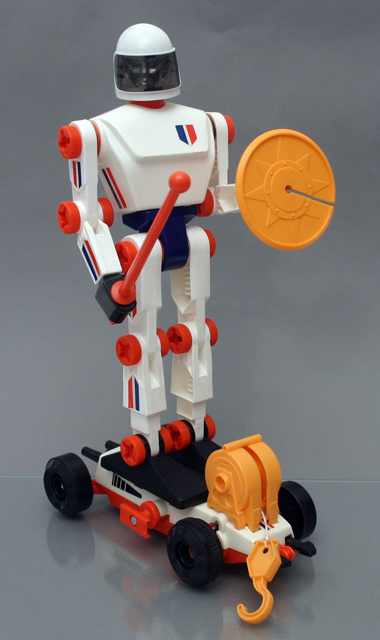 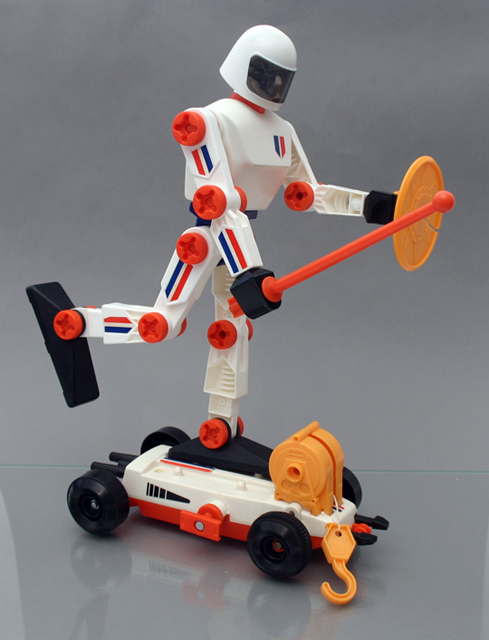 It’s all great fun, if a little goofy and stiff. Though I haven’t powered mine up, the sled/skateboard is a versatile plaything. In addition to rolling around and reversing direction when it hits an obstruction, the winch attachment enables it to be used as a towing or climbing tool. 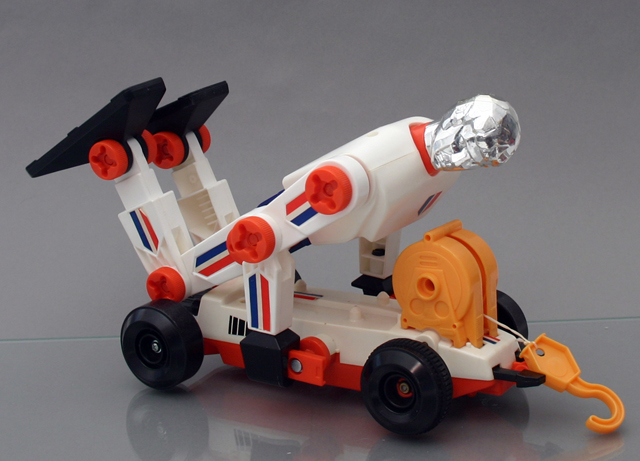 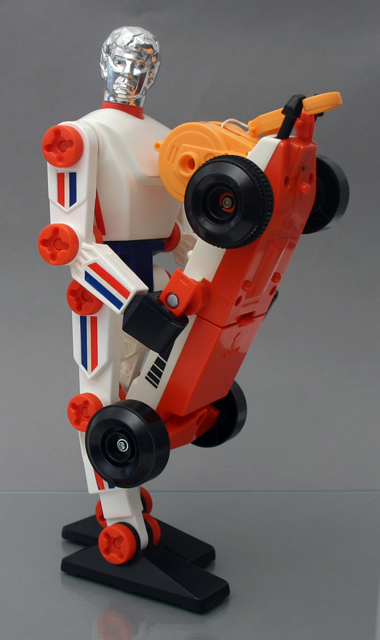 Mighty Max is a fascinating obscurity. How many plastic American robots were made with anything even close to this design sensibility? There was also a Gold-headed variation. I’m not sure which is more common, but I think the Silver is typical. 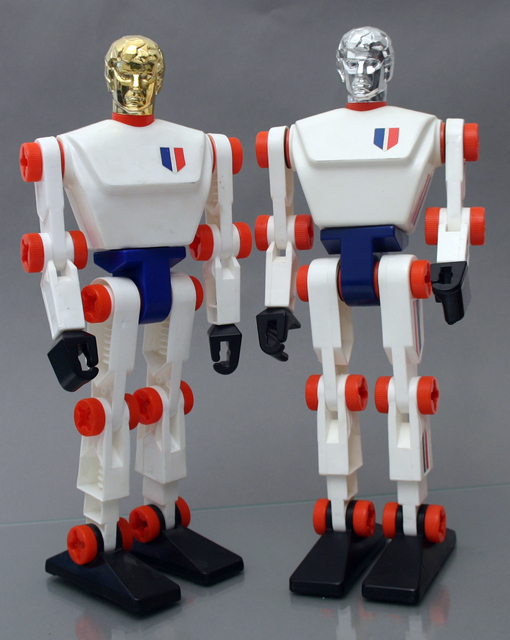 These are very cheap, like ten bucks with the box cheap; just keep an eye out.

24 comments posted
Though I would probably not

Though I would probably not buy one, I've always been somewhat intrigued by this toy, due to it's connection stylistically to the Henshin Cyborg/Microman universe but also to the 75cm Tomy Giant Robot that came out in the 60s, which uses a similar style to connect all the limbs and set the stage for the later Robot Factory jumbos..

Ooh...I would love to see a review of that bot. Looks pretty sweet.

And I would love to do a review of it.. but unfortunately, I don't own one. I do know it comes in two colors, gold and silver.

fantastic Review. I've seen this thing a few times, but never thought to pick one up. This review changed that. Awesome.

I remember this from my youth. This toy is no joke, every kid wanted one, but then Star Wars happened I guess. All the other toys got obliterated by Kenner Star Wars.

I found a MM at a flea a decade ago and I can't seem to part with it. The figure itself is LIGHT WEIGHT, but sturdy and fun. Another variation is a stubby orange plastic screw driver that is sometimes included. This guy definitely holds his own in an "odd man out" sort of way

Wow, it's like you guys have been raiding my toybox lately!

I'm pretty certain I've still got my boxed Max upstairs in storage. LOVED this toy as a child. It never even occurred to me that his head was a Henshin Cyborg ripoff. Ha!

Lots of play value in this guy, and with no official backstory to get in the way anything was fair game. He made a great spaceman or robot, as the situation demanded. And the joints were so unique. The point was to lock him into funky poses on his vehicle, whether he was riding it or using it to climb. It he'd had floppy regular joints, it never would have worked. Jousting was particularly fun.

I had this as a kid. I just thought of it as a giant Micronaut. In fact, not positive if I remember this correctly, but don't the holes on him line up to the size of Micronaut toys?

I totally want one of those. That's the kind of cool Japanese offbeat toy I could really get behind. Now I must search one out for $10. Assuming I could find one for that price.

If you're referring to Mighty max, it's an American toy, not a Japanese one. :-)

Actually, this was also issued in Japan. I have a pic of it, if anyone is interested. I've been wanting one of these for a while, but other things come up. As turk96 said, they typically run a bit more than $10, but not too expensive.

Max is indeed a fantastic, and much overlooked addition.
He's a big solid toy, and displays beautifully, like a supersized Microman.

I have a small collection of Gundam/Clover/Takara 70/80s stuff and a few big things like the 1/12 Gundam RX78-2. stuff..
I'll get pictures taken soon.

I draw comic books, so when I'm not doodling, I'm looking for the toys I wanted when I was a kid (I lived in Tokyo as a child).

Thanks for all the enjoyment this site has brought me..it's lovely to see collectors politely and kindly review toys, collections and their reminiscences.

I think one of the strengths of CDX is its civility and inclusivity (though Macross discussions can still be a little prickly). I'd love to see your collection or artwork. Most of us are old-skool comic nerds, so we'd all love to see your work, maybe in a blog entry.

And that one Valvrave kit review.

"It’s like something out of a Russian Constructivist painting, angular and severe. And just look at this poor bastard. He may have a sweet motorized skateboard, but this man has known sorrow."

Your grim tone here really cracks me up.

Many thanks Mr E!

I'll get photos taken of my collection ASAP.

I draw the new Tank Girl books, so if you google my name, you'll find art pretty easily!
We have a couple of face book pages, and our official TG website too.

Just had another Clover Gundam DX arrive this morning, (The one that fires the plastic disks out of it's chest)..and Dougram Magnetic model. I am 10 years old..hear me roar!

Thank you..I hope you enjoy them!
I really want to talk Alan into writing a Giant Robot/Mecha story..but maybe I'll save that for a seperate project!
I'd love to do a take on Dougram.

The first thing that came to my mind when I looked at this was the Hot Wheels Robo Wheels line that came out in the 90's. I wish I would've picked a few up back then...

Ah Robo-Wheels! Those were awesome. Plex designed those for mattel. I remember they were release in the early 2000's decade. The line lasted for a year or two. Fun toys, but a little fragile. Their torso limb posts where the arms and legs would clip onto could bend easily if you were not careful posing them. And NEVER pull the robots from their metal car chassis. Always pop the arms and legs free from their connection points with a fingernail and then remove and unfold the robot from its compacted car mode, otherwise you could bend the torso limb joints.

Early 2000's sounds about right. Lol. I remember seeing those during my youth. Unfortunately, like many other cool but not very well known toylines, as soon as they appeared on store shelves they would somehow vanish into the unknown...:-(

Vanish? Pfftt!!! Those Robo wheels sat and sat and sat on pegs around me. Though as a kid on a small allowance and birthday money, this was to my advantage. Only the second series was somewhat hard to find, that is until KB toys got it in stock. The tire-headed humvee robot, race tracks, and jet-to-robot car transports sat on shelves the longest.

Car transports? Were there playsets and different size classes in the second series? If so, dang. Missed that bus. Lol.

Yep. Came in two colors (one good, one evil). Transforms from space shuttle/pane to robot and fires a missile.

These sat, and sat, and sat on my ToysRus store's shelves. They couldn't give the things away. Same with the two track sets. The little cars sold well though.