When Kevin Eastman and Peter Laird set out to create a parody of the ultra gritty landscape of 80's comic books, they probably had little idea that Teenage Mutant Ninja Turtles would become the massive pop culture phenomenon that it still is today. While growing up I found Teenage Mutant Ninja Turtles (or TNMT) to be inescapable. Even disregarding the torrent of action figures, playsets, and vehicles there was a deluge of secondary merchandise in the form of hats, undies, backpacks, candy, party hats napkins, toothpaste, cereal, vitamins, soft drinks, plates, cups, contraceptives, pajamas, pizzas, board games, and just about everything else you could imagine was sold under the TMNT brand name. Some of these things were wonderful while other others where just cheap cash-ins distributed to the boring paper goods isle of every super market. While I have many cherished childhood memories of TMNT there are some things...

Lately I've been sorting out boxes worth of things from my youth. Somewhere inside a bag full of Matchbox Connectables, Incredible Crash Dummies, and other TMNT toys I found this: 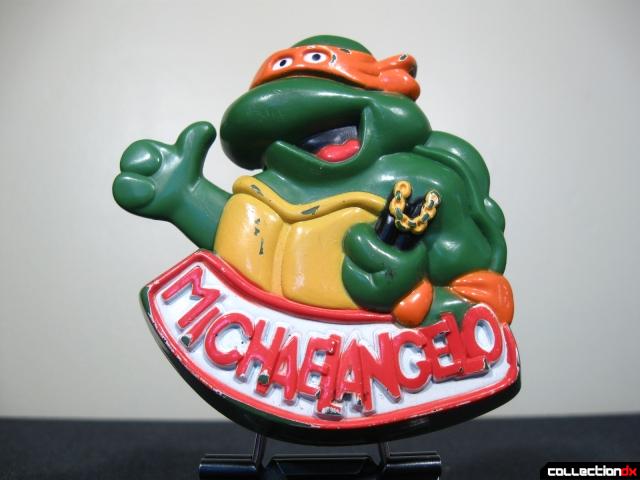 Never look away, son. Not even for a moment.

This small plastic trinket came with every Burger King Kid's Meal back in 1989. Appropriately, it looks like a highway restaurant sign on the side of some silent desert road serving as a monument to America's decadent consumerist culture. It's about the size of a large belt buckle and is made almost entirely out of turtle green plastic. Michelangelo carries his signature nunchucks which are rendered with mushy sculpting and picked out with black paint for the shafts and spotty yellow for the chain. 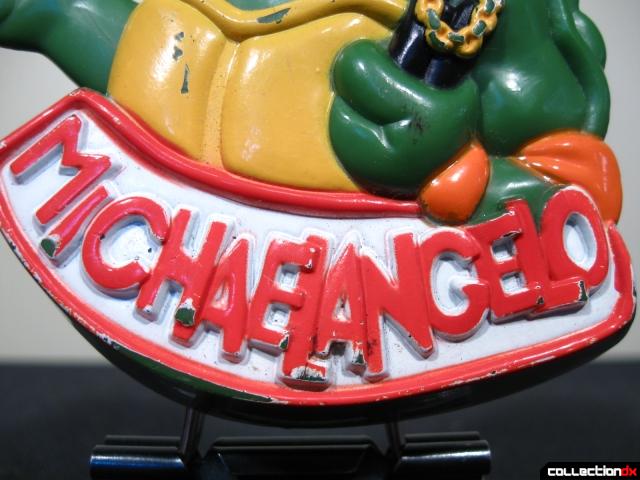 Eastman and Laird originally misspelled Michelangelo's name as Michaelangelo so most of the 80's TMNT merchandise reflects this gaffe. Michelangelo had the unfortunate problem of being a character in a children's show with a really long name. As such, Michelangelo was often shortened to "Mike" or "Mikey" to give the wee ones a better chance at successfully compiling their holiday wishlists. Mikey was the "cool" turtle who was more into partying and scarfing down pizza than taking things seriously. He is often used as the primary audience cipher for rowdy young children and deadbeat stoners. 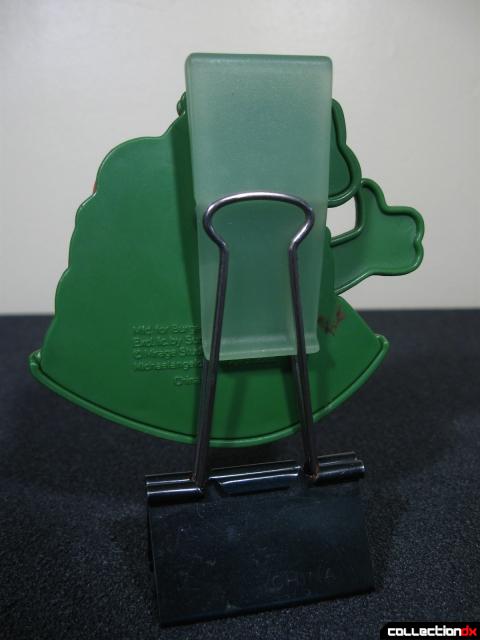 The back of the trinket has a removable plastic clip designed to go on your belt or clothing. One could also fashion a simple chain under the clip so the whole thing could be worn around your neck. Doing so would make you the most radical kid on the playground. 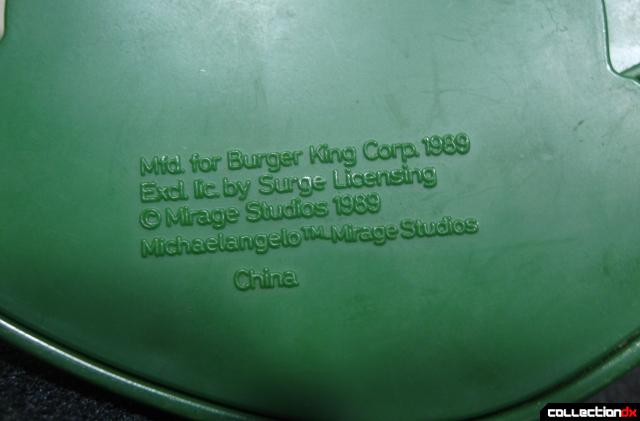 Look at what mankind has wrought...

Just so everyone knows, this product is fully authorized by Mirage Studios via a company called Surge Licensing. Someone had to sign off on this and have it produced in a factory so it could be packaged next to cheap fast food. They awaited innocently enough inside those little house-shaped containers for burgers and fries just aching to be with some unsuspecting child. 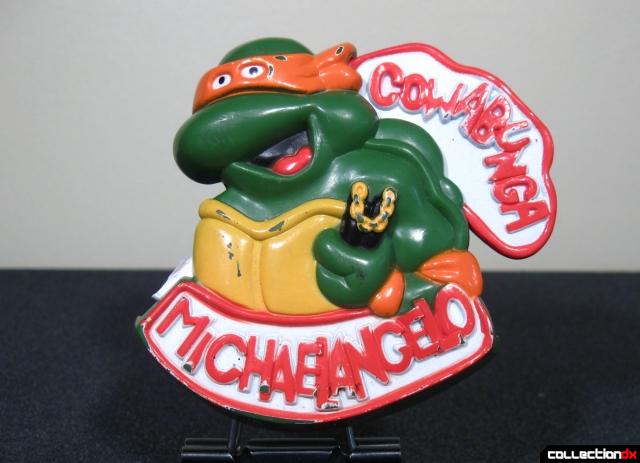 By pushing down on Mikey's friendly thumbs upping hand you can swing out a mangled looking speech bubble with the TMNT catchphrase of "COWABUNGA" embossed on it in blood red letters. Back in the day, nothing was cooler than exchanging jubilant COWABUNGAS among peers. 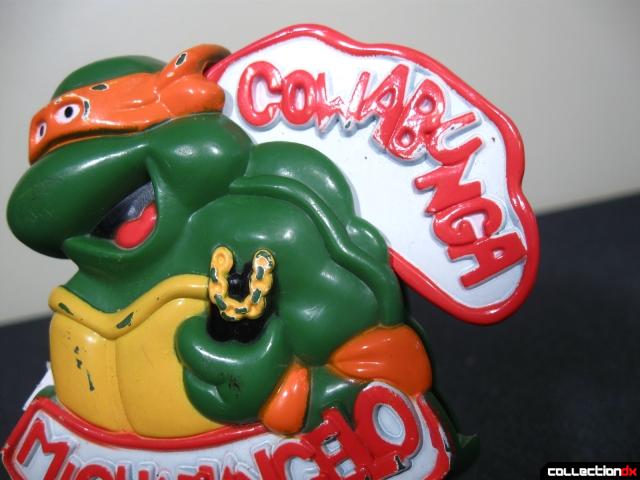 There is something I find oddly fascinating about the details of this little trinket coupled with the small patches of wear on the paint. The ubiquity of TMNT coupled with its state of minor decay make it seem like an object that is both a part of history and also timeless. You could easily imagine this being produced today as a pack in item for some promotion. I don't remember doing much with this thing, just that it existed in some distant corner of my mind. 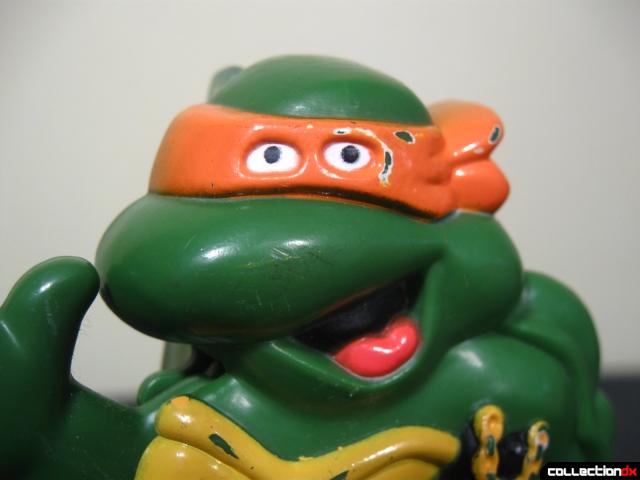 As a child I thought nothing of this trinket's malformed visage. My adult sensibilities cannot help but question this bizarre rendition of a childhood icon. From its eternal toothless smile to the beady little eyes frozen somewhere between joy and abject horror, there is something mildly unsettling about Mikey's expression. It also suffers from being a three-dimensional object that is meant to represent a two-dimensional image so from the side it starts to look... 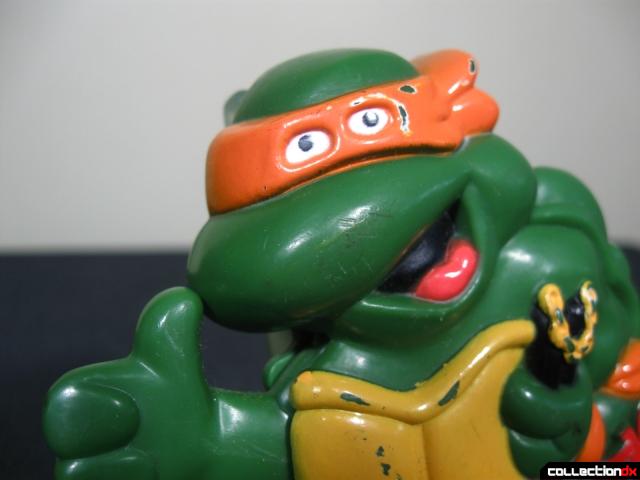 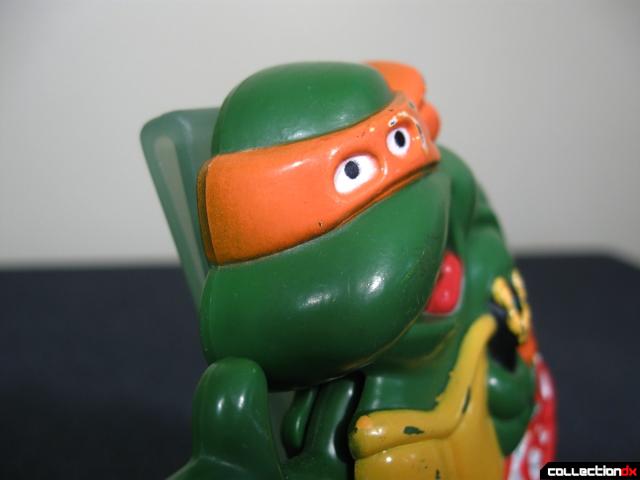 In the end, this Michaelangelo trinket serves as a small tribute to how merchandising permeates our modern society. It is a smiling reminder to the bodacious beast that can not be fed. Forever we shall know the frightening face of our popular culture.

After writing this review, I feel like we all should try to rest and forget about the trials of modern day society. 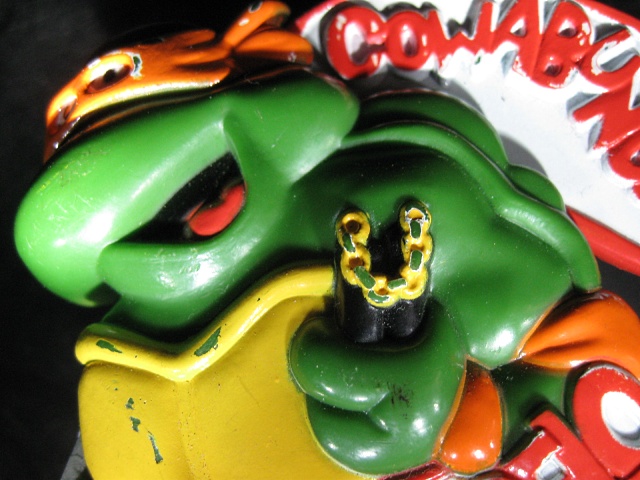 12 comments posted
OH DEAR GOD. WHAT HAVE YOU

OH DEAR GOD. WHAT HAVE YOU DONE?!

Great review of something so trivial, great job. Sure wish I still had mine.

The only thing missing from this review is the obligatory slow zoom on the toy's creepy eyes.

Why is this thing even here? XP

because it's a classic toy and part of our shared cultural history? it's extremely important that we preserve this for future generations.

Personally, I don't know if this even falls under the classification of a toy. If it doesn't involve any fiddling around or interaction, then its just a hood ornament.

if it comes free with a kids' meal, then it's a toy.

Man, what is it with creepy Michelangelo recently? I was reviewing the most recent figure and comparing him to the last movie Mike and...well, I swear the recent movie Mike figure wasn't THAT creepy when I originally brought him.

It's at the end of the review, here:
http://toysandtomfoolery.blogspot.com/2012/08/nick-tmnt-party-dude-abides.html

Anyway, MAN it's amazing how a little time will completely change something. I seem to remember that thing and I could have sworn it looked less....melty-faced.

Had the Raph one,I think it had a suction cup. And I LOVED it. You cannot even begin to comprehend how much I loved the hell out of anything TMNT. I was at that perfect age where I was old enough to really get into the franchise,get the jokes,read the B&W comics but yet still appreciate the cartoon-but not TOO old. I ate this stuff up.

Have to disagree about the "timeless" part,though. If this came out today it would say "Boyakasha" instead of "Cowabunga."