We all know Megatron, but which Megatron is your favorite? As a guy who was around for the G1 days, for me, the original Gun Megatron is the only way to go. Since then he's been a tank, a jet, a helicopter, a dragon and a few different trucks. And then there were the movie versions, which switched from one incoherent mess to another. But the one alt-mode from the movies I dug was from the second live action movie - Dark of the Moon. In the beginning of that one he was disguised as a Mac Truck. His robot mode reminded me of a desert nomad, with a cloak covering his head.

This is the Megatron that was chosen for the 34th entry into the Studio Series lineup.

It's got some issues.

Get your Studio Series Megatron at Fun.com 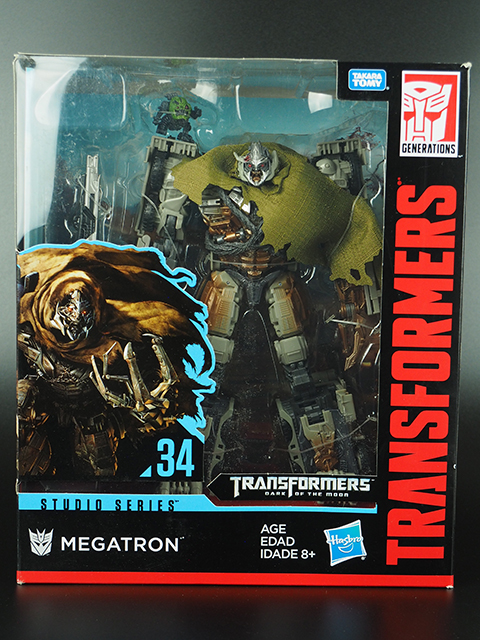 Megatron comes in a lovely box. The studio series packaging reflects the higher-end styling, and features a front window, and the inner tray liner becomes a backdrop if you want it to. There's about a million little plastic ties to clip, so get those scissors ready. 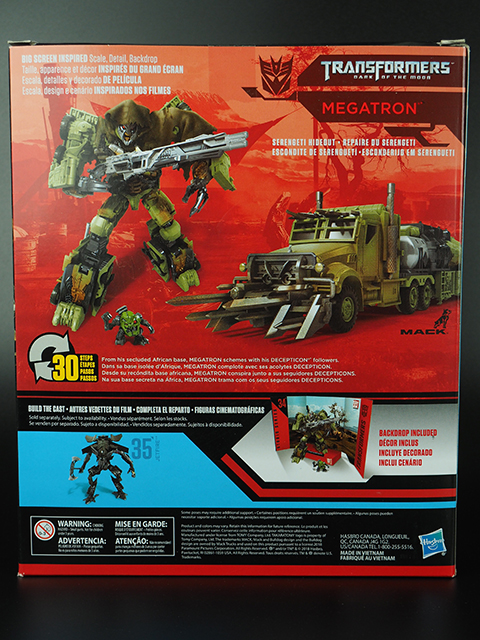 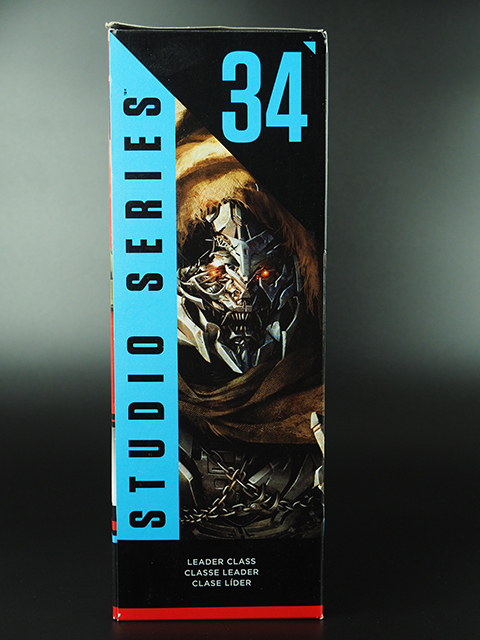 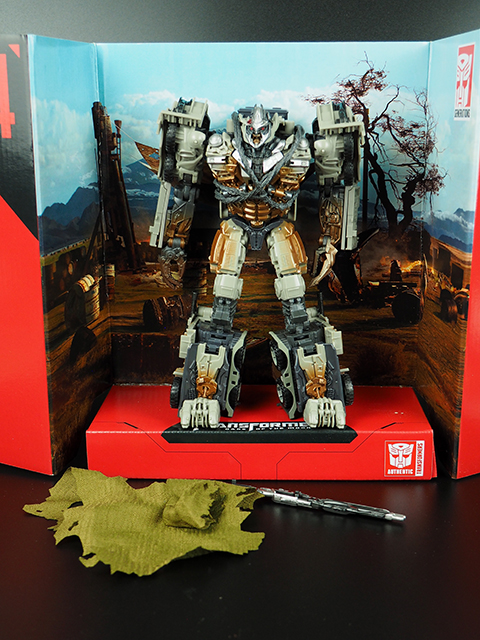 What immediately drew me to Megatron was the cloth cowl. I am a sucker for mixed media on my toys. 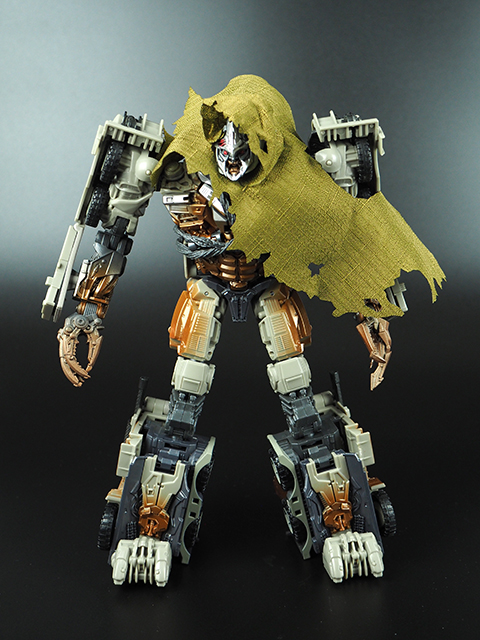 As a leader class, Megatron stands about 8" tall. He looks really good in a standing pose, but he does not have a lot of success in more dynamic poses. While there are a lot of joints, Megatron has to maintain a hunched-over stance to remain upright. While some of this is the character design, it's mostly due to the intricacy of the transformation. 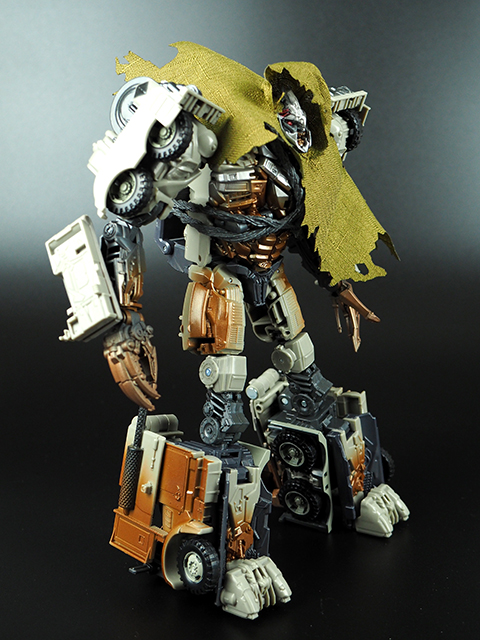 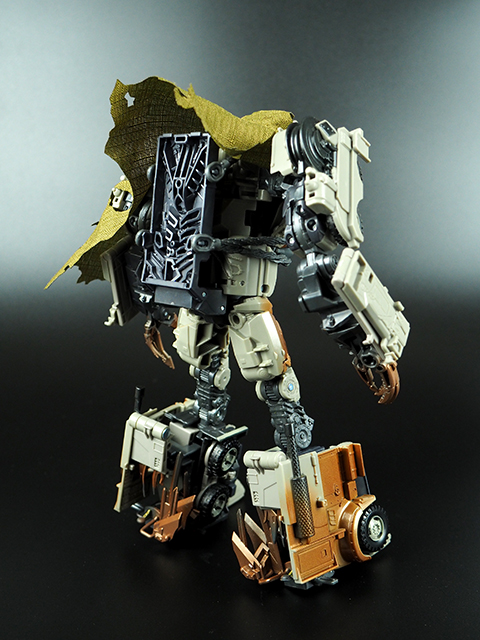 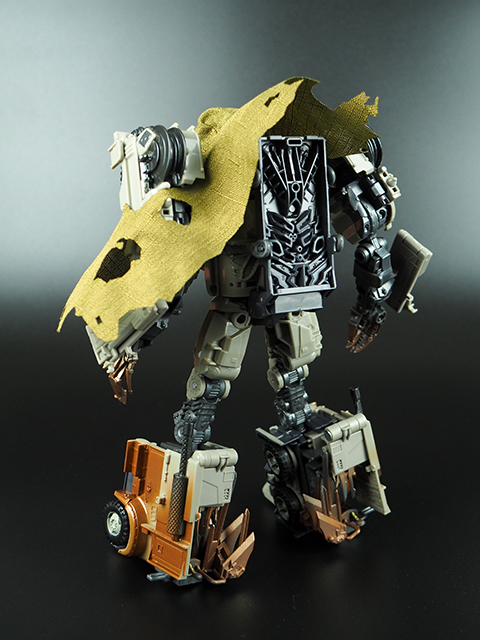 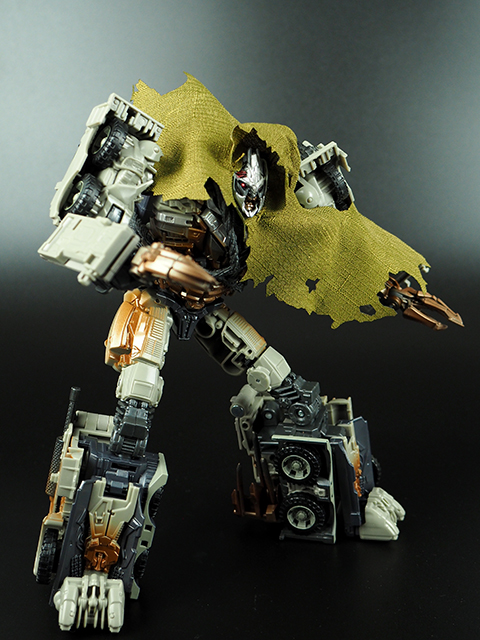 You can do some basic poses, but there will be no "superhero landing" poses going on here. 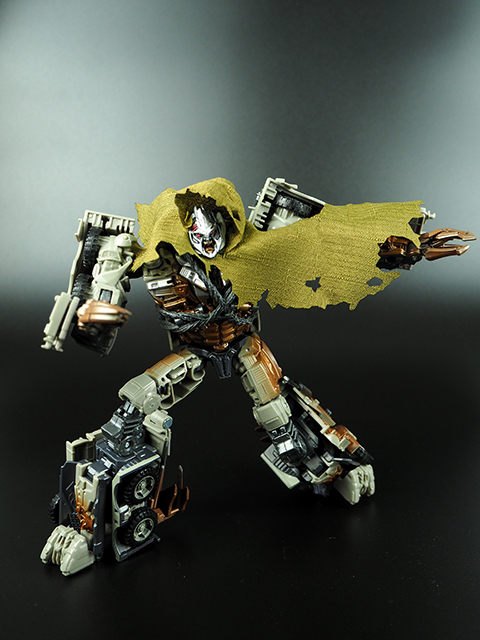 With the cowl removed, you can get a better look at the figure beneath. The paint detail and sculpting are fantastic. The wrapped wires on the chest are made of a softer plastic than the rest. 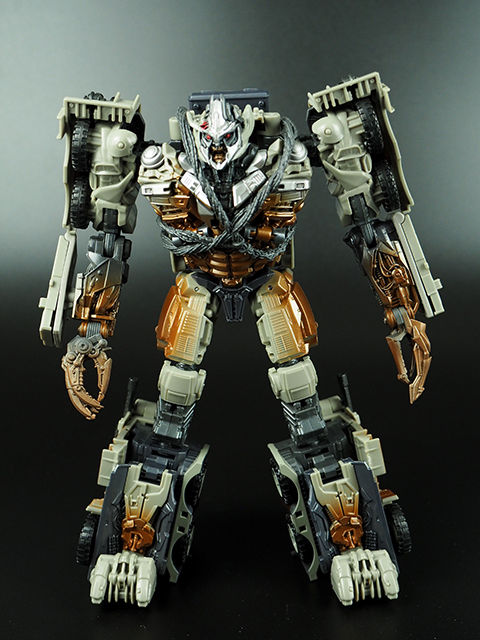 Included is a small figure of Igor who can be positioned on the pegs on his shoulder. The fit is super tight though, and I actually popped one of Igor's arms off trying to get him to stay. 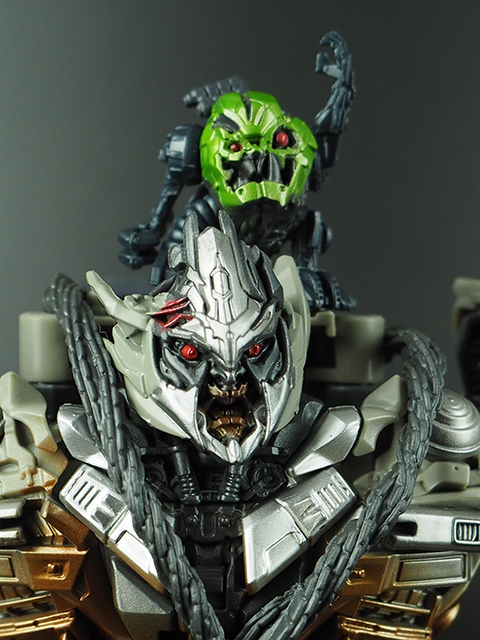 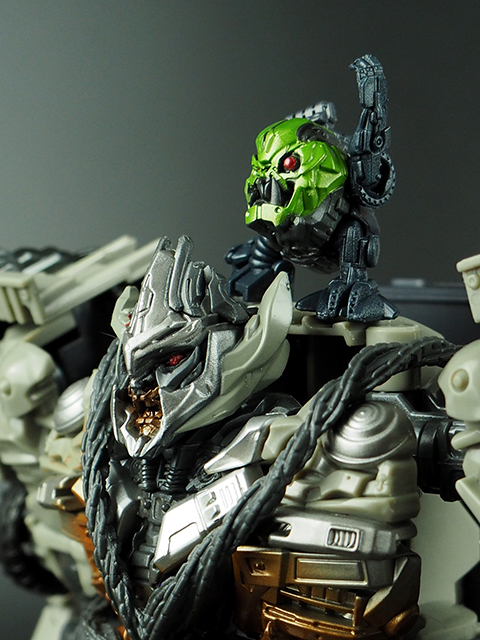 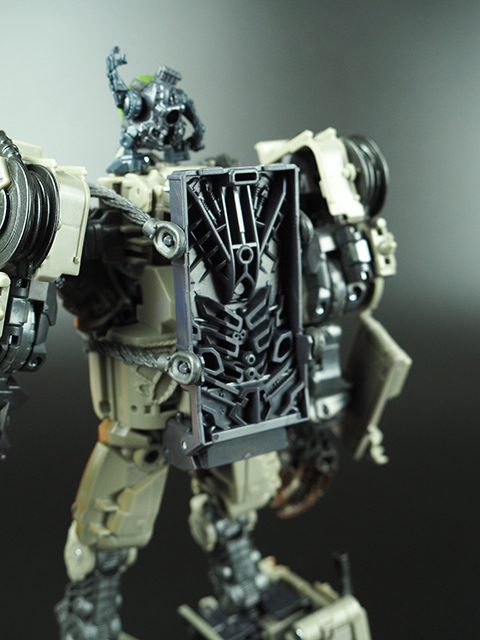 A gun is included that can fit into Megatron's right claw. The claws are softer rubber (for safety) and have a peg shaped indent for it to securely attach to. 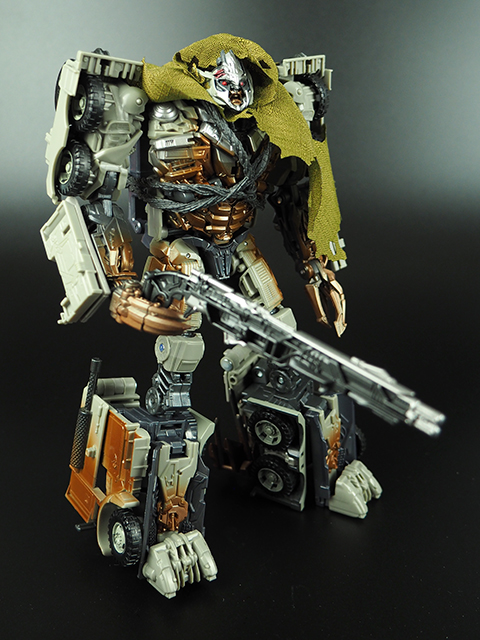 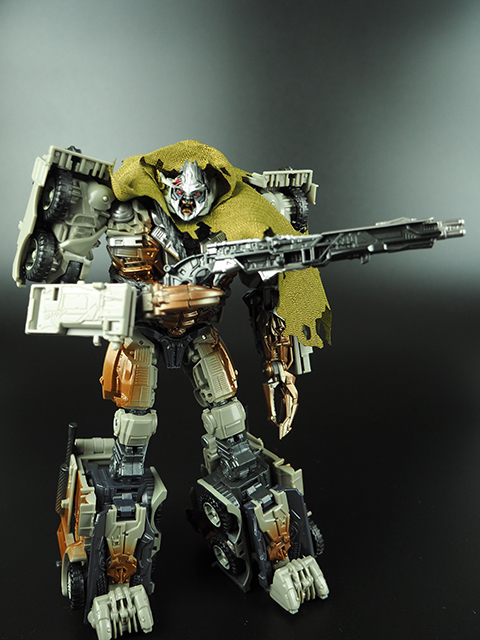 The transformation... kind of sucks. It's a 30 step transformation that turns into a 100 step transformation trying to pop back the things that popped out. The basics of the transformation is the feet unfold to become the cab of the truck. There's a connector in there that does not want to stay connected.  On the underside, the chest flips up and the arms tuck in along the underside in a very cramped forced way, meaning nothing ever lines up right underneath. The panels on the side of the arms become panels along the side of the truck, but those have weak tabs that don't like to stay in place. Finally, once you are done there really isn't enough clearance at the bottom for the body parts to not scrape along the bottom. 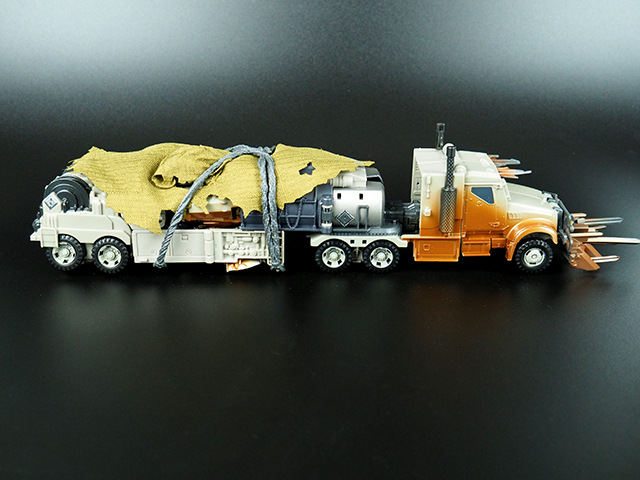 See how you can see the chest parts poking out from underneath? I do like how the cowl covers much of the exposed robot bits, and is held down by the wires that go across his chest. 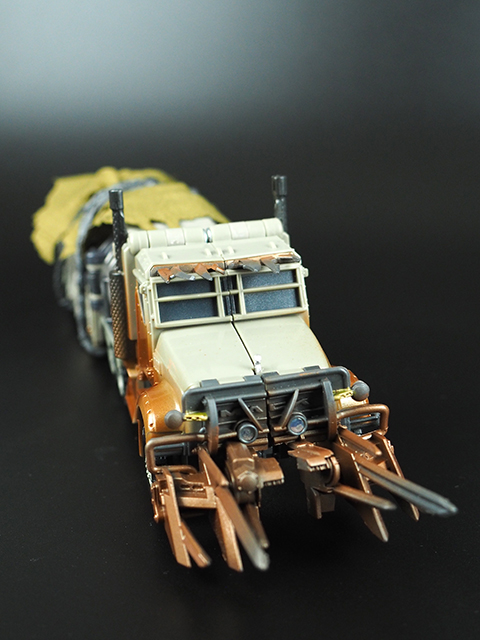 The front spikes are soft rubber, so nobody loses an eye. 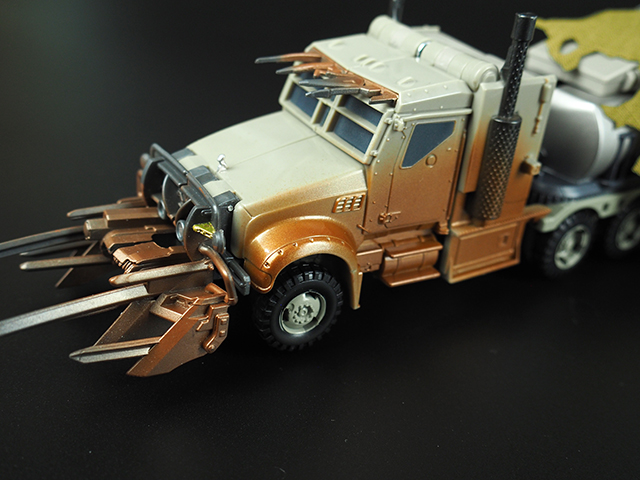 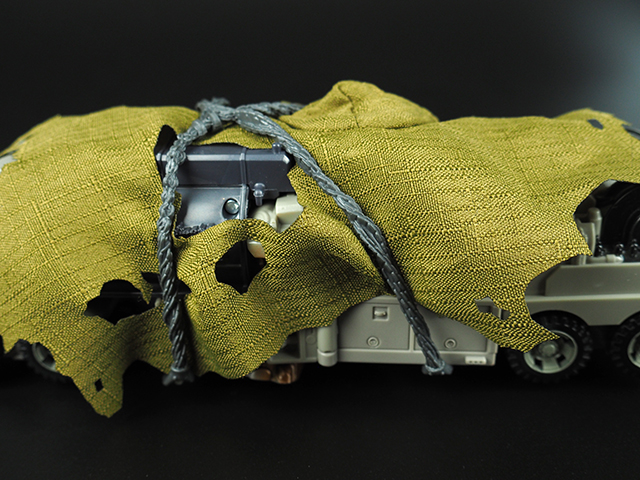 Apparently the truck is a real, licensed Mack Granite military truck. The Mack Granite is a heavy duty truck that is flexible enough to be used in different configurations. 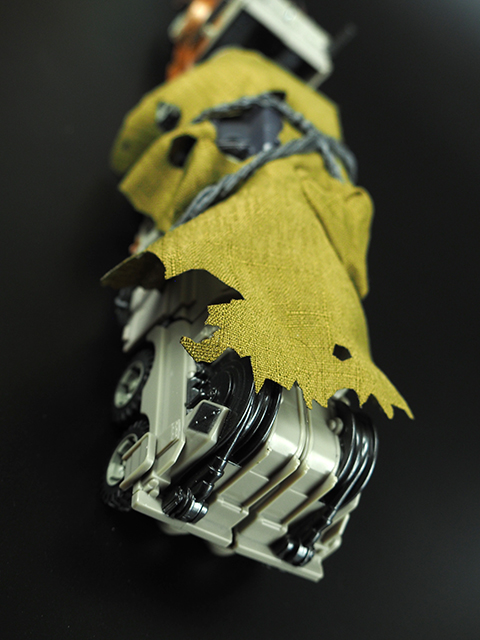 There are pegs on the back where Igor can stand, but I've covered them up here. 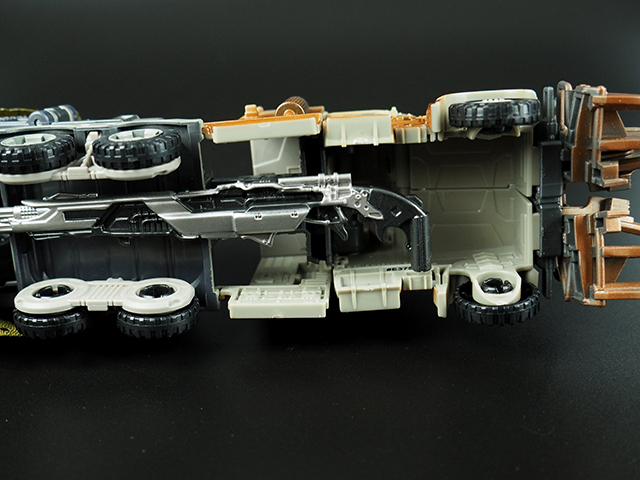 The gun stores underneath, and you can see the whole empty shell that is left after transformation. Adapting the movieverse look to toy form and have it look great in both modes is difficult to do. While they look great on screen, they often don't make for a logical transformation. So while this is a pain to transform, I can give the movieverse toys somewhat of a pass in that regard. The fact that it looks good at all in both modes is a miracle. 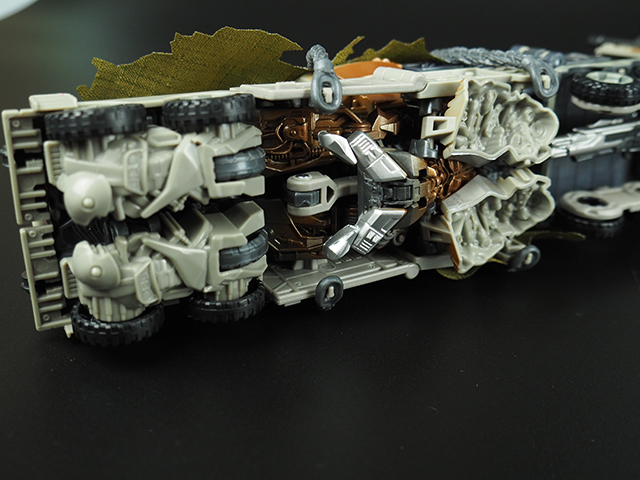 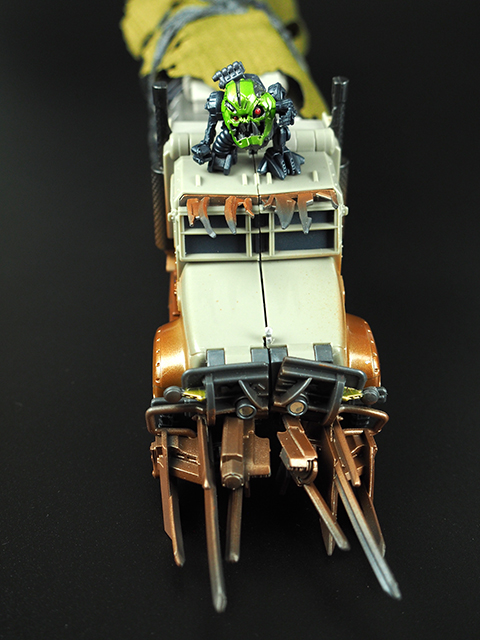 If you are up for the challenge, you can get your Studio Series Megatron at Fun.com