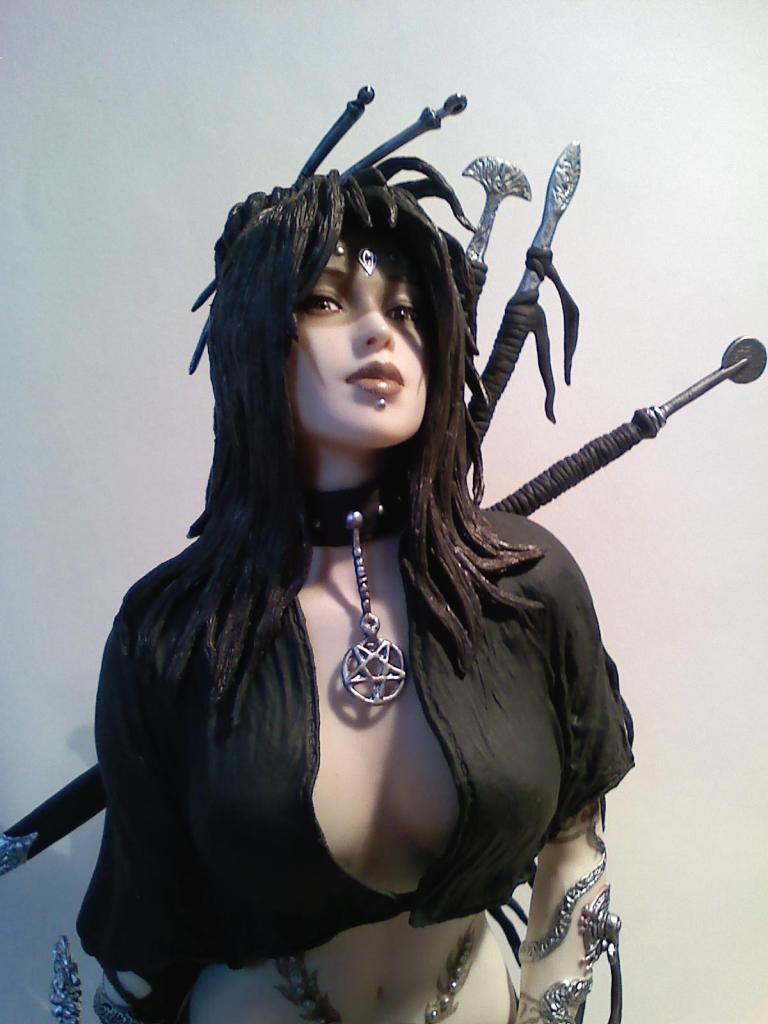 With so many figures coming out in this day and age, it's hard to keep track of them anymore. All of them are so similar in quality and style that it's tough to pick out which ones that really stand out, that really pop and catch my eye when I'm browsing pictures. However I think that Yamato managed to pull it off with their Fantasy Figure line, and especially with this new figure, Medusa's Gaze. 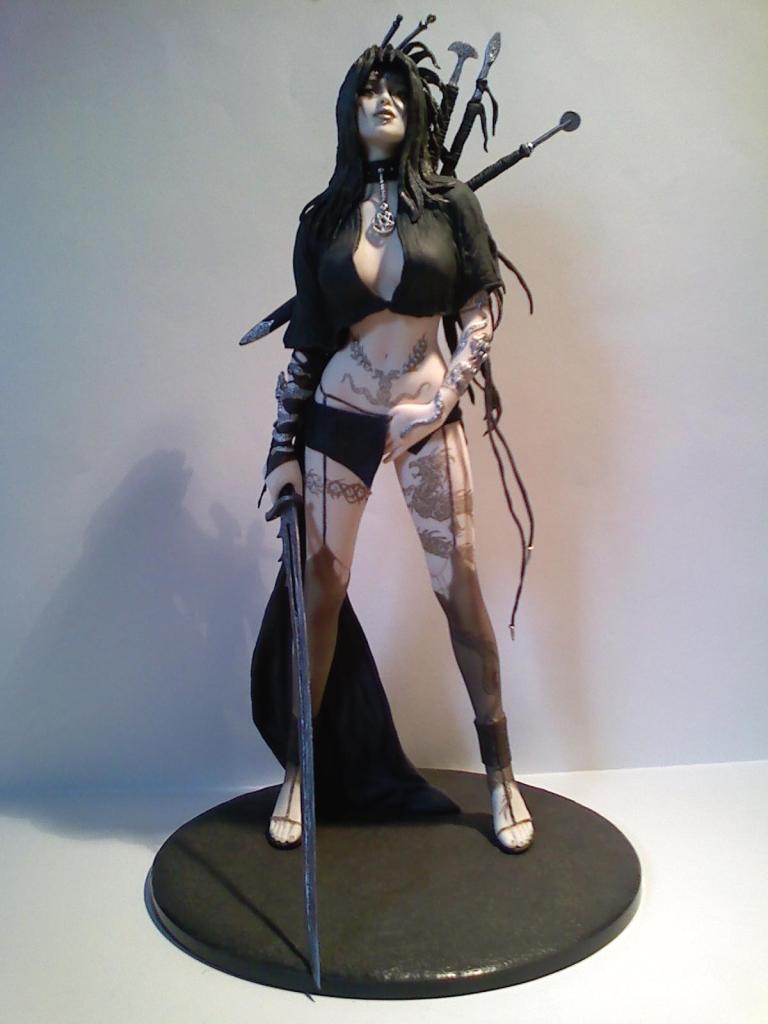 Medusa's Gaze was originally an art piece by Luis Royo, who has published several art books among other media as well. The Fantasy Figure Gallery set seems to focus more on prolific artists instead of popular anime characters and it's a refreshing change of pace in both style and execution. 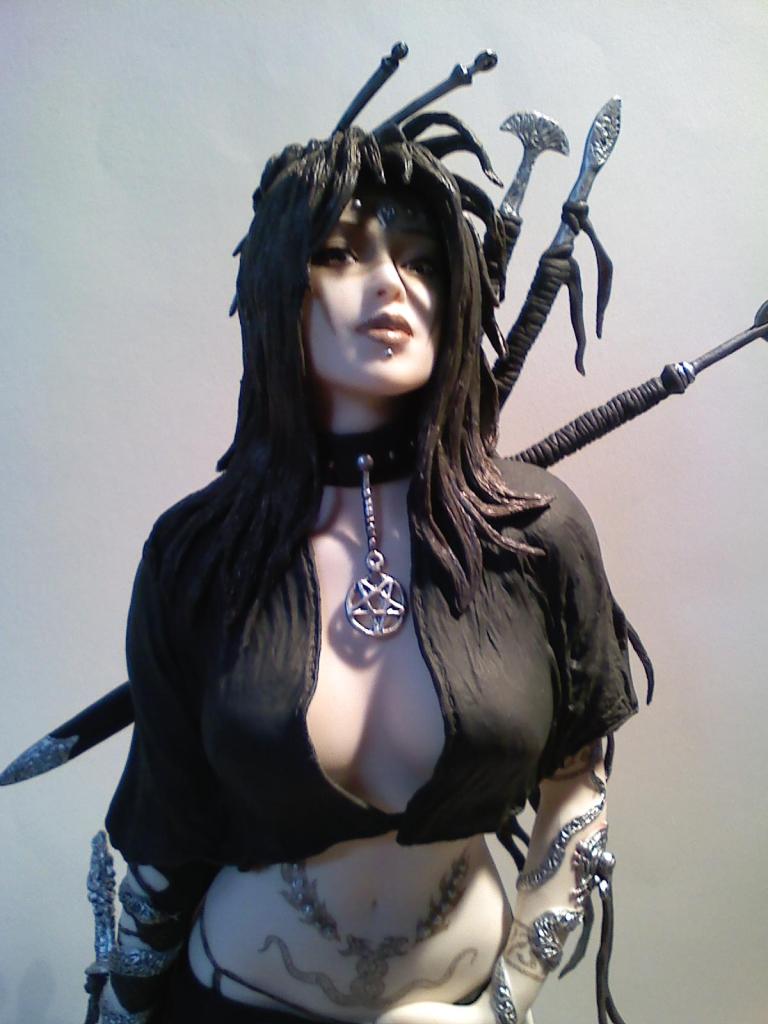 The most noticeable feature of Medusa is her size. This figure is absolutely huge standing just a little short of a full 12 inches. Medusa quite literally towers over every piece that I own. When compared with the original art piece, Medusa's complexion seems less gritty. However the skin tone is still off enough that the same eerie aura is given off about her. 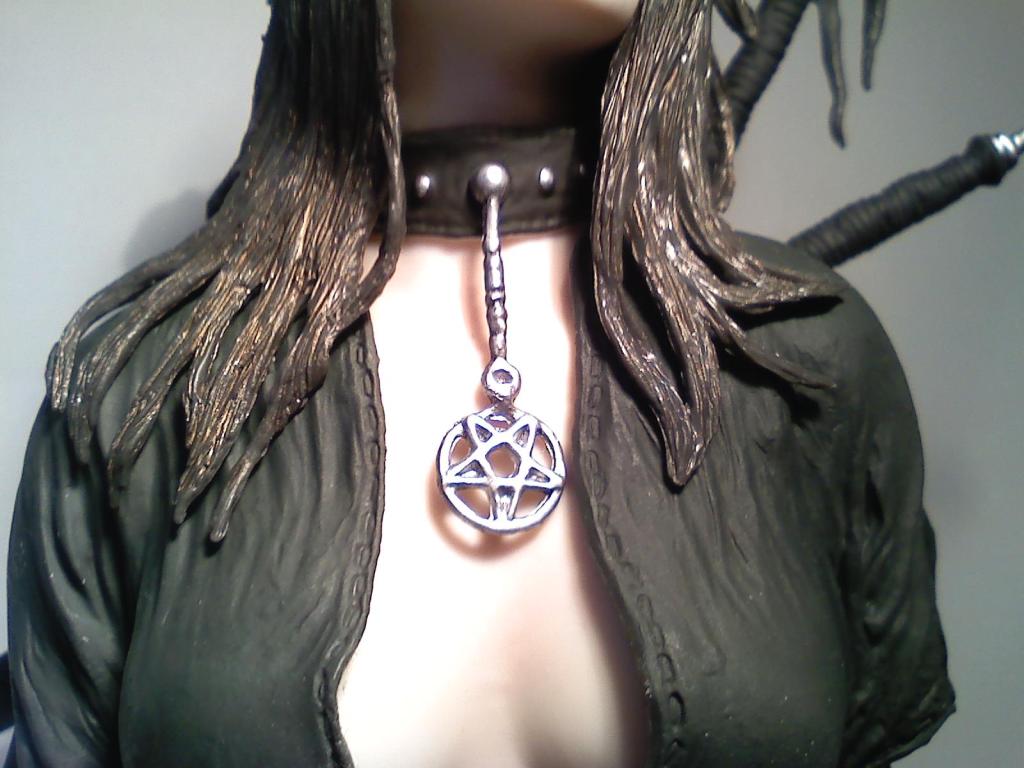 All of the cloth on this figure is a separate piece from the actual body. It's make out of a slightly softer plastic with a bit of give to it. The textures on the clothing are done nicely to make it seem like there's a bit of wrinkle and wear to the cloth. 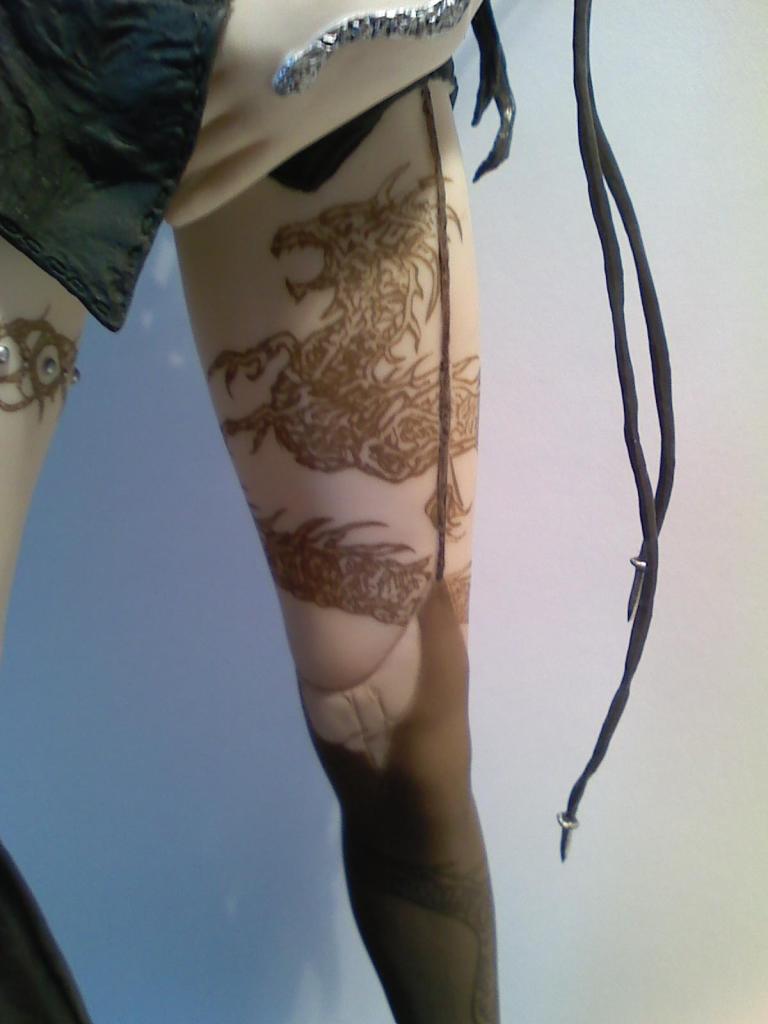 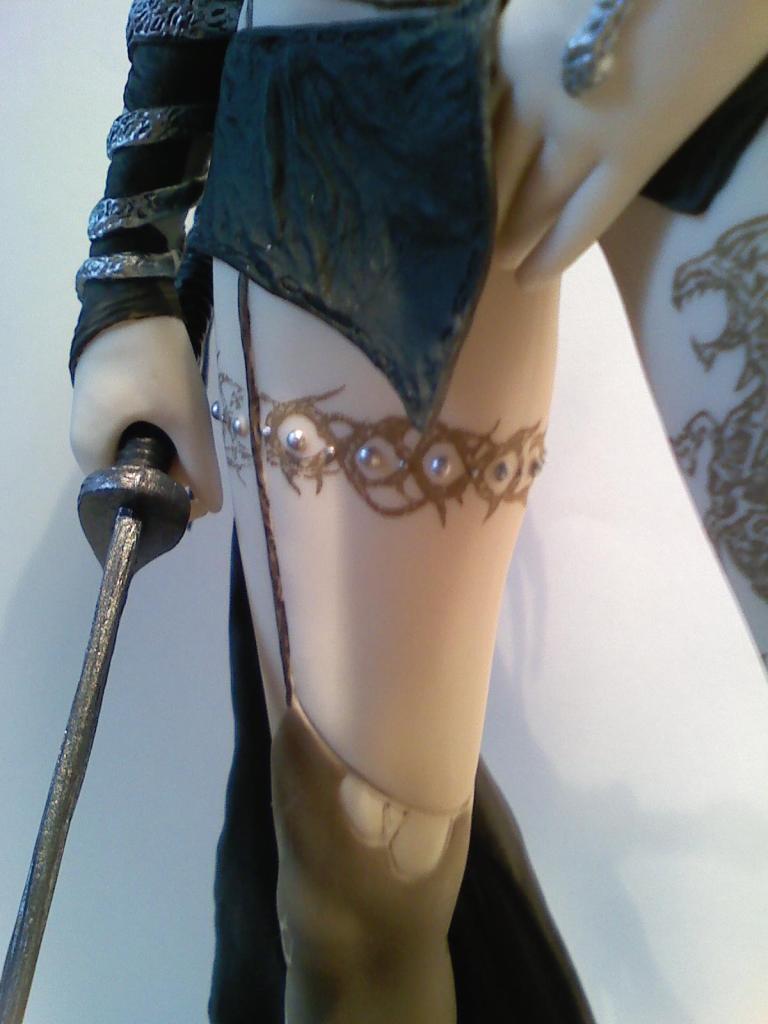 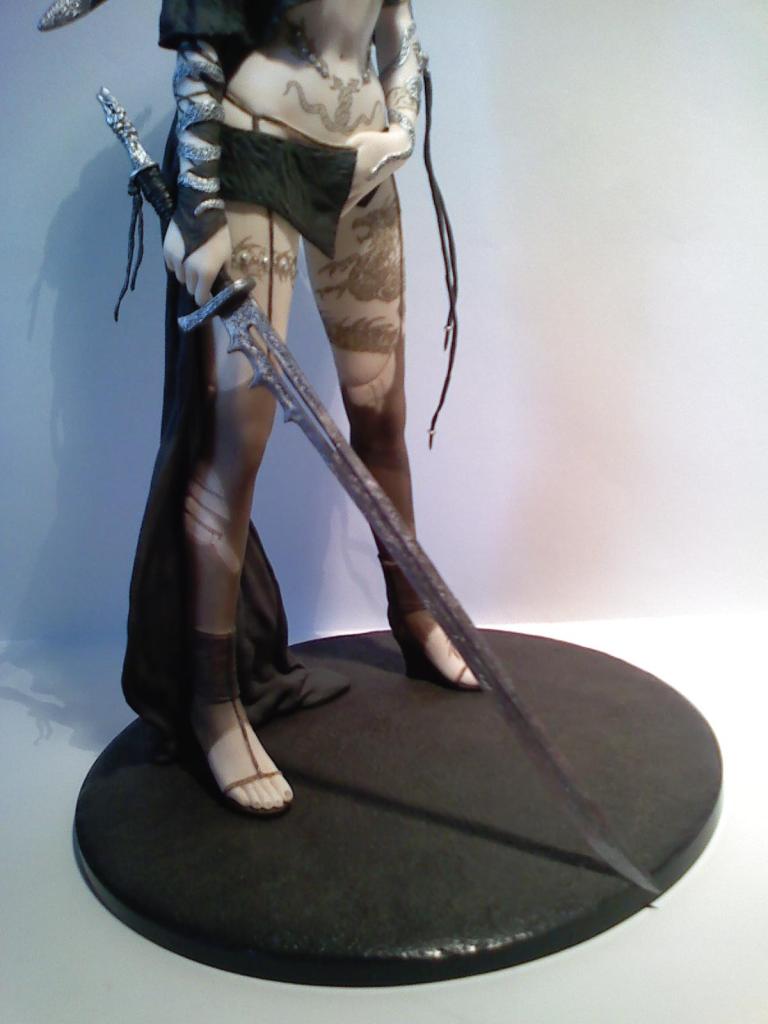 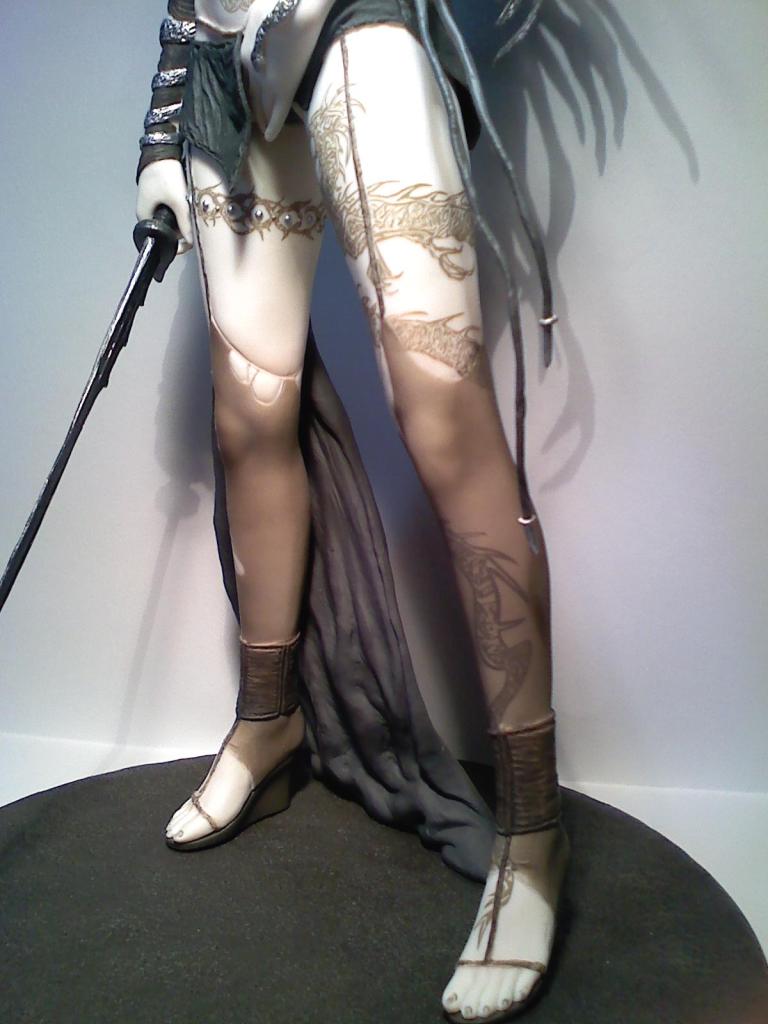 The leg sections are very pleasant to the eyes. The details around the thighs with the tattoos are very well down as they spiral up along her legs. The tattoo on her left leg can still be seen through the pantyhose slightly in a nice effect. 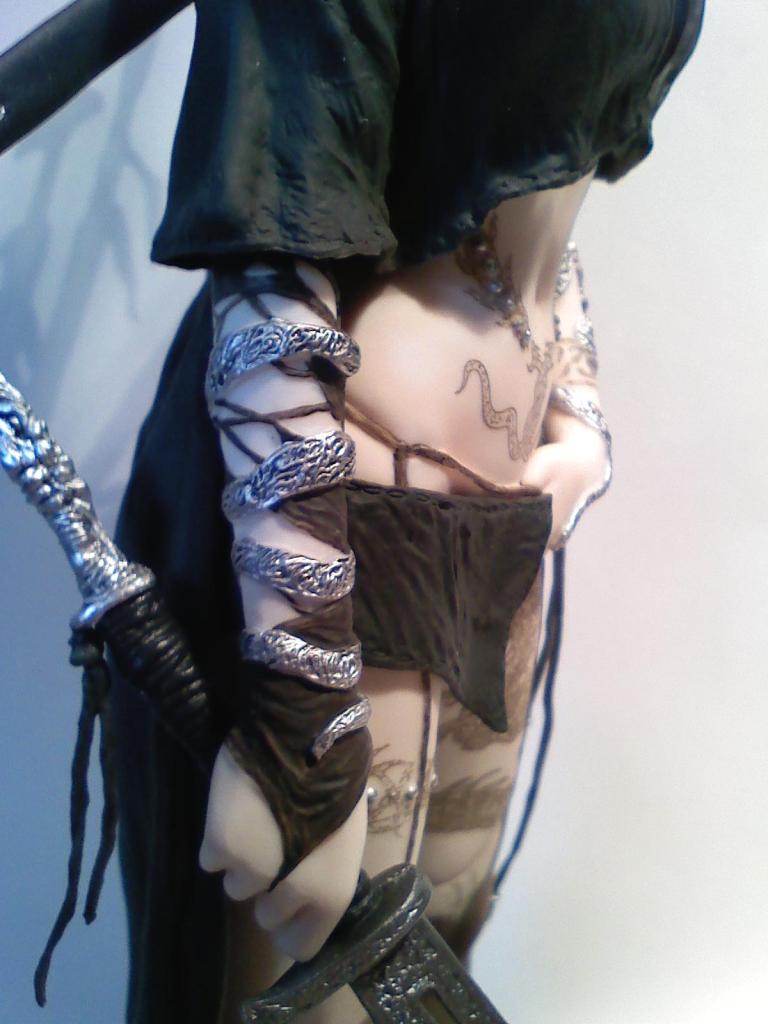 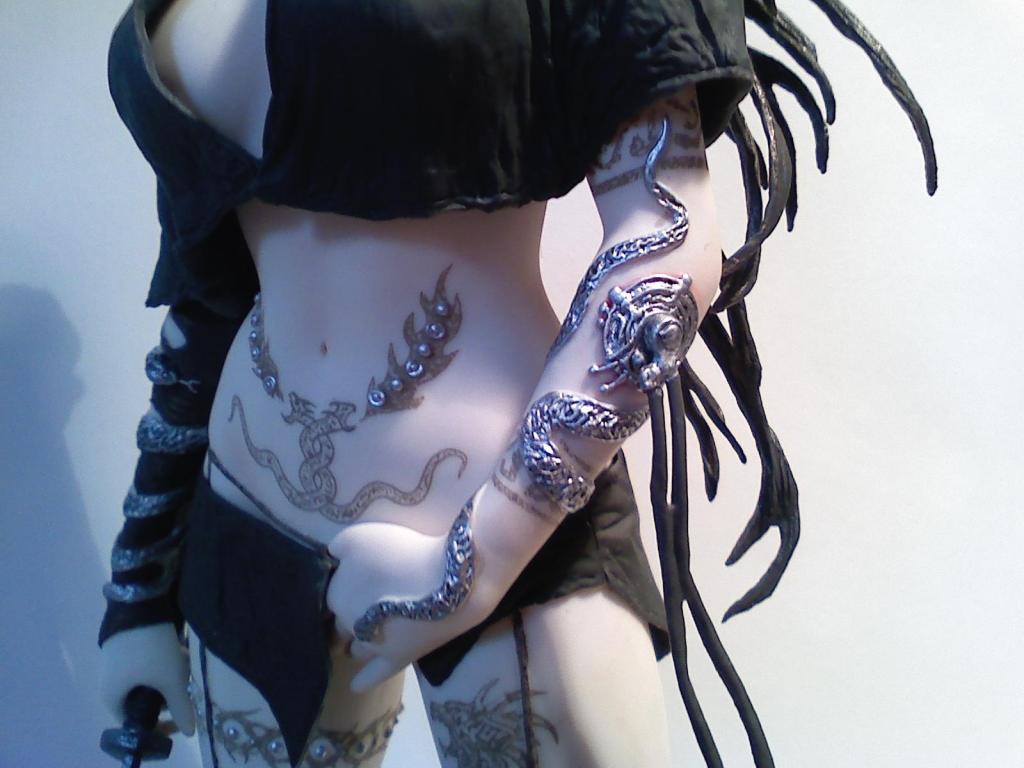 One thing to mention are the myriad of piercings that cover this figure. All of them are small separate studs that cover much of her body, along her leg, arms, naval, and face as well. Some of these look particularly painful and make me wince a bit, especially the ones on her left arm which seem to be outlined with red as if an infection may be growing. This only help to convey just how extreme this character is.

My favorite part of this figure is the midsection. The tattoo of two dragons entwined breathing fire, with even more piercings lining the flames is simply gorgeous, and the additional silver serpents lining her arms only help to make that section pop even more to the eyes. 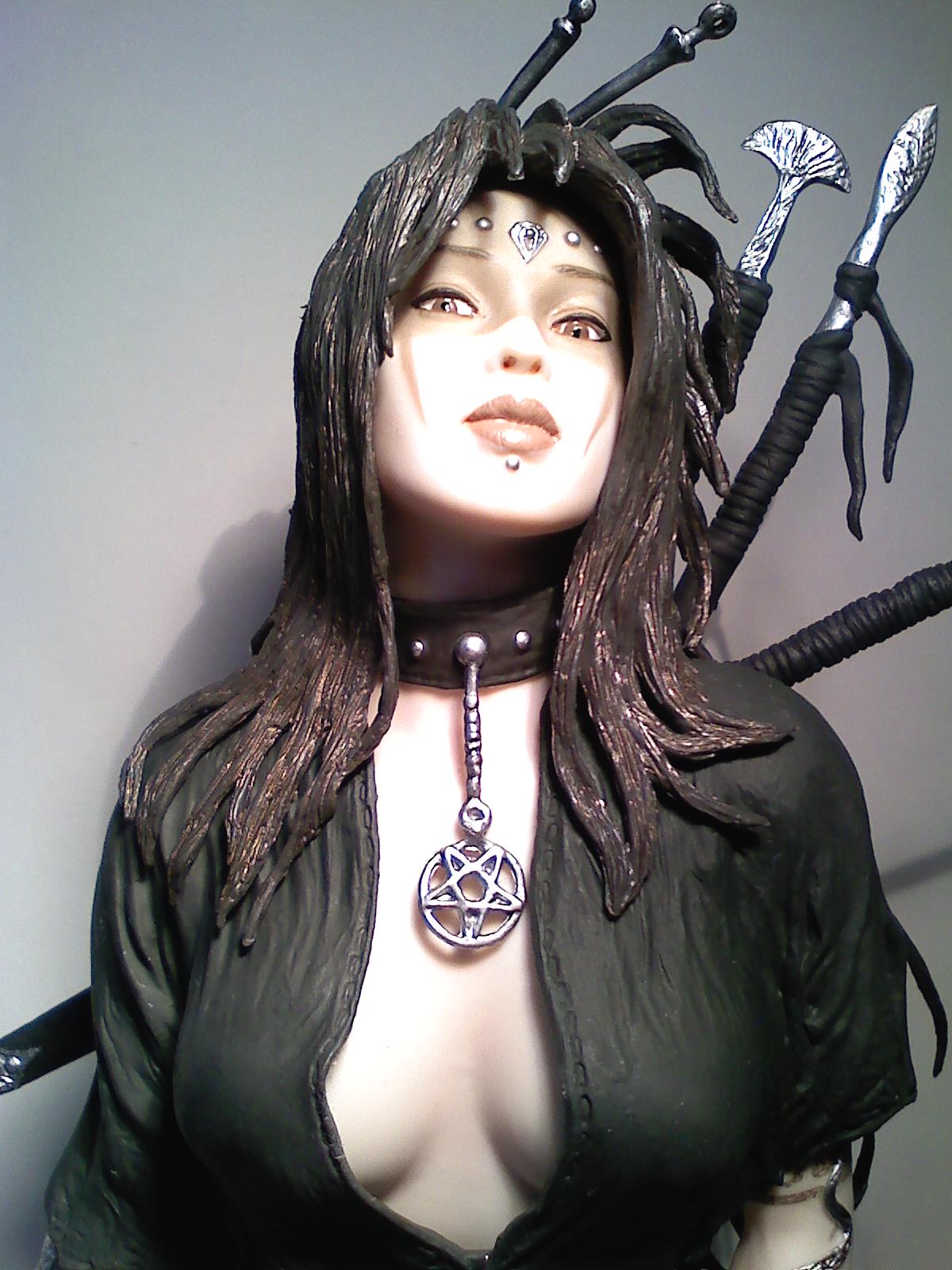 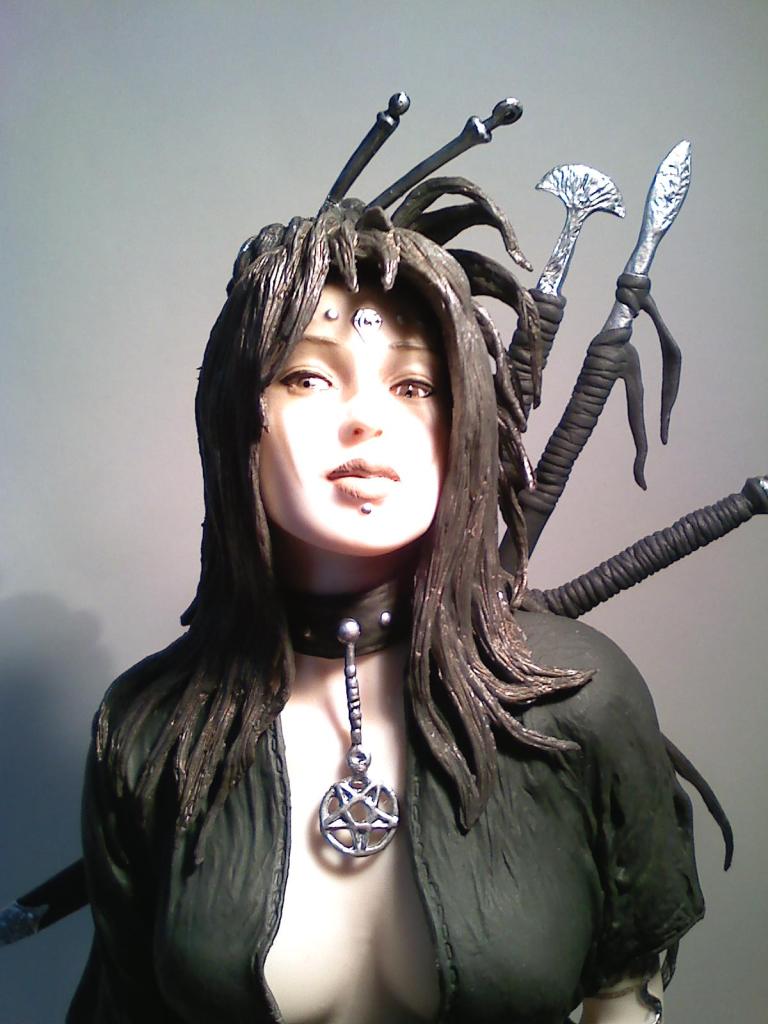 Medusa's face is something to truly behold. Although there isn't too much detail in terms of blush or texture, the dead-cold gaze that she gives makes her truly terrifying. The hair is sculpted with separate strands, making her seem all the more gritty. 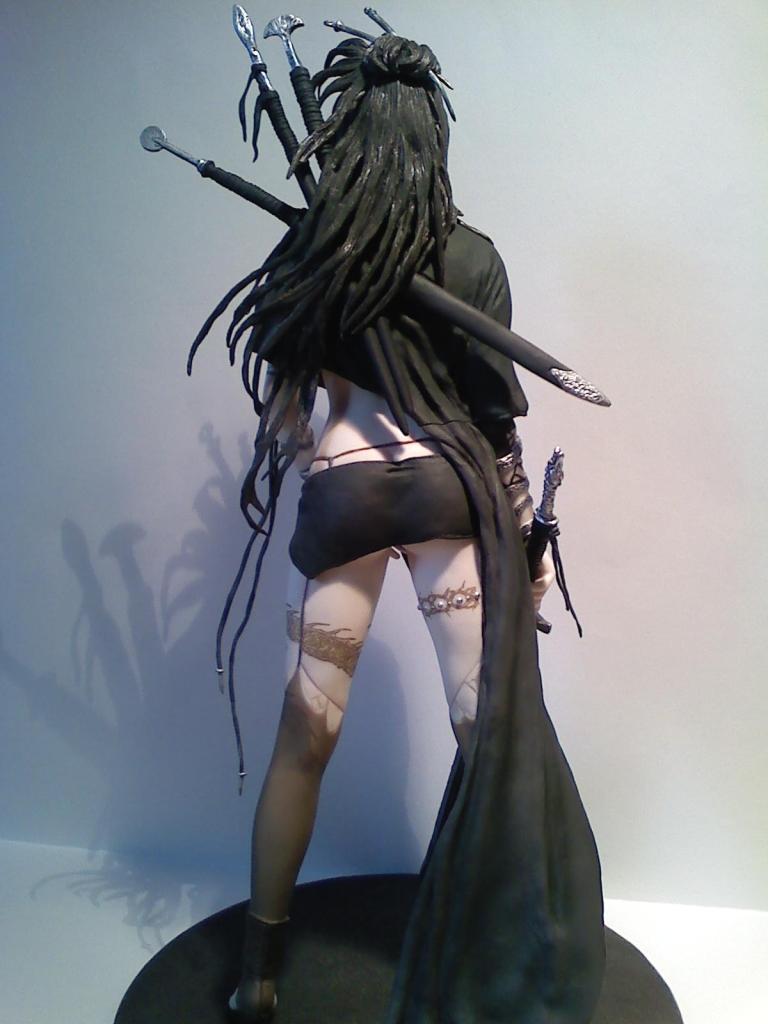 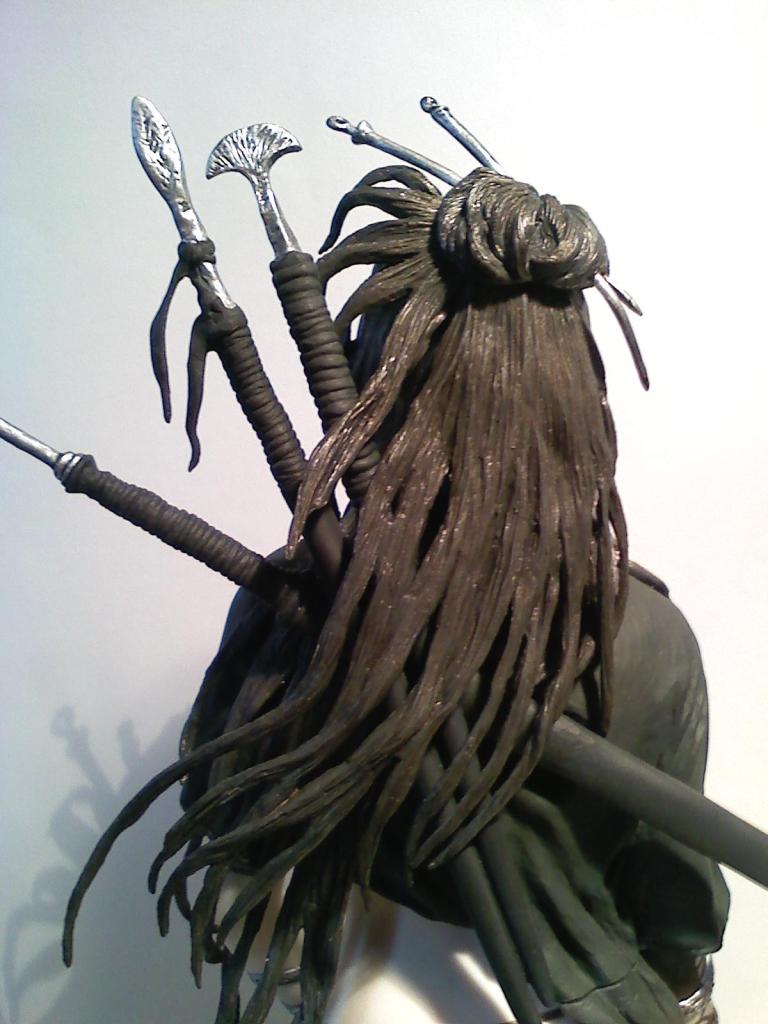 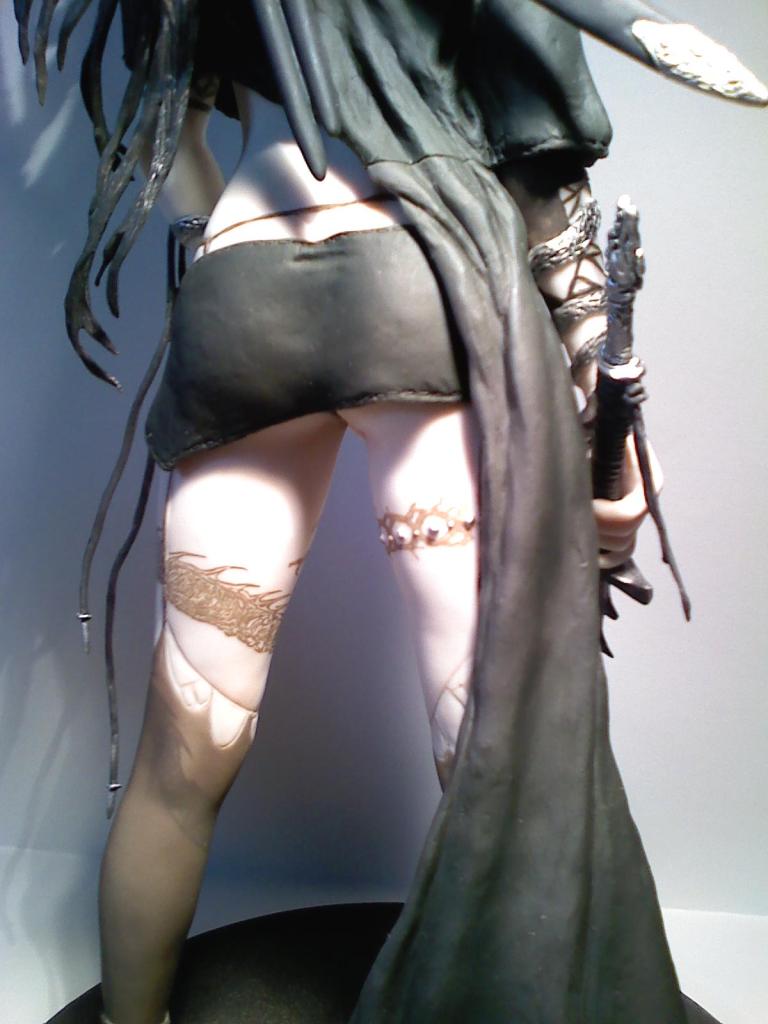 From the back Medusa is a bit more plain. Her hair is sculpted to be blowing in a slightly in the wind. There's a number of other weapons on her back as well. Although slightly small, the sculpt around her butt is there and all attention is still paid. One concern I have is the bit of fabric that curls around her right leg. It's incredibly heavy on the figure and pegs in on the bottom. I'm worried this part may snap off at some point in the future.

Medusa's Gaze is an incredible piece that is a spectacle on the eyes. However late at night when I look over at her the lamp I have makes her gaze even more terrifying, making me worry that at any moment she would be ready to take me life without a second thought. If a figure is capable of doing that, it must be good. Considering that this figure has no real origin or back story, the fact that it is so full of character and style makes it such a great piece.