I think I'm about done with my little SD/Chibi fever of not too long ago as my tastes seem to be changing in my collecting but when I saw this available, I knew I had to snatch it to go along with the smaller PVC Kids Logic figures I had already bought long ago. This is the combined Devastator version as opposed to the separate 6 figures available of the Constructicons. It comes in a high quality flip cover box. 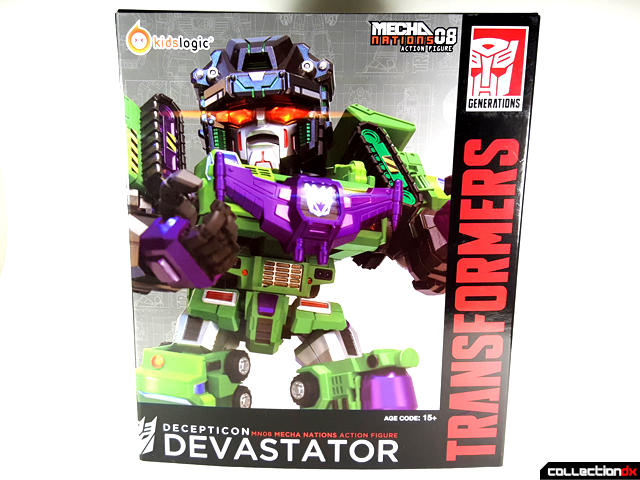 The figure is nestled securely in a plastic clamshell with some protective plastic sheets. Once freed from its tray, this is what you get. A surprisingly beautiful stylized rendition of Devastator! 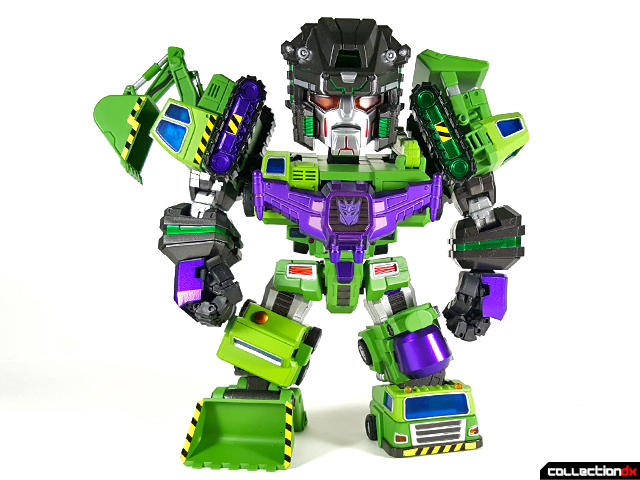 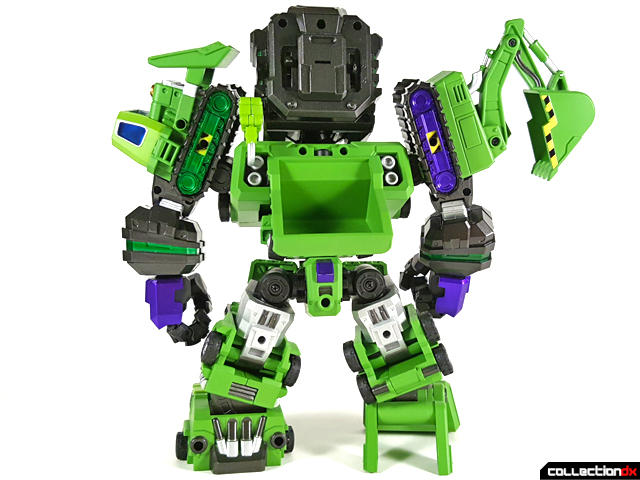 I have to say that I was expecting a very PVC-ish figure along the lines of their smaller figures but this figure is made up of some very solid feeling plastics. Not quite in the same vein as the bigger figures they have released, but a more chunky feeling plastic. Can't quite describe it.

The paint apps are well applied and don't look rushed. The figure was designed and finished with care. The greens are a matte finish while the purples really pop. Most likely a candy purple paint was applied over a very metallic silver to achieve this color. If you are familiar with other Mecha Nations figures, you will know what I'm talking about. They have the paint thing down to a science. The face sculpt is also pleasing to the eyes. 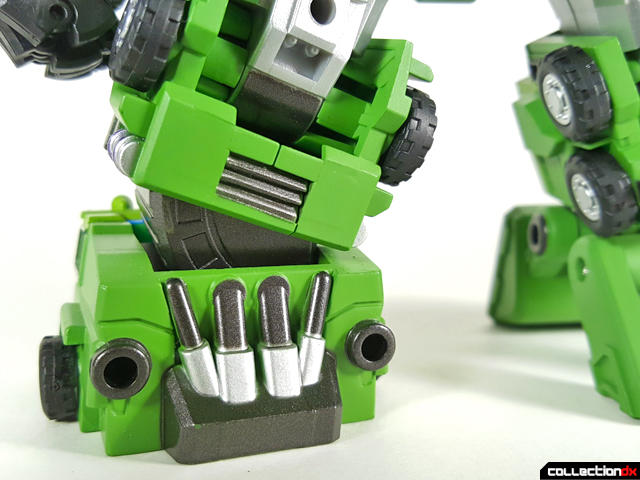 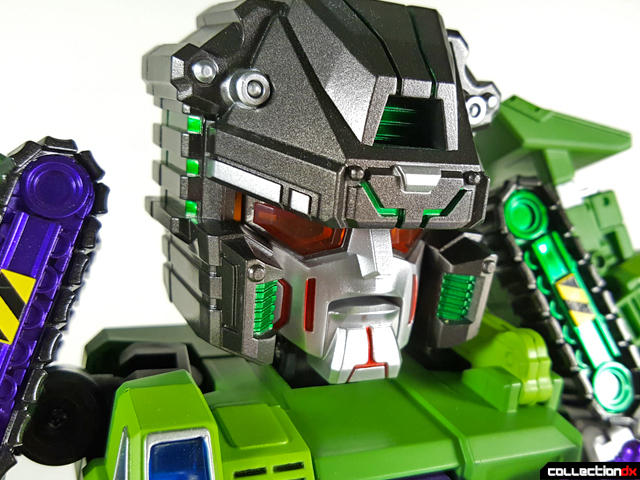 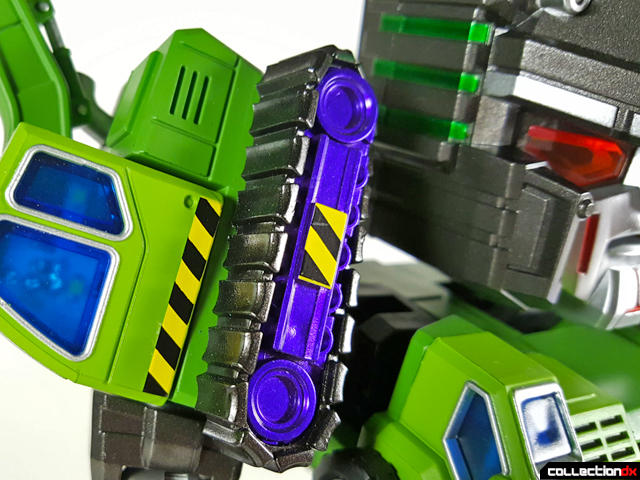 I especially love the wings on the chest. I've always thought this was a great detail on this design. The great purple paint and molded Decepticon faction logo really makes it stand out. 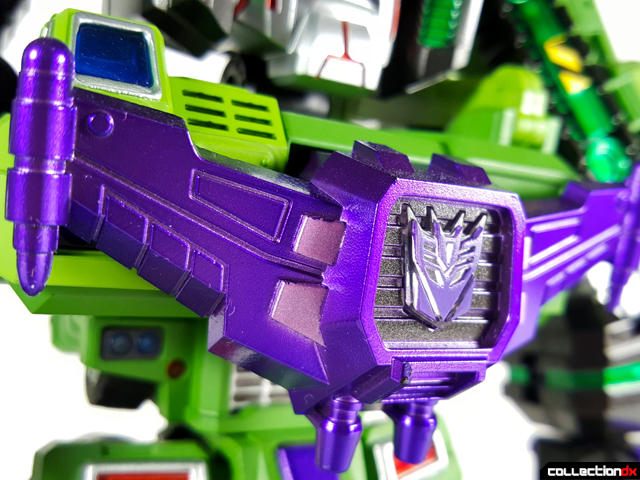 A very welcome addition which I feel is a tad overkill on this type of figure are the hands. Again a very welcome addition but I am very surprised it was done for this figure. If it came with a couple of hand variants I would be ok, but these are extremely poseable! Every joint moves! I almost wish these hands were available by themselves in different sizes for custom projects. 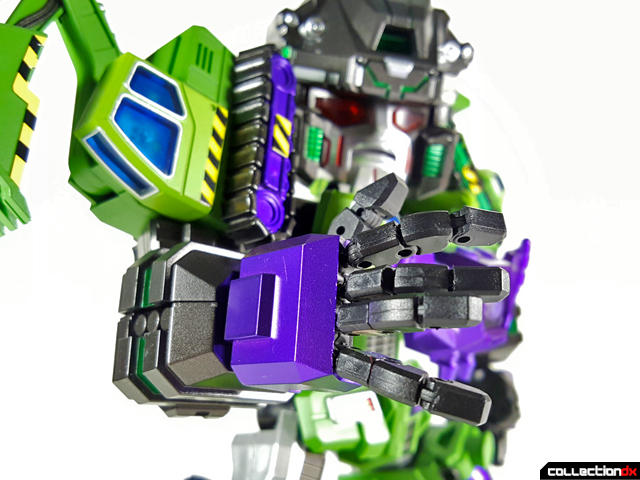 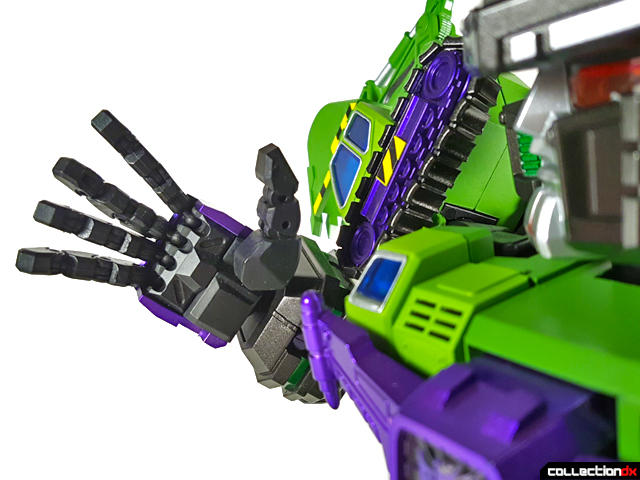 Let's just get one thing straight. If you love ratchets you might find yourself very fond of this figure. Every friggin' joint has ratchets save for a couple of swivels but most every darn thing makes those delicious clicky sounds. Head, neck, shoulders, elbows, ab crunch, gimmicks.... just believe me...lots of ratchets! this allows for solid posing of the figure. I can't say it's the most articulated figure because of it's compact design, but it does have enough joints to keep you busy. 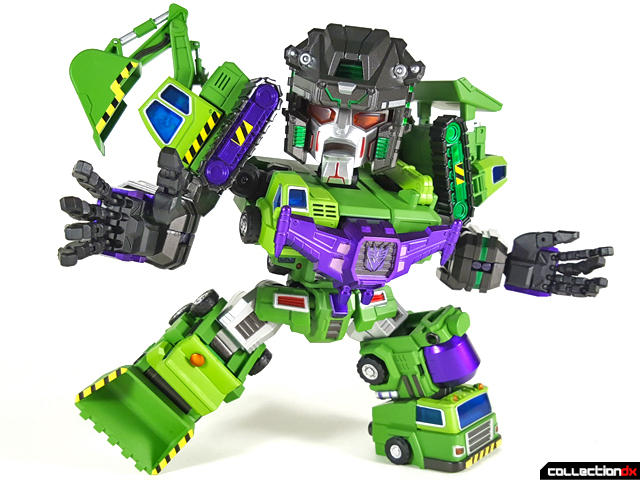 So yeah, even the mouth opening feature is ratcheted. Why not. 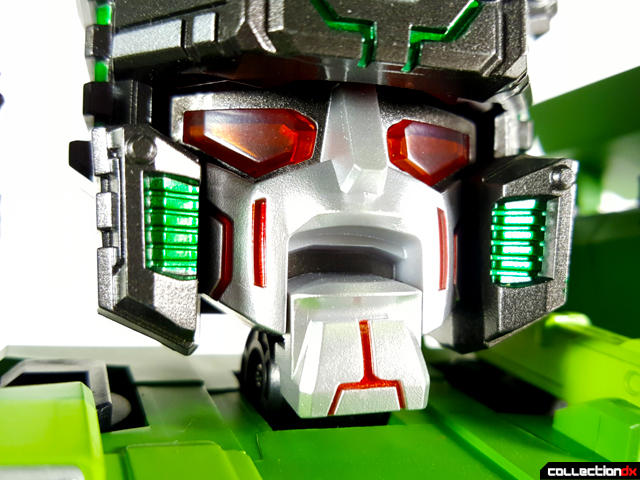 Scaling would obviously be done with the other smaller Mecha Nations figures but they were not at my disposal for the photo shoot but you can see them in the video review. However here he is with everyone's favorite Masterpiece. The MP-10 Optimus Prime. 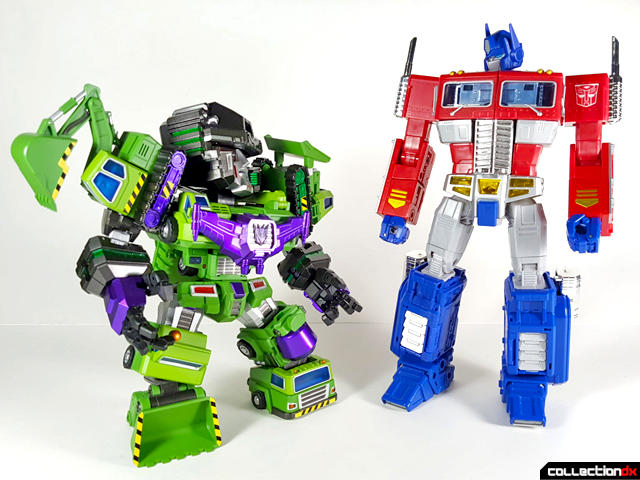 Just for giggles, here he is with some Generation Toys Constructicon figures. 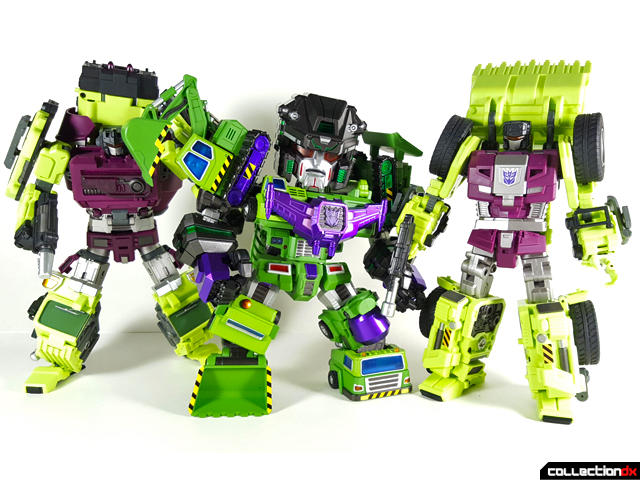 There is a visor gimmick which is easily activated by a small lever on the back of the head. 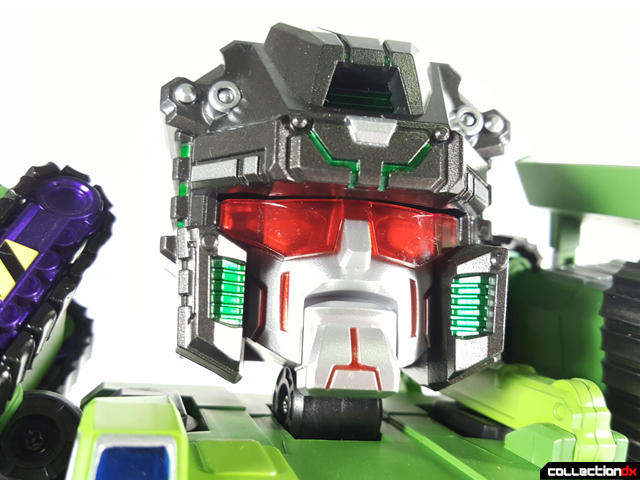 Devastator also come with a nice gun and a separate non articulated hand to easily hold the weapon. 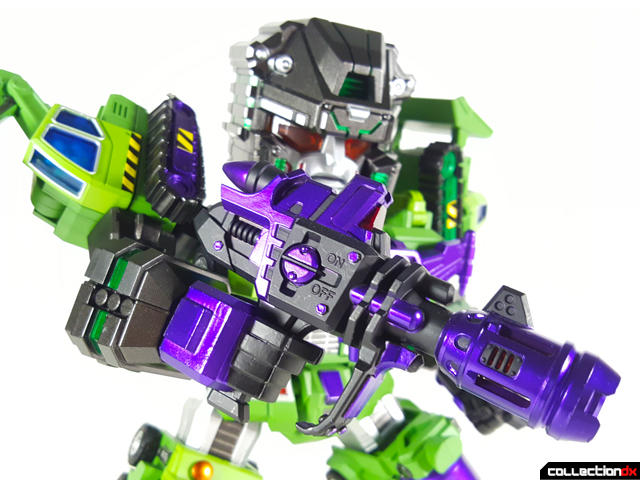 Now of course, there are tons of LEDs riddled about this figure. I dare not even try to figure out how many button cell batteries it used which are by the way included and very much appreciated! The gun has a light up feature and also acts as a transmitter to activate the LEDs on the figure by way of buttons placed on the side of it. The on button turns on the gun and LEDs of on Devastator and the off shuts them off all while emitting the familiar transformation sound. 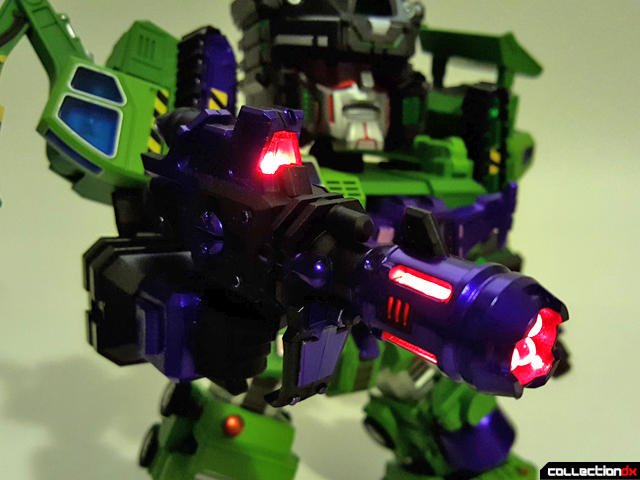 Now I must have left the LEDs on or my daughter activated them and left them on...in any case, I had no use of the LEDs during the photo shoot so I had to screen capture from the video. 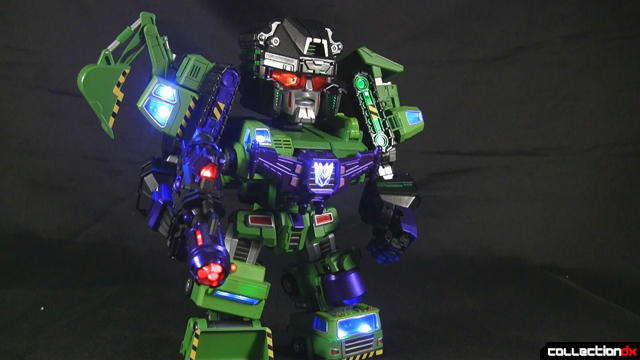 I can't honestly say that this figure is for every Transformers fan. Hardcore Transformers fans seem to be the pickiest about well, pretty much anything so some may find it hard to swallow a $126 figure that doesn't transform and doesn't really fit in with anything in the line unless they are already collecting Mecha Nations figures. This does well as a crossover figure of types for collectors like me who enjoy the characters and don't mind seeing them in baby-like proportions. Just be prepared to hunt down teeny batteries if you go LED crazy.