Here at CollectionDX there are several of us who absolutely love these weird off-brand transforming robots made by manufacturers like Wing. These are generally not bootlegs but toys made in the same style of popular brands while being completely original designs. While JoshB and I have meticulously studied the encyclopedia created by Japanese "B-class transformer" collector, Butto, he does not appear to have this particular piece. In the early 90's, Trendmasters picked up a lot of these toys and released them in America under the "MASTERBOTIX" line. Without any corresponding Japanese release to give these two toys a name, they are only known to me by the generic as hell name: "Form-Changing Robots." 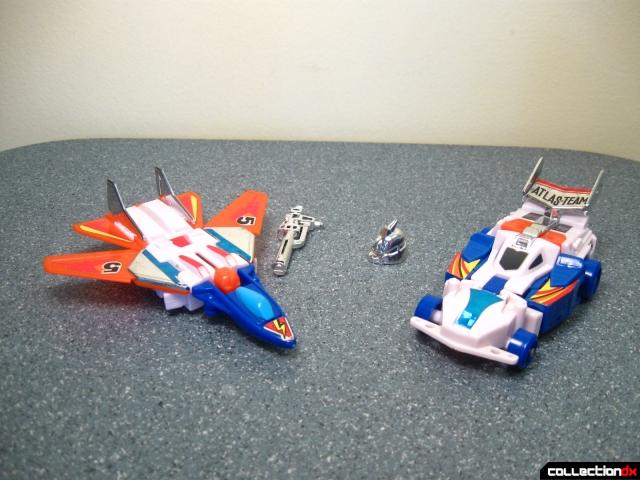 This set of small plastic toys consists of a humble jet fighter and one of those ubiquitous baja buggy looking cars that seem to pop up in every transforming robot toyline once people start running out of ideas. They're both cast in the same red, blue, and orange plastic with minimal use of paint apps, chrome, and shiny stickers that make them rather charming. Their only accessories were a chromed helmet and a gun that I think belongs to them. I have enough of these nondescript chromed guns that I'm starting to lose track. 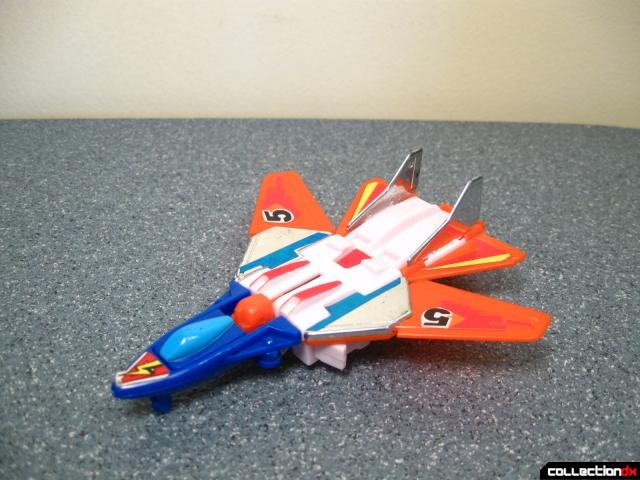 I know some of you from Chappy Sinclair's flight school are thinking this is an F-4 Phantom, but I can assure you this toy attempts to emulate the Soviet Union's cutting edge MiG-29. You see it's the tailfins give it away. This guy is around four and a half inches long in jet mode and sports a mean lookin' lightning bolt sticker on the nosecone. I appreciate how the designers gave it a flip down nose wheel to go with the two wheels at the jet's rear. Sadly due to plastic quality of the piece the jet can't really roll along a surface with any modicum of smoothness. 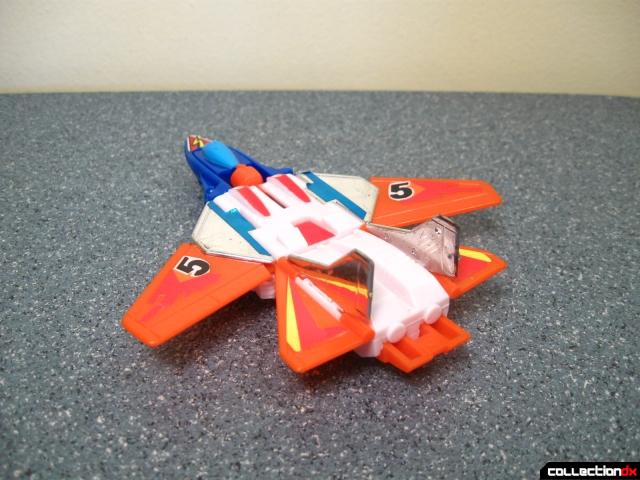 The big "5" stickers on the wings plus the extra ones on the elevators tell you right away this is a cool jet that you need to own. 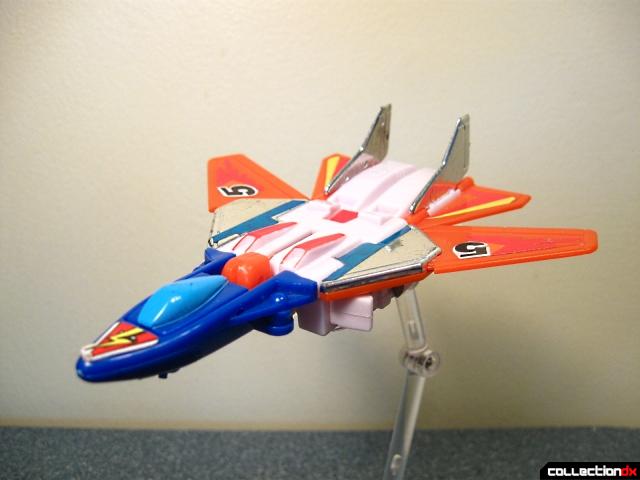 While the visible arms on the side and very obvious head behind the canopy make this figure roughly on par with most Transformers jets, I find this guy looks reasonably legitimate in flight. You know I can't go easy on transforming jet even if it's one half of a set that cost $3.97. 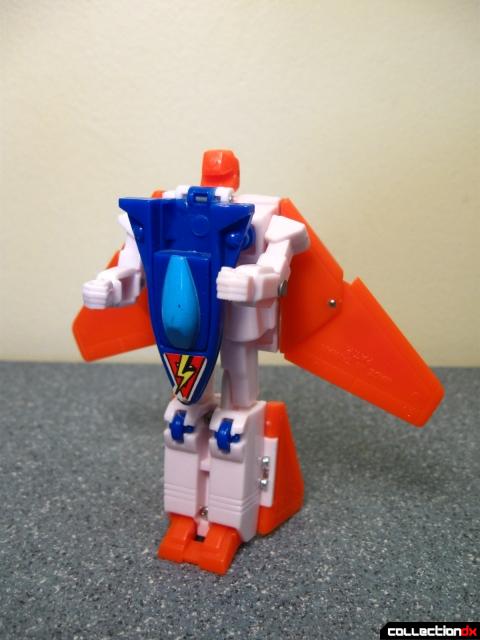 The jet undergoes a simple yet familiar form change to become a quaint little robot. 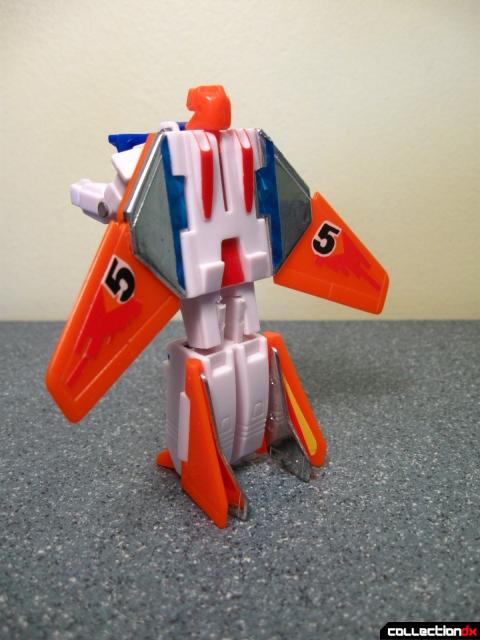 While the jet's wings feature some variable geometry style movement they do not tuck away neatly like on a Jetfire. Oddly enough the chromed wing roots can wiggle just a bit up and down but it feels like trying to sweep them back would snap them off. 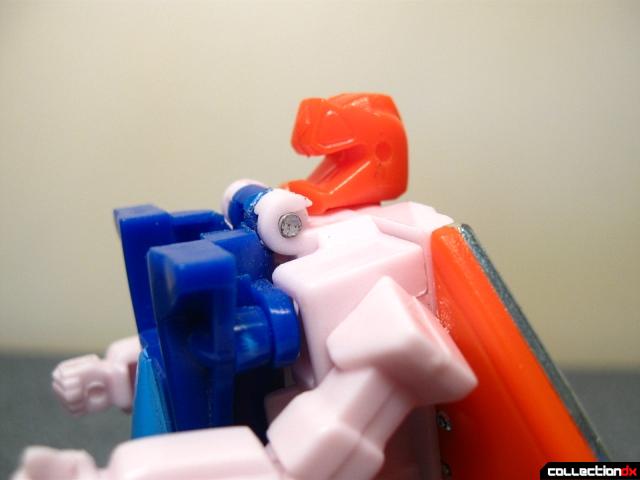 Probably the most curious aspect of the jet guy's design is how rather than having the typical cool robot visor for eyes it just has... nothing. I am not sure if this gap was meant to be filled with a clear piece or if perhaps the robot is meant to have a big toothless grin all the time. It's as if the toy designer's ambition outstripped what could be done on a budget so all we are left with is the puzzling "smile" of an unnamed toy. 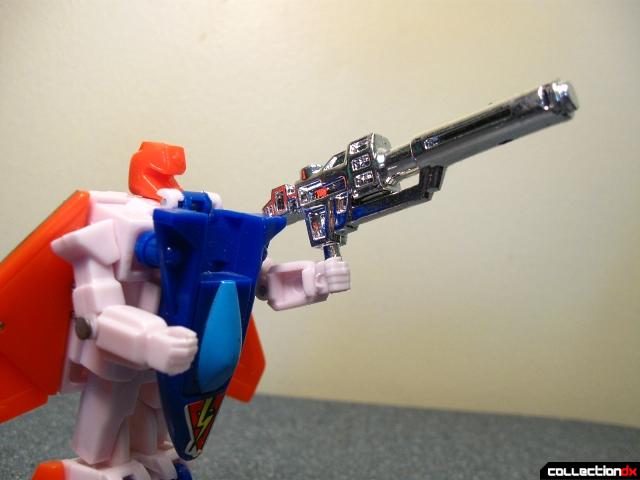 The big chromed cannon sorta fits into the hand of either robot for some over-sized sci-fi firepower. Working elbows give this guy just a little extra class while hefting his beam magnum. 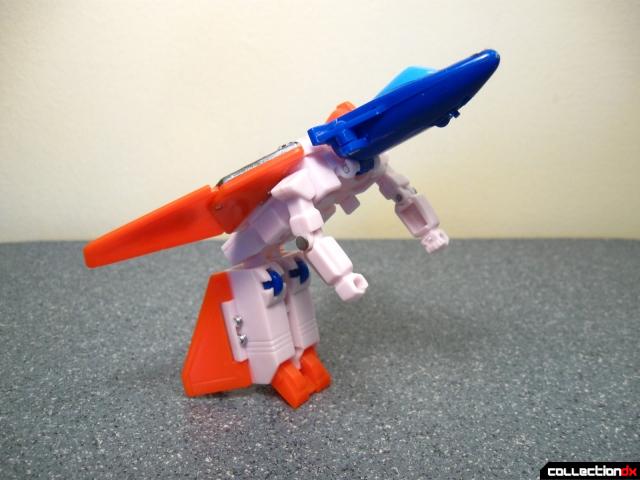 And thanks to this figure's third mode, it can transform into the most ghetto Gerwalk on the block. Please leave these kind of stunts to the experts as breathing on the thing will make it face plant (nose plant?) forward. 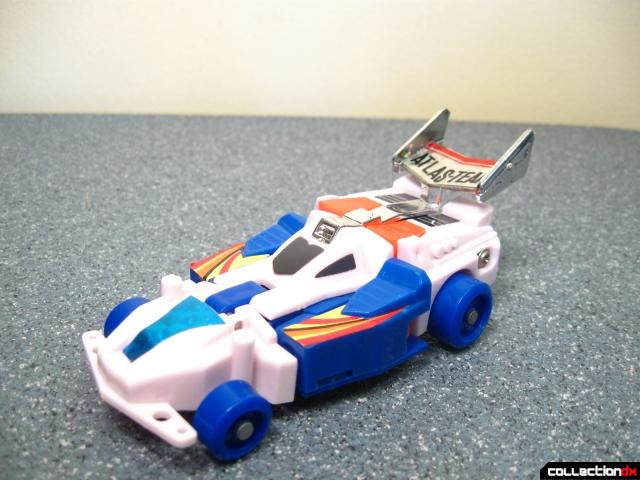 The other half of the Form-Changing Robots set is this RC car looking baja buggy. It's one of those things that kind of looks like a real car but you can never quite place it. The car guy is about the same size as his partner. 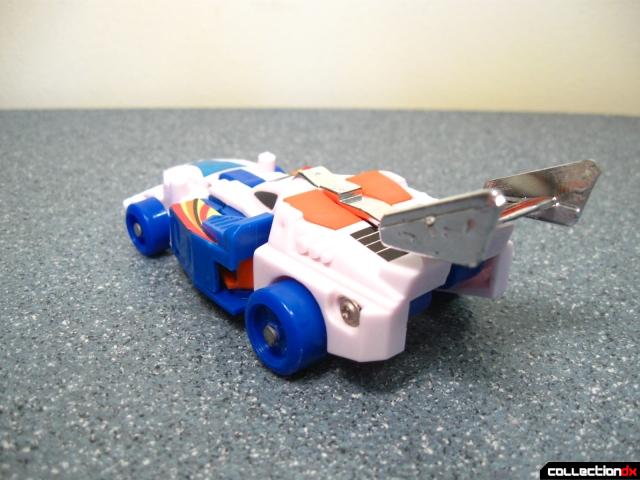 Despite some attempts to get clever with the shins sliding around on the knee joint, the car guy doesn't quite stay locked together in car mode. His four blue wheels are functional but are so stiff there's little point in trying to roll him around. 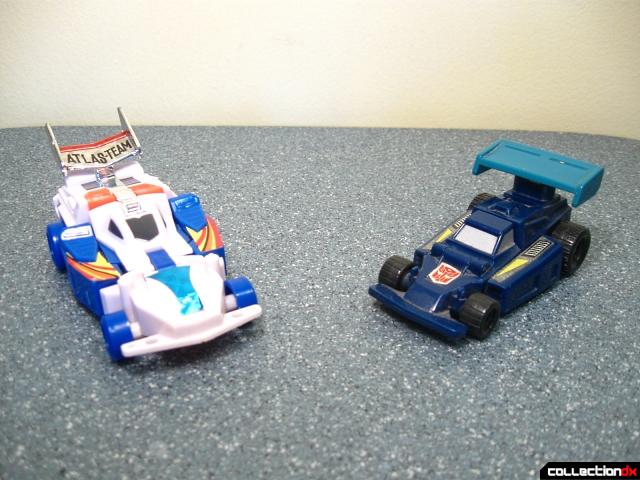 I know you're looking at that baja buggy and saying, "say isn't there a Sparkabot just like that?" In response I would say, "that Sparkabot's name is Fizzle you philistine!" as I vehemently rev up his cold spark engine in protest. Putting aside my loyalty to late G1 Transformers, you can see Fizzle is not quite the same as his off-brand cousin despite sharing a similar baja buggy mode. 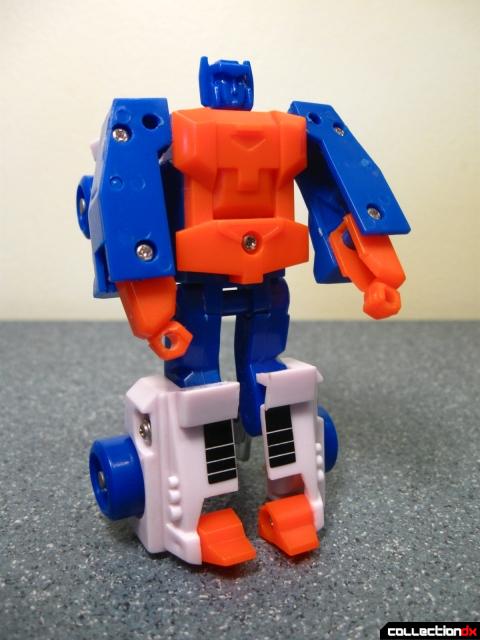 Car guy's form-change is a little more involved than jet guy's and is wrought with danger as dodgy plastic quality can lead to breakages in the rod the arms slide in and out on. I should know because this is my second set of Form-Change figures from back in the day. The resulting robot mode could be any old transforming baja buggy, just rendered with softer details and less paint. 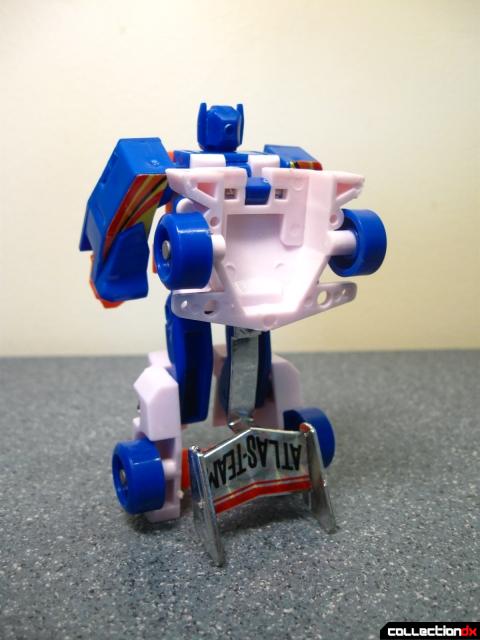 While it may not look it, the spoiler "tail" coming out of the back of the robot is very important to making this guy stand up. Despite making a lot of effort to give this figure two separate legs, the car guy is still somehow just back heavy enough to need extra support. This will be doubly important later on. 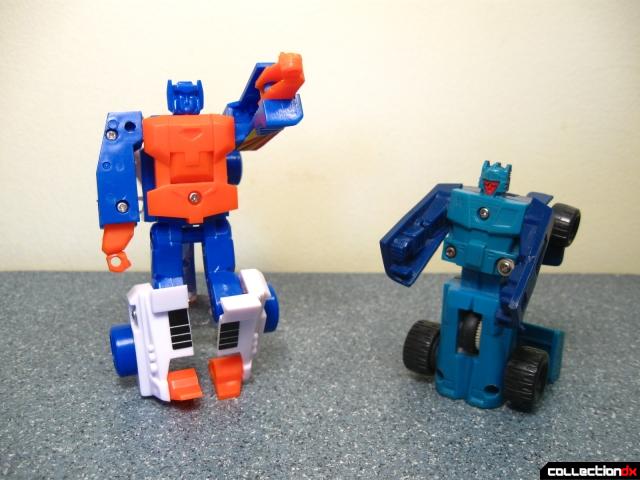 Car guy likes to show off that his knees actually work which makes Fizzle's confidence start to fizzle out. It's ok though because Fizzle just reminds himself he's the kind of toy that can be buried for ten years and still work great. 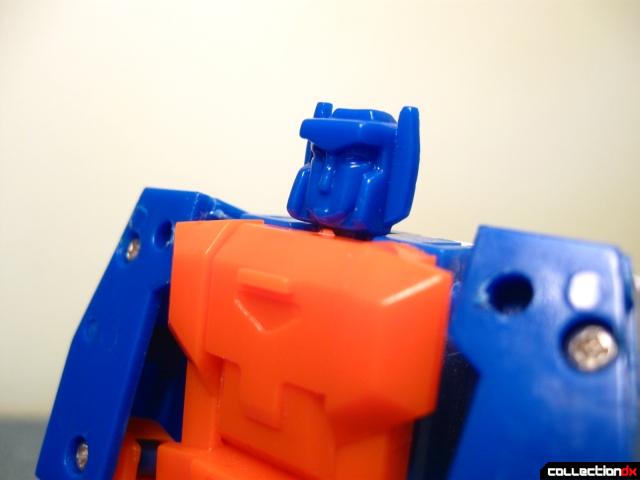 Like jet guy's strange empty smile, car guy features his own peculiar facial quirk. While the overall head sculpt is highly reminiscent of any Joeblowatron Transformer... 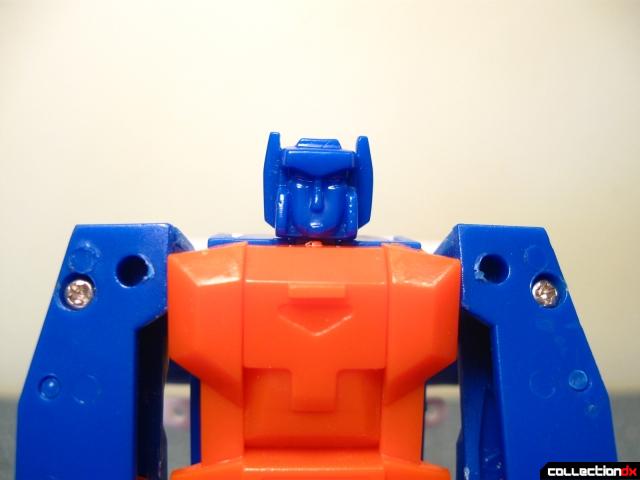 He has no mouth and yet he must scream. 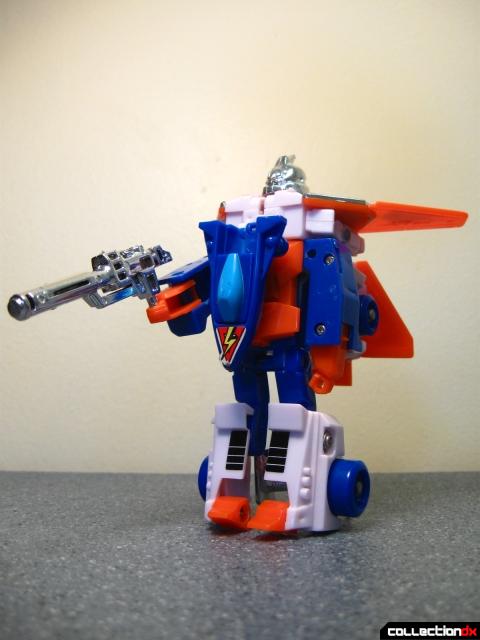 So the packaging for these guys proudly boast "Two Adjoin into One Robot!" and adjoin they do into this... thing. From some angles it looks almost majestic but from others it looks... 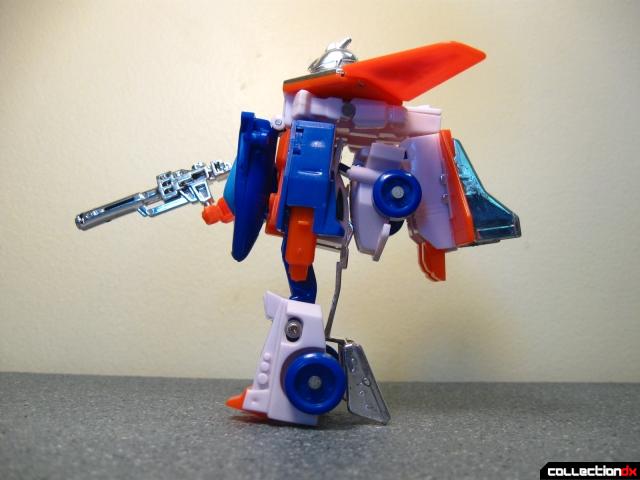 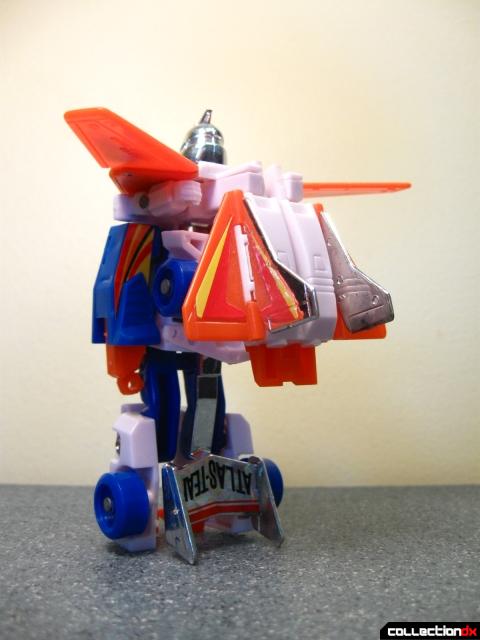 Conceptually having one robot form-change into a kind of "battle poncho" for the other is pretty on par with a lot of more upscale combiners but here it just looks a bit off. Car guy's third leg is definitely needed to support the added weight of jet guy being draped over his shoulders. Also if you move the arms of car guy up too far he can knock jet guy off. 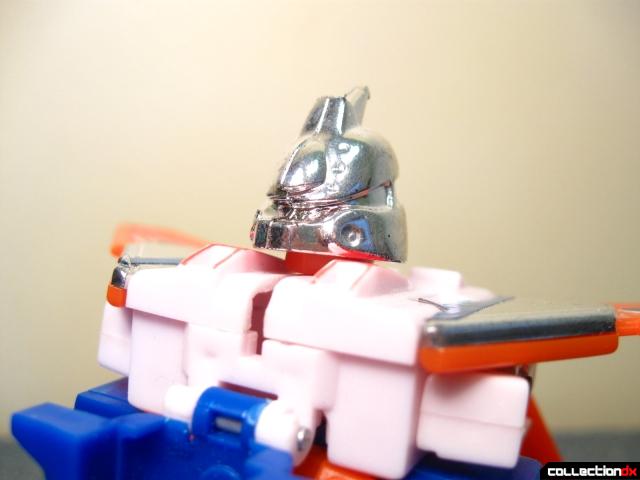 While the combination mostly consists of unceremoniously tabbing the chest of one toy into the neck area of another, at the very least they give you a shiny helmet to go over jet guy's nightmarish grin. This helmet bears all the earmarks of a Wing toy and looks nice enough for what it is. 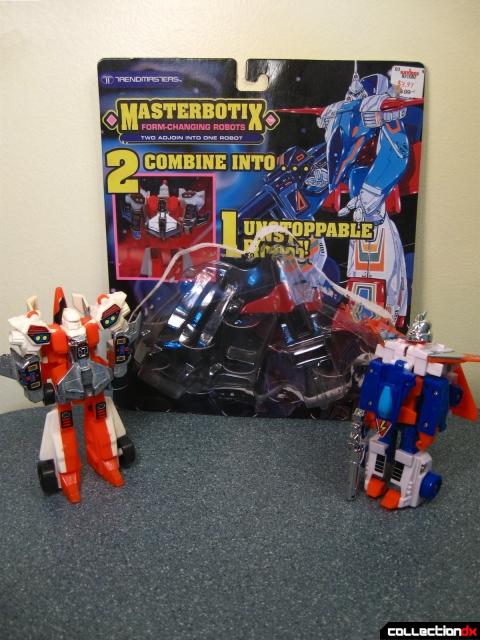 Some may remember my review of another off-brand combiner called W Jeccar who is the owner of this Masterbotix packaging. 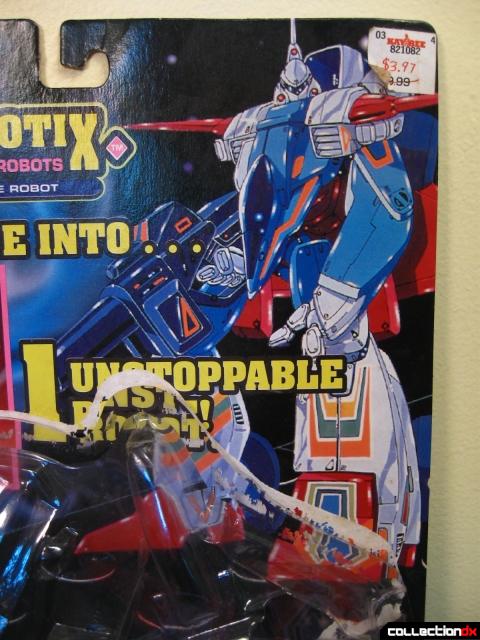 I distinctly remember the car jet combiner coming on the same card and this snazzy artwork is clearly depicting an idealized version of the toy in question. The lack of evidence for a corresponding Japanese version of this toy is rather curious because this kind of packaging art is very common among toys from Wing. Also note the vintage Kaybee Toys price tag from back before they had to abbreviate their name to ensure kewlness. 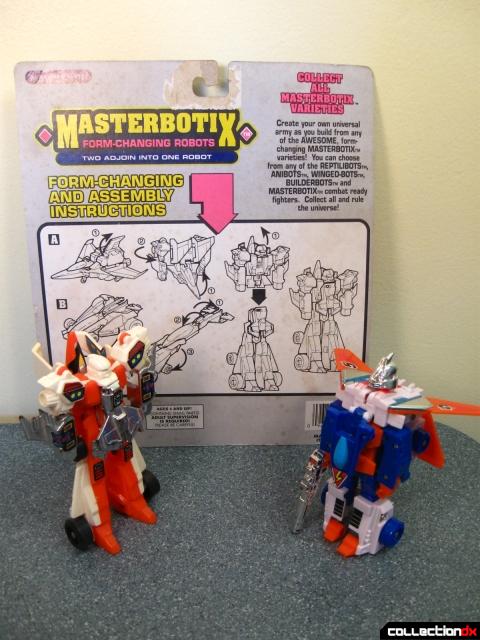 The back of the card sadly does not give any specific name for the robot it belongs too and only tells of its owner through the basic instructions printed in black and white and a color photo on the other side. 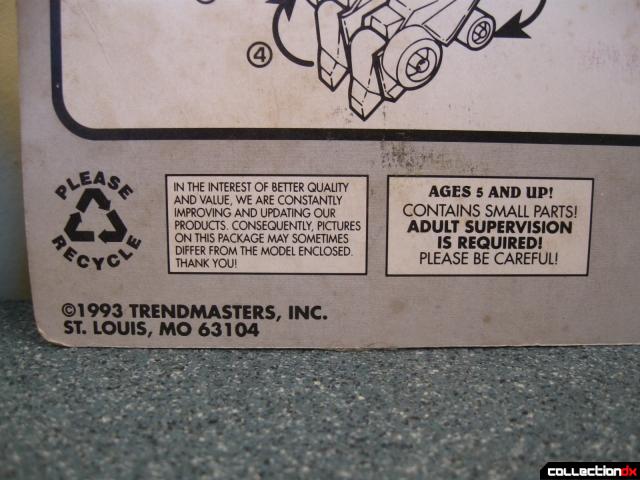 The familiar Trendmasters logo gives some legitimacy to this toy's release as does the very reassuring disclaimer that implies the box photos could depict a blue and white robot while the actual toy is silver or something. Gotta love how they cover their butts even in the toy biz. 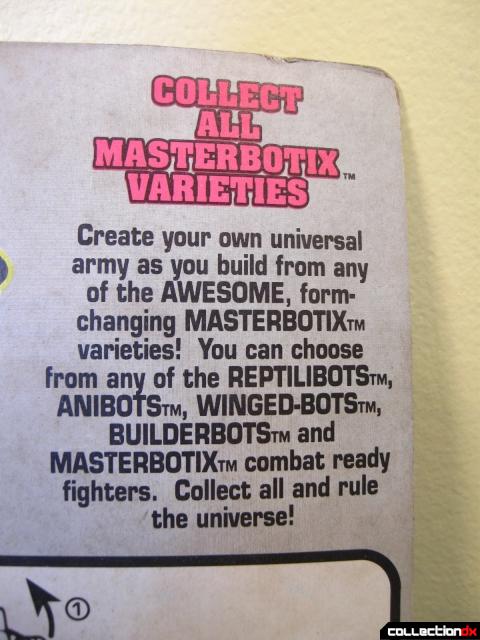 A number of toys from Wing made their way to the west under the MASTERBOTIX banner. Despite my grumblings about the build quality for the car jet combiner, I cannot deny he is AWESOME and how I wish I could collect all of these toys and rule the universe.

In the end this pair of unnamed and mostly undocumented toys serve as another reminder that you don't need to be a hundred dollar intellectual property infringing figure to invoke the look of a Transformer and be an okay toy. Despite owning two sets of these guys, I haven't stumbled across anymore like them. In fact even our own JoshB can't find a lot of evidence they were in a Japanese toy line. They do appear to have that pedigree so I can only hope by putting this review up that maybe some new information can come to light and at least give these guys a proper name.