I’m going to start off this review by saying that I know almost nothing about Kamen Rider.  I saw Masked Rider as a kid, but the most I remember of that is the theme song.  When Josh offered this figure up for review, it reminded me vaguely of the Masked Rider version, so I snatched it up.  If you want Kamen Rider babble, go somewhere else.  I’m going to talk about a toy now 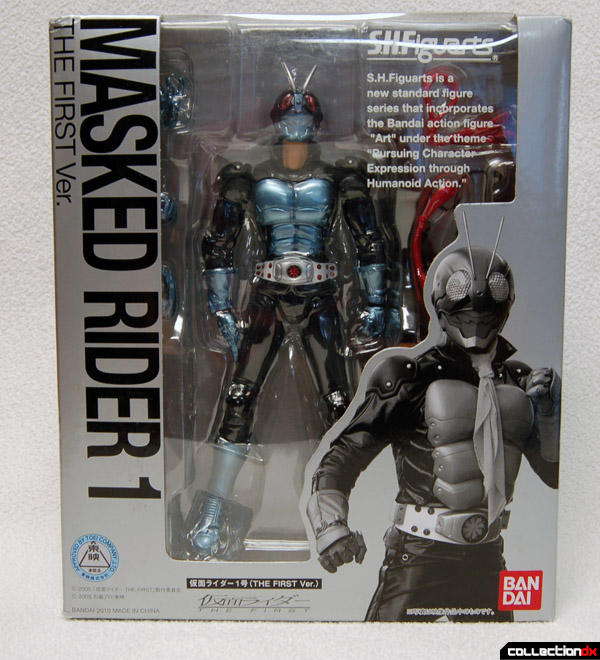 The figure is of “Masked Rider 1 THE FIRST Ver.”, which means… something.  The description of the toy on Big Bad Toy Store says it’s from a movie.  It’s probably cool. 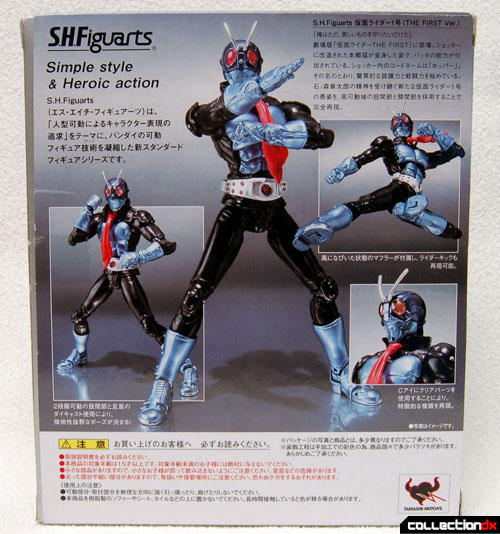 SH Figuarts is Bandai’s line where they make all other small scale action figure makers look like chumps.  The box features a pretentious sounding blurb about humanoid action and expression of form, and this review will demonstrate that they have earned the right to be a little high and mighty.  The box itself is sturdy and classy with a grayscale finish and big window that lets the toy do the talking. 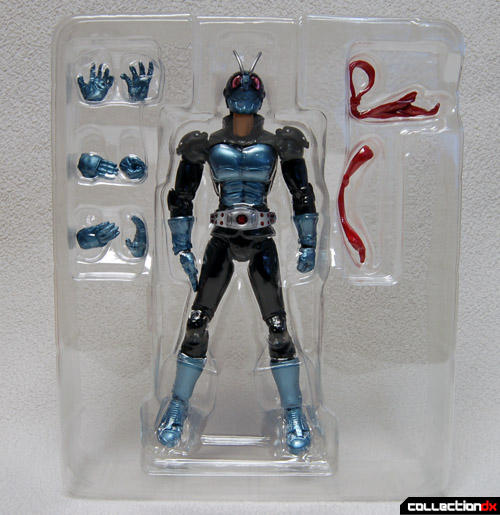 In the box you get a nice vacuum tray with the figure, four sets of hands, and two scarves.  Everyone knows that fighting is all about hitting people really hand, so the most useful hands are the chopping hands and fists, so I attached one of each and put the box away. 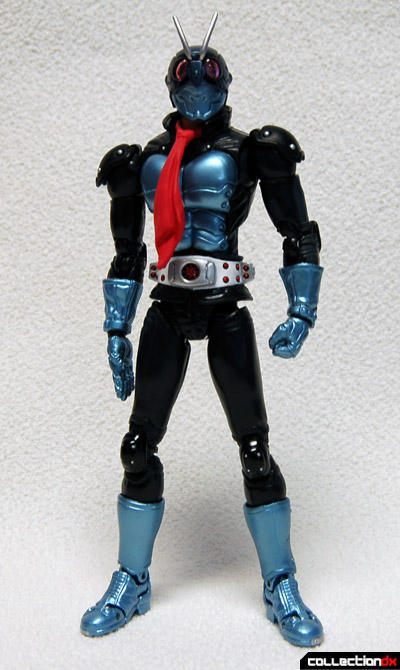 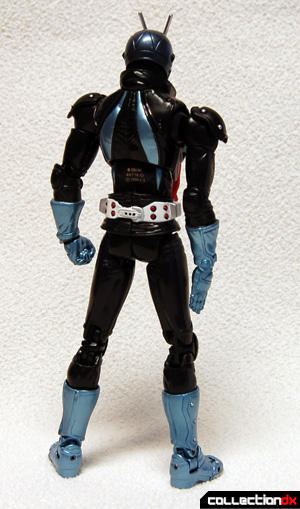 Masked Rider stands six-and-change inches with the antennae and features a flawless finish.  The black has a convincing leather sheen to it and the armor is slightly metallic.  The belt is a separate part that sits around the waist.  The whole figure is made from a firm, hefty plastic.  No soft PVC crap here! 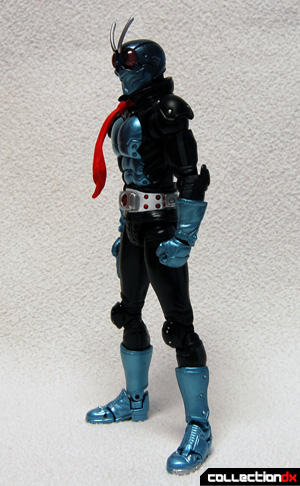 One thing that surprised me was that the copyright spiel is on the small of his back instead of his feet, but I guess that’s because the soles of the feet feature fully molded detail and Masked Riders do a lot of kicking.  Masked Rider also features some grey trim on the suit and the effect is really great.  This is a classy looking figure. 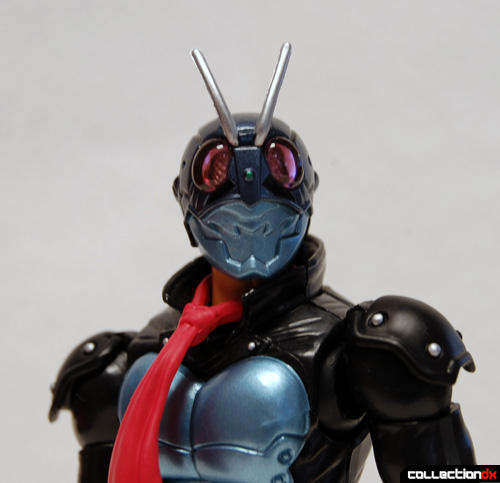 The bug-eyes are glassy transparent parts with some detail underneath and look awesome from all angles.  The antennae are made from a softer plastic so they won’t break while you are battling whoever it is modern Masked Riders fight. 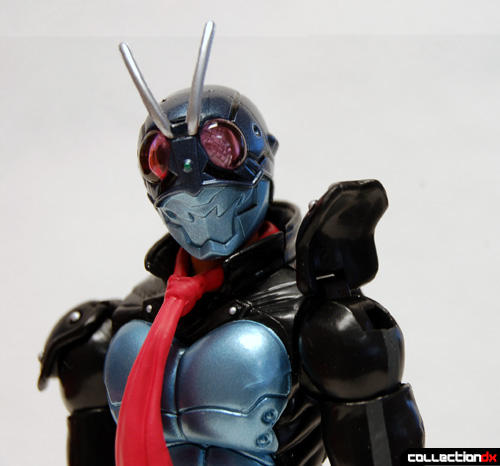 Worth noting is that the shoulder pads are articulated and perfectly tight. 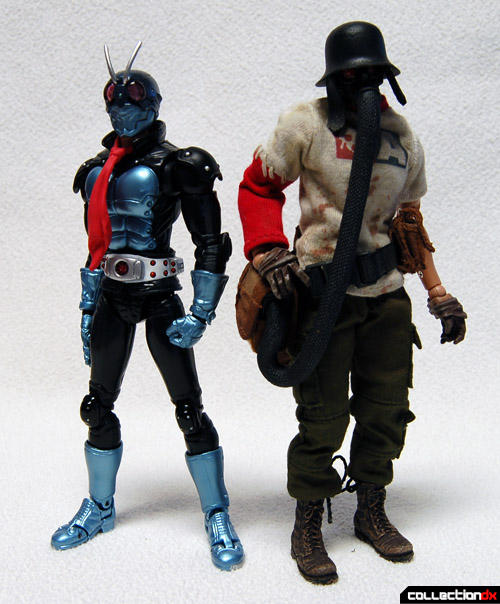 Here’s a comparison shot with my 1/12 (6”) scale Nom de Plume, the only other six inch figure I would consider ‘high end’ enough to be worth comparing to. 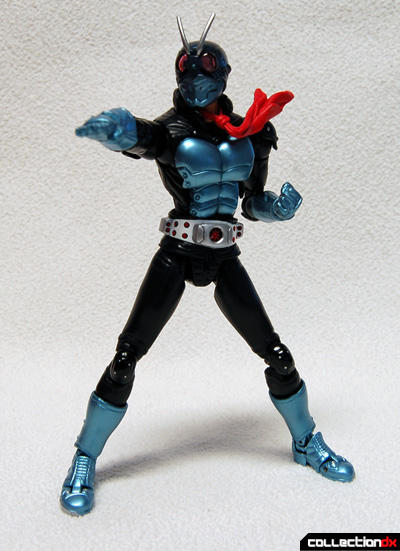 The real thrill of SH Figuarts figures is the incredible articulation.  Anything and everything that needs to move does, and well.  If I had to guess, I’d estimate there were about three bazillion joints, conservatively. 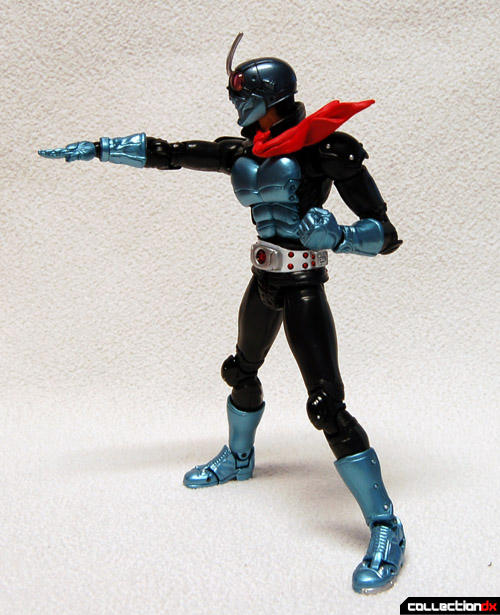 The ‘dynamic’ scarf really adds to the dynamic poses you are going to accomplish with this figure. 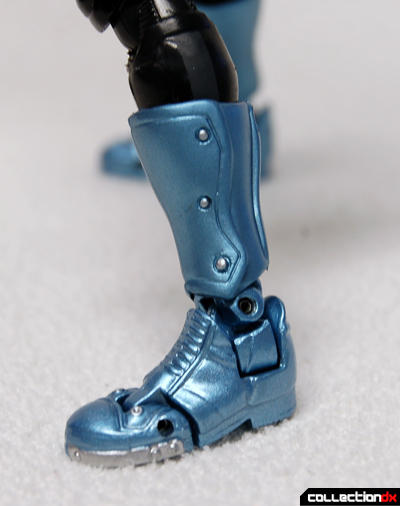 Most SH Figuarts figures apparently feature diecast feet for balance, and that is cool.  CDX people already know diecast is cool, but smartly used diecast is even cooled.  This shot also shows how much engineering went into the ankles, an area that many action figure makers skimp on. 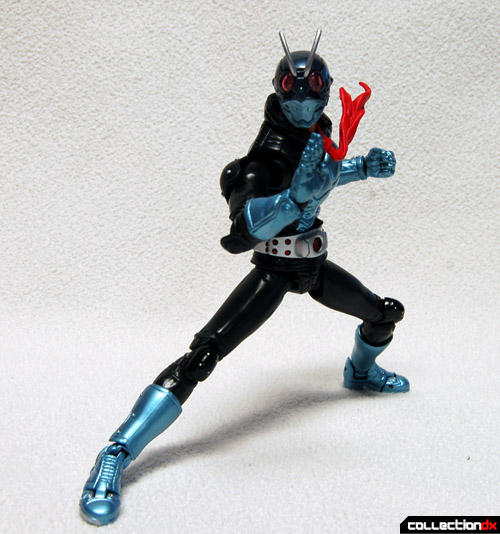 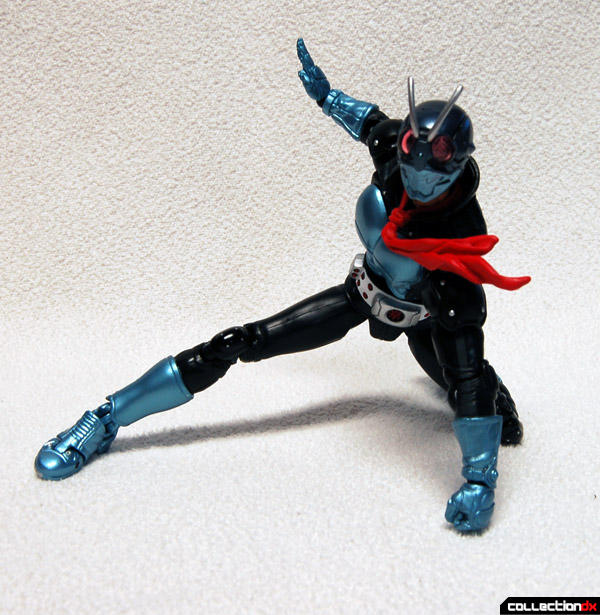 Masked Rider can hit deep, powerful poses thanks to all that articulation. 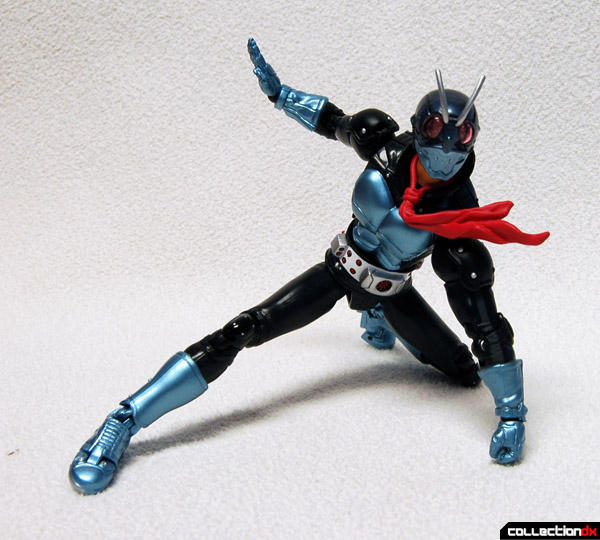 He can even do the ‘Iron Man Poster’ pose, which is something of a rite of passage for my toys. 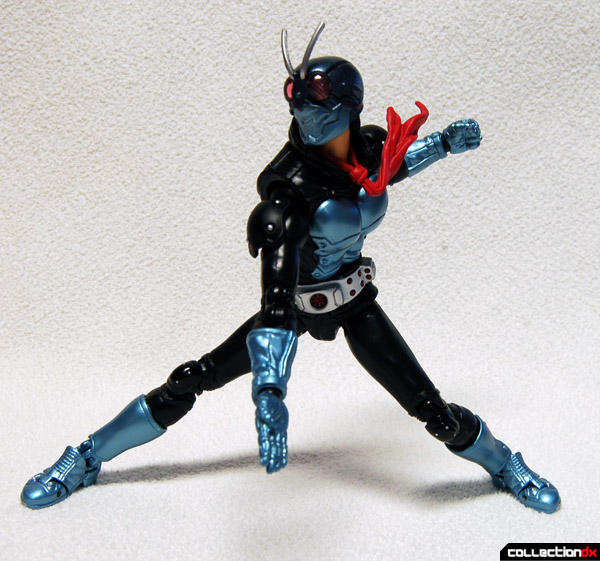 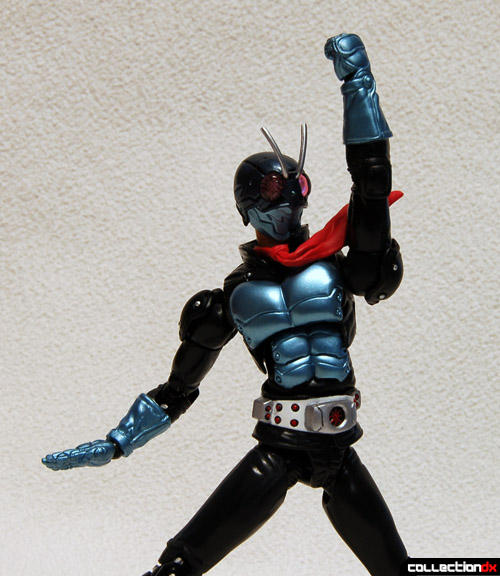 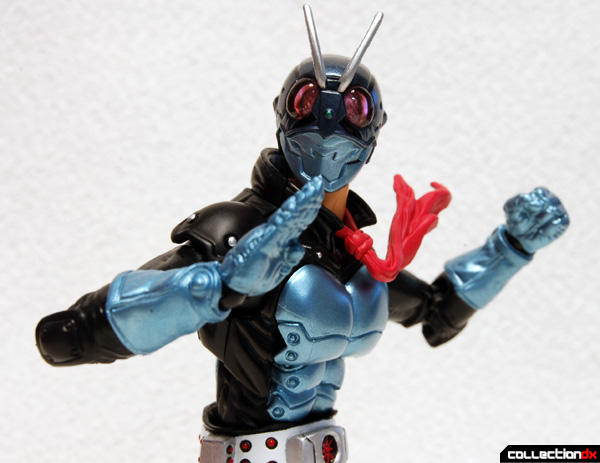 SH Figuarts does not seem to cover a ton of franchises right now, but I would love to see it grow to encompass all the cool Tokusatsu franchises.  Metal heroes like Beetleborgs and Sharivan would be killer, as would some Western franchises.  I did not know what I was getting when I picked this figure up, but I was blown away!  I am supremely jealous of Kamen Rider fans for having so many Figuarts figures to choose from of their favorite franchise.  The engineering that went into this figure is amazing, and makes other figures look like bad bootlegs.  The articulation, materials, and sculpting are all phenomenal.

You can get your Masker Rider 1 at Big Bad Toy Store right now!

Its pretty good. Give it a watch.

Yeah,unlike other KR stuff,this movie is actually available here in the US,you can even netflix it and such.
Pretty good,but the sequel pretty much sucks.

I have this figure too. It's pretty nifty.

Yeah the movie actually is pretty awesome. I seen it on Netflix then got lucky enough found it used at a local Moviestop for about $7, practically brand new. Not a scratch on it.

Nice! I love this version of him; reminds me of when they brought 'em to America awhile back. This is a nice price for a figure like this, too! I may have to track this one down.

Speaking of bringing KR to America,a couple weeks ago at a closeout store I found the figures from the last time they tried it in the U.S. (Dragon Knight.)
For the 7 or 8 bucks MSRP they were terrible,but for the 3 bucks they wanted at this place,what the hell.

it is actually PVC.. it is just not as soft..
although it is definitely better PVC in terms of composition...
the metallic parts are ABS as well as the joints because of paint and durability....
it is very very well designed for its time..while US designed action figures still had a long way to go at that time...