In the 80’s Kow Yokoyama and his two collaborators created a rich sci-fi world inspired by World War I, World War II and American sci-fi. Yokoyama’s series was originally known as SF3D and it ran in the Hobby Japan magazine. After a legal battle between Hobby Japan and Yokoyama over ownership of the franchise and the subsequent reconciliation, the name of the franchise was changed to Maschinen Krieger ZbV3000, or Ma.K. for short.

The story of Ma.K. deals with the re-colonization of earth many years after a nuclear World War IV had left the planet uninhabitable. Unfortunately, things do not go smoothly for those who are trying to make a new life on earth, as a war between the government and wealthy colonists breaks out. These battles bring about the creation of the Armored Fighting Suits.These powered suits were produced as model kits in the 80’s. Our very own Modcineaste has reviewed two of them; you can check them out here:

Now that you are back, we can talk about the Super Armored Fighting Suit, another weapon of war in the Ma. K. universe, which is the subject of this review; so let’s get to it!

Just looking at this beautifully designed box, you know this is going to be a special toy. 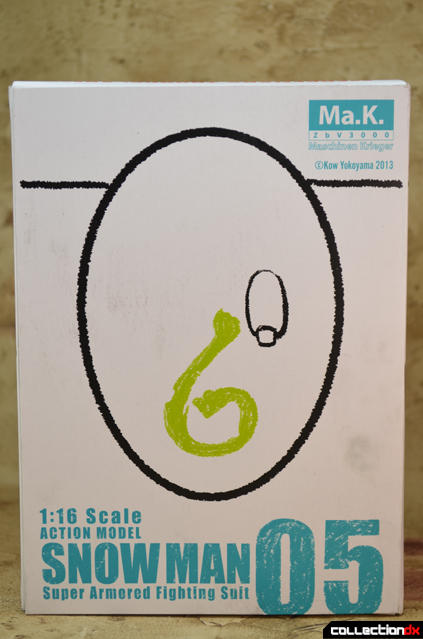 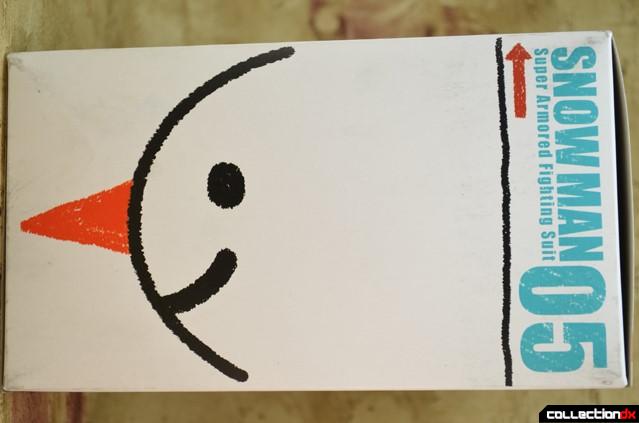 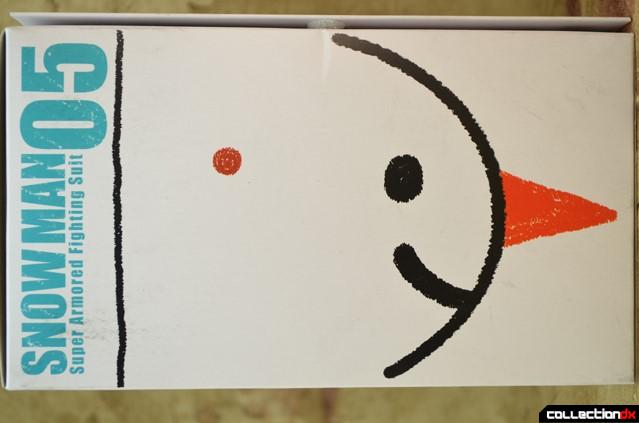 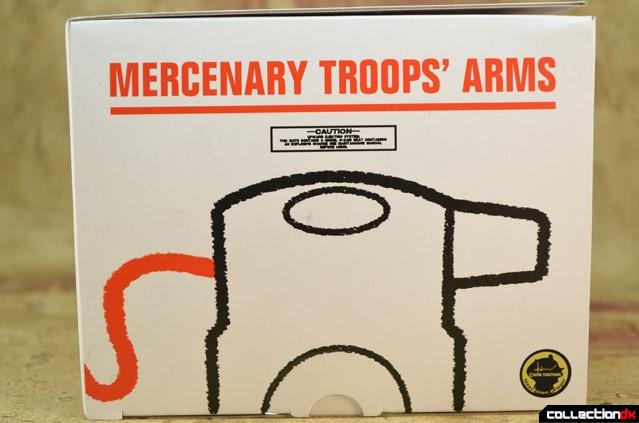 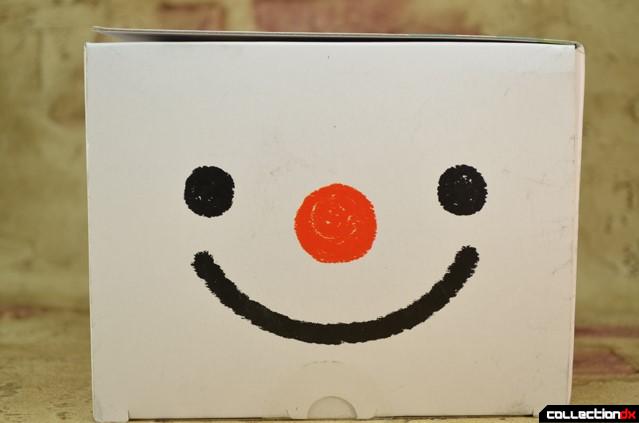 The minimalistic design on each side of the box represents a different side of the S.A.F.S Snowman’s head. The front cover of the box opens up to reveal a window through which you can look at the toy. 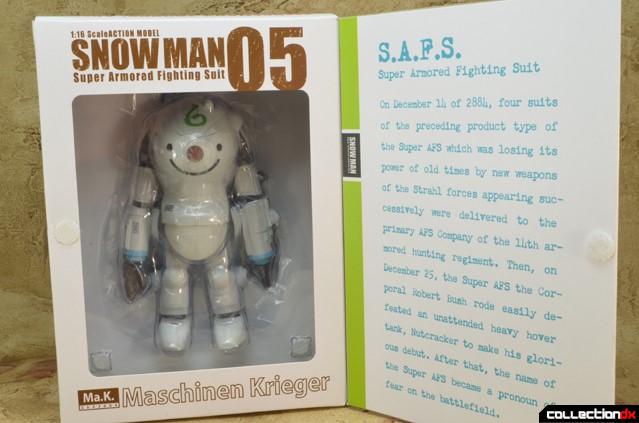 On the inside of the cover, there is an Engrish explanation of what a S.A.F.S. is. 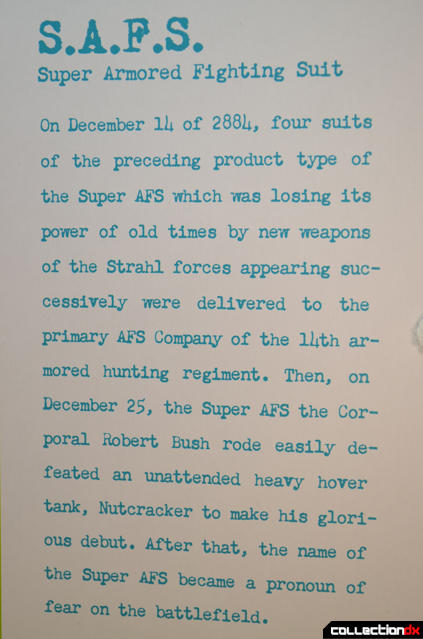 The S.A.F.S is a pronoun of fear on the battlefield, of course!

While this toy line is called Action Model, the name is kind of misleading. This figure requires no assembly, except for placing the antenna on the figure. 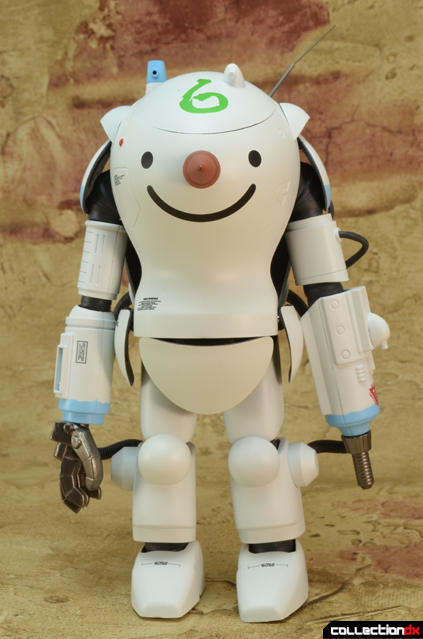 The attention to detail is great and I love the warning stickers on the body of this figure, which harken back to the model kit roots of this toy. 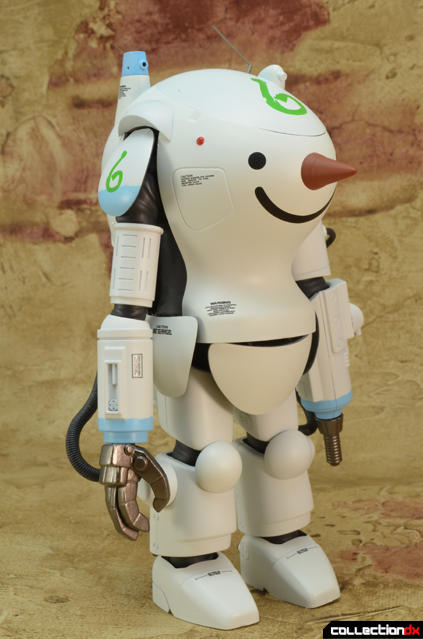 The S.A.F.S Snowman is a very unique combination of the powered suit look and the snowman aesthetics, that makes this both a deadly weapon and pretty darn adorable! 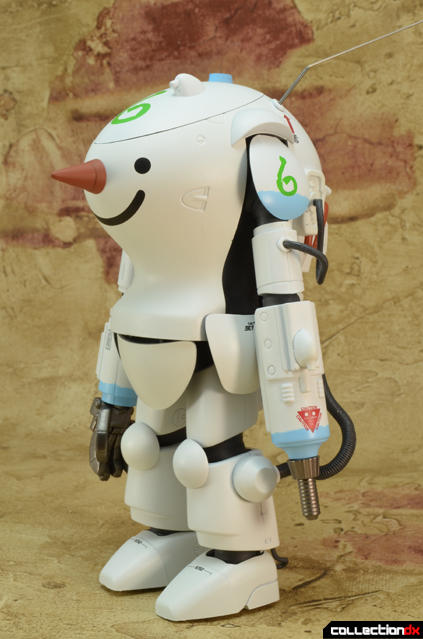 From the back, you can see the hoses and wires that help keep this powered suit moving. There is also what appears to be a heat sink attached to the back the Snowman; you know, to keep him cool. 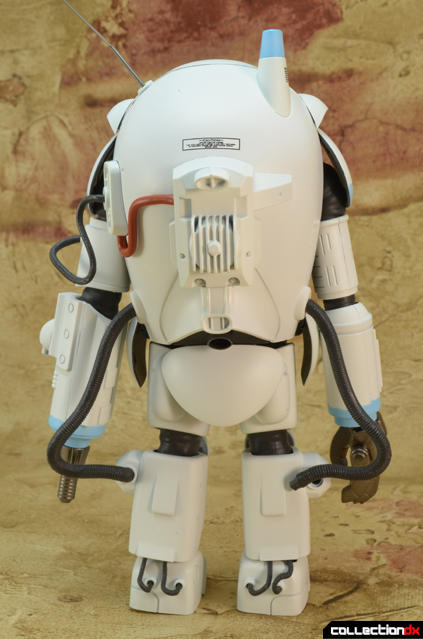 As for the action of this Action Model, it has some articulation. The knees have a joint on them, hidden by a plastic cover, which allows a little bit of movement for the legs. As for the feet, they are on some very stiff ball joints, which keep this figure upright very well; however, the feet have minimal movement. 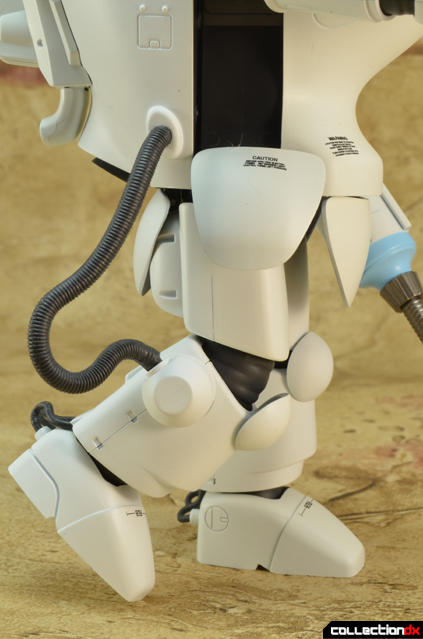 The front and side skirts of the figure can be raised a bit; though this serves little purpose since the thighs of the figure are pretty much stuck in place. 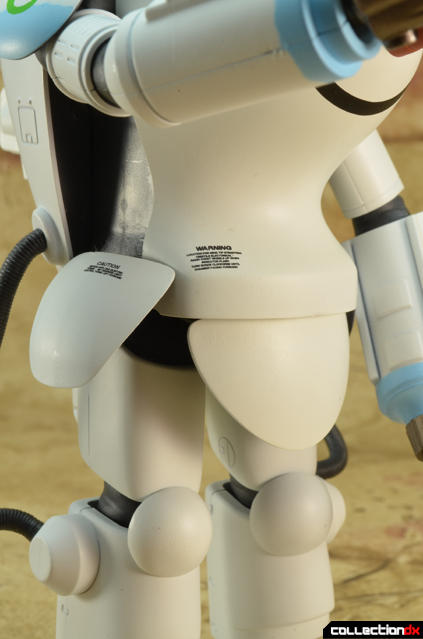 The shoulders are on a ball joint, which provides the best range of motion on the toy. On the other hand, the elbows appear to have double-joints on them that allow for about as much mobility as the joints on the knees. 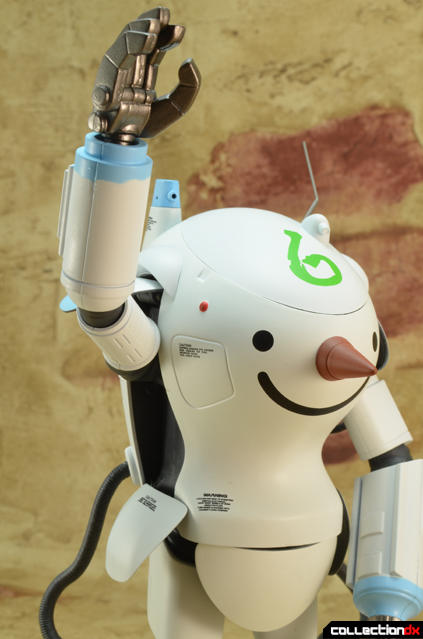 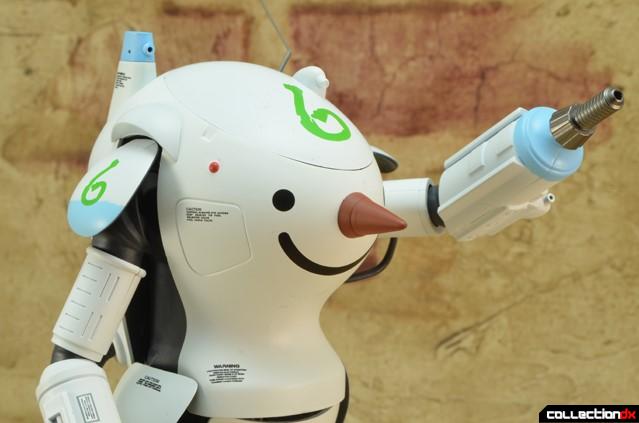 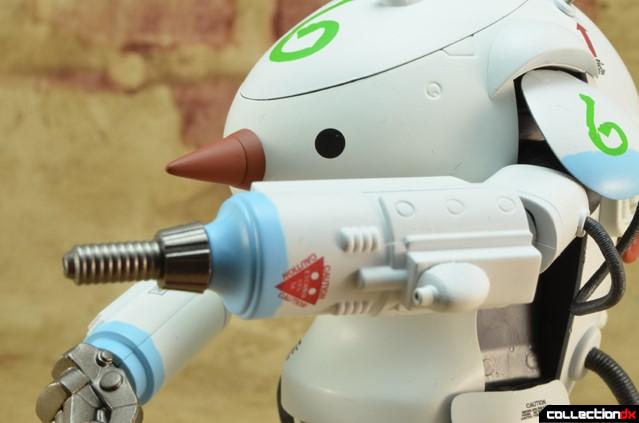 So you can get a couple of good poses out of this figure, just don’t expect to go crazy with what you can pull off. 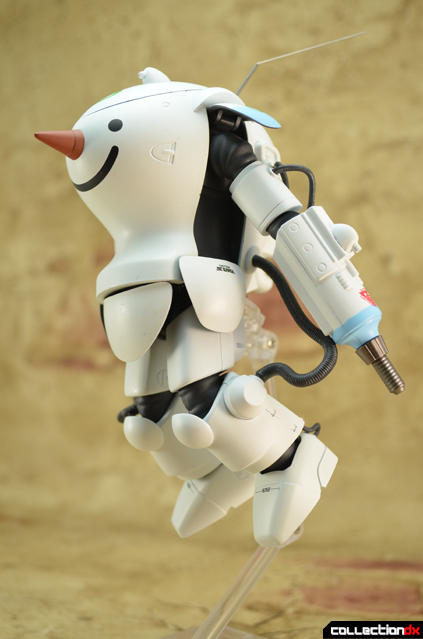 While some of the other releases in this line include a stand, the Snowman is packaged sans a stand. So I had to use one of my trusty Tamashii Stage stands for this shot. However, if you own a stand for one of the other Action Models, you can also use them with this figure, since it does have a hole on the back of the toy to plug that stand into.

What this toy lacks in mobility it makes up with the attention to detail of this figure. 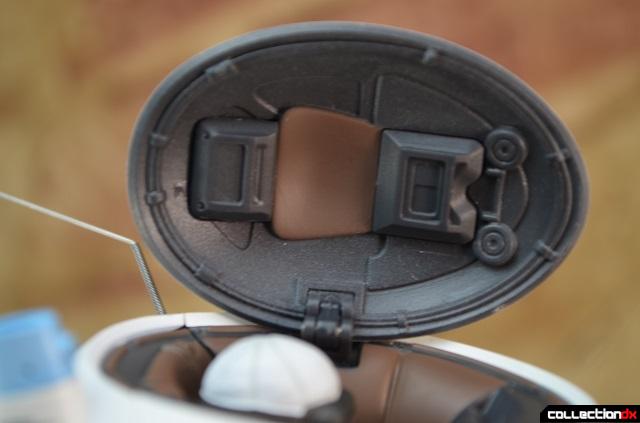 You can open the nicely-detailed hatch at the top of the figure, to reveal the pilot snugly resting in the cockpit. 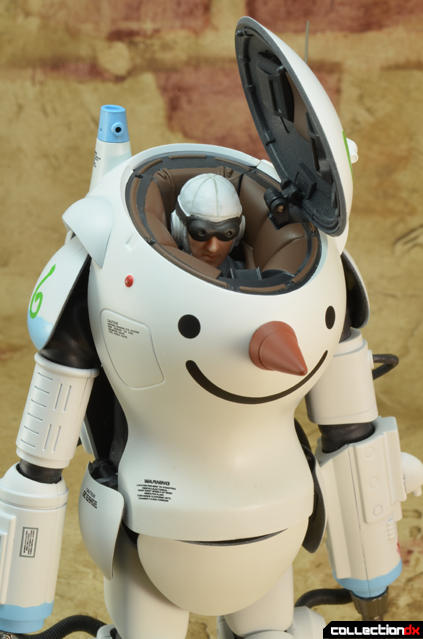 Pulling up on the camera at the rear of the figure will open up the cockpit. 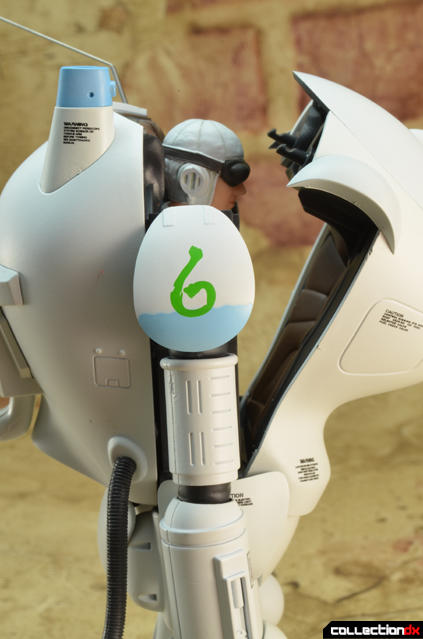 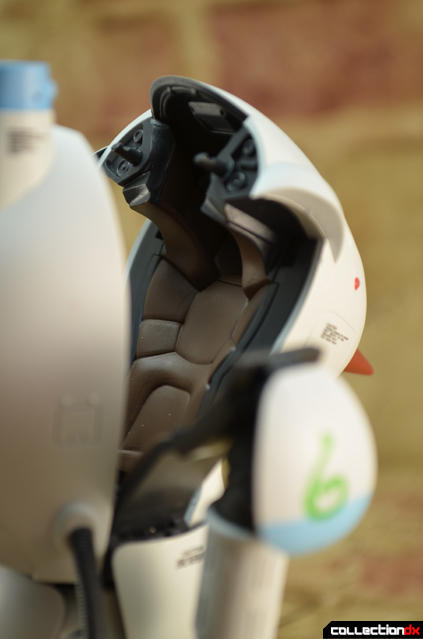 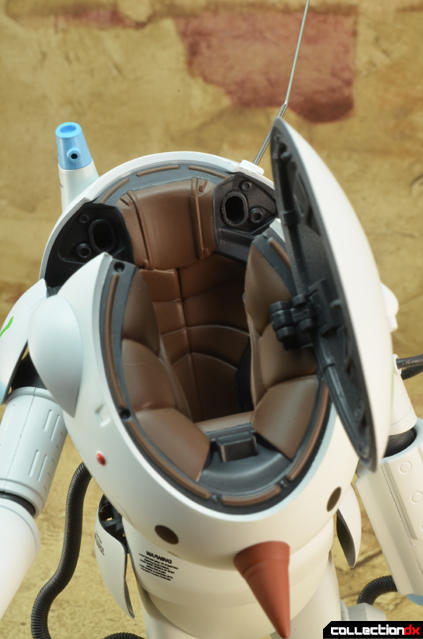 The pilot on the inside of the cockpit is removable, so you can marvel at the rest of the detailing on the inside.

The pilot is a basically just the torso and head of the pilot that would rest in the cockpit section. 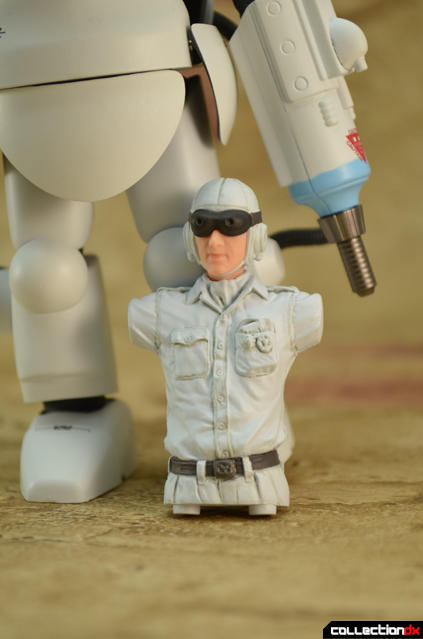 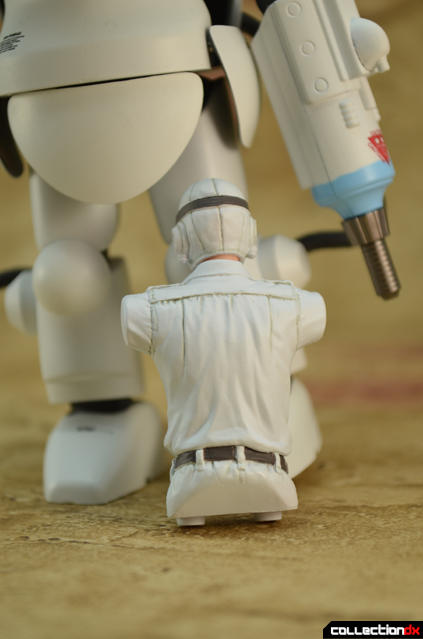 Unlike some of the other releases in this line, the Snowman does not come with a complete figure of the pilot to be displayed outside of the mecha. While this is only a stump of the pilot, it is still a nicely detailed partial figure. I really dig the fighter pilot uniform, wrinkles in the outfit and all.

As for extras, the Snowman is pretty light on those. It includes an extra right hand in a fist. 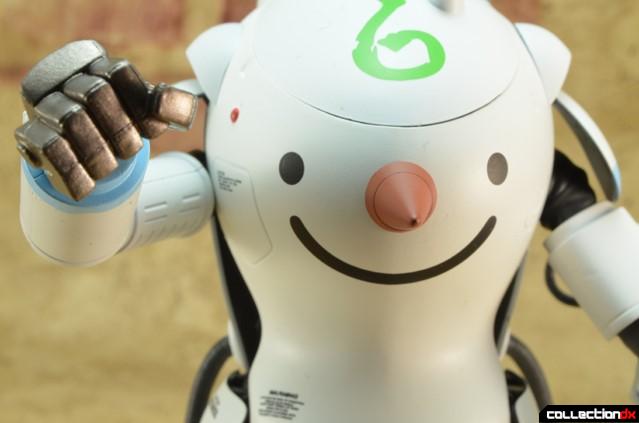 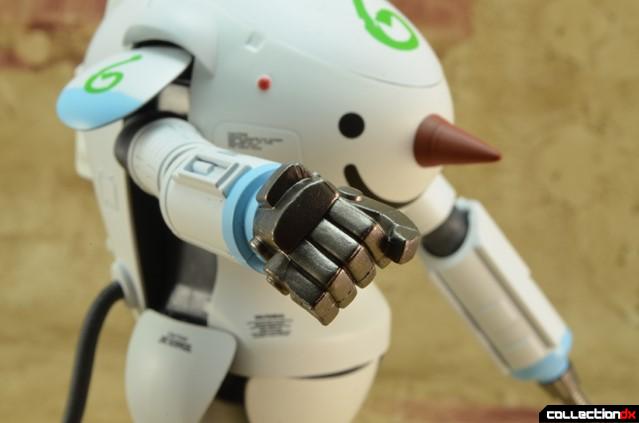 So while the Action Model S.A.F.S. Snowman 05 is not a model and offers a limited amount of action, I find it hard to hold it against this figure, since it makes a great display piece with some neat hidden details. I am glad SEN-TI-NEL produced these Action Models for the world to enjoy! These are a great introduction pieces into the world of Maschinen Krieger, that do not require you to hunt down the old model kits and then have spend the time to put them together.