Hello all! I’m 5 months new to both this site and collecting, so apologies with any missteps or missing pieces of information. I’ll do my best to address anyone’s questions in the comments below. Having said that, please be gentle – and away we go!

Poor Toynami… Any review of their Robotech collectibles can never quite stand on its own merits, as numerous QC issues have plagued their efforts over the years, and shadow (no pun intended) whatever their latest designed-in-house offering is. A quick sampling in most forums across the world wide webbertubes will yield opinions that seem to distill down to the following:

With the exception of the last (and really, if your underwear talks to you, you’ve got bigger problems than quality control issues with your favorite collectibles), the truth probably lies somewhere in between. Toynami can clearly design and deploy great products in-house, as they’ve garnered great reviews for other franchises they’ve made collectibles for, and the Masterpiece Beta Fighters are an absolute joy to hold & behold. So when things go bad, the hopes of collectors that this time, they’re going to knock it out of the park… well, it often transmogrifies into “rats, skunked *again*”.

What there is no denying is that the original release of the Masterpiece Maia Sterling Alpha was absolutely plagued with quality control problems. Brittle plastic, poorly mended cracks, sloppy paint jobs. But to their credit, Toynami did the right thing, and recalled the lot. And with the specter of that previous release hovering over, they’ve re-released the Maia MPC, this time built by the same fabrication plant that put together the truly wonderful Beta MPC Fighters. So, how did they do?

The first thing that I noticed when unboxing mine was that although it came in the standard book-style “forever mint” packaging, said packaging felt lighter and less substantial than previous releases. Hefting the box and weighing it against my Sue Graham MPC, it definitely seemed like the material was lighter. Unfortunately, when I opened the front “page”, there was an immediate and glaring problem:

Like previous Alpha MPC releases, it was shipped in fighter mode – but the Battloid fists hadn’t been folded in, and had been pressed between the bubble packaging. That “oh no, not again” feeling started in my stomach. And sliding it out, there was more bad news:

Even Veritechs get kneecapped by loan sharks

The knee covers were popped off, and worse, one of them had a crack in the gold joint. Oh, I was definitely starting to feel disappointment. But I kept on, and went for the first transformation to Guardian mode… where immediately, the hatch behind the cockpit fell off. At this point, the cats in the apartment were subjected to a few choice curses.

With all of these problems literally out of the box, my first transformation of the Alpha was the opposite of rose colored. I was not happy, not pleased, and pretty annoyed. But after a few days, (and getting the popped-off hatch back on) I cooled off, and I realized that it wasn’t the same old story.

The first thing to note right off the bat is that this is a far more durable Alpha fighter. Is it the one that you can let your more-cautious friends transform? Time will tell, but if a visitor to my home casually picks up this release, I won’t be doing a slow-motion “nooooooo!” dive to grab it out of their hands. What do I mean by durable?

I’ve been able to easily get the landing gears out, and easily have it resting on the wheels near my work desk. The missile hatches are tight, but not brittle. Don’t force them suddenly open, and you should be fine. The joints are nice and clicky, and rotate very well, and the feet pose well, too. And for those of you that studiously apply all of the stickers, some of the designs are painted on (wing and tailfin stripes), and painted on very well – and have been updated with Expeditionary Forces logos, to boot!

En guarde, Invid & Haydonite punks! I have missiles and now I can launch them! 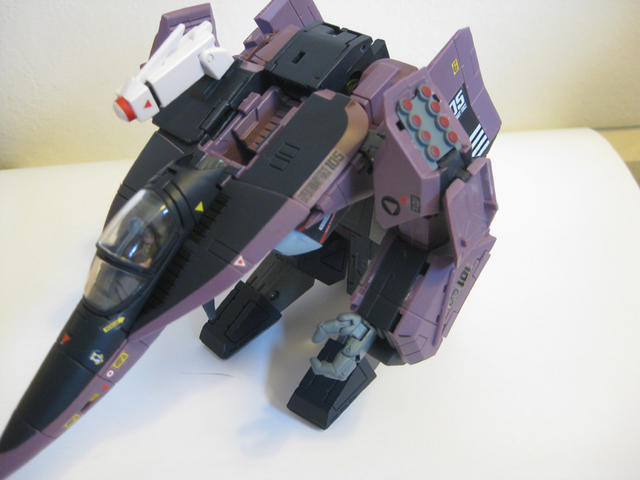 My only remaining gripe that can be applied to the entire line is the gun: It’s the same gun that shipped with the Sue Graham MPC Alpha, designed to fit over the “claw” hand of the Shadow Veritechs. But the Maia MPC has the full-five finger standard Alpha Battloid fingers, making posing with the gun difficult, if not impossible. An odd choice, and one wonders about the logic behind it.

Some would argue that Toynami has a lot to answer for. Others will make the case that in a topsy-turvey world economy, we’re lucky to be able to get the quality we can at the price provided.

I can’t say that one or the other is right, but I can say this: Toynami, you’ve taken a step in the right direction with this release. A few more improvements between now and the Marcus Rush MPC, and you can truly stand proud.

16 comments posted
So many toys fall through

So many toys fall through the cracked, thanks for the in depth review. I won't buy one until you, Atom or Josh approve it like the Beta.

And good luck with the cats... btw I like the purple-ish color...

For a job well done! Nice diction throughout the review and many details were covered. I think you're a more than capable reviewer.

Personally, after getting two bad Veritechs and two very, very bad Alphas, I am done giving Toynami money for this toy. Obviously they still need to recoup for all that development money.

If they really wanted to fix it, they'd completely re-do the arms and legs, and make sure the thing can transform into Fighter mode without the arms on top flopping about. Until then, I can't get behind it.

I am still kicking myself for not getting the old Gakken one when I had the chance, and SushiSpook, if you don't have one, that's a great toy.

excellent debut! I was eager to see how the second release came out. Keep 'em coming!

Nice to see that they have stepped up quality. My Alpha is being sent back this weekend (one of the green VFA-6I) after the quality being so bad I couldn't stand it anymore. My Green Beta fighter is sad and lonely, and will stay that for a long time, if not ever.

After owning my indestructible Gakken version, I thought, gee, let me buy the Aoshima version(pretty much same as regular toynami version with slight updates) without reading any reviews. Got it, opened it and stabbed my face for buying it. Absolutely horrid. Cracked legs and arms out of the box, crumbs falling out of box but guess what? At least the factory worker decided to GLUE it back together before shipping it out. HLJ assured me that this wasnt a resold return item and I trust them. Told me to return it but I wasnt even down to even bother, what a waste. So that is indeed the very last Alpha I ever buy from Aoshima/Toynami. Id get the CMs but they look weird to me

I've got all 3 of the large Gakken versions (in varying states of quality, none quite mint), and the 3 versions that only go from Armo-Diver to Legioss mode. I know there's another version that does all 3 that I had as a kid, but the way the wings had to come off and on during transformation ensured that their days were numbered (in one case, it wasn't days, but hours).

Even with that, it's clear that I could probably use them as a melee weapon for home defense. I know many people have opined that someone would snap-up the molds and re-release them, but who knows where the molds are, and the development costs would be pretty huge for such a gamble.

I'm with you on the CM's - they're crazy durable, but outrageously expensive and the proportions are far too cartoonish. Putting on side by side against a Toynami/Aoshima, it just looks *off*. I will say that the CM's Beta version transforms buttery smooth, like it almost *wants* to transform - but again, ugh... the price is off-putting.

My love of purple and the Legioss design isn't strong enough to make me want to buy this despite its flaws. Poor Armo-Diver, you're even worse off than gerwalk mode.

I wish my first review was this good!

I do own this figure,but like the other comments, seems that i've been shortchanged by toynami....The last that i got from them that i would have no complaints is the 25th anniversary voltron...This figure though, has a lot of defects..sad to say my figures foot slides back down and the hands are not sculpted right..the flaps for the missile flap came off when i slowly opened it up..such a shoddy performance for a supposed to be limited figure...

Guys, thank you for all the kind comments - I really appreciate it!

My focus is pretty much on Macross/Mospeada/Robotech, so I'm not sure how many reviews I'll churn out in the future, but I hope I get the chance!

BTW - Apologies for the quality of the pictures (especially the first fiew, showing the flaws as I unboxed it). At that point, I hadn't even considered writing a review and was hastily "liveblogging" my unpacking to a couple of forums. I've got a camera tripod on order, and I'm gonna pick up a small studio box to take better pics in the future. Once I get the tripod, I may consider tossing up a video review as well.

Thanks again for the nice comments - it's a good start to my Saturday!

Haha, dude, the picture quality is already leagues ahead of anything I could do, you shouldn't be apologizing.

Great review!
I have to point out, though, that you transformed the arms wrong in plane mode. This is a common error, due to the fact that Toynami often shipped these things incorrectly transformed. When I opened my Scott version, the hands weren't in the arms properly, and the jet covers were popping up.
When you transform it into plane mode, you have to make certain of two things: 1) carefully transform the arms first when going into plane mode and 2) make sure the legs are pushed all the way forward/up (toward the intakes).
Carefully pre-setting the arms allows you to know how far forward the legs should be in plane mode. When they are alligned properly, there will not be a gap between the shoulder and the forearm, as in your picture. That is, of course, until you touch it, and it will promptly pop out.
Such potential for one of my favourite mechs.
Again, excellent review!