When Hasbro raided the Diaclone and Microchange catalog to assemble the Transformers, it left a few choice cuts on the table. Takara released three entries in its Gun-Robo Microchange line, but Hasbro re-purposed only one of these, the P-38, which would become the iconic Megatron character . For whatever reason, Hasbro selected the ugliest mold. While Megatron holds a dear place in the hearts of TF fans, one can’t escape the fact that the actual G1 toy was a homely, awkward thing, scarcely deserving of its elevated status. The P-38’s brothers, the Magnum 44 and Browning models, were superior toys.

The Magnum remains a rare and expensive toy. The Browning was released on a limited basis in Japan as a Transformer, but is most commonly available as a bootleg under the King Dam label. I own the King Dam version, and it’s awful. Given the exorbitant prices commanded by the originals, I had made peace with owning only an inferior simulacrum. But while perusing Tformers recently, I noticed a solicitation for a slick-looking new boot of the mold, offered at a reasonable price. Holy god am I glad I bought one.

While this piece is technically a bootleg, I choose to think of it as an unlicensed reproduction. There is nothing bootleggy or knockoff about this product. It’s a high quality replica of a great toy.

The plain brown cardboard box is a sly nod to its ‘non-official’ status. The illustrations and graphic design are nonetheless sophisticated and handsome. 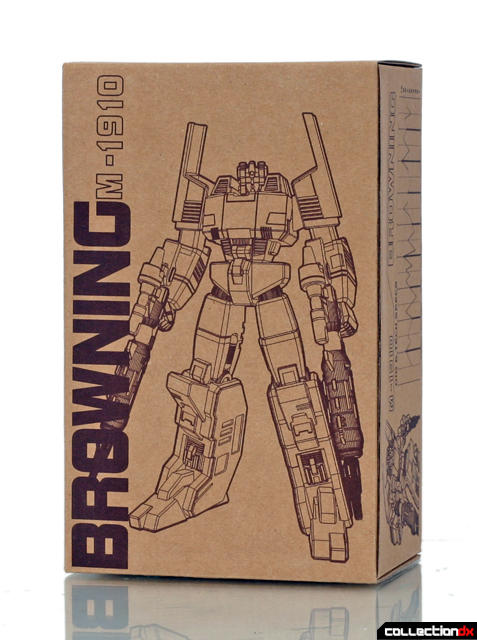 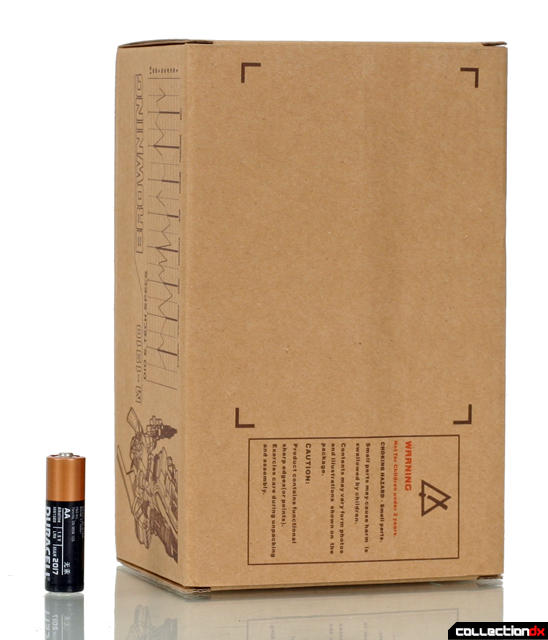 Inside, a luscious styrofoam coffin, two decal sheets, and an instruction sheet.

Accessories include two chrome guns and a sprue of bullets. 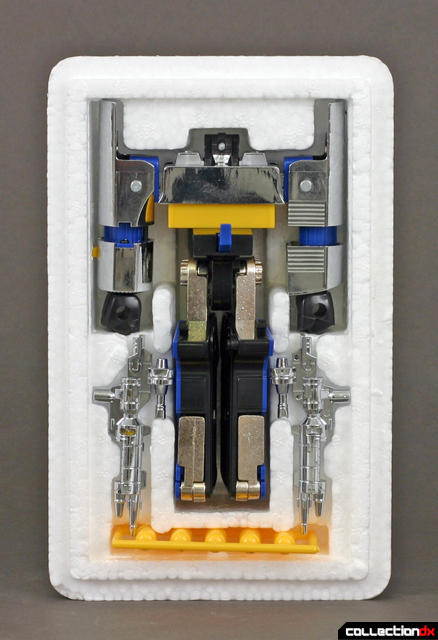 The two decal sheets offer subtle variations for autobot or decepticon livery. The Browning is available in both red and blue variants, expressed in leg and arm plastic accents. I chose the blue for its slightly more Diaclone flavor, though I believe the original was red, and the Italian Gig release was blue. 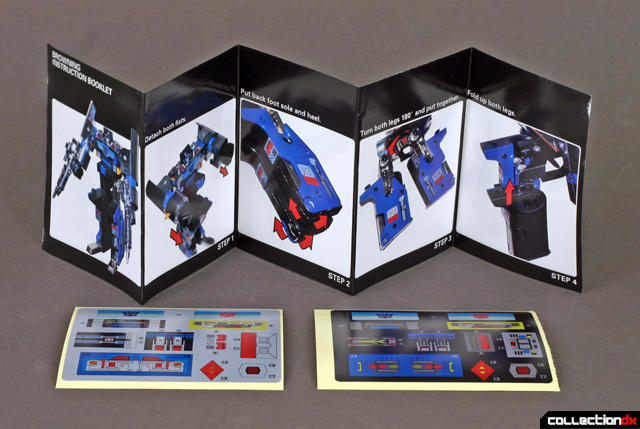 The application of foil decals really elevates the piece. Really, look at this beautiful, glorious bastard. Is it shameful to salivate at the sight of a beautiful object? 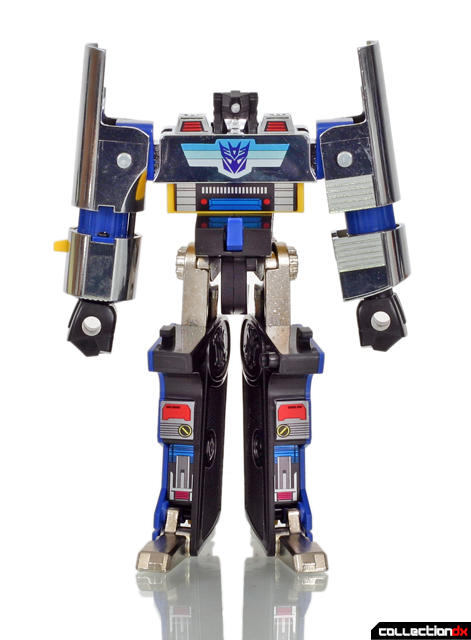 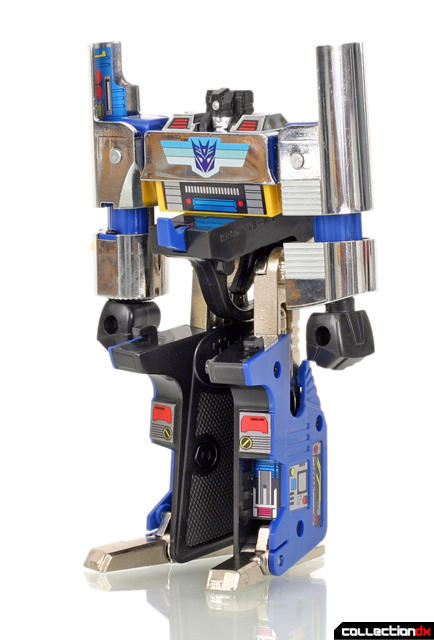 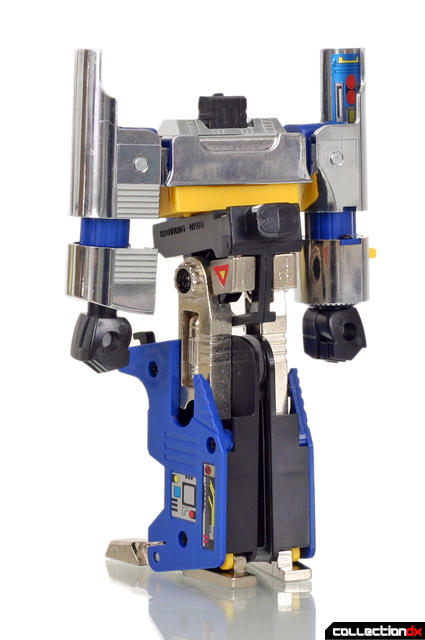 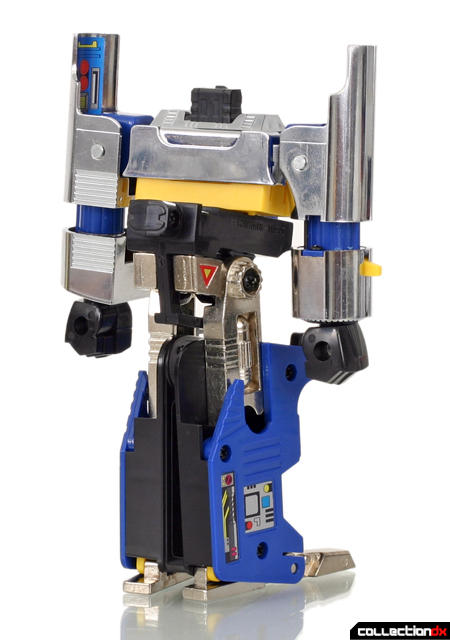 I’m really stirred by the beauty of this figure, more than I expected. While I sort of liked the King Dam KO, this version is far, far superior. The Kind Dam has a doughy, sub-par sculpt, particularly in the head, and crudely tooled diecast, while this version nails every detail. 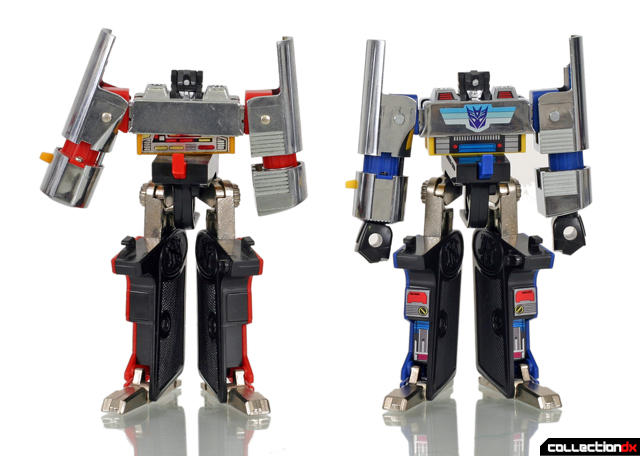 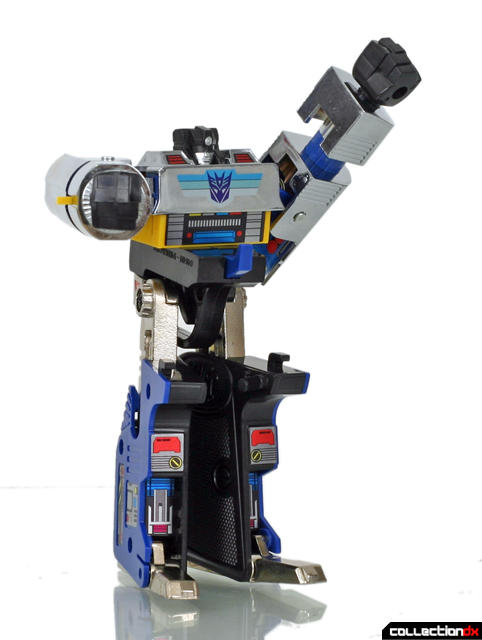 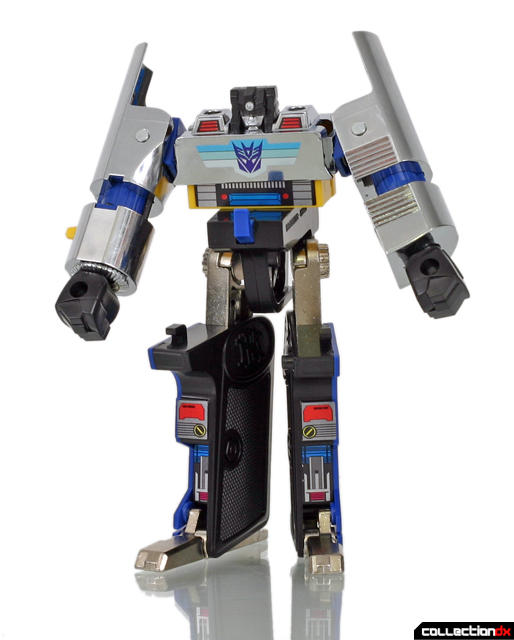 The metal hips and thighs are crisp, as is the head sculpt. Diaclone & Microchange were among the best robot toys ever made, and this version is totally consistent in fit and finish with the originals. Every joint is tight. Tolerances are precise.

The gun accessories activate the figure. 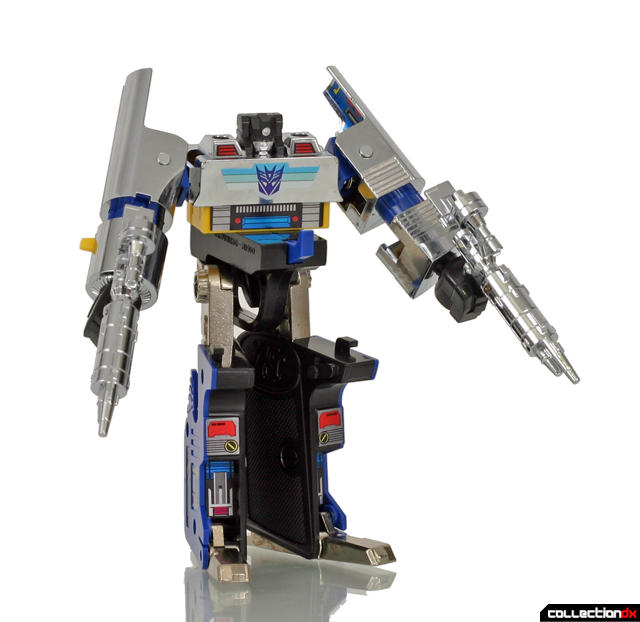 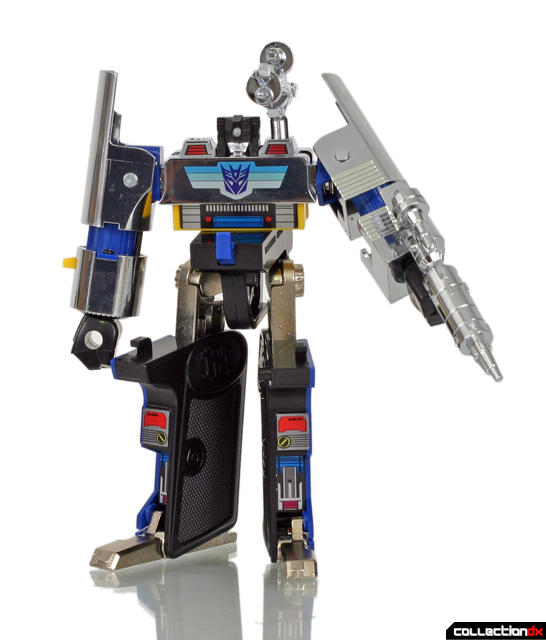 Transformation to gun mode is fun, complex, and conceptually similar to the Megatron mold. The resulting gun is noticeably more compact than the P38. The chrome finish is excellent. 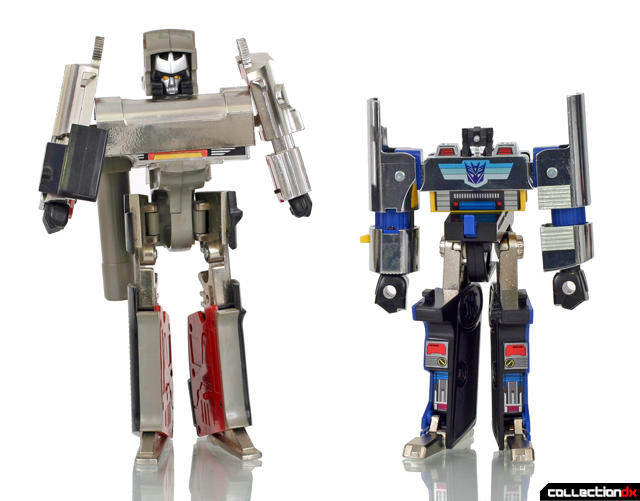 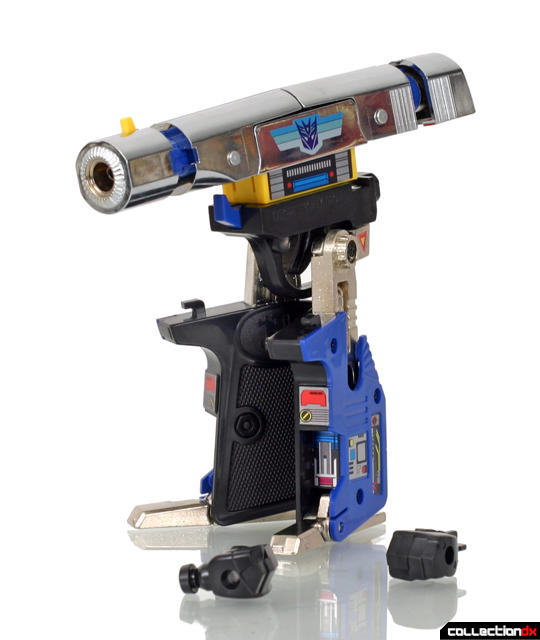 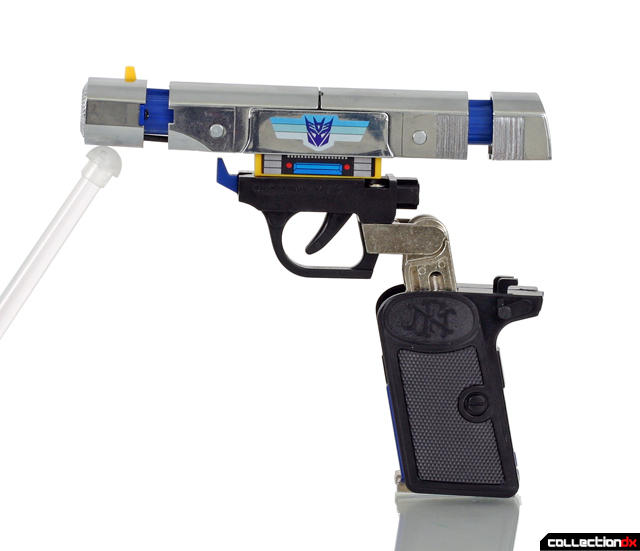 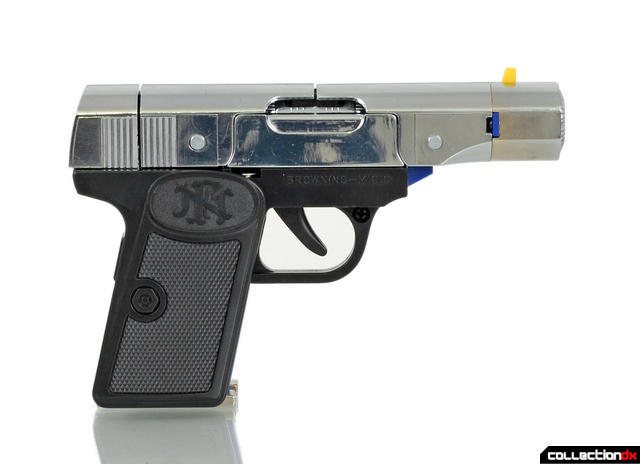 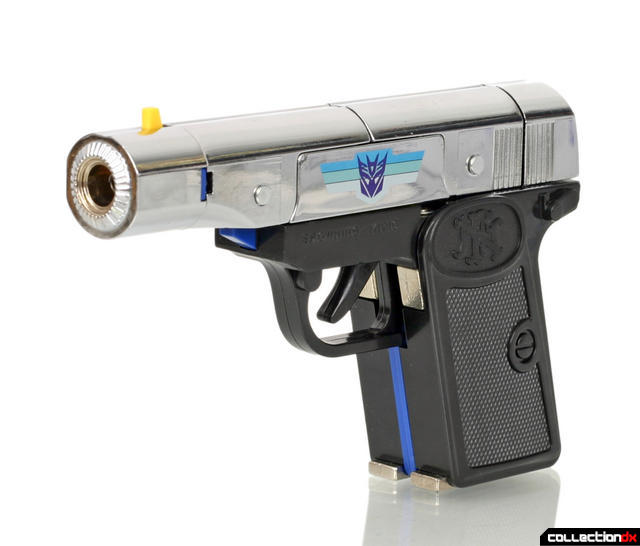 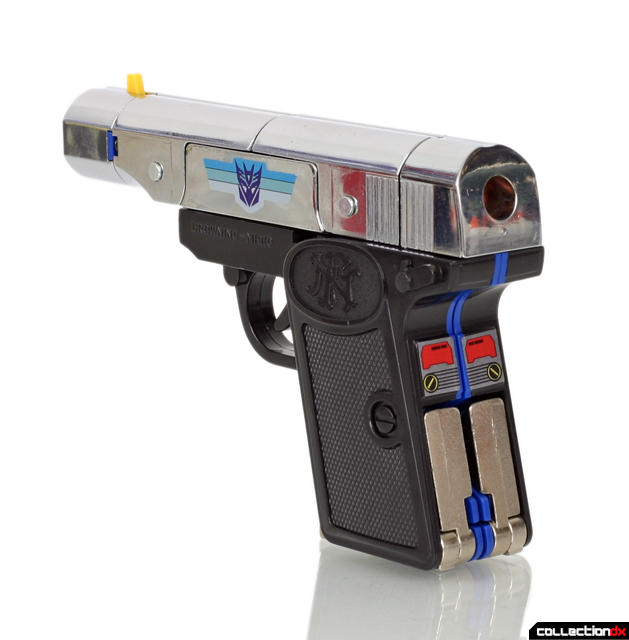 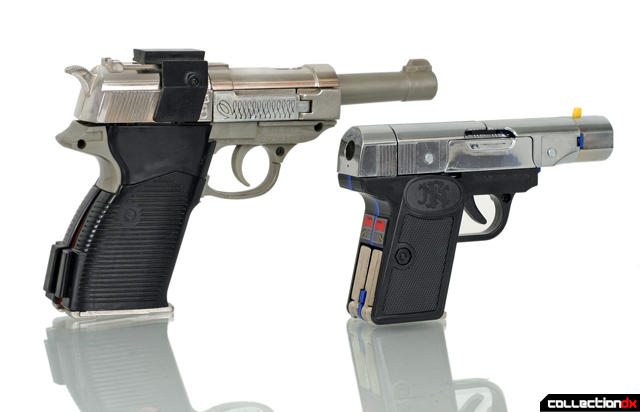 This is a rare beast: an exquisite bootleg. It’s exactly what a bootleg should be: not an inferior, slapdash imitation, but a quality reproduction of an object unavailable to most fans. Mysterious producer, please keep making such things and I will keep buying them. How about that Magnum? 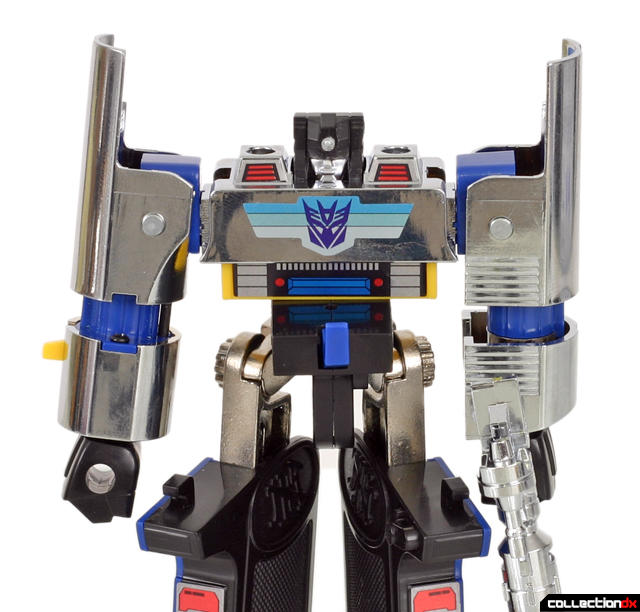 Though ugly, there's certainly logic behind choosing Gun-Robo UNCLE version for the role of the maniacal Megatron: his accessories (the scope, silencer, and stock) were enough to bump him to a more comparable price point to his heroic Convoy counterpart. That he's a bit more self contained than Browning or Magnum might have helped a little, but then again, the 84 line was full of detachable fists and aborted rocket punches.

But Browning, that is certainly a nice looking robot and I'm not surprised Takara chose to dip into their Diaclone pool and put it in a later show. The shoulders give a nice silhouette, and the smaller proportions means his legs look thicker and better suited for the rest of him. He's definitely got some nice looks... so it's almost a shame he got made into a kid appeal tag-along character rather than a more "regular" Decepticon... but that's neither here nor there!

Beat me to it! I just got mine in the mail and was thinking we needed to cover this guy. It's a fantastic reproduction of a wonderful little figure. I'm thinking I need to go back and grab the red version now, as well. All I've ever had are the Kingdam bootlegs, so having a properly colored and minty condition option now is just great.

This is gorgeous! I might have to get one now! Man, I just can't get over how stunning this guy looks!

I was never able to afford the original g1 transformers version, but this one will do. Anyone know where I can buy it online?

Where do I find this an how much is it? I can never get the original so how much does it cost?

I bought the red because it was limited to 100 pieces supposedly and will be getting this one next. I agree, its an excellent figure done with a lot of love who ever made this. Recommended

I got this guy when a kid. I loved him, played with him for years.
I can't remember what happened to him, but I still have his guns.

Great review of an awesome figure! I purchased the blue version and it just arrived yesterday. I am very happy with everything about this figure. It exceeded all of my expectations. Highly recommended. I liked it so much that I just ordered the red version today. I hope whoever made this will make the magnum gun robo too.

Just ordered a red one. I have the Kingdam and the Takara. This will go great along side them. I checked eBay, someone is selling one for $200 vs the $56 with shipping from Acestoystore. A lot nice cheap KOs. Reminds of the other site that Hasbro forced to shut down.

Awesome toy. Especially the hip / leg engineering is pretty ingenious for its time.

Although I do feel his head/helmet sculpt lacks a sort of majestic style that 'Megatron'
does indeed have.

Great review and thanks for the ordering info. Seems like the the review helped sell a few of these guys.
I just cant decide red or blue.
I see the missiles, do the firing gimmicks work?

Excellent review, and what a gorgeous figure it is!