Little Godzilla provided by our friends at Bluefin Distribution. Get yours at:

Little Gozilla comes packaged in a box that is several times bigger than Little Godzilla, with a window in the corner through which you can most of the  figure. Surely there is more to this S.H. Monsterarts release than just the figure... and we will get back to that later. 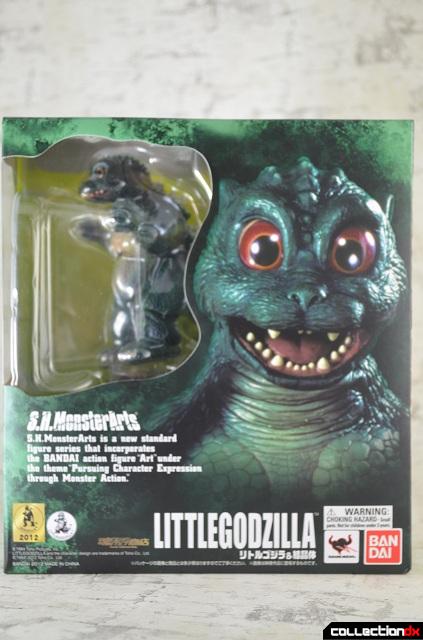 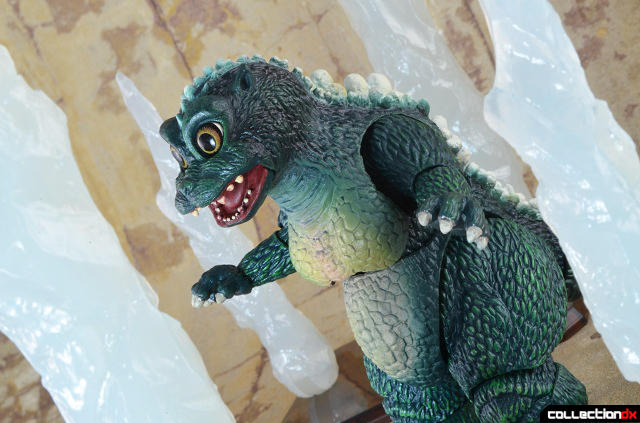 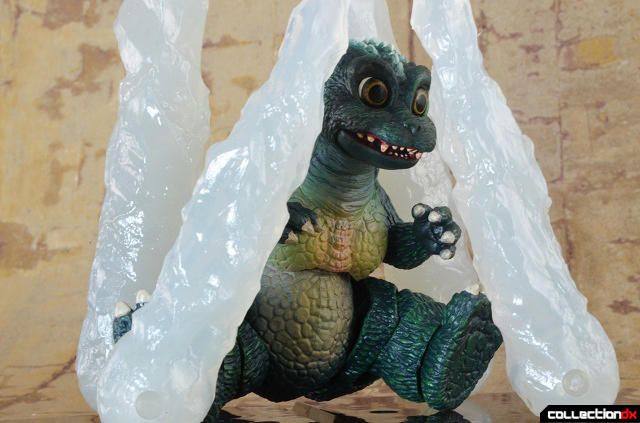 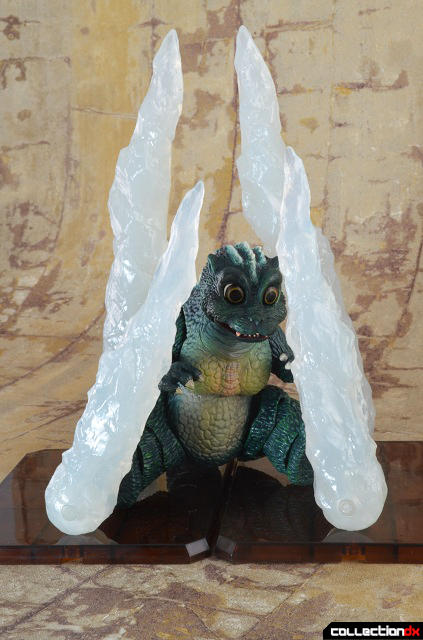 Bundled with Little Godzilla, Bandai has included four crystals which plug into the two interlocking Tamashii stand bases also included with the figure. Using these crystals, which can swivel, you can recreate Little Godzilla’s entrapment during much of the "Godzilla vs. SpaceGodzilla" movie. It is a neat effect setup. Tthe inclusion of only four crystals, however, mkes the prison look a bit sparse, as the crystal prison that Little Godzilla found himself in during the movie had many more crystals. It would have been nice if Bandai had included two more extra crystals which could plug into the third hole of  each Tamashii stand and made this display more movie accurate. Nonetheless, it was a neat touch on Bandai’s part to give a nod to this part of the movie.

Now let's check out what this little bugger is all about!

Little Godzilla is as cute as button!  His small proportions make him less menacing than his later versions. 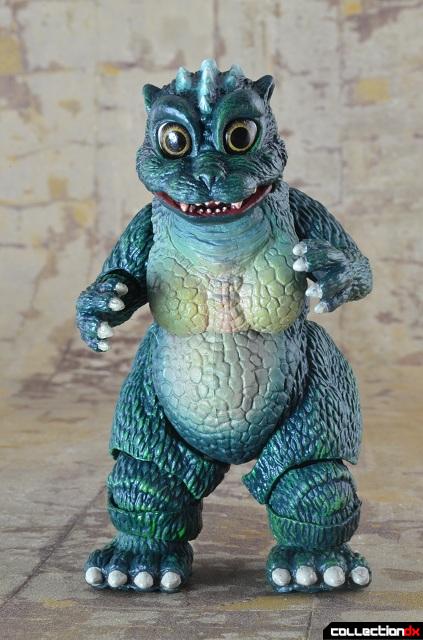 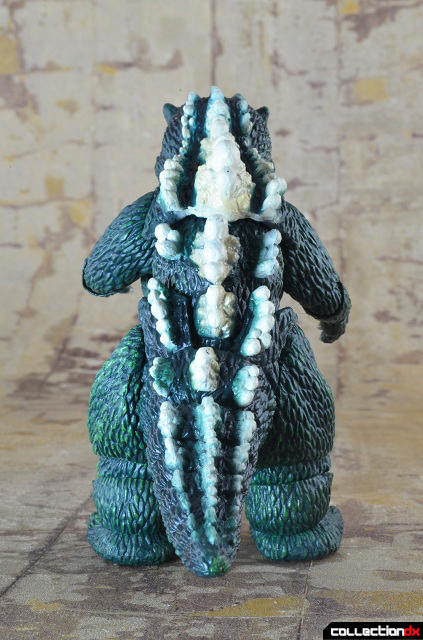 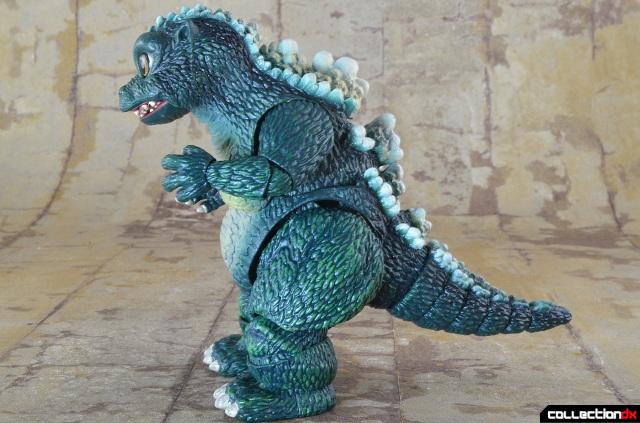 His face has more depth and details than the softer features of the Little Godzilla in the movie. 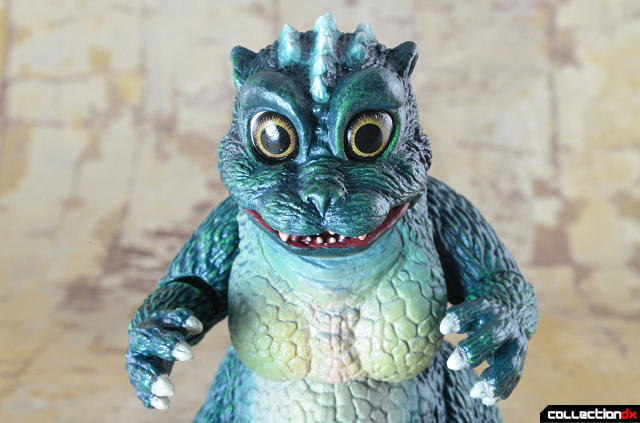 For some reason the sculpt of the pectorals on this figure combined with the cut that separates the top and bottom parts of the torso  sometimes makes  it look like Little Godzilla has some little boobs.

As for the paint apps on this figure, they are a bit of mixed bag.

The dark green looks great on the scales of the figure's body. 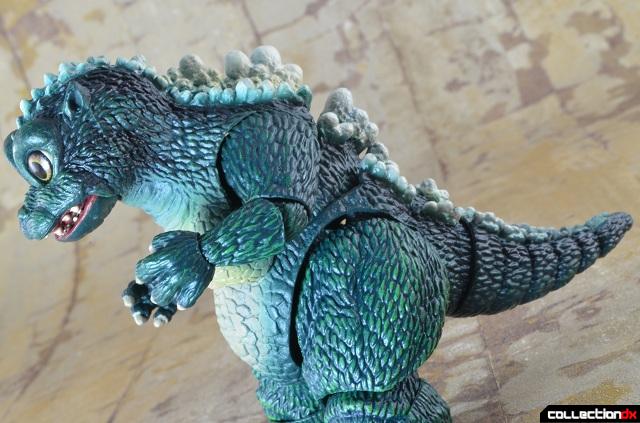 On the other hand, the color on the chest of the figure could have used an extra coat of paint or two. The beige color used for the stomach of Godzilla is lighter than the one used for the suit in the movie. Because of this you get a glimpse of some of the green peeking out from underneath. The beige paint also stops at the bottom of the neck; whereas in the movie, the color of extends up to the top of Little Godzilla's neck. 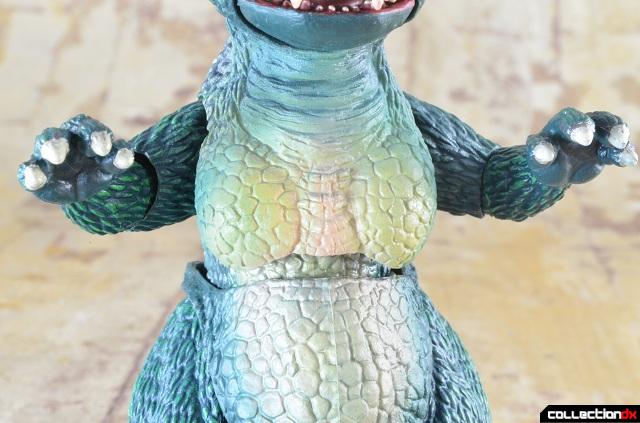 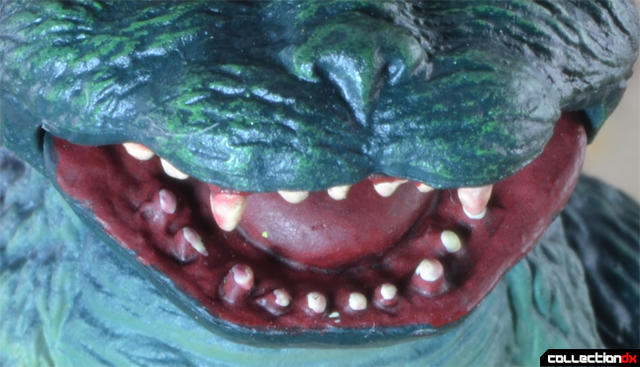 Now lets check out how this little guy moves.

The mouth of this figure opens, revealing Little-Godzilla’s not-so-pearly whites. 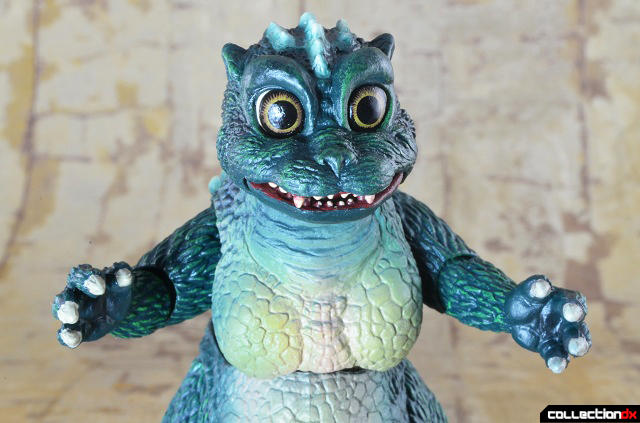 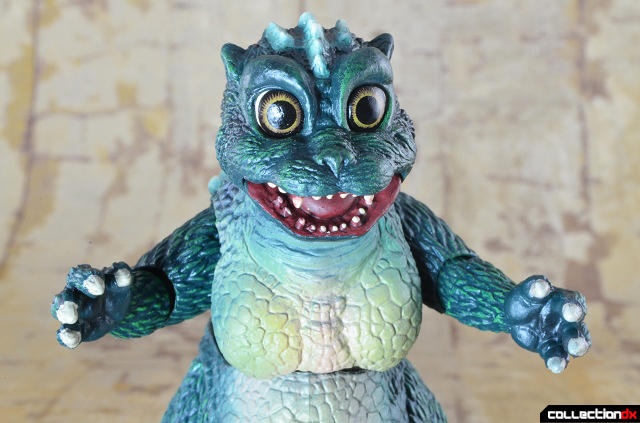 Little Godzilla has an ab crunch on his upper body, which allows some movement up and down but cannot pull off much lateral movement. 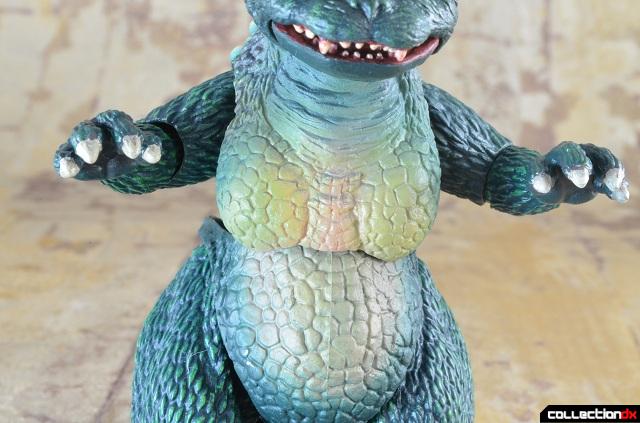 The arms have double jointed elbows that are a bit restricted by the sculpt around the elbows. The hands are on ball joints, which allow them to rotate 360 degrees. 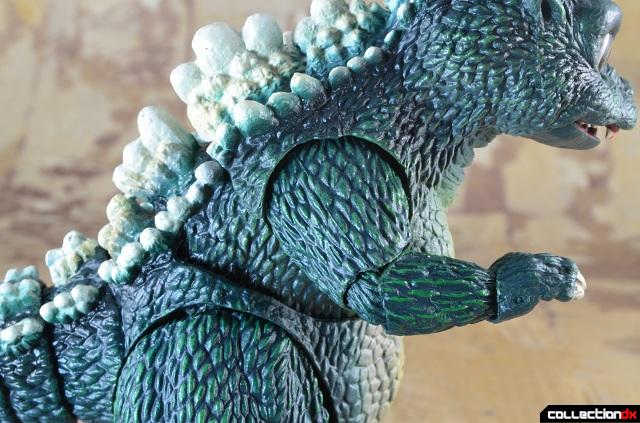 Moving down to the lower body of Little Godzilla, there is a single joint at the hips which allows the leg to move forward about 90 degrees.  This allows Little Godzilla to sit down. 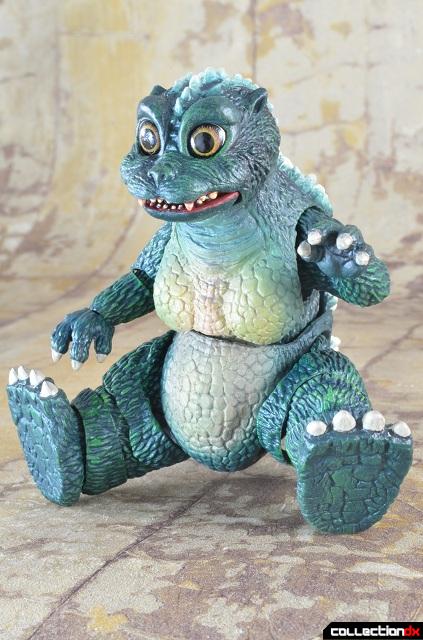 The legs cannot move backward much, however, as the sculpt of the tail acts as a stoping point for the back of the thighs. 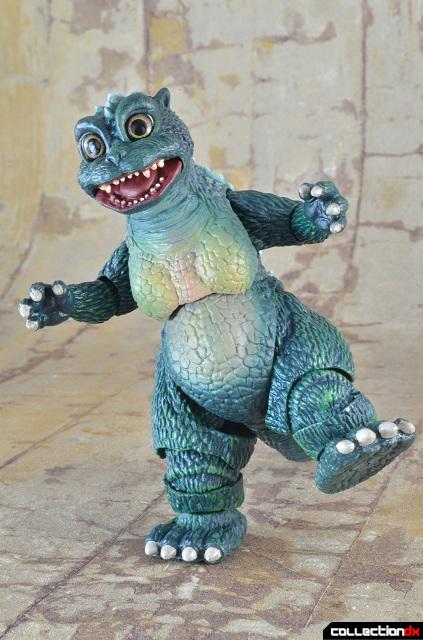 There is a single joint at the knee that acts like a knee joint, but also alows the lower legs to be rotated around at the knee. The feet, like the hands, are on a ball joint which allows them to move 360 degree. 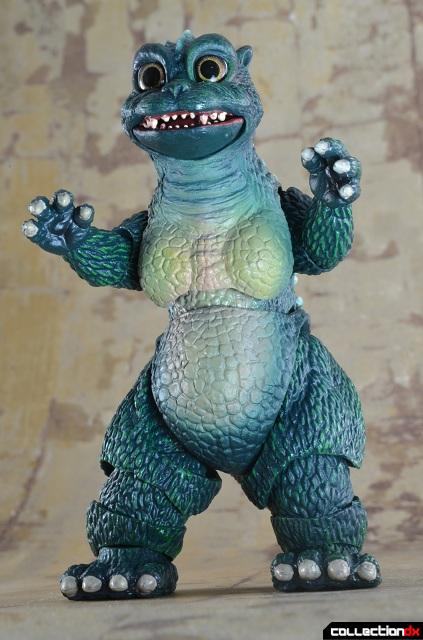 This is a great little figure, with a good deal of articulation. Sure he may not have as much articulation as some of the bigger kaiju in the S.H. Monsterarts line and some of the joints are hampered by the nature of the design of Little Godilla's suit. That is okay, because he can do what Little Godzilla does in the movie: look cute, act defenseless, and be the comic relief character. 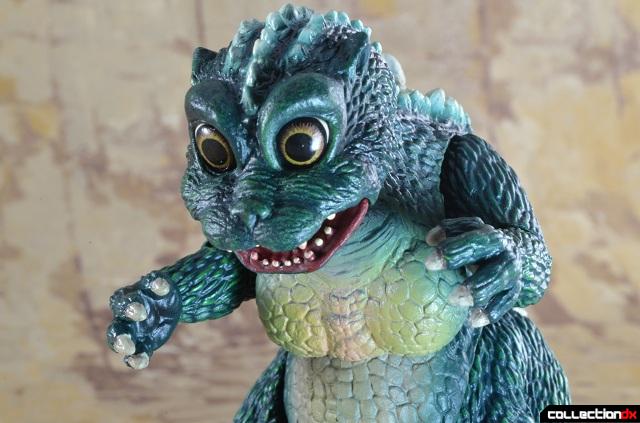 Keep trying Little Godzilla! You will get that attack down one of these days!

Yeah, that one is really cute.

He's more of a kiddie mascot than a kaiju.