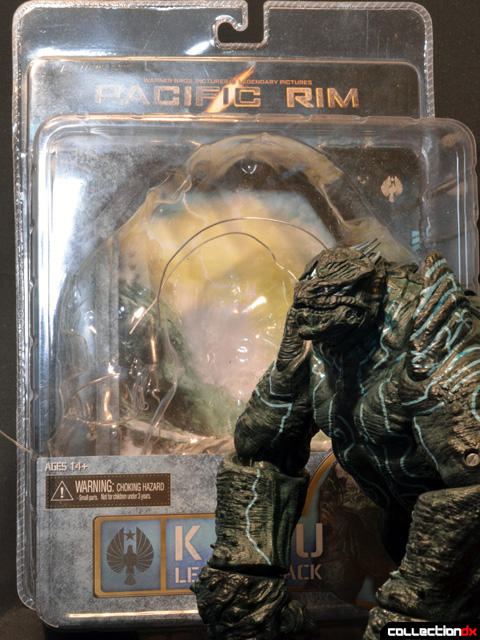 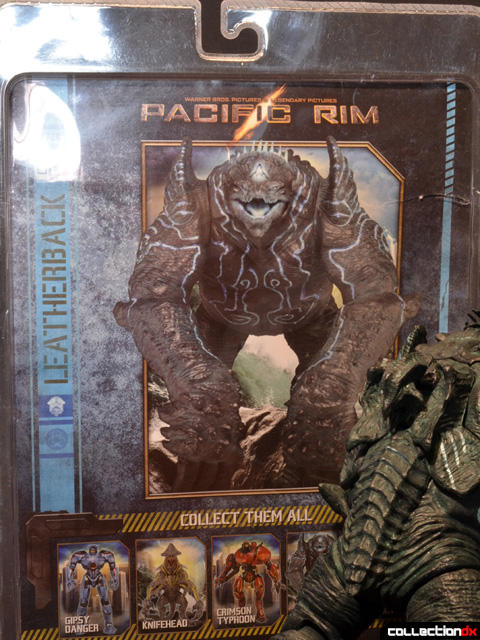 Leatherback is the second kaiju released in NECA’s Pacific Rim line, released as part of Wave 2.  Leatherback is a massive figure that comes in an oversized blister.  One wonders how such a significantly larger figure can be offered for the same price as the jaegers and the tiny Knifehead from Wave 1. 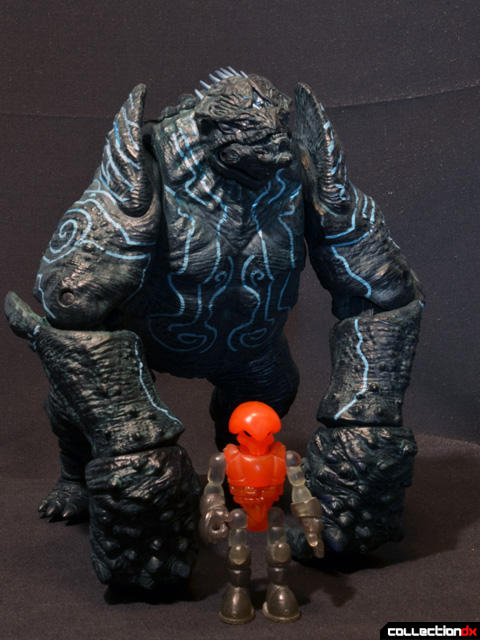 Leatherback stands around seven inches tall and is a hefty figure. He’s broad and deep, with huge parts for the arms and torso.  Leatherback feels like he is made of a harder PVC than the jaegers, but that could just be a result of the big, solid parts. 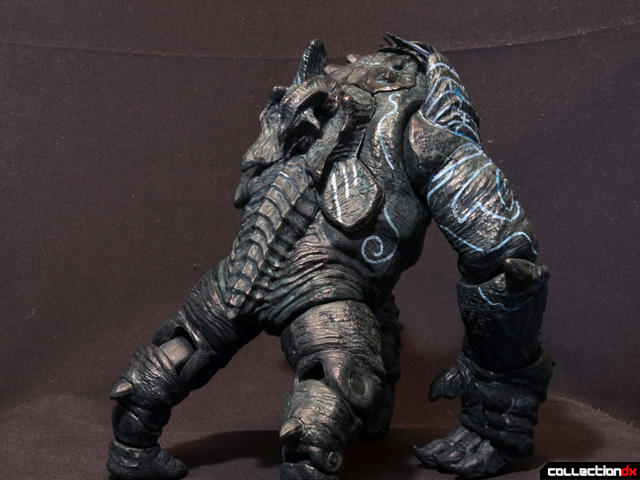 The sculpt is generally good, with nice details and texture.  There is a bit of a gap around where the armored back plate attaches, but that’s not a huge deal.  What’s worse is the gigantic, ugly cut joints all over the figure.  The multiple knees and elbows are especially clunky, making no attempt to work with the sculpt.  If the articulation was effective and made for a dynamic, highly posable toy, that might be okay.  As we’ll see, this is not the case. 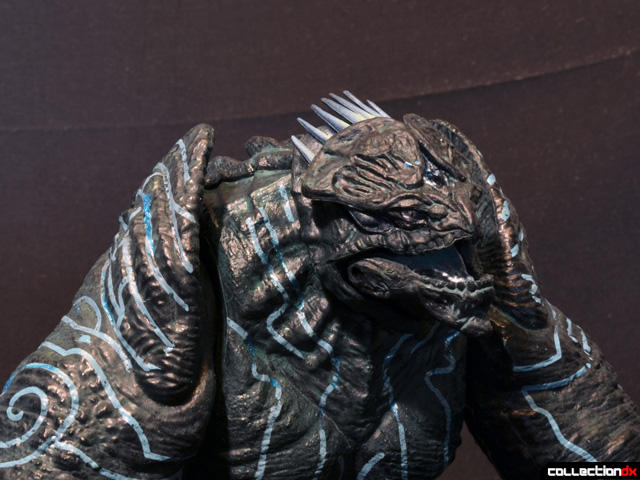 Leatherback’s portrait is well rendered, with a posable jaw.  The texture work between the flesh bits and the harder, armored bits is nicely shown off here.  The ‘hair’ is made from softer plastic so they should be plenty durable.  The neck joint only swivels. 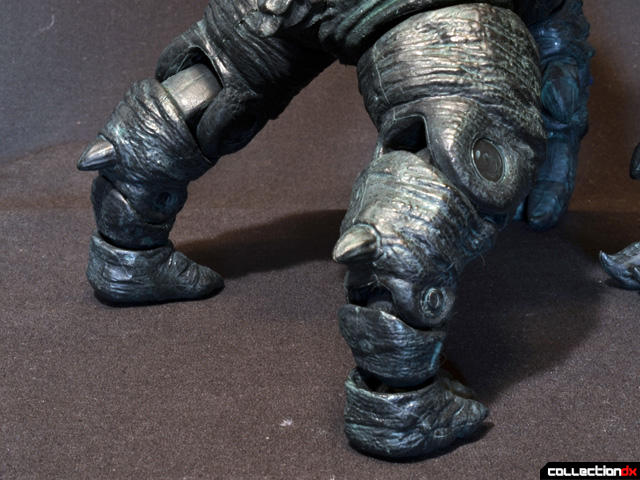 The legs feature multiple joints that are mostly useless.  The hips have limited ball joint motion, with two hinge knees and ankles.  All these joints give the toy a little bit of expression, but have to be left in a pretty neutral pose for the toy to balance. 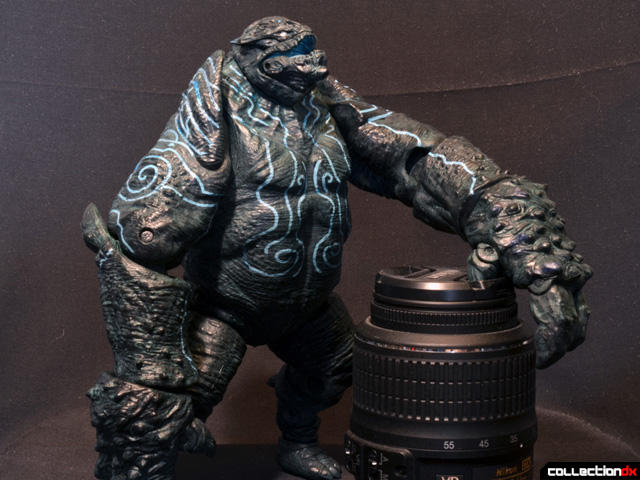 The kaiju’s bulky, simian stature makes for a toy that cannot stand on two feet.  Leatherback can only stand using his hands for support. 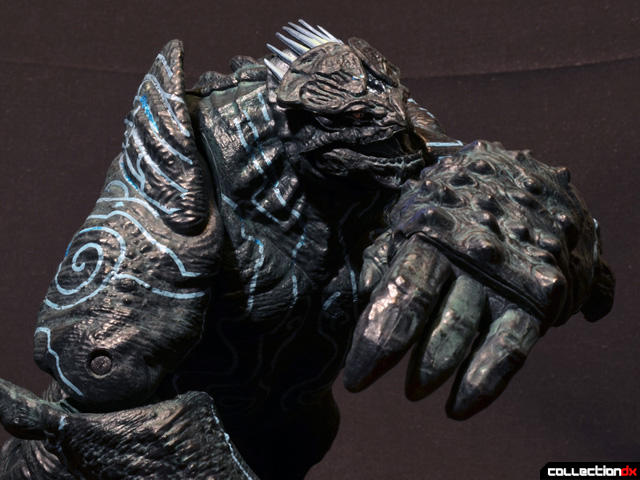 Leatherback has swivel shoulders and hinge elbows that only bend inwards, further limiting useful articulation.  If an enemy comes at Leatherback from the side, the kaiju is out of luck. 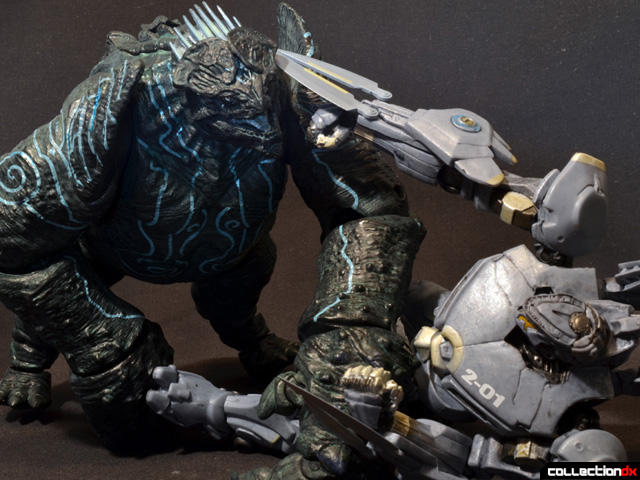 The limited articulation makes it hard for Leatherback to interact with the jaeger figures, but you can still pull off some fun battle poses.  Striker Eureka seems to be having a lousy day here. 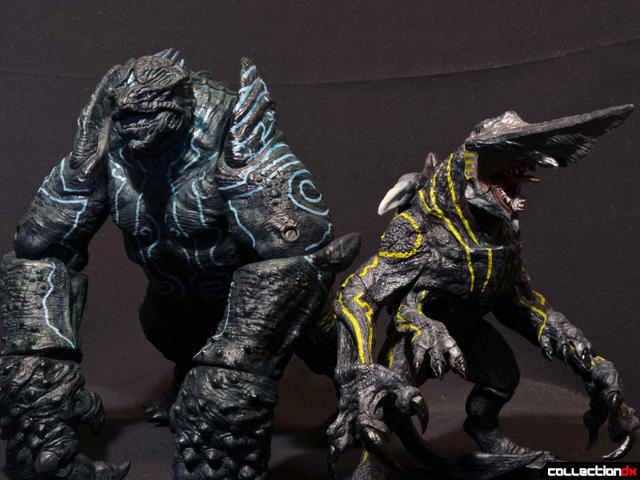 Putting Leatherback alongside Knifehead reveals two well detailed and incredibly unsatisfying toys.  At least Knifehead could pose his arms out to the side and stand on two feet.  Leatherback can do neither.  It’s pretty clear from the design of the kaiju figures that NECA wanted to make fixed pose statue figures and then cut in some joints after the fact.  Based on the end results, I would have rather the kaiju remained fixed pose and be cheaper.  Better still, they would have made great cheapie Bandai vinyls like their Godzilla and Ultra-kaiju.  For twenty bucks, they are decent looking but ultimately boring toys. 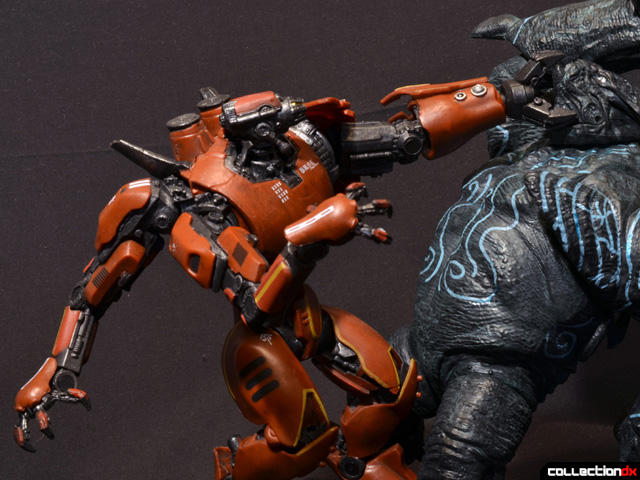 Leatherback doesn’t look so bad on the receiving end of a Crimson Typhoon smackdown, though.

Ugh.... I thought this would be the one that would stand out from the pack but I guess not. NECA strikes again....
Looks like I'll be in no hurry to break mine out of their cruddy clamshells.... BUT.... I am digging the 18 inch Gipsy Danger. For under $100 price point and for a NECA toy, it's pretty solid (and it STANDS on its own!). Looking forward to a review of this bad boy down the line...