Large Martins are the largest WWR bot released so far. Martins are used for artillery and anti-bot support.  They were one of the first bot designs 3A released, and helped the company earn their reputation for huge, gorgeous, playable robot figures.  There are two Martin variants: Large Martins feature one cannon and are available in WWR and WWRp, and Damn Large Martins feature two cannons and exist only in WWRp for now. 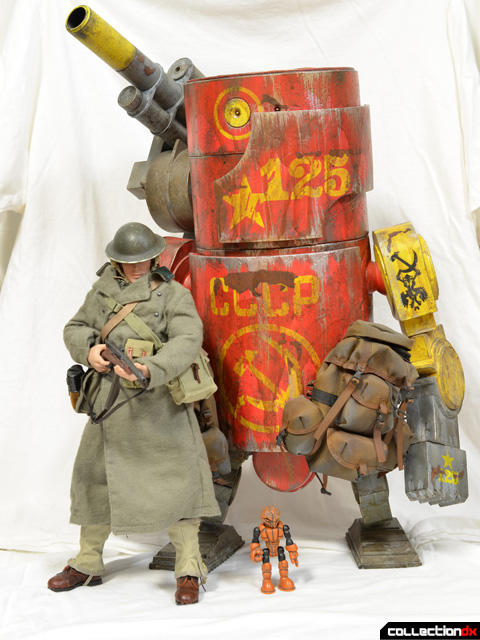 Big Red was my first large 3A bot, and is still one of my favorites.  I remember going to the Toy Karma II Japanese vinyl art show at Rotofugi in Chicago and seeing this guy on their shelf for sale.  The presence and detail were unreal, and I thought it a totally impractical and utterly lust-worthy figure.  This giant robot barely fit on the shelf at 20” tall!  I had a blast meeting kaiju vinyl artists at the show and tried to forget about Martin. 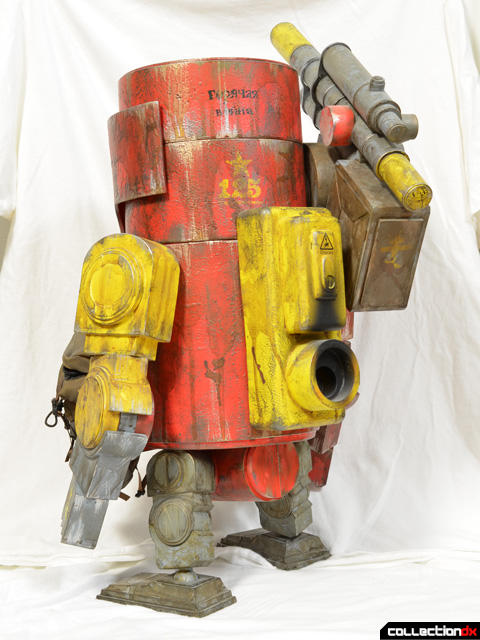 Cut to a few months later.  Rotofugi is having a Black Friday sale with a huge discount and free shipping.  I check the usual J-vinyl offerings and nothing jumps out, but then I notice they still have a Large Martin in stock.  This was before 3A really took off, and things actually stuck around in stock long enough to think about.  I worked out the price with the discount and factored in the massive savings from not having to pay for shipping, and took the plunge.  I told my mom I had purchased something kinda big, but did not elaborate. 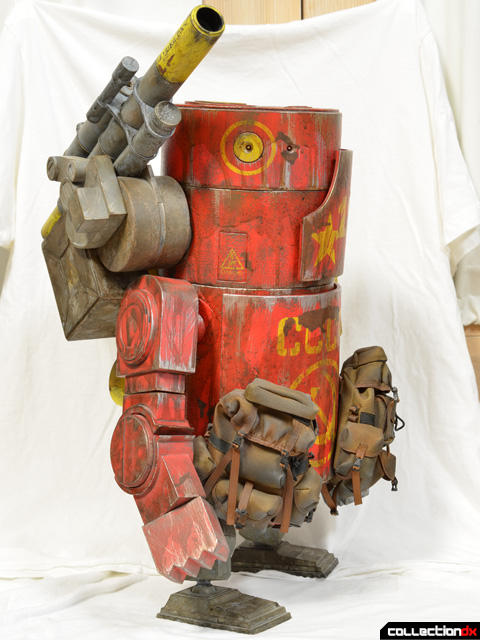 A week or so later, this impossibly huge box arrives at my house.  I don’t have any pictures of it because all my oversized 3A boxes are in storage, but we’re talking minifridge sized.   I began to think I’d made a horrible mistake… 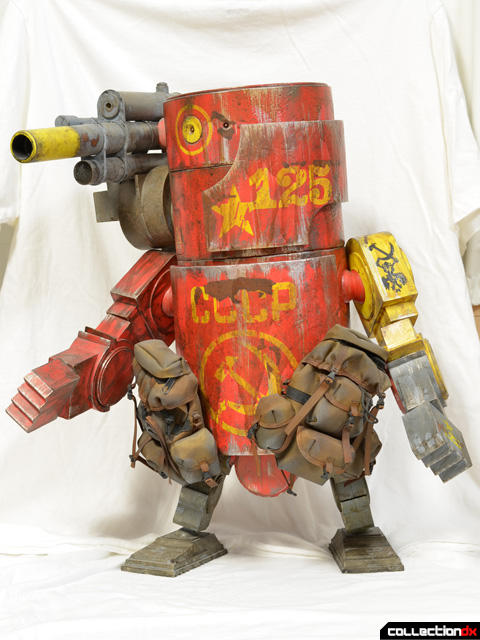 I am glad I made that mistake, because Large Martin is a fantastic toy and stunning showpiece.  As a support bot, Martin is bulky and not particularly dynamic, but that did not stop 3A from including as much articulation as they could.  The shoulders feature double ball-joints, and the hips and knees are ball jointed.  The biceps, elbows, knees, neck, and mid-torso swivel, and the gun can elevate. 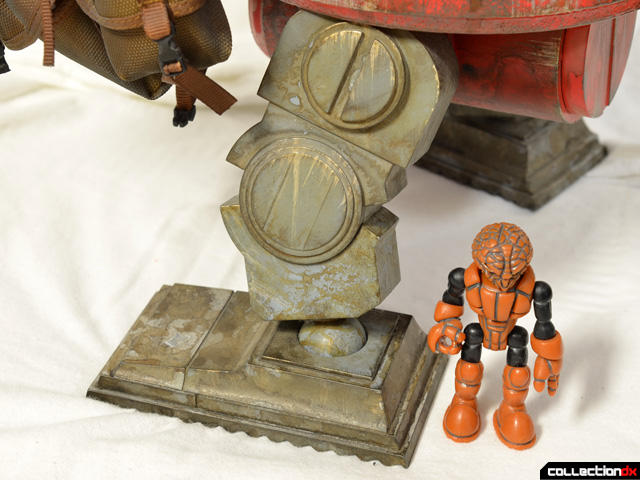 Martin’s torso is made of thick, heavy vinyl, and the limbs and structural parts of the cannon are hard plastic.  The spaced armor plates on the torso are also thick, hard plastic.  The arm joints move smoothly, but in order to support the incredible weight, the leg joints are super tight.  They feel rock solid, but make all manner of horrible noises when moving.  They are still fun to work with and have not loosened up at all in the years I’ve owned this Big Red. 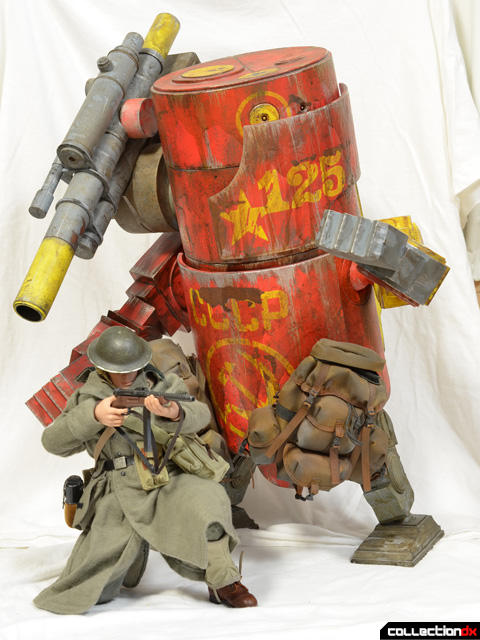 There is something about having seen this exact figure on display and then scoring it a few months later that makes it extra special to me, but I also love it because it is a damn fun toy.  When paired up with some 1/6 scale humans, the size of the robot becomes real, and everything Wood is going for the with WWR universe clicks. 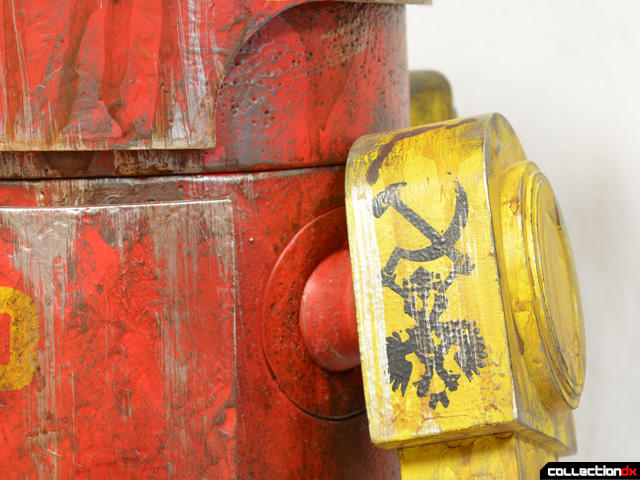 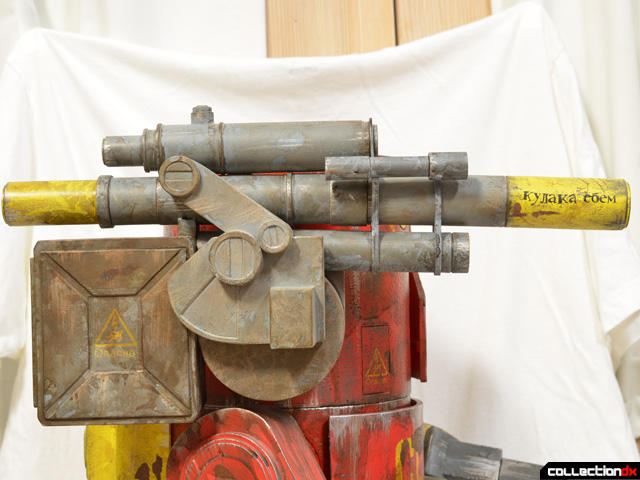 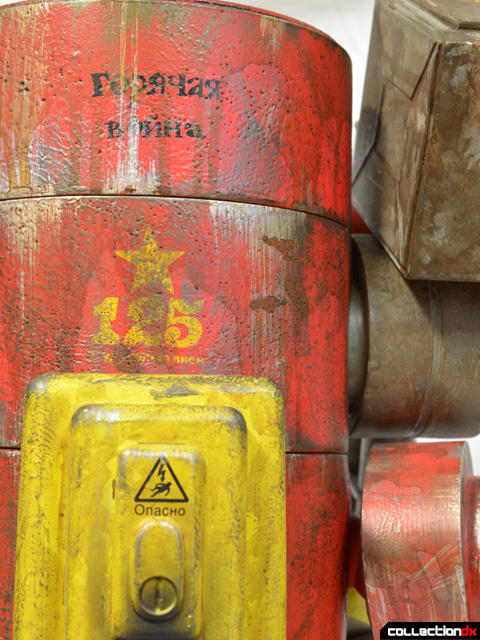 Big Red is a future-Soviet bot, featuring a striking paint scheme and all manner of USSR iconography and some Cyrillic slogans.  The decals and paint are good, but not as sharp nor refined as on more recent 3A releases.  In a way, I think that adds to this particular version, giving it some of that classic Soviet kludginess. 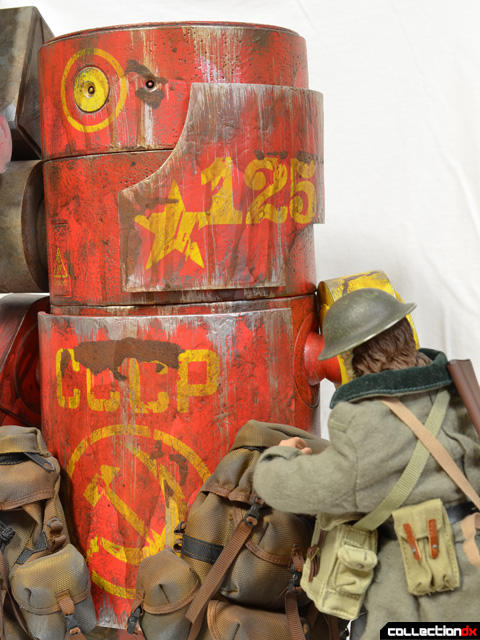 The soldier pictured is a kitbash I have been working on that combines Russian WWI and Soviet WWII details to match some WWR artwork.  Eventually, he will receive a proper 3A gasmask and weathering to better match his big buddy.  He also seems to have lost something in one of Red’s pouches. 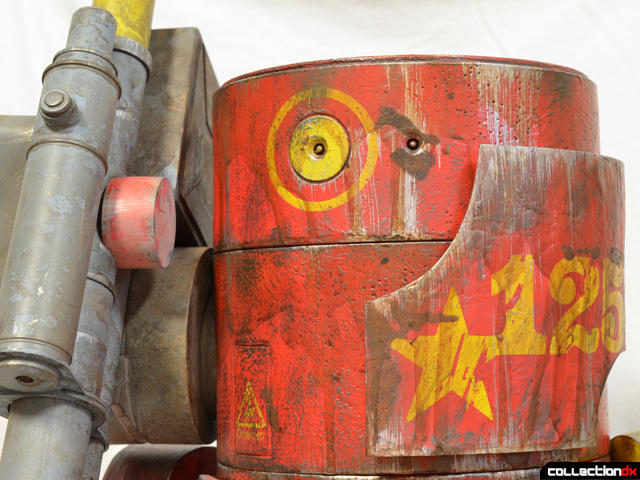 WWR Large Martins retailed for $300 when they were released, but they typically sell for twice that now, if you can find one.  The WWRp Large and Damn Large Martins, however, are much easier to find.  You can pick up a WWRp Martin for between $50 and $75 depending on which version.  Everything said above applies to those toys, since they are the same thing but half the size.  Just re-read my review, but replace all the instances of ‘ginormous’ with ‘kinda big’.  I’ll do a WWRp Martin review at some point for completion’s sake.

Ha! I couldn't quite figure out the web gear on your military figure looks like a pre-wwii/Pearl Harbor US Army soldier with a Kelley Helmet and French/Euro WWII gear....so Russian gear was close!

I bought the parts a while ago, but I think you are spot on. The webbing was definitely US. I was at the mercy of whatever parts were available at the time. He's got a full uniform under the coat as well, and I have a gasmask that I need to attach to his face for that 3A grunt look.

Those short stubby legs really don't do it for me.

Are you talking about me or Big Red!? : P

Just Got a good deal
Just picked up this version 1/6 and opened it up
Ab-saloutely stunning, Huge!! and smells
I am talking about the robot^_^!!
These 1/6 large martins Are a must have for any collection if your a robot collector