I was not part of the cool kids that got into Teenage Mutant Ninja Turtles when the original black and white comic by Kevin Eastman and Peter Laird first came out. I was like 3 or 4 years old back then. Yet in 1989, I had a Ninja Turtles themed birthday party with Michaelangelo on my cake, Raphael on all the plates, cups, and napkins, and a huge smile on my face.

The original Ninja Turtles cartoon miniseries aired at the very end of 1987, but I don't think it aired on any of the Detroit TV stations I was watching. It wasn't until 1988 when the miniseries and the first full season aired in my town and oh man, I was immediately, irrevocably hooked. It's not like I stopped wanting Transformers toys, it's more like I wanted Ninja Turtles toys more than I wanted oxygen. And there was only Ninja Turtles toy I wanted more than Michaelangelo: KRANG. 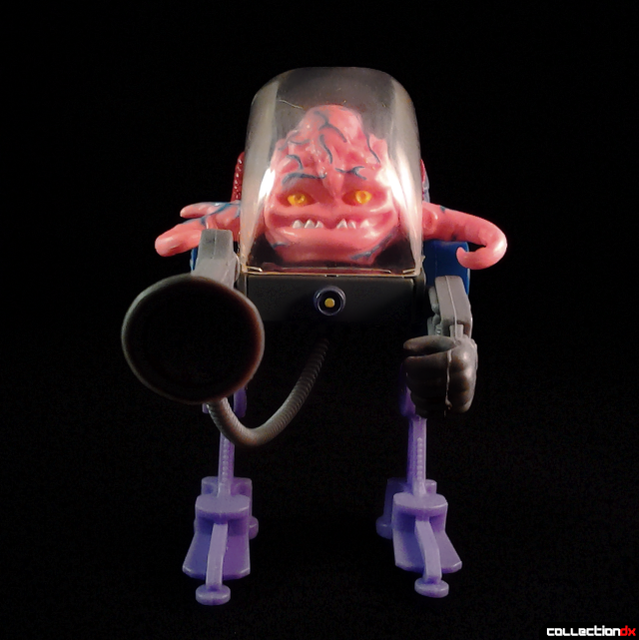 What's that you say? An evil brain from Dimension X? He lost his body and cruises on goofy wheels or sometimes a nifty looking robotic chair with legs and arms and a gun that sucks brains out of other people's heads? He drools and when he talks it sounds like he's burping? He berates evil ninja master Shredder like a cranky wife? SIGN ME THE HELL UP.

Yeah, Krang is a pretty drastic revision of the benevolent brain-like Utrom aliens from the Mirage comics, but I love him. 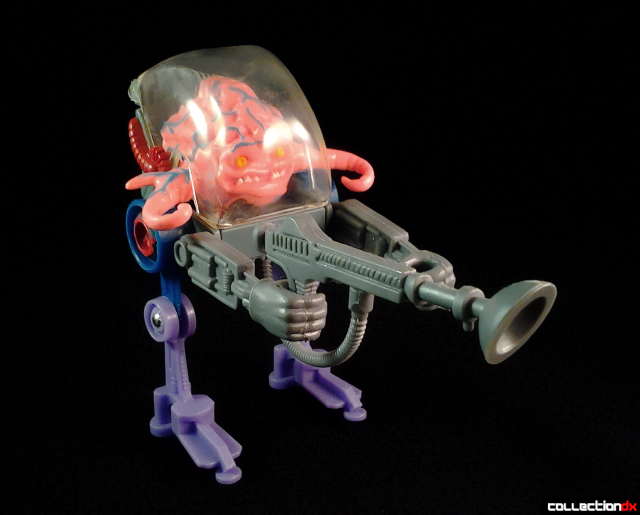 The original Playmates Ninja Turtles line started out modestly with ten figures: the Turtles, Splinter, April, and the four bad guys, Shredder, Bebop, Rocksteady, and the robotic Foot Soldier. There were also some vehicles (the Party Wagon, the Turtle Blimp, et cetera) and those horrible dorky role play kits. But that was it! The next year, 1989, was a huge expansion, adding another 10 regular figures, four Wacky Action wind up toys, more vehicles, plush dolls, and the resplendent Sewer Playset! But to me, the most important addition was Krang, Krang, Krang! At first I was upset that he didn't have the goofy fat-man-in-a-red-speedo-with-matching-gloves-and-booties android body, but then they started using the "bubble walker" power armor chair in the TV show and everything was fine with me. 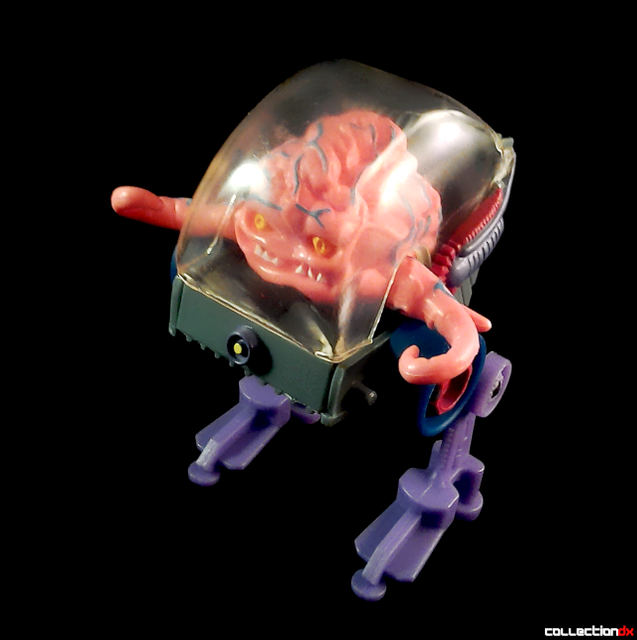 I do remember as a being a little annoyed that the Krang toy had arms on his walker, but they popped right off so no big deal. The gun and the neat hose that connects it to Krang's walker were indispensable, though. How else was he going to suck people's brains out? Unfortunately, Krang's tentacle is not great at holding the gun, so I would usually end up going back to the arms, TV accurate or not. 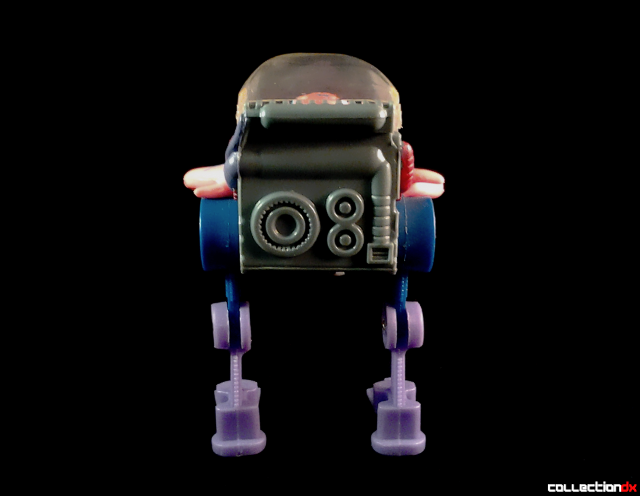 Of course, if you are looking for accuracy to the cartoon, the original Ninja Turtles toys will never, ever give it to you. But on a purely toy level, maybe that's a good thing. The toys usually have quite detailed sculpts and Krang here is no exception. I love the detail on the back of the walker. Some kind of gear thing for connecting the Technodrome? Little thrusters for going faster? A little network port for connecting to a computer? Good stuff. 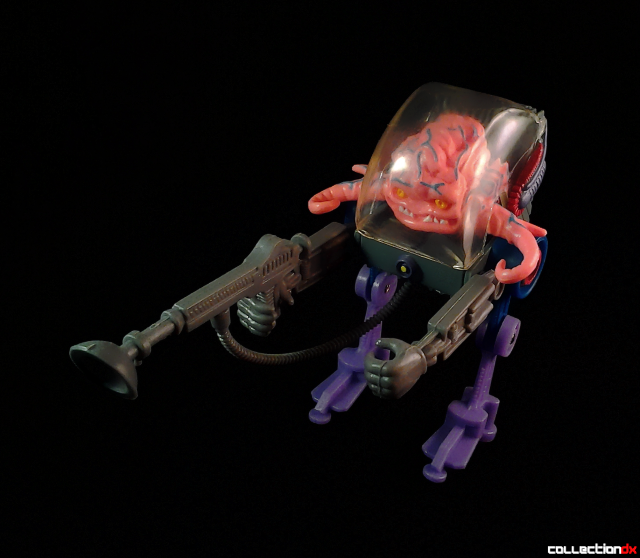 One thing that bothers a lot of people about the old '80s-'90s Ninja Turtles toys is many of them are sculpted in weird poses which makes a neutral stance impossible. Krang does not have that problem! In fact, his articulation is surprisingly good. The walker has joints at the knees and the hips, the arms move up and down, the clear domed canopy opens, and Krang's tentacles move. Sure, it's not some modern hyper articulated toy, but for 1989 it was pretty damn impressive and easily put Krang near the top of the Playmates line. 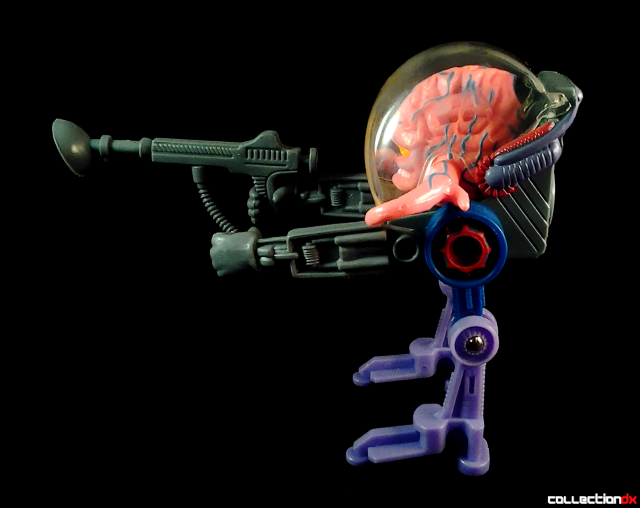 Of course, another really cool feature of Krang is that you can pull him out of the walker altogether. Krang looks neat in the chair, but he also looks great out of it. It also has a hole inside of the Krang brain part so you can put it on your pinkie like a deranged finger puppet.

The sculptors at Playmates did a really great job of bringing the design work of the folks at Mirage studios to life. The various wrinkles and veins on Krang's body are gloriously gross and Krang's pointy teeth and beady eyes are all well-designed. 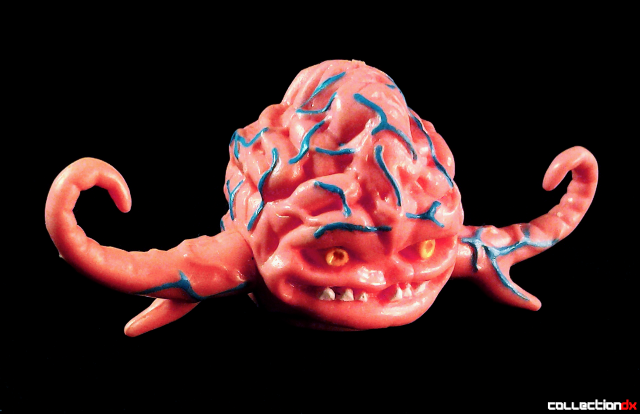 The paint is a little spartan, but used effectively. The colors on the walker's legs are nice, I like the hoses on the chair, Krang's yellow eyes are simple but good, white teeth also makes perfect sense, but I need to give special props to the yucky blue veins on Krang's body. Now, the paint work is not the most precise and does tend to wear off in places with play, and not all of the veins are painted, but the ones that are painted look super good. Krang is nasty and horrible and great. 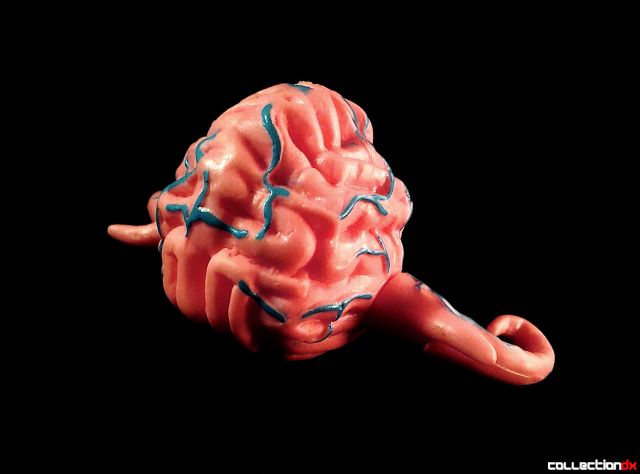 Do you need this Krang action figure? I sure did. In truth it's probably a little out of scale with the '80s Turtles, but it actually looks good with the recent Playmates Ninja Turtles Classics toys. If you are a Ninja Turtles collector, you may be tempted to skip this and go to the larger Krang's Android Body, but that's not only a lot more expensive, it's also just a totally different toy. Honestly, you should get both.

If you are not a Ninja Turtles fan, though, I still think Krang is a good buy because he's a nasty alien brain in a robot chair and that goes well with all kinds of goofy sci-fi space toys. You can even stuff Krang on a 3 1/4" G.I. Joe's head! Get conquered by the future ruler of Earth today!

Bonus 1: Enjoy the TV commercial that introduced this Krang toy.

The amount of nostalgia I'm feelin' right now. Thank you.

Bought this one up as soon as I saw him! Always loved the original, but I was young when I got him, so it's pretty trashed. The bubble broke off (I held it on with a rubber band) and the tiny pegs that hold the arms on were easily broken (though I only managed to break one). I LOVE that the new pegs are thicker! It's great that they decided to improve him rather than leave him exactly the same.

The figure really stands the test of time, and I like 'em just as much now as I did then.