Combiner Wars has been over for quite a while now, and while many were able to consistently keep up with its constant wallet destroying yet necessary character releasing onslaught of waves and waves where every single figure was a necessary component to the next combiner team, many unfortunately including myself were not so lucky, unable to complete our favorite combiner teams simply due to the sheer number of them being produced in such a short amount of time. Now the prices for individual combiner limbs on the secondary market can be a little much for some, including myself, but when I found that there were full knockoffs of these combiners on Sirtoys, I decided to at least check one out and see if they were a worthy replacement to their 2015 authentic Hasbro releases, Defensor and the Protectabots specifically. This review will focus on that more than the individual details, articulation, and transformations of the figures, as most of you reading this probably knows full well how typical Combiner Wars Deluxe Limbs work.

Starting off with my favorite member of the team, First Aid’s paintwork and detailing are identical to the original, and actually applied just as well in all areas, except for his Autobot symbol, as it has been replaced by the default Decepticon-esque insignia used on countless Transformers knock-off figures, it’s pretty strange to see it on a modern transformers mold, and as every figure in the set includes them, this might serve as a deal breaker. If this really does bother you, I’d recommend just getting reprolabels to cover them up, and as this detail is on all figures in the set, I’m not going to mention it again beyond now. Personally, I think it’s a little weird and would have preferred them to have no insignias at all instead of these more dubious ones, but really the only figure that the symbol really bothers me on is Groove, and I’ll get to him later. Like I said, aside from that, First Aid’s paint application is identical in both modes, looking just as good as his authentic counterpart. A couple of aspects to look out for, are the loose joints in my copy, as it can make posing him, especially when holding his heavy hand/foot gun a difficult task. Speaking of which, First Aid’s accessories are also identical to his original figure aside from the finger portion of his hand/foot gun’s missing slot that would normally allow for storage on the top of the vehicle mode. Another minor grievance is the loose fit his axe weapon has in First Aid’s hand, as this makes holding it straight a little difficult in some poses. Overall I’d have to say First Aid is an above average replica of his original figure that completely nails the look but suffers in its solidity, feeling like a noticeable downgrade in quality from his original figure. 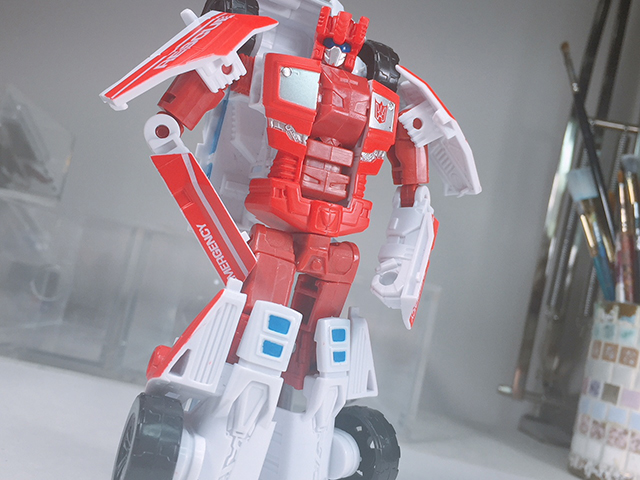 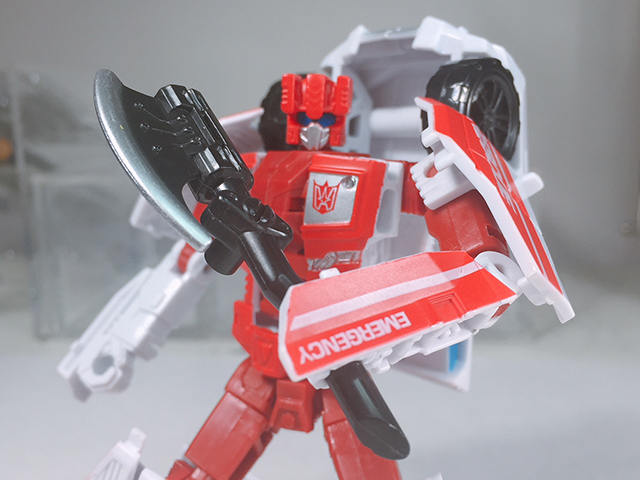 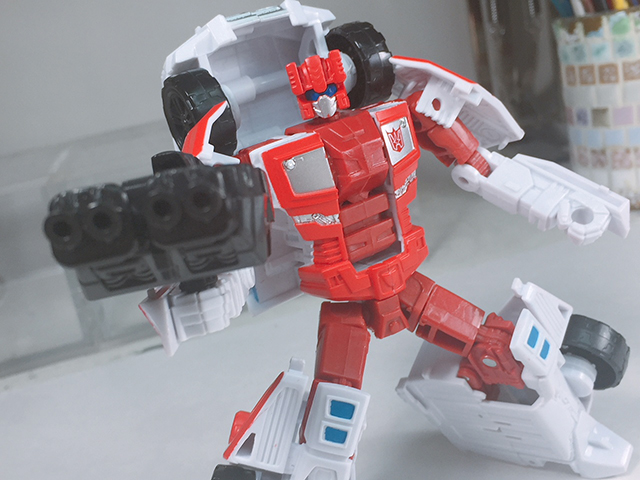 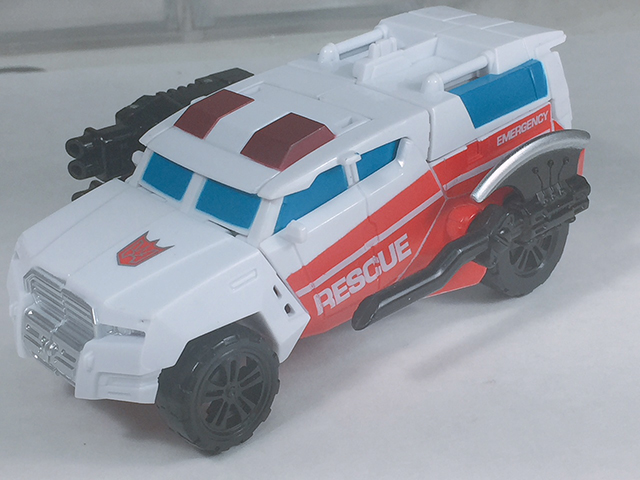 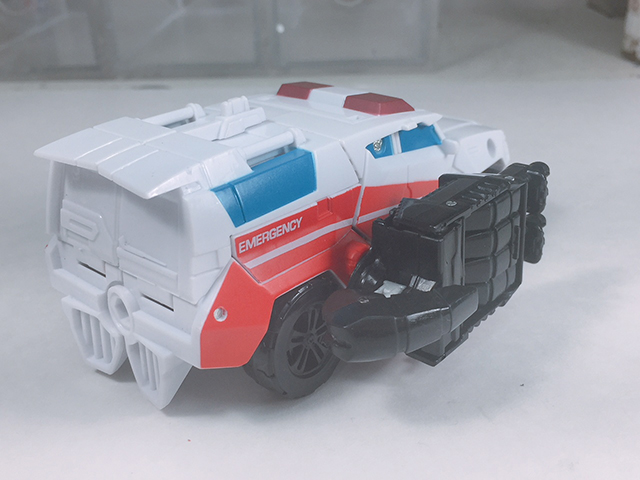 Next is Groove. Seeing how I mentioned him earlier when talking about their insignias, I will say that Groove’s fake one is pretty noticeable being front and center in his alt mode, a detail that’s a little distracting to me but doesn’t degrade the figure’s actual quality in any way. In terms of detailing, Groove’s paint apps are very similar to his original figure, but in his vehicle mode, he is missing patches of silver that would normally be on either side. It’s a minor but still disappointing omission, but I can look past it. What I really can’t look past, are his guns. While his hand/foot gun is actually not the one the official figure cane with, but instead the weapon usually attributed to the Breakdown mold, Grooves two normal guns are rendered in mismatched gray and black plastic, instead of the painted translucent red that looked so great on the original. Groove’s qualities are actually the opposite of First Aid’s, he feels just as good physically as his official figure but is lacking in detail in some both major and minor ways, making him a still decent, but more below average imitation of his Takara counterpart. 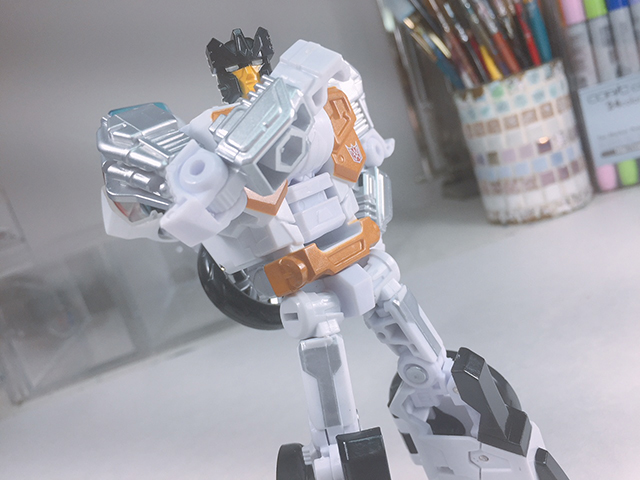 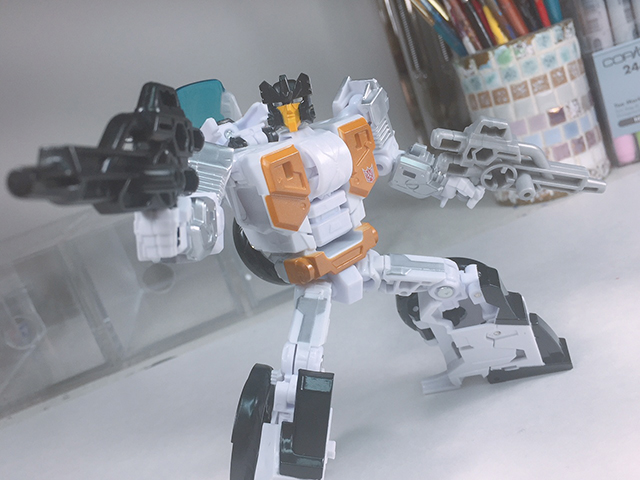 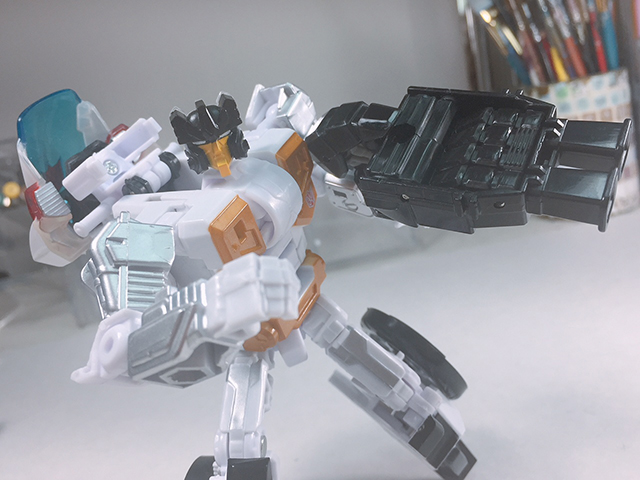 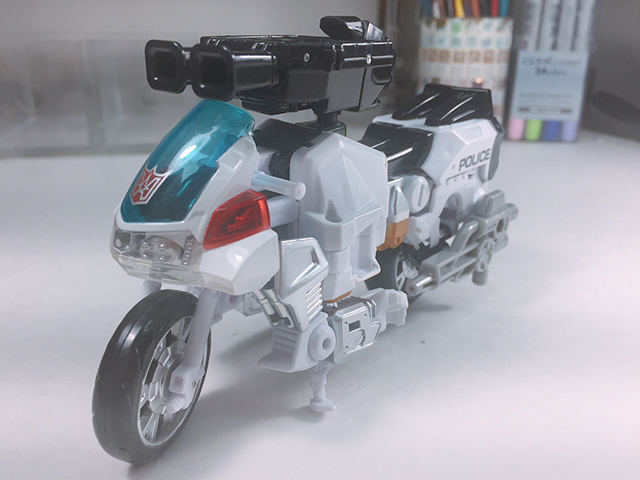 After Groove comes Blades my second favorite Protectobot, and he is a similar story to First Aid but his joints are mostly tighter.m, elevating him to a higher tier. In addition to that, his details are just as faithfully reproduced, and aside from his hand/foot gun again being different from that of the official figure, he is definitely a very good replica of his Hasbro counterpart, but not my overall favorite limb in the set. 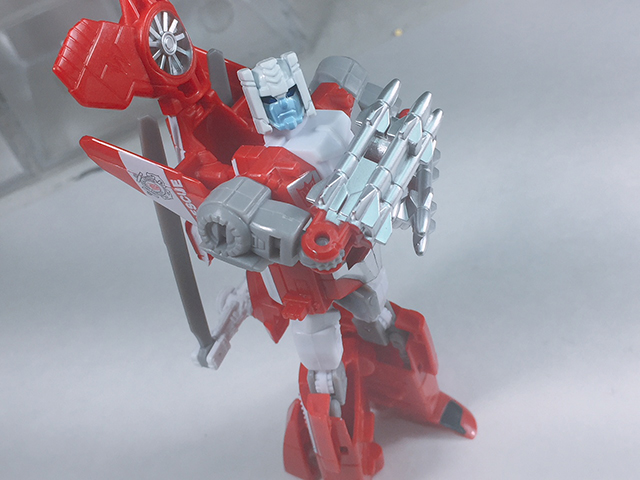 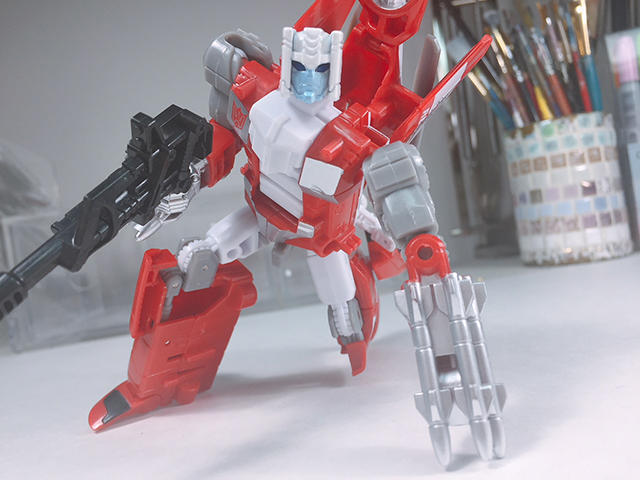 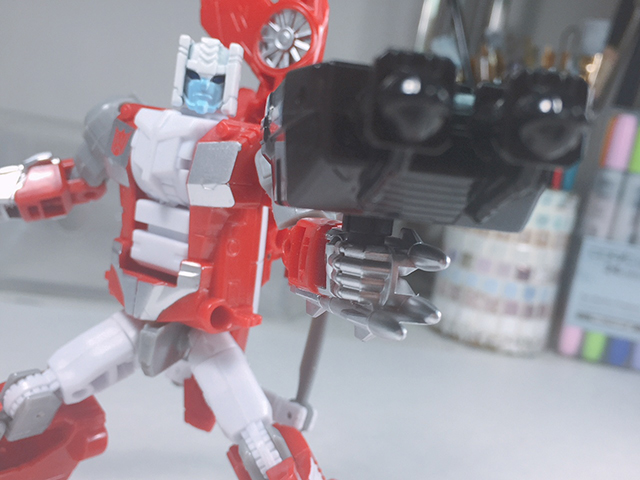 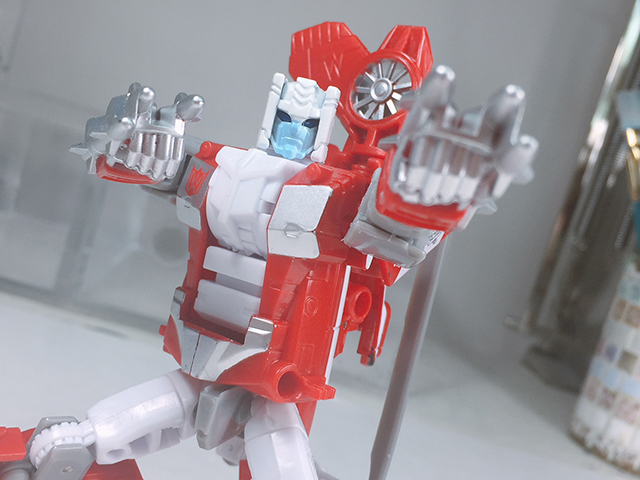 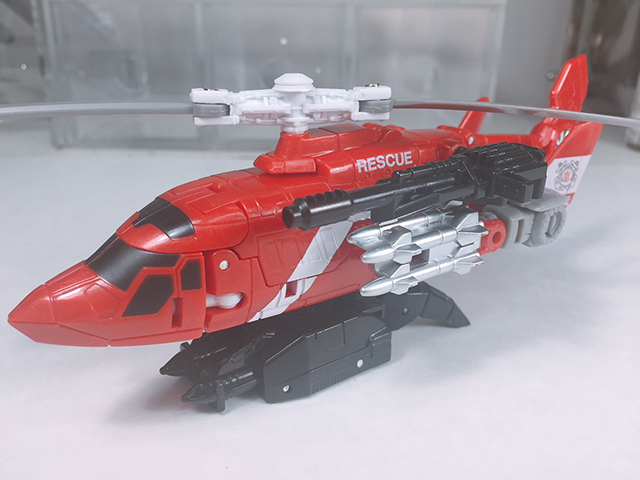 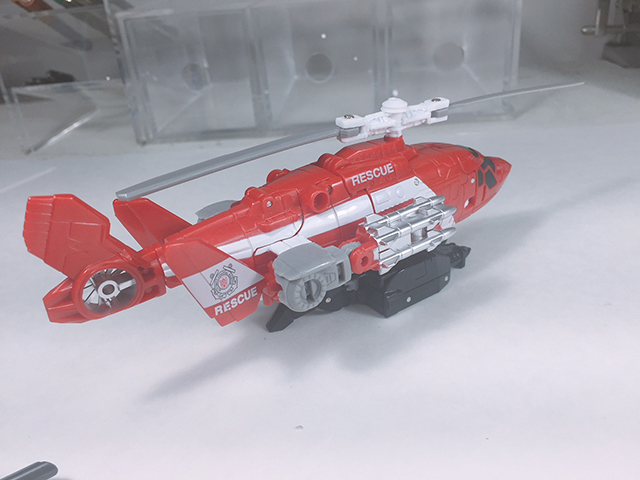 Saving the best for last, Streetwise is my favorite, and probably the best limb in the set despite not being my favorite Protectobot. Every detail is preserved and replicated with complete and total accuracy, every joint feels very solid, and transforming him is always a really fun experience! His hand/foot gun is also the same as on his official counterpart, with the only difference from the original at all being the shade of gray rendering his triple barrel shotgun is a little lighter than before. If you factor everything into account Streetwise is definitely an outstanding reproduction of his Hasbro release and the absolute best Deluxe in the team. 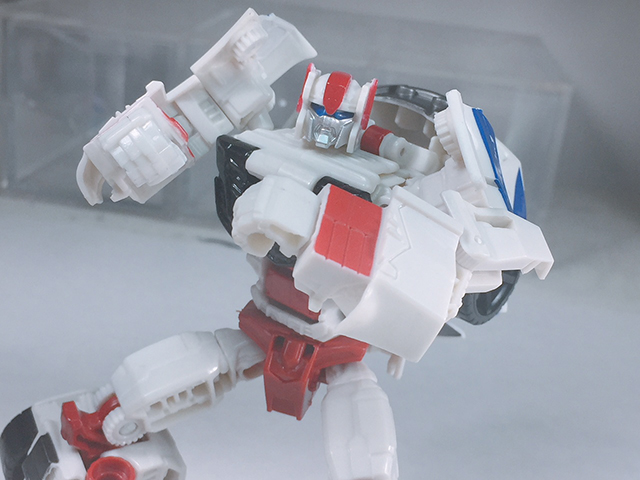 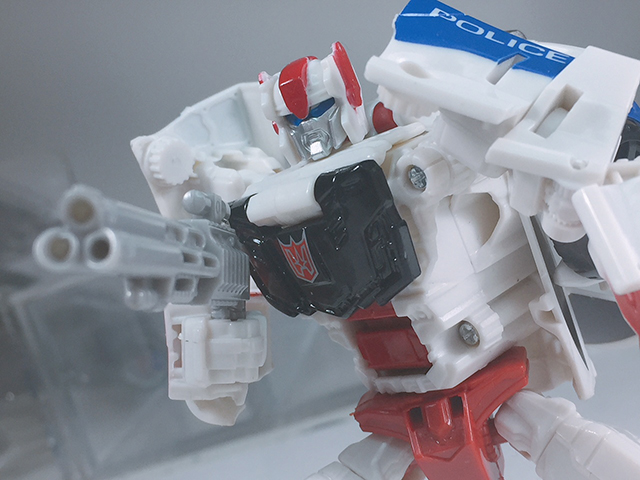 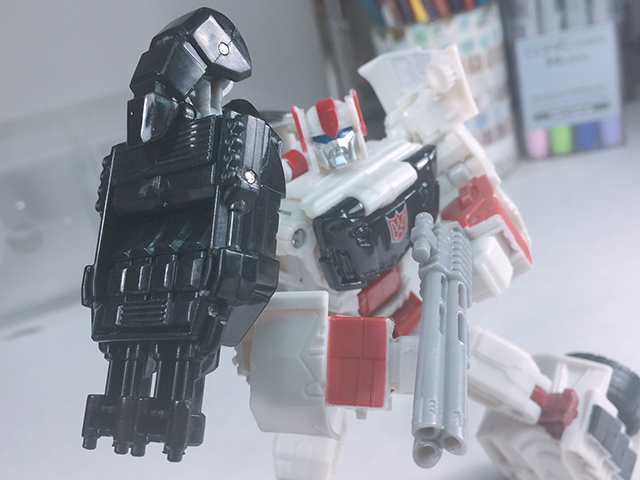 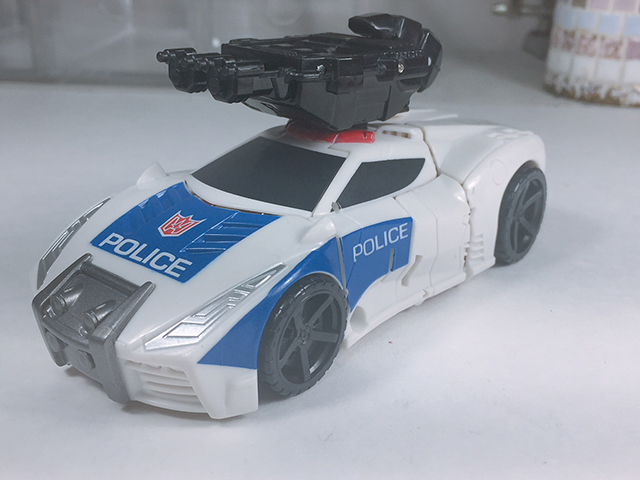 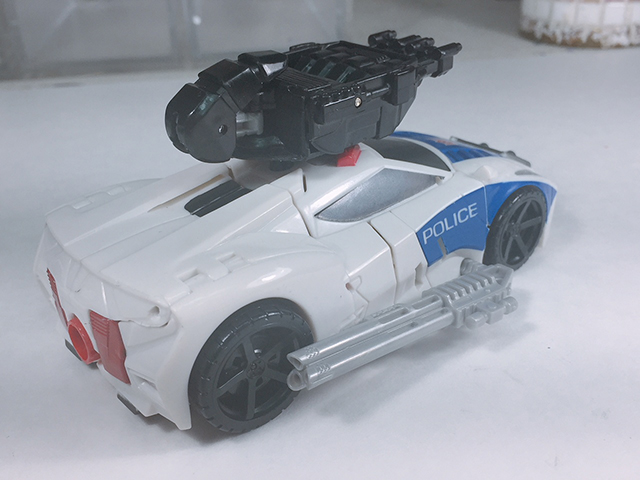 The Protectobot team leader Hot Spot is a different story entirely when compared to his teammates. Although the plastic quality feels cheaper than on both the Hasbro and Takara versions, this more dubious release is actually better than both of them combined, as every paint application from both figures, is here, making for a very detailed and amazing looking improvement on a mold I already really loved. I never thought one of these knockoffs could ever be better than both of their original figures, but Hot Spot makes that look easy, becoming by far my favorite aspect of the set. 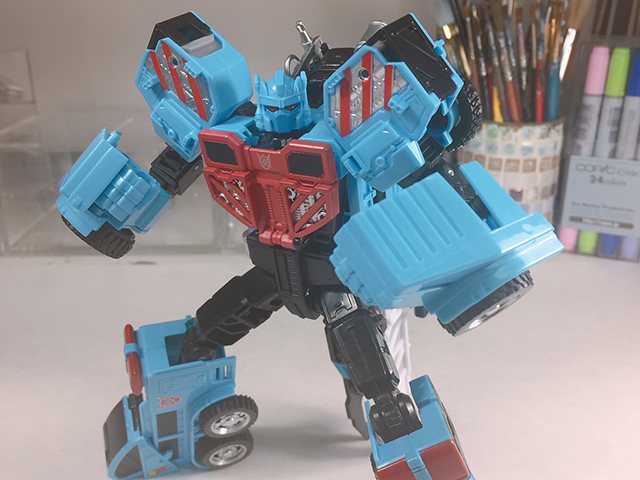 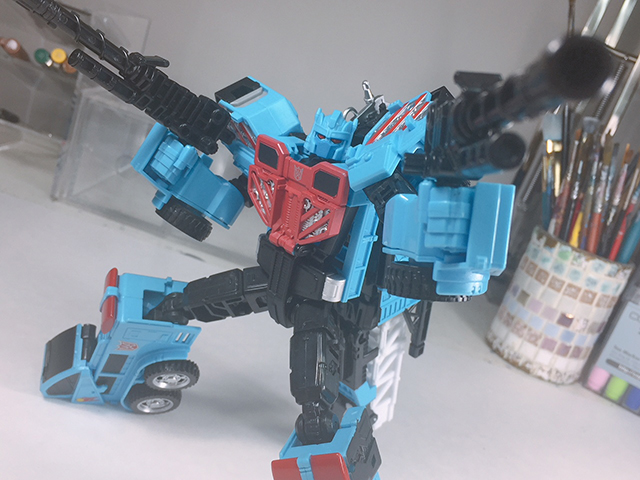 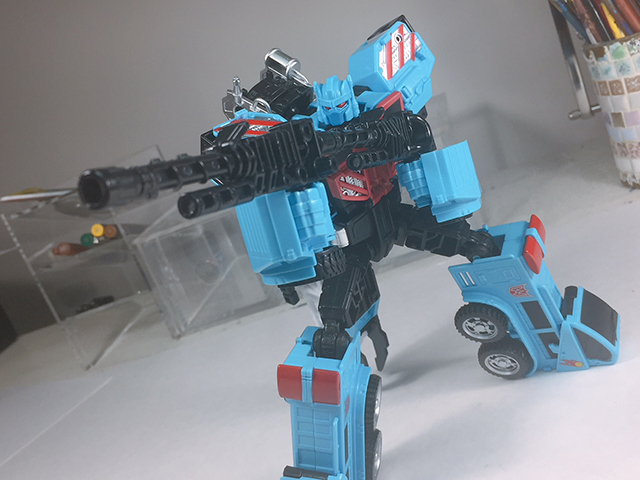 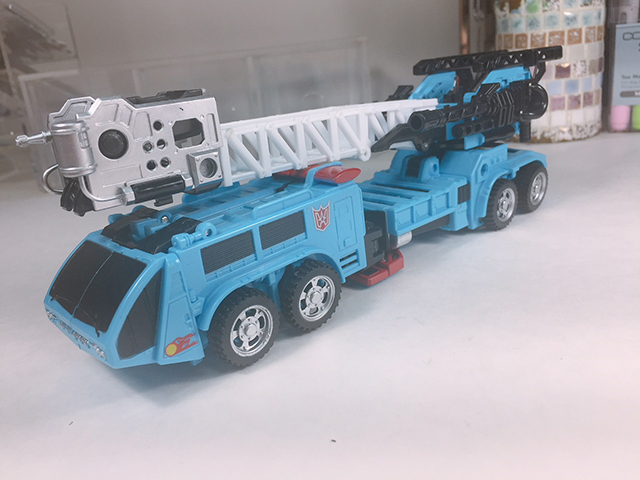 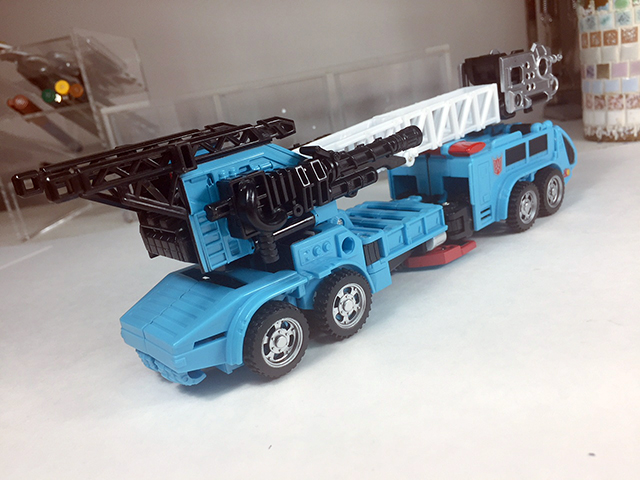 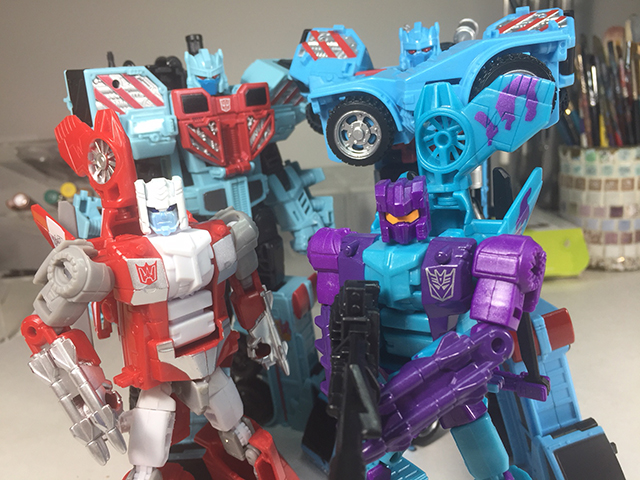 Despite some of their admittedly minor shortcomings, all five of these Knock Off Protectabots really do look great together, especially in group shots like this! 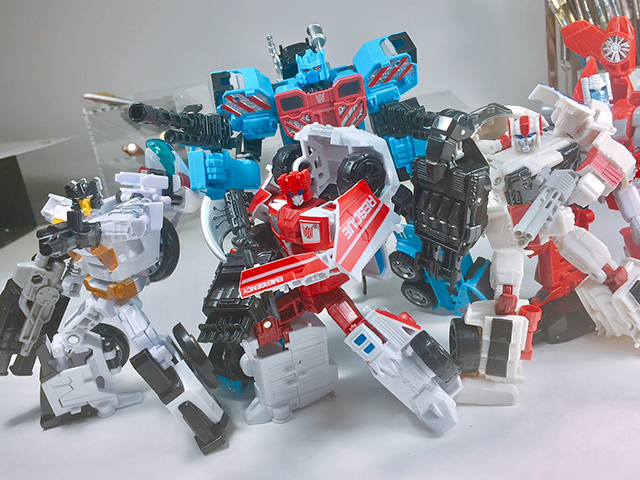 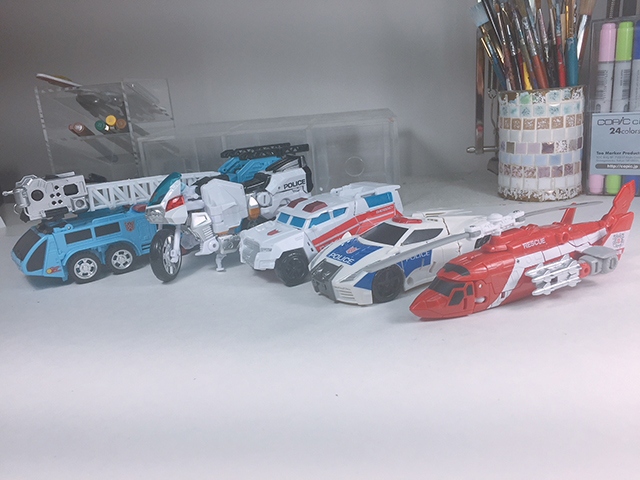 When combined, Defensor looks just as impressive and can hold a pose just as solidly as the official gestalt can, but some of the joints, especially the elbows can be just a little too loose at times, and the ratchet joints don’t feel quite as strong, but overall there combined form Defensor looks great, and feels above average for a knockoff, but still not as solid as the authentic figures when combined. 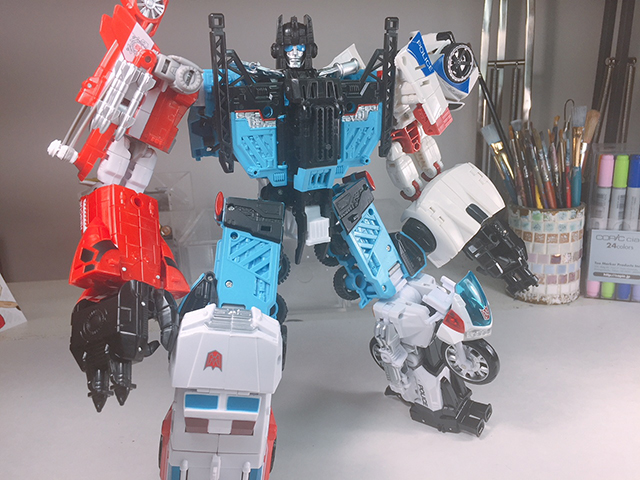 Overall, I have to say I was very pleasantly surprised by this set of Knock off Combiner Wars Protectabots. Even without factoring in how inexpensive the set is, what you get here is a relatively faithfully reproduced team of KO Protectabots that feature very accurate and cleanly applied paint applications which on Hot Spot are actually better than the original, and a build quality that is by no means perfect but definitely better than I could have ever expected. If you are okay with some minor differences to the official figures, and some loose joints here and there, then this set of Knock Off Combiner Wars Protectabots can make a fitting addition to a collection of official figures or Knockoffs alike and is more than worth its asking price. 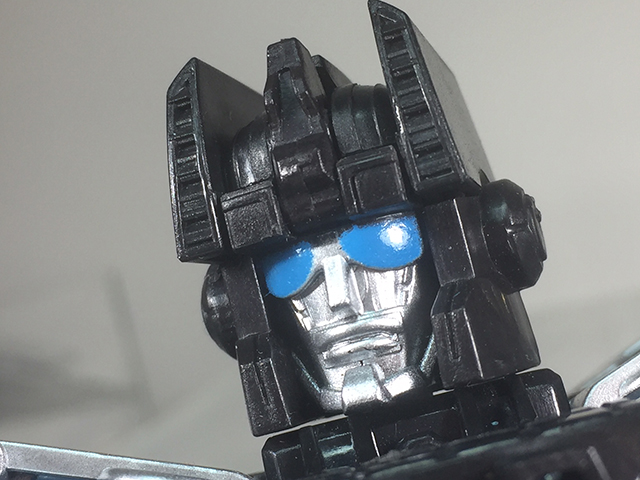 Really nice Ko's Too bad about the insignia's. it looks like it would be hard to cover up. or remove.

Although I'm no mod expert.

But I could see this being a modder's dream.

to make your own team etc.