Transformers Alternators was one of the first Transformers series I was ever aware of, as my Mom’s car back in 2004 was the same year Subaru Impreza as Alternators Smokescreen, so even though I was way too young for it at the time to fully appreciate it as a figure in the way I do now, she bought Smokescreen for my brother and me when we were only about 4 years old! I still have it to this day, but since then I’ve only accumulated 3 more official alternators figures. However, there are plenty of Knock Off Alternators out there with original color schemes, the most interesting that I’ve seen thus far, is this particular example, a white and red repaint of Transformers Alternators Skids, evocative of one of my favorite characters, Ratchet! Now, Alternators isn’t known for its figures holding up particularly well in terms of engineering in regards to their age, so although the Skids mold itself might not be the most intuitively designed or fun to transform, but it was and still is a pretty decent figure that I’m glad I at least have a rendition of. Provided for review by Sirtoys, this KO White Alternators Skids thankfully only suffers in quality from the mold it’s based on rather than from it’s inherently dubiously produced construction, making it in all regards a great bootleg, but does that doesn’t necessarily make a great figure.

In vehicle mode, this KO Skids is difficult to line up correctly, but still very well realized Scion Xb, rendered mainly in white with some pretty Ratchet-esque details, such as the red line across both sides, and an emergency cross adorning the roof. Aesthetically, this vehicle mode actually looks great once you go through the lengthy process of lining everything up properly, really the paint applications and detailing is very good, and plentiful. Of course, being an Alternator the doors, trunk, and good can open up revealing four seats, a detailed interior, and even an engine! It’s still impressive to me that Alternators could have so much detail on their vehicle modes, but if you consider the shortcomings seen in this figure’s future, it seems as though the transformation and robot mode was designed secondary to the vehicle mode features and details. That doesn’t take away from what really is a perfectly good vehicle mode, it just shows how slapdash the figure’s transformation seems to me. 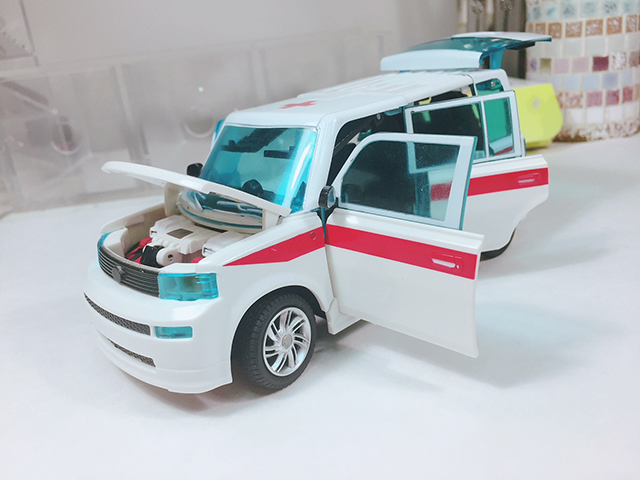 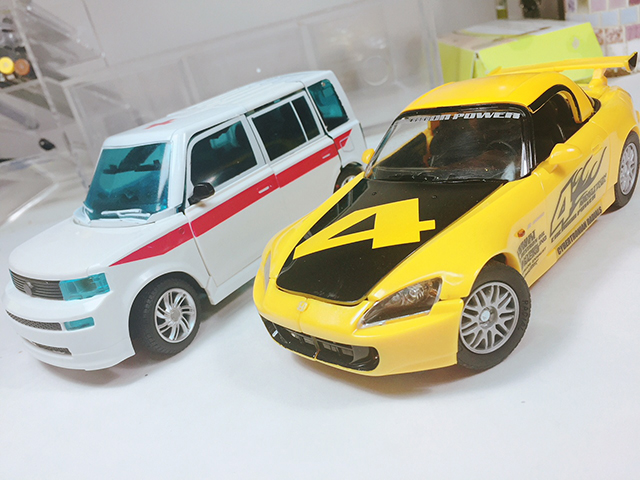 Skid’s transformation to robot mode is complicated and ambitious, but it’s also kind of a mess in my opinion. Few aspects of the process from both robot to vehicle and vice versa, everything just seems loose, nebulous, vague, and insecure. It’s definitely interesting, but not in a very good way. I will say the leg transformation, and their construction is very solid, they definitely feel like the best part of the figure, they look decent, are solid and transform in a concise and purely functional way. Really this figure being a knockoff doesn’t make this transformation any worse, granted it’s not awful, it’s just overly ambitious and dated in the most blatant way an Alternators figure can be. For instance, online I’ve found multiple ways for his backpack panels to configure, if the one I’m using isn’t correct then I don’t know for sure what is!

In robot mode, KO White Skids actually looks pretty good in terms of detail and paintwork, but due to the mold it’s based on, it really falls apart when it comes to proportions, his body is huge and it’s sloped so far down! Now, I understand the front section of the car couldn’t compress much at all due to the steering mechanism inside of it, but really I think there had to be another way, it just doesn’t look very heroic or cool, especially with his diminutive little arms. As I said before however, his legs actually do look and feel pretty solid which is great considering the rest of the figure falls apart pretty easily. A couple other positives I do have are his head sculpt, which I actually really like, and the figure’s color scheme which actually looks pretty cool, I especially like the gold knees and red crosses on each shoulder as they give the figure some visual flair it wouldn’t have otherwise. 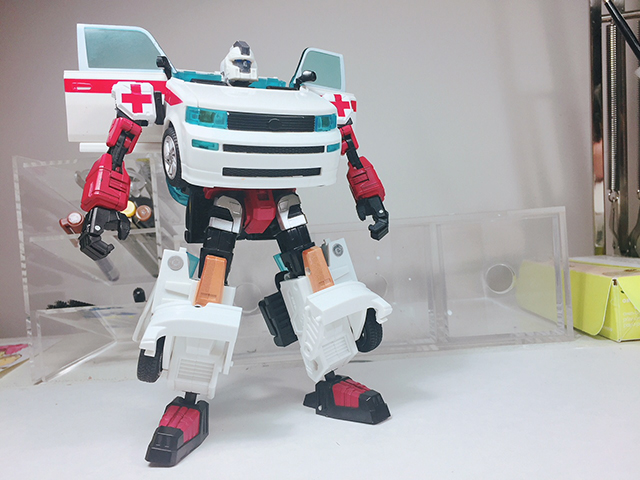 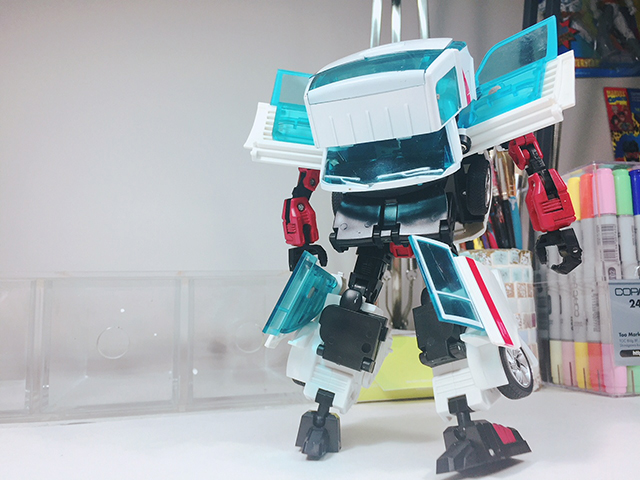 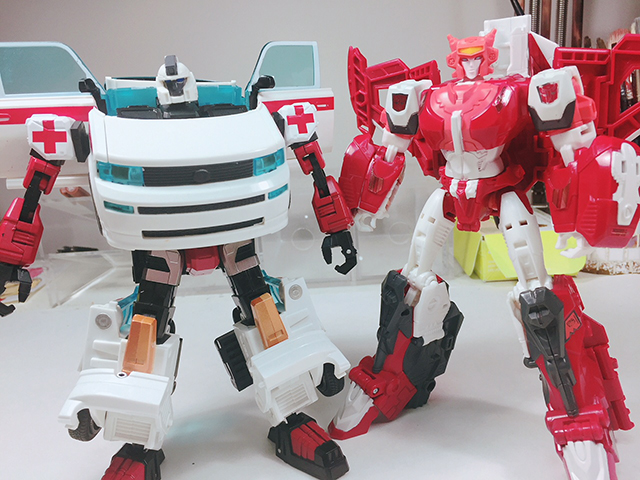 As far as accessories are concerned, Skids includes a tiny little gun that was his vehicle mode engine, a standard feature in the line, but even this seems pretty behind other figure’s weapons from the line such as Smokescreen’s or even Sunstreaker’s. In addition to that, this figure actually throws quite a curve ball, as being a knockoff he also includes some modified Gundam weapons, specifically two gm commander type machine guns, and two beam based weapons that I’m pretty sure are from Stardust Memory. The former my copy holds very well, and are my default weapons when displaying him, but the latter two have different handles, meaning that he can barely hold them at all. However I really wasn’t expected any extra weapons at all so I’m not disappointed, I actually really like this White Skids dual wielding those machine guns he actually looks pretty cool! 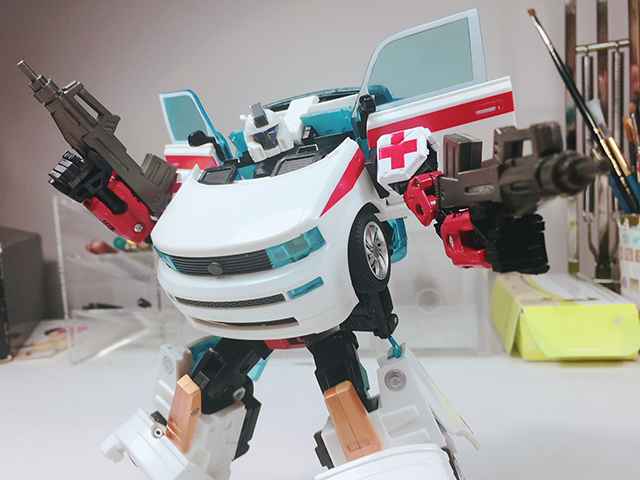 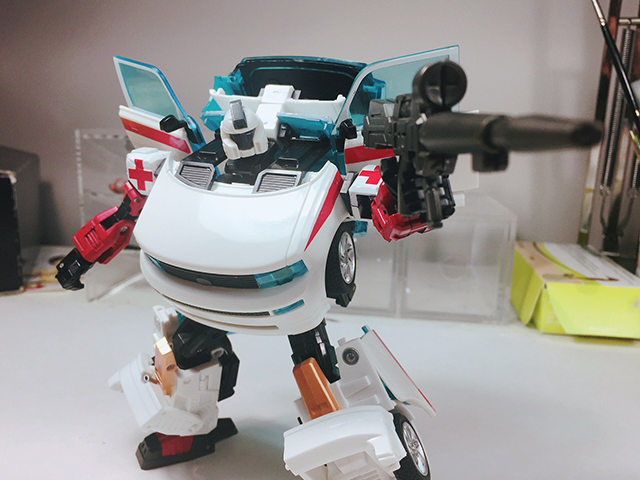 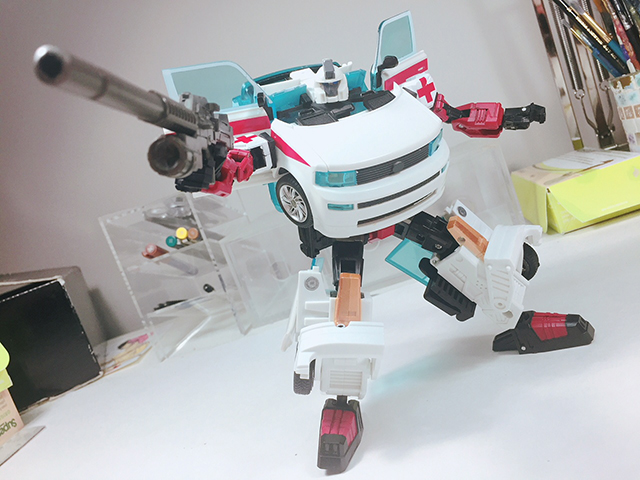 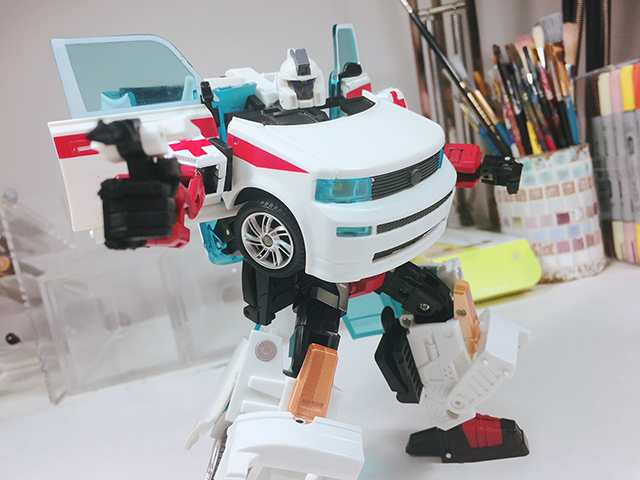 Overall, I have to say the this KO White Alternators Skids is a great knockoff that realizes the figure in basically its original quality, while giving it a repaint that makes it a character many people are very interested in, but its main flaw is who it’s a knockoff of, as in my opinion the Alternators Skids mold just isn’t a particularly good one. That really is just my opinion, I know many people really do like this mold, and if you do more power to you, but I just can’t say it’s for me, despite it’s objectively and surprisingly good build quality and level of detail.