The subscription box market seems to have exploded in recent years, with boxes available for pretty much everything you can think of. The Omakase Box from Viewster seems to be a new bimonthly subscription service at a more premium price focusing on specific anime series’ for each box instead of a random merchandise each month. At 35 dollars after shipping (29+6), the boxes are quite a bit more than subscriptions like Loot Crate and Nerd Block but Omakase box also claims to have a value of over $60. Viewster itself seems to be a Swiss company that runs an online streaming service similar to Hulu featuring original content and some licensed Anime.

I’ll be upfront and state that I am not particularly fond of the subscription box concept. The majority of the boxes all seem to contain a bunch of random crap stores couldn’t give away if they wanted to, a Funko Pop and T-shirt I would never wear. The only reason I subscribed to this particular box was due exclusively to my love for Kill la Kill. 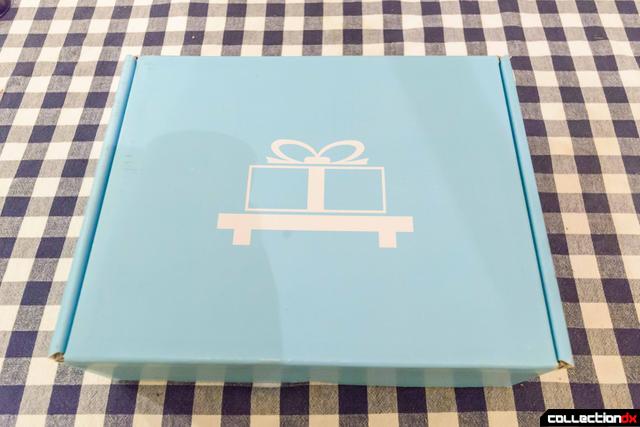 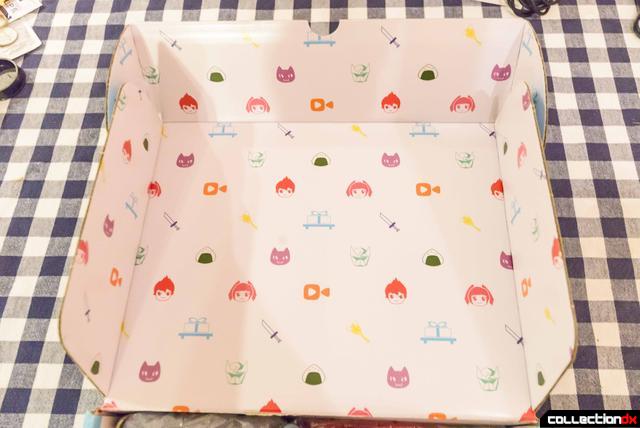 The box took about a week to arrive, and I believe they are actually shipped from Europe, accounting for the majority of the time. I do like the simple design and color of the box, and the inside features a cute pattern reminiscent of the Murakami LV pattern. 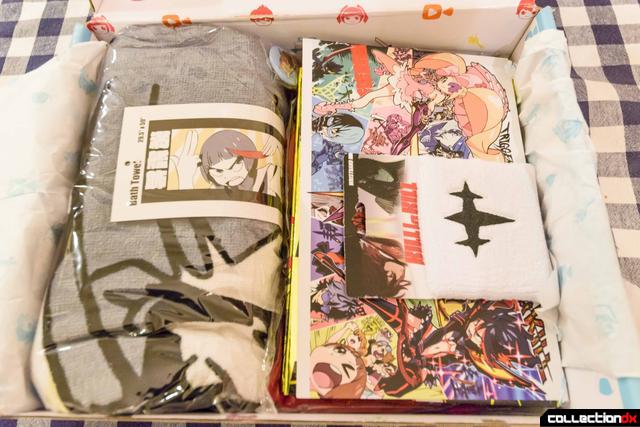 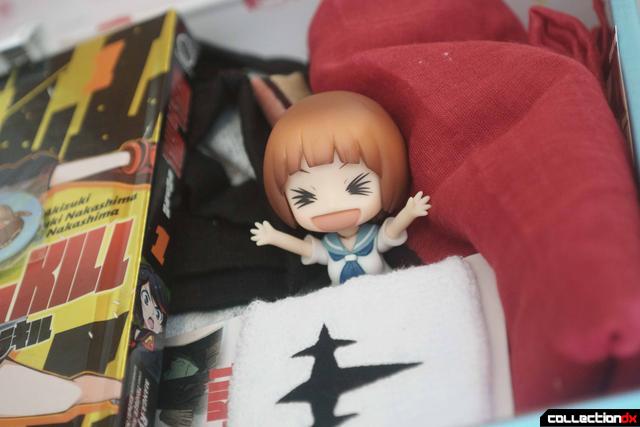 Inside are 5 Kill la Kill related items and a card with KLK artwork and a description of all the items on the back. Included are a Senketsu scarf, Mako bath towel, Guts pin, Mittsuboshi (3 star) wrist sweatband and a hard cover edition of the Kill la Kill manga distributed by Udon Entertainment. 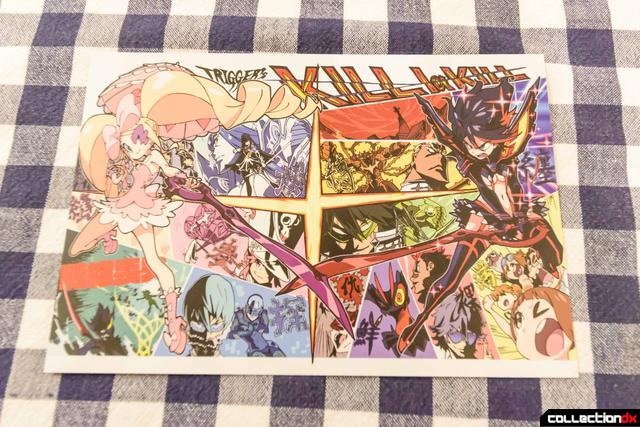 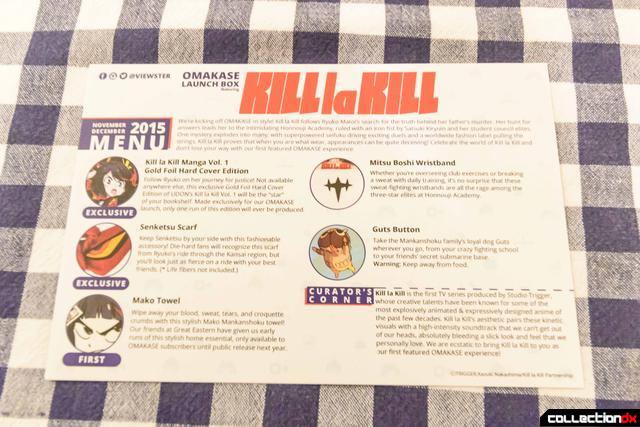 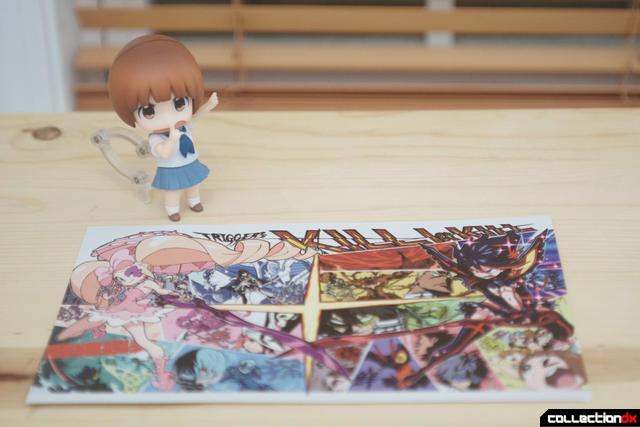 The art card is actually really nice and shows off most of the major characters from the series. 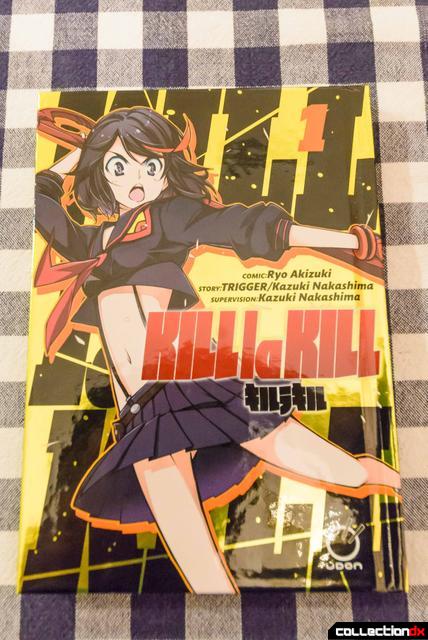 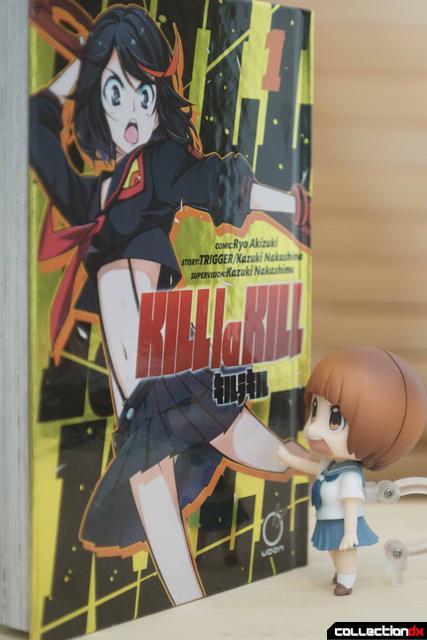 The hard cover KLK manga is a limited first volume featuring gorgeous gold foil. While nicely made, this is actually one of the things I was least interested in. I’m generally not a fan of manga adaptations, and KLK features very animated characters that probably don’t translate into comic form too well. I’m also a huge fan of Sushio’s art style and the manga does not follow his awesome style. 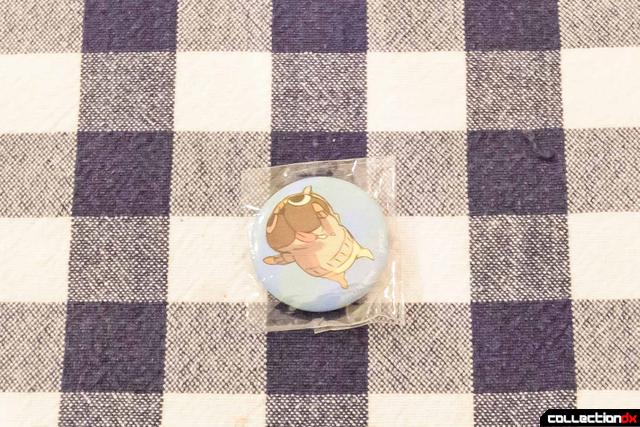 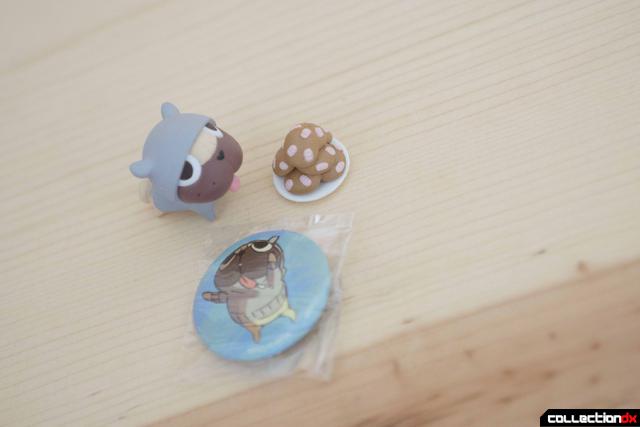 The Guts pin is just your standard tiny little button pin. It’s neat, but I’m old enough and/or my clothing/baggage is expensive enough that I don’t want to poke holes in them. It’s neat but I will probably never open it. 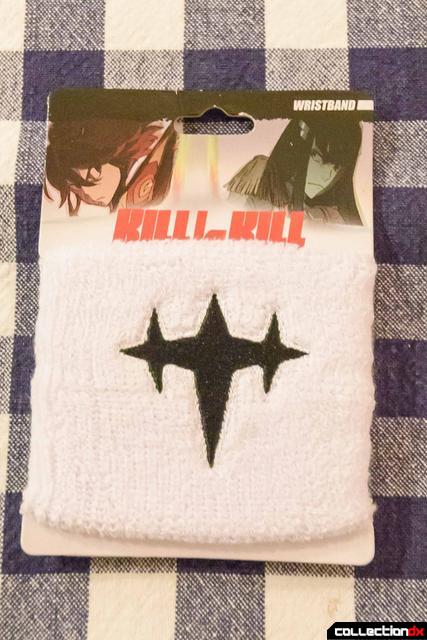 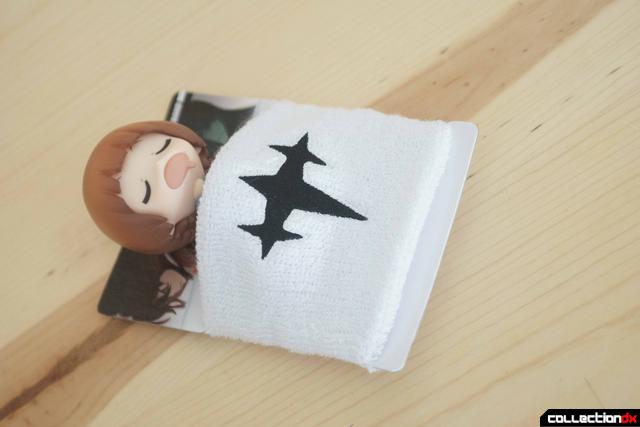 The sweatband is just a standard white wrist band with the 3 star uniform logo printed on it. It’s subtle enough that you could use it and no one would know what it is unless they watched the show. 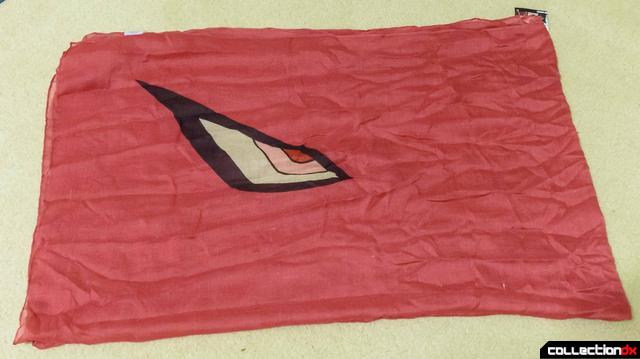 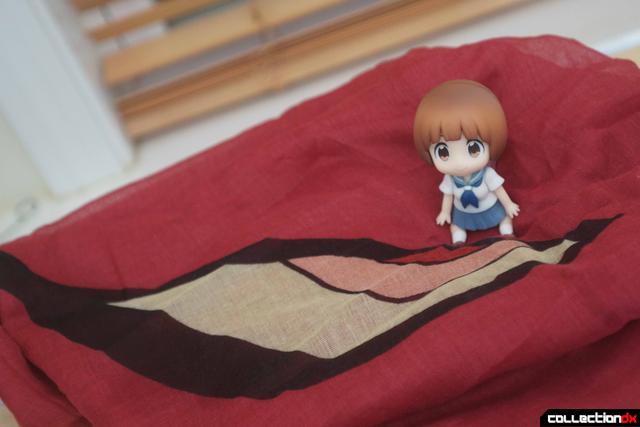 One of the two items I bought the box exclusively for is the Senketsu scarf. The scarf itself is gigantic, maybe 6ft long and features Senketsu’s eye in one corner. I’m not much of a scarf wearer but I really love this and will probably use it to wrap my camera in my bag. 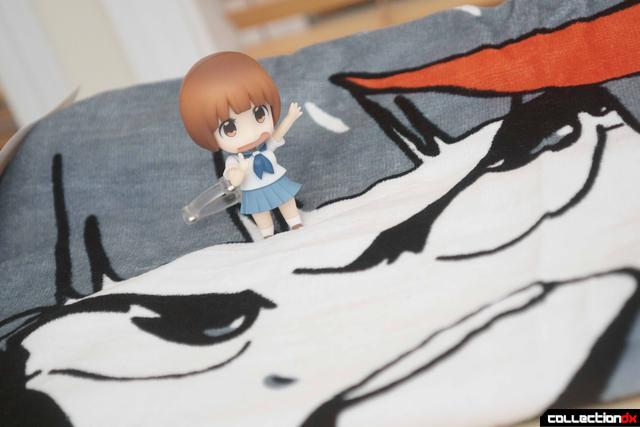 The other item I was most excited for in the box is the large Mako bath towel. The towel features a large monochrome image of Mako doing her Ryuko impression with the single red strand of hair in color.

At 29 dollars per box and 35 after shipping, the Omakase box is really expensive. While the items are a lot nicer than what you would find in your generic nerdy subscription service (thank god there is no KLK Pop Vinyl) I’m still not convinced the 5 items are really worth almost 35 dollars. I do really love KLK so I went in knowing I was paying so much for just two items but more casual fans may feel the subscription is not quite worth the price.

I do feel the need to mention that while I do not have any major issues with the Omakase box itself, Viewster as a company has disappointed me greatly. They are a new company, and the KLK box is technically their first box (they had Hatsune Miku test box sent to online reviewers) so they might deserve some slack, but the way the company has handled many things makes them feel very unprofessional and amateurish. The site itself has some pretty terrible coding and I was not able to even check out and pay for it in Google Chrome. I ended up having to do it in Internet Explorer, but my subscription would not even show up in my account until deleting my cookies in Chrome. In fact, after rebooting my computer, my subscription disappeared from my account again forcing me to delete the cookies again to show. Trying to cancel my subscription has also been an ordeal, and I actually haven’t even been able to cancel yet. Repeated attempts to hit the cancellation button have resulted in no results and I am still waiting for my support ticket to be reviewed.

The biggest issue I have with Viewster doesn’t actually affect me, but seems like a total slap in the face while simultaneously being kicked in the balls. The deadline to order the KLK box was Monday, November 23rd. After this date, the KLK box was supposed to no longer be available but two days later on the 25th, Viewster offered a Black Friday promotion that gave new customers the KLK box and the following box (Naruto) for 40 dollars. Previous customers were not given an option to be prorated or offered this deal, and really seems like Viewster is giving existing customers the finger. Had the company just offered the Naruto box and the one afterwards for the 40 dollar promotional price would have been fine, but giving a deadline to order an item that would supposedly no longer be available and then offering it for almost 50% off two days later seems like a terrible way to retain any loyal customers. Viewster did try to alleviate the situation by giving existing customers a 6 month subscription to Shonen Jump online, but they also gave it to all customers of the Black Friday deal so it really didn’t feel like it accomplished much. I only bought the box for KLK and had no plans of ever purchasing future boxes anyways, but the principle of the matter means I cannot recommend the service to anyone else. While the product they offer isn’t bad, the incredibly poor decisions by the company have left a rather negative impact. I know it’s a bit of a rant, but it deserves being mentioned.