“Kamen Rider: Dragon Knight” is based on the original TV series, “Kamen Rider Ryuki” (仮面ライダー龍騎, literally "Masked Rider Dragon-knight"), which aired in 2002 as part of the long running Kamen Rider franchise in Japan. It is produced by newcomer Adness Entertainment, Ltd. in close association with Ishimori Production, Inc. and Toei Company, Ldt. [both of which make the original tokusatsu franchise]. Even though Bandai is making the toys for “…Dragon Knight”, they are all completely new remolds from those that they originally released during “…Ryuki”, and so they will all differ in size, features, and materials from their Japanese counterparts.

Drew Lansing first appeared in Episode 4- “A Rider's Challenge”, but is formally introduced in Epsiode 5- "The Power of Two". He is a con-artist on Earth who was recruited by Xaviax to convert other Riders for him. Because he was under threat for his crimes on Earth, Xaviax held that against him to insure his loyalty. If Drew served faithfully, he would become a general in Xaviax’s army after he had conquered Earth. One of his first assignments was to trick newcomer Kit Taylor into thinking that the last surviving Ventaran, Kamen Rider Wing Knight, was actually the enemy of Earth, and that Xaviax was in fact trying to help them all. As the green & silver-colored Kamen Rider Torque, Drew draws on the power of his Contract Monster- a slow but heavily armed minotaur called Magnugiga. Some of his Advent Card attacks include Launch Vent and Shoot Vent, which use pieces of Magnugiga to form larger-sized projectile weapons for Kamen Rider Torque. To activate his Advent Deck cards, he slides them into his hand-held Magnuvisor blaster gun. Drew Lansing is played by actor Christopher Foley. 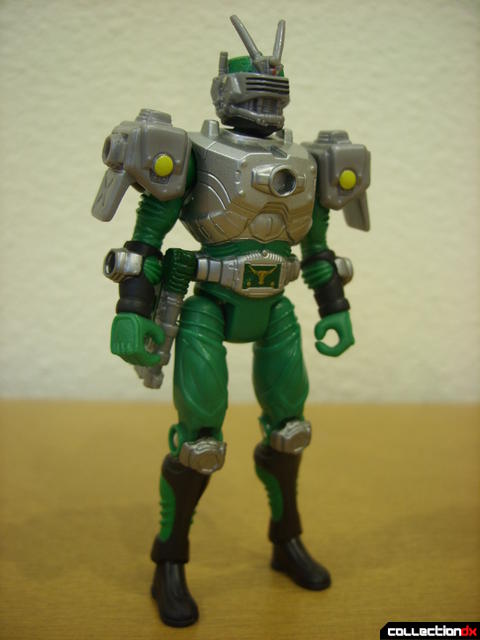 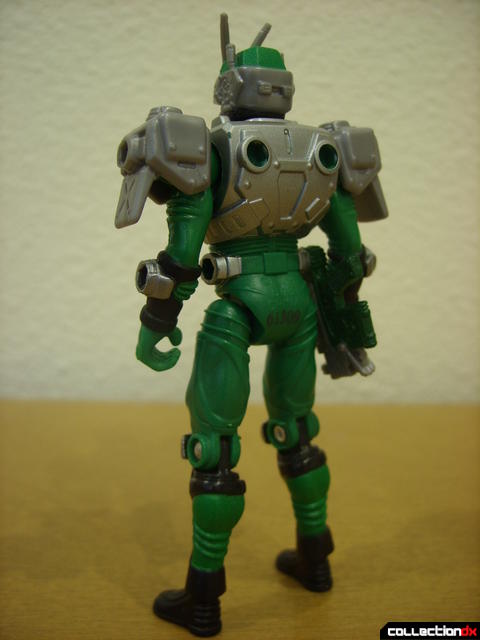 This figure is 4” tall, and is composed of green, silver, & black ABS plastic with minor amounts of PVC plastic. The key to all of the Kamen Riders’ powers, the Advent Deck, is located faithfully on the front of his silver belt, with Torque’s uniquely-identifying golden minotaur head on it. As with all Ventaran-built Kamen Riders, Torque has several circular mounting points across his armor at his shoulders, elbows, back, hips, and knees. What is nice, though, is that the paint apps do not end half-way around the figure- he has silver and black appearing on the back of his torso, lower legs & arms, and remains as faithful as possible to the appearance of Torque on-screen. While his green suit is form-fitting, there are lines of wrinkles & light armored straps, which add to the texture of the surface details as much as his silver armor does. Like all Kamen Riders, his eyes are hidden behind a narrow grille visor. Torque’s helmet specifically has more mechanical features like a chin guard, gears & bolts, and four small & narrow antennae, giving him a more utilitarian- almost militaristic- look than most of the other Kamen Riders. Surprisingly, the figure’s proportions are reasonably accurate, with perhaps only the front of his chest and his shoulder guards being a bit off, but those are very minor complaints.

Kamen Rider Torque’s personalized Advent Card reader is his tiny PVC Magnuvisor blaster gun. Though it obviously cannot open up because of its small size, it is sufficiently detailed. He can attach it only to his right hip, but can hold it in both hands easily.

For a 4” figure, Kamen Rider Torque is sufficiently poseable. Free-turning single-axis joints are in his shoulders, wrists, and knees, and there are dual-axis joints in the hips only. Despite being on a ball-and-socket joint, his head can only look side-to-side, with no up-and-down motion. The shoulder armor pads are designed to detach if too much pressure is applied to them and will easily snap back in place. I was surprised that there were no waist and elbow joints (the elbows are slightly bent forward), or dual-axis shoulders, but this is fair enough for a figure this size. 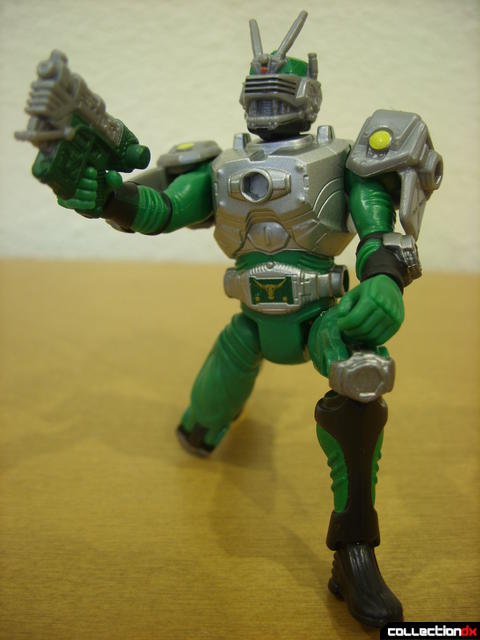 All “Kamen Rider: Dragon Knight” toys carry a unique Advent Card related to the character they are packaged with. Then, when you purchase the electronic Kamen Rider Dragon Knight Dragvisor role-playing set (#33971, sold separately), you can take the Advent Cards and insert them into it to create one of 15 unique sound effects! For this set, you get Kamen Rider Torque’s Shoot Vent Advent Card, which deals out 3000 points of damage to any Kamen Rider or Mirror Monster in its path. To use the Shoot Vent card, Torque removes it from his Advent Belt and places it into his Magnuvisor gun. This commands his Contract Beast, Magnugiga, to separate his lower legs to become giant shoulder cannons for Torque which fire huge energy blasts. 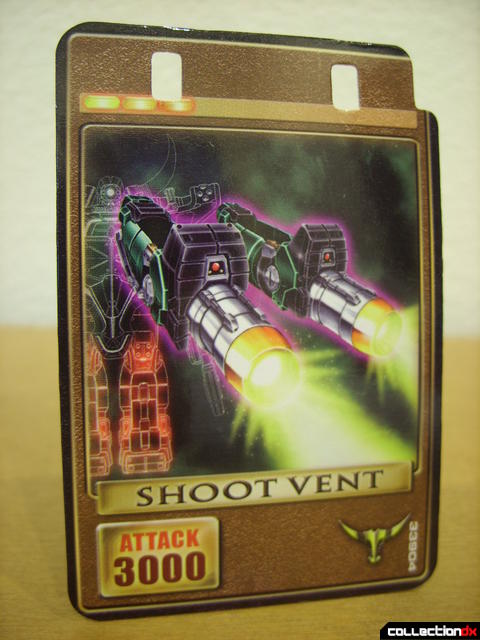 (Regretfully though understandably, they did not make a full-sized version of Torque’s Magnuvisor gun, only Dragon Knight’s Dragvisor. So, when I get the Dragvisor, I will demonstrate the Shoot Vent card then.)

The biggest hindrances to posing are in the arms for their lack of outward shoulder movement & poseable elbow, and a swiveling hip joint to turn the legs/feet for more dynamic posing. And yet, they gave him twisting wrists… But, for its size, this is still a good action figure, and can be easily placed along with other collectible 4” characters shown on the packaging- Kamen Rider Dragon Knight, Kamen Rider Wing Knight, Kamen Rider Incisor, and Kamen Rider Camo. For this figure specifically, the head always seems to be looking slightly up… which is annoying because it’s on a ball-and-socket joint! I suppose that Bandai chose the 4”-format because it allowed them to put greater surface detail into them than a 6” figure could. (Oh, BTW, there are already 6”-versions of only Dragon Knight and Wing Knight with spring-action transformations.) A larger figure would be more to my taste as a collector, but the details on this one makes its rather [proportionately] high price understandable. That alone, in my opinion, makes this figure superior in some ways to Bandai’s more-frequently-seen and older Power Rangers franchise, which is often cluttered with low-grade figures that aren’t seen on-screen or have unappealing features. However, since “Kamen Rider: Dragon Knight” is appealing to a slightly older audience than the 4-6yrs range that Power Rangers regularly aims for, the craftsmanship and attention to detail becomes more important in the long-run than action features. (Notice that even the Magnuvisor and Advent Belt are painted rather than being left the blank silver of the plastic, yay!) Whereas the toy representing the original Japanese character, Kamen Rider Zolda (Russian for “soldier” or “mercenary”), may have been better articulated, for a redesign this one isn’t too bad. Therefore, I am giving the 4” Kamen Rider Torque action figure a good recommendation. 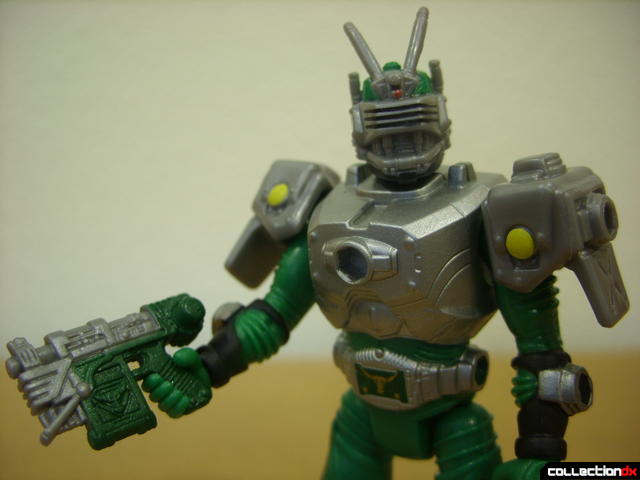 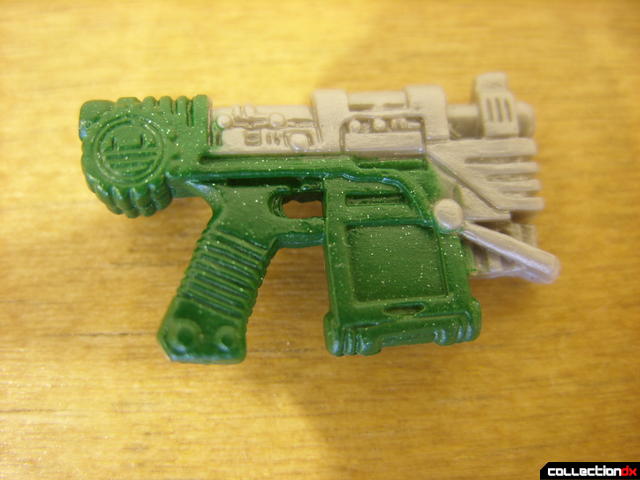 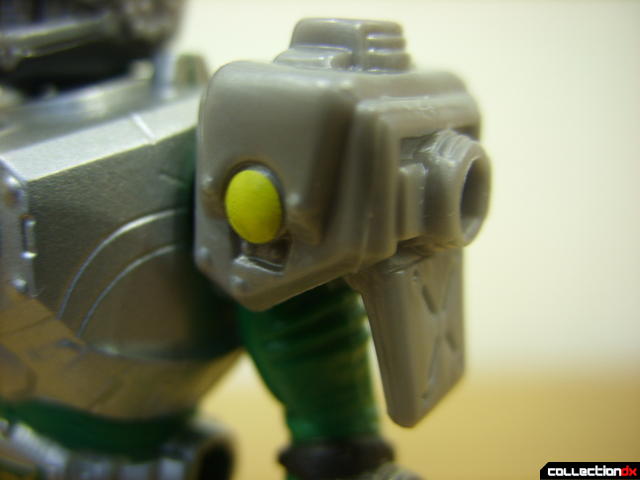 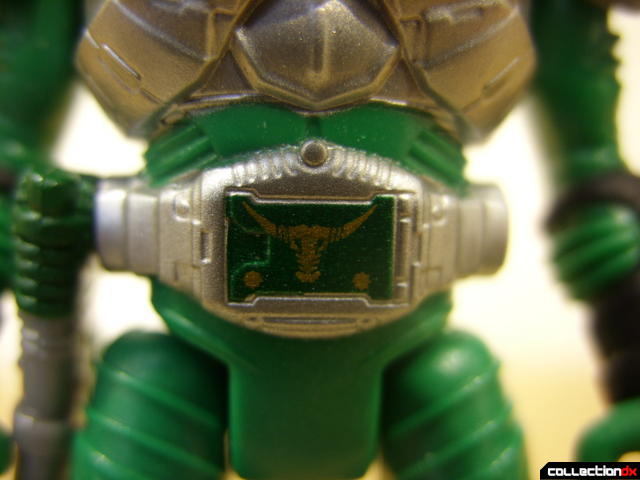 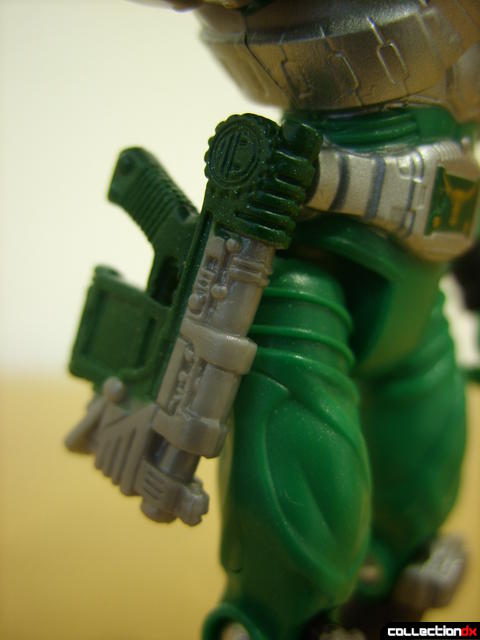 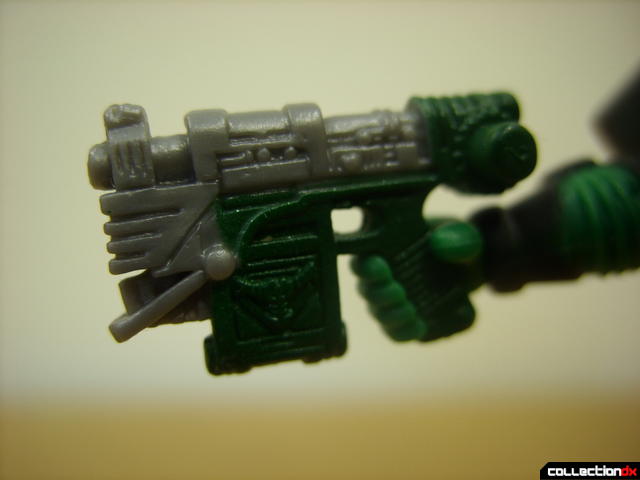 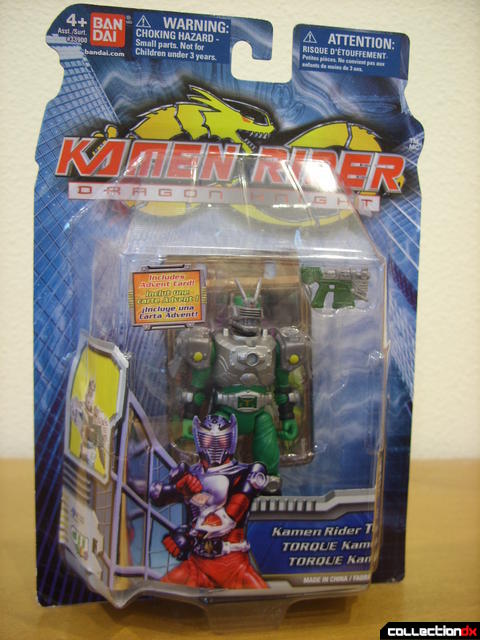 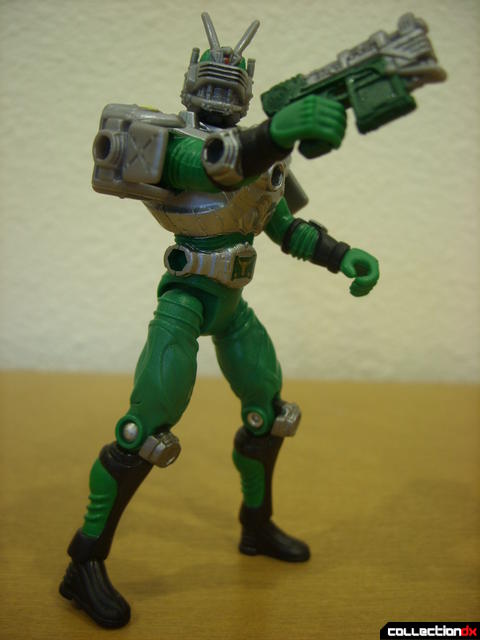 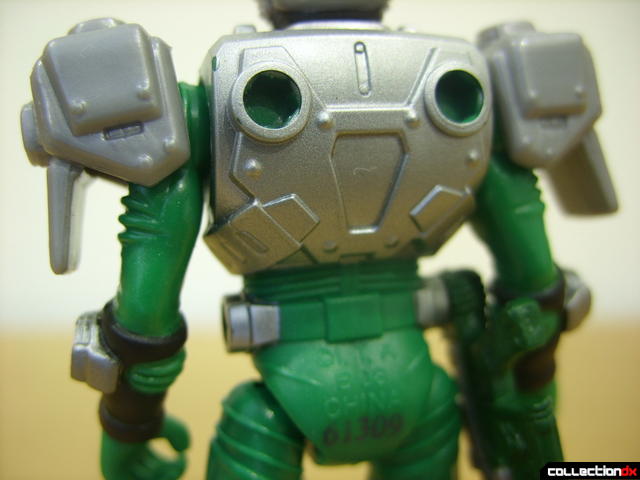 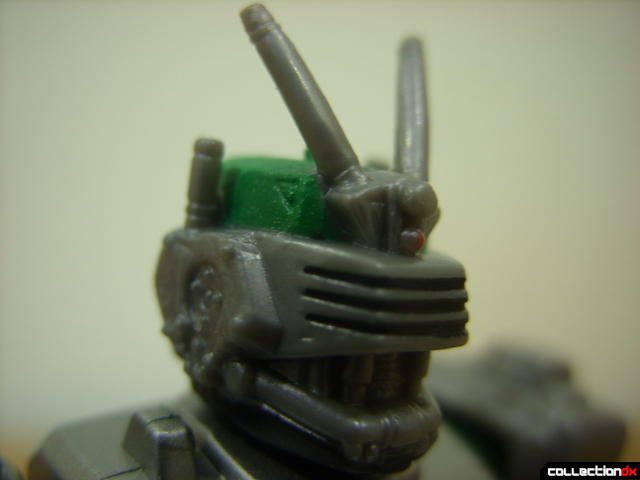 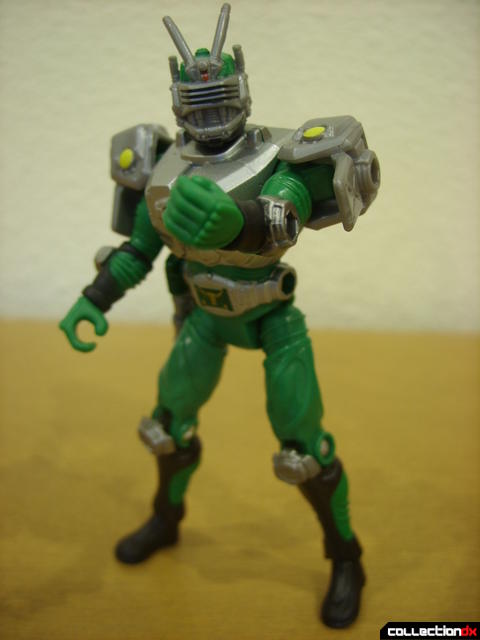 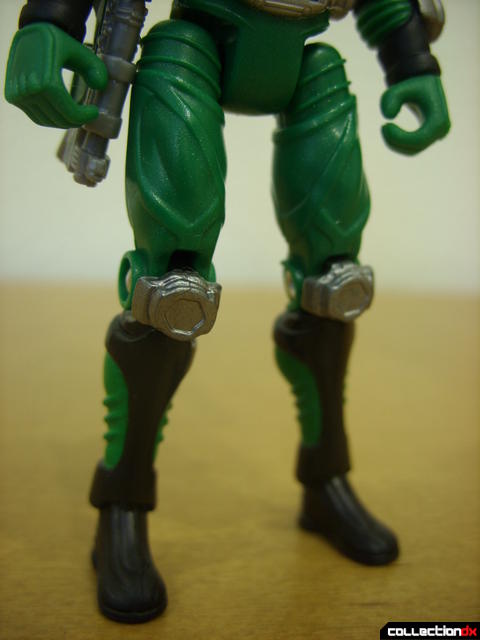 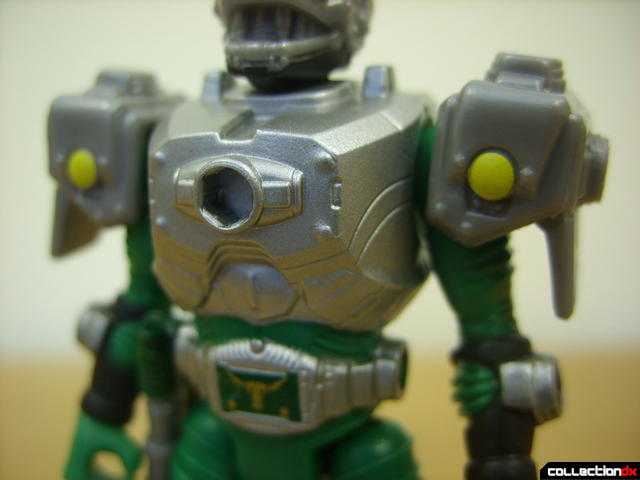 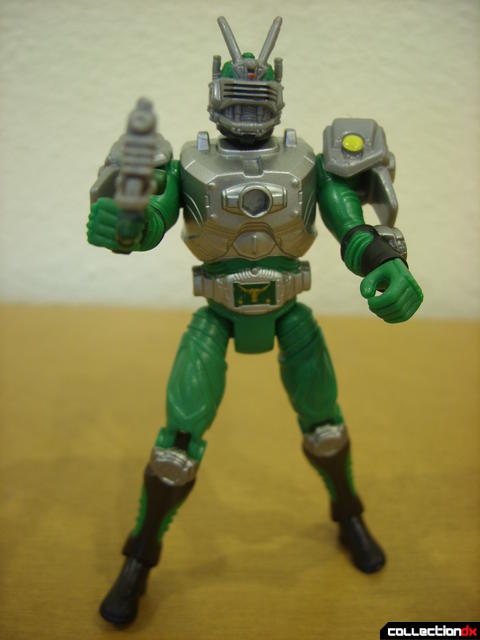 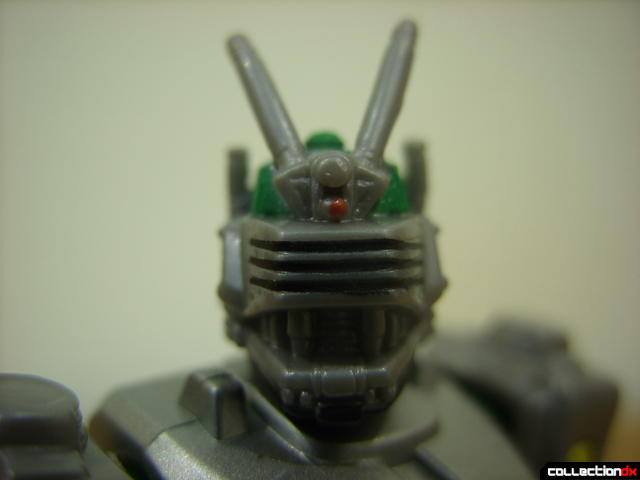 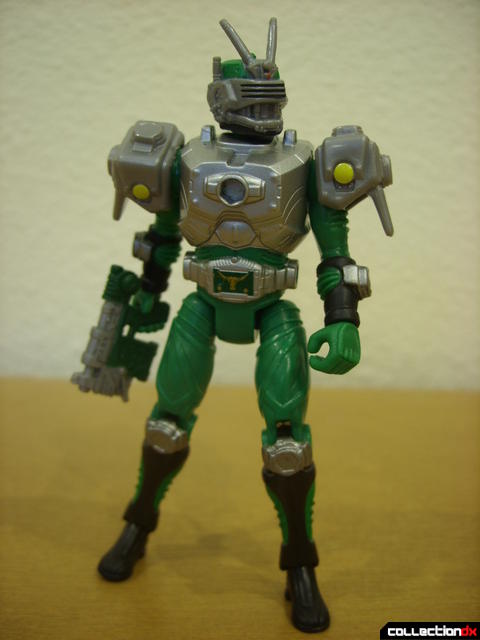 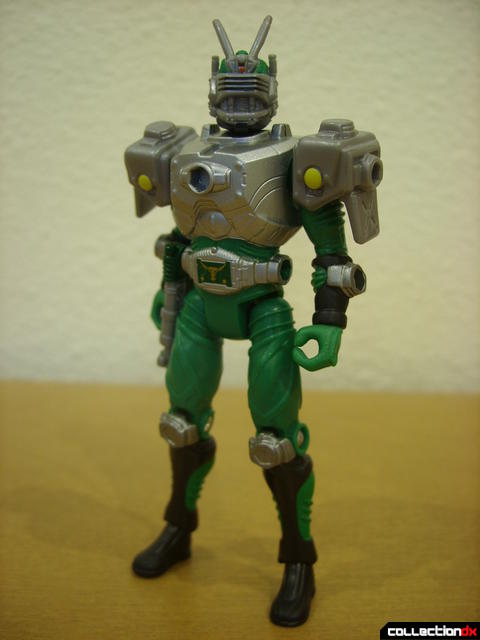 13 comments posted
You've got to be kidding!

I'm sorry, but I own the original Japanese figure and this "retooled" piece of plastic is lacking, not only in articulation, but in detail as well! The detail in the Chest piece, the gun and the helmet have all been overly simplified. The paint job is seriously bad on the American version when compared to the Japanese version which has subtle tones of grey throughout punching up the detail on the shoulders, gun and chest pieces. I'm not trying to be rude, but do you even own the Japanese version? There really is no comparison between the two.

Well, here's the thing - what did the Japanese figure retail for? $20? $30 these toys are designed for a very different market, with the sub $10 price point. Considering the restraints they had to work with, I'd say they did a good job.

Exactly. That was exactly the point I was trying to get across here- it's small and cheap, but it's not complete Fail because of that. It may be greatly lacking compared to the original Japanese version, but for its price point here in the US, it isn't bad for what you get.

I saw a review of Kamen Rider Zolda and Magnugiga in Ooebi's Hobby Factory (Japanese-only), and there is no question that the 6" Japanese version would pwn this figure.
But, I will be covering the US-version of Magnugiga in the next review w/ video I post in a few days, and questions will be answered then.
------------------------------
CollectionDX Staff

I haven't seen the JP product, which no doubt IS superior, but I have to admit, aside from the lack of elbows, that looks like a pretty slick figure that I'd be tempted to pick up if I saw it on the shelf at Target. Working within the mindset of a US released toy, I'd say it is a pretty good looking product.

with all those connection points all over the figure (kinda reminds me of Centurions) seems a shame they didn't include a transforming robot Minotaur to take apart and plug into those holes! Perhaps they'll do this for a future release?

Very soon, I will be posting the review for the Magnugiga and Drew accessory set, which interacts directly with this figure. I will discuss the features between Torque and Magnugiga then (also in a vid at the same time).
------------------------------
CollectionDX Staff

When I first saw these in Toys R Us I was quite disappointed. Considering what Hasbro does at a similar size and price point with their Marvel and G.I. Joe lines Bandai should be kind of ashamed. That said I'm still considering getting Wing Knight if only because I really like the character.

The Wing Knight figure (which I do not plan to get just 'cuz) is much more blue-colored than he is on-screen, FYI.

Yeah- I mean, if you look at any of the Bayformers sets from 2007/09, they are far more complex and top out at $50 MSRP compared to the static-display 20" Entry Plugs I covered which are $90! It just goes to show you the difference in quality of products between companies.
But, again, these KRDK toys- like most PR toys nowadays- are gearing towards being cheaper in the world financial crisis, and so will be of lower quality. But, saying that, how will the 4" figures from "GI Joe- The Rise of Cobra" compare to the 4" we've been getting for 20 years... both made by the same company?
------------------------------
CollectionDX Staff

Actually, with this painting and articulation, i think it's a waste of money. Luckily, I can get my JP ver Zolda and Magnugiga, brand new with great details, at just $13, which I think is cheaper and better than the US ver(Don't forget you have to buy them seperately in US). I don't know why bandai has to use a new mold for it. I feel sad with that.

For collectors, absolutely- it is a waste. And I do so dearly wish we'd've gotten the original figures from Japan. Perhaps with enough complaints, that could happen with the next adaptation series, or they could release "special-edition" versions of the originals later on.

The quality and price point are what I would expect, and if they package Riders with motorcycles I'm a little more excited. I'll buy one or two of these just to check them out and pass off to my nephew, so it could be hit for Bandai after all. It's nice to hear that the series is finding an audience, it's pretty decent.

Bandai did a fantastic job with these 4" Figures. Though, I was very disappointed when I first saw pics of them after seeing how Awesome the Ryuki toys are. But I still give these 4" Figures 5 stars out of 5.

Kamen Rider is geared for Adults, and not just kids, SWEET!!!