It's no secret that I like stag beetle based things. It's also no secret that I absolutely love the show Kamen Rider Blade. So it's only natural that one of my favorite Riders ever is Kamen Rider Garren. So when they first showed off the SH Figuarts of Kamen Rider Blade my immediate reaction was, “Okay, where's Garren?”. Thankfully, Bandai was very quick about getting Garren out as soon as possible. And on top of that, they packed him with his bike too! 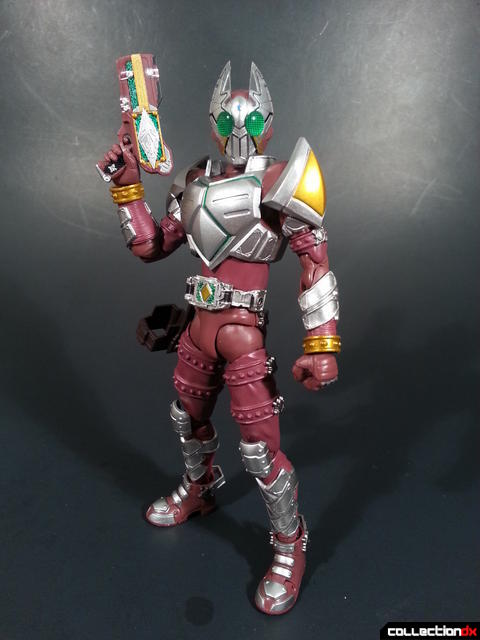 Now the first thing I do with a Figuart when I get it in hand is move all the joints around just to get a feel for how everything works. You can imagine my surprise when this happened: 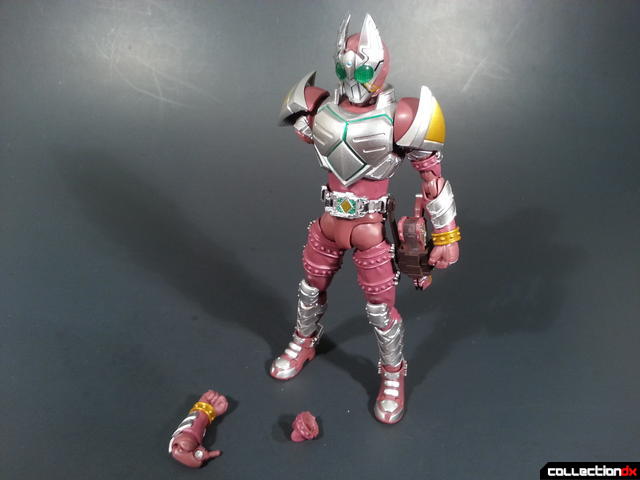 I was pretty horrified and nearly screamed out loud. Luckily, it pops right back in. Unfortunately though, it happens on both shoulders. It's not that the joints pop out easily, it's just that with the right pressure applied perpendicular to the joint, it snaps out of position. I think it's an issue with the actual socked in the arm not being tight enough, but I'm not entirely sure on this one. It's an imprecision off by mere millimeters, which is also what makes it so hard to tell what went wrong here. There are a few other odd problems with my Garren as well. Hands don't want to stay on the right ball joint, and one of my ankles are a little squeaky. Nothing detrimental to the toy, but just enough to annoy me. 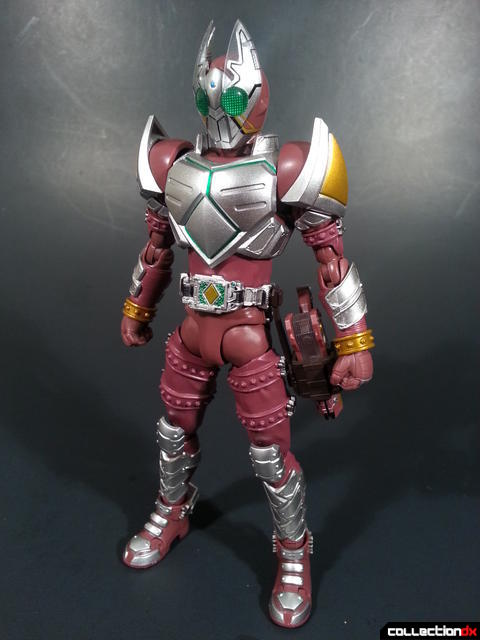 Thankfully despite that, I absolutely do love this toy. It's one of my favorite Rider designs on the brand new Renewal body that is so awesome. The sculpt and paint work is super crisp, and looks lovely in hand. 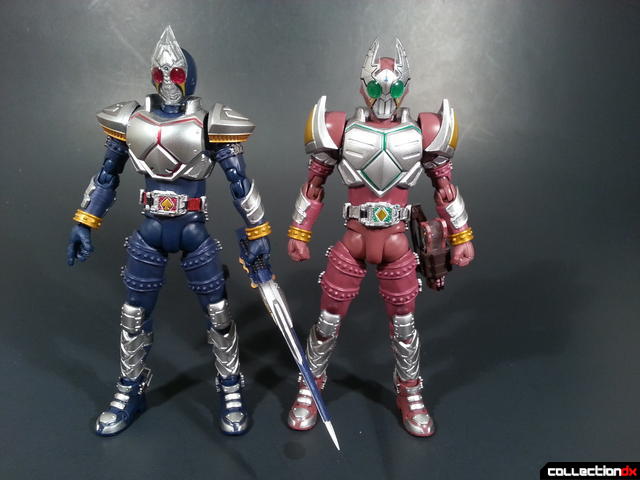 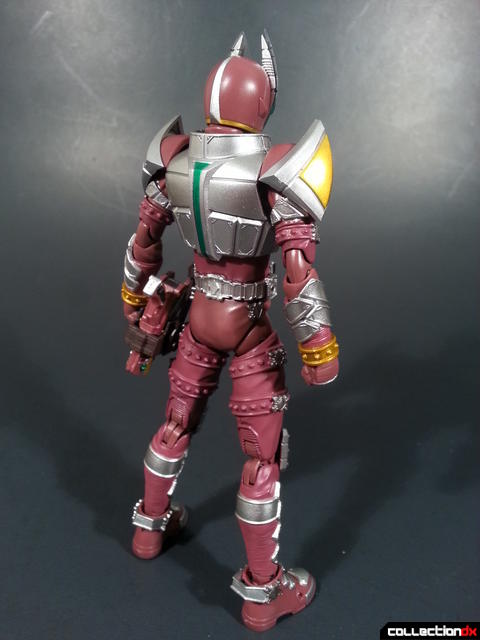 The articulation is near identical with Kamen Rider Blade's, except for having slightly larger shoulder pads that get in the way a little bit more. They don't hinder anything, but they just require a bit more time in order to close gaps in a natural way. 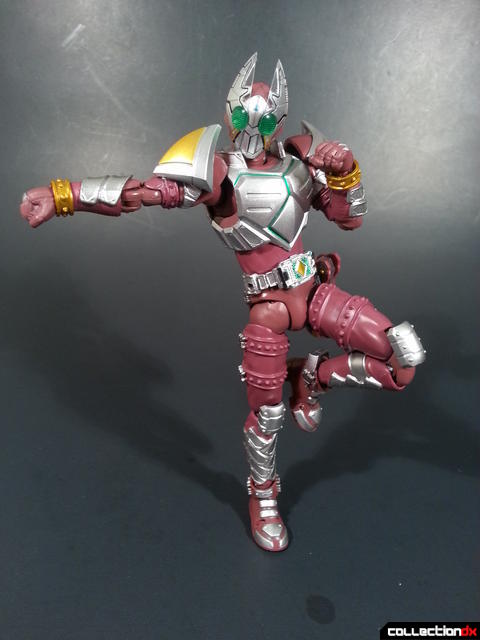 Garren has a wide array of hands and accessories, including a pair of open hands, card holding hands, splayed hands, and gun holding hands. He also includes all of his various Rouse cards, though this time I've decided to keep them in the baggie since keeping track of them is more of a headache than it is worth. They are still super nice though. His main accessory is his Garren Rouzer; his diamond-shaped gun which stores all of his cards. 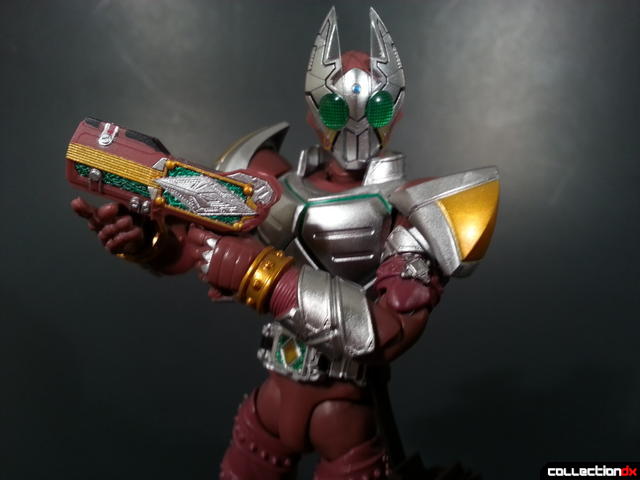 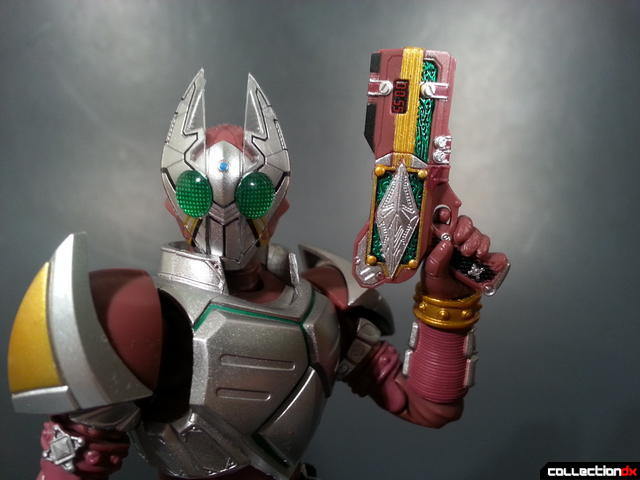 Much like Blade's Blay Rouzer, an additional piece is included to allow you to display the Garren Rouzer as if all of the cards have been splayed out. This is just a simple peg that you can pull out and swap. Unlike the Blay Rouzer, the stickers all come pre-applied and they look excellent. 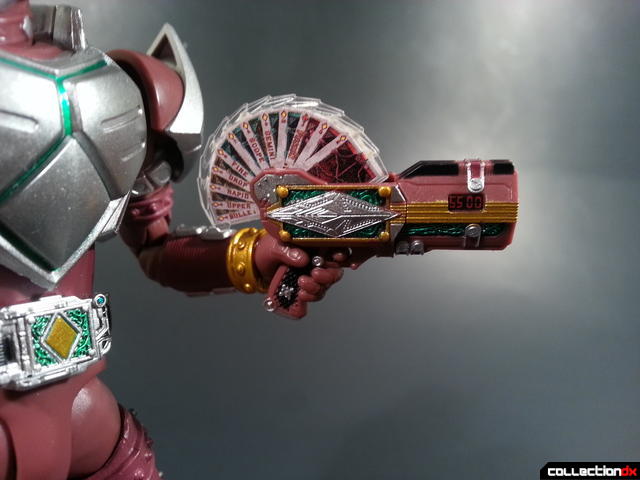 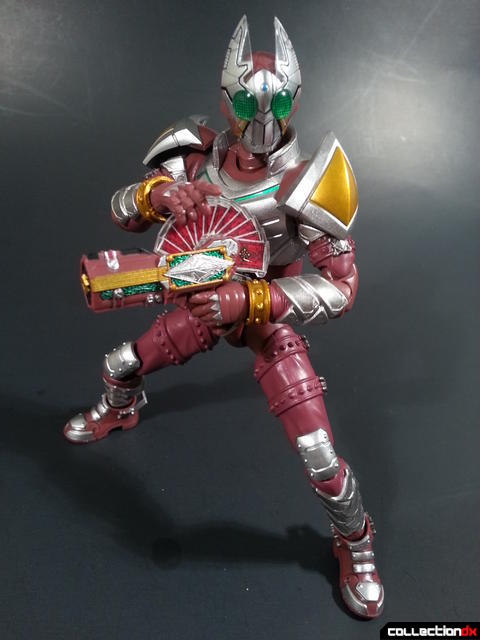 You can store his gun on his side using a holster that fits the gun snugly. The strap is a softer plastic that gives a wide range of motion for posing. 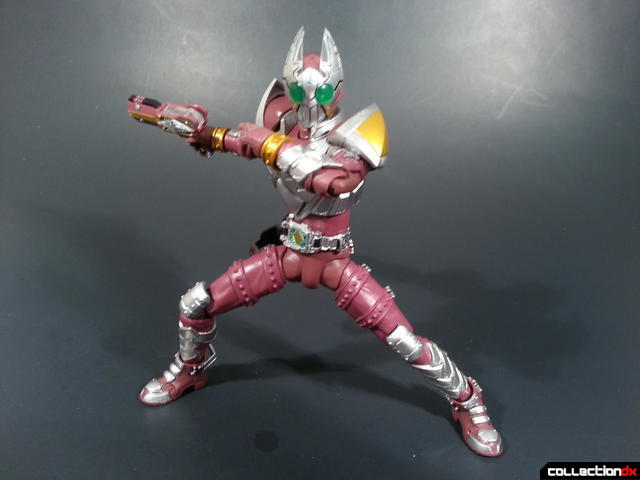 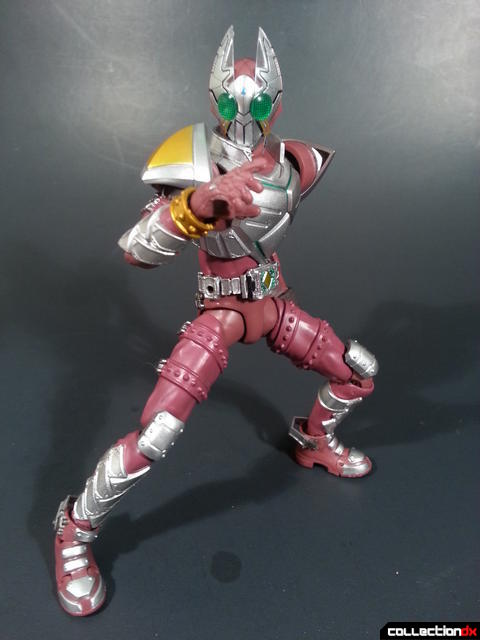 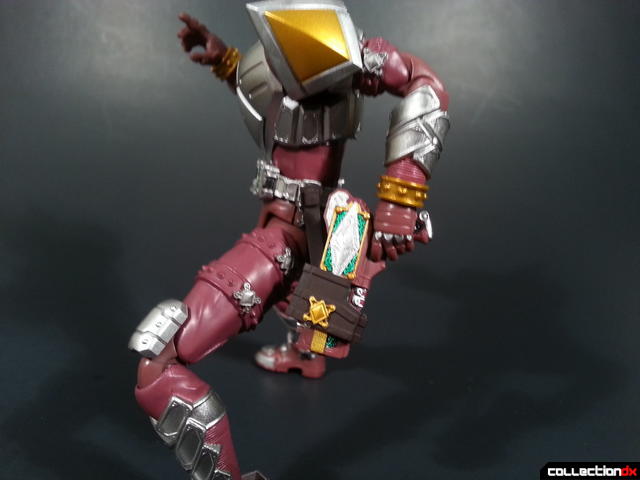 The biggest “accessory” that Garren comes with his his bike the Red Rhombus. While Kamen Rider Blade's bike the Blue Spader was a separate release, Bandai decided to pack Garren with his bike. An odd decision for sure, but hey that just means one less thing to buy! 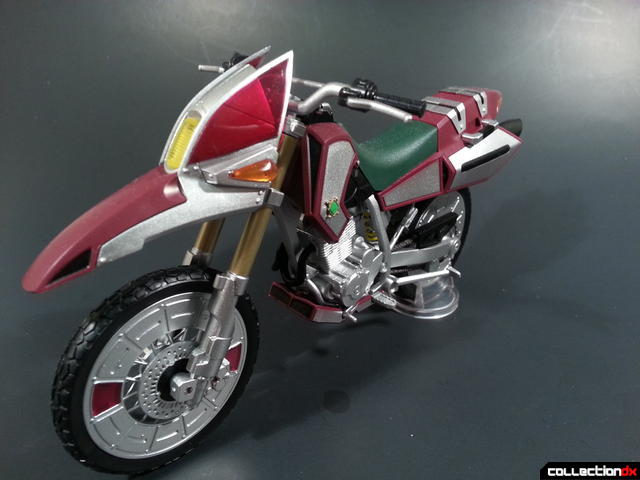 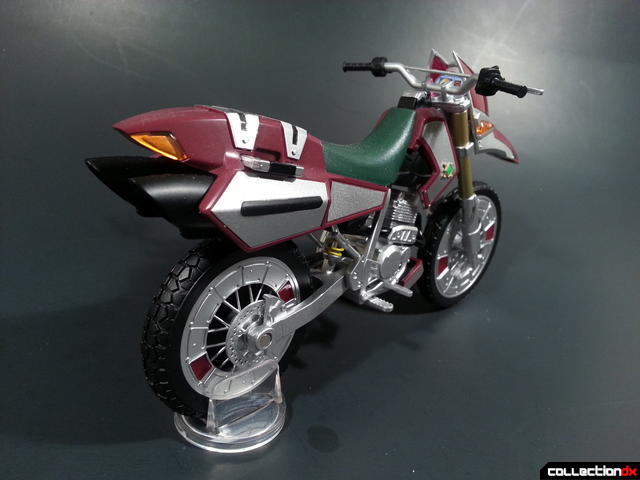 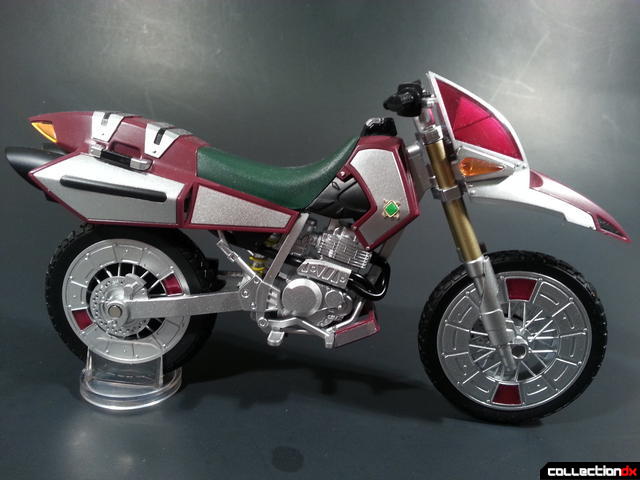 The Red Rhombus shares a lot of similarities with the Blue Spader, with a few different details in its front and sides. 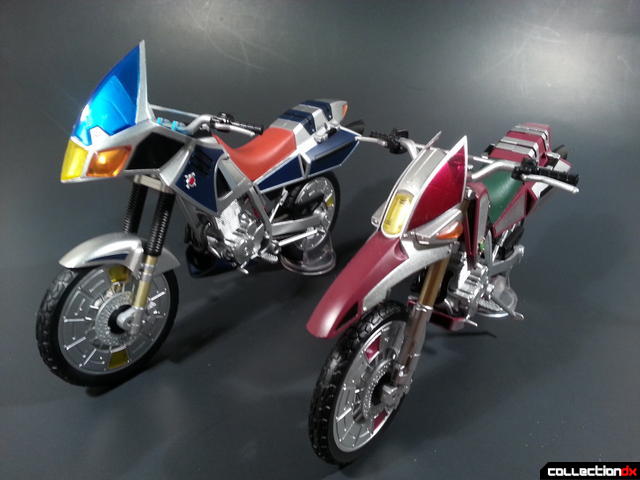 Though I prefer the Blue Spader's design, the Red Rhombus over all just feels better. The Blue Spader's bike handles were always popping off for me and it made posing Blade on it just a pain. The Red Rhombus however never gave me a single problem and it just feels like Garren fits on it better than Blade ever did. It's probably all in my head, but definitely worth noting. 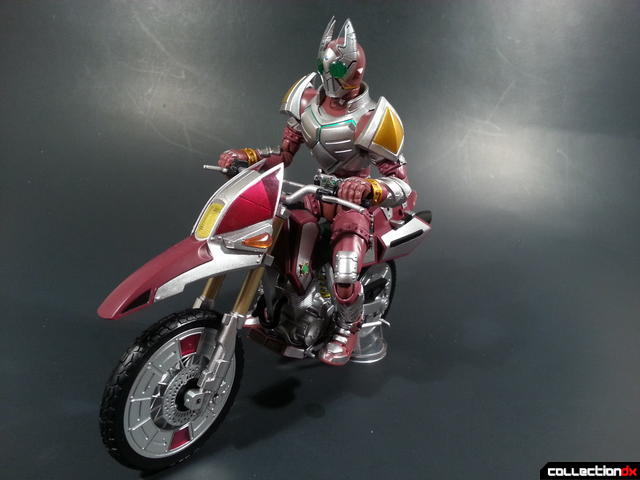 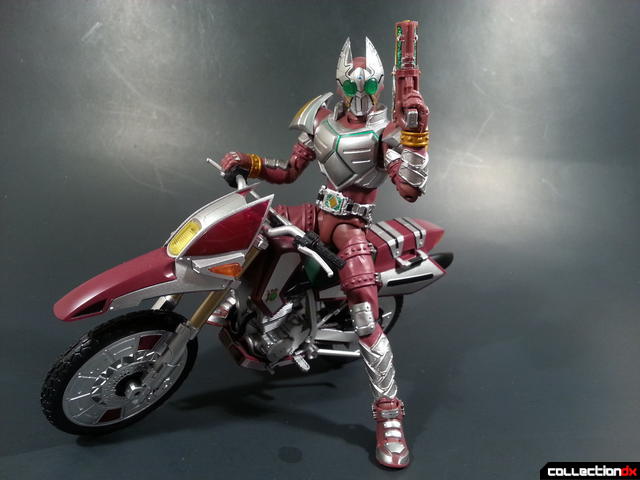 Let's get it out of the way: This set has some problems. Now this may just be some back luck on my part but it was immediately noticeable and irked me the wrong way. Despite all of that though, I absolutely LOVE this set. Kamen Rider Garren is one of my favorite Kamen Riders and for him to get a special 2-pack with his bike is like a dream come true. This comes with everything it could possibly need. The only things really missing are an extra Garren for his Burning Divide special attack, and a dead girlfriend, but that's also being super picky and also a little bit silly. For Kamen Rider Blade fans this set is a no brainer. If you're just looking for a cool set, this is a very convenient display piece all in one box as well. From what I've collected, my bad luck with some of the problems on Garren are a one off thing and should not be an indicator for an otherwise excellent piece. 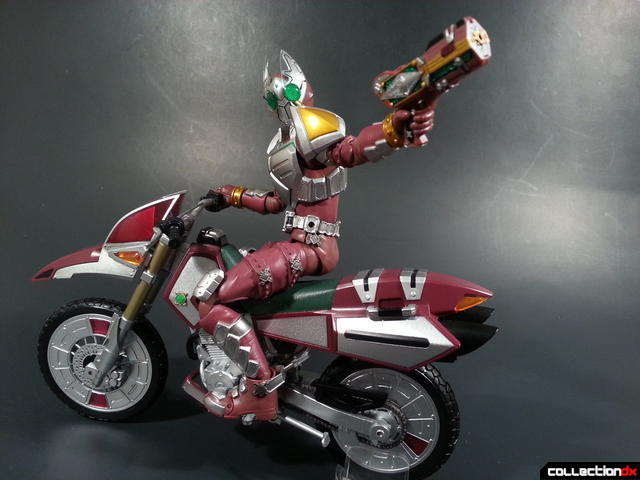 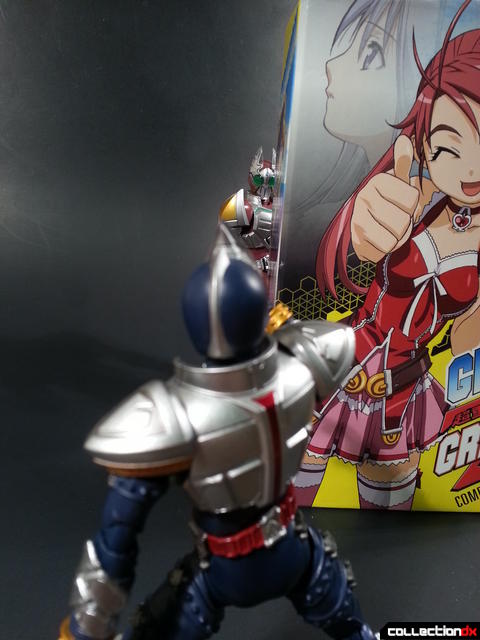