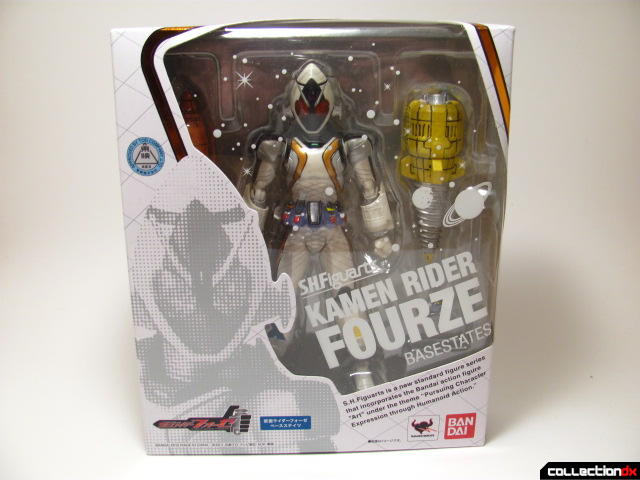 It may come as a shock to most people, but I absolutely LOVE Kamen Rider. Toei’s newest addition to the franchise is Kamen Rider Fourze, and despite the dumb name it may prove to be a real heavy-hitter. With every new Kamen Rider, a new S.H. Figuarts release is guaranteed. Occasionally, however, the first releases of new molds have been riddled with QC errors. Let’s jump in and see if that’s the case here. 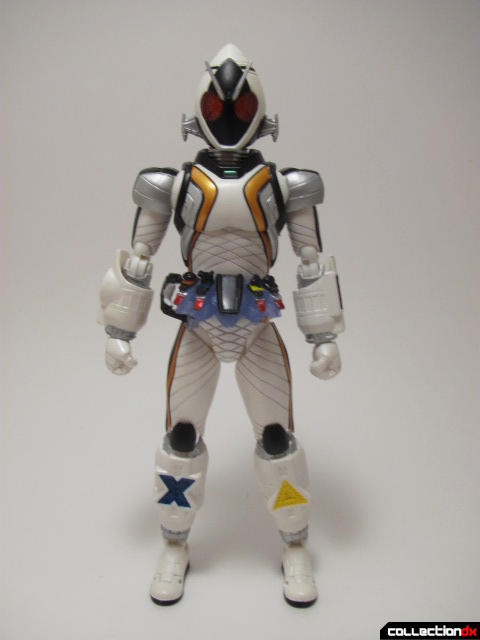 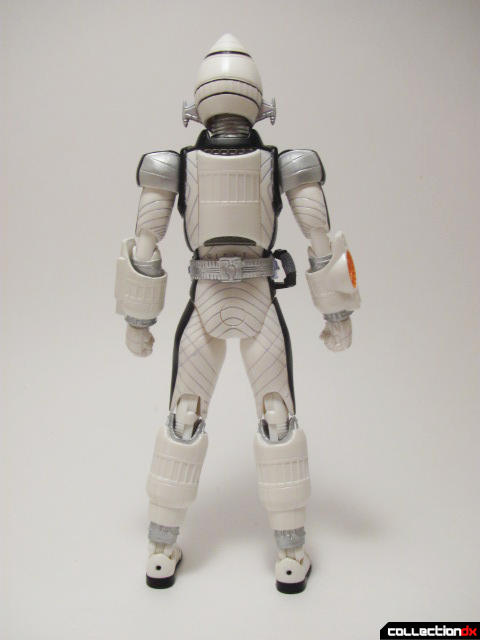 Gentarou is your average Japanese high school student, except that he fights monsters using the powers of SPACE. He also strives to become friends with everyone. In the WORLD. His ambition and determination are some of the highlights of the show, and his desire to uphold the power of friendship brings a certain charm to the series. It also helps that the direction and fight choreography are some of the best I’ve seen in a TV show since Kamen Rider W. 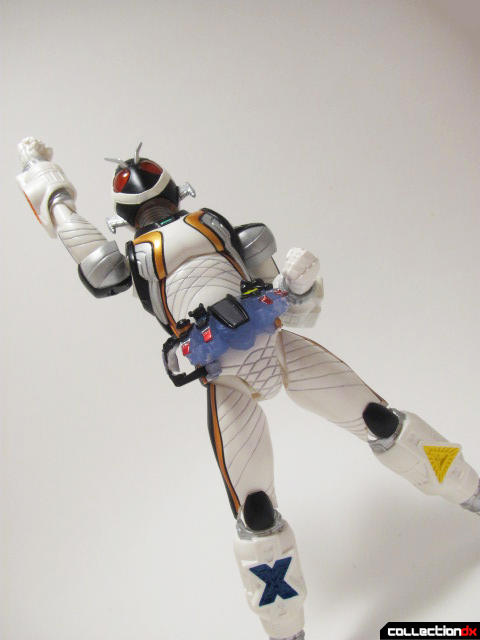 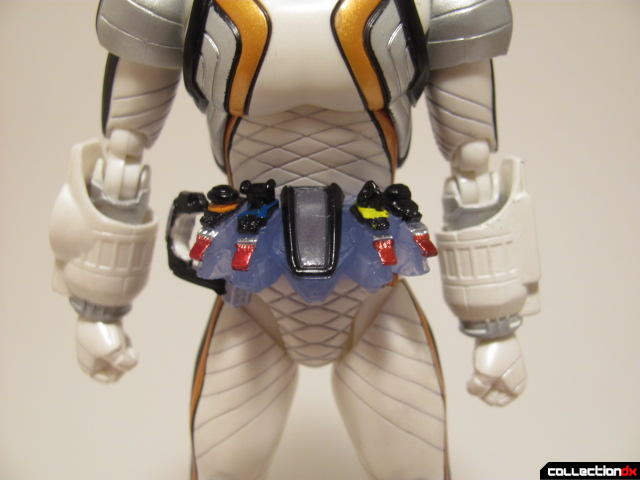 The sculpt of the figure is very nice, and it shows off every aspect of the suit. Every detail is in place, right down to the scores on his legs and waist to give off the illusion of padding. The paint on the figure is also immaculate. The scores and panels all have lining, and it looks as if it was done by hand. There is an overall feeling of excellent craftsmanship here. After looking hard for several days, I was unable to find any sort of error in the sculpt or design. The biggest flaw I could find was in the belt. Since the Astro Switches are removable, they have the tendency to fall out unless you really push them in. Luckily, this is only a minor inconvenience. 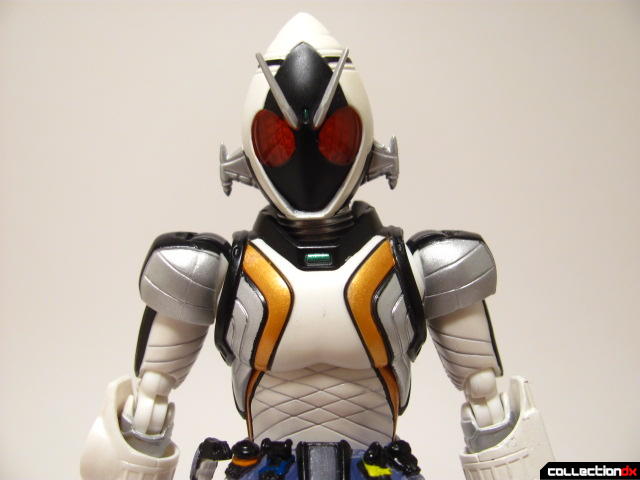 One thing that I would like to mention is Fourze’s eyes. They are absolutely stunning, mainly because I LOVE compound eyes. I mean, seriously, I could get lost in those gorgeous red balls of manliness. 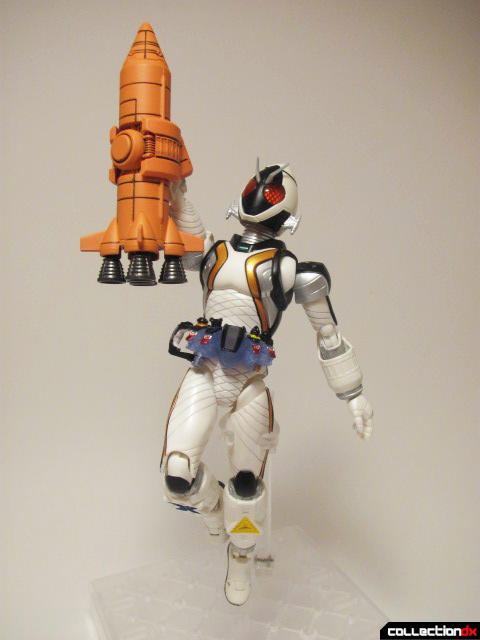 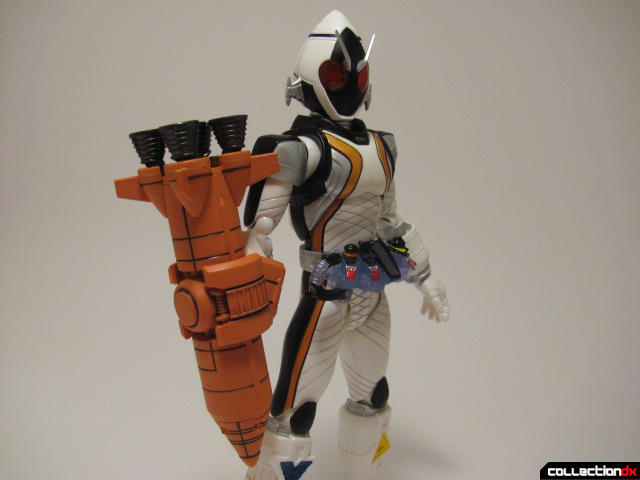 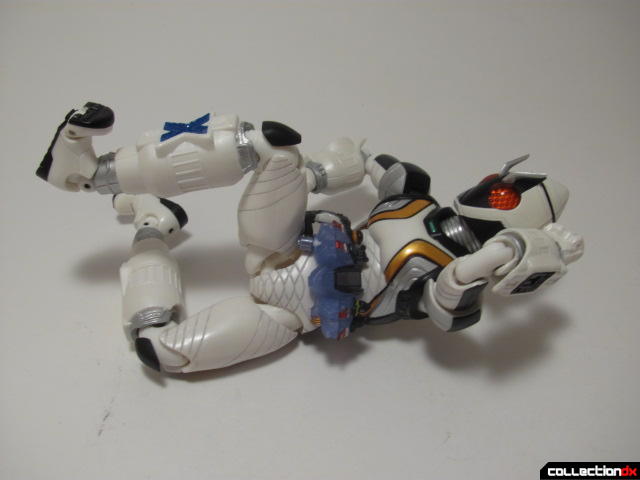 Fourze has all the articulation we have come to expect from a Figuarts release. He has two ball-joints in his neck, double ball-jointed shoulders, double-jointed elbows and knees, ball-jointed wrists, ball-jointed chest and waist, ball-jointed swiveling hips, thigh swivels, and a compound system of swivels for the feet. Because of his Module switching gimmick, Fourze also has swiveling forearms. The joints are all nice and snug, and despite his belt being huge, it doesn’t actually hinder the articulation. I thought that was a nice touch. 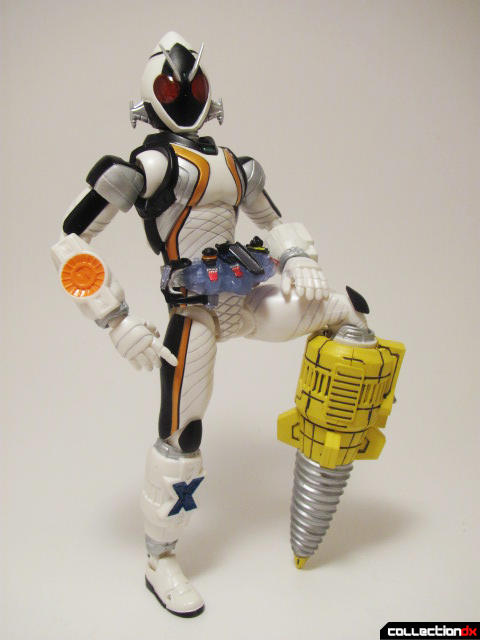 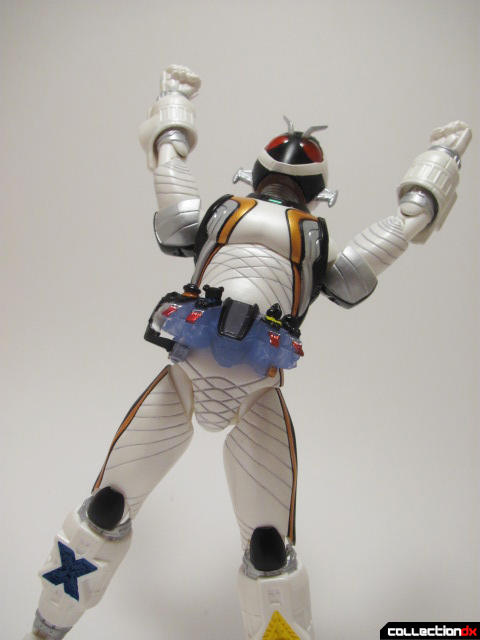 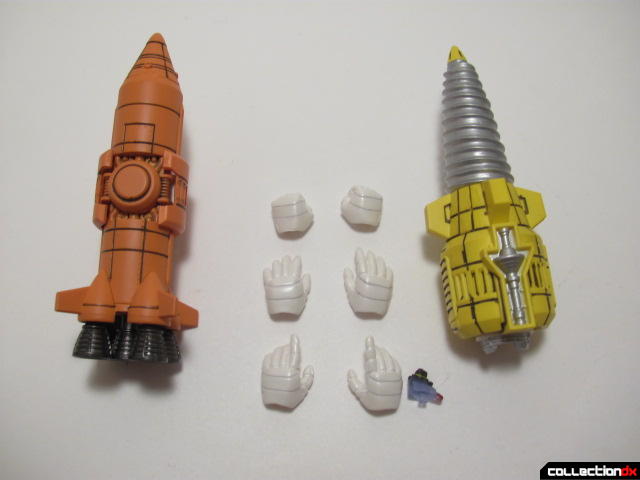 Fourze comes with a few nice accessories. He has three pairs of hands (fists, calm hands, and pointy calm hands), the Rocket and Drill Modules, and an extra Drill Astro Switch that is in the “On” position. At first I thought he was light on accessories, until I realized that Rocket and Drill were huge and amazing. The sculpted detail on them looks like it was pulled directly out of the show, and the panel lining makes the modules pop with flavor. You can switch out the modules painlessly by popping off the forearms and boots. The pegs hold everything in place nicely without making you feel like you’re breaking it whenever you switch them out. Basestates does everything you would need it to, and that’s all that matters. 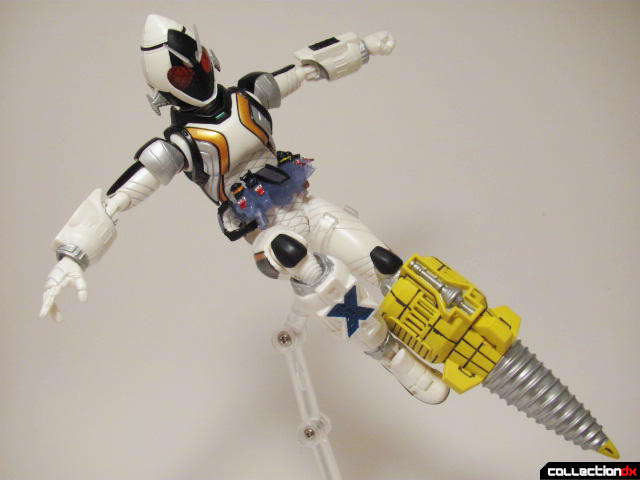 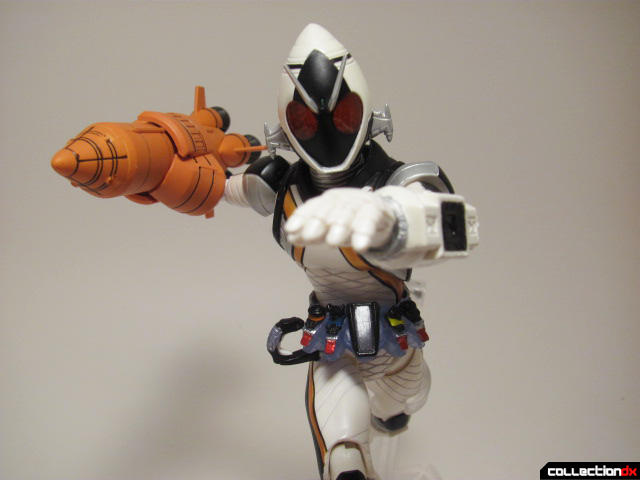 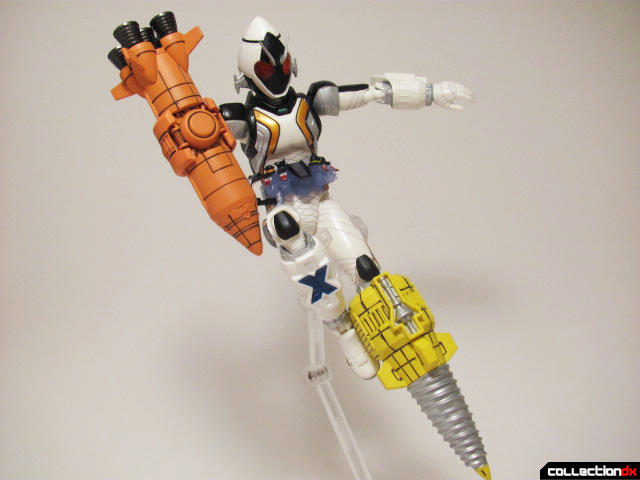 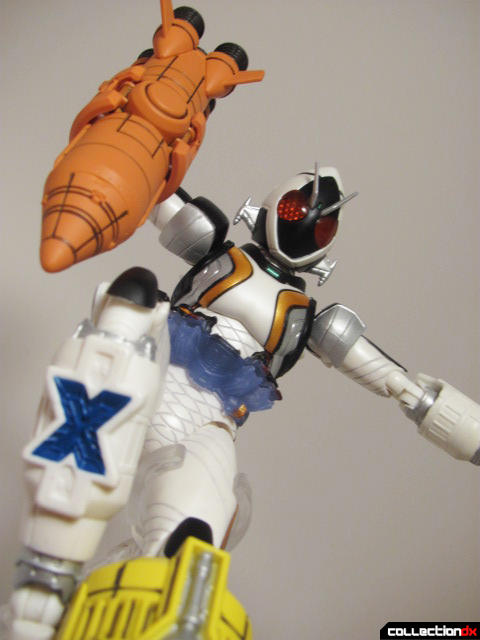 Kamen Rider Fourze Basestates is a great release, and definitely something that should be on your radar. The figure looks great, and the playability and posing options are nearly limitless. If you want a figure to represent this Kamen Rider, then this is the one to get. If you like Fourze’s design, then I highly recommend you give this release a try. I’m sure that after a while you’ll become buddies. 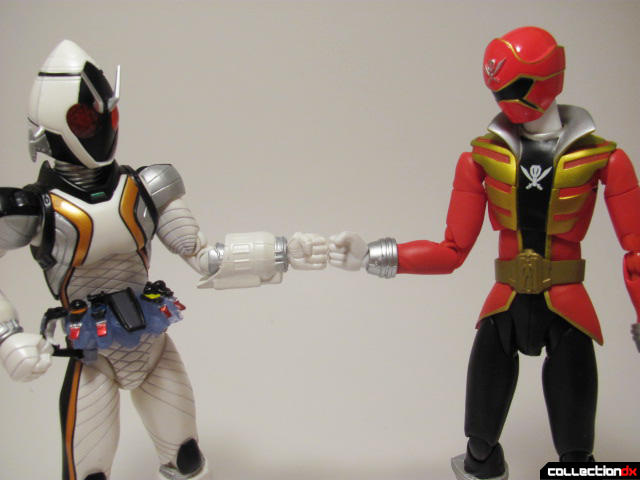 Thanks for the review, I really like the whole space theme that Fourze has going on. That helmet design gives me a fun old Buck Rogers/Flash Gordon-y by way of the Orient kinda vibe and I like it.

I agree with you fully! That derpy-looking helmet was the first thing that caught my eye when I first saw him. There's something incredibly charming about it!

The figure looks crisp... Also I'm glad that there's someone who also like Fourze...

I don't see the squeak.

But you'll smell it in a moment.

It's weird how you can work my camera better than me.