Poor Captain Maxx can't get a moment's rest. Almost immediately after being menaced by Kaiju Tripus, a new monster has hit the scene. Kaiju Drazoran is a collaboration between Max Toy Co. and Dream Rocket, who had previously worked together on a glow Balbagon.

Based on concept art by Mark Nagata and sculpted by Dream Rocket, Kaiju Drazoran was made in Japan and painted by Goto-san, who has been painting Japanese toys for over 50 years for companies such as Bullmark. To commemorate this historic collaboration, the toy comes with a special card honoring Goto-san. The card has some text about the man and the toy, but also has some neat pictures, including one of Goto-san signing the very first Drazoran he painted. For more on the making of this toy, I'll let Mark tell the story. Check out his blog entry with the concept art, prototypes, test shots, etc... here 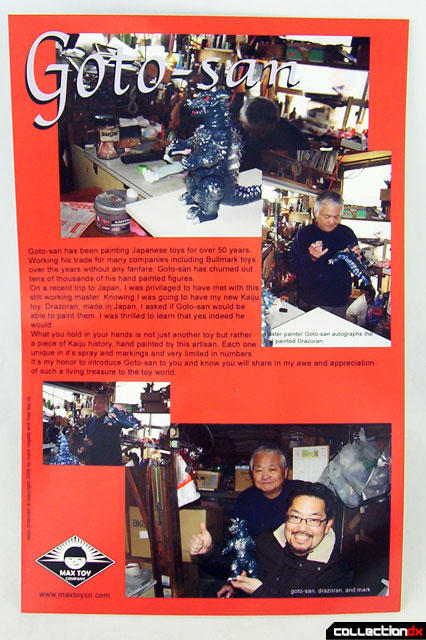 Although I think it's great that Mark got such a legend to paint his toy, I must say that the result is not perfect. The silver on the fangs and horns is obviously hand-painted and shows some brush strokes and streaks. Some might consider it sloppy, but I find it kind of charming considering I know who painted it. I almost suspect the man still has a "it's just a toy" mentality, although I don't know that. Either way, I think it just adds to it's vintage look, but I may just be saying that to justify it since I like it. We collectors have a way of doing that, don't we? 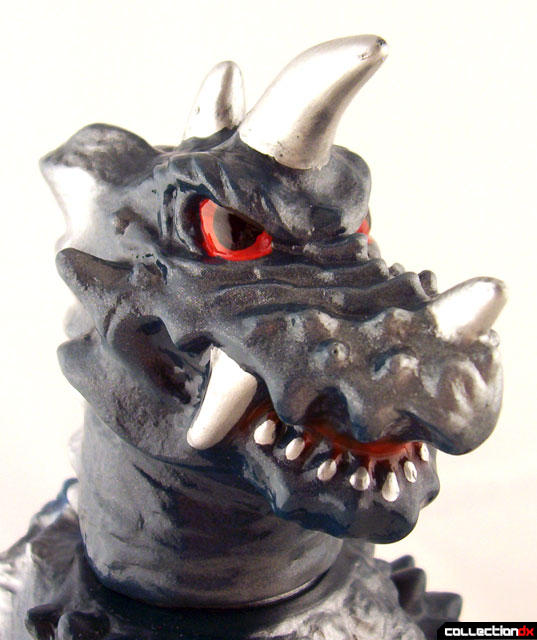 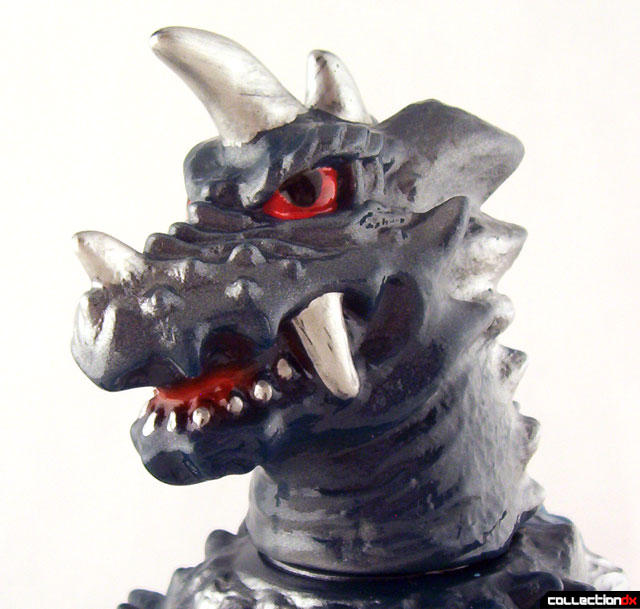 If you clicked that link to Mark's blog and read it, you now know that Kaiju Drazoran debuted in Japan and the remaining stock was offered first to Max Toy Club Members. Fortunately, I happen to be a member and was able to score one of these since they sold out before becoming available to the general public!

This toy stands 10" tall with 6 points of articulation (hips, shoulder, neck and tail). Honestly, I'm not even 100% sure what color you would say it is cast in. The closest thing I can find to it online might be a variation of midnight blue? Either way, it's got a very simple, vintage style color scheme that is highlighted by silver spray and a long streak of sharp blue down the back. 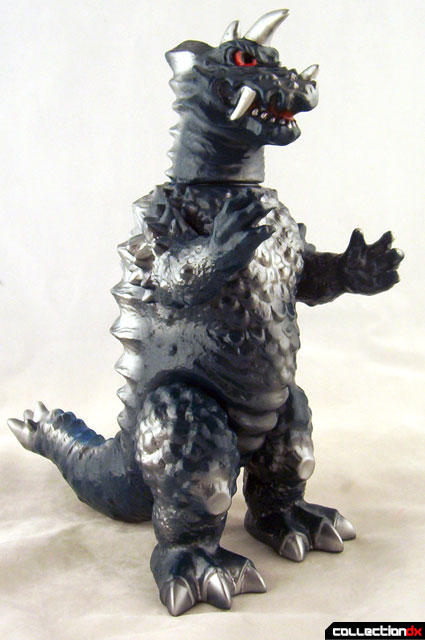 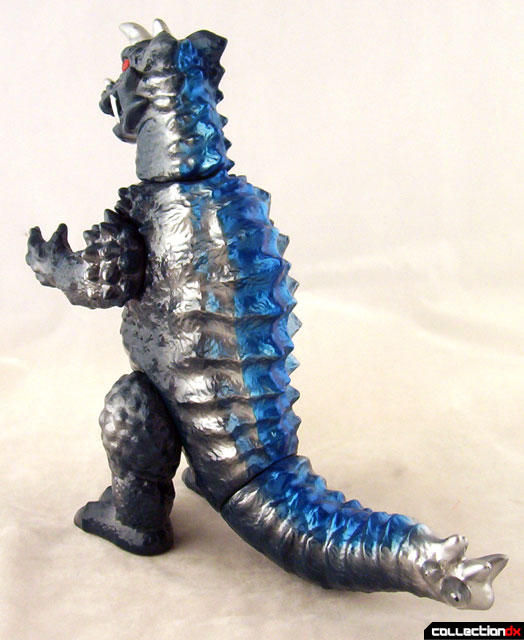 This is the first Max Toy kaiju that is based on the classic "dinosaur" style and as such it's really the most old school toy Mark has done yet. So while it may not exactly be his most original work to date, it would fit in perfectly on a shelf full of Bullmarks.

As usual, the toy comes in a bag with a header card. Now, here is where my only complaints lie. First, just for fun, take a look at the card front and back and see if you can guess what I don't like.

Yep, that's right. There's NO hole punched in the card! I've made my feelings about this known in the past and yet for some reason, Mark fails to follow my commands! Tsk.. tsk..

Furthermore, look at that small print! "Please dispose of all packaging properly." What?? Are you kidding me? Dispose of packaging???? NEVER! Oh well, at least it doesn't say "Please immediately get AFA graded".

Ok, so obviously, I don't have any real complaints about it. It's a simple vinyl kaiju in the old school style and if that's your thing, you'll like this. Of course, if you didn't already get one, you'll have to go to the aftermarket for it. Or if you want to join the Max Toy Club, memberships will be available again soon and a new version of Drazoran will be offered at that time, with a new color scheme that as of this writing is still top secret. 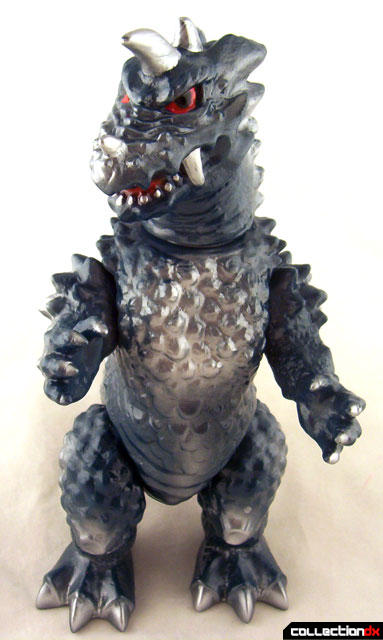 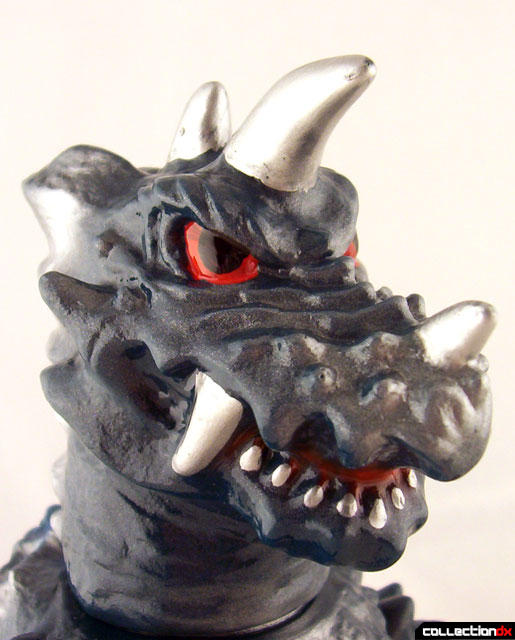 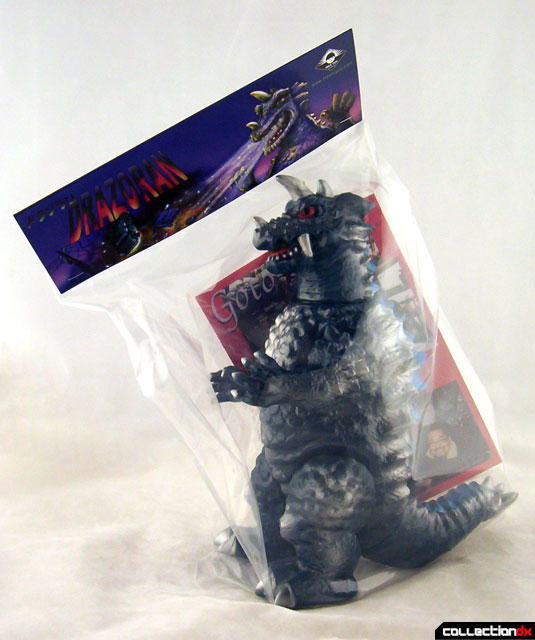 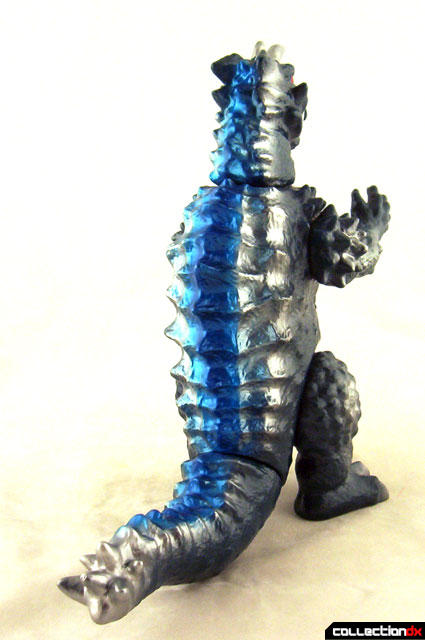 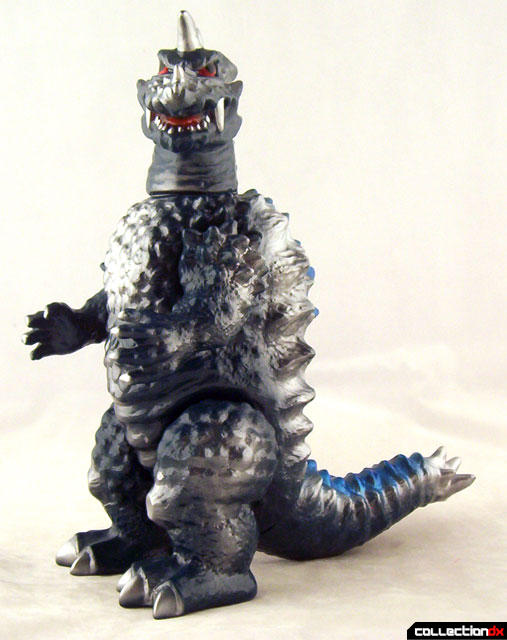 9 comments posted
Y'know, the more and more I

Y'know, the more and more I look at the pics of this beast, the more I like it. The geometry is really simple and the paint scheme/application is just SO old-school. It's sorta like boiled-down quintessential kaiju. If someone had told me that this was a vintage Bullmark figure of some obscure monster, I'd believe it. Definitely drool-worthy.

The problem is, it's so "classic", I almost shudder to think what a glowie of him would look like. It would almost ruin the vintage feel. I'm sure Mark will come up with something amazing though...

Oh, the only one beef I had with this toy when I first handled it was that the vinyl is a bit thin. He's kinda squishy in the belly area. I'm used to very thick-walled vinyl from Mark...but then again, this was poured in Japan (by Dream Rocket)...hehe...so much for vaunted Japanese vinyl! :P

Ya I agree completely with your comments ... I guess to address the paints.. while not exact or realistic as we are use to, Goto-san paints in the old school production line way.. meaning it's by hand and in fairly quick succession. As in the old days these are viewed in Japan, as child's toys ... this style of paint is exactly why I wanted Goto-san to paint them. I understand it's not to be liked by all, and his hand may not be as steady as when he was young ( he's 70 plus years old )... but I am very happy with the results.

As long as Goto-san can and is willing to paint these for me I will use him ... maybe it's like if I had Jack Kirby draw a comic for me in his later years .. again not at the top of his game, but still only as he could do ...

The vinyl, yes we had a problem with thinness in the belly section .. they've gone back on the newer runs and double cast them, meaning more vinyl in those areas .. and this is much improved. To be quite honest while I know Sanjeev enjoys the "hard" vinyl thats not how the traditional Japanese vinyl is.. the vinyl of old had give ( ok NOT squishy ) but not as hard as a rock. I've been told that the old vinyl mix can not be replicated .. they just don't use the same chemicals anymore ... whichever way it is I was thrilled to be working with our factory in Tokyo and with yet again another "old" guy whose seen it all ;-)
I'll make a report on the factory in my trip, they do stuff for many companies you guys buy and know.... and no it's not Obitsu ;-)

Noted about the hole punch .. next time for Nekro I will make a one of one, hole punched version for you !

Mark, thanks for signing up and chiming in! Great to have you here.

I agree about the paint. It doesn't bother me at all and I think it makes it look more old school. But as a reviewer, I know some people would view it negatively so I have to point it out.

When I did the review, I didn't really think much of the thinner vinyl as I've got others (mostly B-Clubs) that are similar. But when I compared it to the Balbagon (the only other Dream Rocket I have) I was a bit surprised at the difference. Another contributing factor to it I think is that the sculpt of the waist naturally curves in there, so when you squeeze it is gives more easily. Again, doesn't bother me much since I just put it on the shelf and admire my toys. But some would be turned off to it. Overall, I still prefer the feel of this to the ones made in China.

As to the header card, it's cool. As long as I get mine before Sanjeev, I'll be opening them to review anyway. ;)

I just want to say that I love your websites a whole lot. They're right down to my alley.

However...I instantly hate one of your links which is a shame

I'm glad that he mentioned you on the toy list, but....the rest of his hype-stuff...sucks!

Your website is amazing and originally fantastic and innovative. They're great and smart.

Giaco Furino if your reading this....your Top 5 Star Trek Dream Directors stunt is absolutely stupid....If I were the EIC...I would F****ing fire you or reprimand you for incompentent, lazy writing.

This is why I hate internet fanboy-media....They lie & gossip too much in a very annoying fatuous way.

Mark! Thanks so much for chiming in!

Yeah, I think having Goto-san paint these is a stroke of genius. I love the colorway and I think his paint application is perfect for the style of the whole figure.

Mark, could you give us some info on the numbers of these figures? I mean, I assume Dream Rocket will be pulling ALL the Drazoran figures. That implies that they'll be produced in fairly low numbers, just like other Japanese designer vinyls. Does this further imply that we're not going to be seeing Drazoran colorways show up at Newbury Comics and other such kitschy shops?

Are you dumping the Chinese factories altogether and going with more limited, genuine Japanese vinyl releases from now on? Are my questions getting annoying? ;)

"Are my questions getting annoying? ;)"

When it comes you Sanjeev...absolutely, positively NO. Cause you got a talent for making all the right moves.

I ask the tough questions! Hey, it all goes into being a good toy journalist, right??

Probably only Sanjeev knows this but i don't follow the boards at all, so I did not see his replies above until he emailed me ;-) d-oh !

Mark, could you give us some info on the numbers of these figures? I mean, I assume Dream Rocket will be pulling ALL the Drazoran figures.

### actually it's the factory Dream Rockets uses will be making them but yes they have the molds ;-)

That implies that they'll be produced in fairly low numbers, just like other Japanese designer vinyls.

### correct, the numbers are lower than my other releases, but in line with say the TriPasu I did.

Does this further imply that we're not going to be seeing Drazoran colorways show up at Newbury Comics and other such kitschy shops?

Are you dumping the Chinese factories altogether and going with more limited, genuine Japanese vinyl releases from now on?

### Dumping ? that's kinda harsh .. ha-ha, no I would use them depending on the project. I prefer to use Japan, but it really depends on the project and how many will be made. Each place offers pros and cons to toy production .. these dealing with costs, quantities, type of material used ...

Are my questions getting annoying? ;)

There are a countless amounts of Kaiju that are dinosaur/reptilian based and to me, that's a good thing! This guy reminds me of Black King from one of the Ultra Man shows. As for the artwork on the card, who did it and where can I find more of his work?