I dunno what it is about mechanized kaiju, but I just have a soft spot for 'em. I guess it's sort of a marrying of two concepts I absolutely loved growing up: giant robots and giant monsters. My favorite all-time kaiju is definitely showa Mechagodzilla...but Mogera from The Mysterians (1957) is definitely up there, too!

In my opinion, this movie is highly underrated. Sure, it's campy goodness with cheesey special effects, but that camp and those effects are done right! Toho created something special with this flick. It's a classic alien-invasion story, where the Earth needs to fight off a dying, but powerful, race called "the Mysterians". Can't get much better than that!

Well, it just so happens that among this race's super-weapons is a giant tunneling mechanized mole called the "Mogera". Now, it's not too clear in the movie how many Mogera's the Mysterians possess, but it's clear that they have at least two--after the first is destroyed, a second is seen burrowing through the ground during the desperate final battle. 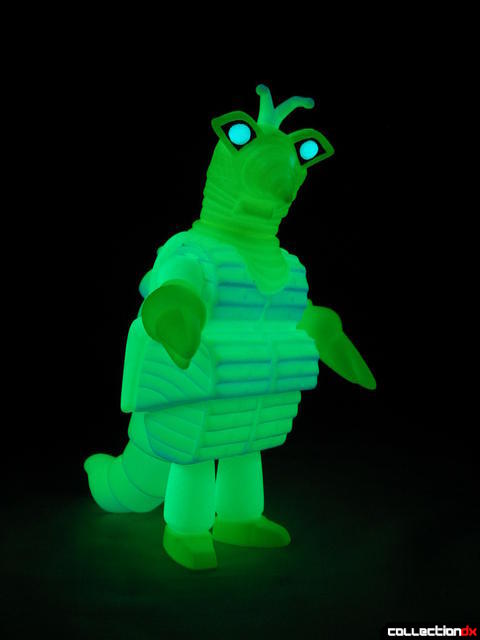 The effects involving this kaiju and other battle scenes in the movie are pretty amazing for the time. Many of the scenes take place in broad daylight, as opposed to more common nocturnal fights in contemporary monster films, where shortcomings in special effects are often conveniently obscured by the darkness. Instead, the makers of The Mysterians opted for clear, well-lit, elaborate effects that involved some of the best miniature work Toho has ever produced.

My buddy, John Groff of KaijuZoo, was seven years old and living in Japan as a USAF brat at the time this film came out. He's got some great memories of this film! In fact, it was his own custom glow Parababy Mogera that inspired me to create mine! Anyway, this fun tokusatsu adventure is definitely worth checking out. [Click here for Amazon.com's page for Tokyo Shock's US dvd release of the film.]

Now, this particular toy started out as Marmit's unpainted glow Parababy Mogera that I picked up from Y!J for short money. Precious few vinyls exist of the final film version of this kaiju. The classic Bullmark sculpt of this character actually depicts the early concept/prototype version that was obviously modified quite a bit by the time the movie was filmed. Finally, earlier this year, Marusan released a standard-sized film version Mogera (including a glow version that you know I picked up!)...but for the longest time, the only non-deformed, standard-ish sized, glow-in-the-dark game in town for movie Mogera was this Parababy.

And I was not to be denied. 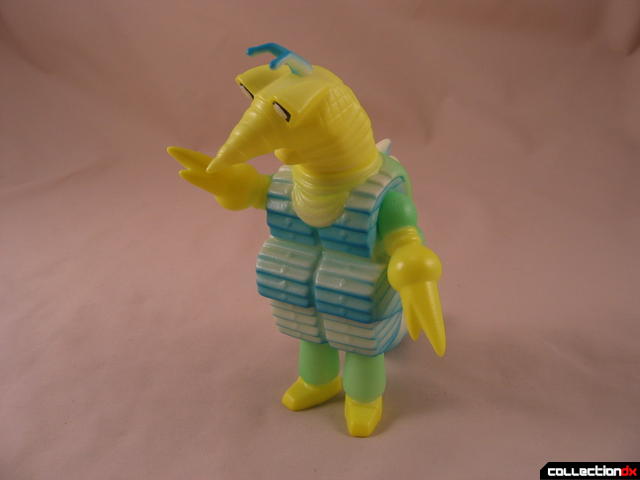 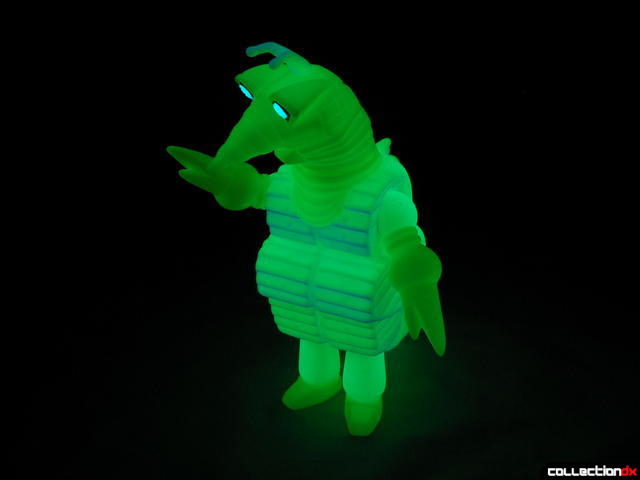 This was actually a really fun project for me! Obviously, my love for the subject is pretty clear. The smaller size of the figure (6" or so) made for simpler masking and quick spray sessions. My primary tools included my precious Parafilm M for precision masking, and glow hand- and spraypaints from Ready Set Glo. 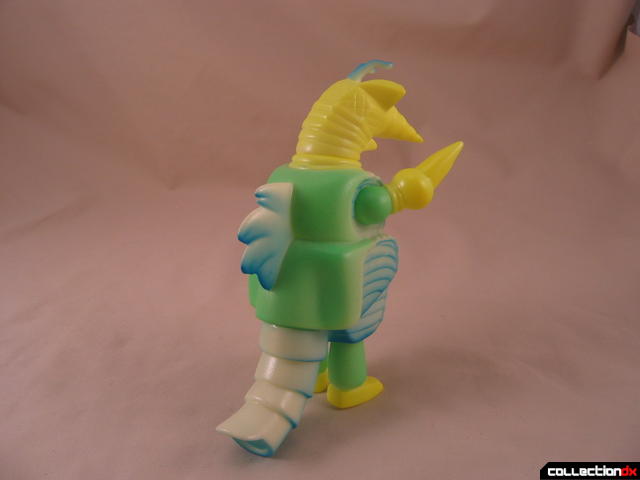 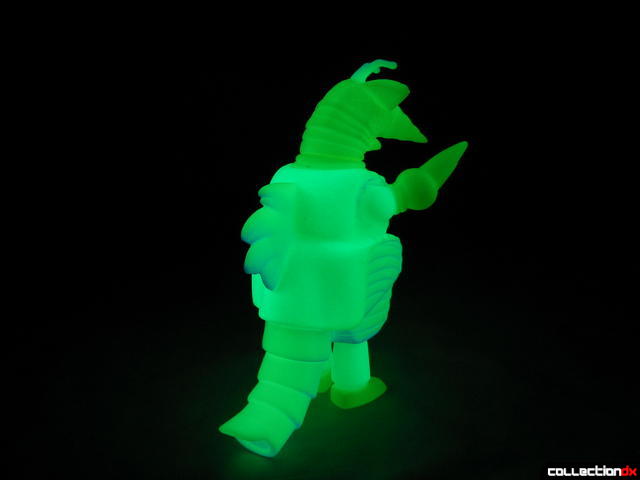 I kinda dig the results! Essentially, I wanted to recreate the movie colors of the kaiju as closely as I could with the glow spraypaints--which was NOT easy! The upper portions of the limbs and the back carapace had a greenish hue in the movie, so I obviously hit them with green. The feet, hands, and head were primarily gold/bronze, so I used yellow. The antenna, main body, and circular saw blade on the back were silver....so I gave them a quick, uni-directional spray of blue up from the bottom. The last paint application was aqua hand-paint used on the eyes, surrounded by black acrylic paint (to simulate the look of the kaiju when firing its eye-beams in the movie). Finally, I sealed everything up with Minwax Polycrylic semi-gloss spray. 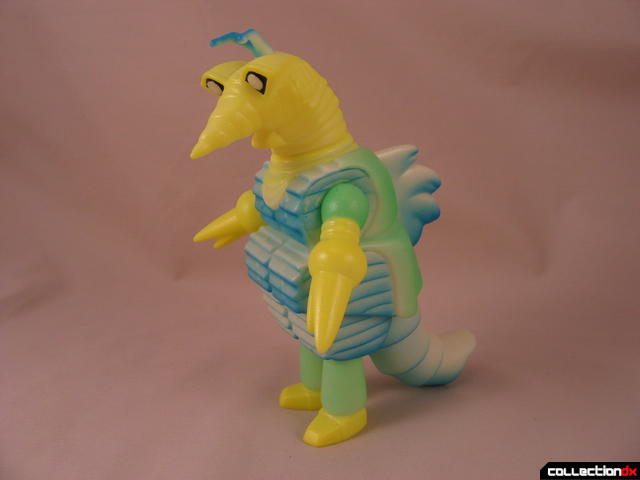 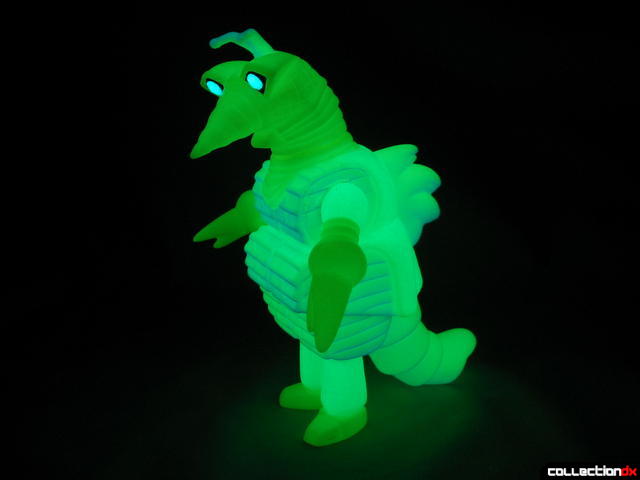 Believe me when I tell you this: the figure glows bright as hell! And this is coming from a guy who owns well over a hundred glowies. It's pretty crazy--glow paint on glow vinyl is just deadly. The glow paint, itself, adds to the glow of the vinyl...and actually enhances it. Not only does this figure now glow much brighter than a regular glowie, but it actually glows much longer! Unfortunately, it's tough to capture the color difference among the different paints while glowing due to camera limitations, but they really do appear very distinct. The yellow and green paints glow different shades of green, but the blue glows a very vivid medium blue...and obviously, the aqua eyes look absolutely electric! 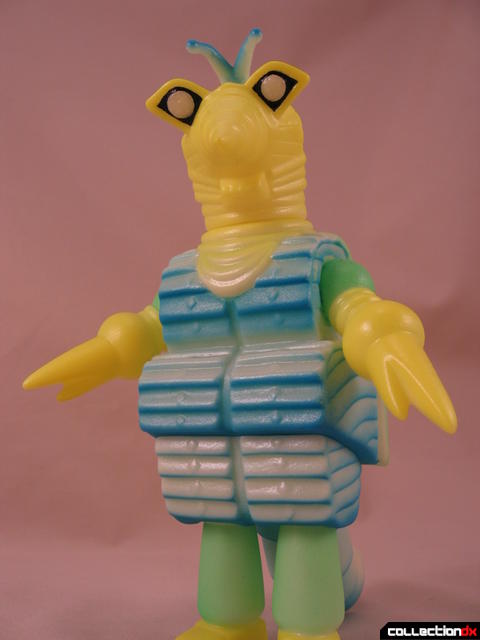 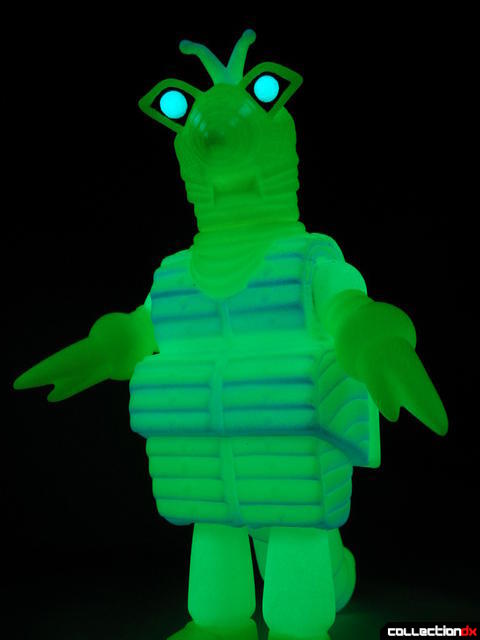 I actually had to tone down my exposure time for the glow shots! Normally, I use a 15-second exposure time for glowies...I tried that with this figure and the shots ended up looking like a ridiculous, bright-green blob. Cutting down the exposure time to 5 seconds did the trick! 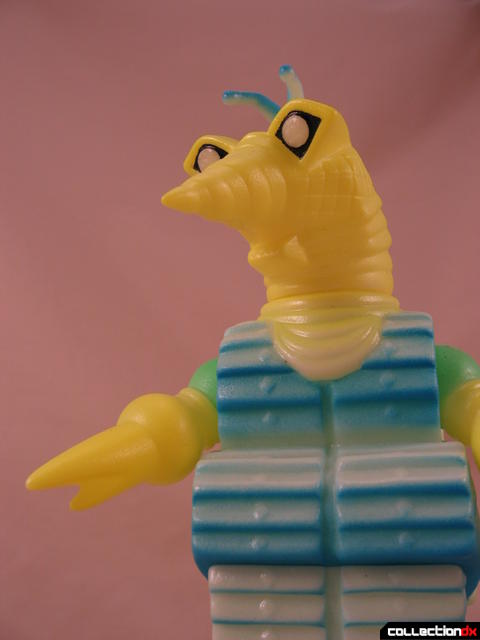 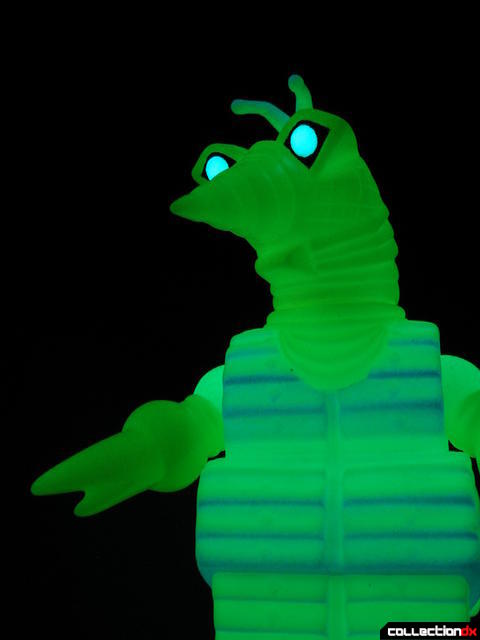 Tokyo Shock's release of this movie is really a must-have. If you told me 5 years ago we'd have region 1 DVD's of non-Godzilla Toho flicks I'd have said you were crazy,yet now we have Varan,Yog,Matango,and this,and I believe they're doing War of the Gargantuas,too.And these aren't the PD VHS's of yesteryear,folks,these are high quality releases.

War of the Gargantuas would be slamming. Incidentally, it'd be nice if Classic Media got back on the ball with releasing the Godzilla films. I hear the next batch is going to be way outta order...Godzilla's Revenge and The Terror of Mechagodzilla.

But at least Tokyo Shock still seems to be going strong--I just picked up Latitude Zero...corny as hell, but how can ya go wrong with Caesar Romero!? ;)