Hey, all! Sanjeev here, back again with another custom glowie by yours truly! Some of you may remember my first custom glowie, the Marmit Vinyl Paradise Garamon/Garadama piggy bank that I finished in glow spraypaint a while back. Well, when the opportunity to pick up a cheap M1 Giant Sized Garamon in unpainted glow vinyl came up, I hopped right on it knowing it would look great along with the Marmit! 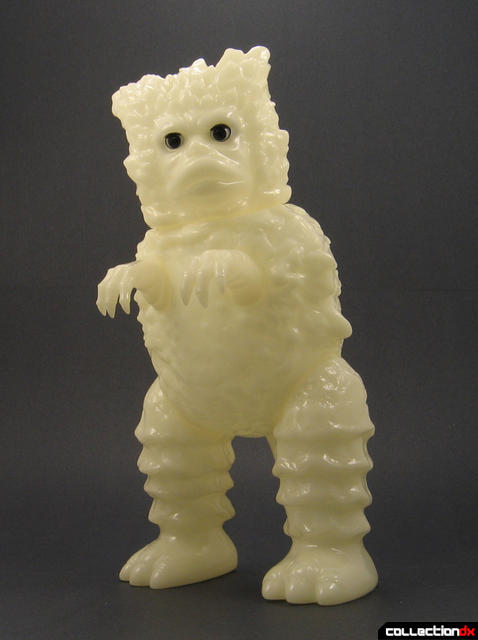 Now, I got the inspiration for this figure from Nekrodave, who picked up the blue spray version of this figure some time ago. And y'know something? He was damn right: this is one creepy figure. The babydoll eyes are just weird! I LOVE IT!!

So, just as before, I grabbed my trusty glow spraypaints from ReadySetGlo and my Parafilm-M (for masking), and went to town! 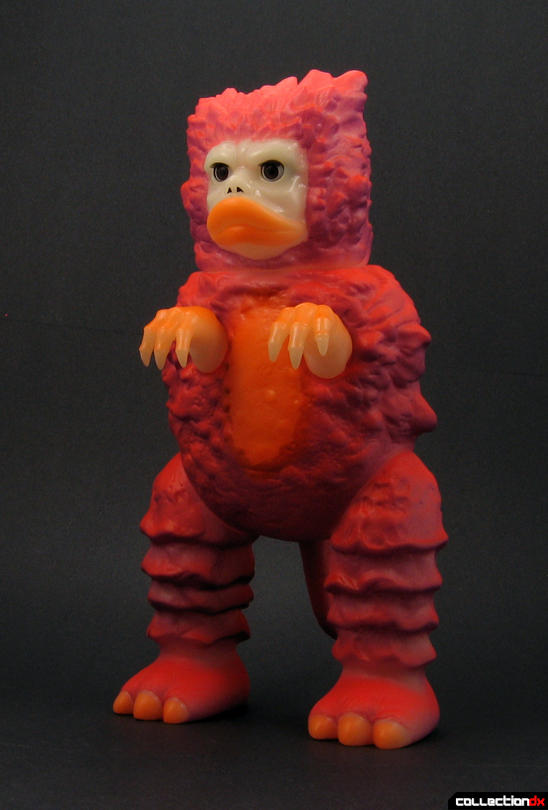 The results are pretty killer, if I do say so myself! ;)

My creativity was a tad hampered by my previous efforts since I wanted this figure to match the piggy bank in terms of color scheme. If I hadn't painted up the Marmit previously, I would have tried a more daring color scheme (maybe blue or pink and yellow). As it is, however, I still dig it. It came out well, I think, and any experience with these tricksy paints is valuable (you may recall, my only other endeavor with glow spraypaint was Daimajin). The stuff's real tough to work with... 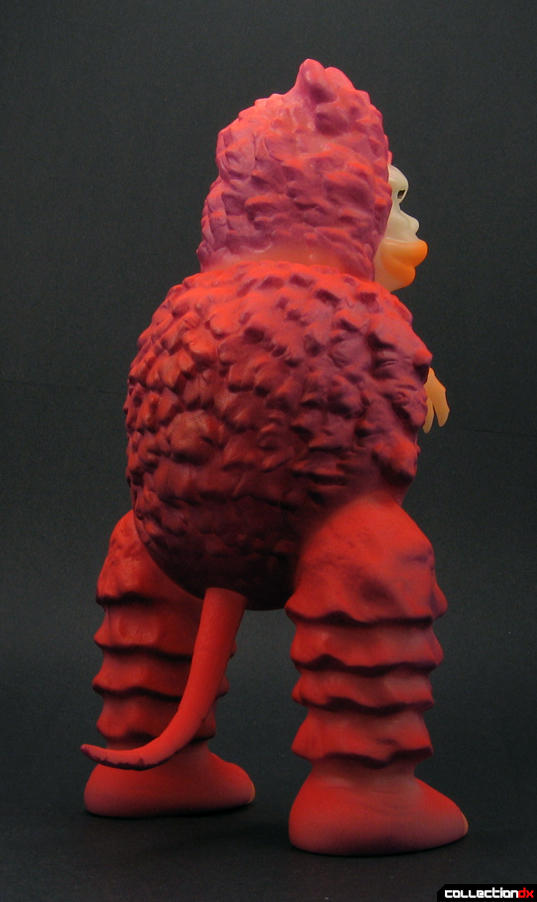 So, sticking with the red color scheme begun with the piggy bank, I tried something I learned with Daimajin: I sprayed down from above with red spraypaint after spraying up from below with purple (this sorta complements the red I used on Garamon and the purple I used on Garadama for the piggy bank). 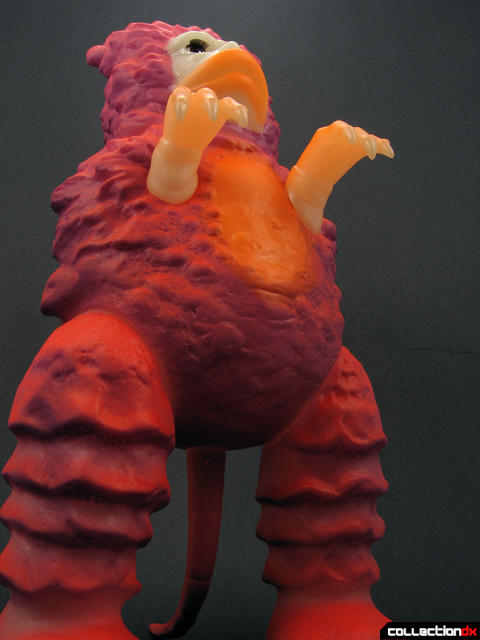 The overall effect is pretty cool! If you notice, I also masked off the middle of his chest with torn masking tape to make an interesting pattern. Over the gap, I blended in orange glow spraypaint, again to match the piggy bank.

As you can tell, I touched up his nostrils with black acrylic--he kinda didn't look right at this scale without it. And finally, I masked around the face, hands, and feet, and sprayed his lips, toes, and tops of his hands orange. 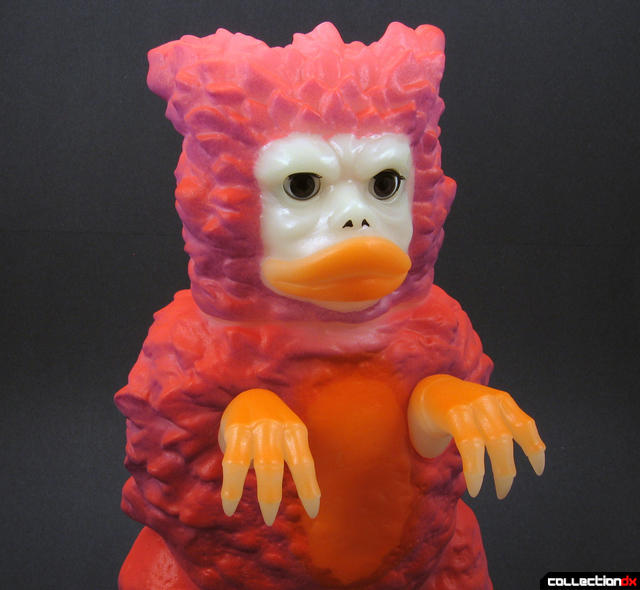 One of the last steps, of course, was sealing the paint job. As before, I used Minwax Polycrylic: three quick coats and some light brushing to remove excess dust, and I was pretty much done. The only thing I had to be careful about was the eyes. I had to cover just around the eyes with a good seal to protect the mechanisms from getting gummed up with the varnish. Worked out great, see!? 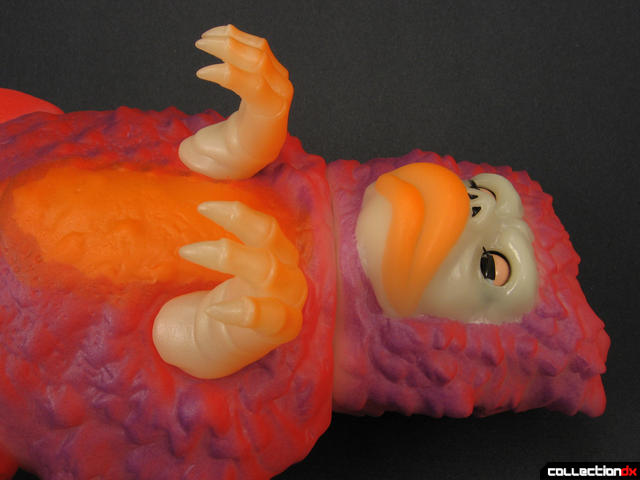 Aiight, aiight...I know what you're saying: enough yappin', let's get to the glowie shots! 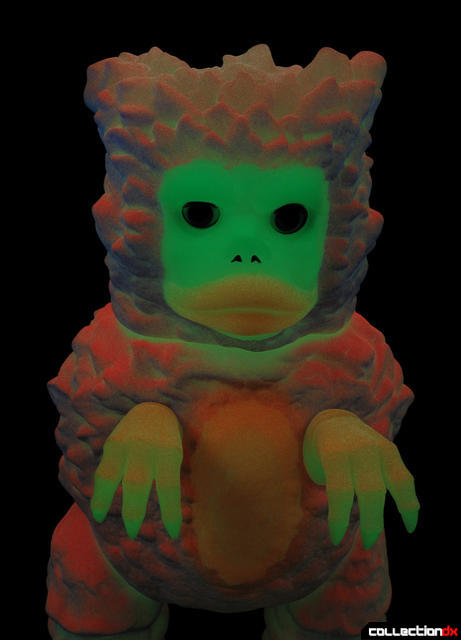 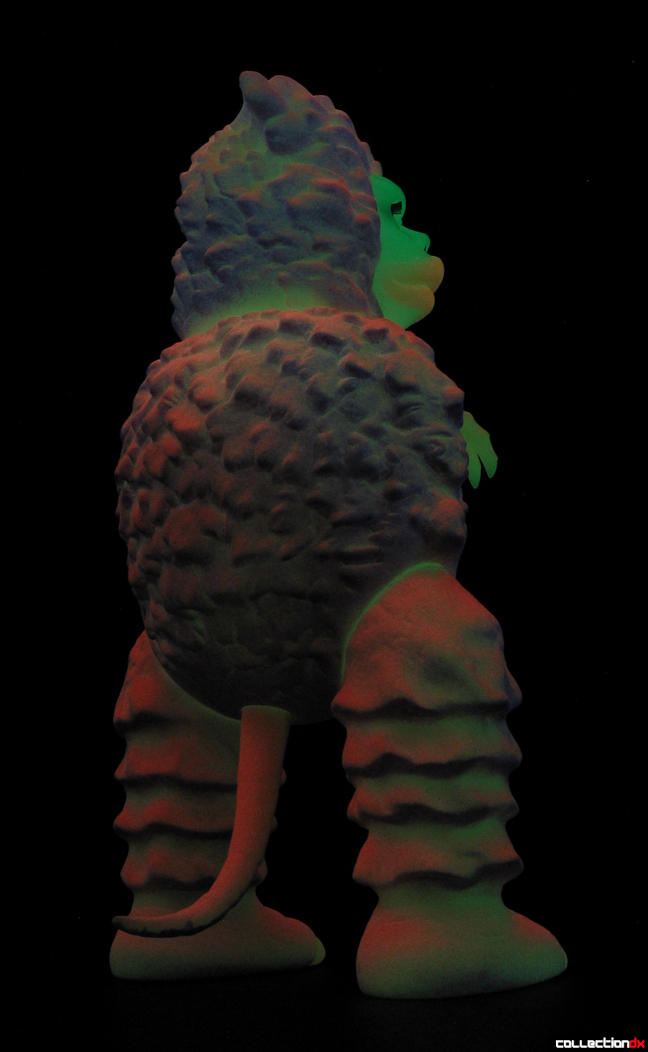 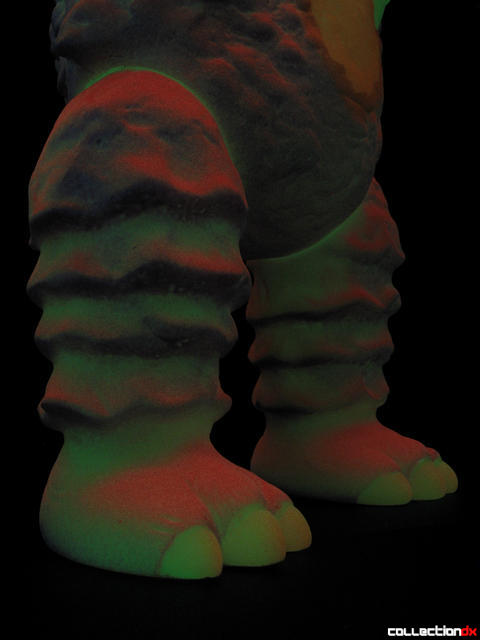 Not a bad effect at all, huh? When fully charged, the red glow color glows just as long and intensely as the bare glow vinyl. The orange and purple, however, last a little bit longer. The effect over time is pretty cool: the green glow vinyl and the red dim a bit after a while, but the orange stays a bit brighter...and the purple undertones on the down-facing surfaces glow a bit brighter blue.

My spray coats were a bit thicker than I would've liked, but it creates a stronger, more contrasting look under normal light. Even a little too thick, the glow effect of the paint matches well against his face and other exposed bits.

Finally, I'll leave you with a group shot! From left to right, we have the Popy/B-Club reissue of the original Bullmark mold, the giant M1, and the Marmit piggy bank: 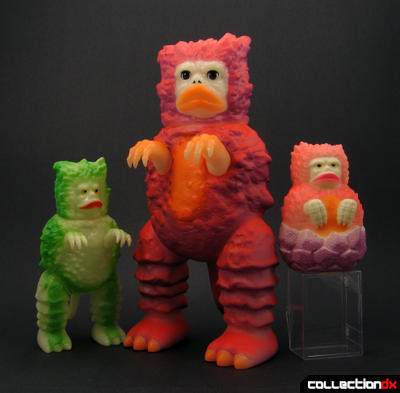 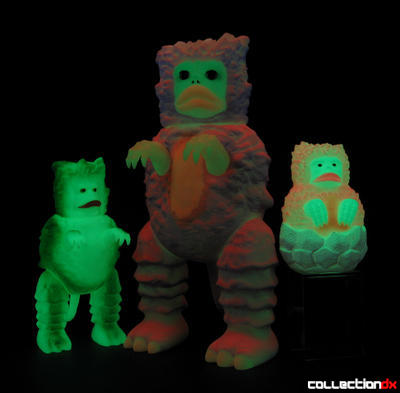