Review sample provided by Bluefin and available at BigBadToyStore.com

A bit of info on the anime Mashin Hero Wataru according to wikipedia:

"The story is about a 9-year old boy named Wataru Ikusabe who is magically transported to a magical realm of the gods called Soukaizan, which he is supposed to save from an evil, demonic ruler. The series incorporates many elements of RPG games including dungeon levels and quests for mystical objects. Soukaizan itself is represented as a series of tiered platforms each floating above the one beneath it in a rough pyramid shape. In order to progress to the next tier where he will meet the series' ultimate villain, the show's heroes must complete some task on the one beneath. In his quest to save the realm, Wataru manages to transform a clay sculpture into a somewhat autonomous (and small) Super Robot. He also befriends many of the Soukaizan natives, and forms some very strong friendship bonds. The term Sou-kai-zan can be broken down to its 3 parts: Sou (creation), Kai (realm, space, world, or universe), and Zan (hill or mountain), representing the pyramid shape of the world's level." 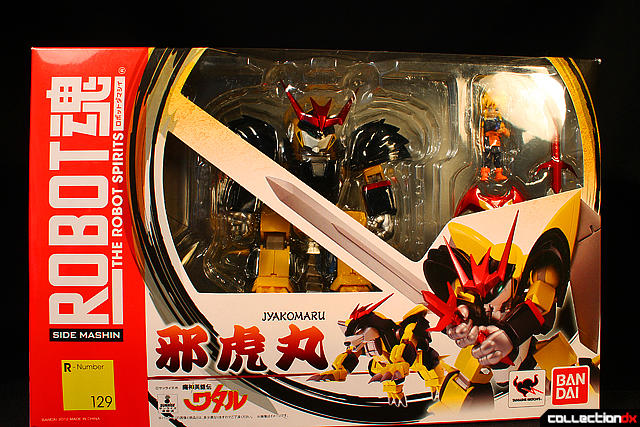 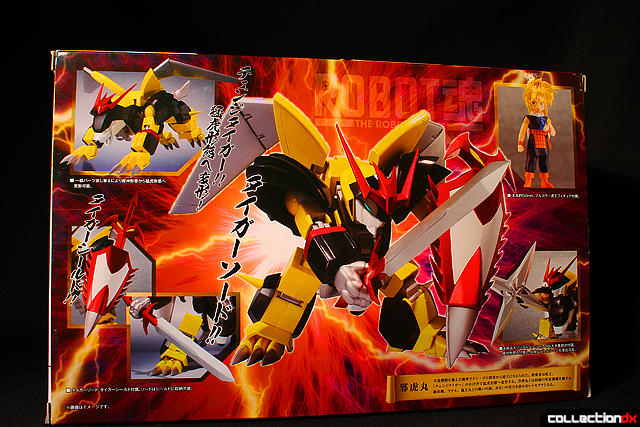 Once out of the box, you are met with an impressive figure. Jyakomaru hit your senses with a vibrant yellow and contrasting black plastics. The figure requires only attaching the wingset. 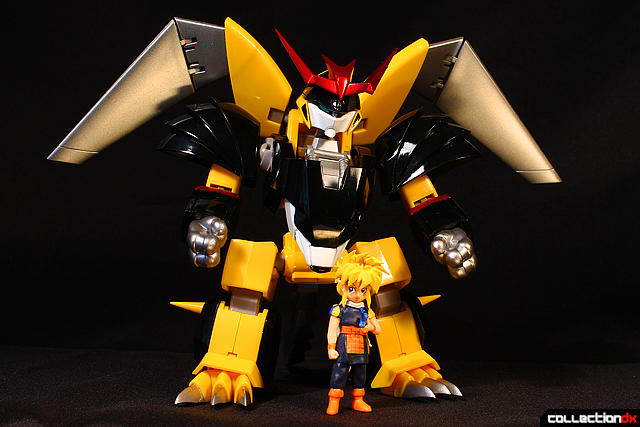 Also included is a small PVC figure of Tora-Oh. For such a small figure (less than 2"), he carries incredible detail and paint applications normally suited for figure many times his size.

Jyakomaru's face is rather plain but looks the part. I like the metallic red paint used on his head fins. The black plastic has a nice gloss finish to it and sculpting is nice and sharp. 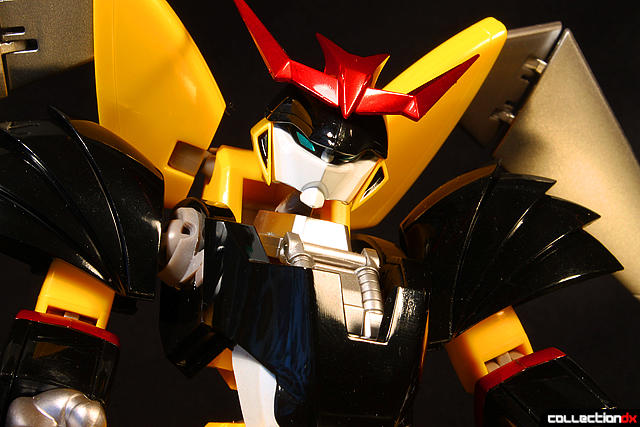 The set includes three pairs of optional hands apart from the standard fists. These allow for different posing choices and weapon-holding ability. 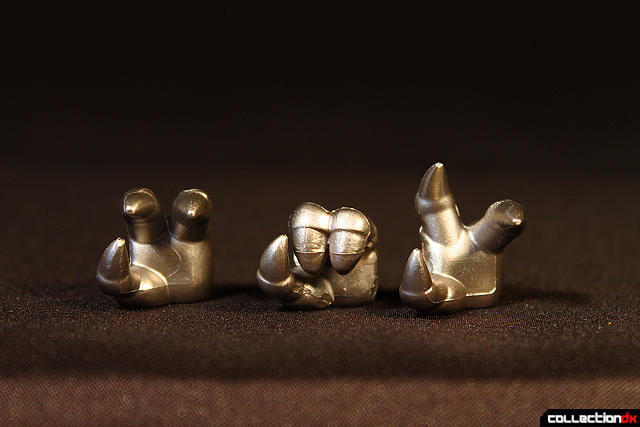 Swapping the standard fists with one of the optional hands allows Jyakomaru to hold onto his spear. 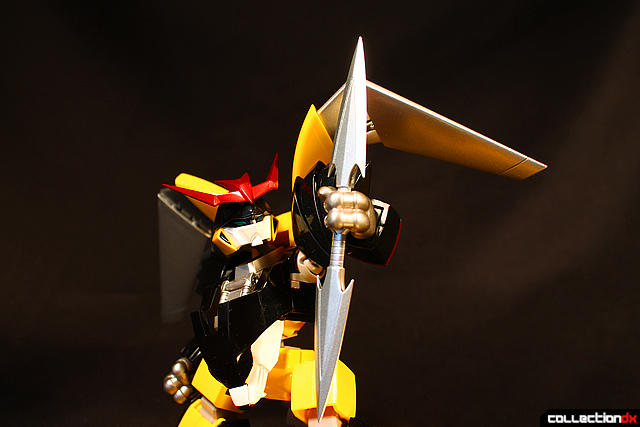 Another optional hand is included to hold this shuriken. 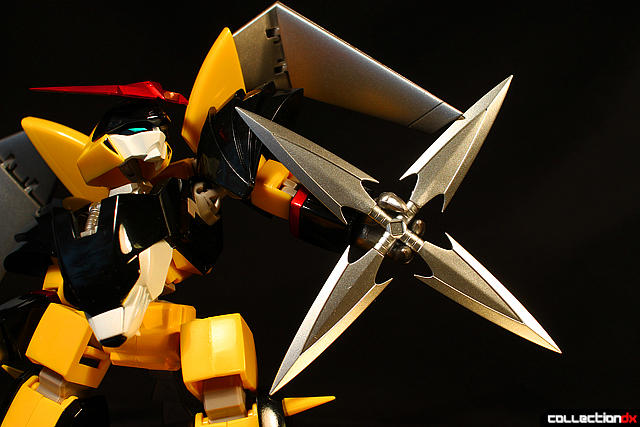 The set includes a shield in which the Tiger Sword can be stored. 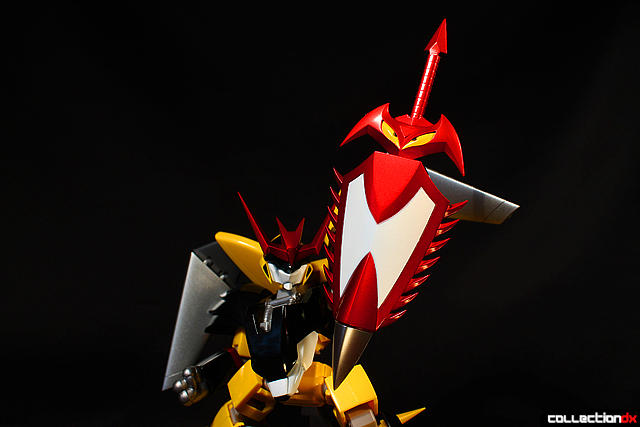 The sword is very similar in quality to what you would find in a Soul of Chogokin release. Same sharp sculpting and excellent paint app and color. 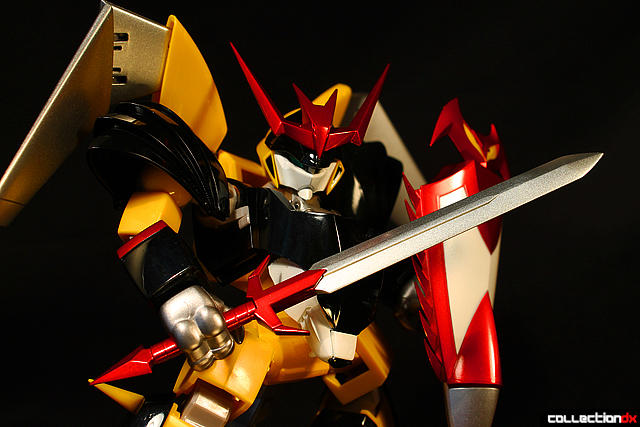 The articulation in his shoulders is generous enough to allow Jyakomaru to hold onto his sword firmy with both hands.

Removing a small panel from his forearm reveals an attachment point for the shield that frees up his hand. 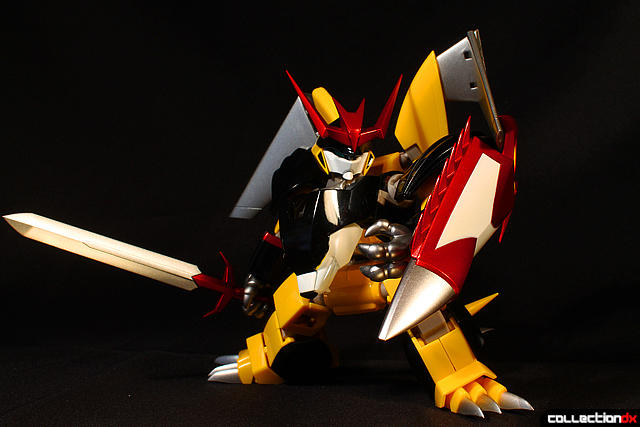 This set also allows you to recreate the Change Tiger mode which simply means he can change into a tiger. There are several steps needed to achieve Tiger mode, but it is pretty straight forward. A small section of the forearms need to be removed to place the tiger claws into. That step keeps it from being a perfect transformation. 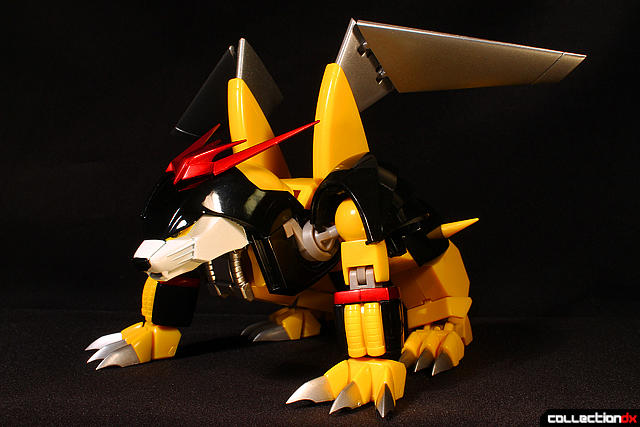 The Tiger Sword and shield can be placed on the back of Jyakomaru in Tiger Mode. 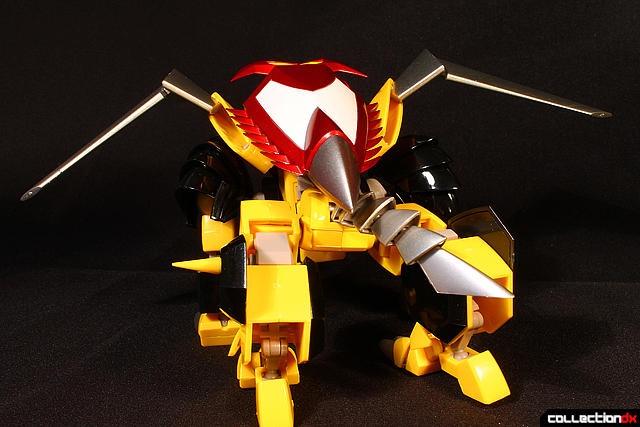 The articulation is the same as it is in robot mode since this is pretty much robot mode on all fours. The only added articulation lies in the legs after they are extended out to form the rear legs. The mouth can open to reveal a gun barrel that can be pivoted up and down. 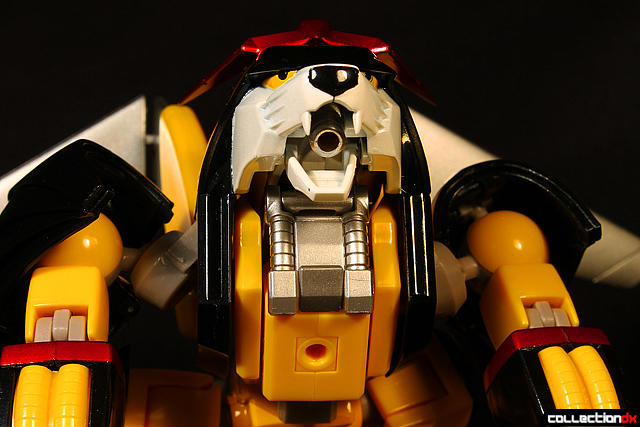 Overall, this was a nice little set. A bit on the expensive side, but justifiable seeing as the plastics are excellent, the sculpting sharp and the paint applications clean. Throughout the time I handled this figure I always felt like it would fare well with some diecast parts. The design lends itself to have a few diecast bits here and there, but overall nice regardless of what material it is constructed from. 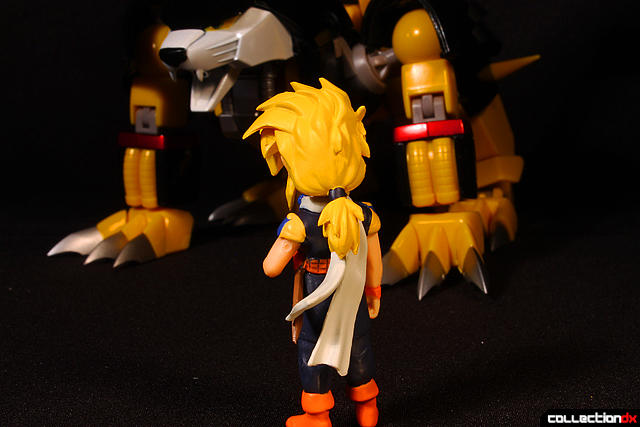 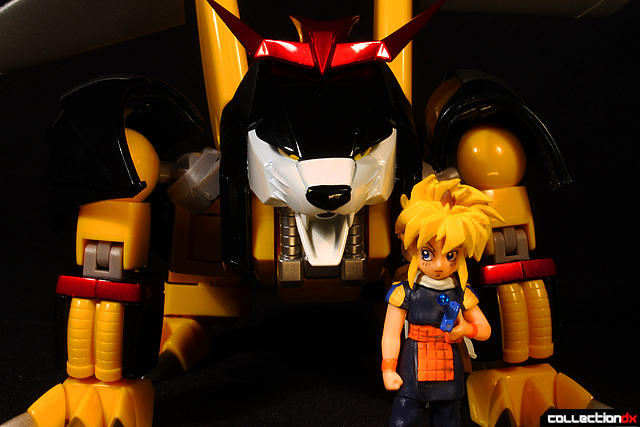 Review sample provided by Bluefin and available at BigBadToyStore.com

My thoughts exactly! Although I didnt mention it in the video, I saw the yellow and black design and thats the first thing that popped into my head!

I need to see Wataru one day, because I'm a fan of Granzort which was the spiritual sucessor to Wataru.