So it's the mid-90's and because of Macross Plus and Macross 7, Macross is popular again. You are a sleazy Korean bootleg toy maker. How do you make some scratch? That's right. You rip off Takatoku's classic rendition of the 1/55 scale VF-1J Valkyrie toy from the original Macross! 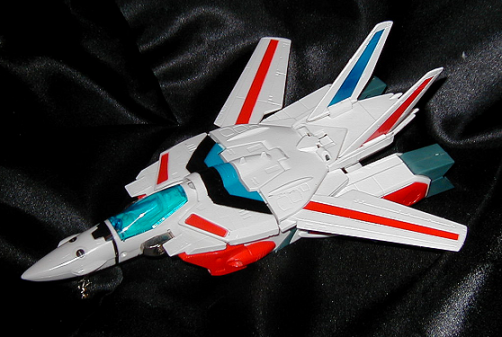 Like Takatoku and the companies that followed them, you want to get the most of your toy molds, so you crank out some color variations. The Hikaru style is obviously first. You always start with the protagonist's robot. And then Max and Miria in blue and red are the next place to go. And then... well, you're basically out of VF-1J color variations from the show unless you want to go brown, but no one ever buys the brown one. So what do you do? You make an olive green one. And what do you do after that? You make a hideous clown robot. 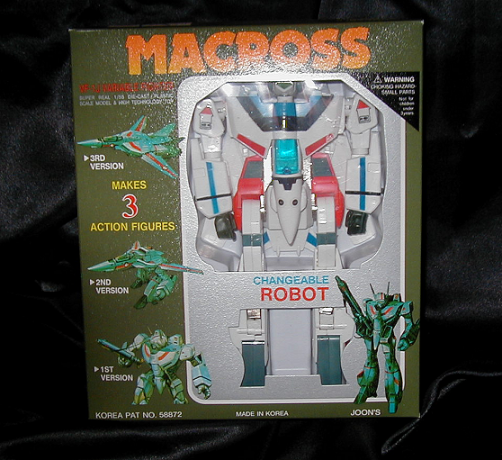 Honestly, this color scheme looks like someone ate a Bomb Pop and then threw it up all over this hapless robot. Some huge Macross nerds have observed that it sort of resembles the Angel Birds demonstration Valkyries from the first episode of Macross. I tell these people they watch too many cartoons. The inside and outside of the vertical stabilizers don't match and it looks like the robot just shoved both fists into some mud. 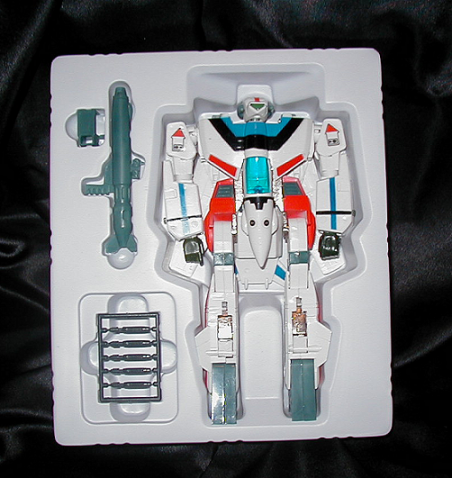 While it's kind of nice that this toy does include a small amount of metal (the wheels, the swing bars on the shoulders and hips), the legs are entirely plastic and that's a bummer. 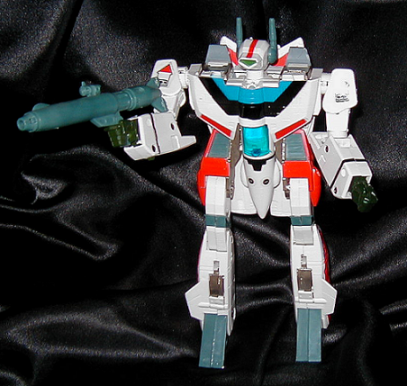 Also a bummer is the incredibly poor quality workmanship. None of the parts fit together well, the robot is pigeon-toed, and the head wobbles around on the spring in the neck. I actually had to open the thing and reassemble the head properly. While this is the same size as the original Takatoku toy, no, you can't swap parts between it and the original because the tolerances are all off and everything either shaped slightly wrong or ever so slightly bigger or smaller. 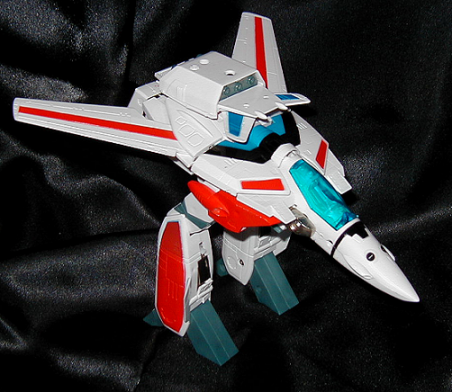 I think one of my favorite things about this toy is that the legs were clearly painted in blue and then they just painted right over it and you can clearly see the blue beneath it. Classy. 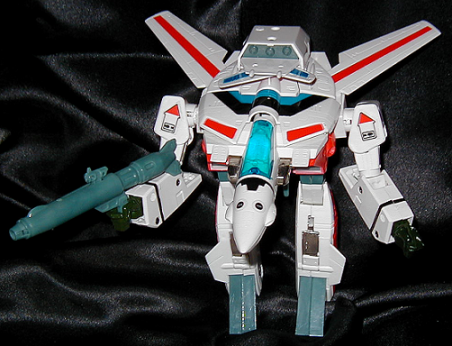 My mom got me this for Christmas when I was 15 or 16 from a local comic book shop. I don't know where the comic book shop got them, but they were selling them right alongside legitimate Bandai Macross 7 toys. A few months later all the Bandai ones were gone replaced by those sleazy Macross knock-offs. Ah, the world of illegitimate toy making. 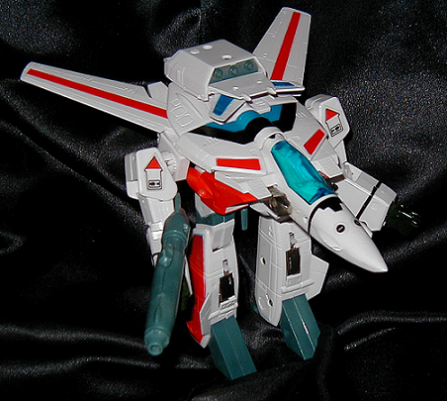 There is a happy ending to this story though! A customizer on the internet wanted this particular crappy variation of the Valkyrie for some project he was working on and the money I got selling this to him I used to buy a Bandai VF-1S Super Valkyrie 1990 reissue. It was missing the armor and had a shoulder break I was able to fix using my stash of spare Valkyrie parts. Essentially I traded this piece of crap for a way better Valkyrie toy! So remember kids, if you want a Valkyrie, get a different one.

You said that you've sold this bootleg to a customizer on Ebay (correct me if I'm wrong about Ebay) after you fixed the toy's shoulder hinges with spare parts. The stash of spare parts intrigues me the most.

May I ask what kind of spare parts were they? I mean were they from another cheap bootleg, some model kit, or a broken Jetfire toy?

PS: I almost forgot, I've noticed that the Joon's Valk comes with a gunpod w/ missles. Does the gunpod clone shoot missiles as good as the original I wonder?

No, I sold the bootleg to a customizer I knew from a forum. The bootleg was not broken. It was in as nice of condition as these cheapass things can be. I fixed the shoulder on the Bandai 1990 VF-1S after I bought it using the proceeds from selling the bootleg.

The bag of spare parts I amassed over the years of collecting 1/55 Valkyries and was a mix of Jetfires, Takatoku and Bandai Valkyries, and some bootlegs.

I think ended up just giving that bag of parts to Jerilock or someone at the Kimono My House closing party actually because I don't really do that anymore. Now I can afford to buy a nice Valkyrie instead of building one out of junker parts!

And I don't know how powerful the gunpod in this bootleg is or if it even fired at all because I never took the bullets off of the tree and tried it.

If you had read my review, you would have known that I mentioned that in the body of the review.

I have, admittedly, kooky taste, but I love this. With the red/blue paint and clear blue windscreen, it's the Abega Valkyrie.

I didn't even think of that. I wonder if Voltron is jealous?

Am I sick of Macross toys? A little bit. I am a little weirded out by all of the reviews of variant versions of the Valkyrie guy there have been on this site.

It's ok. I was merely answering the proposed Macross question.

I've always wanted the green one of these. Loved that color scheme, too bad he construction is weak.

I, for one, couldn't care less that there are a lot of Macross reviews as of late. I guess I'm a more bothered by the proportional rise in animosity on the site because of Macross being a lightning rod for that kind of thing!

Anyway, I think this sort of review is perfect. I'd seen these Joon's boots for ages and just never got around to picking one up. This is my first time hearing how crappy they really are...and I'm glad to hear about it! I had no idea.

Now, when it comes to a separate review for EVERY damn colorway/head sculpt in a specific line, that's a bit much...