The joker Squadron set is an Entertainment Earth exclusive set that includes 5 Stormtroopers and a Quarren Sith Lord. 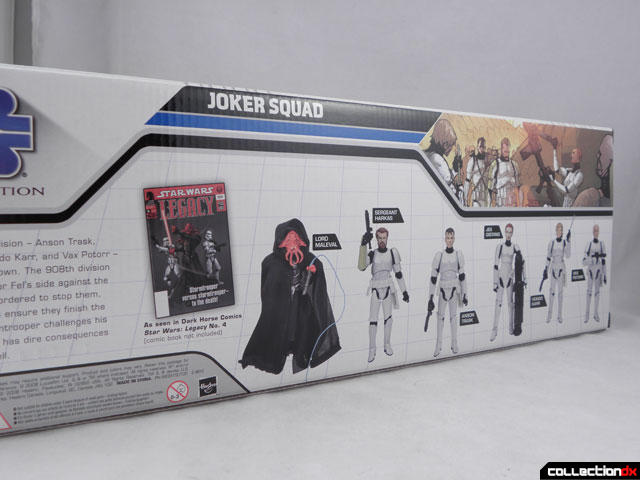 As you might know, I am a huge Star Wars nerd - it's not so uncommon amongst thirtysomethings. It's part of our DNA really. But there's nerd, and there's ÜBERNERD, and that line can be defined by one thing - Expanded Universe. 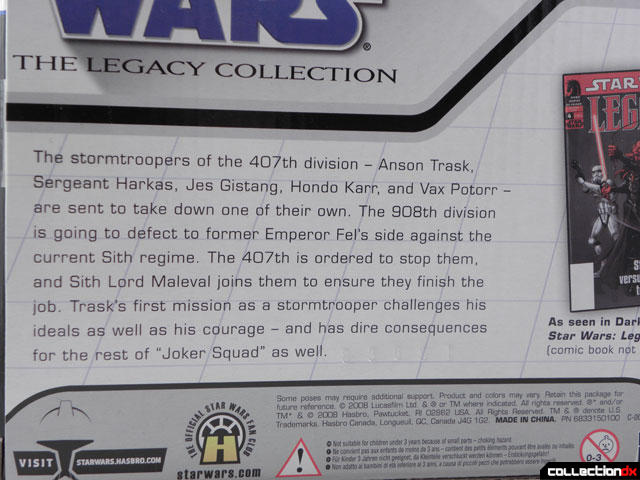 See, there is the official George Lucas universe - the six movies, the books, that sort of thing, direct from Lucas to you. Then there is this thing called the Expanded Universe. These are stories that take place before, after and between those movies, often times told in books, comics and video games. While most are approved as canon by Lucasfilm, some of it can really stretch its connection to the Star Wars Universe.

I'm all about the official Star Wars universe. I've seen all the movies, read the entire Marvel Comics run, played some games, and read some of the books that came out in the 90s (Timothy Zahn's were my favorite). But other than that, forget about it. Knights of the Old Republic? No idea. Han Solo's kids? Nope. I draw the line there.

The Joker Squad falls squarely into the ÜBERNERD Expanded Universe thing. While I'm sure these characters were in-demand by a subset of Star Wars fans, most of us have no idea who they are.

Included in this set are six figures that come from the Dark Horse comic series issues 16 and 17. If you want to read more about the background of the Joker Squad, check out the entry on Wookiepedia 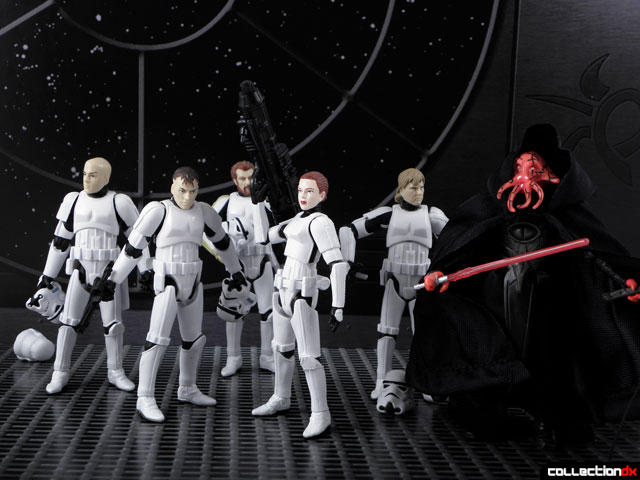 The included figures are:

Lord Maleval, a Quarren Sith Lord, is armed with a red lightsaber and a lightwhip. Loyal to Darth Krayt, this villain features loads of articulation and a cloth robe with wires inside so you may pose it any way you see fit. Articulation is good, but the whip is just string. Would have been better as wire. The robe with wires is a nice idea, but hard to make look good. 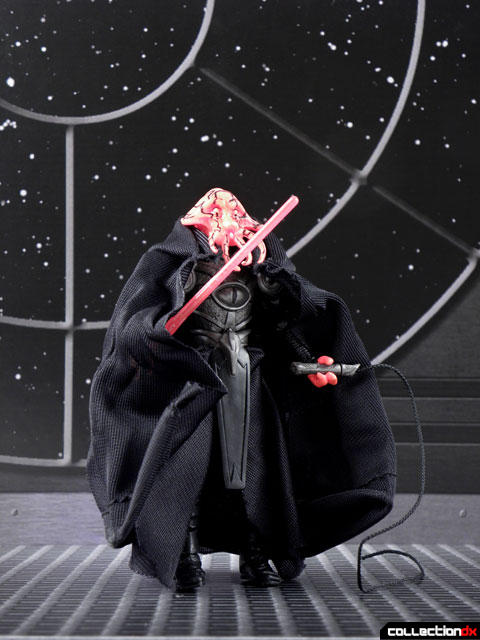 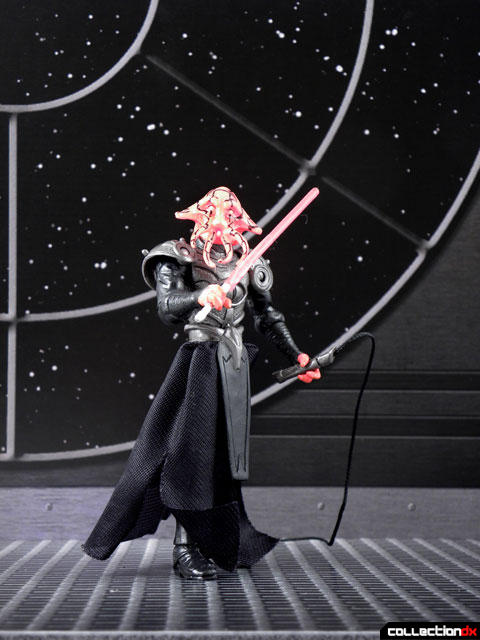 Sergeant Harkas, or "Hardcase" as his men call him, has uniquely decorated armor indicating his rank. This tough-as-nails trooper leads his men against the opposition in the name of the Emperor! His helmet is removable, as is all the other helmets. It doesn't fit quite right as you can see a bit of beard poking through the bottom. 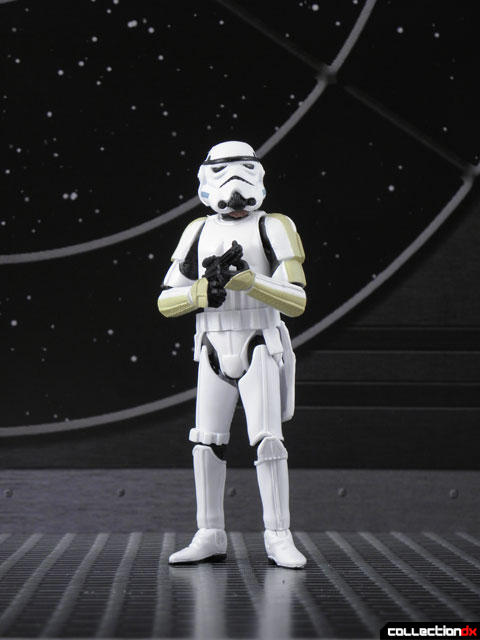 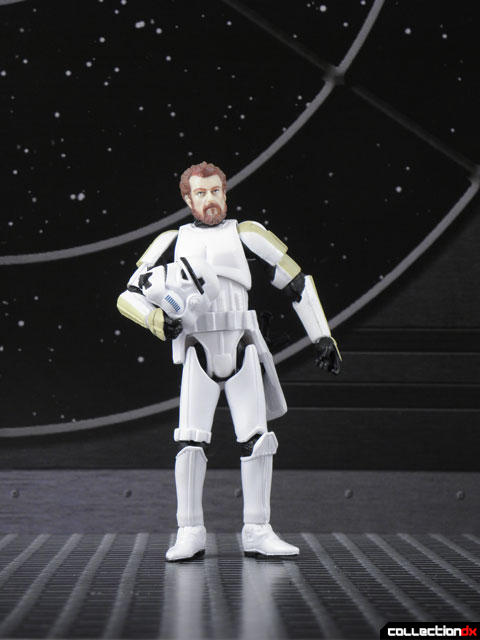 Anson Trask, fresh out of training, is the "noob" of the group. Having just been assigned to his 1st mission, this soldier is ready to fight alongside his squadmates against a worthy foe… a group of defectors! 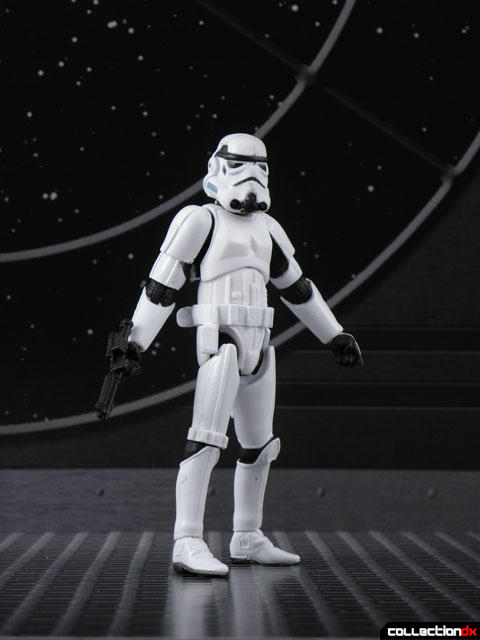 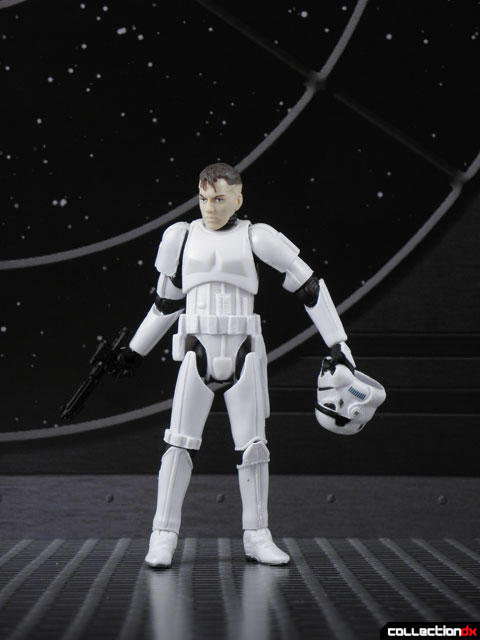 Jes Gistang handles the heavy weapons in Joker Squad. She's the 1st-ever female Stormtrooper in the Star Wars action figure line! With slicked-back red hair and a weapon nearly as big as she is, this amazing figure is all set to rain down the pain on her enemies! This figure is probably the main reason to buy this set. A Female Stormtrooper! The armor is specially molded to have a sleeker appearance. 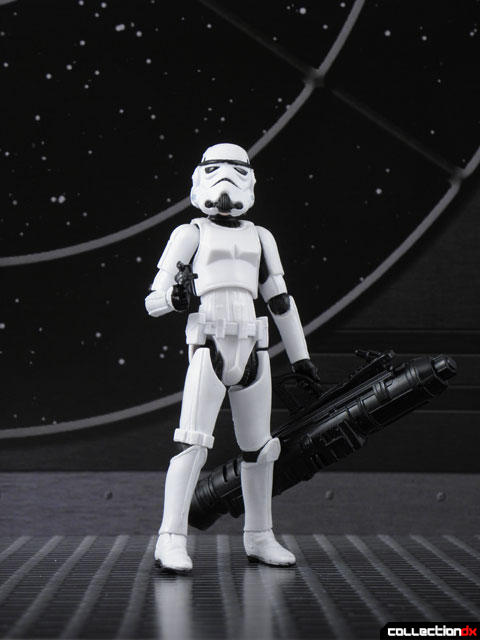 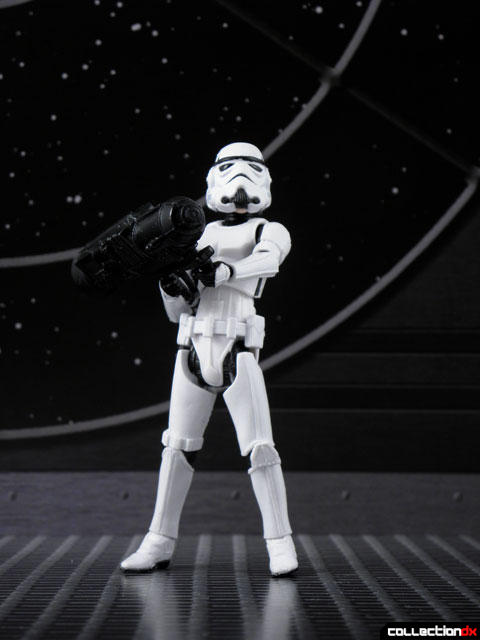 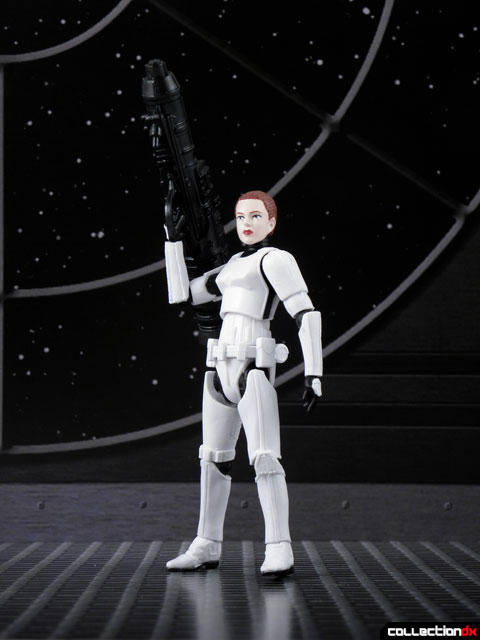 Hondo Karr, rumored to be an ex-Mandalorian, is as proficient with his blade as he is with a blaster. Surprising for a Stormtrooper, this anti-authoritarian loose cannon is a bit of a mystery. Can he be trusted with the future of the Empire? Not with a mullet like that. 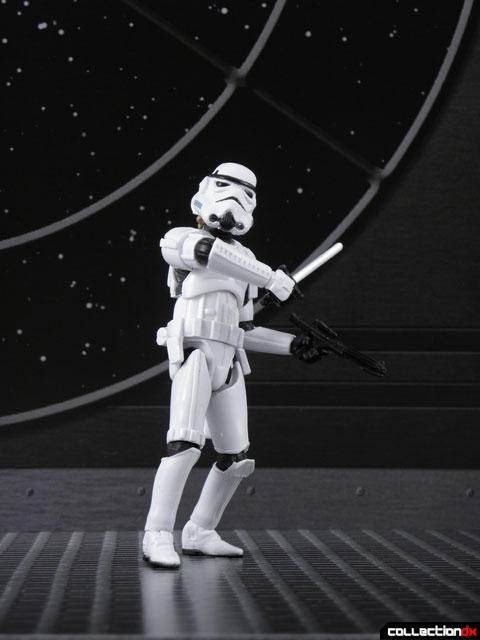 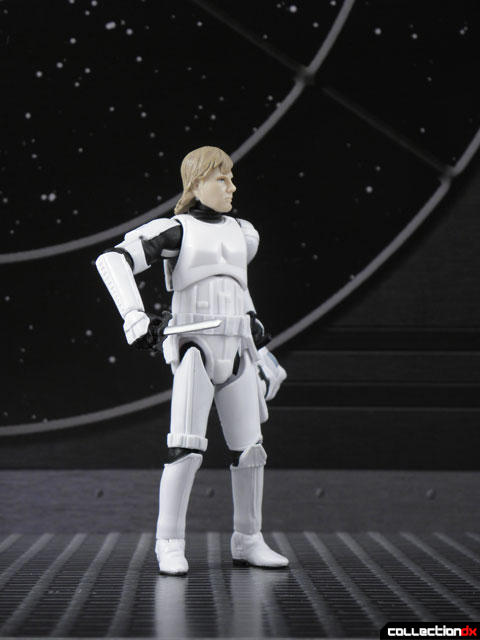 Vax Potorr was born on Coruscant, and through a life of hardship, he eventually found his way into Joker Squad. Ready to jump headfirst into battle, he has his eye on the enemy and his blaster aimed right at their heads! 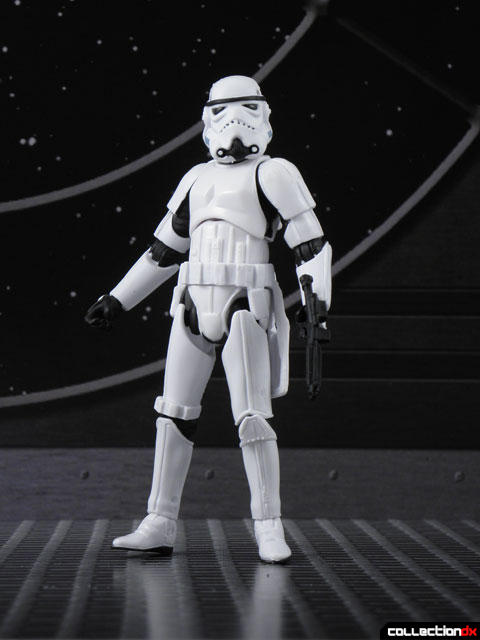 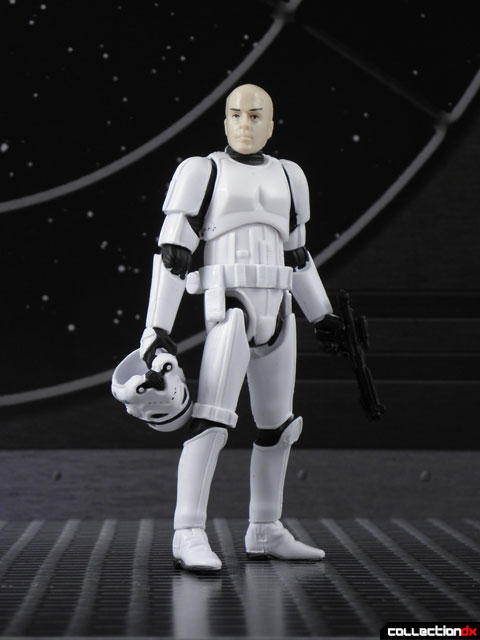 So if you are into the Expanded Universe, great, you will love this set. If not though, it's still a good buy. You figure it's $40 for six figures. That's $6.66 a figure. That's less than the price of a regular store bought figure. If you want an easy affordable way to bulk up your Stormtrooper army, this is the way to do it. 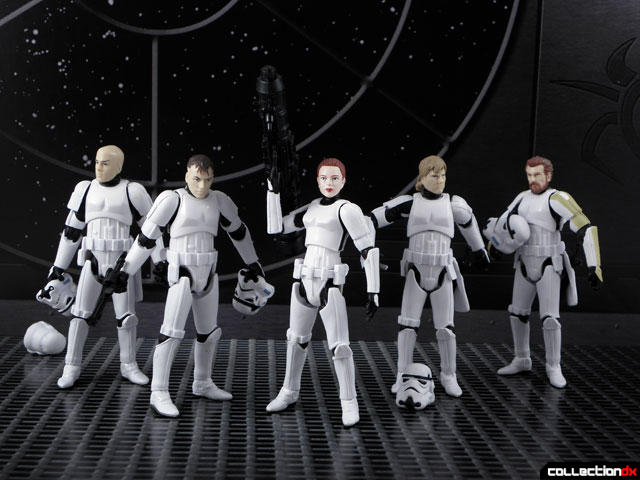 The Joker Squad is available NOW from Entertainment Earth

The background in these photos can be found at Action Figure Displays.

Love the Star Wars figure reviews.
The Sith looks cool without the robe.
Helmets that don't quite fit right seem to be a common enough problem with 'Trooper figures, across a few toy lines.

Uh...I thought, y'know, they were all supposed to be clones or something...?

Why're they all different?

Yeah, but I think somewhere along the line they lose the ability to make new clones, and they actually start drafting people...

Look it's the wannabee Stormtroopers who flunked out of high school and a Sith Lord with a bullwhip. Where is Barf & Pizza the Hut.

Joe Dirt Stormtrooper! I always wanted one of those!

This set should be relabeled "Lynyrd Skynyrd Stormtrooper Squad"!! ;)

But seriously, this is a set I'm going to pass on. The female trooper is nice, but not worth it to me as you have to buy the whole cast of "King Of The Hill" as well. Maybe if the troopers were more colorful (I love the black stormtrooper I have, but can't stand all the bland cheap armbands and crooked stripes they've been adding to troopers since 2005) - why not a nice bright purple and yellow trooper? If you're gonna make them something other than white then let's get CRAZY.

You know what would be awesome here on CDX? Since there's tons of sites that cover modern SW figures, and everyone is familiar with the vintage figures, why not do some reviews of THE BEST modern figures of the main characters from the films. I don't need a Lando in Adidas Jumpsuit review, but the best available in the classic outfit would be a great read, I know some of you guys collect these! I know I haven't paid too much attention since the last film came out and i'm sure others are looking to "upgrade" but not spend an afternoon scouring other sites' lists for "the best."

Also, what about some reviews of the vintage 70s Takara Star Wars diecasts? The ones i've seen are AWESOME and they're tough to come by in the US.

I agree. So they run out of clones but such a frivolous way to expand the Star Wars Universe and fill it with Stormtrooper wannabees, but these folks do nothing for me. A nice review anyway I know it takes work to bring a review to this site. A great Star Wars "Earth Entertainment Exclusive" is the Astromech Droid Sets. I picked these sets up a few yrs ago a real winner. Does anyone agree?

I disagree. I would like to see a review of Lando in his Adidas jumpsuit. Thanks in advance.

I worked as a freelancer at Hasbro I found out that some of the molds for the Star Wars figures heads were based upon actual Hasbro employees, those must be the corporate douches. Who I don't really know or care because I worked on the Playschool toy line. But what was cool was seeing Star Wars and Transformers Universe Toys now in the store over a year ago.

P.S. They use designers like whores a dime a dozen. Cool place to work bad employer who pays there full times sh*t. All the toy designs you see are made by Hasbro Far East as they call it. Concepts mostly from the Pawtucket Headquarters.

The official line regarding Stormtroopers and clones is that the majority of Stormtroopers are natural born recruits. Basically the Empire lost the ability to create clones and all that are left are a few remaining clones troopers and some clones created from new material, ie. not Jango. The Joker Squad in particular are from a later point in Star Wars history, some time well after Jedi iirc during the time when Han & Leia's kids are all grown up.

If I recall correctly (and I can't remember where I heard this) it wasn't so much the fact that they lost the ability to create clones but that they didn't need to any more. Once the Jedi were out of the picture it was cheaper and easier just to introduce conscription than to pay for a constant supply of new clones. The Empire was all about cutting corners when it came to cost.

The comics these guys are from (Star Wars: Legacy) take place around 140 years after Luke blew up the Death Star. At this point, the Stormtroopers are the not-so-bad guys, made up entirely of recruits, not clones, and even a few non-humans:

What sucks about these figures is that Hasbro didn't go the extra mile to resculpt the armor to make it look like it does in the comic (it's slightly different than the original trilogy armor). They could have at least re-done the heads and it would have been acceptable. FAIL.