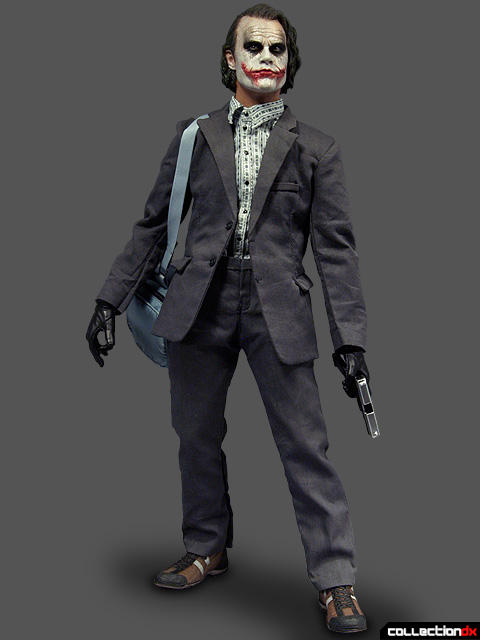 Hot Toys announced this new version of The Joker, Bank Robber Version, this past July, as one of their always highly anticipated Toys Fair exclusive figures. This reveal didn’t come as too much of a surprise to me as for the past few years Hot Toys’ choice of figures has been: one Marvel figure, one DC figure, and one movie figure not related to Marvel or DC. So, that leaves a small amount of choice for what figures to make when it’s fairly common knowledge now days that Hot Toys use their Toy Fairs Exclusives as a way to bring fans figures that normally won’t get a wide release. I use that term loosely because most Hot Toys suppliers tend to still sell these figures anyway, even if there isn’t a Toy Fair in the country, they will still have them on offer, like here in Australia, for example. 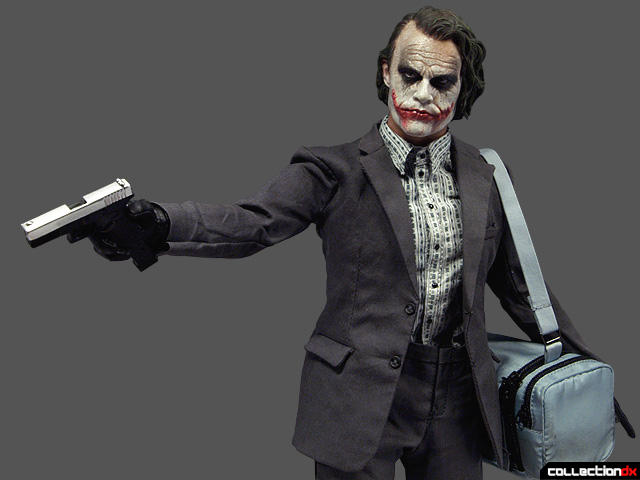 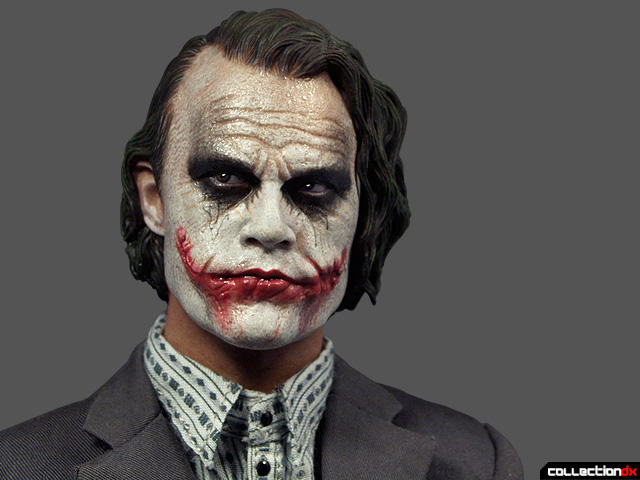 So in this particular case they have decided to produce an updated or 2.0 version of their Bank Robber version of The Joker. But, is it worth upgrading to as well as the extra money? 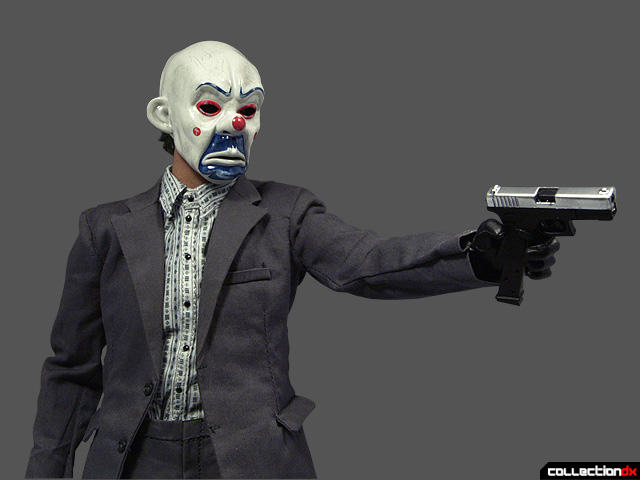 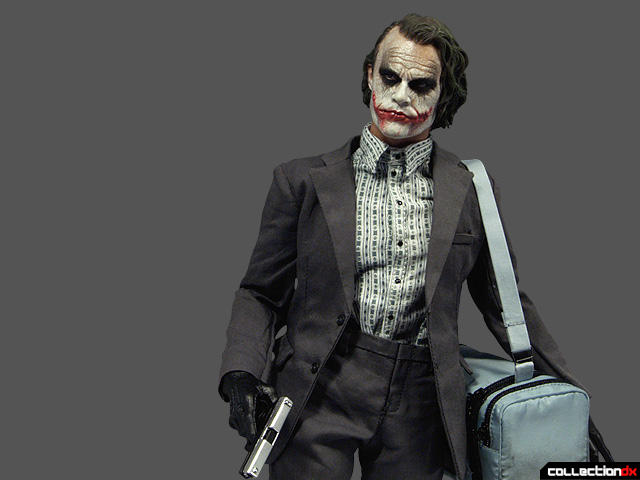 The head sculpt is very similar to the original release; it wouldn’t surprise me if they just went back and tweaked the original a bit. There are a lot of artists out there making custom 1/6 scale Joker heads, but the difference with Hot Toys’ latest offering is that this is definitely Heath Ledger; but what makes it even better is it’s definitely Heath Ledger as the Joker, not Heath Ledger with clown makeup on. The character really shines through and it’s that perfect combination of paint and sculpt that does it so well.

The main update is the hair line; the previous version had an awful wavy pattern where the separate hair piece met the head. I don’t have my original Bank Robber Joker anymore, but this was one of the main reasons I sold it a while back. It just bugged me way too much when having newer Hot Toys figures next to it when they had the improvement that this head has, which is that the hair line is sculpted up from the head and the separate hair disappears into that part, almost making it seamless.

It really adds to the realism of the head. What has also been improved on the head is the paint application. Hot Toys keep using more and more new techniques to make their heads look as real as ever, but they don’t overdo it either. It’s a very delicate balancing act, but JC Hong is a skilled master when it comes to paint and the finished product is one of the best as far as Jokers go. This was enough of a selling point for me as it’s an excellent update.

The second masked head is great too! Even though there was some complaint from fans that the mask was non-removable. I don’t feel it’s a problem, you are either going to have him with the mask on or not. I can understand some people want Joker to be able to hold the mask in his hand, but I really think that it’s a small trade off. As with the first head, its paint application is excellent. 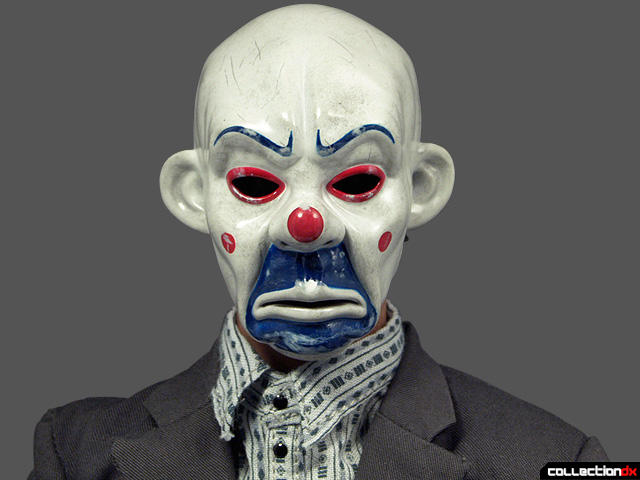 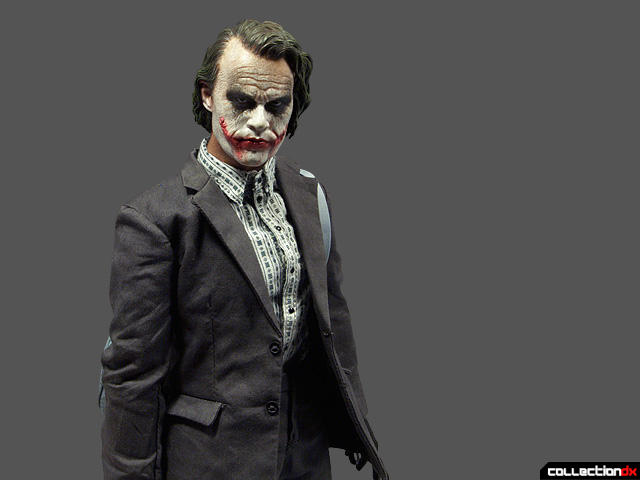 The suit is also greatly improved. I happened to have a spare version of the original suit lying around to compare with and the original just looks puffy and cheap next to this one. The lapels stand out the most to me, as they are now very sharp and crisp. Besides the much tighter tailoring, even things like buttons on the cuffs and shirt have been improved upon too. They are now much smaller and in scale, but aren’t functional in anyway. Two things I will complain about is that the “buttons” on the cuffs did come off while posing the figure during this photo shoot; I just used some fabric glue to put them back on, but if I hadn’t noticed, they might have been lost forever due to their small size - something to keep in mind when posing your figure. Also I feel the length of the pants could be a smidge longer too, I think they just sit up a little too high, I pulled them down a little to suit my liking, but that’s just my personal preference. 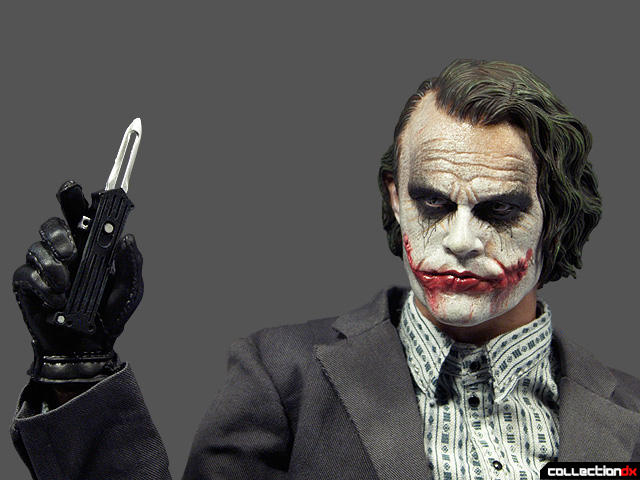 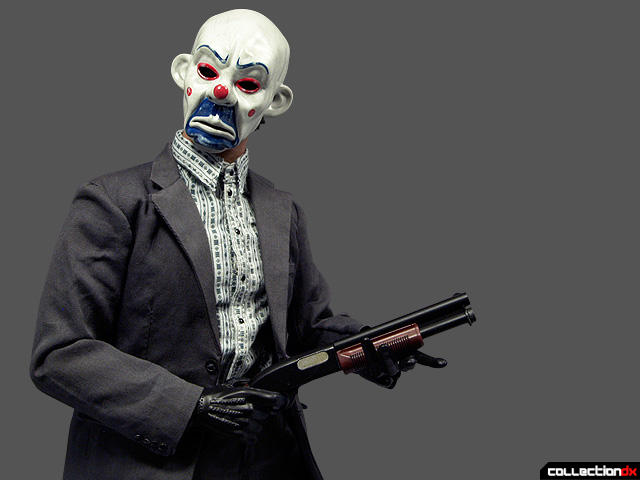 The body underneath is Hot Toys’ newer standard Truetype and features “over 30 points of articulation” according to the Hot Toys website. We haven’t gotten a release of this base body yet, but I imagine it’s only a matter of time before Hot Toys do, due to their popularity amongst fans. The body can be put into a number of simple and difficult poses depending on how extreme you want to get; the clothes don’t restrict the figure too much, if at all. I had no problems getting the poses I wanted and a simple tilt of the head or hands can make all the difference to your pose looking a killer. 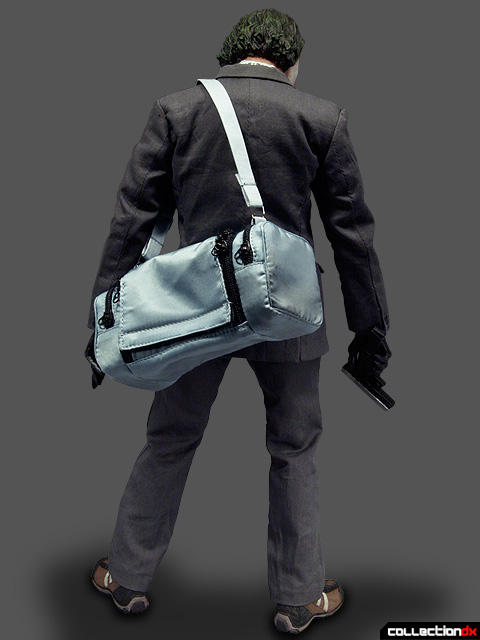 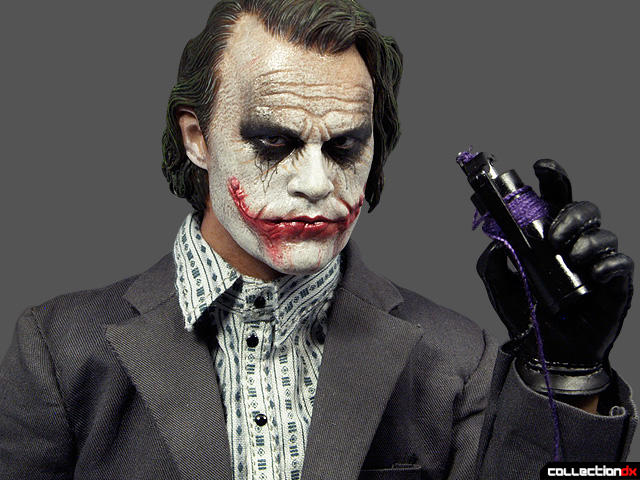 You get a good number of accessories with this version of Joker; a few more then the original release came with too. For example you get the smoke grenade with the purple string attached to it that never came with the first release. I feel satisfied with the amount and variety. You get a number of gloved hands, all of which seem to be the same that came with the most recent TDK version of Joker (DX11) but now in black. They are a softer material than normal, so I don’t feel like I’m going to break any wrist pegs when changing them over. The weapons are great too and all from the bank scene in the TDK, including numerous grenades and smoke grenades to go on the black rig that goes inside the duffle bag. Even the bag is much more detailed now with more zippers, better detailed strap and padding inside. 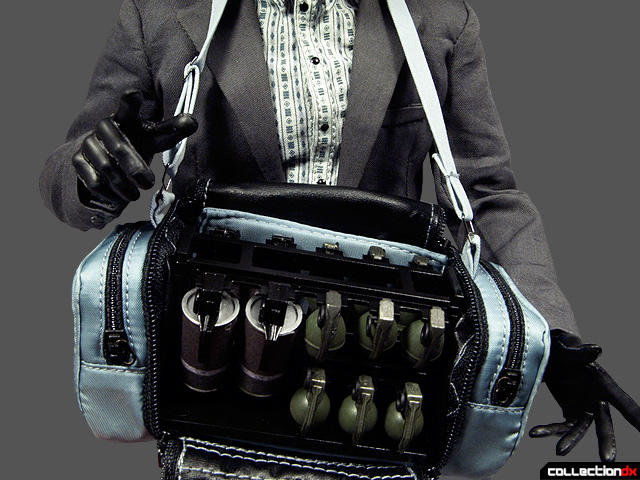 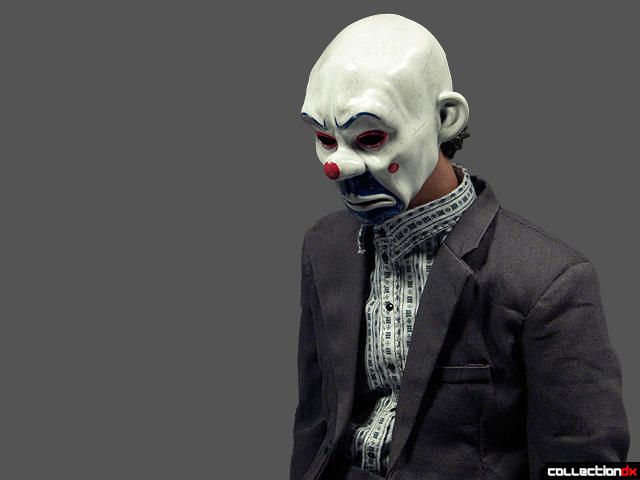 Other accessories included are: Joker’s knife, a pile of money which Joker has drawn on, a deck of cards and a wrist watch. I won’t be using these in my display but they are all good additions to the figure and help add variety to the poses you can put Joker in. 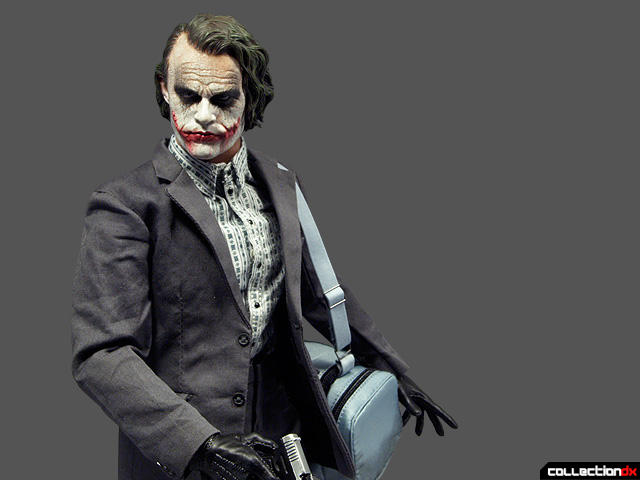 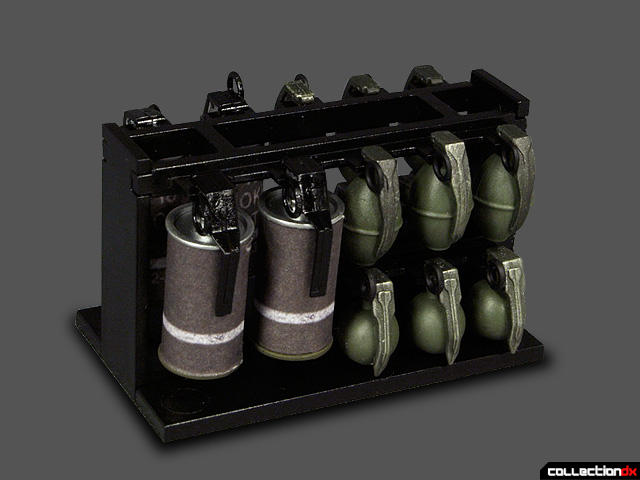 I normally don’t care about the box the figure comes in, but this one is pretty sweet. The outside looks like the clown mask and the slip underneath that has the Joker’s face on it, with eye holes cut out in the mask layer so you can see the eyes through the mask. I was pretty impressed by that design choice, it’s cool! 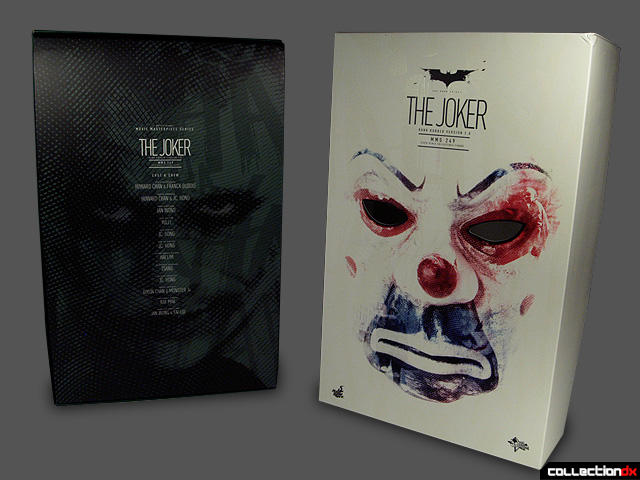 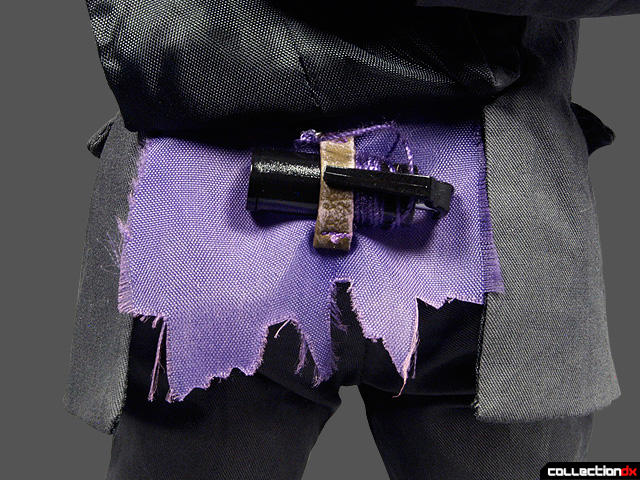 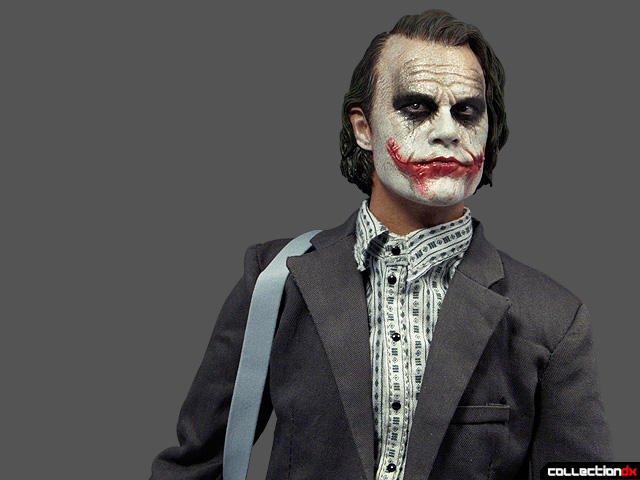 Included is one hell of an epic display base and back drop! It’s quite large and will take up a lot of space in your display cabinet or display shelf. What is missing is at least including a small black base like the original version came with. I just happen to be lucky to have a spare one and I’ll be using that for my Joker figure. Although impressive in size, I don’t know anyone who has space for the thing and I won’t be using it as I find it too much of a waste and a gimmick for me. 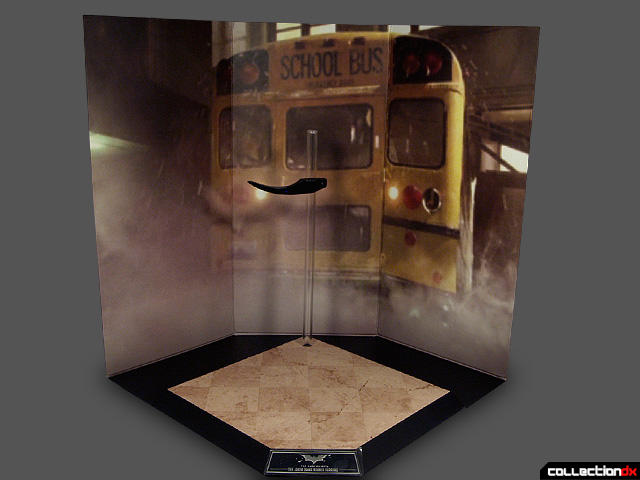 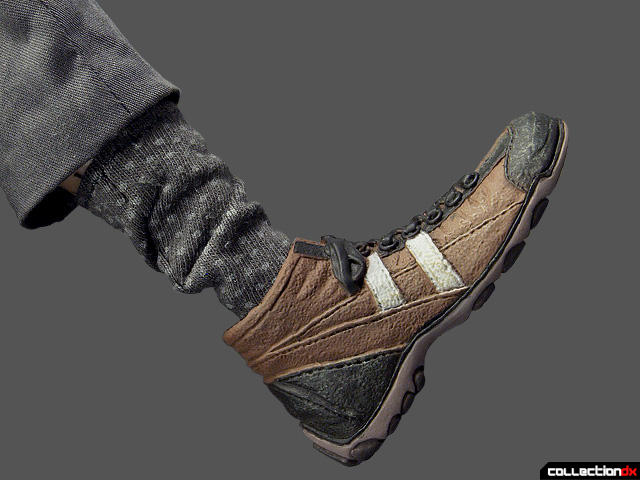 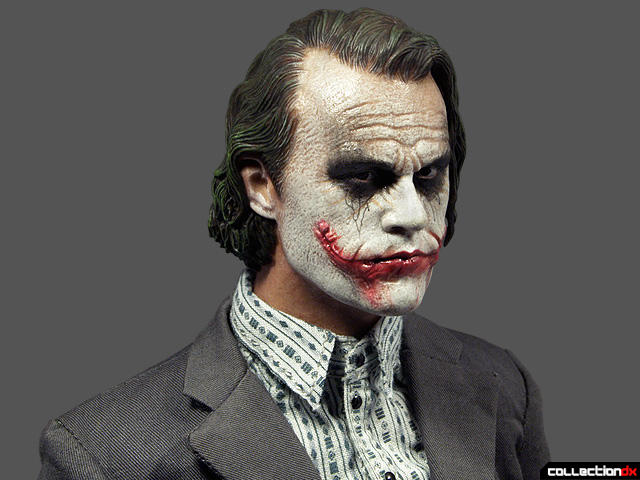 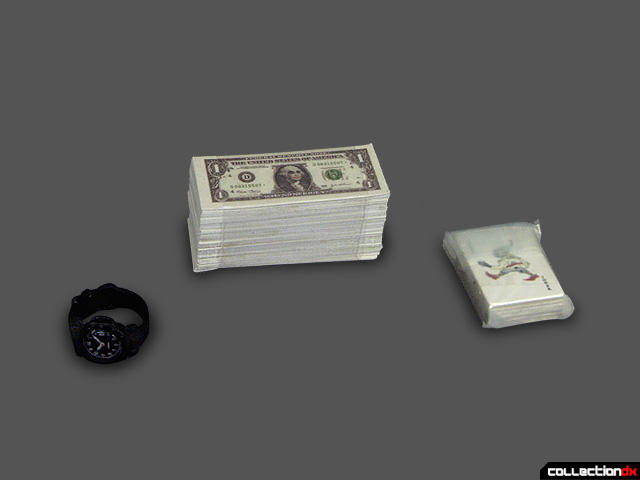 I feel quite satisfied with this updated version of the Bank Robber Joker, having owned the original release for some time, with it being one of my favourite figures, one I was sad to let go of. I am more than happy that I now have a better version of the figure that I liked so much. In my eyes it surpasses the original in every way and is worthy of its 2.0 title. I’ve heard some Hot Toys fans are happy with the original and don’t want to update, that’s fine, but I think they are missing out. It’s worth the money and if you are able, it’s time to upgrade. This is another shining example of how far Hot Toys have come and how much they have improved their figures over the years. 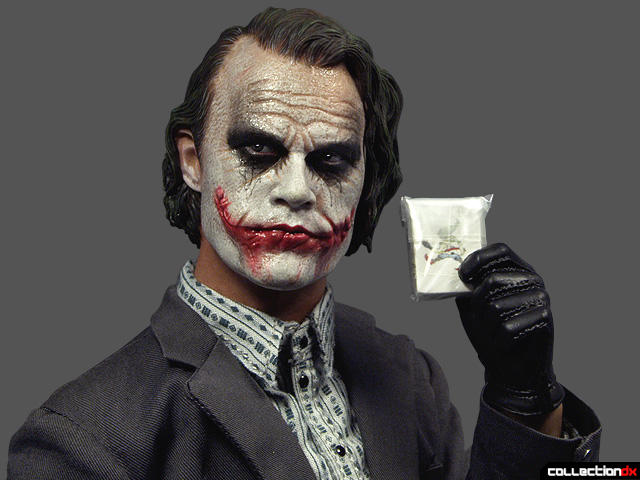 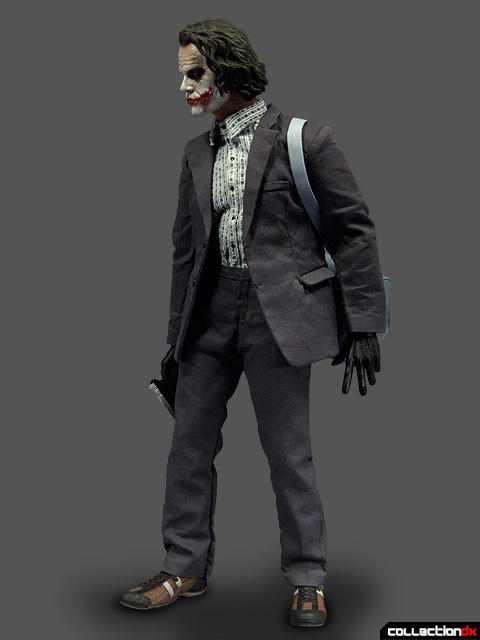 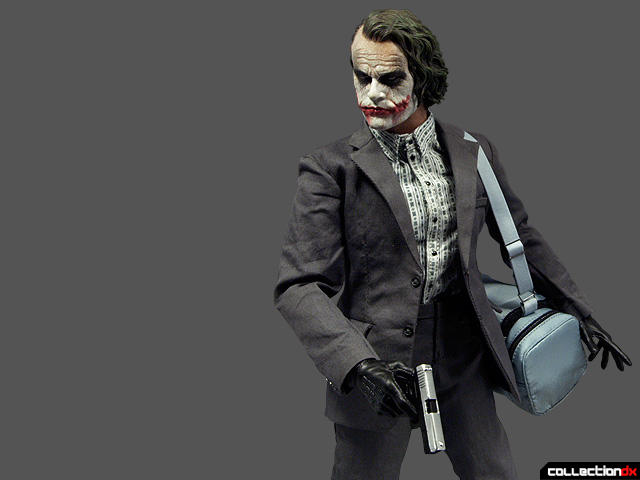 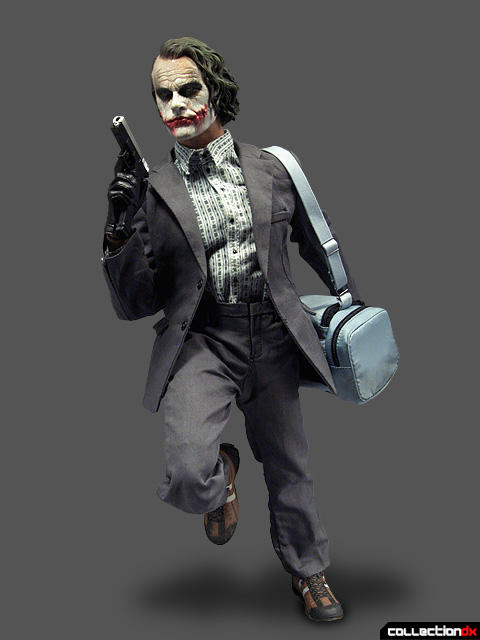