Jesse Quick as the Flash

Review. After all of that Bishoujo statue goodness, I felt it was time to compare and contrast the newest releases from DC two primary “girl statue” lines. Jesse Quick represents the latest 2011 release for the Ame Comi line along with the Duela Dent “Joker” statue.
Here’s the four color window box. 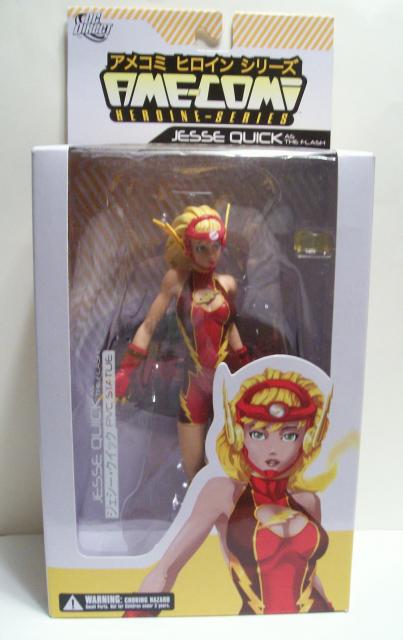 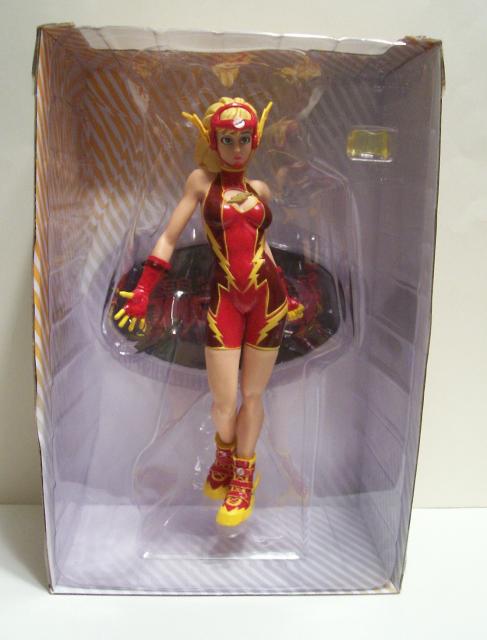 The Jesse Quick statue is about 9 inches tall and comes with no accessories. There is a yellow, removable visor and a base. As with all of the statues released by big family-friendly corporations there is no nudity. 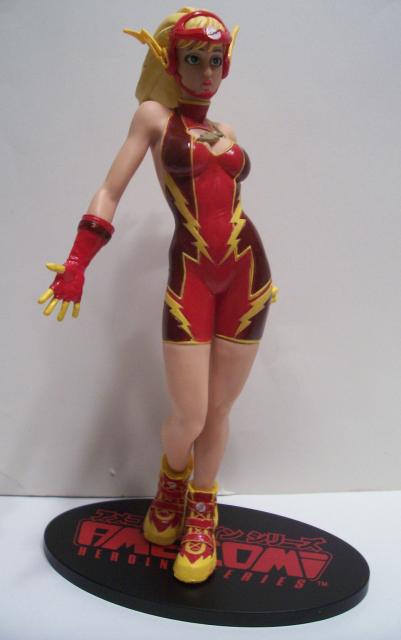 There is no posability-but the head turns from left to right-but I wonder if this is more of a quality control issue rather than a feature of the statue. Here is the face plus abdomen minus the visor. The eyes are striking. 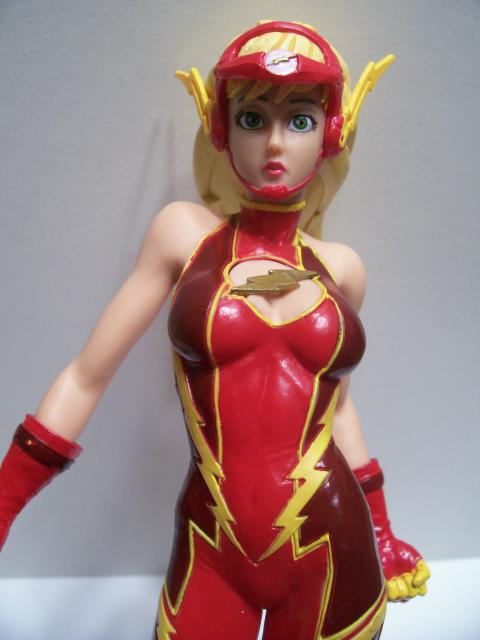 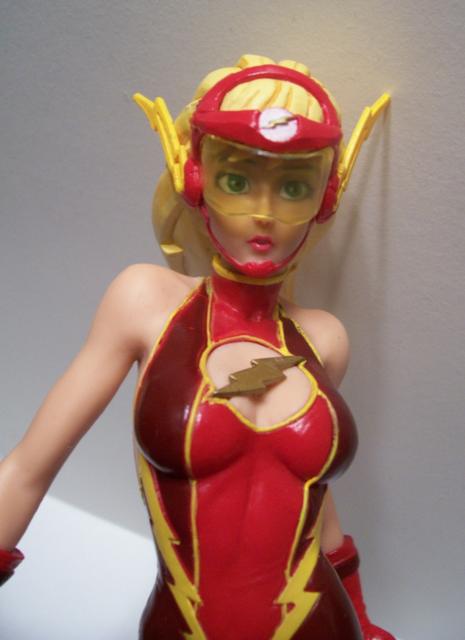 So, by all rights-this should be a terrific statue. You’ve got a simple, streamlined character with a bright red costume with some great motifs to take advantage of, and indeed Jesse has an attractive presentation. 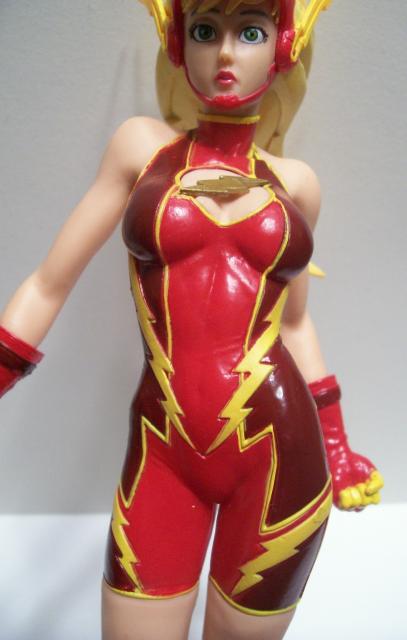 But I have a number of complaints. First, was quality control. When I received mine, one of the lightning bolts that fit on either side of her head had fallen off and was rattling around inside the box. Shortly after I had repaired it with a little glue (it was poorly adhered), than the OTHER one fell off! 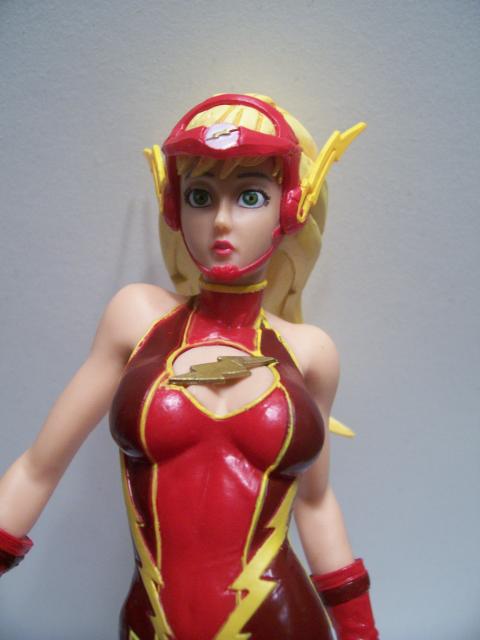 Paint on the head and indeed, all over the statue looks just kinda messy with poorly done lines, color bleeding and frankly, just overall quality was substandard. Especially compared to the high-level of detail you find on the substantially less expensive Bishoujo statues. 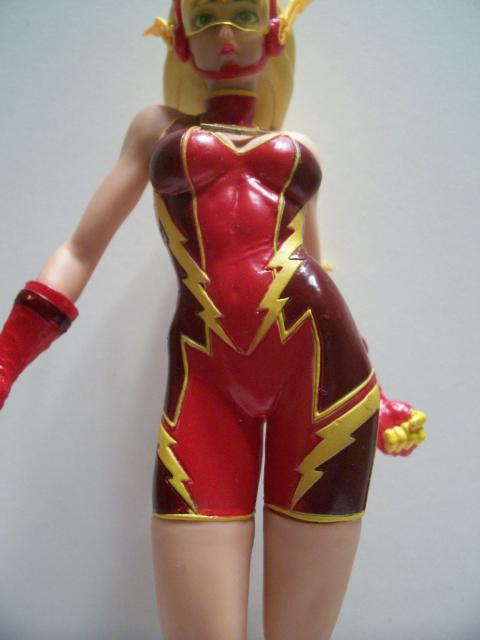 Paint lines along her costume all just look kind of sloppy, although she’s certainly got the benefit of having an attractive sculpt with a nice clean figure and attractive abdominals. 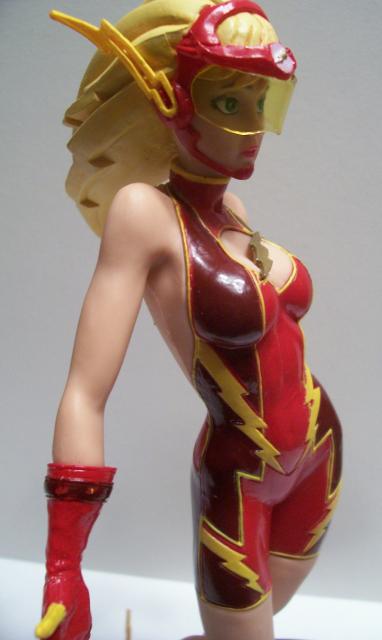 The visor is kind of a milky clear plastic and doesn’t do much for me…and doesn’t attach to the headgear very cleanly.

The sculpt and pose are nice, nonetheless.. Here is the left… 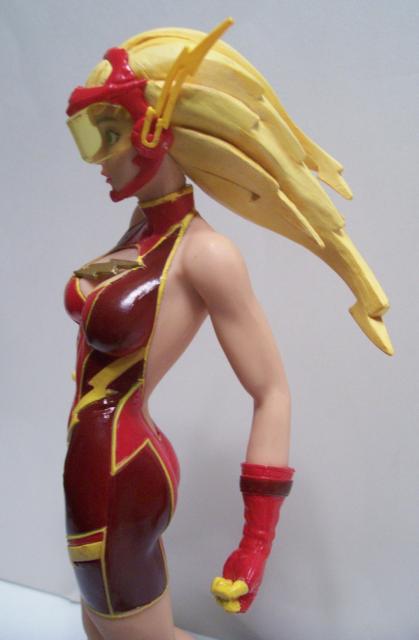 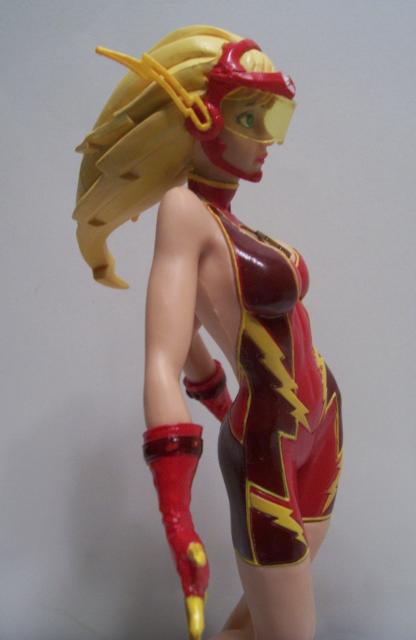 Looking down at the hair we see the ongoing lightning bolt motif that she carries…but again the colors between the headset (red) and hair (yellow) seem to be bleeding between one another. 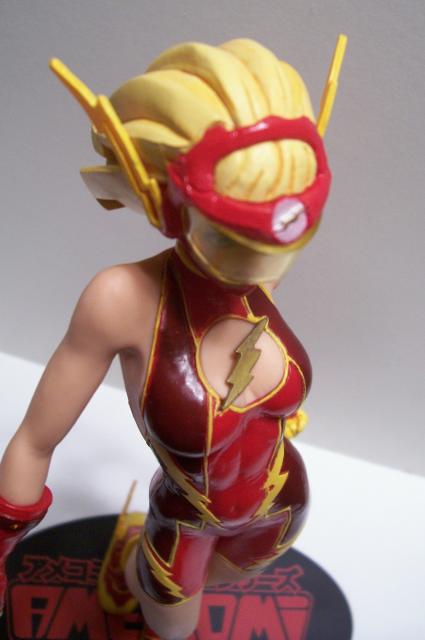 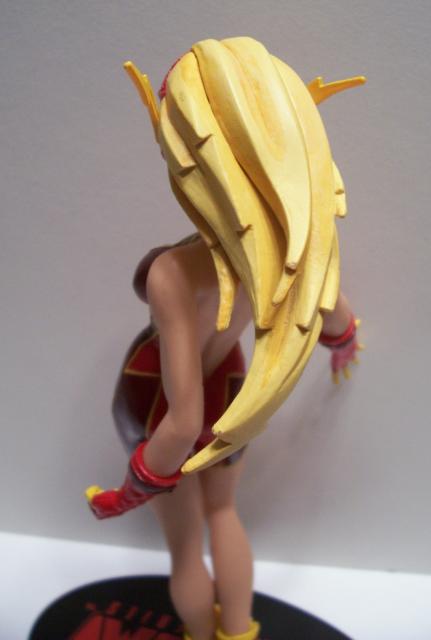 From the rear, she looks better. But again, we have more problems with red paint bleeding onto the contact between the costume and her lower back. 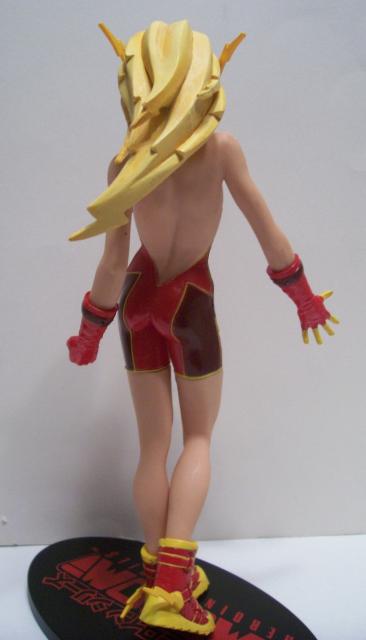 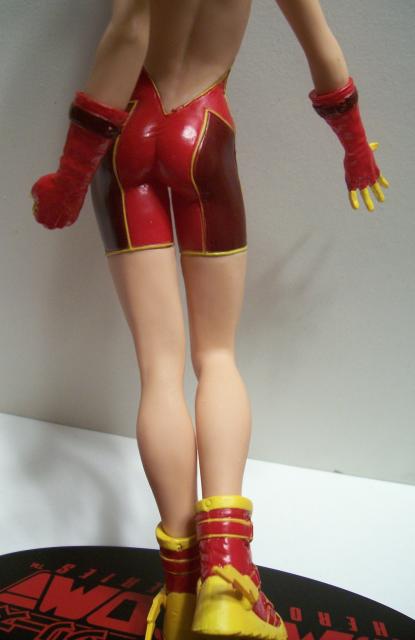 Ass is a great sculpt! Round and pleasant. 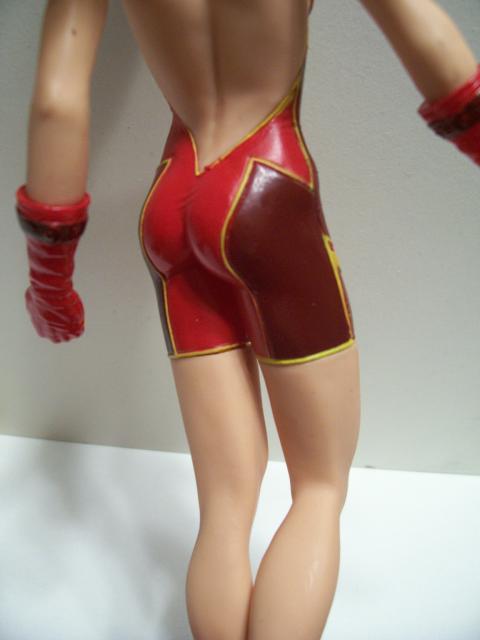 But I dunno something seems off with the colors. Paint on her hands is okay..but again the colors look off. 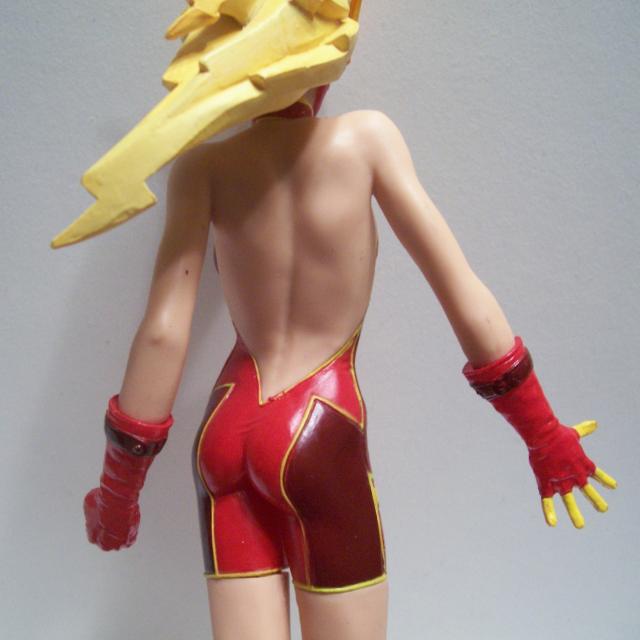 Paint between the red and yellow on her sneakers also has the “bleed” problem that I see all over the rest of her costume. 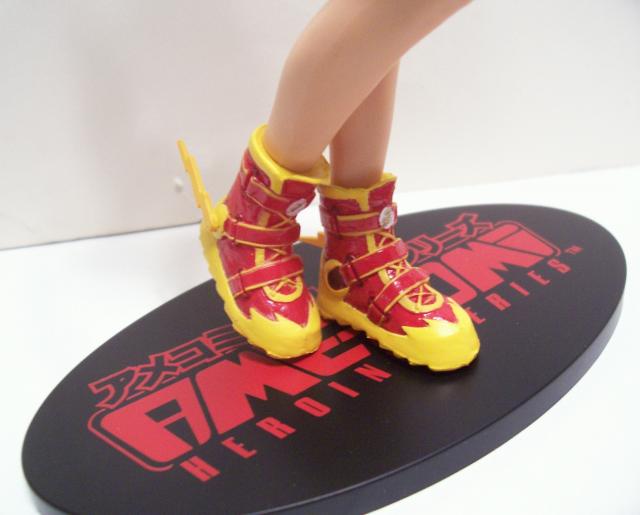 Articulation between the feet and the base looks fine and Jesse is posed so that she can stand on her own feet without the base, should that become necessary. 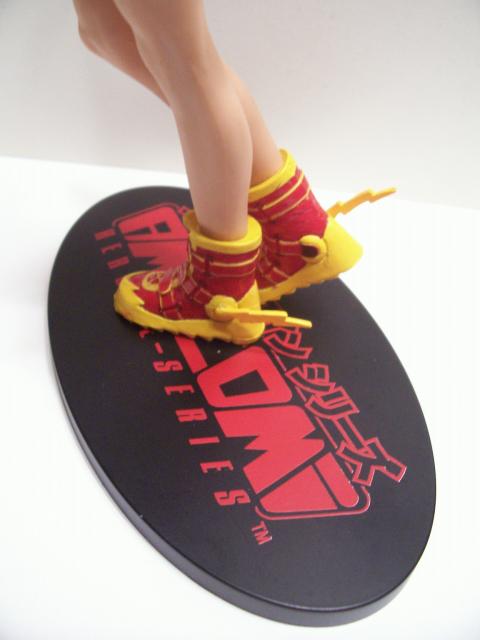 Overview. So, there only 4 more Ame Comi statues remaining this year (Mera and Raven in May and then Big Barda and Wonder Woman in the Fall) but given the appalling details on this statue-I really wonder if DC Direct has already given up on this line in favor of the MUCH higher quality (and less expensive= 59.99) Bishoujo statues.

I could be wrong of course. This one individual statue could have been the exception to the rule. But the combination of poor quality control and awful paint problems were flagrantly obvious and shouldn’t be an issue on a 70.00 statue. I don't mean to sound too harsh..I like this character and this should have been an "easy please" for me. Its not a terrible statue-but its not a perfect one either.
Kotobukiya’s Bishoujo line displays an impressive level of quality control and artistic presentation. If the Ame comi statues want to be competitive they’ll have to be better than this..