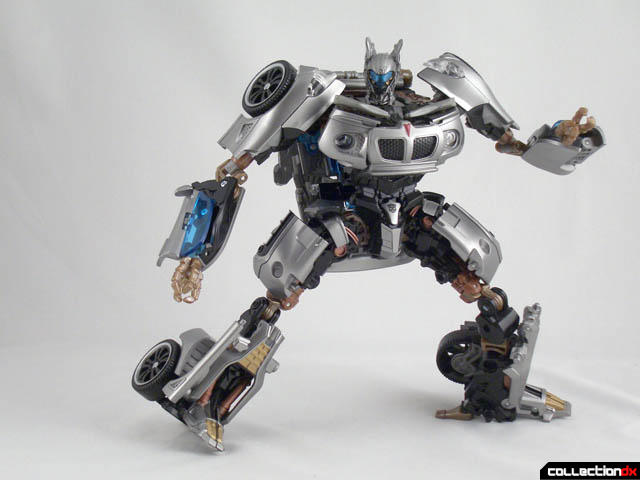 Jazz was pretty slick looking in the first Transformers film, but then they went and killed him, but that hasn't stopped Hasbro from adding him to the Human Alliance lineup. I for one am glad. 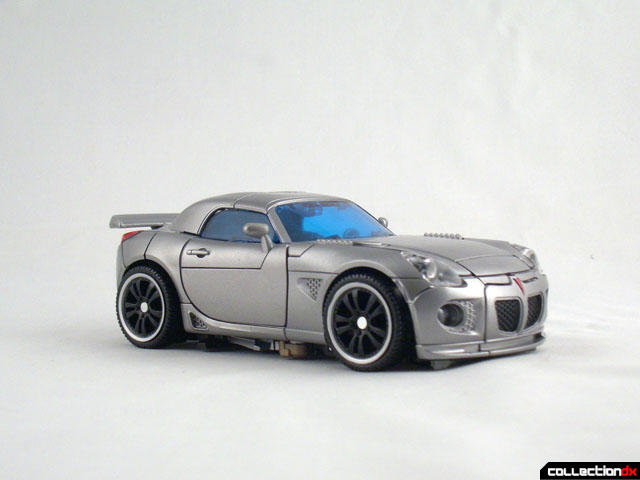 I have been extraordinarily happy with the Human Alliance line so far and have pretty much kept up with each release as they have come out. When I found Jazz on shelves early in his release cycle I was so excited to get him I didn't wait to take pics of the box before opening it, sorry. It was the same window scene as previous releases except it was just labeled Transformers (No Revenge of the Fallen or any other "line") in the orange style packaging of the 2010 season. 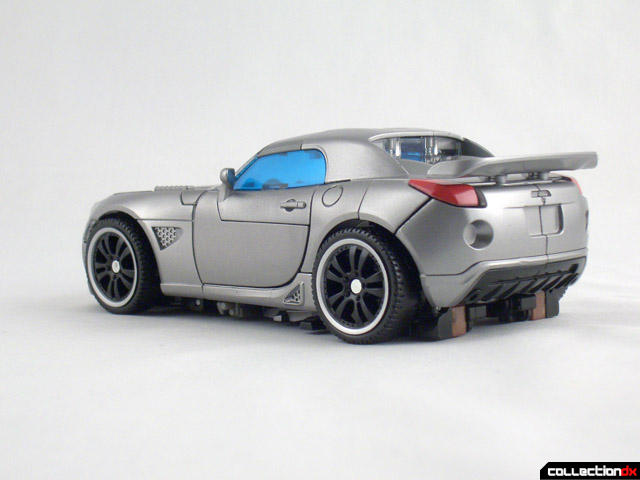 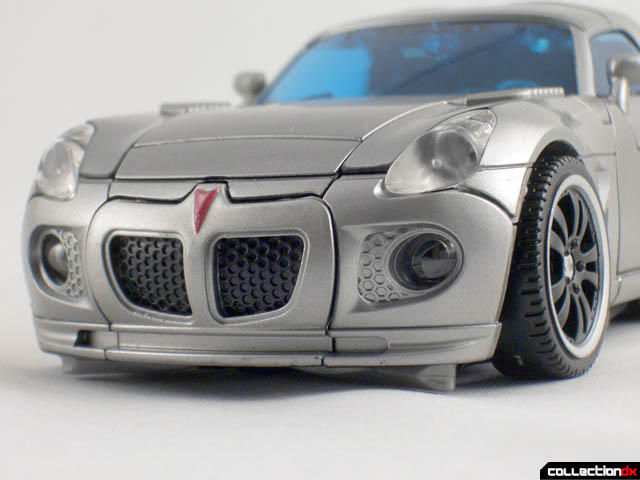 Jazz comes out of the package in car mode, and as you can see the panel seams are pretty obvious. Sometimes Hasbro is real good about seams and sometimes they just can't seem to make them fit better. On Jazz they really stand out, but the trade off is a highly posable robot mode that looks very much like it's onscreen counterpart. 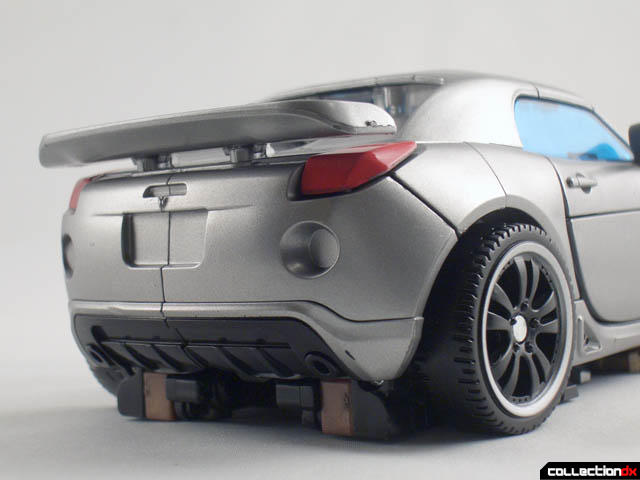 Other than the obvious visible seams, I have zero complaints about car mode. It's a pretty dead on replica of the concept hard-shell Pontiac Solstice seen in the first Transformers film. The doors open to accommodate two Human Alliance figures and the wheels spin. What else could we ask of a car toy? Vroom vroom. 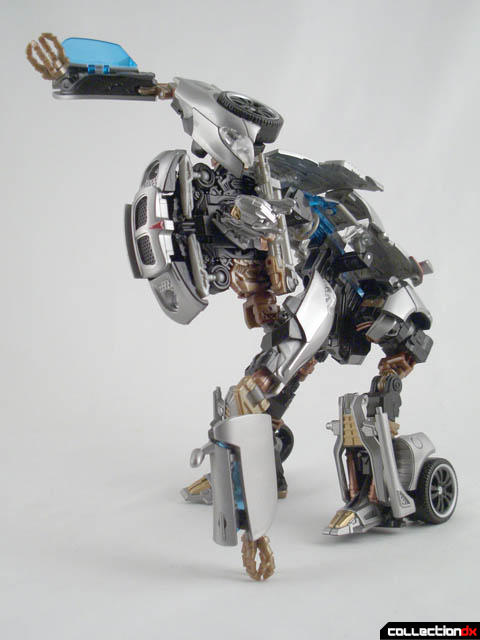 Transformation is listed as a level 4 and is pretty easy once you've done it a few times, though I did find the legs on him to be a bit of an origami puzzle the first few times putting him back to car mode. 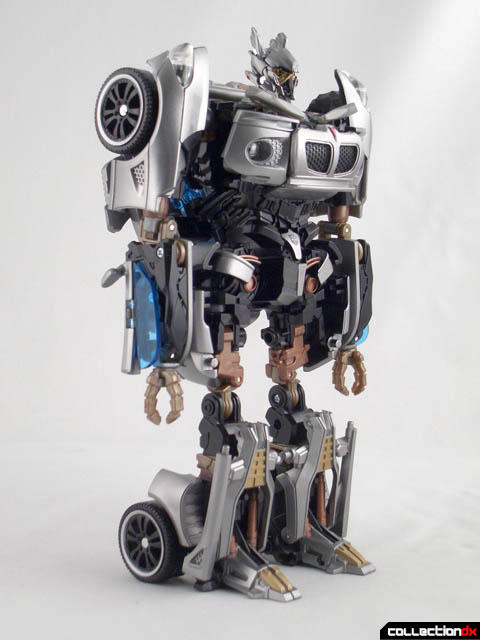 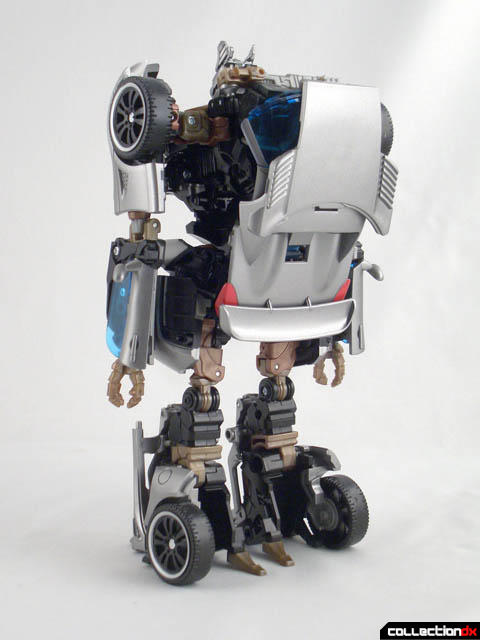 Robot Mode is very nice and hands down the best interpretation of the character to date. Joints are plentiful and everywhere you would want one: hip, waist, shoulder, elbows, knees, and the head turns. 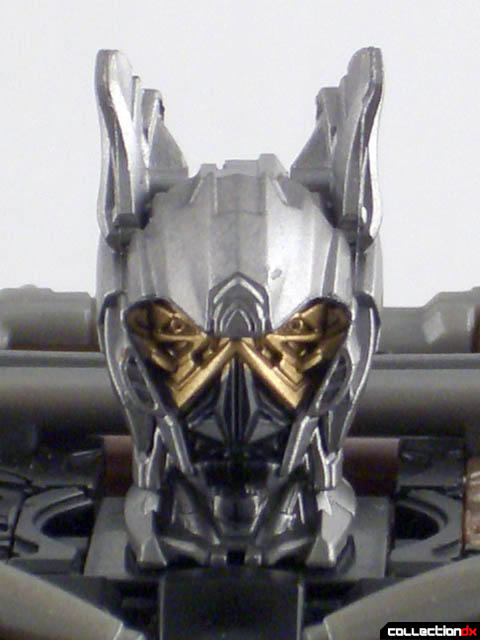 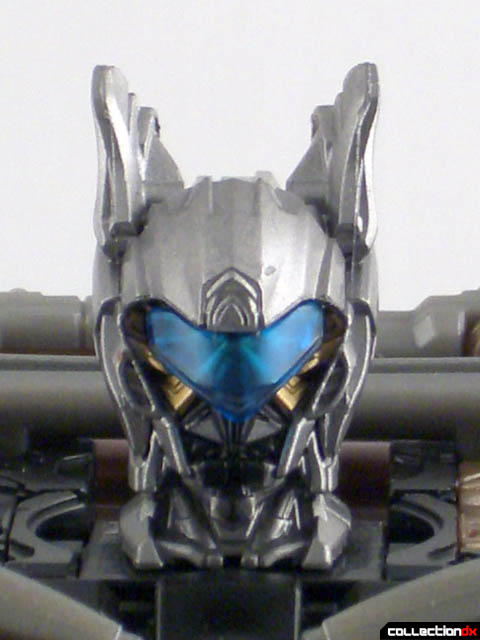 Speaking of the head, Jazz can store his battle visor when not in combat for a more relaxed and casual look. 'Cause robots need time to chill too, ya’ know. 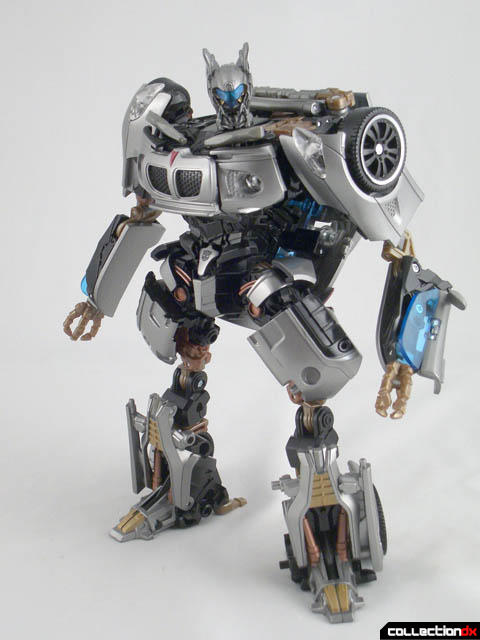 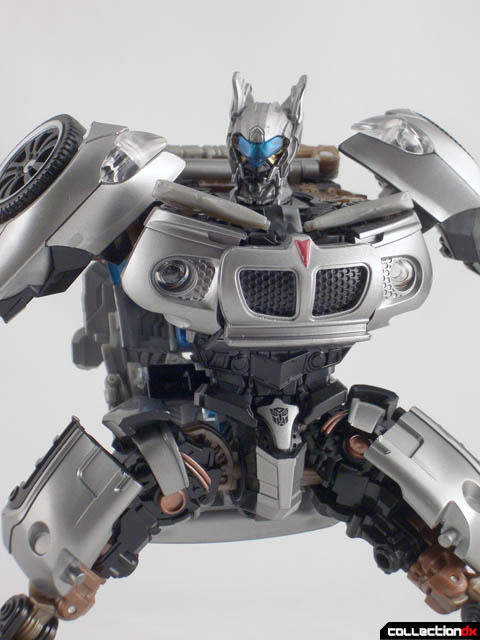 Sharp eyed viewers of the film may have noticed Jazz had a fairly unique weapon that was a combination shield and blaster. Instead of trying to force that gimmick into a very lean looking robot, Hasbro included it in the form of a transforming motorcycle. Instead of transforming into a robot it turns into a blaster with a spring loaded missile launcher that the included Captain Lennox figure can ride. Neat play feature as a 10 year old kid, odd design choice as an adult. 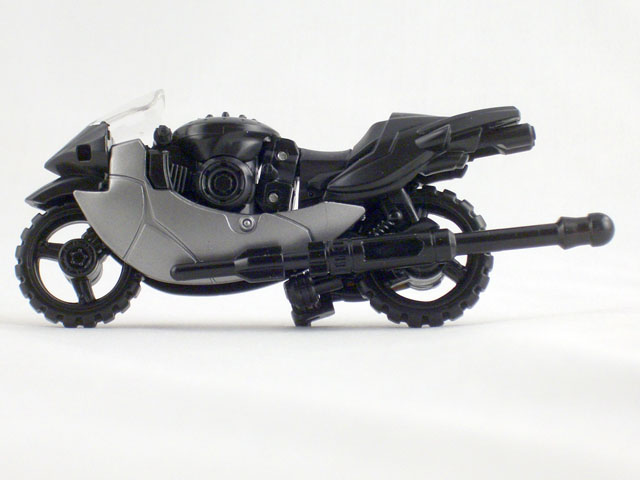 This brings me to this release’s Human Alliance features and their integration into this release. I really like this as a transforming Jazz toy. As that, it succeeds admirably and you should buy it just for that, but... 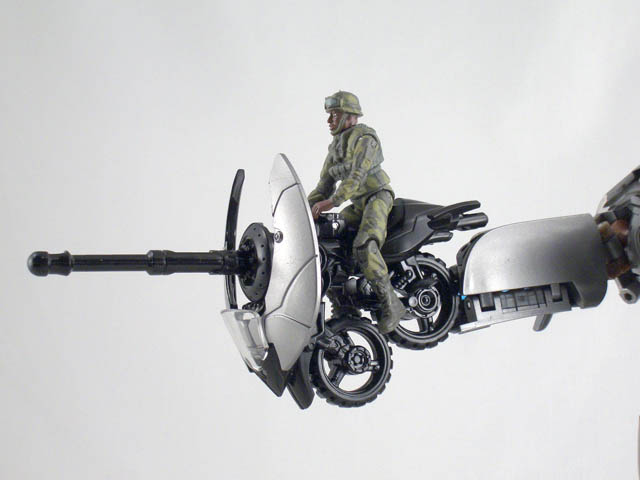 ...either they had to sacrifice integrating play features into the base design itself for Jazz's lean look or this figure wasn't originally designed for the Human Alliance line. The play features in this release just feel a bit of an afterthought this time around. 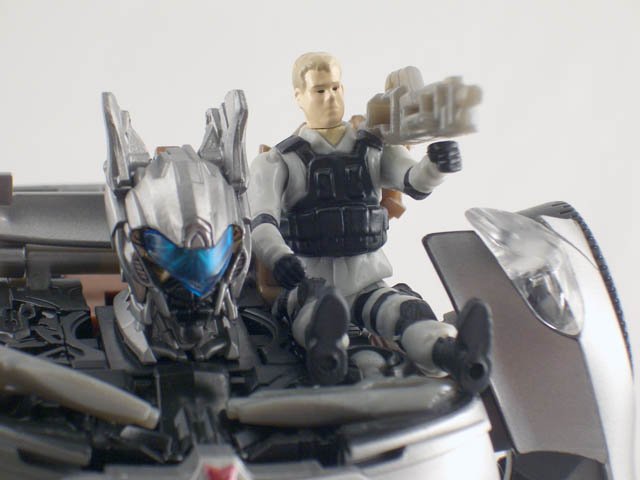 Other than riding the external blaster, you can kind of make Lennox sit on his shoulder and use the thin rod they call a gun... Sort of. 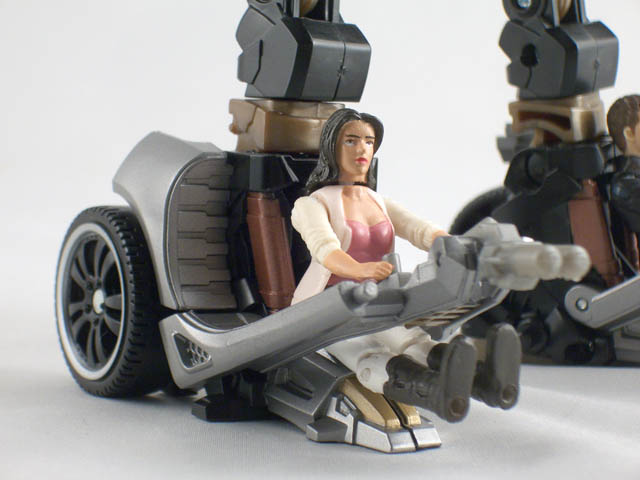 Or you can turn Jazz's feet into a makeshift set of seats to transport a figure in each. How they don't get their legs broken I don't know. 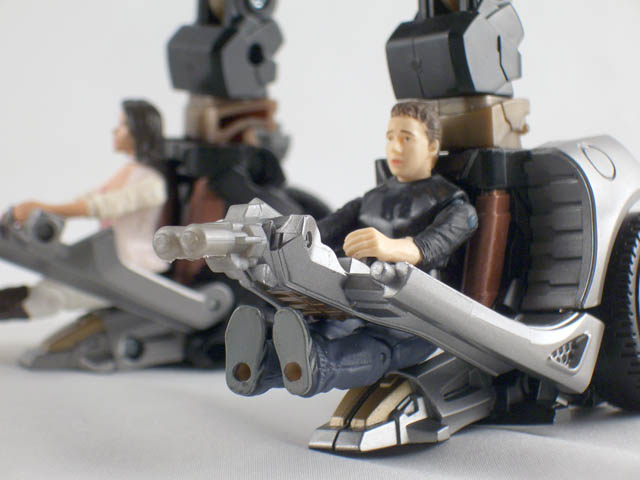 That's it for bells and whistles. 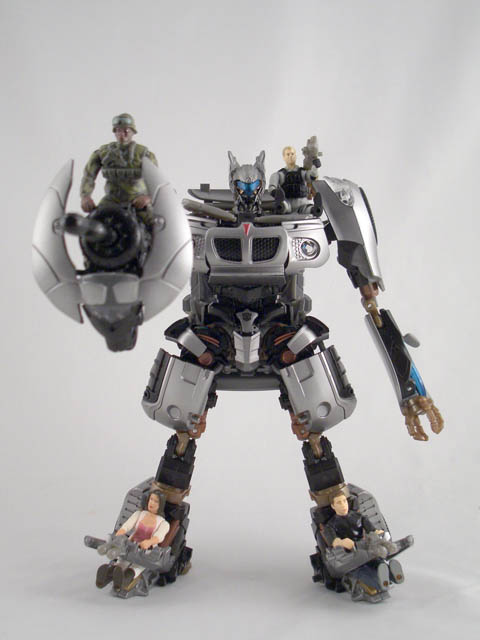 The included Captain Lennox rounds out the core cast of Human Alliance scale film characters more than adequately. The paint applications are neat and clean and sculpt detail is fairly generous for a small figure like this. Articulation is in the neck, shoulders, hips and knees. 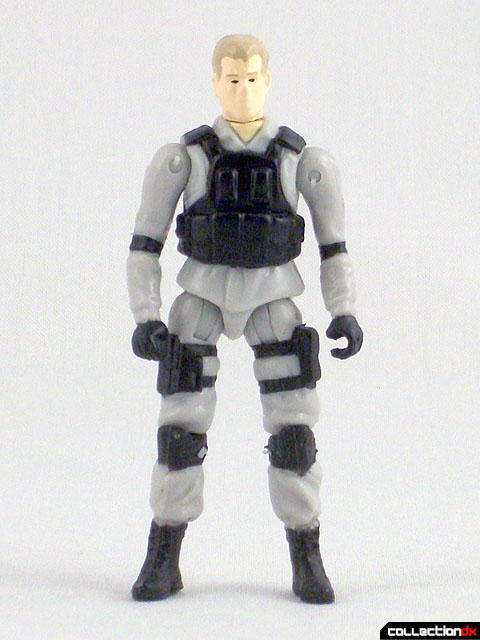 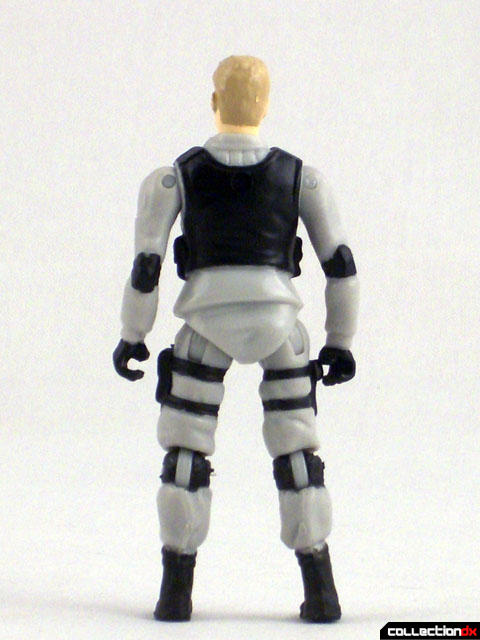 Despite my slight disappointment in the caliber of the play features and the obvious seams in car mode, this release more than makes up for it as a highly detailed and posable Jazz toy. The external blaster gimmick isn't really to my liking, but I think many kids will enjoy the extra vehicle and missile firing action. Well worth picking up if you like the robot design. 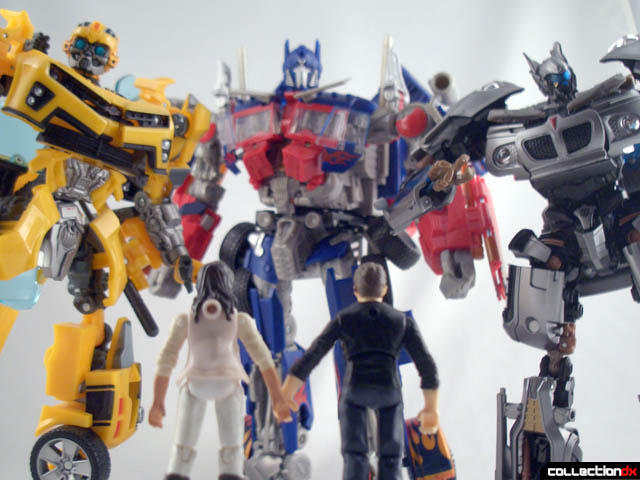 The toy design for Movie Jazz shouts out Super Go-Bots based on it's coincidental aesthetic. I'm not sure whether or not if it's a happy accident. Either way, it's an interesting thing to point out.

I wanted this guy but couldn't find him and I'm not going to pay any insane online markup.

Im a fan of Jazz but that isnt the reason I'm liking this release...its because its actually one of the best looking figures from the movie in my opinion. While it doesnt spark any memories of the classic white #4 Jazz, I love that they still hinted at him with the blue visor. I love that visor feature. My only real complaint is those hands which remind me of those boardwalk games where you try and grab a stuffed animal. And yes, I also see the super Gobot resemblance the way he looks standing there. Great Review Atom, I will have to keep an eye out for this one.