Everybody has a weakness when it comes to collecting. There are literally tons of reasons why we gravitate towards certain things we collect. Sometimes to the point we find ourselves hording a certain figure. For me, nostalgia ranks high on my list of reasons. As a child, my mom would occasionally bring home lots of small, mostly plastic robots. This is how I came to know the Orguss Orgroid, Macross Valkyrie and many others. Some were Taiwan knockoffs since she worked near Chinatown NYC. So while all the kids had Optimus Primes, Gobots and Voltrons, I had obscure Japanese toys which probably, unbeknownst to me at the time, made me much cooler than them. This specific toy, planted the seed of my Japanese robot curiosity so it is very important to me. Probably one of the most important I own. The figure in this review has merged my nostalgia with obsession. In my quest to complete the little missing/broken pieces on my loose specimen, I came across a variety of versions and knockoffs which made restoring this rather difficult. Difficult in that I was looking for an "authentic" specimen. In other words, I wanted to keep it authentic to the one in my possession. Sure the knockoff pieces were good enough, but I would not stop until I found the exact same version. End result: I own no less than 20 of these in my quest for completion. Obsessive? Yes. This review applies to all versions since they are all literally the same. I am using a boxed version and my loose original for illustration. Please welcome my plastic weakness....Irongear. 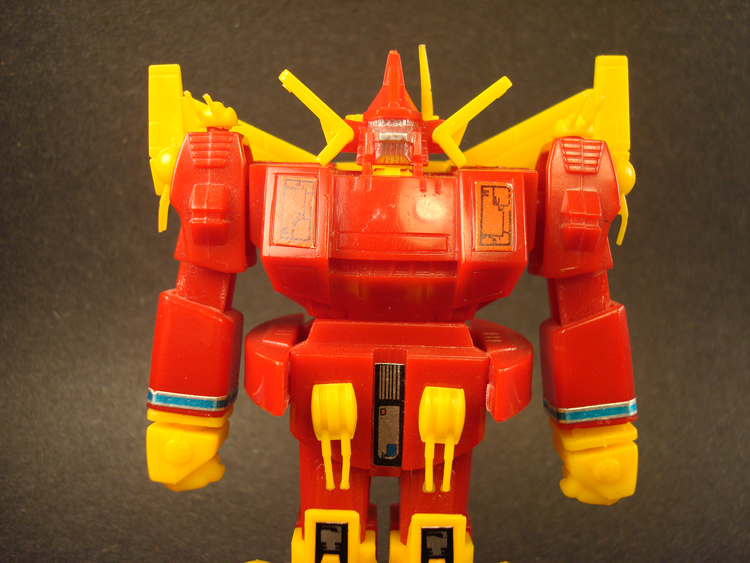 Here is the box most come in. 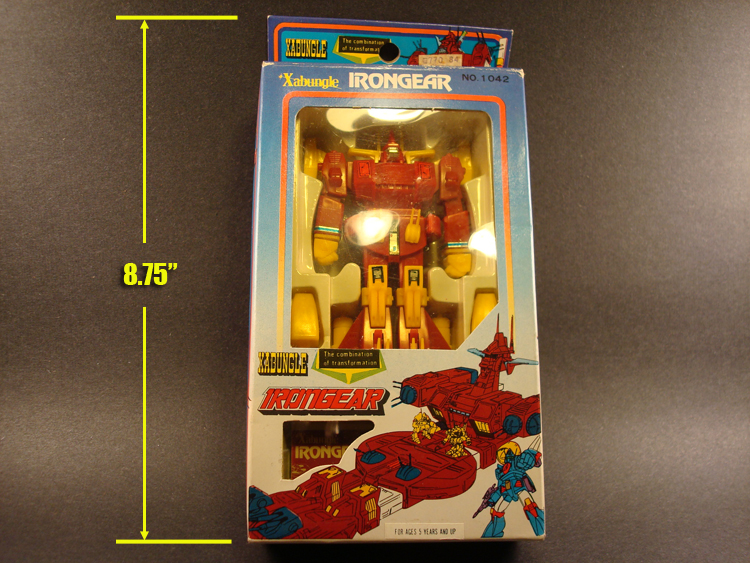 Once you pull the box off, you find the figure neatly laid out in a vacu-formed tray. The figure lays in the middle with his missile accessories to the side. The bottom part has a slot where a collectible cardboard Xabungle card resides. Beneath this card you will find little gun turrets that you attach to Irongear. 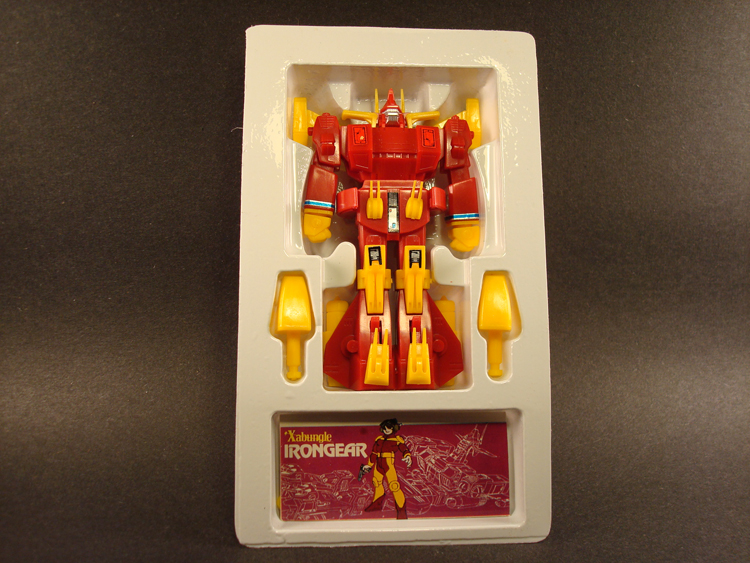 Once he is freed from his tray, you will notice he looks like a small brick. Essentially he is a bit of a brick since the only articulation lays in his arms. They only swing around. No side to side head movement, no elbow joints (sort of.. they compress for transformation) and no leg movement whatsoever. The red plastic is sturdy hard plastic, while the yellow is a flexible type. Look at how proudly he stands. 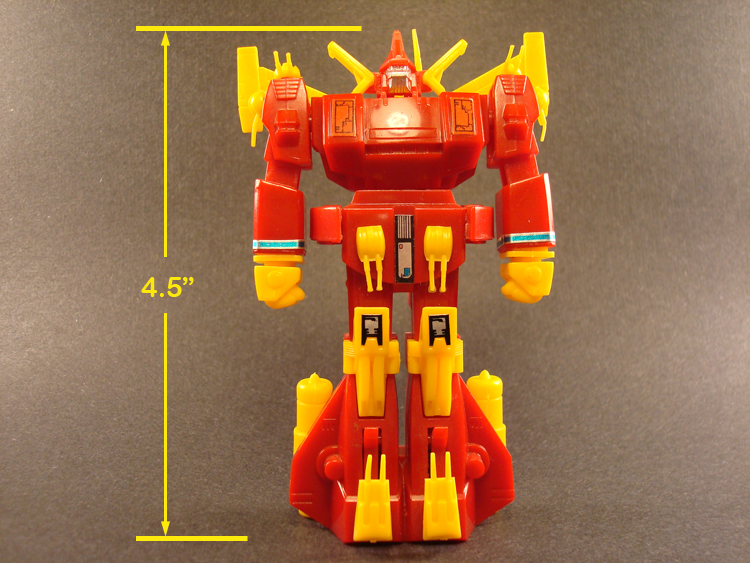 Nothing too exciting to be seen from the side profile. Those tanks on the side can be removed. Turrets are tension fitted and can be rotated. More often than not, the turret barrels will snap off or bend when trying to turn the turrets depending on plastic condition. Care is needed especially if you have huge hands like me. 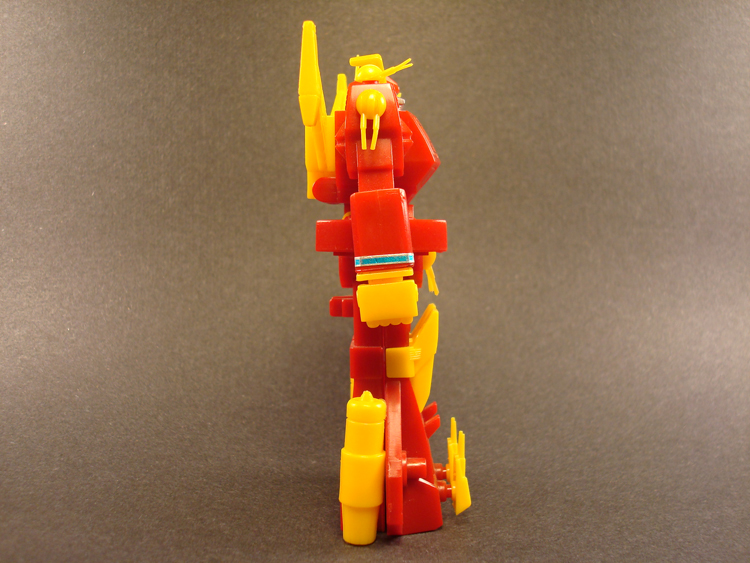 Here, you can see the back profile. The figure is held together with metal screws. For such a cheap "throw away" toy, this was made to survive. It's remained firm after all these years. 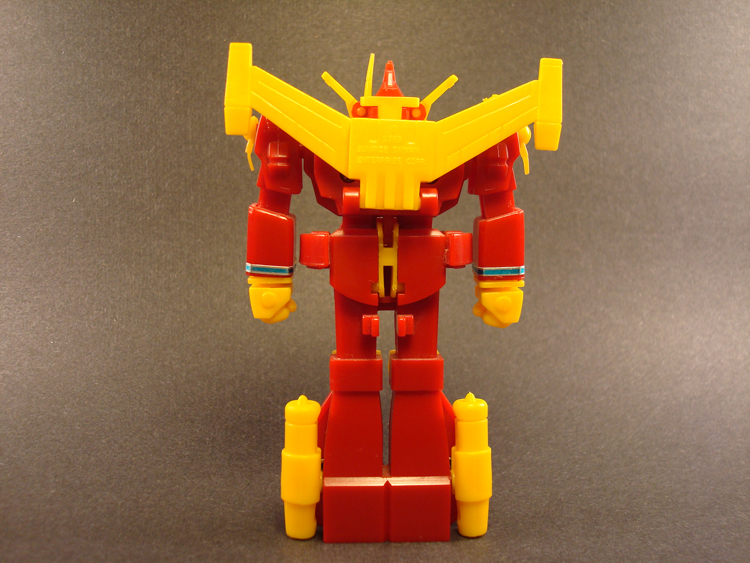 I am very happy that this figure was engineered to transform. Its not much of a transformation really as all you really do is split it in half. More specifically, you pop the hinged upper body off, split the legs apart, push the forearms in, remove the fists, lower the wing, swing the leg turrets around, insert the missiles, pop the neck up and straighten out the "ears". 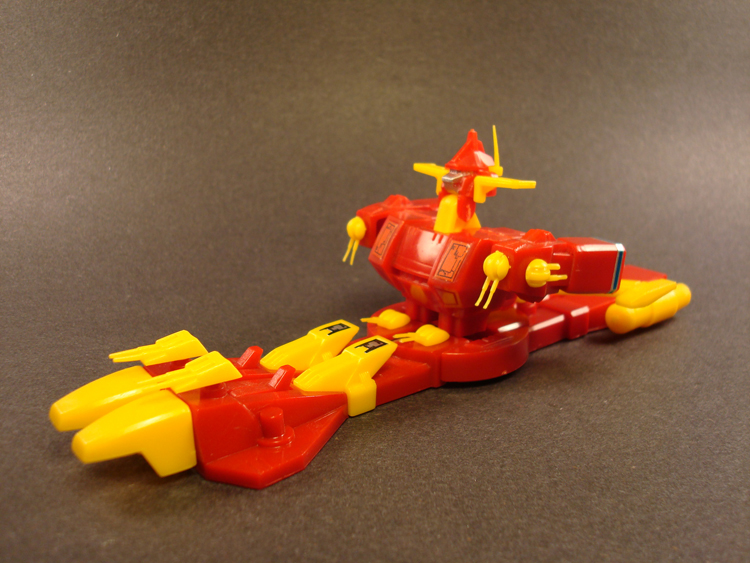 Although the fists don't shoot, he has missiles that do. They are pretty strong. They shoot much farther than any modern toy can since it was cool to shoot people in the eyes in the 80's til some baby complained about losing an eye. He now uses his eye patch to his advantage. Chicks dig pirates, it's a fact. ARRRGG 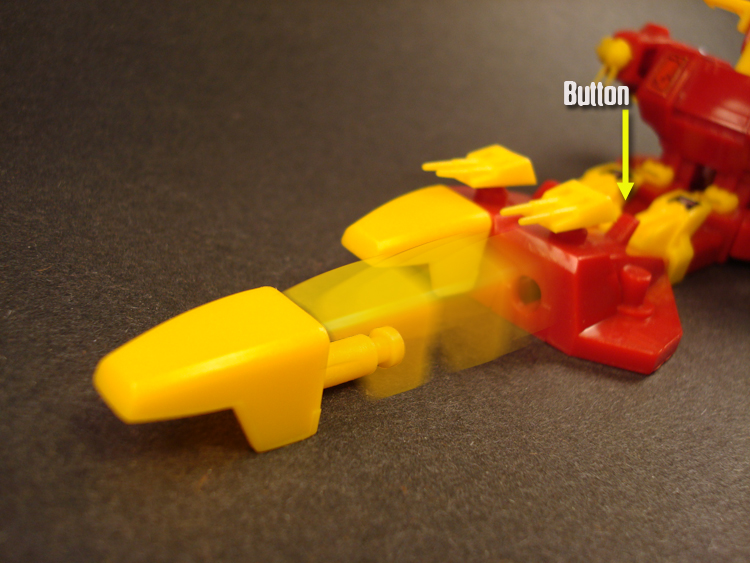 What makes mine different from the others? Although made in Taiwan like the others, my figure is stamped with the Sunrise copyright while the others bear no such stamping. Here you can see the stamping I am talking about which is missing on the other 20 versions I own. Otherwise, they are IDENTICAL in every other way except for minor sticker variances and packaging. From my research, it seems that it is made by a no name company but retains a Sunrise Enterprises license not unlike the Taiwan Daitarn 3 release. 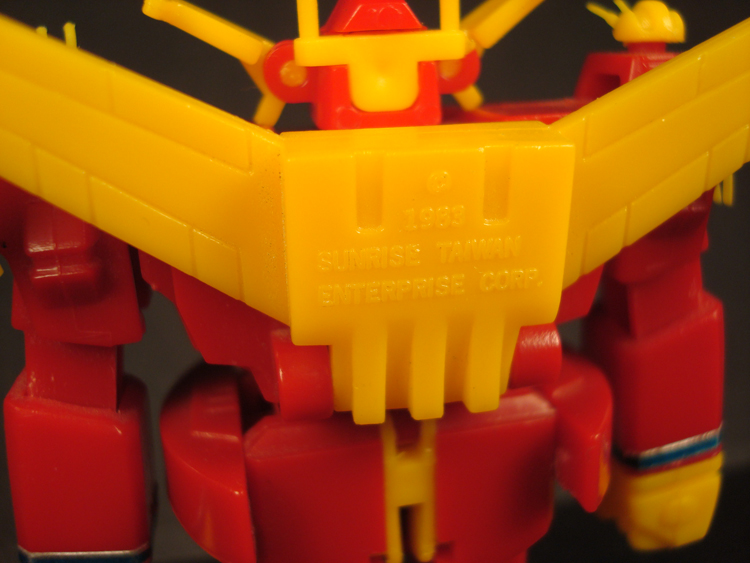 Just for fun, here is a size comparison with his SOC big brother. 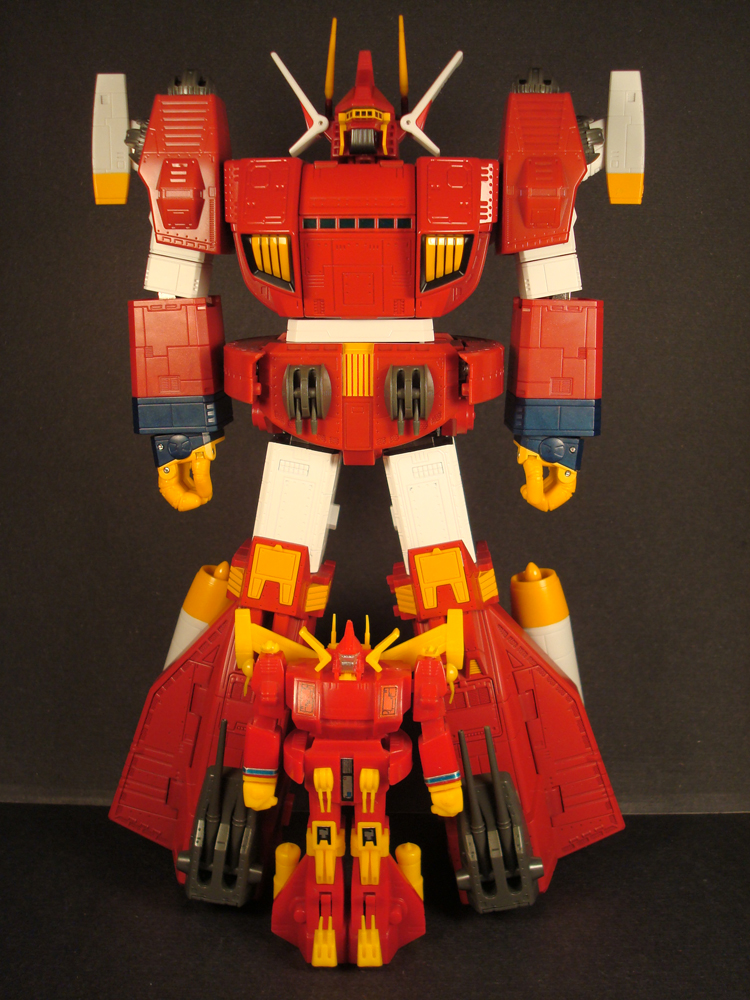 I felt this little guy needed his time in the spotlight since he was so instrumental in starting my obsession with Japanese robots. Which figure started you on the way to collecting? The answers are probably very varied depending on your age and what toys you came in contact with as a child. Everyone has their own little story. So will I continue looking for the "elusive" complete Sunrise version? Probably not, I'm exhausted and broke. Besides, mine is pretty much intact aside from a broken antenna and bent/missing turrets, so I've decided to just pull the pieces I need off one of the other identical versions and be happy with that. These can be found rather easily on eBay all day long. So give one a shot, but beware..... BWAHAHAHAHA

9 comments posted
Have. I also managed to get

Have. I also managed to get one for my son. Solid toy one of my favorites. Nice pics. I like the missile firing shot. Oh, Its tough to point to one toy that started my love/sickness. But I definetly remember trading a G1 loose soundwave for a soltec round facer. The trade was with my cousin who's father took him to Mr. Bigs toy land. Although I've never been there, I'm happy to have something from that legendary store!

I'd love to see a picture of all 20 of your specimens!

Thanks with sharing the origin of your obsession with us.
Since you asked, the toy that started me on my way to collecting Japanese robots was the GA-09 DX Raideen chogokin. My dad got it for me when I was little, in either '78 or '79. Other toys came and went, gained or lost my interest, but that one, and its jumbo version as well, were the ones I kept for the longest time, rescuing them each time my mom went to clean out the basement and throw away the old toys I had. Once I got to college, there was no one left to protect him, and she tossed it finally.
It's odd, too; I didn't really know much about the show or anything related to it, I just loved that robot.

I couldn't really nail down ONE particular toy that got me interested in Japanese robots,since I got a bunch of Gobots and grocery store "Convertors" and such right around the same time. I think Cy-Kill and Road Ranger were my favorites,but I hardly remember anything about being 4,let alone order of toy purchase.

I remember having one version of this robot. I thought it was very good and really liked it's space cruiser look, also the launching system shot the missile very far away (yeah, it achieved eye popping velocity). What was really funny about it was that everywhere they sold this thing, it always had two right fists, never found one that had the correct left fist in.

Great review, brings back a lot of memories.

I had this as a kid, it was one of the many bootlegs I got at the Deerfield Fair. I remember the big question as a kid - what the hell does this turn into? A torso on a sled?

THAT'S what that is! I have that! I mean, I probably have a bootlet version, actually. Got it for my birthday years ago...sometime in high school. Friend of mine knew I liked random robots and he got me that and a Xabungle (which happened to be the same Xabungle I had back when I was a little tyke, so my friend somehow managed to get something really special to me on accident).

Anyway, the transformation on Irongear is so simple that I always thought I was doing something wrong! That is so cool; I haven't seen this thing anywhere (though, I never looked for it). Geeze, that's a blast from the past.

I had been looking for a cheap complete version of this guy for a while since I too had him as a kid. This past weekend, at a comic shop in Mass, I found one in a baggie for 5.00 with extra parts enough to built a second one only missing the feet missiles. one of the fins even have the sunrise stamp you mentioned, I wouldn't have noticed if not for this review. One has a extra sticker on the chest that identifies it as BAT-L from the Bi-Trons. I think my old one had that sticker as well.Anyway great review and nostalgia trip man!

Had this and the Xabungle. I always thought Xabungle was a knockoff Voltron and this was a knock SDF-1! The toy that started my robot obsession was Giant Acroyear. Then I got the Shogun warriors. Then the Matchbox Voltron was the catalyst for giving in to thw voices Acroyear and the Warriors stared up.