Hot Toys has been setting the standard for 1/6 scale detail, articulation, and finish, as well as licensed figure quality for a few years now.  After gushing over the last couple of Shellhead releases, I thought it’d be interesting to take a look back at one of the earliest Hot Toys Iron Man figures, especially now that a revised re-release is on the way.  Plus, I realized I had all the photos ready to go and had forgotten to ever write this review.

As a little bit of backstory, the MkI was my first Hot Toys figure, and the thing that initially sold me on the first Iron man movie.  When production shots and teasers began popping up, I was excited for Robert Downey Jr., but not a huge fan of the main red and gold suit design.  I have never been a fan of Adi Granov’s slim and sleek suit designs, and the movie suit was designed in part by him, and very closely resembled the armor in the comics at the time, which I also was not big on.  Then the first teaser trailer hit, with the Black Sabbath song, that heavy drumbeat, and the shot of the MkI in action.  I was smitten.  The attention to detail, the grittiness, and the smart updating of the original comic tropes all hit for me, and I knew we were in for something good.  I also knew that no normal action figure was going to satisfy my lust for the MkI design.

The movie came and went, and I saw it many, many times, and bought every toy Hasbro released.  Then I started hearing about this little company called Hot Toys, and when their painted sample shots were revealed, I began to really pay attention.  At the time, I was mainly buying Yamato Valkyries and Scopedogs, so paying over a hundred bucks for a single toy was (worryingly) nothing new, but I did not collect 1/6 scale toys, and wondered if the figure could possibly be as good as the previews indicated.  Still, I bleed red and gold, and heard that Hot Toys figures typically sold right out and then only got more expensive on the aftermarket, so I knew I had to take the plunge and preorder.  Looking back, it was the start of a very expensive endeavor, but was absolutely worth it. 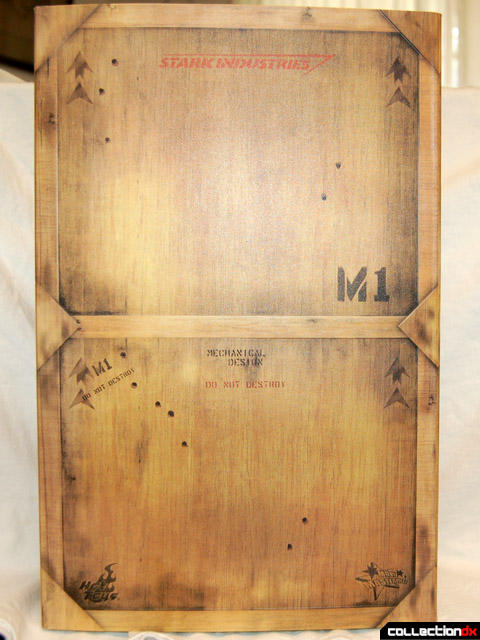 The first thing that floored me was the box and initial presentation of the figure.  The MkI came in a foldout box with a slipcover.  The cover is heavy card painted with textured paint to look and feel like a wooden weapon crate from the Ten Rings’ cave.  An unnecessary but awesome touch. 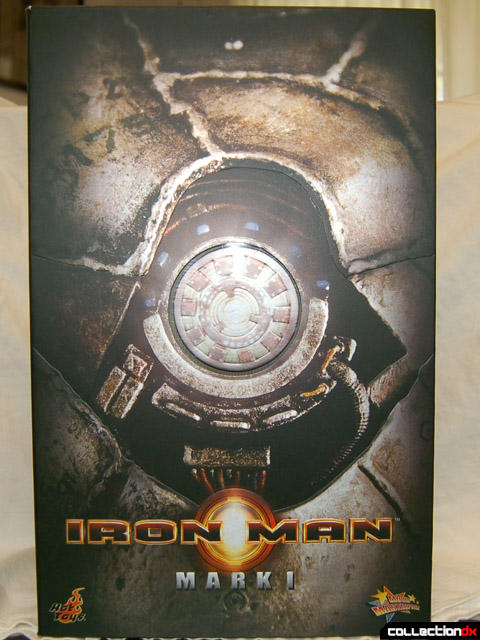 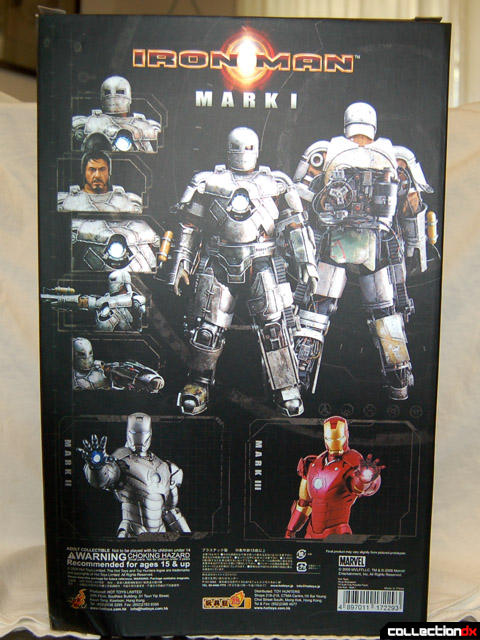 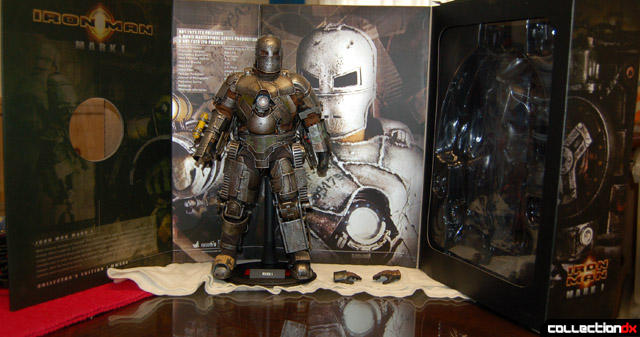 Inside was a gorgeously printed (but not yet foil shiny iridescent) box featuring shots of the toy and the ‘big production’ presentation Hot Toys has become known for.  This figure was a big deal, and the box made sure you knew this.  Accessories included just a couple of hands. 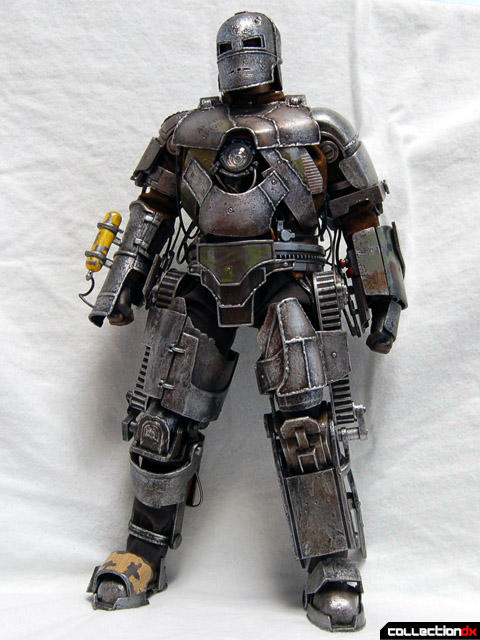 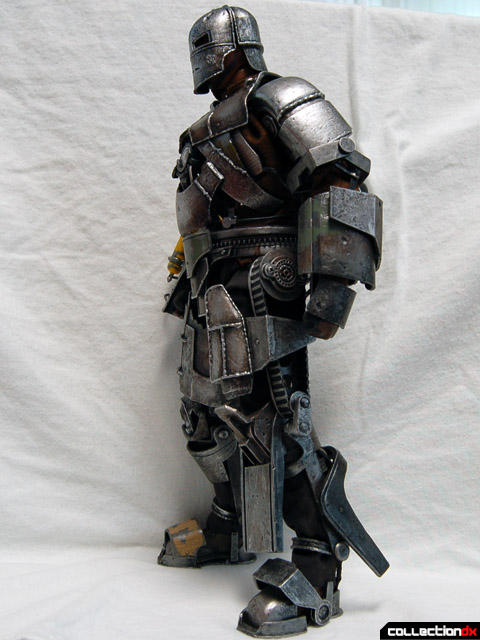 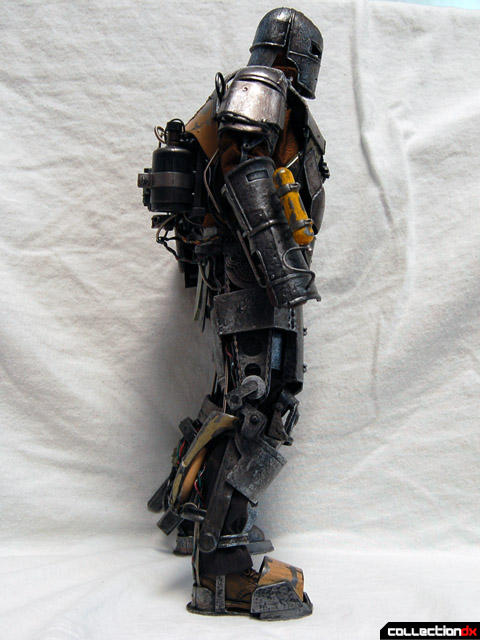 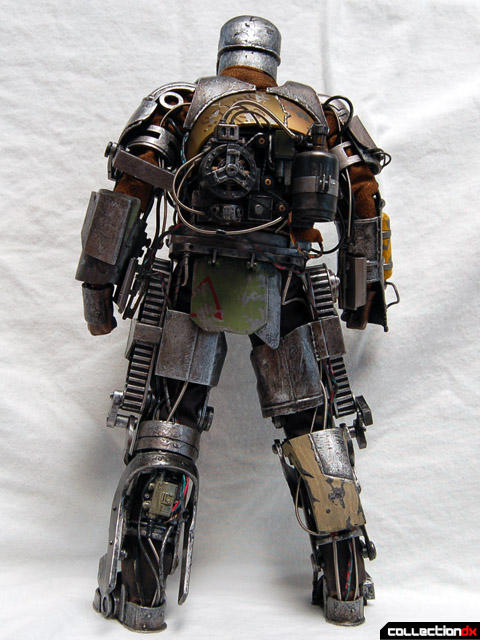 Iron Man stands a hair over twelve inches thanks to the armor, and immediately strikes an imposing look.  One thing that has always bugged me is that the ankles are a little loose, and Iron Man will tip over if not balanced correctly.  It is pretty easy to use a little super glue to tighten up Hot Toys’ double-ball ankles, though.  Shellhead here has molded boots with the socket, and no feet inside the boots, so it is extra easy to fix. 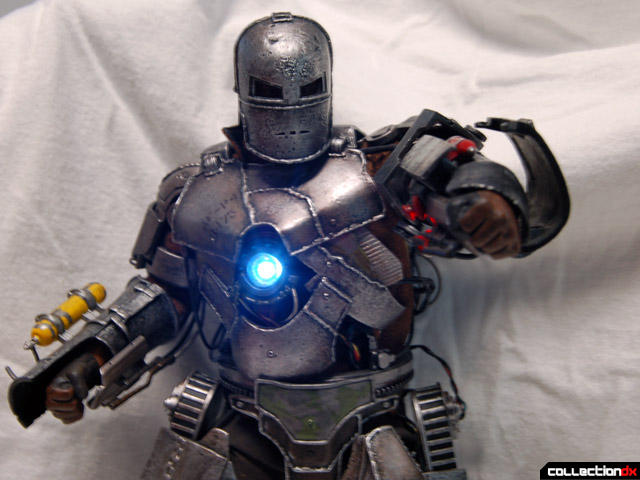 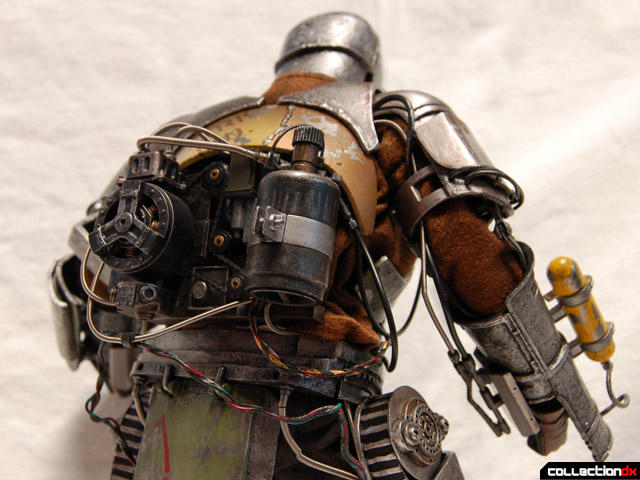 Just standing there, this guy oozes detail.  Everything is fully painted, and the weathered finish is impeccable.  The armor and the welds feature one of the most convincing metal paint jobs I have ever seen, and it is something I have spent a great deal of time trying to emulate when painting myself.  There are lights in the chest arc reactor and the activation light on the wrist-mounted missile.  Both are blindingly bright and further enhance the authenticity of the figure. 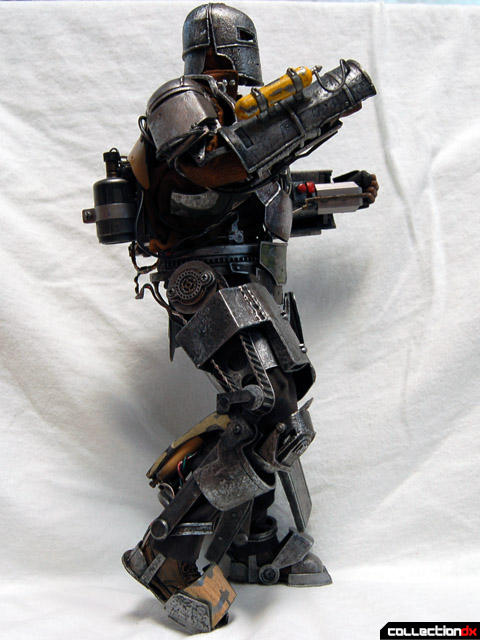 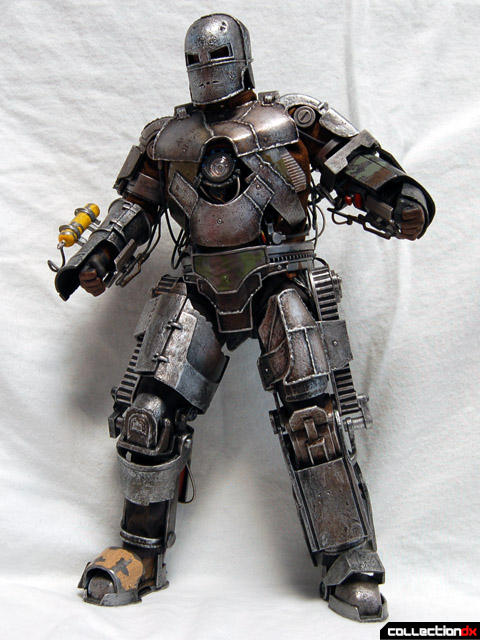 This is a Hot Toys figure, so in addition to being incredibly well detailed, it is also extremely posable.    Obviously the design of the armor limits movement, but within those restrictions the articulation is great.  Hot Toys did a good job of making parts of the armor move, and figuring out clearances between parts to allow the figure to do almost everything the practical suit in the film did.  Another thing worth pointing out now is that the armor does not feel fragile.  The suit is pretty lightweight to avoid ruining the figure’s already tenuous balance, but it does not feel cheap, and has held up to years of handling without a single problem.  Certain areas like the exoskeleton around the elbows are specifically not fixed to any other armor parts in order to allow them to move with the figure, instead of accidentally breaking when you try to do something you shouldn’t. 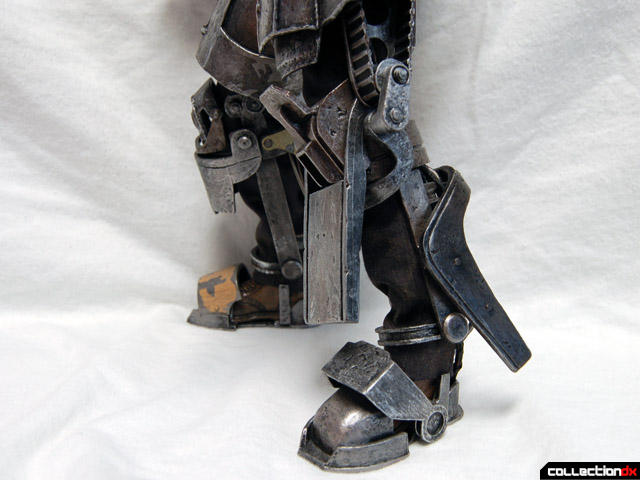 The other thing this figure captures incredibly well is the complex and layered look of the MkI.  There is a full normal person body underneath there, wearing the leather coat and pants that Stark wore to keep from getting torn apart by the suit.  Looking back, there are some inaccuracies about the costume, especially around the neck and collar area.  In the movie, Stark an additional neck protector piece that is missing, and there is a little bit of overall inaccuracy about where the chest plate sits around the neck.  Considering the complexity of the design, I’d say it is fine, but we have come to expect no compromises from Hot Toys, so it will be interesting to see how revised this area really is on the re-release, if at all. 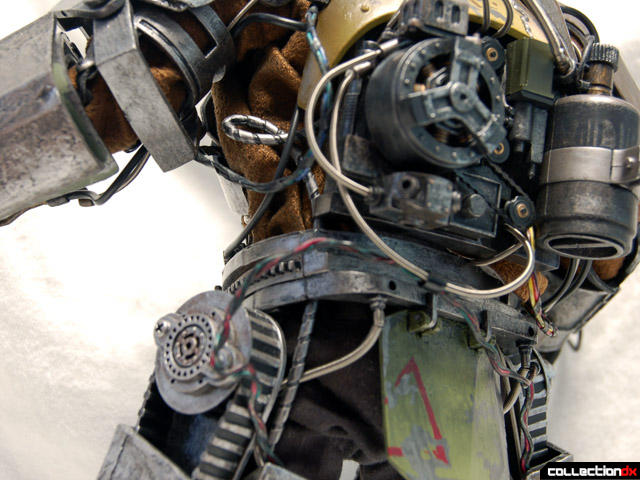 The suit is also festooned with wires, cables, and hoses, most of which are fully painted.  These are a combination of metal spring wires and PVC or rubber wires, and feature a great finish, including details like black electrical tape holding bundles of wires together.  I honestly have never been able to figure out how or where some of these wire parts are glued to the suit, but none of them have ever come loose or broken. 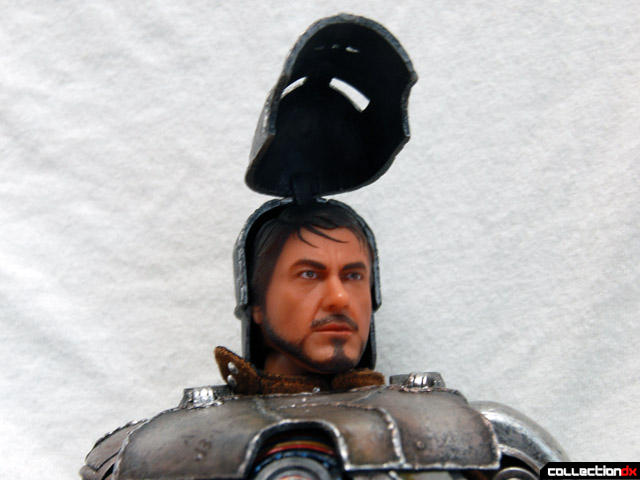 The mask raises like it did in the film, revealing the weakest part of the toy: the headsculpt.  More than anything, the headsculpt reveals the age of this figure when compared to more recent releases.  The likeness is weak and doughy, but more importantly, it is not fully painted.  The pinkish fleshy plastic color is what really kills the face, and appears to be the thing most heavily revised on the re-release.  That said, it is still a face sculpt that blew away most of what other companies were releasing at the time, in both detail and paint work. 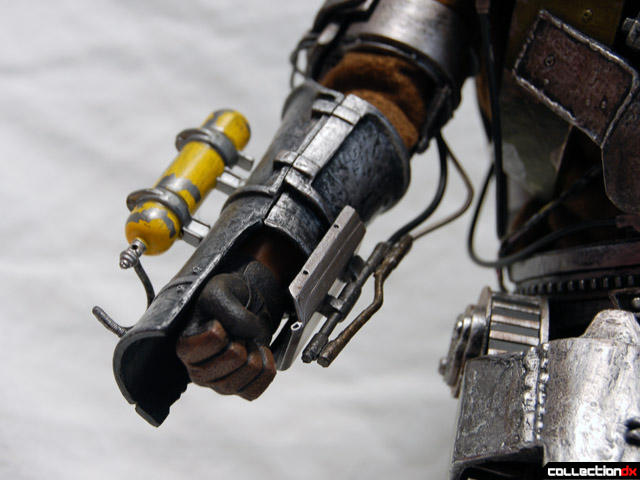 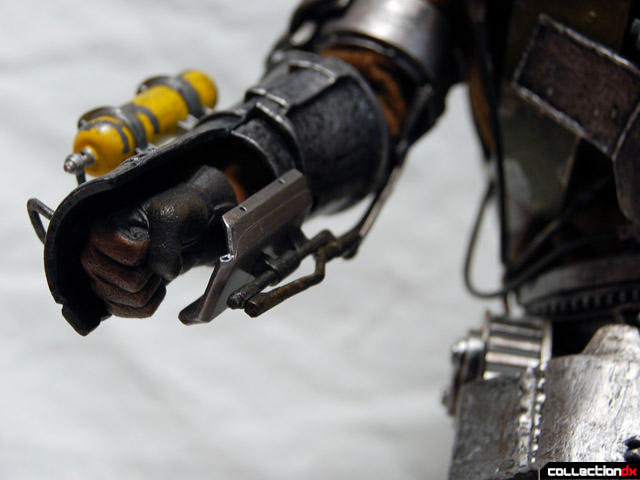 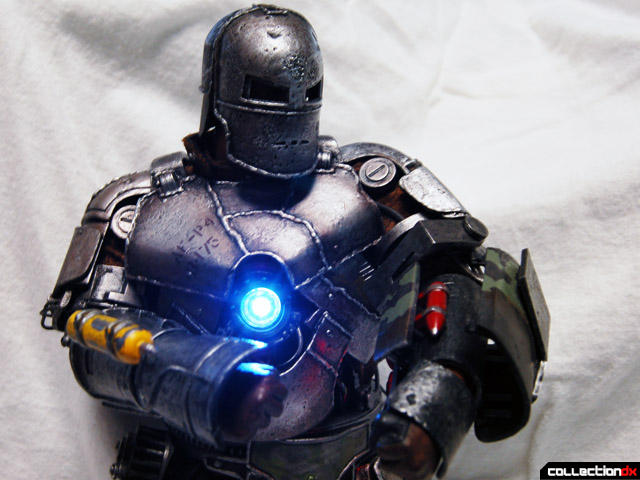 Action features include the deployable wrist missile on the left arm, and flamethrowers that slide into place on both arms. 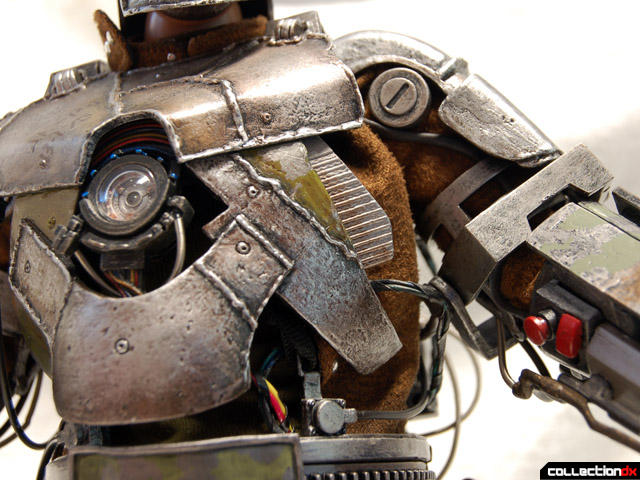 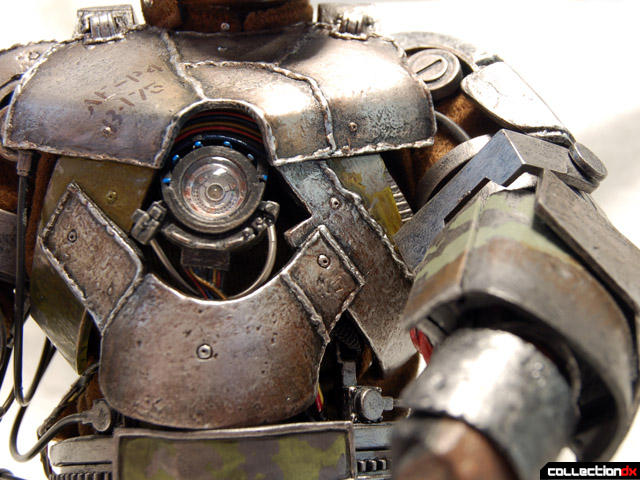 There is also a spring-loaded panel on the chest that moves to allow further arm movement. 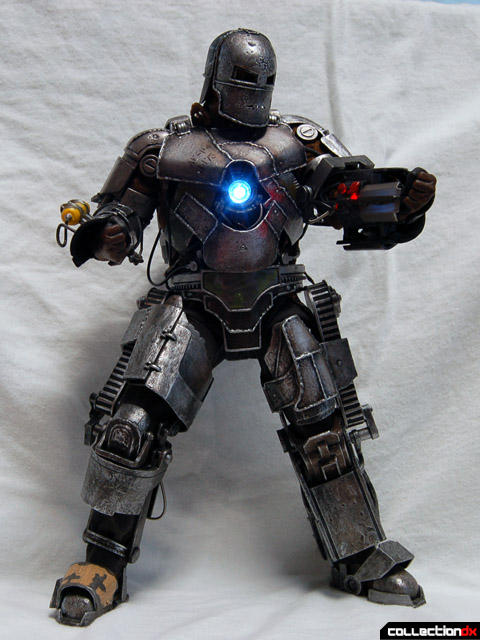 We’ve got detail, articulation, and engineering, and all that adds up to a figure that really captures the built from scraps look and imposing menace of the first armored suit Stark builds.  In motion, you can practically hear the servos whining and taste the dust as Tony tries to escape with his life. 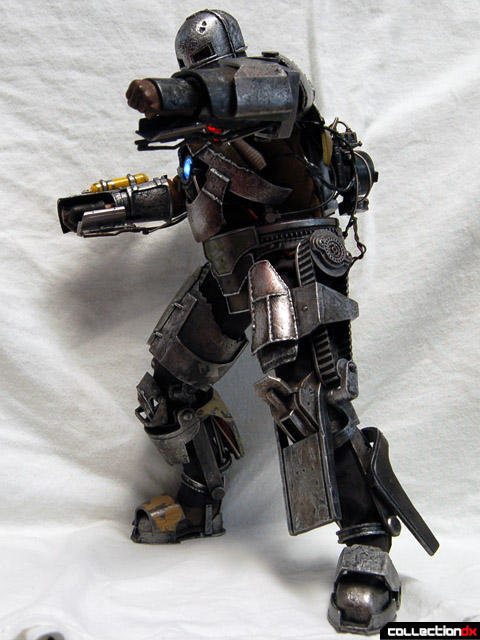 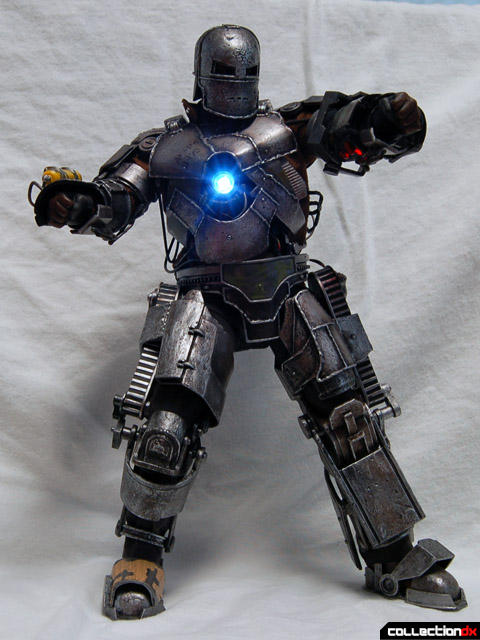 This figure cost me $170 when it was released, and it was worth every penny.  If you look past the headsculpt, the first version Iron Man MkI still holds up today and looks the part alongside other Hot Toys Iron Man figures and 1/6 scale figures in general.  It is nearly impossible to find for a reasonable price now, so any newer Iron Man fans, or fans that missed it the first time should not sleep on the reissue.  Looking back for this review, I think this might still be my favorite of the HT Iron Man figures.  The last couple of shiny suits from the second film were incredible, but the attention to detail and playability on this figure still amaze me.

Who? Or what, is the newest, most breath-taking, most sensational super-hero of all?

A smarmy American in an iron lung.